In this stunningly subdued rustic-modern farmhouse, a pared-down approach proves that less really is more, even at Christmas.

It’s a fitting comparison, considering the Weerts, including their children—Robine, 13, Antoine, 16, and Gerjan, 19, are from Holland. “I brought a lot of the pieces over when we emigrated,” notes Diana of the move a decade ago. “We were farmers back there, too, with a huge old house. I love furniture and design, especially when it’s a mix of country, rustic and modern.”

The family also shares their sofas with four dogs and two cats. And Antoine has two Galloway cows (the only pets in the household that don’t get lounge rights on the sofa). A barn nearby houses 100 Holstein dairy cows. 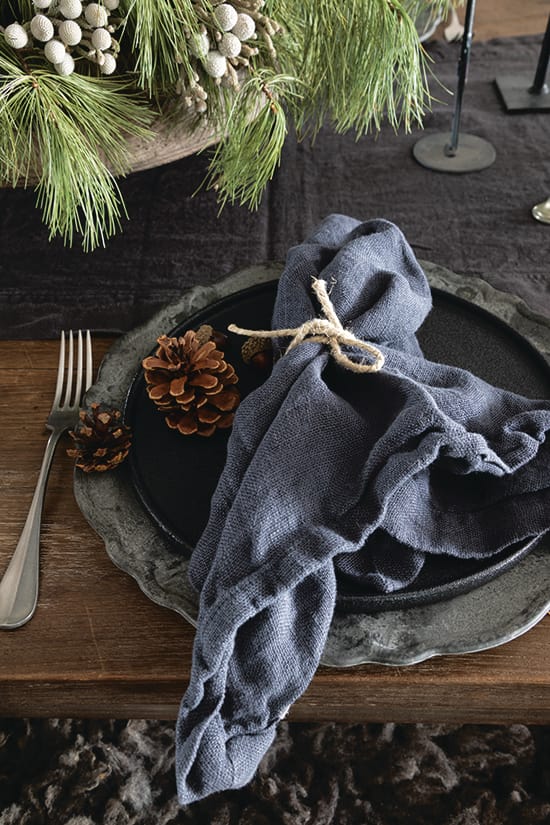 Despite having no formal training, Diana herself devised the interior look for the open-concept bungalow, with help from Whitechurch Contractors.

“I actually hate bungalows,” laughs Diana, “No matter how old or new, I don’t like that they’re flat and low but if you find a farm you like, you go for it. You can always renovate the house.”

That was the case when the Weerts moved to Bruce County; they lived on another farm for five years before snagging the 3,300-square-foot house in 2015. “It was badly dated,” says Diana of the two-month-long renovation. “The floors, kitchen cupboards and vanities were all honey- oak wood, and the layout was crowded and boxy. Everywhere you turned were small rooms, walls and doors.”

Such visual clutter deprived the two-bedroom house, which was built in 2000, of natural light. “The living room only had one window,” recalls Diana. “We’re in a pastoral setting with lots of beautiful fields, so it was a shame to block the view.”

So she rejigged the layout to capture the farm’s scenic landscape, demolishing walls for a better, sleeker flow. She also added hefty wood beams to trick the eye into thinking the farmhouse is of a much older vintage. “The beams are for decor only. I bought them off of Facebook Marketplace,” says Diana, whose love of design started early.

“My mom was always painting kitchen cupboards and sewing curtains. As a child, I painted little curtains on the windows of my Lego house with Wite-Out—that made my brother nuts.”

Fast-forward to this house, where Diana custom-mixed the paint, but not with stark white. “White reflects the snow, making you feel cold,” she says. “I used Pure & Original’s fresco lime paint to give the walls a warm, velvet look. Moody colours make a home cozier, especially in winter.”

Come Christmas time, Diana’s love of cozy spaces extends to the way she decorates for the season. Sheepskin rugs casually slung over benches and chairs make for a warm ambience, as well as pampered seating that not only pleases the humans but the pets, too. 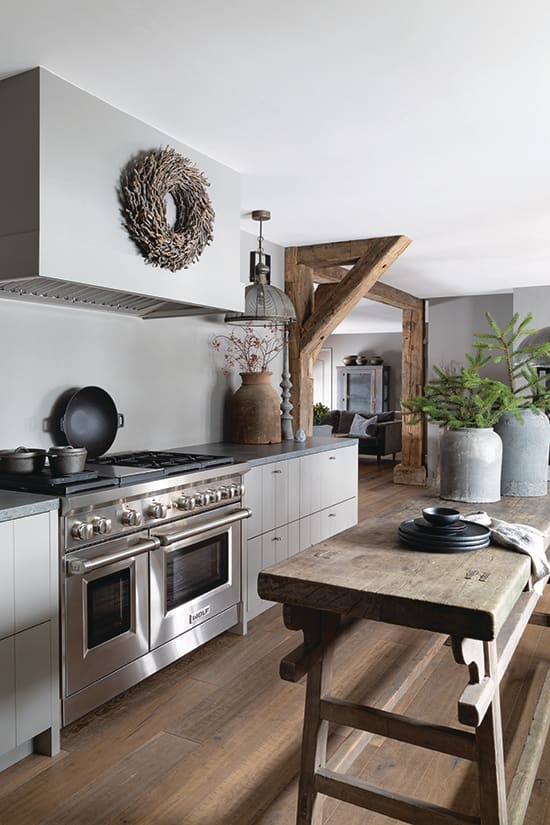 From the concealed hood vent to the flat-front cabinets, the kitchen’s lack of ornamentation has a muted elegance. A texturally rich wreath from Holland quietly signals the season. Evergreen branches are a happy splash of colour tucked into the two heavy concrete vases that Diana brought back from Holland. 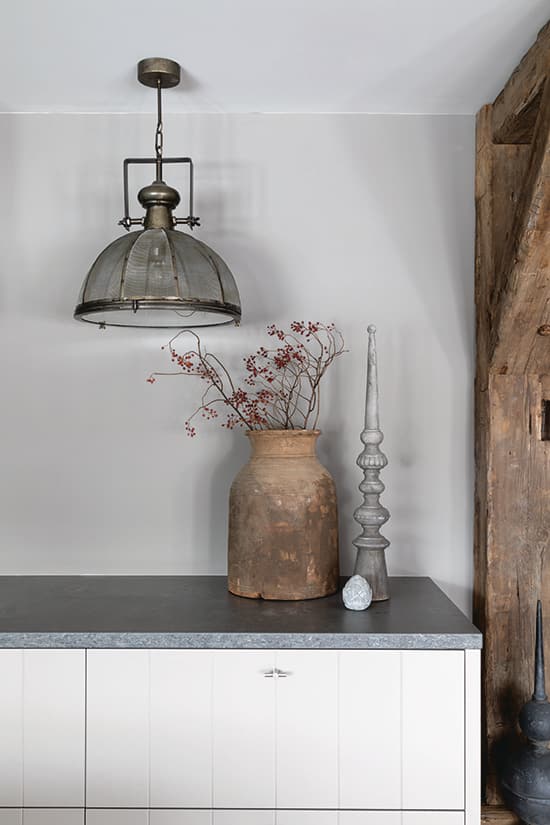 The painterly composition speaks to Diana’s pared-back style. Though plain, the interest arises from the varying shades, shapes and textures found in the tall concrete finial, concrete ornament and wooden vase. 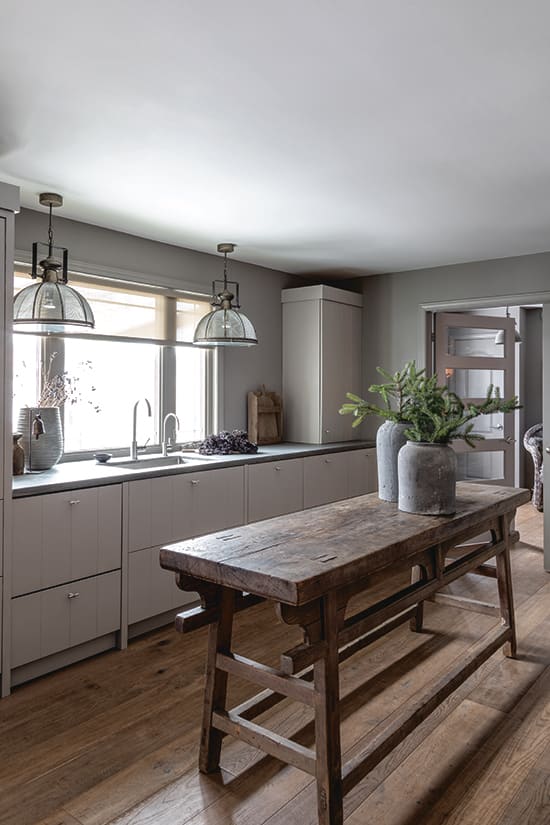 Diana originally wanted an island but the space was snug; adding the sawhorse-style table evokes rugged, natural beauty in the kitchen. “It’s one of a kind because it’s very long,” says Diana. “I love antique furniture. I like a mix of furnishings. Many of the pieces were brought over from Holland and have been in the family for years.” 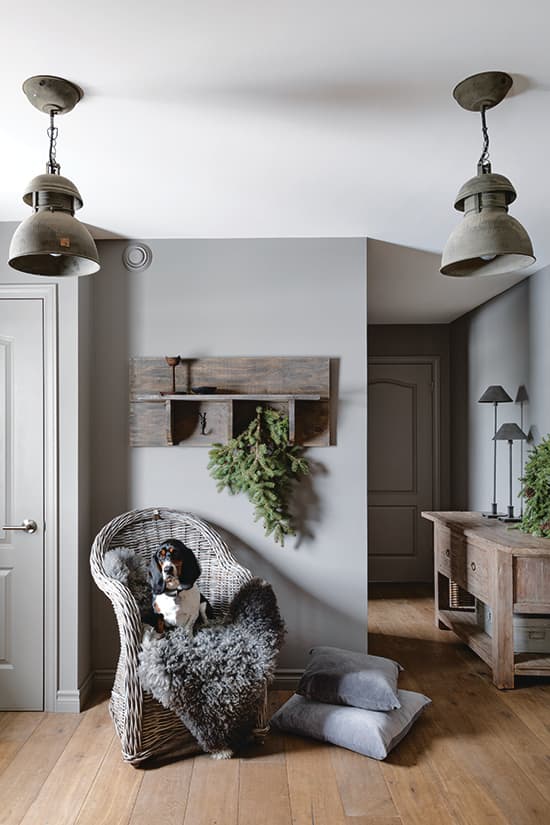 Clutch, the Basset hound (one of the family’s four dogs), is an adorable welcome in the patio’s entryway. “I designed the shelf, which my son, Gerjan, made when he was 13-years-old,” says Diana. Barely there branches befit the serene scene. 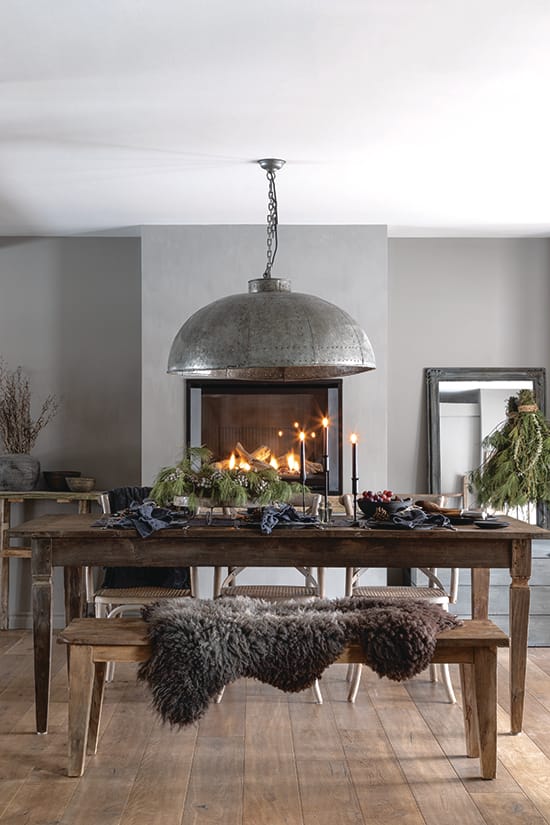 Laden for a feast, the black ceramic tableware and wispy Christmas greenery (note the large knot of greenery draped on the mirror!) is earthy and eye-catching. A prominent pendant from Restoration Hardware is a showstopper that anchors the scene. “We put in the propane-burning fireplace for warmth and coziness,” notes Diana. “The kitchen is our favourite place because there’s a big patio door on the right, where two windows let in lots of light.” 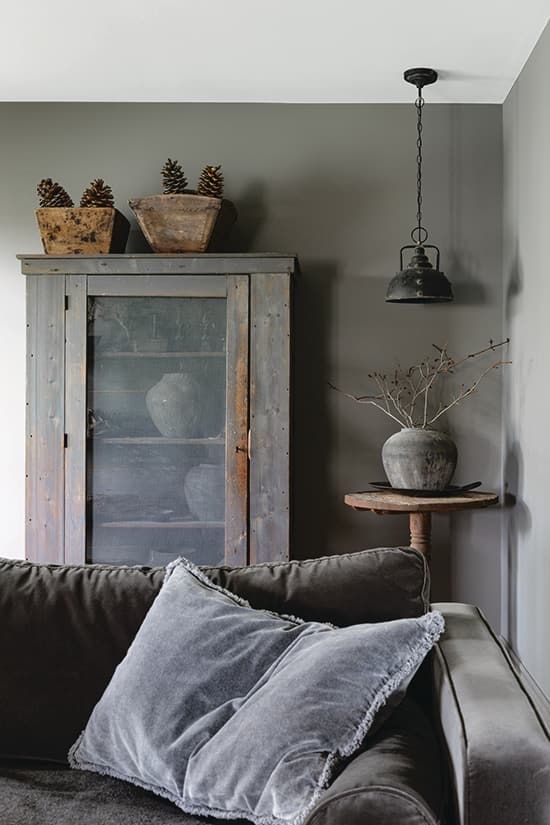 Some of the family’s treasured keepsakes from Holland are shown here. The beautifully worn cupboard behind the sofa is an antique food pantry. The wooden baskets on top are old Chinese grain carriers and the table is a wooden wine pedestal table. 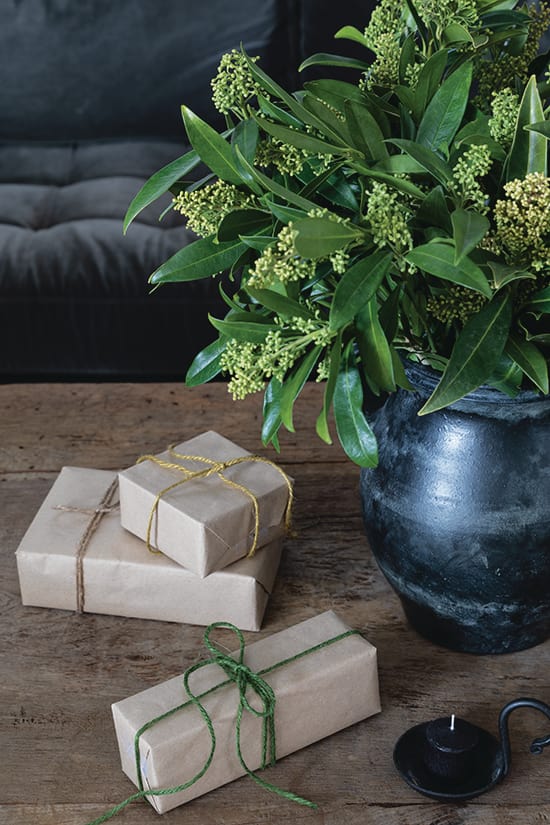 Kraft paper and raffia string are a simple solution to wrapping gifts when you’re allergic to traditional Christmas colours. 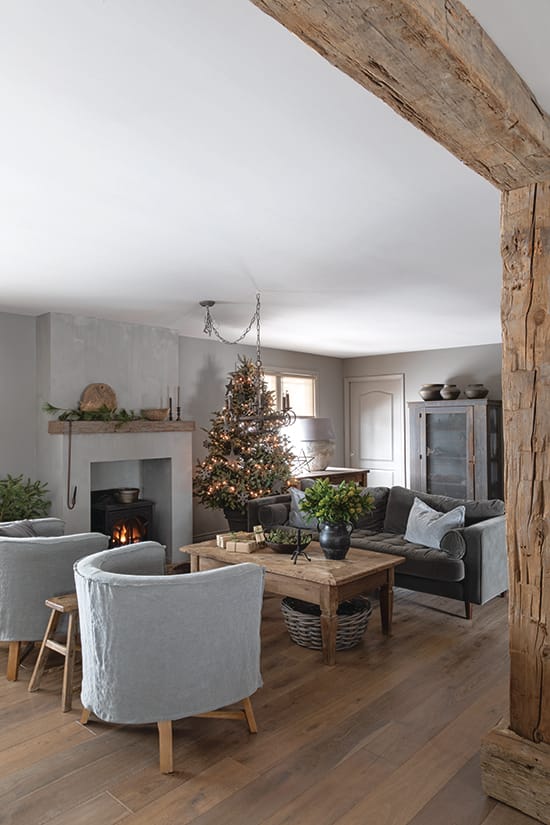 Made for snuggling, the gorgeously grey living room features generously-sized bucket chairs and a plush velvet sofa. The Christmas decor seamlessly blends with the simple style. For a festive touch, Diana hung two bells on a cutting board. 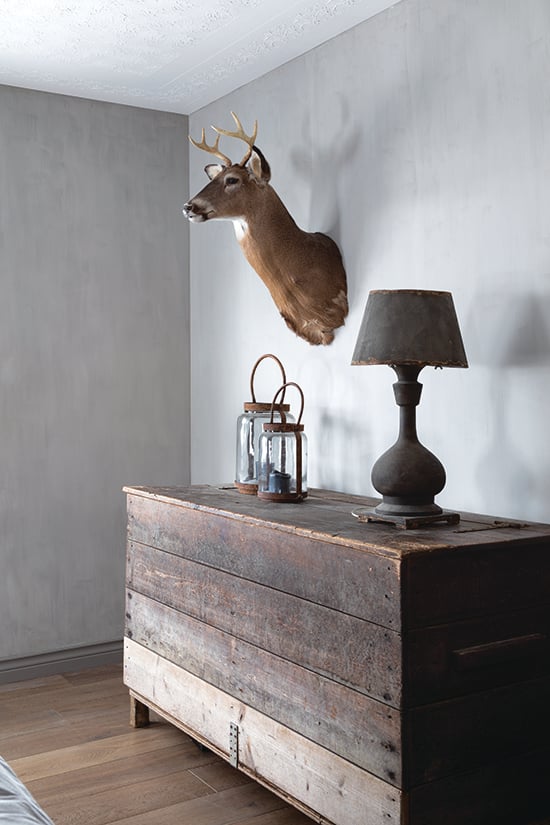 “We accidentally hit the deer on the road and we thought it would be a nice way to honour the animal,” says Diana. “The dresser is a really old piece of farm equipment used in Holland to store livestock feed.” 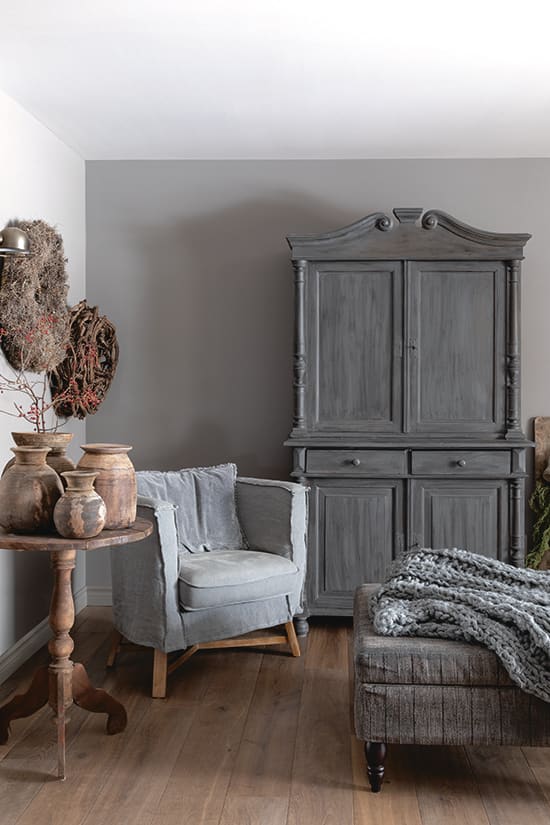 Throughout the home simple ornamentation—a solitary wreath from Holland pinned over the hood vent, a Christmas tree proud in natural hues—makes it feel festive but not fussy. “If I put up glitzy green and red ornamentation it wouldn’t suit the calm, rustic decor,” says Diana. “And I would feel sick of it after a couple of days. I prefer greenery that I find outside, or sometimes I’ll buy some cuttings,” she says, adding happily: “I never tire of it. It stays up right until the end of January.”

Letting the vignettes have breathing room allows you to enjoy each piece, from the group of earthenware to the homespun wreaths. A radio and a television are stashed inside the traditional armoire from Holland, which is about 60 years old. “We don’t like huge TVs and electronics out in the open,” says Diana. A wooden board with bells subtly say, “It’s Christmas.”