Masculine, modern, elegant and edgy: This Calgary home is all about style but has cozy comfortable living at its core.

Tom Simons had no intention of buying this house. It was being built as a spec project by Calgary home builder Mission Homes and was halfway finished when fate worked its magic. Having collaborated with the company before, Tom was familiar with its high-quality work and wanted Mission Homes to build a new house for him and his two teen-aged kids, Grace, 17, and Cole, 14. “I came here to meet the builder about it, looked around and Tom decided then and there to buy this one.”

Even though the 4,000-square-foot house wasn’t complete, Tom liked what he saw. The space boasted attributes that went beyond spec house expectations thanks, in part, to designer Nam Dang-Mitchell, who had been working with the builder on the basic finishes – so Tom hired her to fill in the rest. “It’s nice to take a project from beginning to end,” says Nam.

“I wanted a family home that is tasteful and elegant but not ostentatious,” says Tom, who envisioned a robust mix of industrial and traditional styles with relaxed family living at its heart. “I wanted a space that could serve as both a spot for my kids to hang with friends and somewhere I could host business associates.”

The casual masculine vibe Nam created suits this anti-precious practicality. In her signature sophisticated neutral palette, Nam produced a cozy character-filled backdrop with architectural details, textural wallcoverings and rich soothing colours. White oak makes a frequent appearance in the house. “I’m in love with the flooring,” says Nam. “It’s wide plank with a natural-looking matte finish, and I just love how authentic, organic and casual it is. It counteracts the formality of the mouldings.” White oak continues in other elements, such as the kitchen island and the ceiling beams, as well as select built-ins, cabinetry and glass-panelled pocket doors throughout the home, all offering the same light and relaxed effect.

Along with incorporating a chic mix of clean-lined mid-century, contemporary, traditional and transitional pieces, Nam pushed Tom to embrace some edge with whimsical winks, such as the sculptural Kelly Wearstler light fixture in the entryway and the spiky coffee table in the living room – but he was all for adorning the dining area with the bold Popeye pop art (which he already owned). Details like this keep the sophisticated house fresh and unfussy – and family friendly.

The living room (and its adjacent study) is one of everyone’s favourite areas. “I’m in here all the time,” says Tom. “I start every day in here with a coffee and emails. Then at night, I’m here again, either working  or reading.” Cole and Grace also like to sit by the fire with their tablets, and their three-year-old Labradoodle, Tucker, lies on the sofa in front of the window to keep watch. It’s the kind of family living that feels plucked from the pages of a storybook...but a modern one with a little edge. 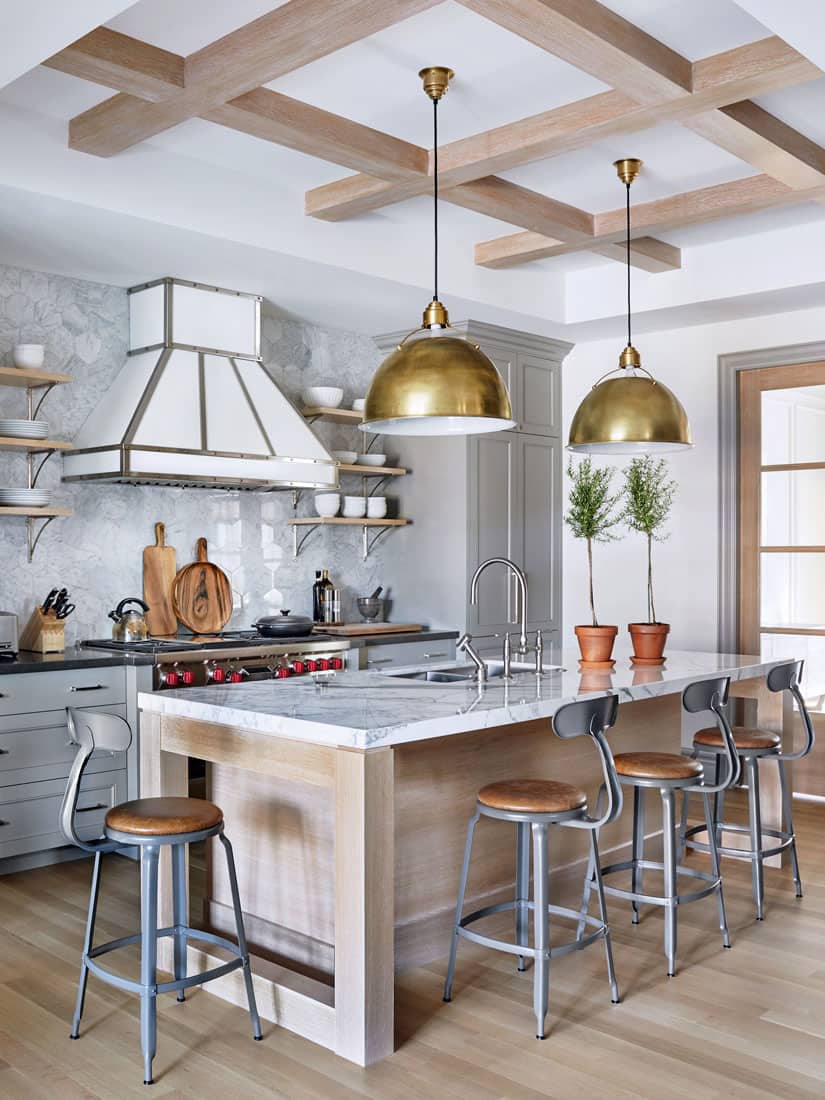 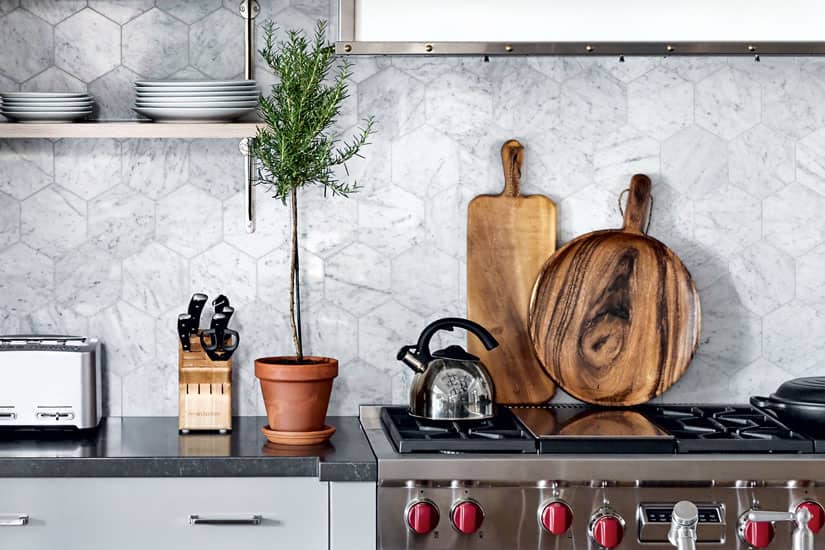 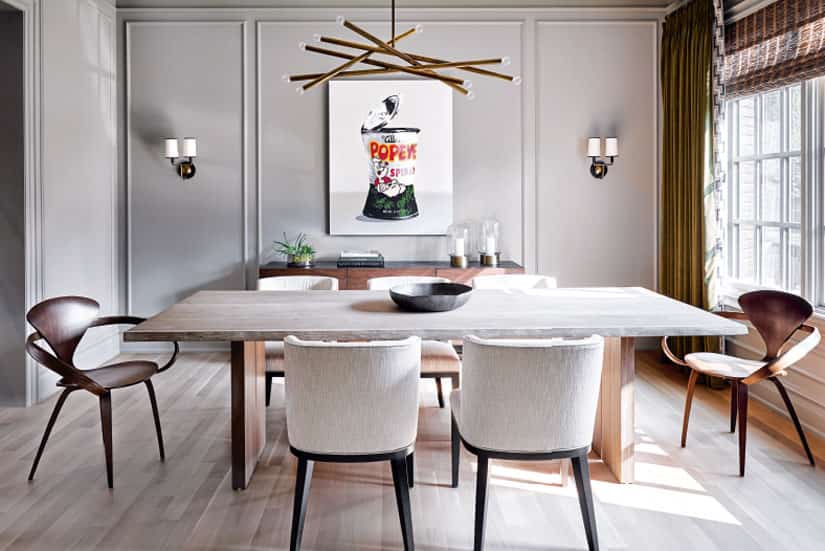 A panelled wall treatment lends classic style to the dining room, while the artwork adds personality. “I love the contrast between the Popeye painting and the formality of the wall it sits on,” says designer Nam Dang-Mitchell. 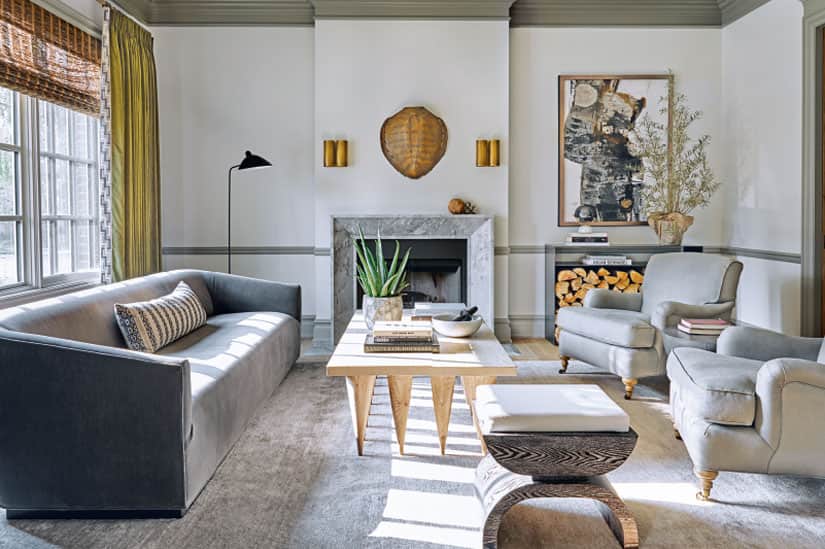 A wood-burning fireplace makes the living room Tom’s favourite place in the house when the weather gets colder. “Everyone hangs out in here,” he says. The reclaimed Douglas fir coffee table is a total conversation piece. “I love it,” says Nam. “Its pale wood tone is carried throughout the house, and its spiky legs lend a primal earthy quality.  It keeps things casual but also interesting.” 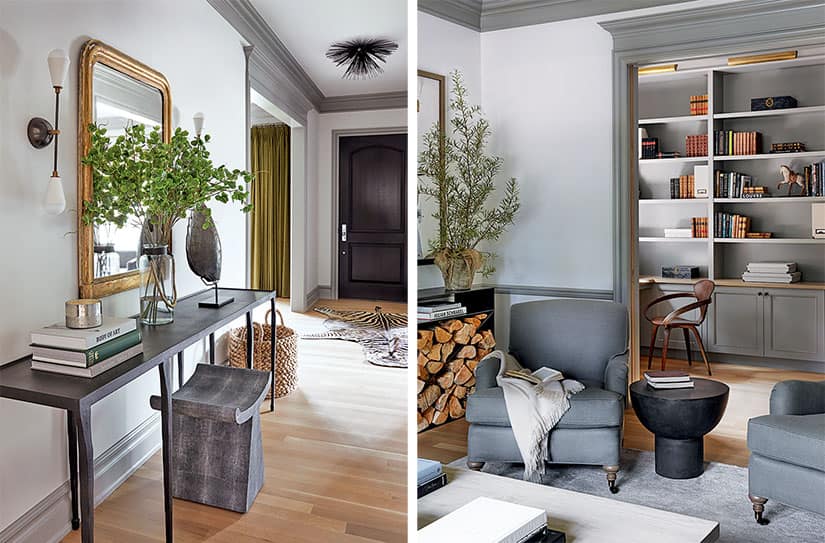 William Birch-style armchairs make for an ultra-inviting reading nook. Set on casters, they can be easily moved around to accommodate different seating compositions. Homeowner Tom Simons’s office is just beyond the doorway, allowing him to be close to his kids when he’s working and they’re hanging out. 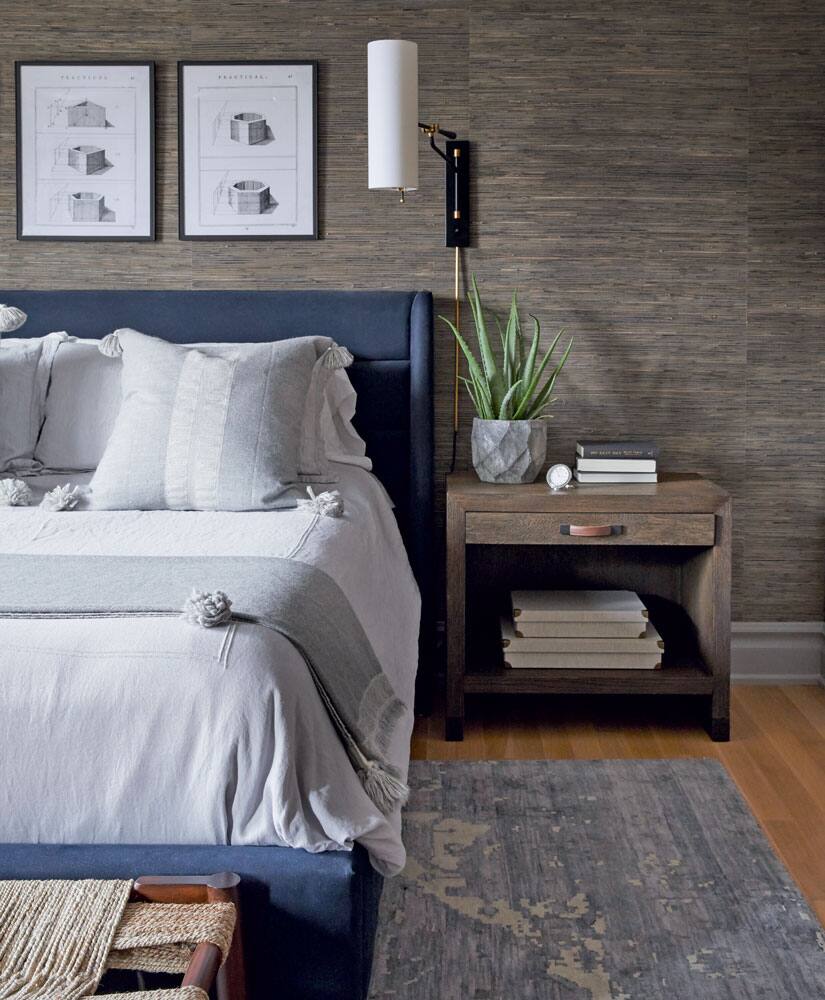 Aspects like the upholstered bed, dark grasscloth wallpaper and textural woven bench give the master bedroom a super-cozy vibe. “It feels like a hotel suite,” says Tom. 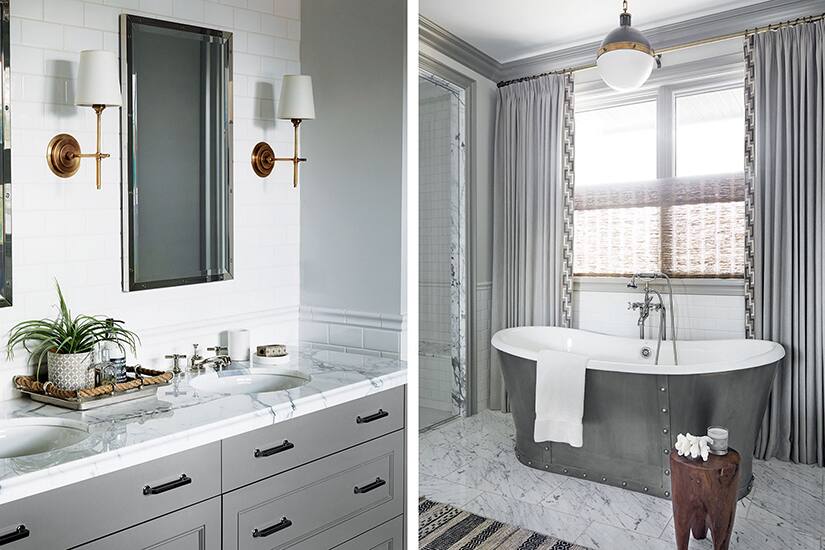 The free-standing cast iron tub with a  riveted stainless steel skirt is the star of the master bathroom. With its French bateau style, it’s at once classic and industrial. Elements like the floor-mounted tub filler, marble flooring and subway tile wainscotting lend oldworld charm. The grey linen drapery, layered over woven blinds, has a softening effect. “And because I like to add something organic to every room, there’s a tree stump side table,” says Nam.

Industrial elements give an edge to this traditional home