Nature's colours are rich and deep in British Columbia's picturesque Fraser Valley. Rolling mountains hold every imaginable tone of green; the western sky and rushing Vedder River radiate shades of blue, from cool silver to deep lapis blue. So it should come as no surprise that decorator and colour expert Maria Killam decided to make this vibrant area home.

Unlike its natural surroundings, however, the house that Maria and her wife, Terreeia, purchased in April 2011 was anything but colourful. "It was a boring three-bedroom bungalow that had been built in the '80s," she says. "It was very dated with lots of beige, brown and oak everywhere." If the couple was going to settle down here, Maria knew some serious changes had to be made. The wooden mouldings had to go, and the flooring, a mix of carpeting and three kinds of laminate for flooring, had to be updated. This included getting rid of the oak kitchen cabinetry and brown railings around the sunken living room.

It took a rather frenetic two months to rid the house of these mood drainers, but when it was done, the interior was light-filled and much more au courant. Now, colour is everywhere, and even on the dreariest days of West Coast drizzle, the home emanates a sunny shade of happiness. 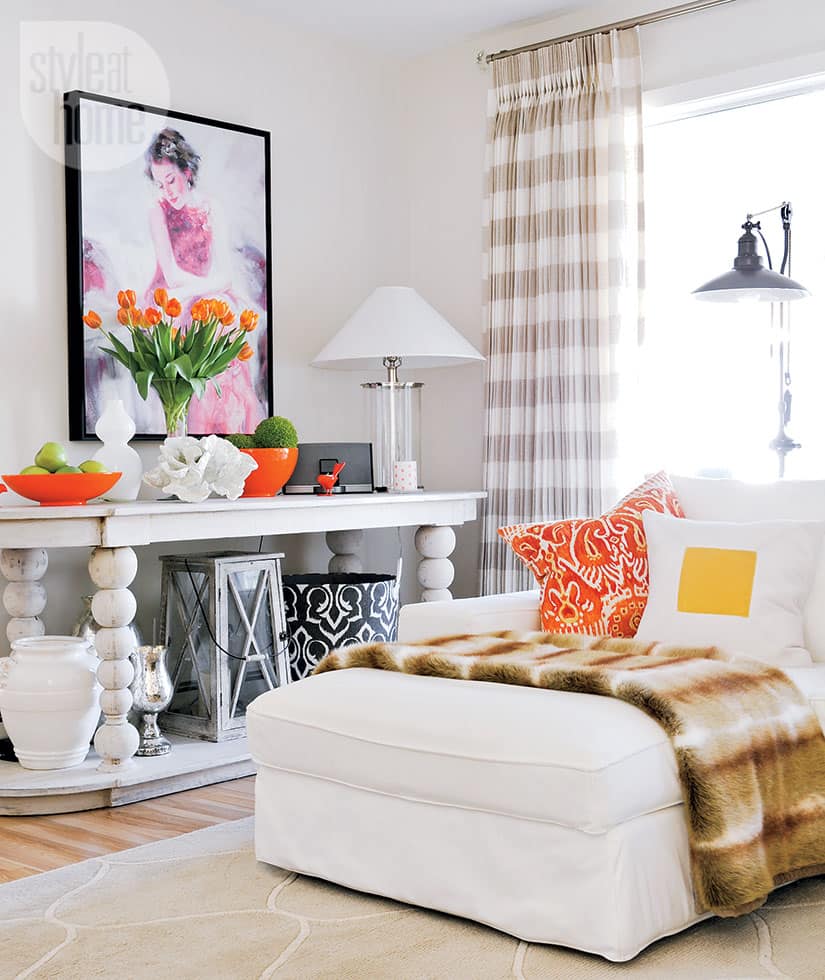 The family room is covered in light neutrals, but it's the citrus accents that really make it shine. 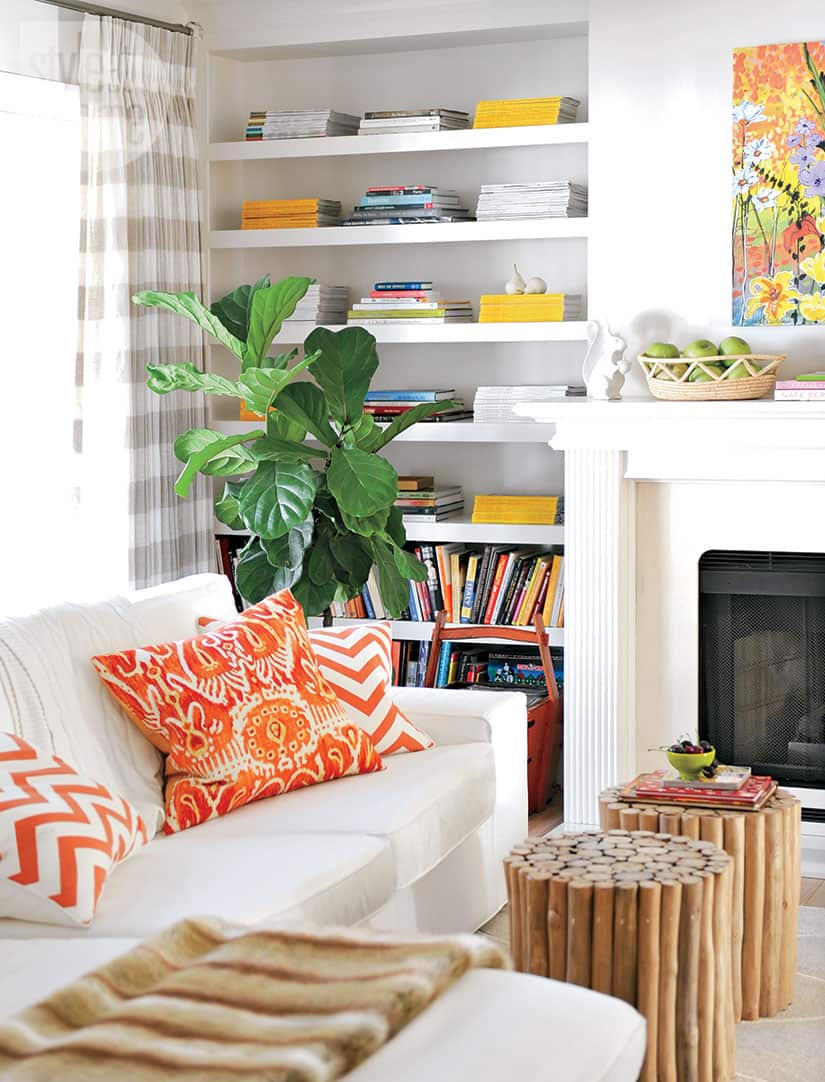 The family room features layers of orange, yellow and green on a soft white backdrop. "The toss cushions were my jumping-off point for the room's scheme," says Maria. 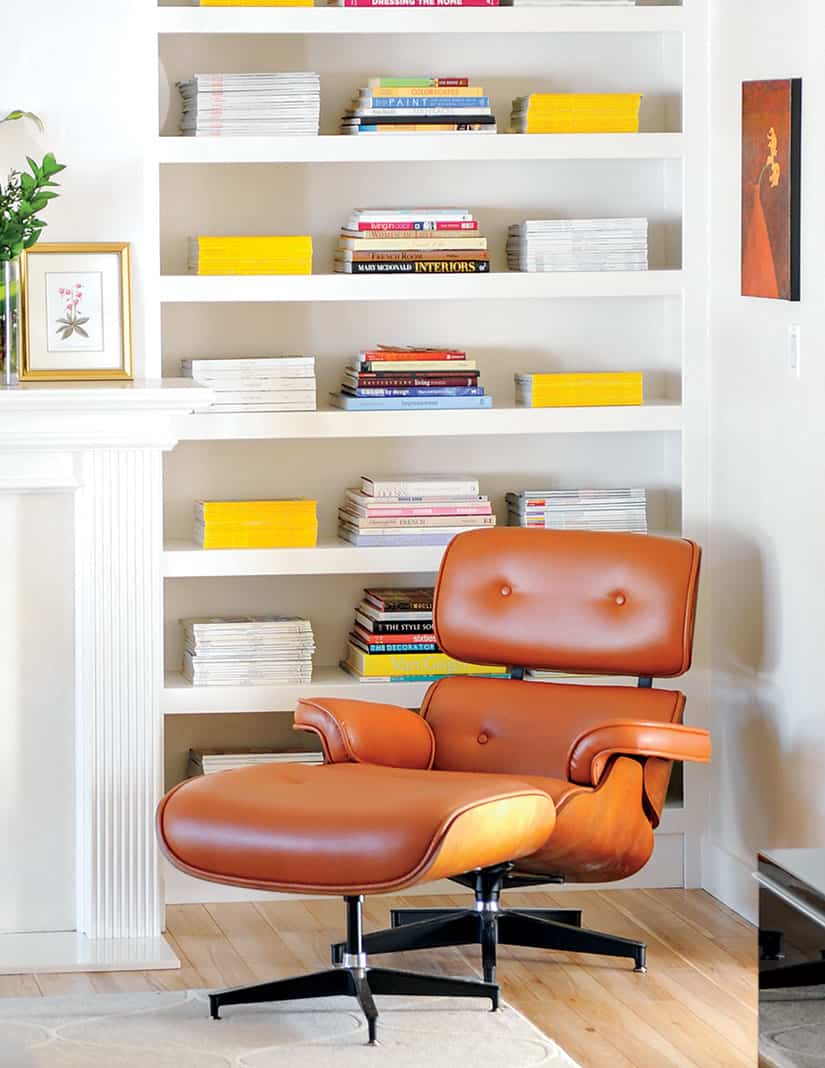 The Mid-Century modern armchair is a perfect foil for the simple white sofa, while its caramel-coloured leather picks up on the various warm tones in the room. The yellow spines of National Geographic magazines add graphic interest and a sunny hue to the built-in open shelving. 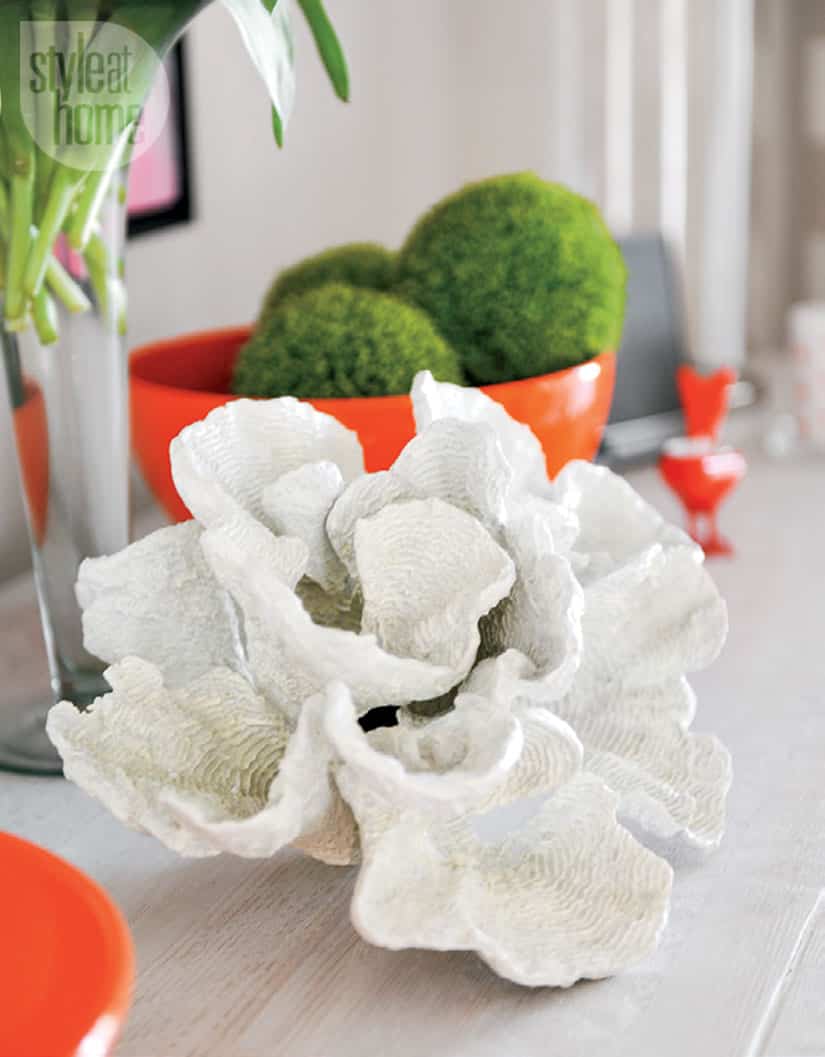 "I really love styling," says Maria. "Books and fresh flowers, a certain vase or the perfect bowl are what complete a room." Here, it's the decor accessories that contribute a healthy dose of colour. Just take a look at the cozy family room, where orange and yellow - in toss cushions, books, artwork and bowls - bring a fresh burst of citrus to the mostly neutral space. 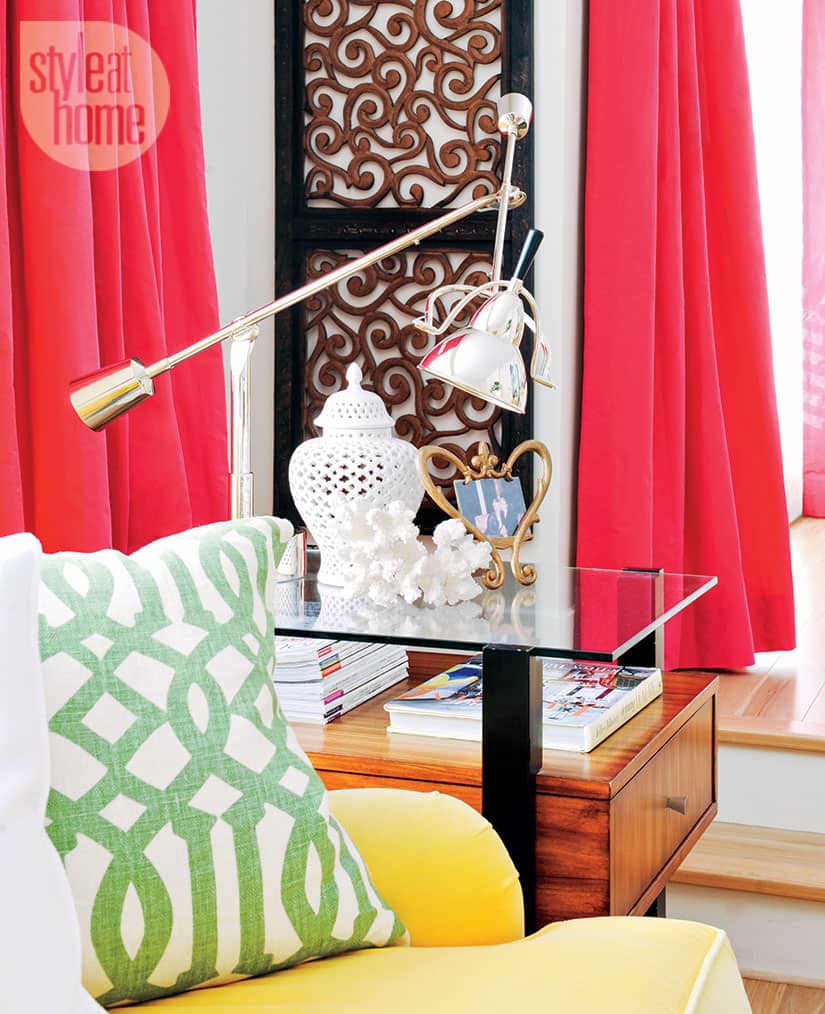 "People respond positively to bright hues," says Maria. "My clients are always attracted to the feeling colour evokes, but tell me they don't know where to start." In her own home, Maria began with a lemon yellow sofa
in the living room. Its effect is cheerful, especially when accented with vibrant pink and green accessories. 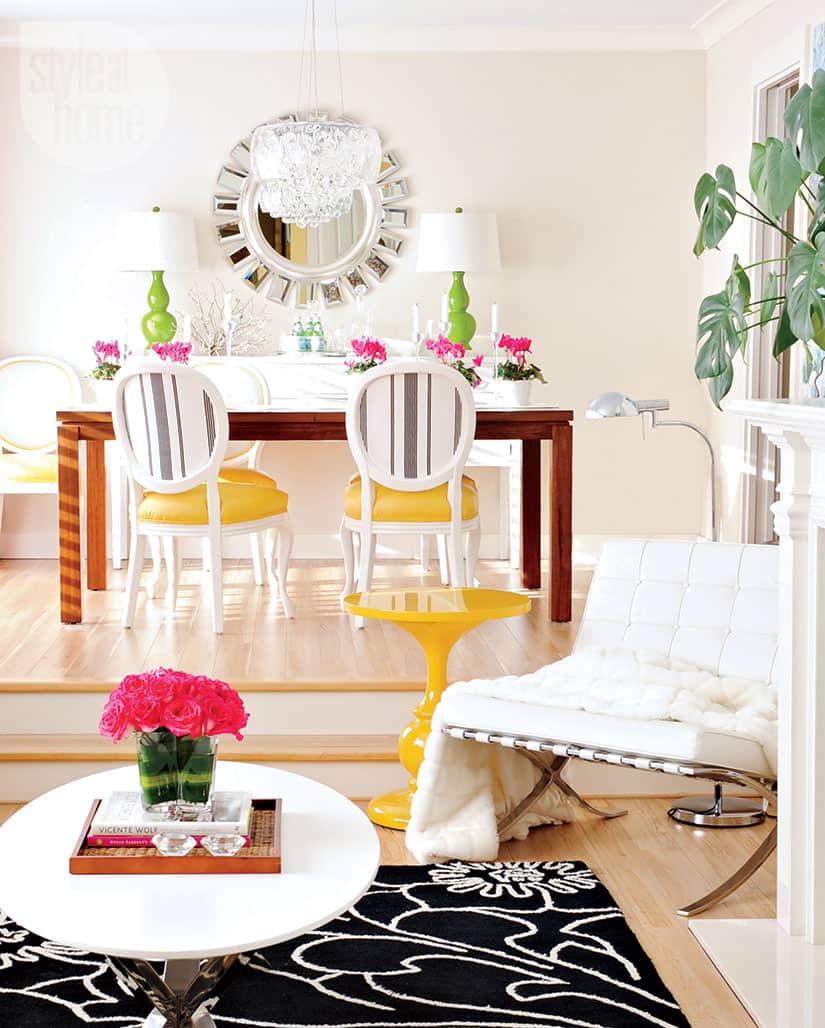 Yellow, pink and lime pop in the raised dining room. "When I had the dining chairs reupholstered, I couldn't decide on one fabric, so I used three," says Maria. 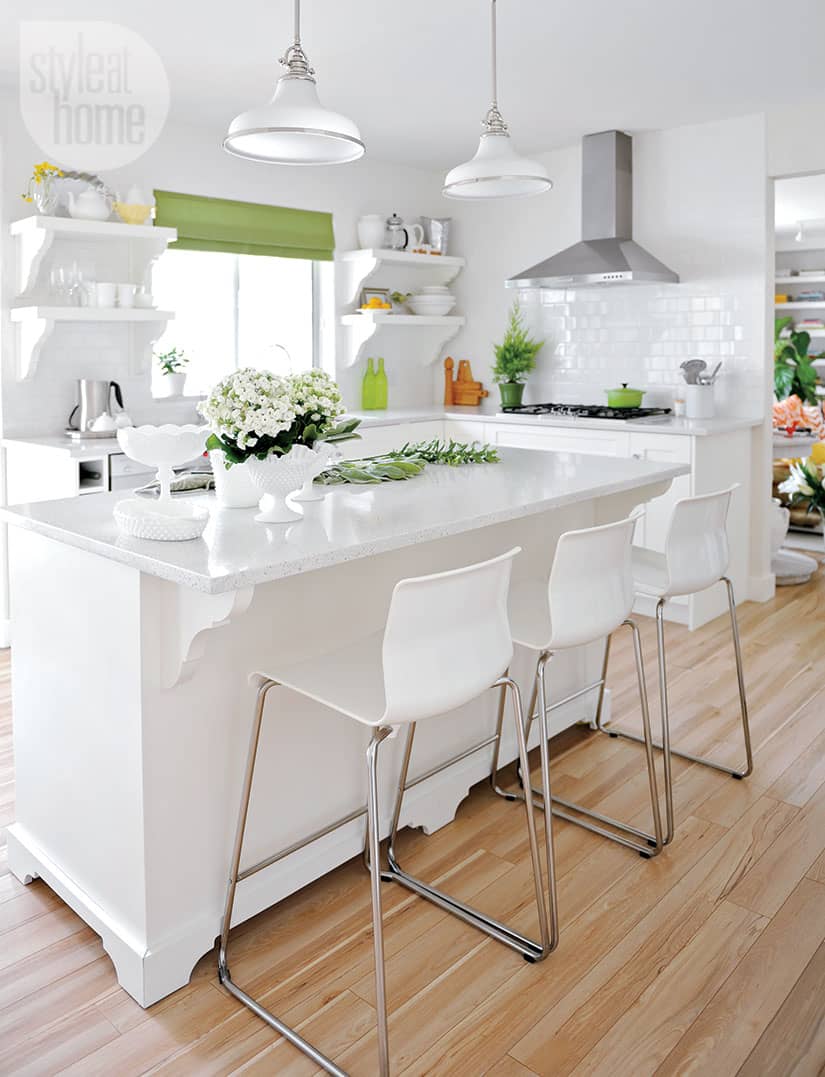 "A crisp white kitchen creates a clean backdrop for the brightest of hues," says Maria. Apple green and wooden accents punctuate the room with a fun, laid-back vibe. The open shelving imparts a country feel that's still fresh and modern. 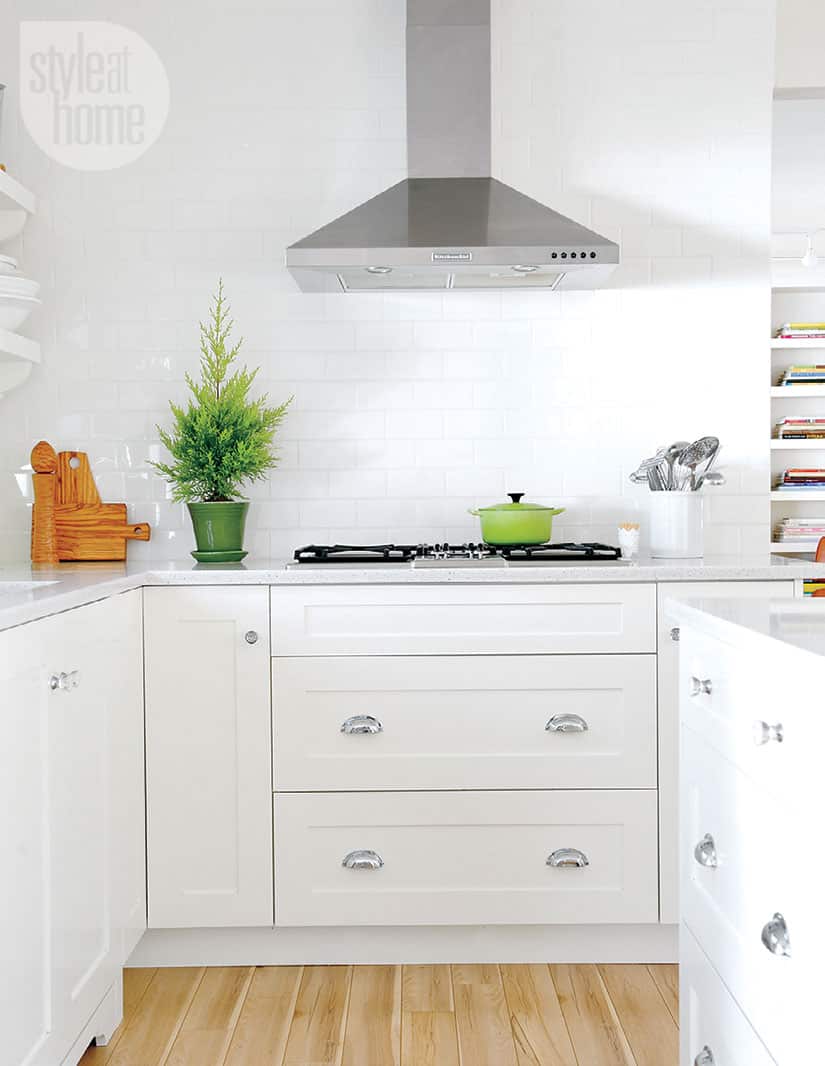 In the spacious kitchen, simple Shaker-style cabinetry, open shelving and glossy subway tile backsplash allow bursts of green to really pop. "That's the reason I love white kitchens," she says. "I think of white as permission to be super expressive with your accents." 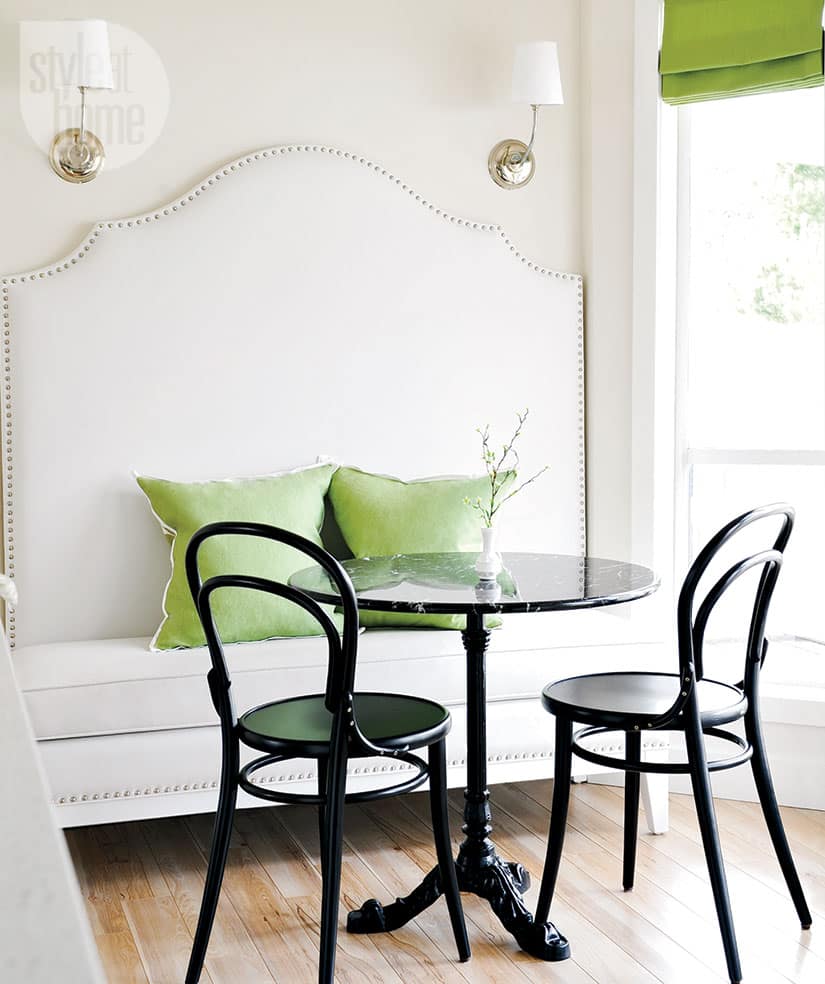 A similar banquette she spotted online inspired Maria to create one of her own. The black café-style dining table and chairs provide contrast to the upholstered bench.