A spacious kitchen with a cozy and eclectic vibe. Author: Robin Stubbert

Inspired by a box-office hit, this homeowner puts a country spin on the beach house look to create the weekend getaway of her dreams.

When the homeowner of this 3,600-square-foot Canadian weekend getaway near Caledon, Ont., saw the movie Something's Gotta Give, she was star struck. Not by actors Diane Keaton, Jack Nicholson or Canadian cutie Keanu Reeves, but by the sprawling Hamptons beach house movie set that played a starring role. Apparently, the rom-com's seaside retreat home left quite a few viewers swooning. But for this homeowner, customizing the on-screen dream to suit her property and her outdoorsy family (including her husband and two daughters) was key. "I wanted to achieve the look on the exterior but in a vernacular appropriate to an Ontario country house, which is why "Inside, I wanted that crisp yet comfy aesthetic of the movie, but realized in earthy tones that would reflect the surroundings."

Detailed traditional millwork-beadboard, raised panels and coffered ceilings - all in white creates the tailored architecture she envisioned. The coziness comes from plush-to-the-touch upholstery, comfy nooks like the kitchen's bay window banquette and an eclectic mix of furniture that personalizes the home and gives it an evolved-over-time feel. Old-fashioned mullioned windows were left bare to bring the outdoors in. "I didn't want anything competing with the stunning view," she says of the 45 acres of meadows, forest and rolling hills. "I didn't even want the colour palette to conflict with it." She chose natural earth tones, dark woods and rich fabrics to warm the white walls and balance the expansive windows.

"You want things to be easy in a country house." And though it may not have been easy to create, she made it look as effortless as it does on the silver screen. 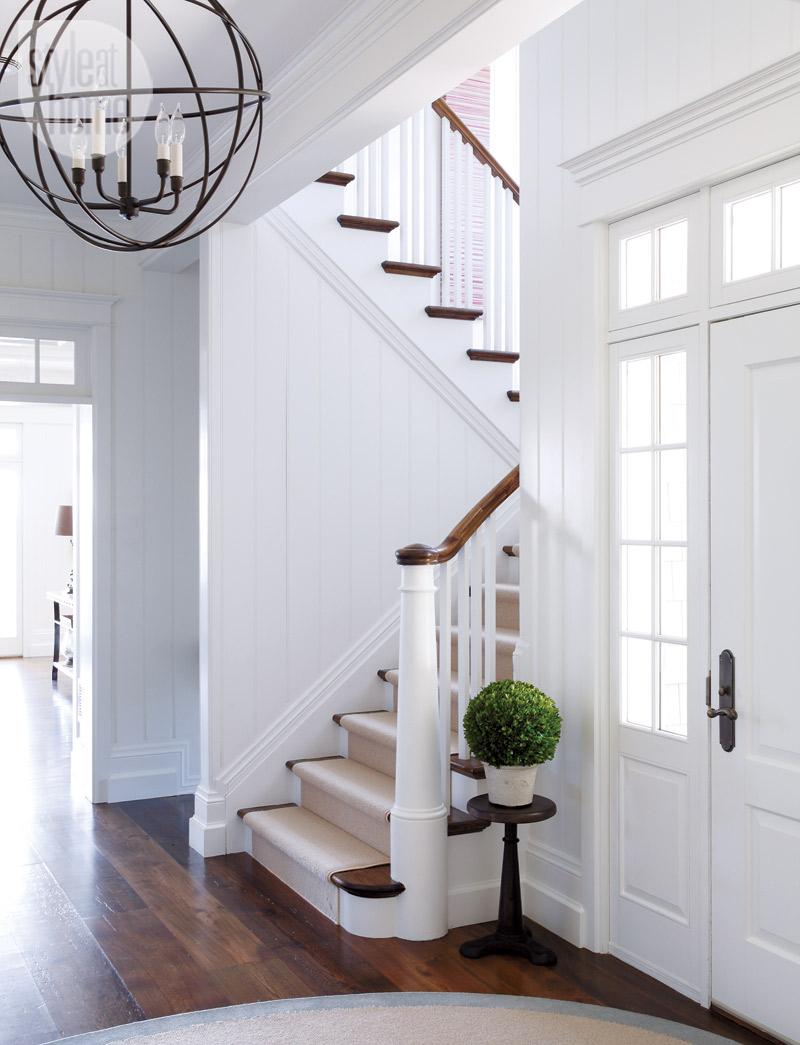 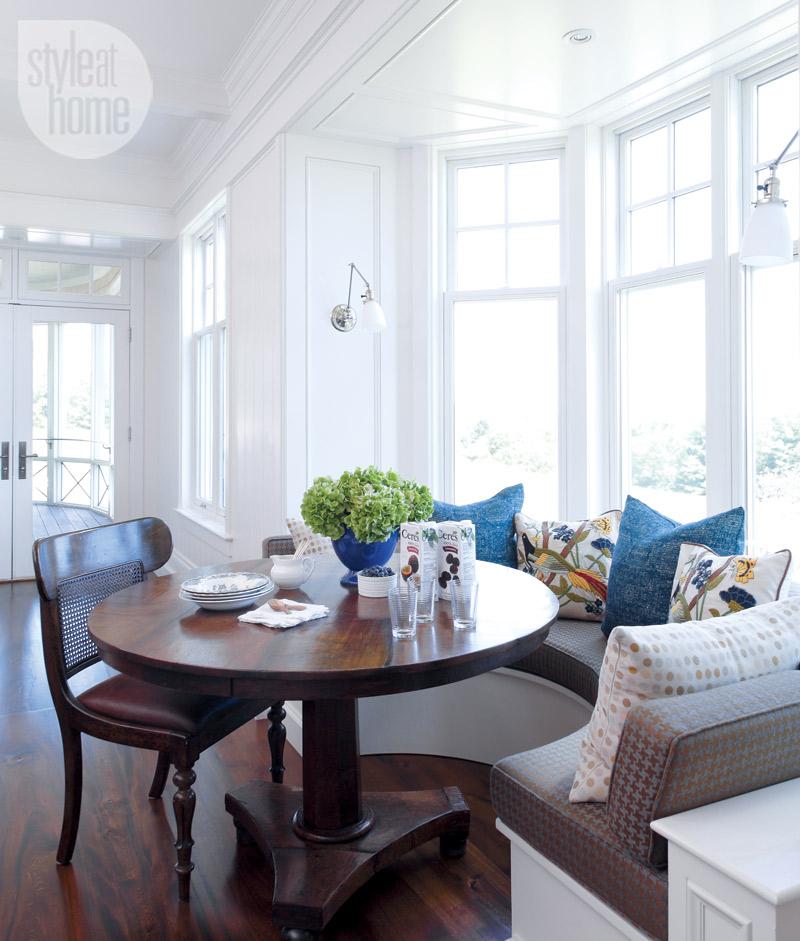 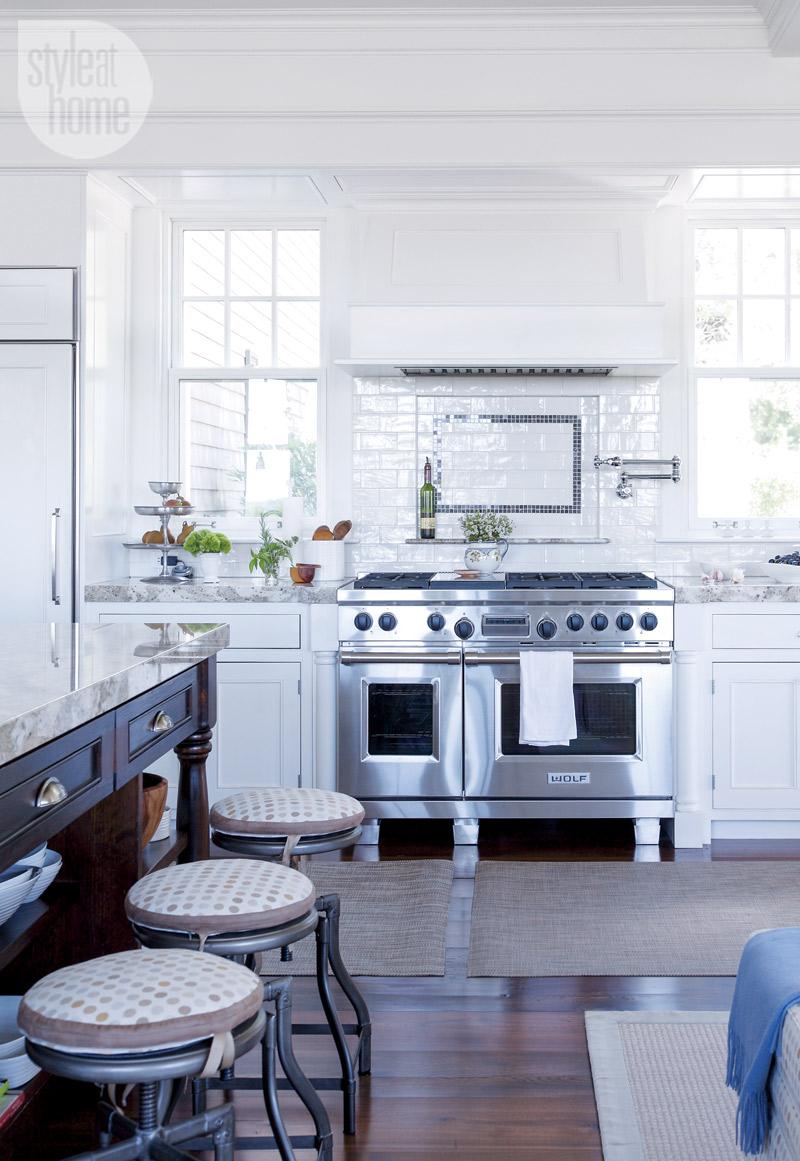 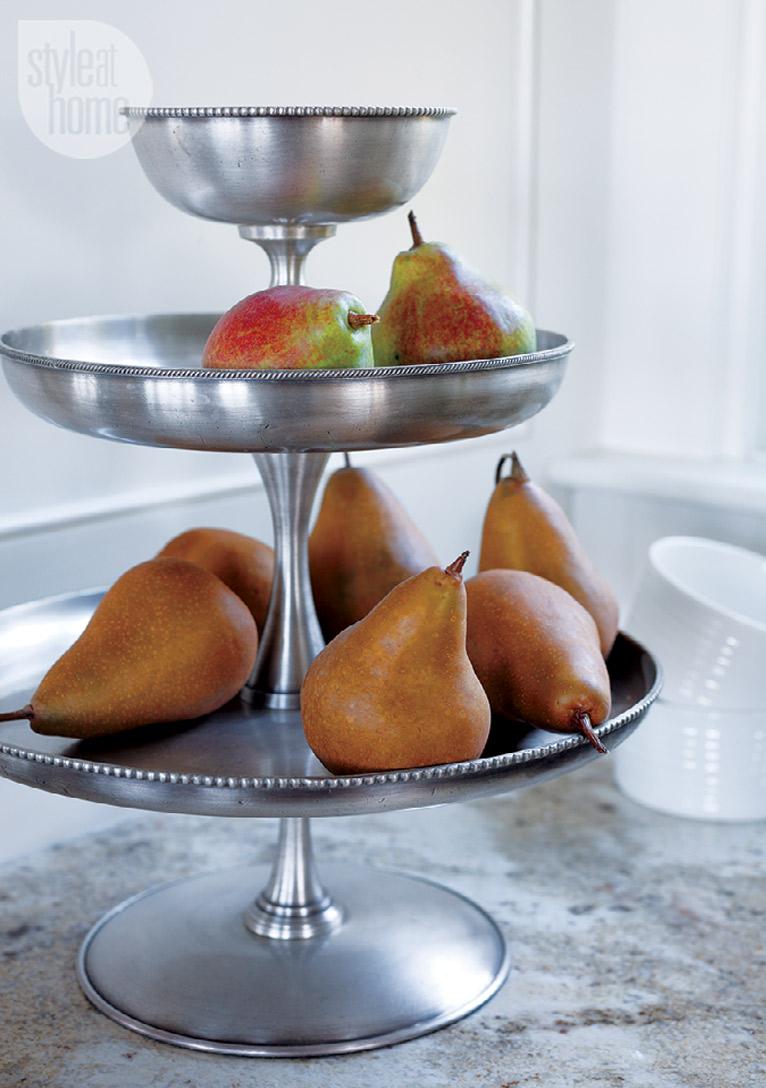 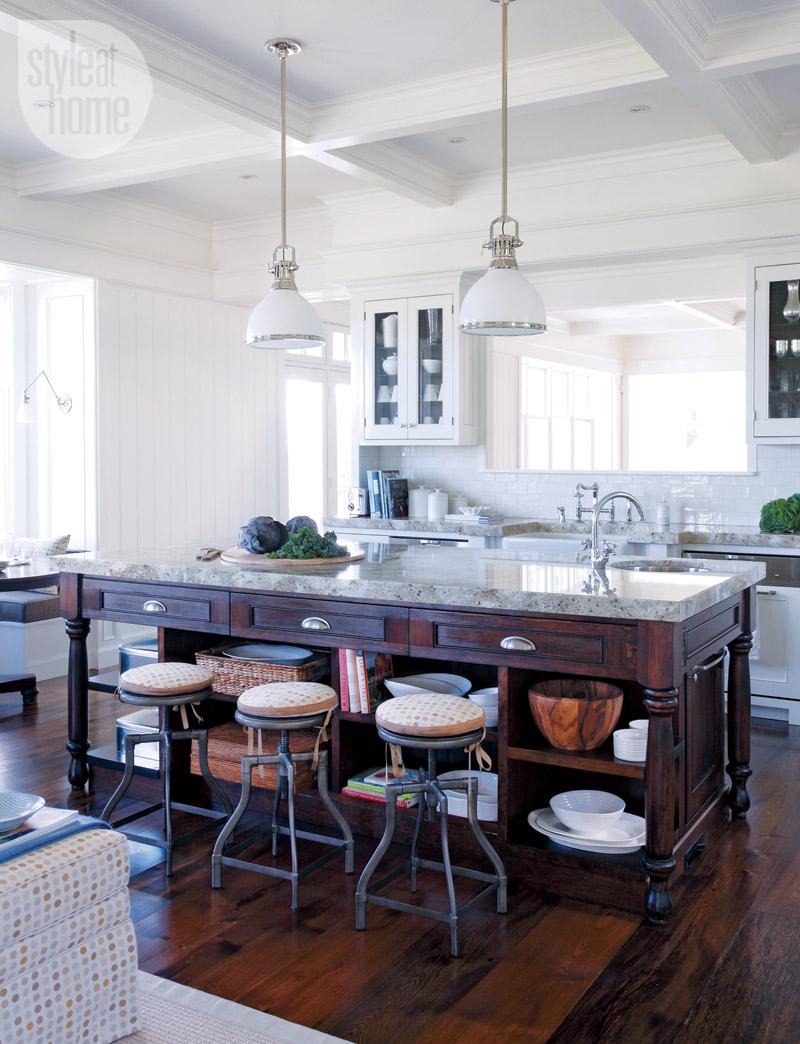 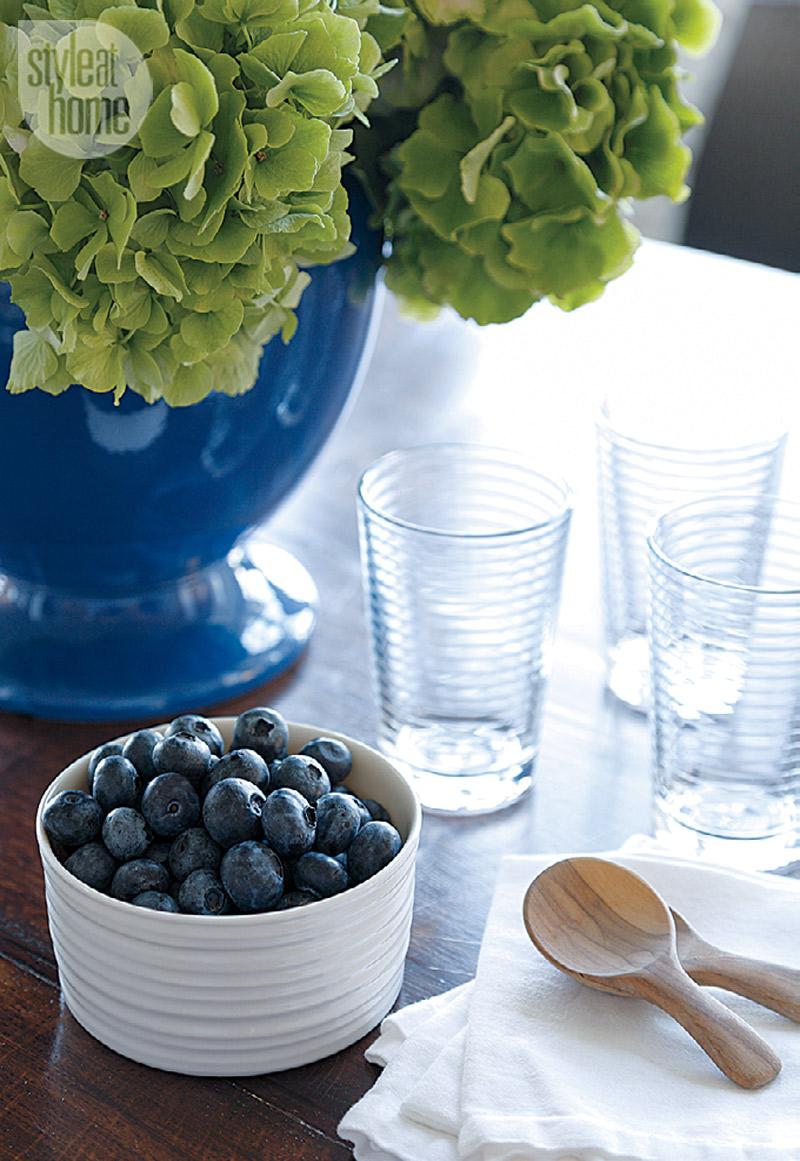 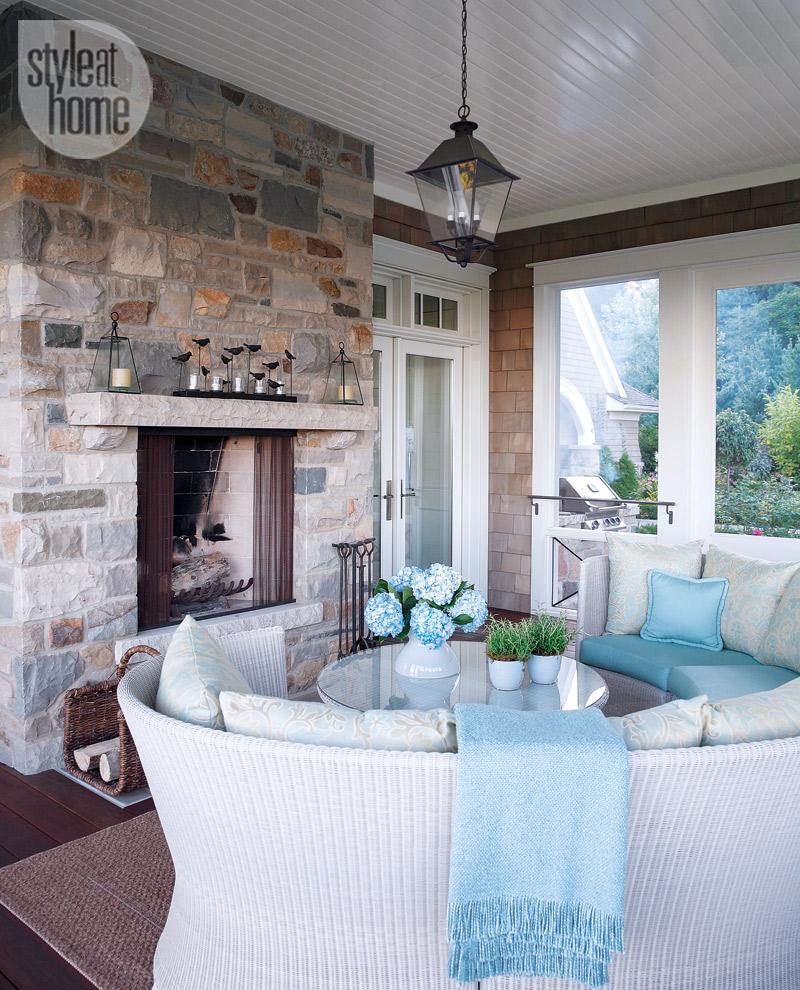 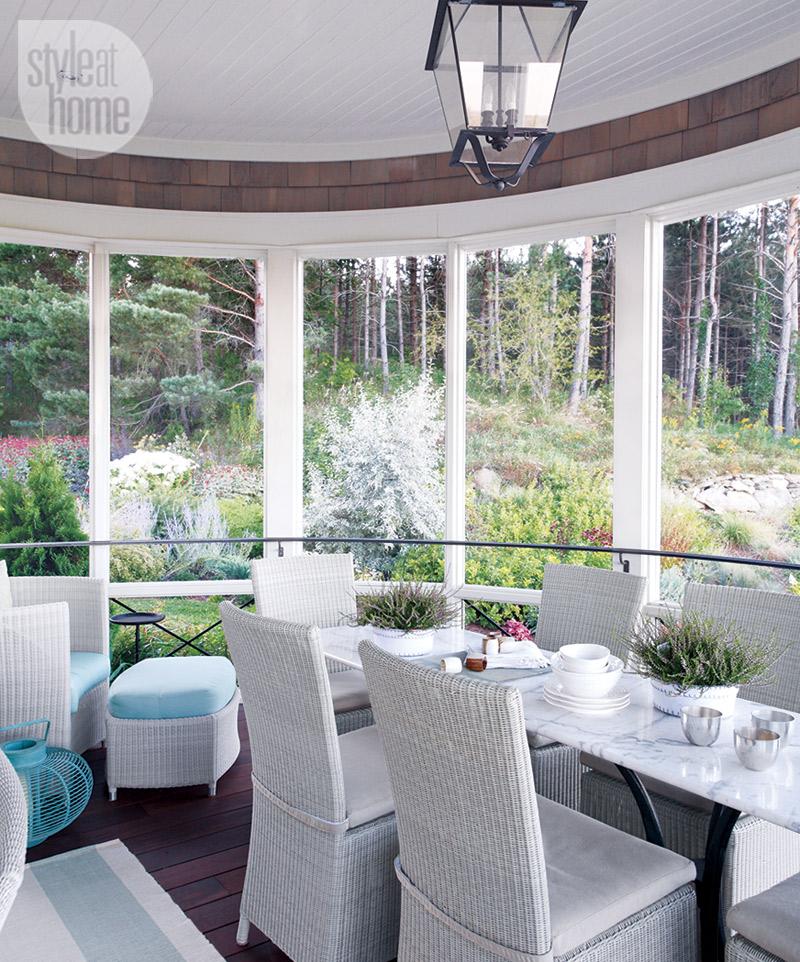 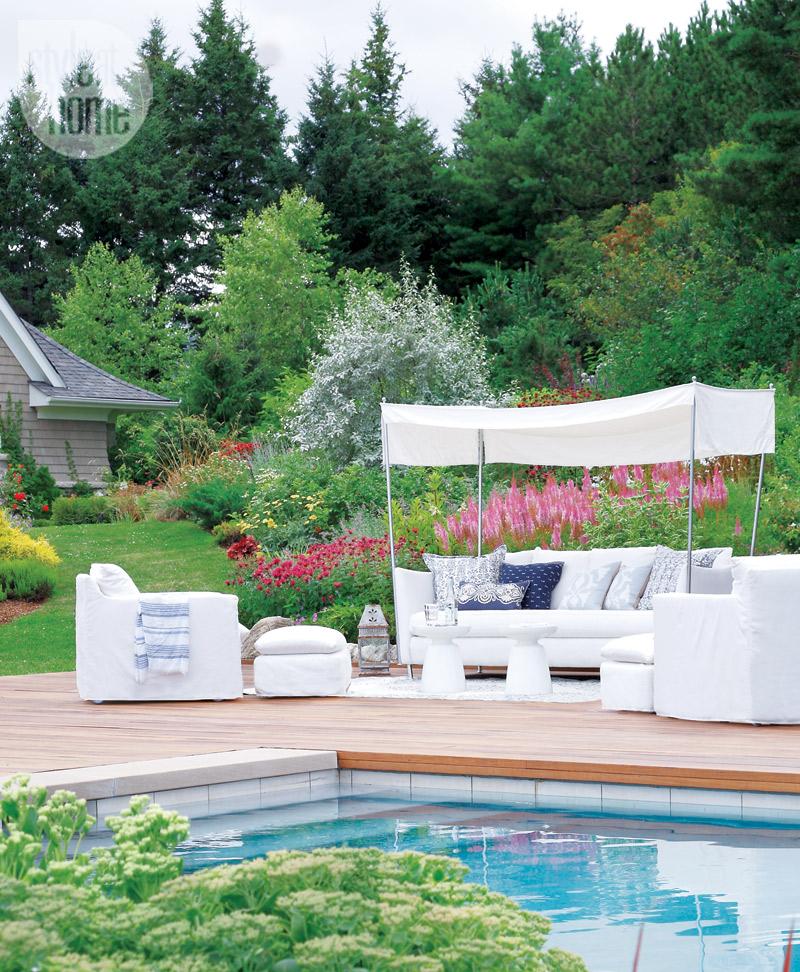 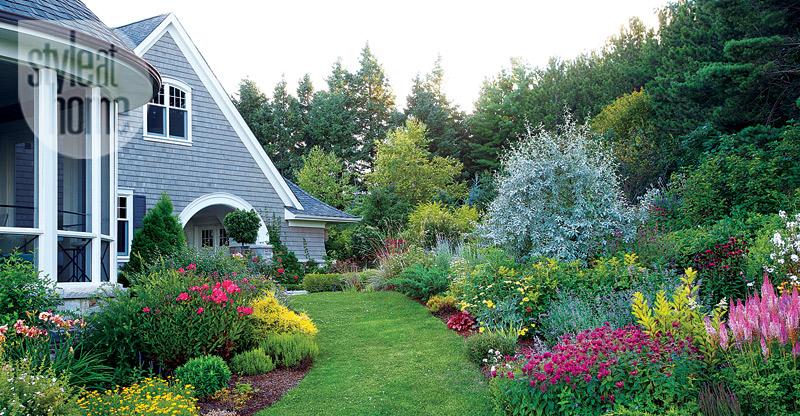 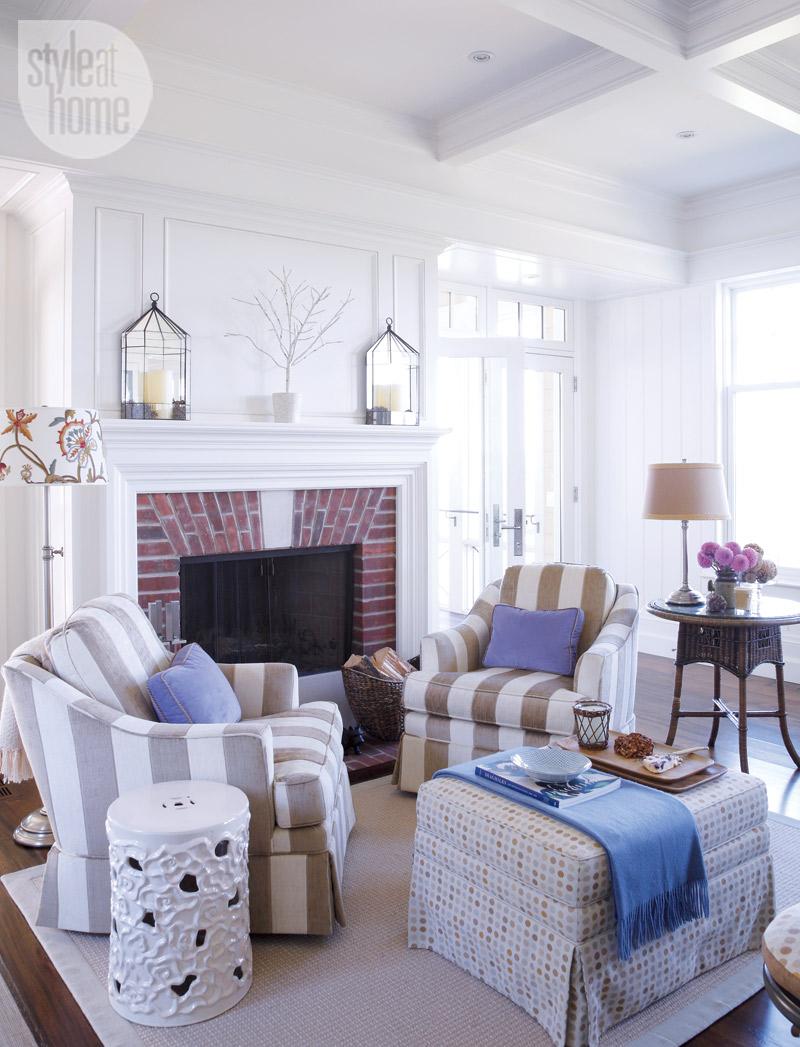 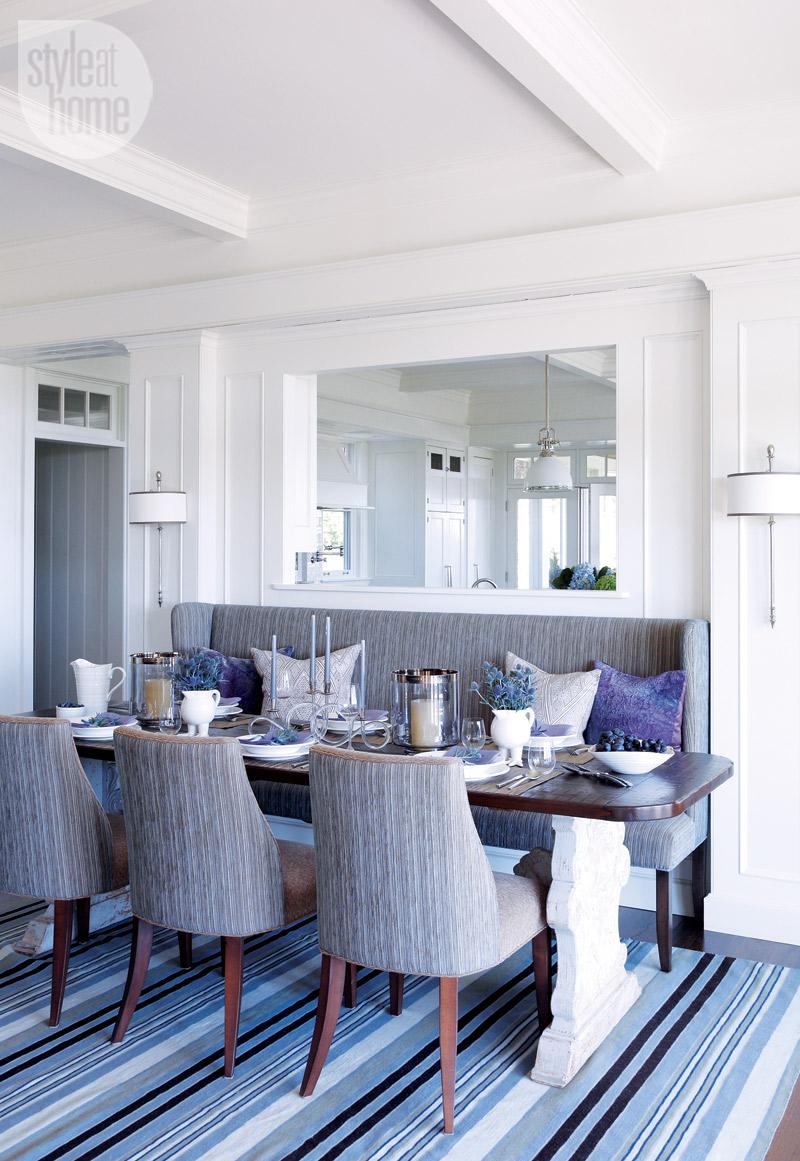 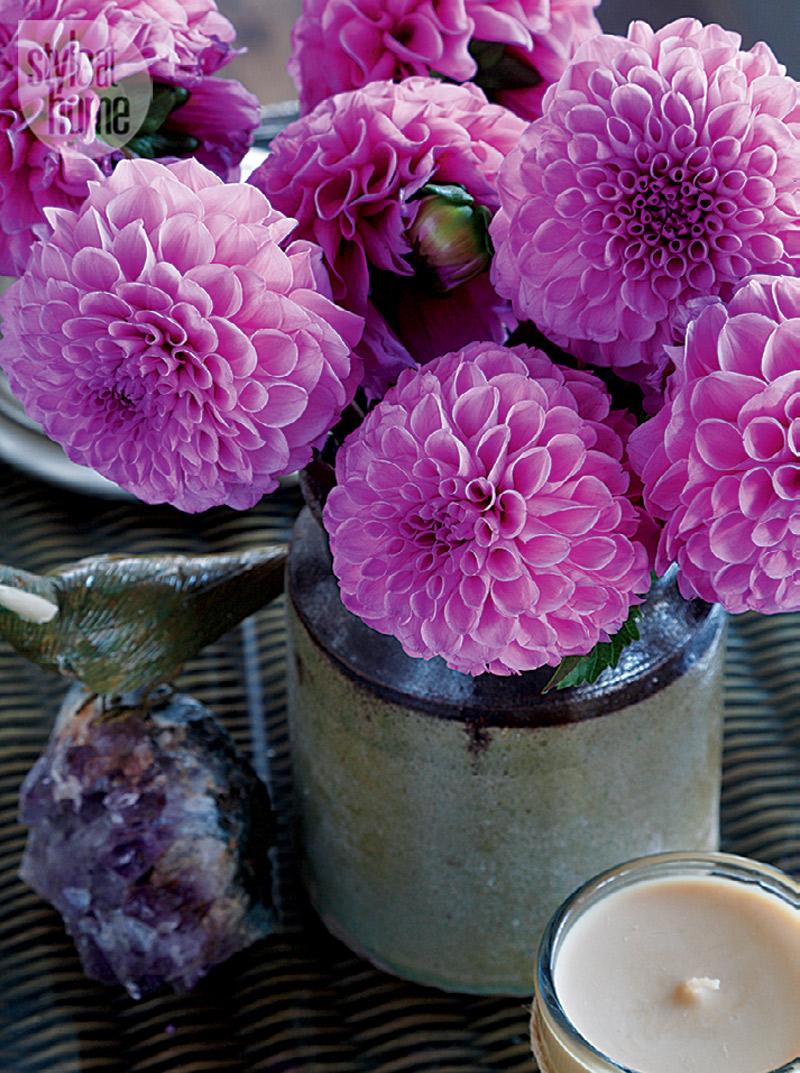 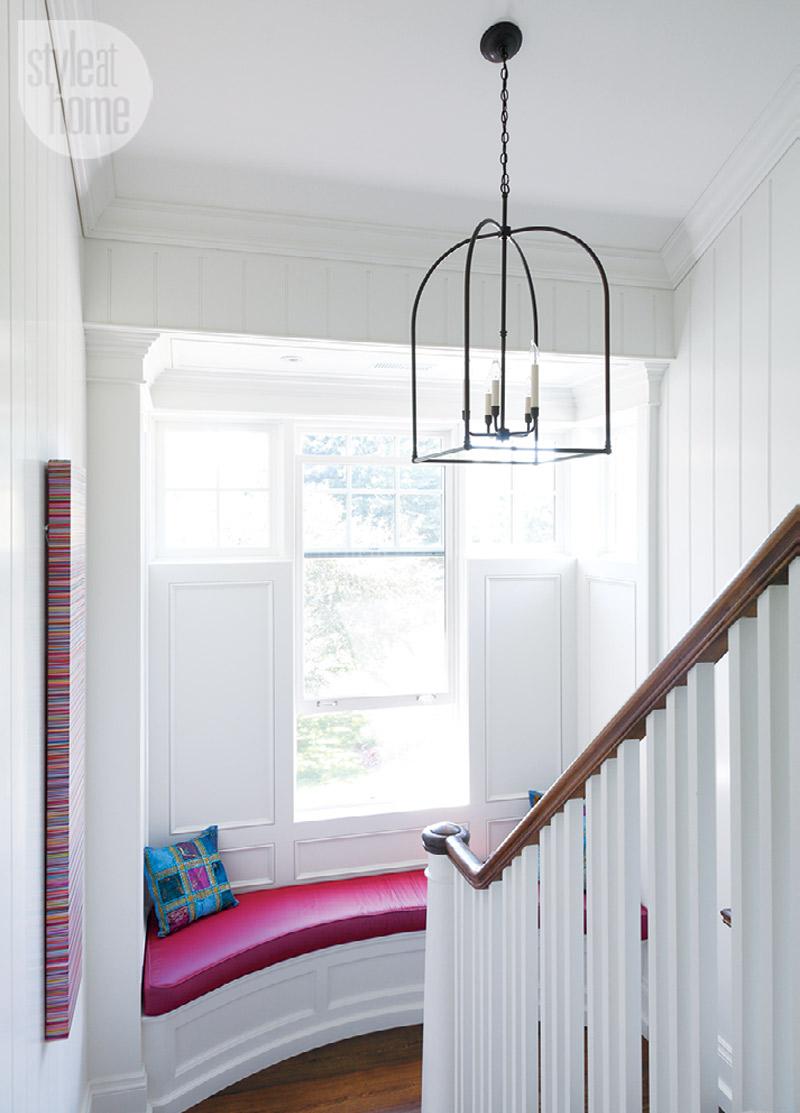 In the light-filled entryway, the abundance of white is grounded by the dark wooden floors, banister and stair treads. The newel post boasts an early 20th-century feel.

“When it’s just us four, we eat breakfast, lunch and dinner at the kitchen table because the view is spectacular,” says the homeowner. Durable indoor-outdoor fabric on the banquette ensures easy cleanup.

The Wolf gas range was a must-have (it’s much like the one in the film’s memorable pancake-making scene between actors Jack Nicholson and Diane Keaton). Double-hung windows, recess-panelled cabinetry and a glossy white subway tile kitchen backsplash gives an overall timeless feel.

This elegant chrome fruit tree sits on top of the marble countertop and adds a decorative yet useful function to the kitchen space.

“The kitchen’s a real copy-cat of the one in the movie Something’s Gotta Give,” says the homeowner. She was keen to create a comfy, eclectic vibe by mixing elements like a farmhouse-style sink, vintage-look faucets and industrial-inspired stools topped with a contemporary polka-dot fabric.

The simple white-coloured bowl and clear cups add a contemporary vibe to this country-inspired home.

Guests can enjoy pre-dinner drinks on the screened-in porch’s cozy sectional while the host barbecues just outside in the courtyard. After dinner, the kids love to roast marshmallows in the double-sided wood-burning stone fireplace.

The three-season room, which is a destination for family and frequent guests, had to be large enough to be multi-purpose. The two marble and iron tables are where most meals are served in the summer.

“I didn’t realize how much people would fight for spots on that canopy sofa,” says the homeowner, who admits that she herself has a hard time getting up from it to make dinner.

Though the homeowner was encouraged to install stone steps from the house to the pool, she opted for a grassy slope. “There’s less chance of tripping, and you feel a connection to the environment,” she says. A border of mixed perennials blends seamlessly into the surrounding countryside.

“I wanted enough comfortable seating areas in the kitchen to accommodate everyone,” says the homeowner, who entertains guests often all year-round. Two sets of French doors flank the fireplace for easy flow to the screened-in porch. “When you open them in the summer, the breeze just flows right into the kitchen,” she says. “It’s like being outside.”

In the multi-function dining room, the wooden tabletopwas stained a darker shade and given rounded corners so people could easily slide in and out of the banquette. On most weekends, this is where the family plays games and the girls do homework.

These radiant orchid inspired flowers add colour to the open-concept seating area that connects to the kitchen. The rustic vase adds a country-like feel.

The stairway landing gets an unexpected pop of colour thanks to a fuchsia seat cushion.