A less-than-desirable cottage on a private Muskoka, Ontario waterfront lot becomes the perfect family getaway thanks to a design-savvy couple.

It was three years ago when architectural designer David Spolnik, owner of Sprout Studios in Muskoka, Ont., was approached by a couple in need of a comfortable new cottage. Their existing summer getaway on Ontario’s Lake Rosseau stood on a private waterfront lot surrounded by trees, but there was one catch: The outdated structure was poorly laid out and no longer suited to this family of four. “The interior just didn’t make sense,” says David. After looking at several other properties, the homeowners realized that they wouldn’t find a lot as perfect as theirs and decided to renovate what they had instead.

Because the couple spends the entire summer at the family cottage and sometimes commutes from the city to enjoy weekends there throughout the year, they wanted a space that could grow with their family (they have two young boys) and would have a similar look and feel to their stunning city home. “We wanted a year-round place for our kids, as well as expanded living and sleeping space for friends and family,” says one of the homeowners. “The atmosphere had to be informal, fun and hip.” 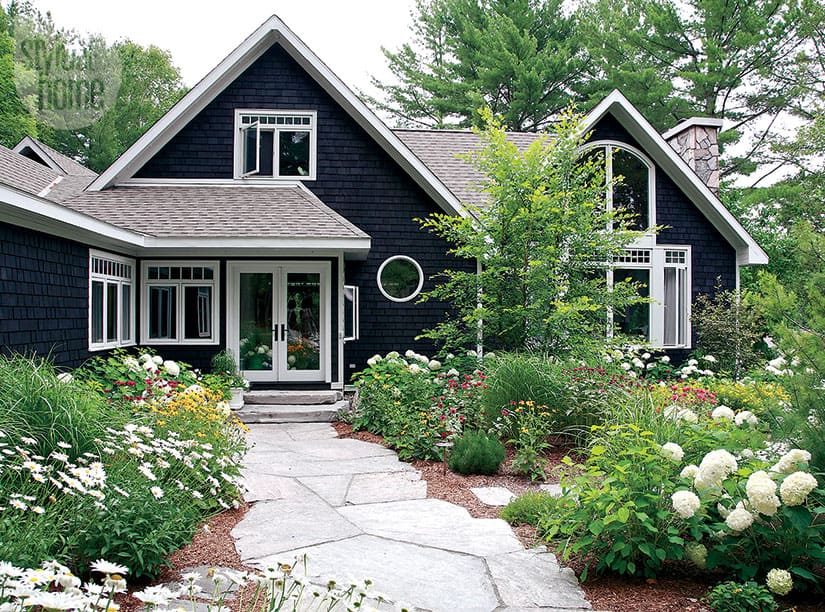 A range of sun-loving plants makes up the cottage’s landscaping. The white, yellow and red blooms are in sync with the interior’s colour palette. Mulch keeps the weeding to a minimum, meaning more time for fun and relaxation. 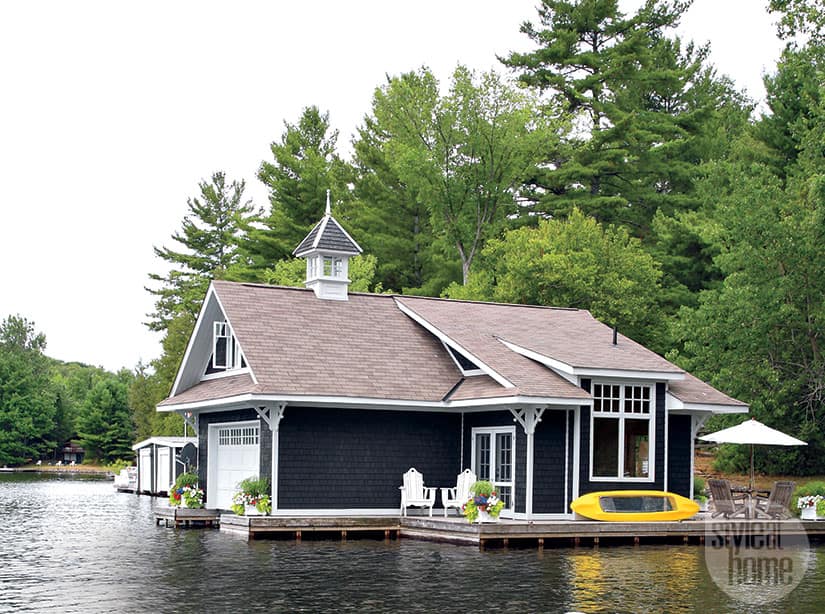 The large dock alongside the boathouse boasts a sitting area for two and a rustic dining spot. Colourful containers mark the corners of the dock for a pleasing look.

The original stone fireplace acts as a focal point in the living room. The rest of the space is tied together with white walls and furnishings, while the exposed wood ceiling has a grounding effect. 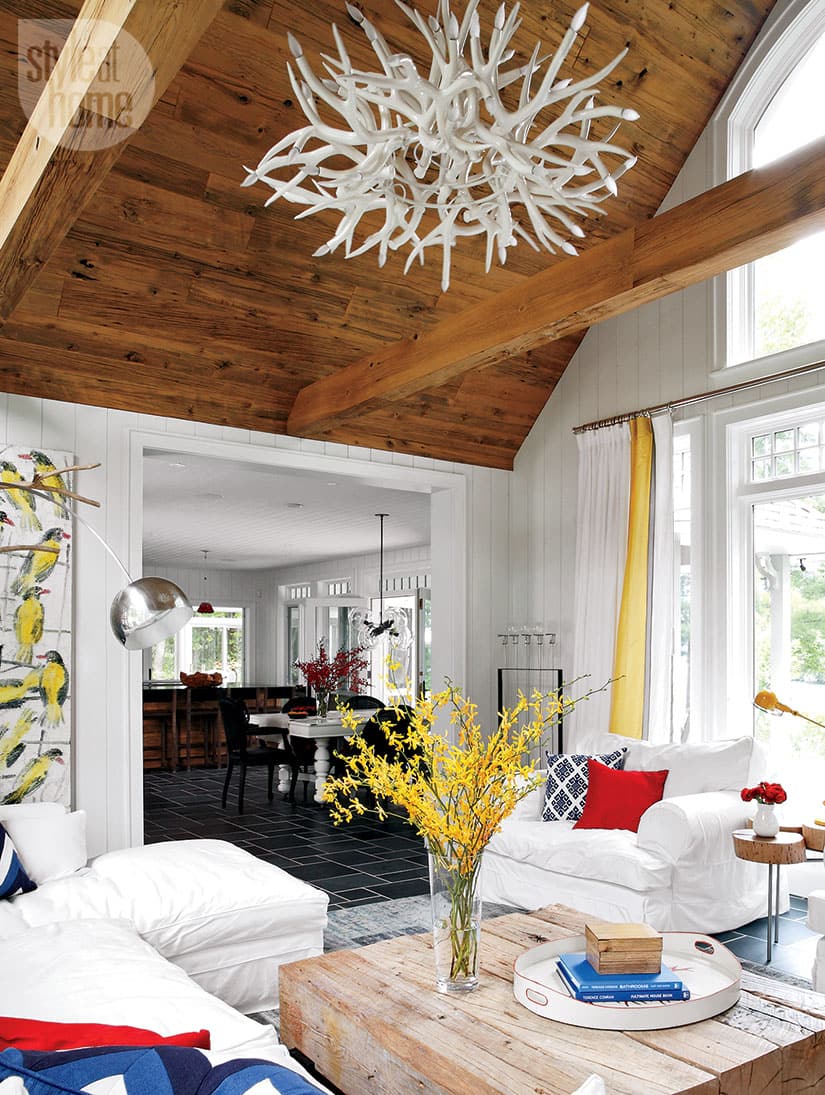 The newly focused living space is truly reflective of the homeowners’ aesthetic. The open sightline directly into the kitchen is perfect for keeping an eye on the kids and entertaining family and friends. 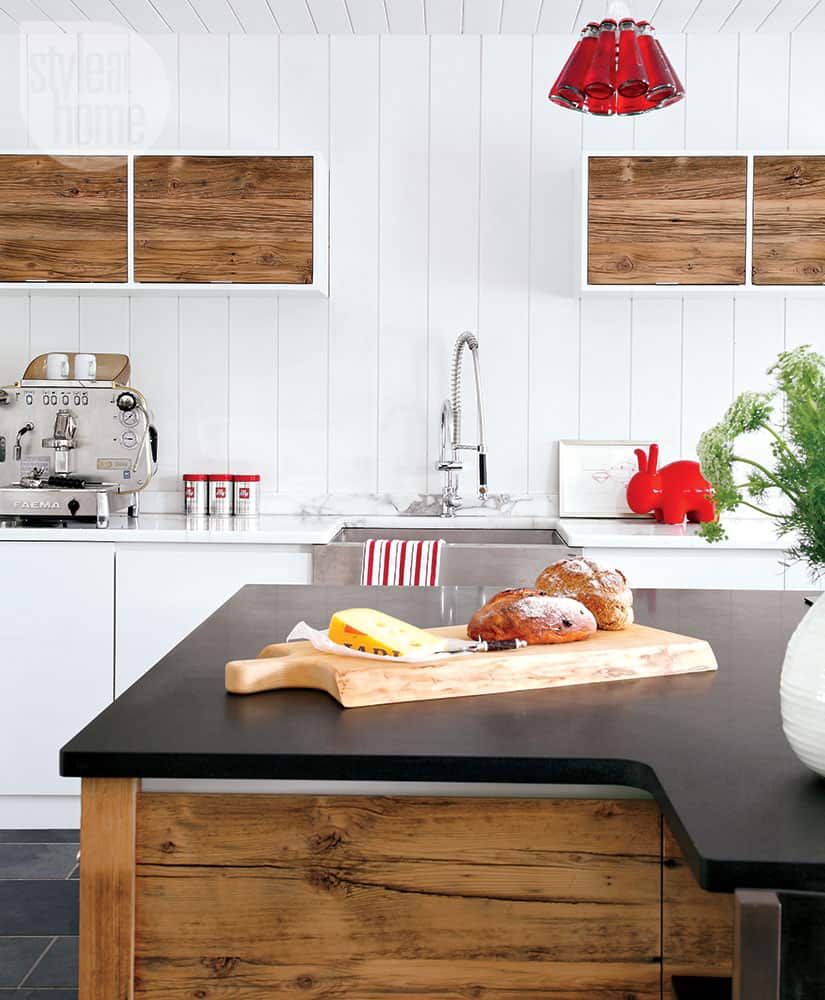 The homeowners wanted the kitchen to really stand out, so they selected slate tile floors and a dark, sleek island countertop to pop against the white backdrop. Barnboard was used on the upper cabinet doors and the base of the island, providing a wonderfully rich texture to the room. 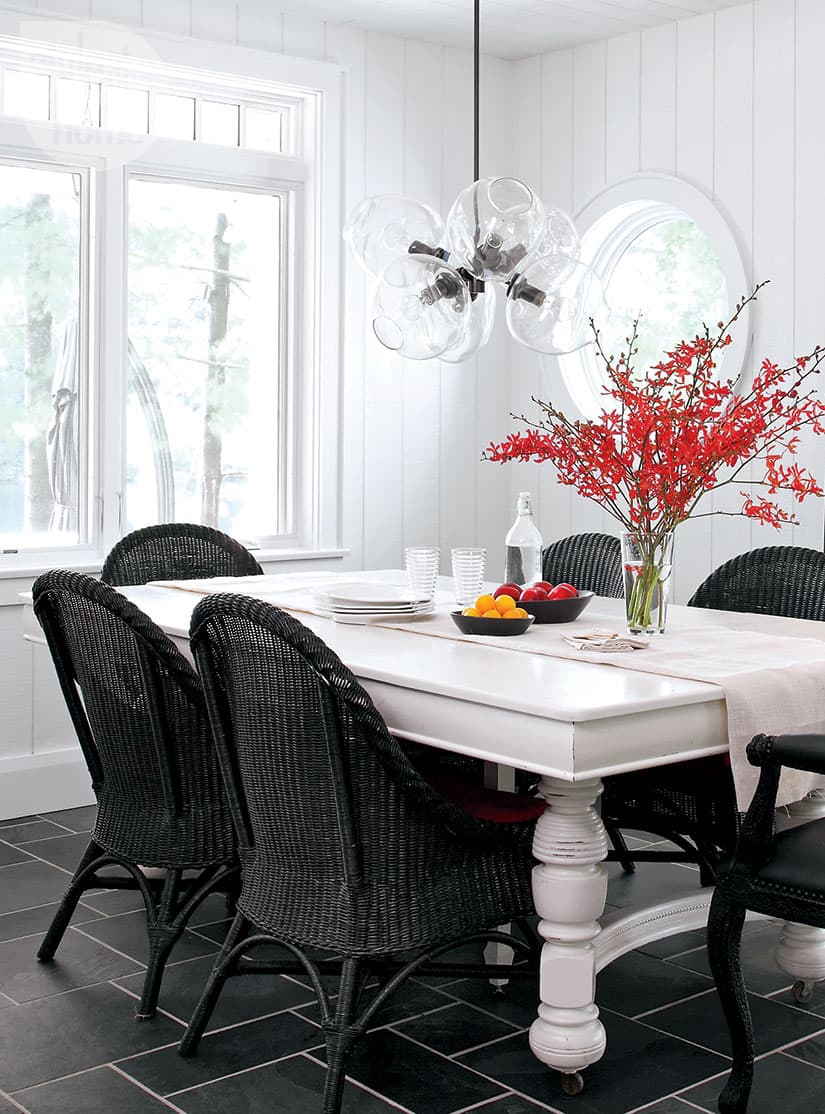 Situated within the kitchen area, the dining space has a polished appearance yet still feels casual and rustic with its distressed white dining table and black wicker chairs. The circular window was added as an architectural feature. 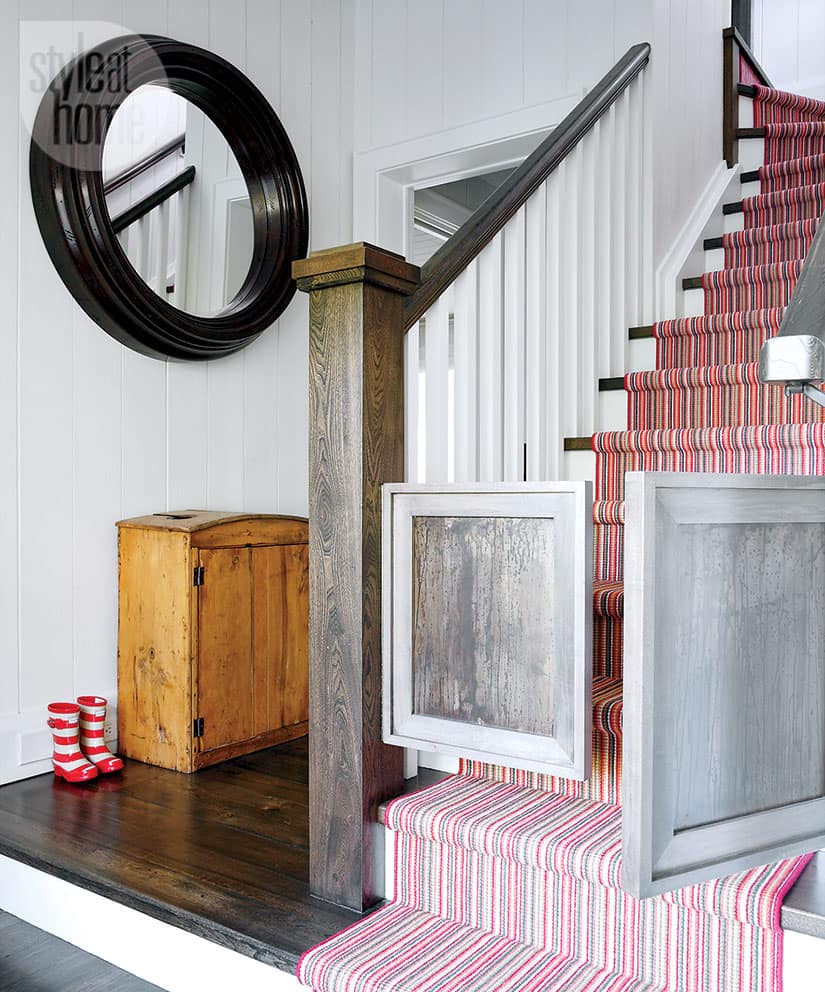 The stairs, which are covered in a colourful striped carpet runner, didn’t exist in the original cottage – they were added during the reno to lead up to one of the boys’ rooms. 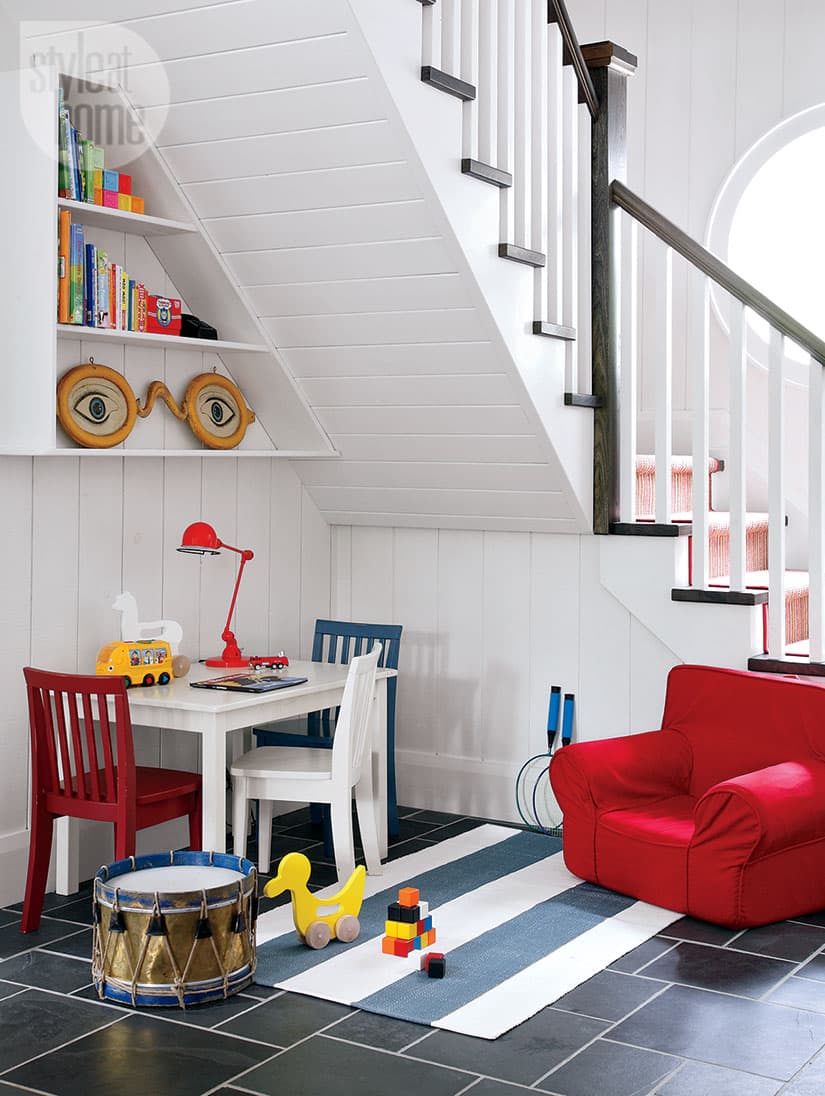 The space underneath the stairs – previously a closet – was the perfect spot to convert into a play area for the kids to colour, read and play. 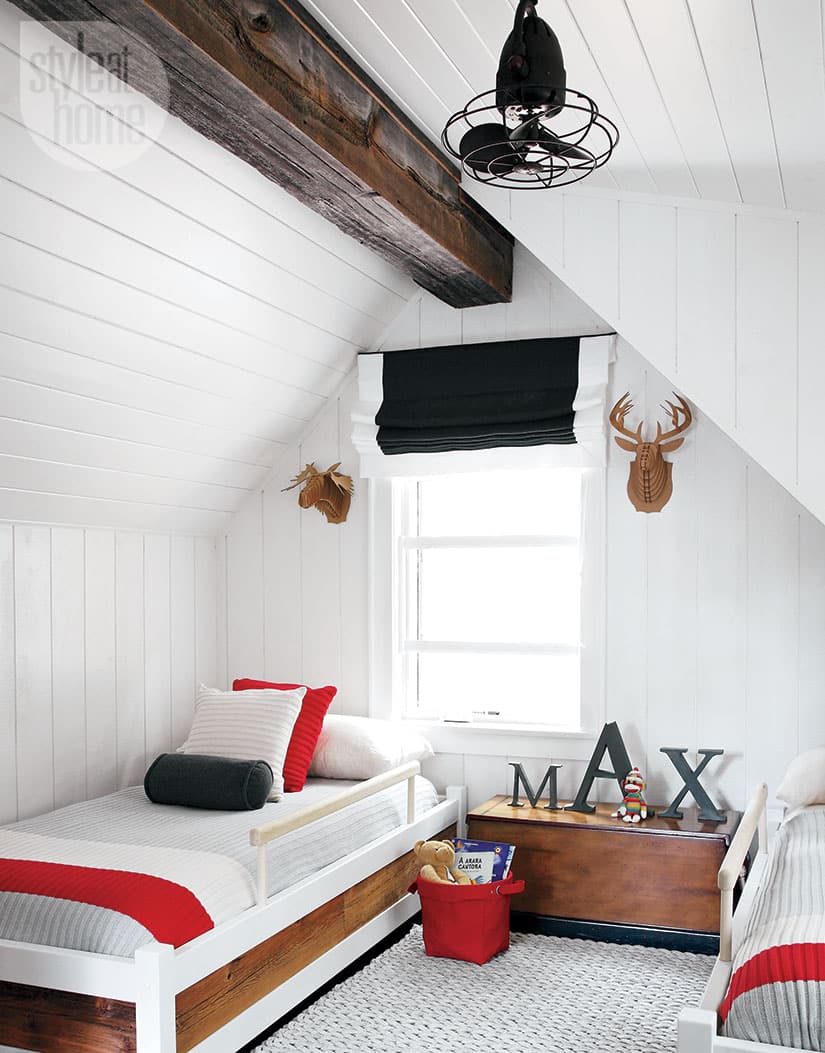 The white panelling continues into one of the boys’ bedrooms (formerly an unusable attic space). Hits of red and navy add colour, while the cardboard animal heads on the wall are a charming rustic touch.