When these newlyweds ditched their condo for a house — as so many do — they set their sights upon Toronto’s leafy Summerhill neighbourhood , which they admired for its older homes. The couple found a 2,290-square-foot four-bedroom semi built in the 1930s that fit the bill in terms of age and locale, but it hadn’t been touched since the ’80s.

“It was so dark,” says one of the homeowners, referring to the interior, which was coated in dowdy browns and suffering from tiny rooms and windows, as well as a gloomy kitchen partitioned from the rest of the house. “We needed more light and a large kitchen for my husband, who loves to cook,” she says. Simply put, the house was hardly what you’d call a love nest. So the homeowners enlisted Croma Design’s Ryan Martin and Amy Kent to give their starter house a style transfusion.

“We wanted to create a classically inspired backdrop with clean-lined furnishings and art,” says Amy. The homeowners didn’t want to go too stark or too stuffy, so they settled on a transitional look with bold lashes of black and modern furnishings boasting traditional details. And, of course, they addressed the cramped spaces and lack of light. 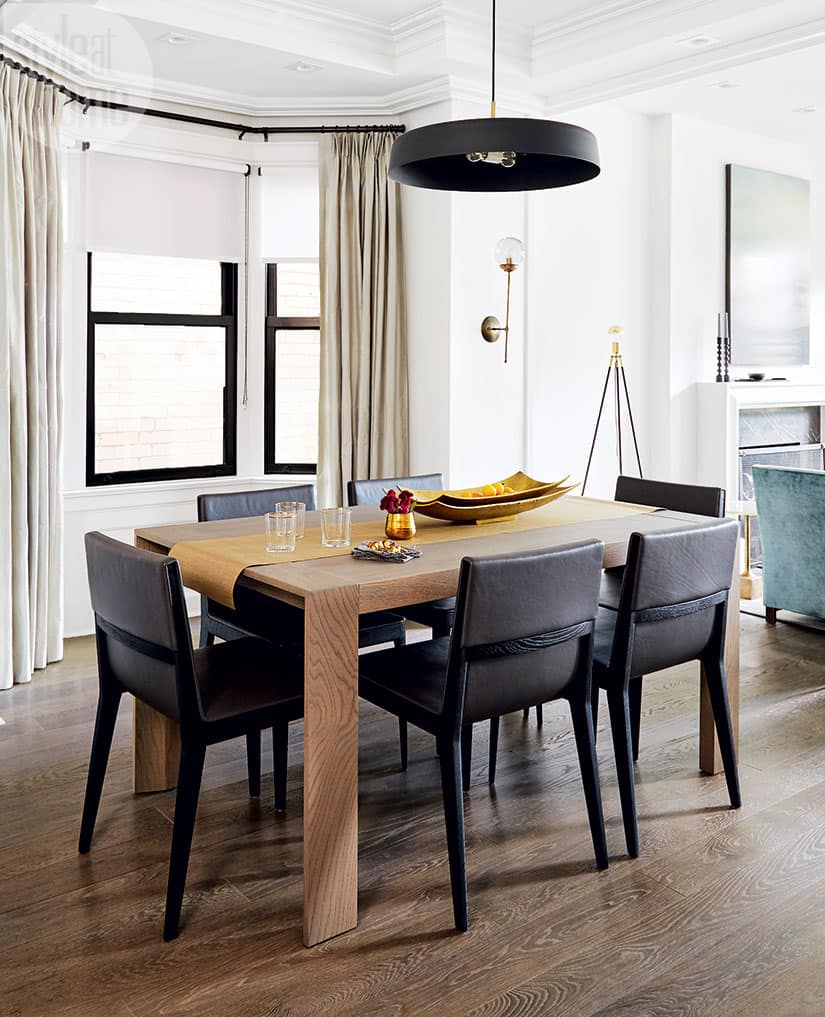 To that end, the designers reworked the layout, removing the powder room, relocating the kitchen and expanding the windows at the front and back of the house. “We opened everything up so the light emanating from the new windows and existing skylight would stretch further,” says Ryan. 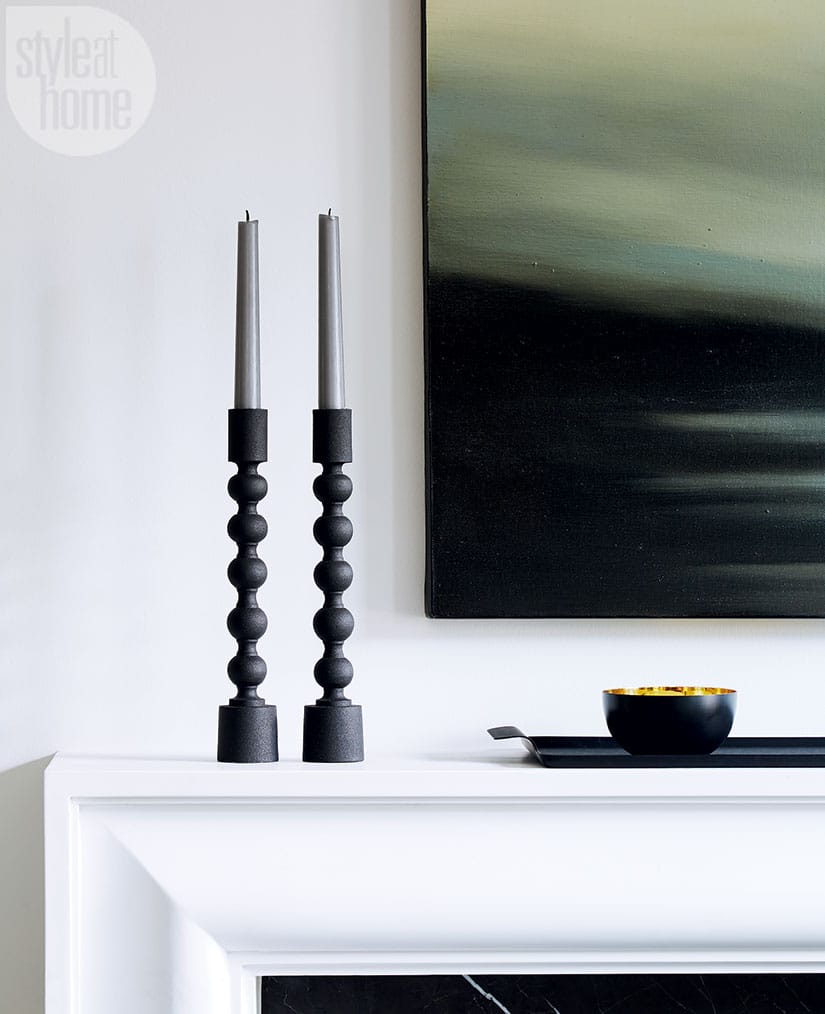 As for the finer details, near-black accents add striking drama against the palette of soothing greys, blues, browns and whites. “The colours in this home are very subtle, tone-on-tone and easy to live with,” says Amy. “We wanted the house to make an impact as a whole – not for any particular wall or accent to stand out above the rest.” 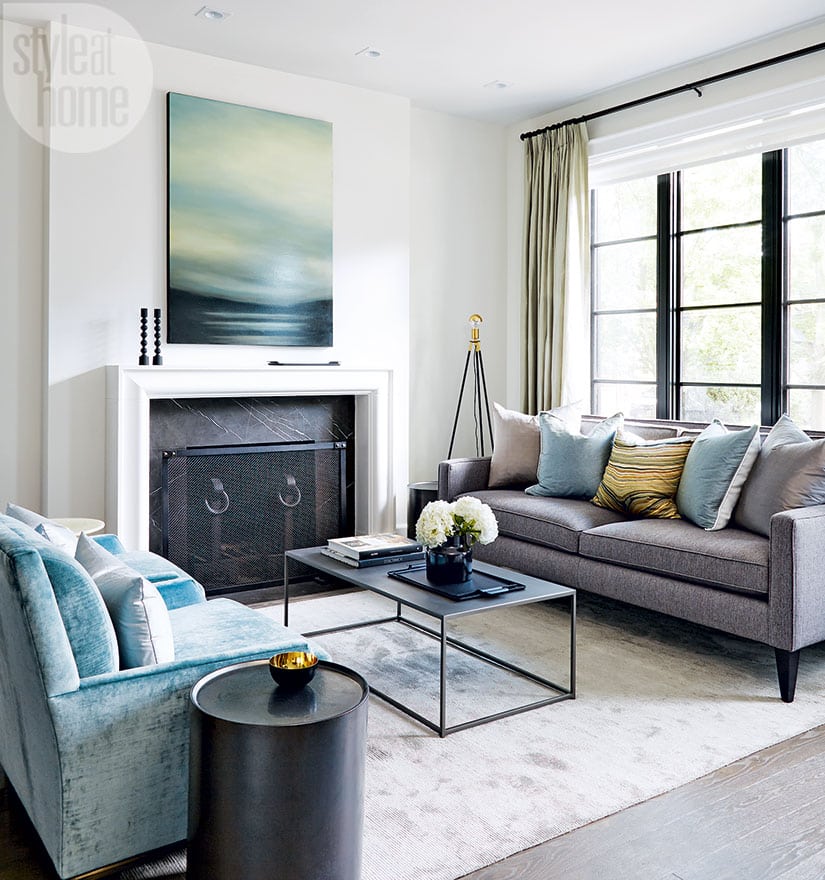 Whether the homeowners are upstairs lounging in the relaxed media room or downstairs sipping tea in the more formal living area, there is indeed a clear sense of cohesion, which is a hallmark of this home — and what makes it a far cry from its gloomy beginnings. 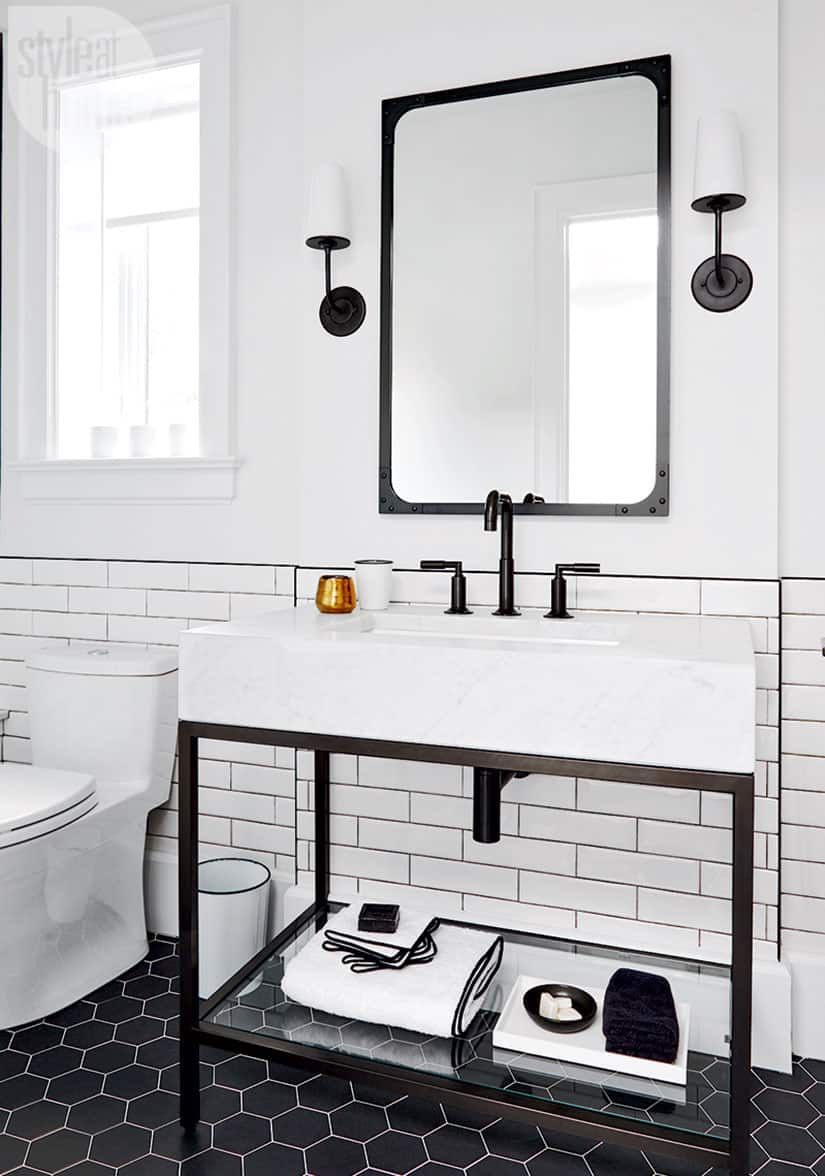 A dynamic explosion of hexagonal and subway tiles gives the third-floor bathroom edge. The contrasting grout as well as the blackened metal fittings, chair rail and sconces look sharp against the white backdrop. 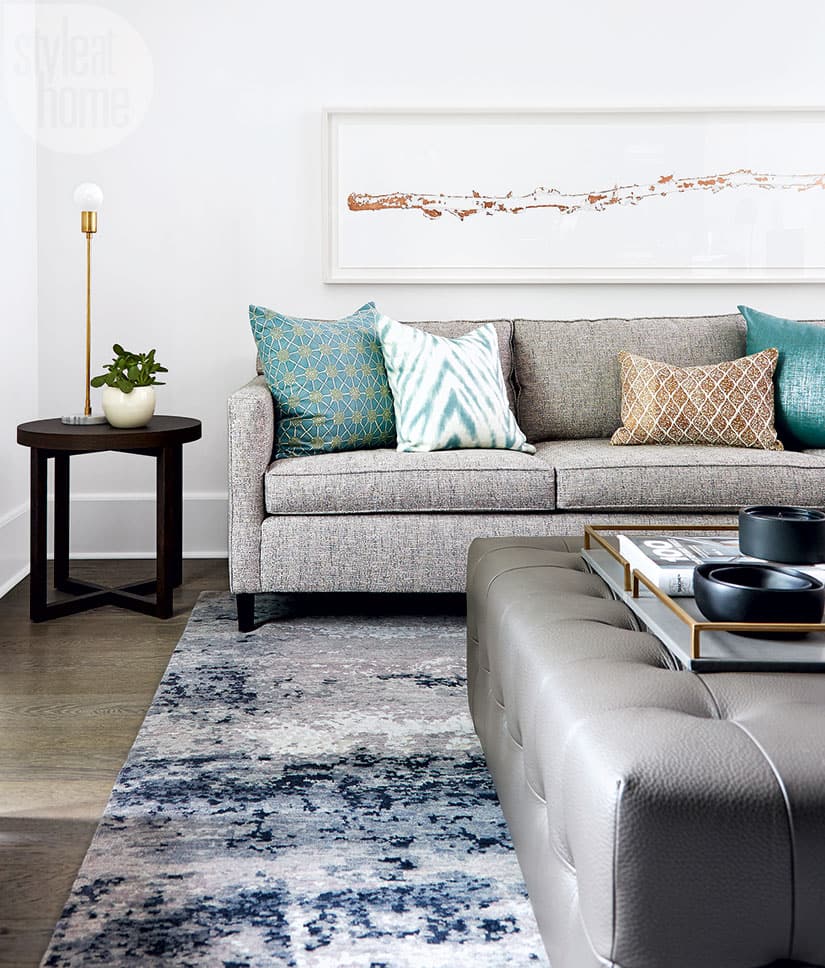 The long and linear print of birch trees (with hand-applied copper leaf) echoes the shape of the low-slung sofa, which is clean-lined to suit the quiet space. 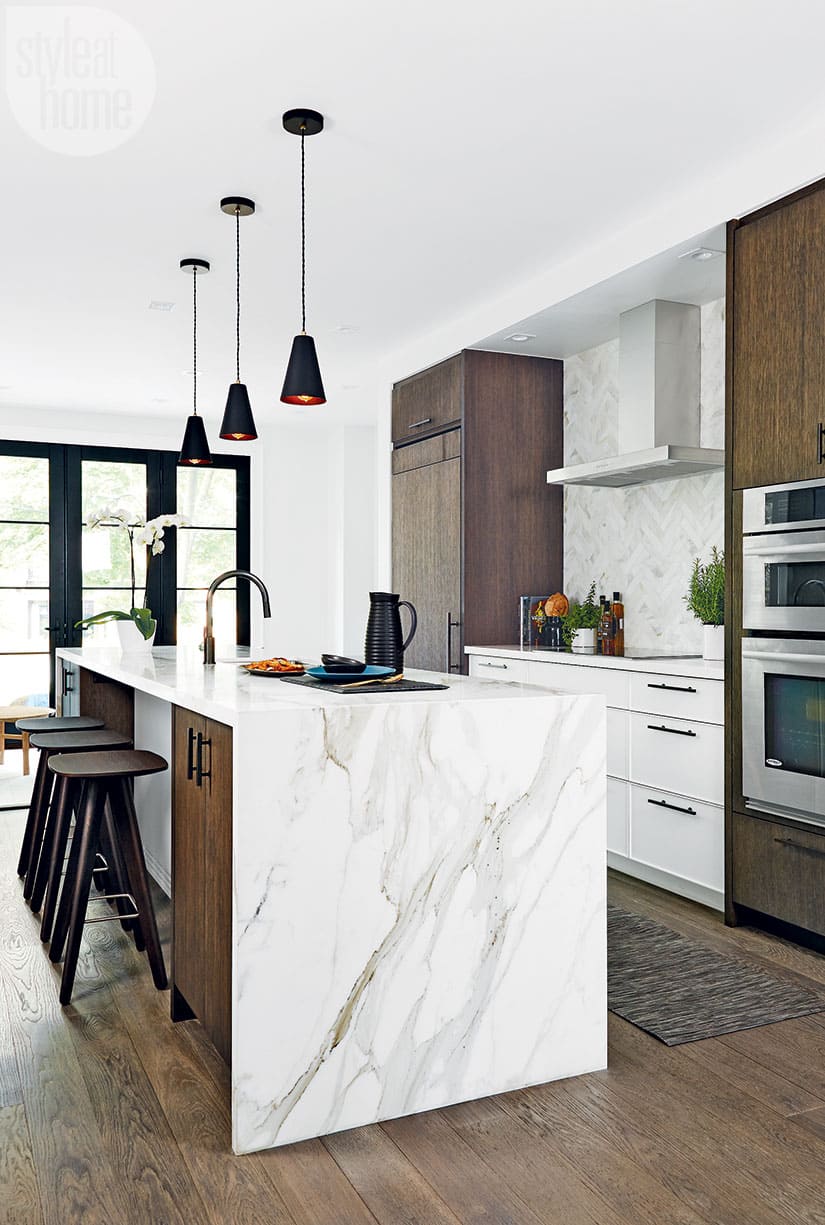 “I loved being able to customize the house to our needs,” says one of the homeowners. “My husband really loves the new kitchen.”

Get the modern moody look with these: 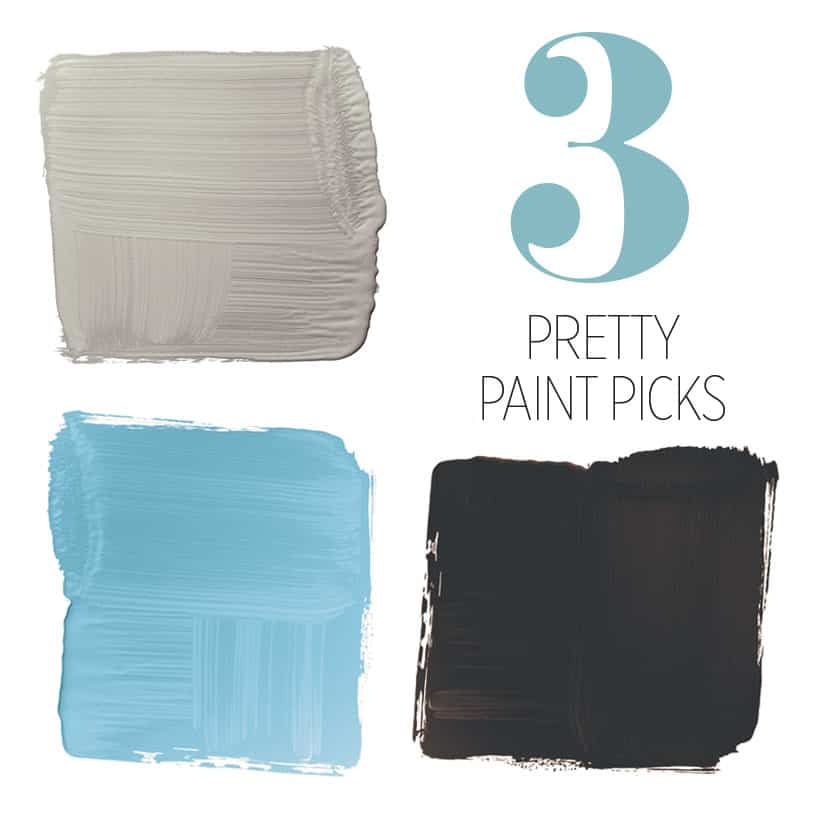