A designer lends her expertise to help a couple resolve a colourful debate over the scheme for their family cottage.

"He wanted dark tones and a woodsy Aspen vibe. I wanted everything white with clean lines." The “he” referred to is the husband, the “I” speaking is the wife, and in terms of their decor preferences for this new-build 4,900-square-foot cottage overlooking Lake Simcoe in Innisfil, Ont., they were clearly at odds. But the Toronto-based couple, who has a seven-year-old daughter, a five-year-old son and a Samoyed puppy, did agree on one thing: The design had to be practical. And after many reassurances on the wife’s part that her vision could be inviting and relaxing, she says, “My husband eventually gave me free rein. I wanted a gorgeous unfussy space that was easy to maintain.”

To get the look, she turned to Lidia van Zyl, a designer based in Barrie, Ont., who’s well known for decorating waterfront properties in the area. “When I was hired in 2014, the cottage was in its planning stage,” says Lidia. “This allowed us to pore over the plans and confirm almost every detail before the walls went up.” The walls themselves played a crucial role in setting the tone for the space. “Honouring the husband’s preference for a traditional look, I incorporated shiplap into the mix,” says Lidia. The wooden boards, which were most often used in the construction of homes, were applied horizontally in the kitchen, powder room, foyer and master bedroom. “Shiplap, even when painted white, provides a rustic contrast to drywall and has an informal feel that really adds to the casual cottage vibe,” says the designer.

While the scheme may be all white, it’s anything but stark. “The key to decorating with white is to use different shades of it,” says Lidia. “If you look closely, you’ll see the walls are a crisp white, while the beams are coated with a warmer shade.” Wide-plank pale hickory flooring completes the airy backdrop, which Lidia chose to punctuate with bold hits of black. “I love contrast, so I added black accessories to almost every room,” she says. Lidia extended this theme to the furniture as well and, with the kids and puppy in mind, paid specific attention to practicality. “The grey sofas in the living room are covered with indoor-outdoor fabric, so they’re stain resistant and easy to clean,” she says. “And some of the pieces, such as the living room coffee table and foyer console, are crafted from steel, so they’re pretty much damage-proof.” She also introduced a few well-placed antiques throughout the cottage to create interesting tension between old and new.

The 18-month process of building and decorating netted a year-round family retreat that Lidia describes as “refined but rustic.” And even though the wife had total control, she did make an effort to include her husband – sort of. She says: “He really wanted dark floors, but even he conceded the light ones looked better. So I let him think he helped with that decision in a roundabout way. Now we’re all happy!” 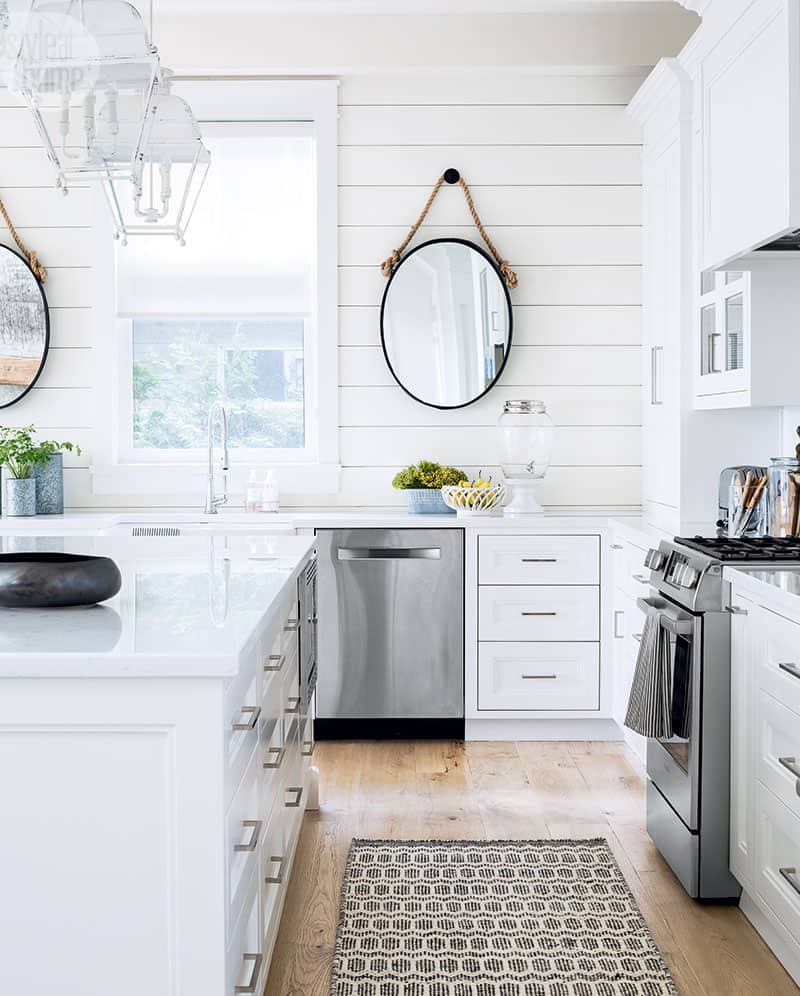 Accessories like the rope-hung mirrors and the lantern-style pendant lights make this practical space feel decorated. “I don’t like to take risks when decorating,” says one of the homeowners, “but I did want to mix things up in the kitchen so it didn’t read as plain.” 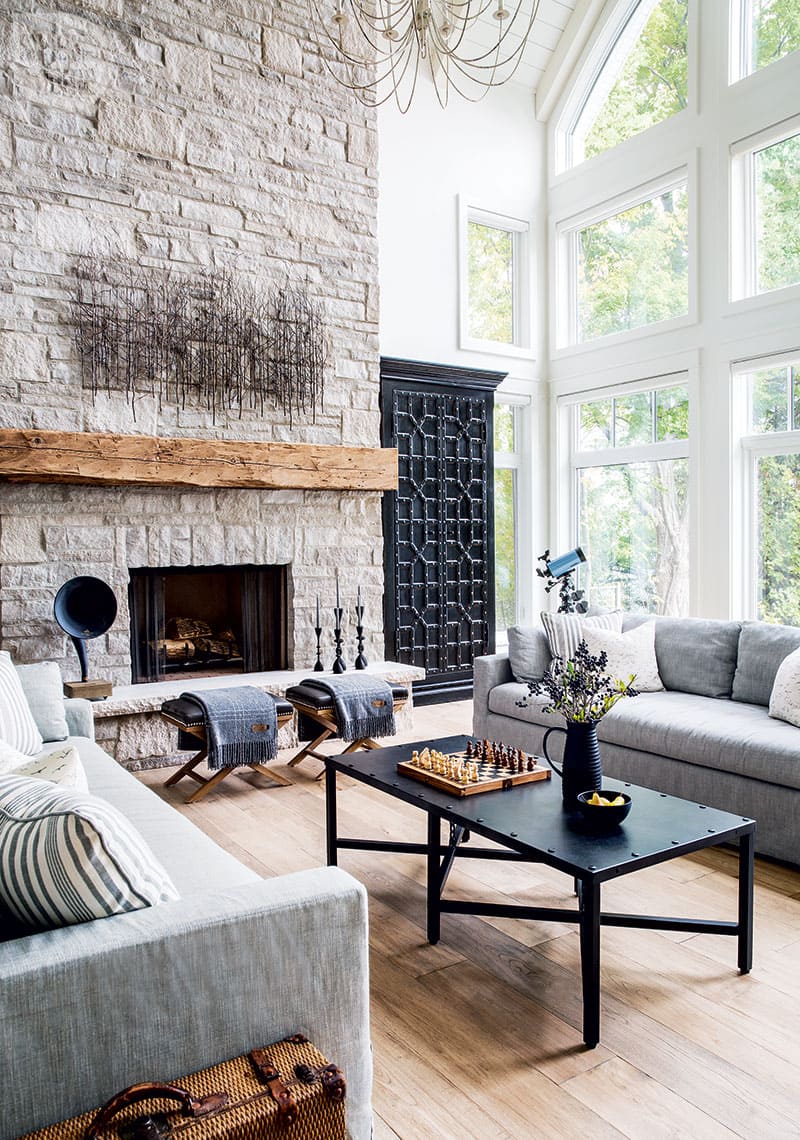 Designer Lidia van Zyl played the natural tones of wood and stone against sleek black accents to create character in the living room. The tall armoire holds things like games, books and blankets, while the bare floor, a practical option, is easy to clean. A trio of metal sculptures above the reclaimed wood mantel is a departure from the expected mirror or artwork. 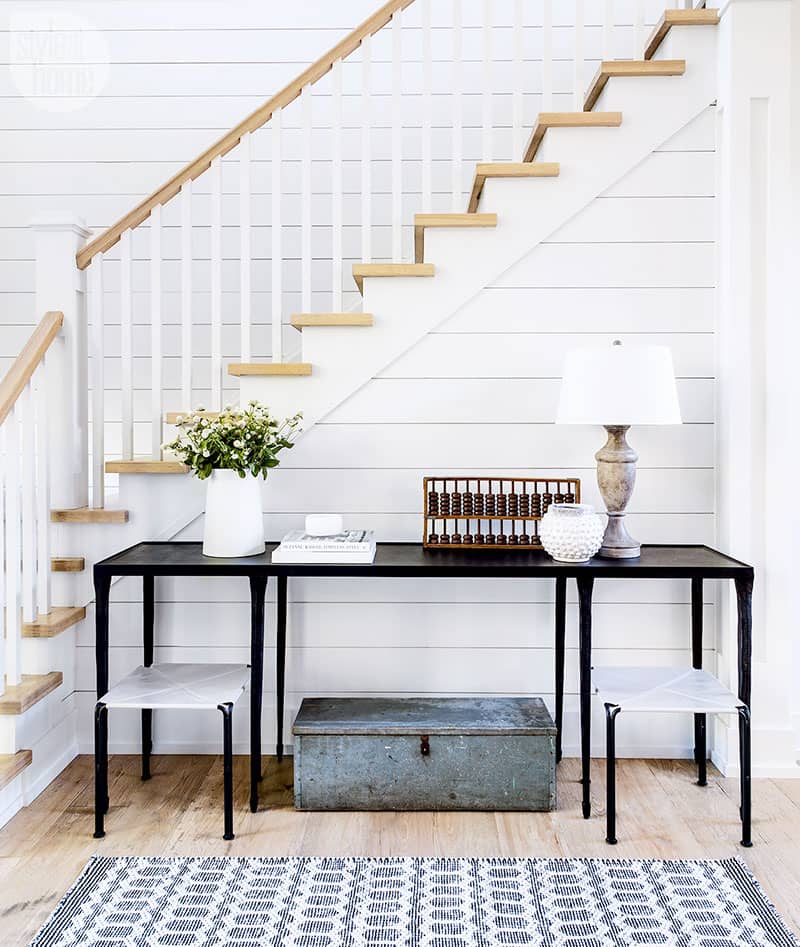 In the foyer, the staircase’s natural wood handrail and treads were a purposeful choice. “If we had painted them black, it would have drawn the eye up the stairs as opposed to straight through the cottage to the lake,” says Lidia. 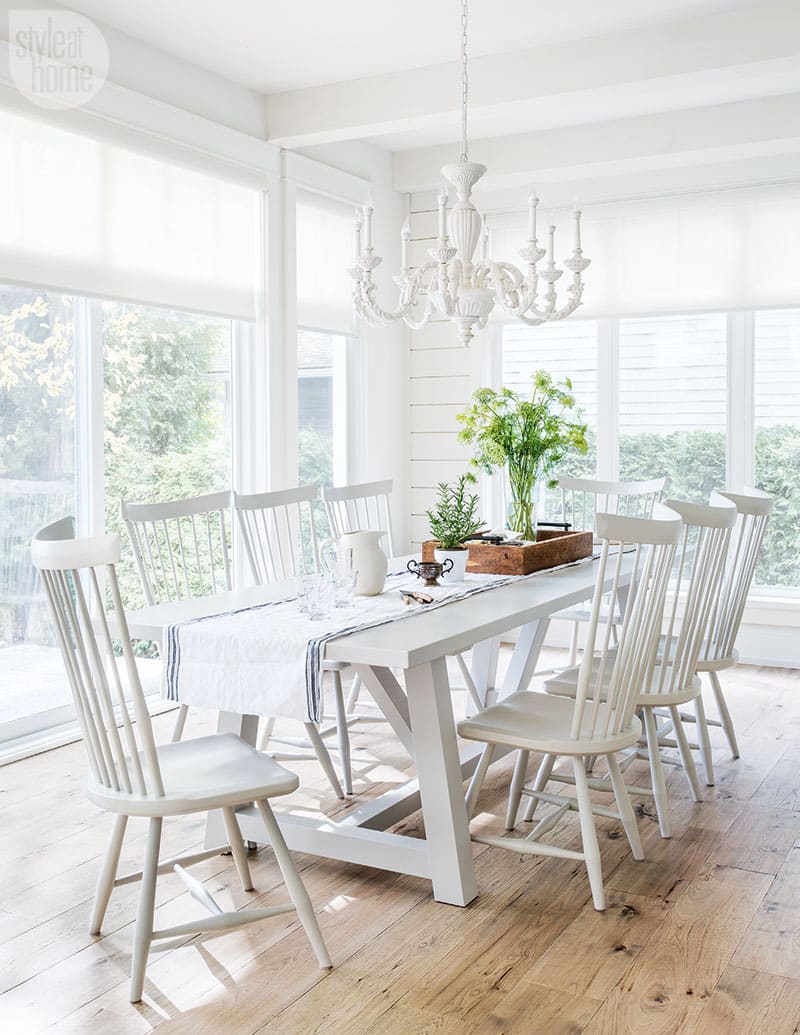 A mix of neutral tones creates subtle depth in the dining area. “The table and chairs appear white at first glance, but they’re actually a soft shade of grey,” says Lidia. the chandelier, painted white to downplay its ornate shape, illuminates everything from meals to crafts. “This cottage always makes me smile,” says one of the homeowners. “It’s an amazing feeling to open the front door to beautiful surroundings.” the stone skirting – a concession to the aspen look the husband wanted – ties in nicely with the herringbone brick walkway. 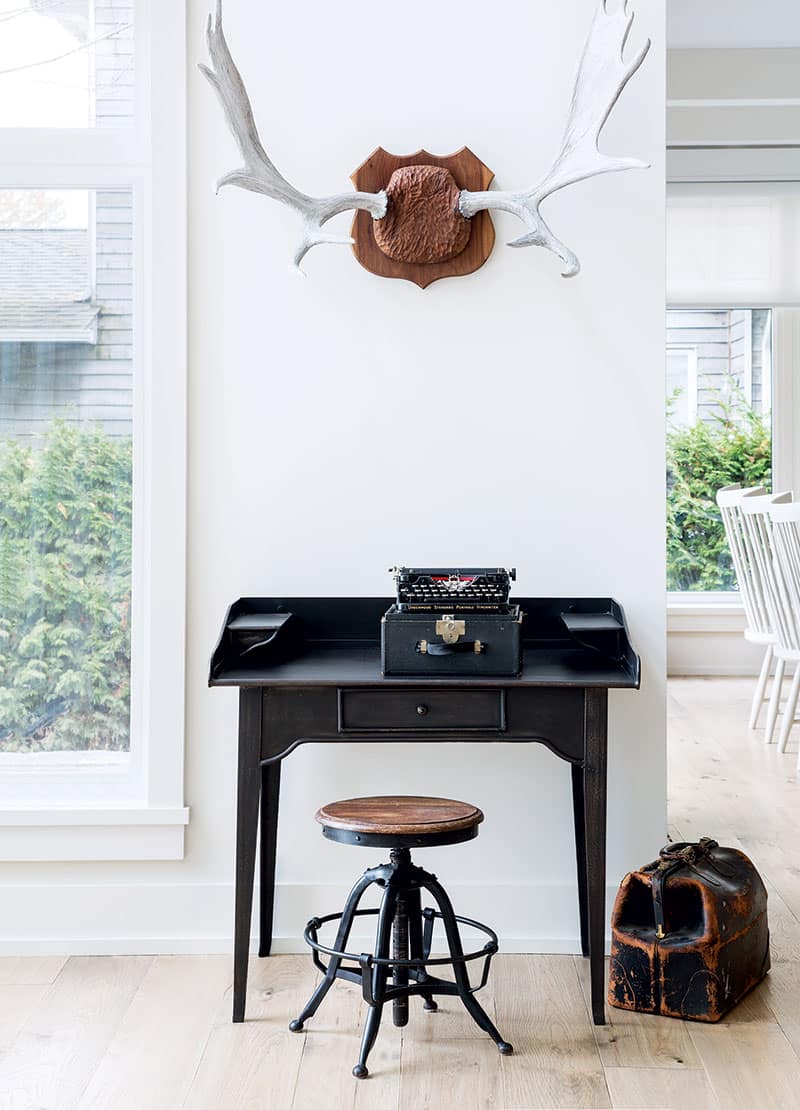 The artful arrangement of dark-hued antiques in an all-white area of the living room makes a graphic statement. the antlers are a family heirloom. 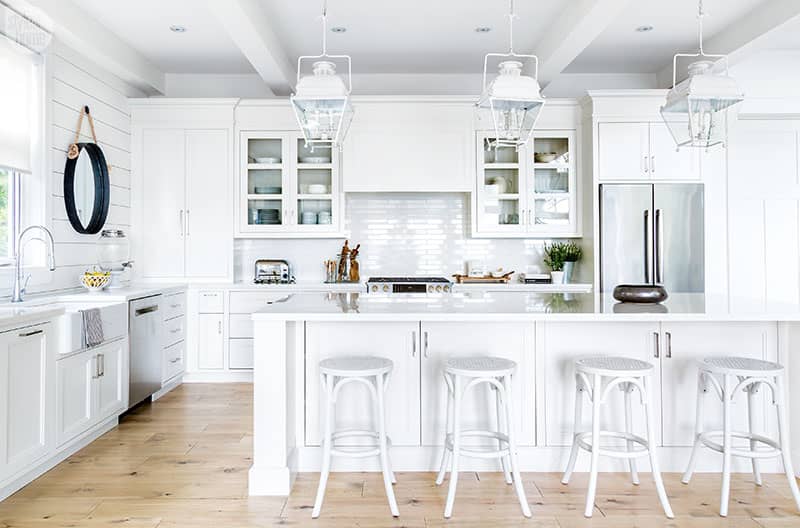 “I love a white kitchen because I don’t like distractions when I’m cooking,” says one of the homeowners, “and I can also see what needs to be cleaned.” low-maintenance Caesarstone countertops and a glossy tiled backsplash on the range wall make cleanup even easier. the massive island is outfitted with cupboards that hold cottage necessities, such as candles, batteries and a tool kit. 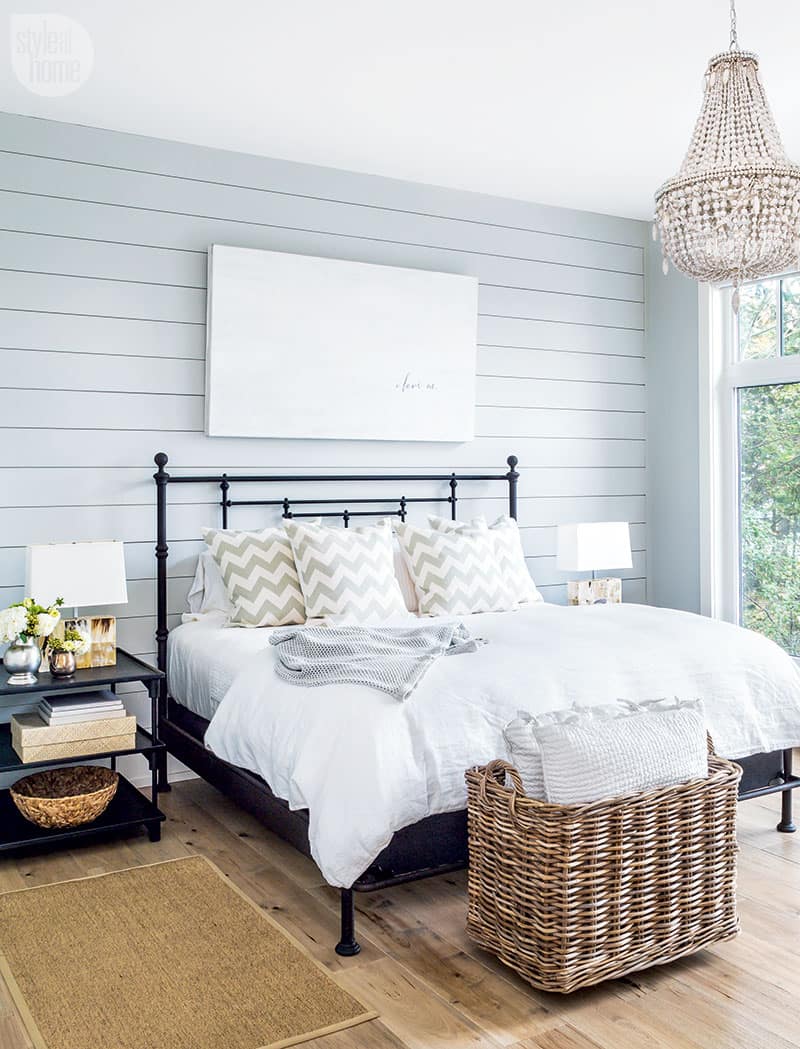 While the silhouette of the chandelier in the master bedroom is traditional, its wooden beads give it an earthy appeal that suits a cottage. the wicker basket, sisal rug and rustic artwork (it’s made of wood and says “I Love Us”) echo that earthiness, which is tempered by the black furniture. 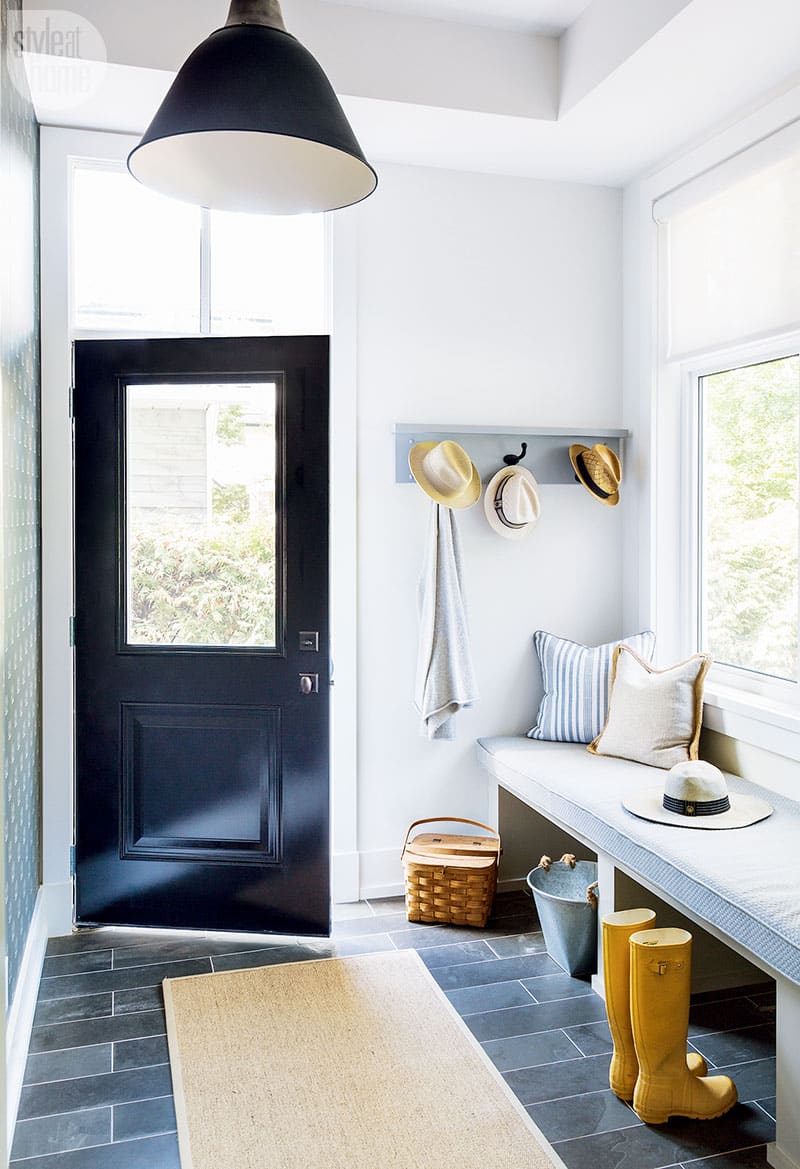 Hooks and baskets are enough to keep the mud room in order since the basement has ample storage. The built-in bench always comes in handy. 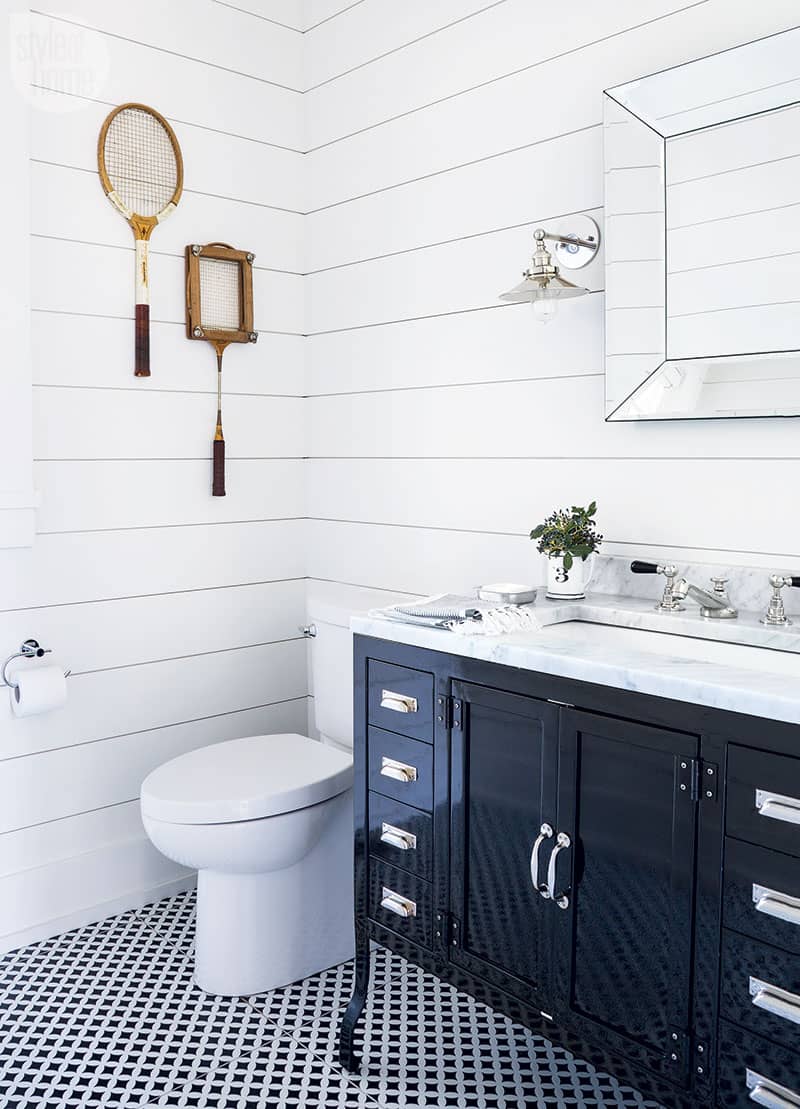 Like the rest of the cottage, the powder room is energized with hits of black. “I love the graphic mosaic-look floor here,” says Lidia. “It’s actually 24-by-24-inch tiles, and they have just the right amount of pattern for a small space.” Vintage racquets used as informal artwork perfectly fit the laid- back vibe of this family retreat.