Share
Share
Calling to mind endless seaside views and warm breezes off the shore, Sherry and Richard Ellison's renovated kitchen design feels like a light-filled retreat that captures the spirit of laidback living. What's surprising is its location. Not, in fact, a romantic coastal cottage, but instead a rejuvenated century home surrounded by land in the small town of Alliston, Ontario.

"When we first moved in, there was a tub and shower in here, and the walls were all wonky," says Sherry of the kitchen that came with the house eight years ago. "We had to do something fast!" A quick refresh was in order, followed by renovations of other rooms (including converting four tiny bedrooms to three plus a bathroom) while the couple thought about what they really wanted in the kitchen.

To a pair who practically live on their sailboat during the summer, and often spend vacations on the Mediterranean and along the U.S. coast, the desired look was a reflection of that preferred lifestyle. "Most of the house is done in a Cape Cod style that's really airy and fresh," says Sherry, who owns Details, a home decor shop in town. "I love the kind of space that looks like an ocean breeze has just blown through," she adds. The couple envisioned a dream kitchen, with walls and ceiling of beadboard, unadorned windows, wood floors and lots of natural light streaming into the room through the day. 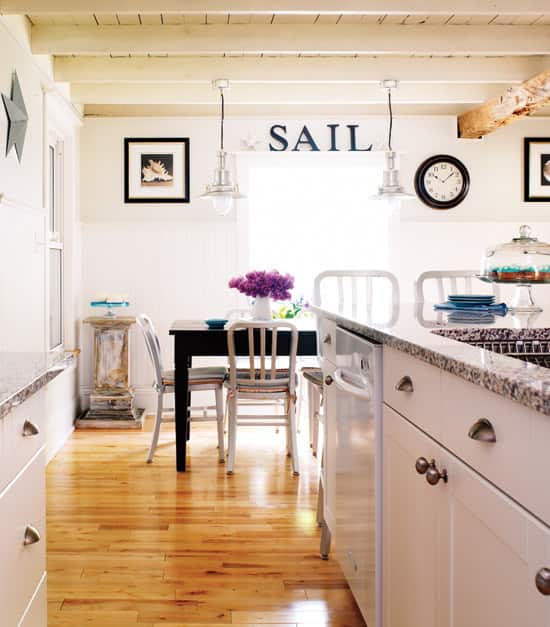 Renovated cottage kitchen The renovation was a labour of love and, with the exception of the beautiful granite countertop that was professionally installed, the pair did all the work themselves once Richard, a contractor, had enough downtime to devote to the project. In several short weeks, the Ellisons removed cabinets, took up tiles, relocated plumbing, levelled the floor, ordered appliances and had a rich hardwood floor laid, as well as new cupboards installed. Sherry and Richard decided against modern stainless-steel appliances and opted instead for white to create a clean, seamless look. Watery sea shades add to the pretty, relaxed feel of the space. 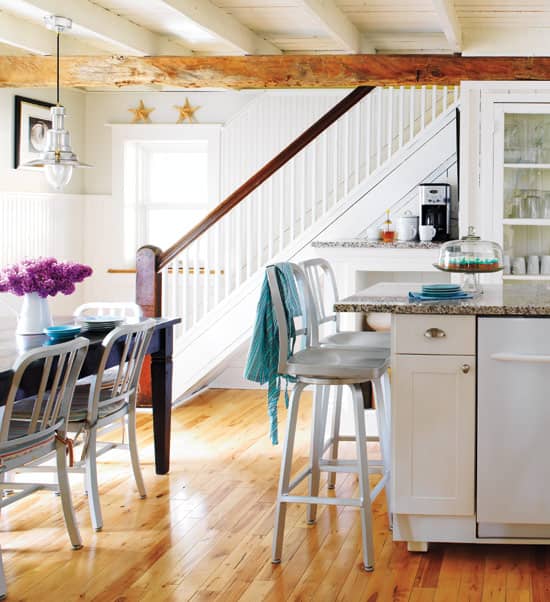 Salvaged goods Richard, who is very fond of using reclaimed wood, is known to cart discarded materials home from other job sites; old windows were given new life as cupboard doors here, and a beam transplanted from a rundown barn is placed so it looks like it's been part of the house forever. Through his use of salvaged materials, the room is filled with features that, while not original, truly belong in the space. 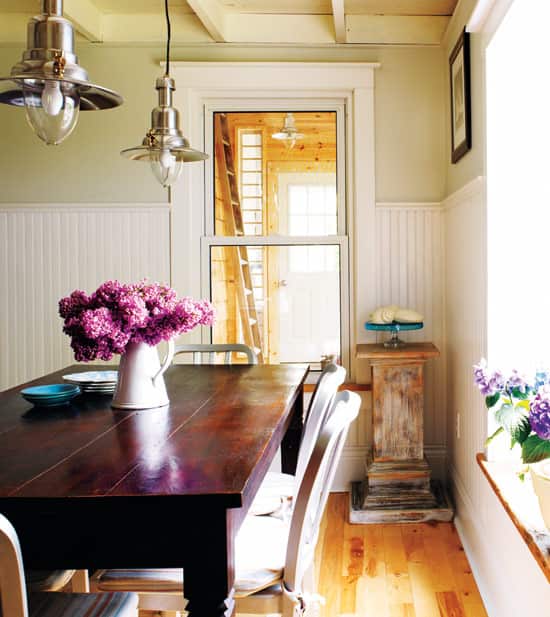 Dining area Surprising touches are found in the nautical metal accents—the industrial light fixtures from Ikea and aluminum chairs from Sherry's shop. "They were designed by the navy in the last world war," she says. When paired with cozy seat cushions that add the barest hint of feminine appeal, the look is soft and fitting.

With its seaside style and wide expanse of land on the other side of the windows, Sherry says the home offers everything the couple desires in a convenient location. "It's our little oasis in the middle of town."