For nearly 235 years food has been prepared in this maritime home. But never has it been so easy, or looked so great.

Time is measured by the tides in Shelburne, Nova Scotia, the weather reflected in the ever-changing skies above the fishing vessels that bob in the harbor. For homeowner Anne Slater, this is just as it should be, which is why, in 2016, she purchased a Dutch Colonial home there. Built in 1784, it sits perched with idyllic views of the water.

What wasn’t idyllic was the kitchen. Dark and cramped, it was a poor fit for an avid baker and cook like Anne. “The whole room was dominated by a huge double-wide wooden island with built-in appliances. Heavy wooden cabinets from the 1980s were hung in awkward places, and provided little storage. And the ceiling, which had been dropped—twice—was uncomfortably low.” she explains. Even the lighting was dim with only two small pot lights over the stove. And there was no exhaust hood. “So, even making tea caused a lot of condensation,” said Anne.

Yearning for a function-forward kitchen that would retain the historic character of the home, Anne reached out to designer Carol Reed. This would be no small design challenge. The kitchen’s footprint, which was riddled with windows and doors, offered precious little wall space. The old floors were decidedly sloped. And a brick chimney, part of a defunct hearth, jutted awkwardly into the room. What’s more, the pantry area comprised a separate room.

Carol was undeterred. She began by taking the room down to its studs (something that revealed an amusing assortment of oddities, including a clay pipe, a newspaper, and two old teeth hidden in the walls!) and tore out the dropped ceilings to expose the home’s original hand-hewn beams. She also designed custom cabinetry, and brought on local carpenter, Nick Bell, for the fabrication. The cabinets featured simple lines and hand-painted finishes to honor the history of the home, and each cupboard was custom-built to reflect Anne’s specific cooking needs.

To maximize function, Carol created a series of thoughtful work zones, including a baking area with a lowered counter, ideal for rolling dough; a cozy cooking niche with a 36-inch commercial-style ranged nestled in a heart inset; ample storage with plenty of pull-outs; a handsome island with seating and a prep sink; and a full-room pantry with serving area. 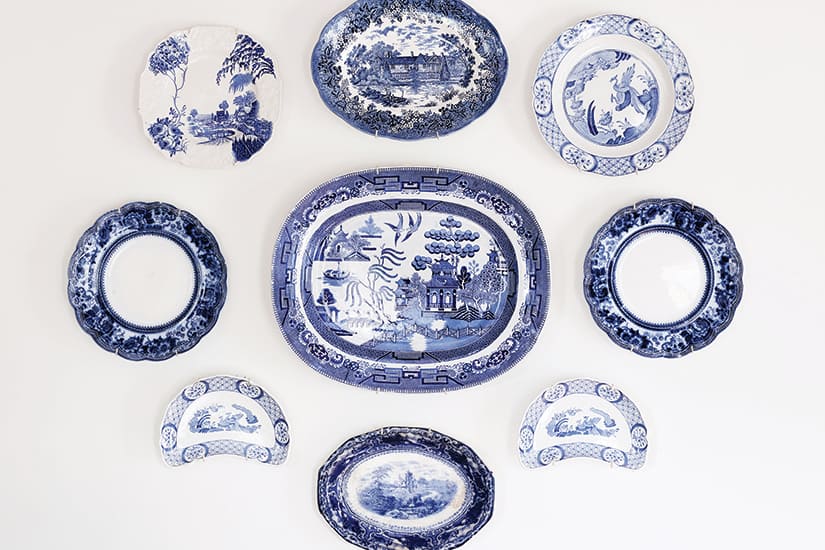 Carol is a proponent of utilitarian beauty. Anne’s blue plates play to the nautical palette and historic character of the home. And best of all, didn’t add any costs to the project. 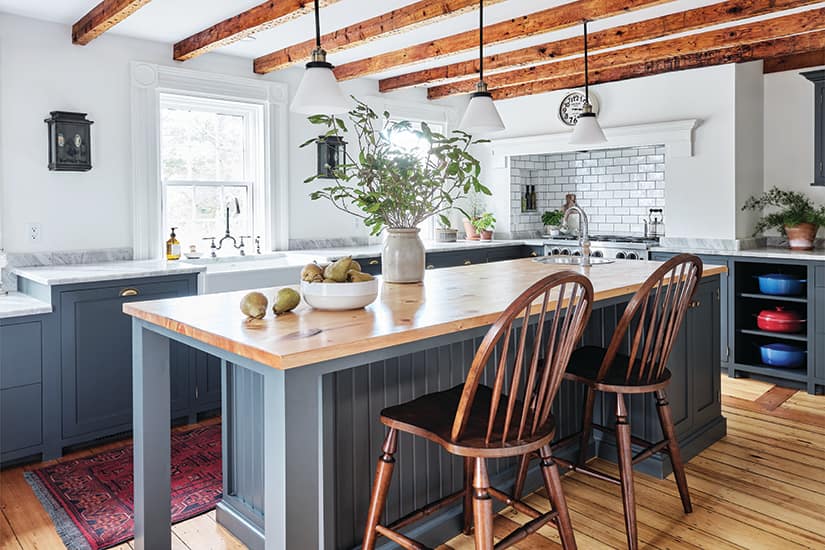 Morning snacks and casual dinners are commonplace at this kitchen hub. Reclaimed wood was selected to top the island. The cabinets are hand-painted with a low sheen. For texture and architectural interest, Nick finished the back with V-groove millwork, and added a baseboard. At the far end, a perpendicular cabinet stores cookbooks.

Simple task lighting illuminates the area without being obtrusive. 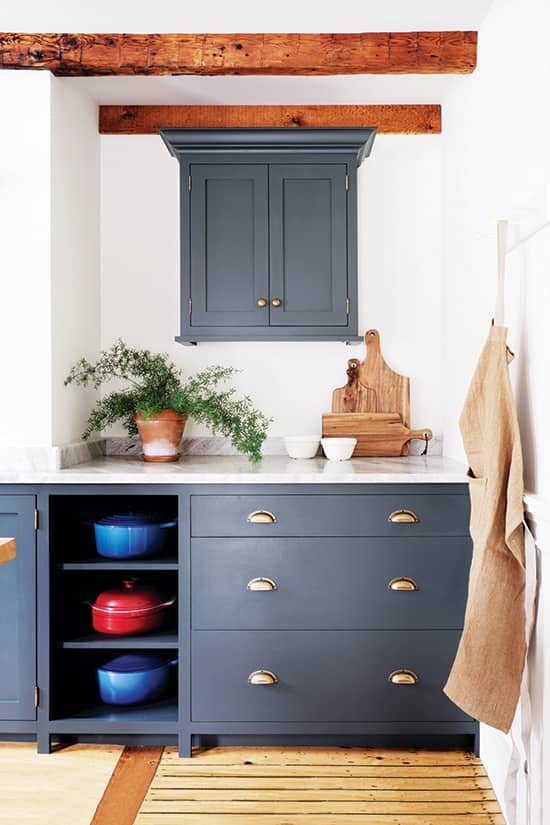 There are no upper cabinets in the kitchen, but the spice cupboard is an exception. Its doors swing open for easy access. Carol hung it adjacent to the range for convenience. The roll-out drawers store the larger cookware and serving pieces. Durable and not as porous as marble, honed quartzite countertops feature directional veining that Carol carefully matched to a softer curbed perimeter.

For the palette, Carol opted for nautical navy and white. These slightly modern hues served as a fresh counterpoint to the centuries-old wood floors and beams. Brass hardware provided a timeless sheen. And light-colored quartzite countertops backed by a white tiled backsplash were introduced to brighten up the space. 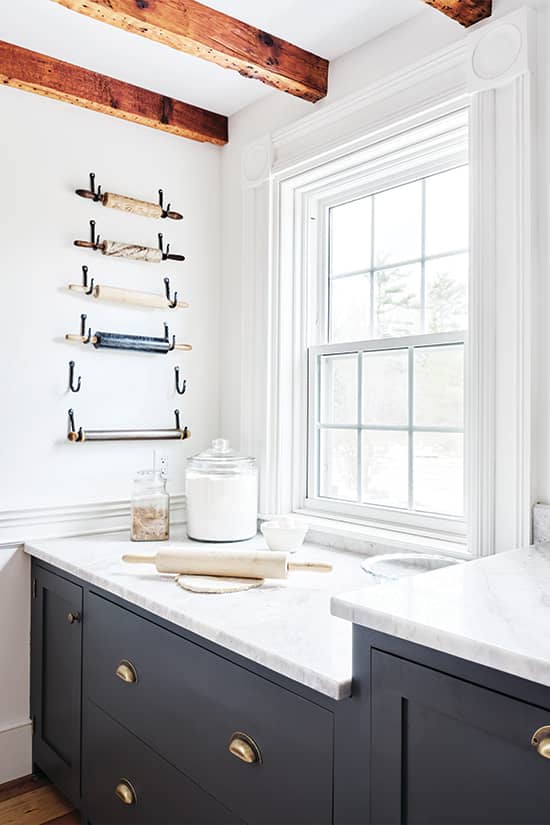 Throughout the kitchen and pantry, Carol’s design philosophy is clear: “Even the most utilitarian items can double as decor,” she said. Anne’s rolling pins hang on the wall like art, as do some of her favorite blue china plates. Baskets and cutting boards, objects with a purpose, shine here in their dual role as home accents.

Shortly after the renovation, her daughter and son-in-law visited from Toronto. The couple sat at at the island while Anne moved about in the kitchen. “What could be better than that?” 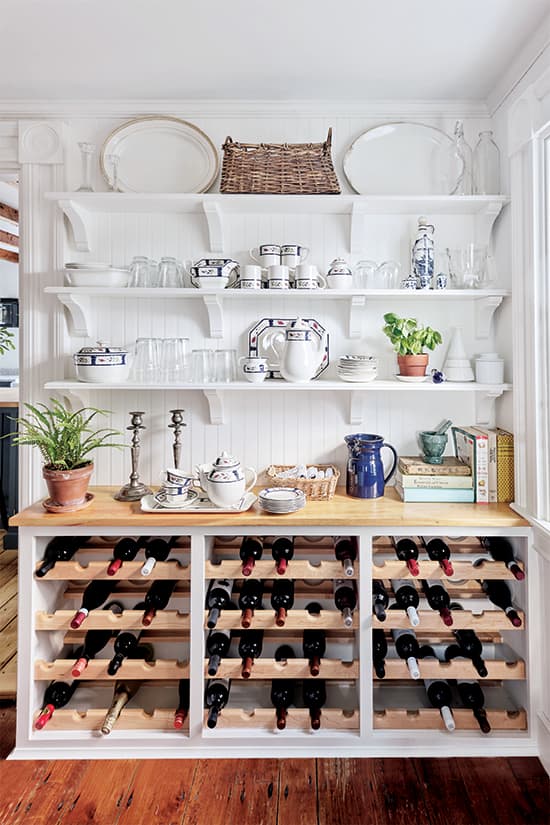 The pantry is just off the kitchen and adjacent to the dining room—a perfect place for wine. Carol and Nick embraced the antique sloped floors, adapting the cabinetry to its angles. The floors were sanded to a lighter color than the original. Nick replicated the home’s millwork to frame the door. Bead-board was added for wall texture.

Heritage by the Sea