This 2,800-square-foot two-storey house in Le Plateau-Mont-Royal, a lively borough in Montreal, wasn't always a light-filled modern architectural gem. The early-1900s property used to be a rundown duplex with a severely dated interior, but Bill and Erin Klein saw past that and knew they could create the exact space they wanted with some professional help. Four years after purchasing the space, the couple turned to architect Yannick Laurin, whose firm, La Shed Architecture, had already transformed many of the neighbourhood’s rowhouses. “La Shed has a good feel for the vibe of this area and knows how to give these places a sense of space and light,” says Erin. Good thing, since light was the main priority for her. The new open-concept layout, with an expansive kitchen and dining area featuring west-facing windows, was the perfect design for a growing family that now includes two small children. “While we’re making dinner at the kitchen island, we can still be part of the conversation and keep an eye on the kids,” explains Erin. “We couldn’t have asked for anything more.” 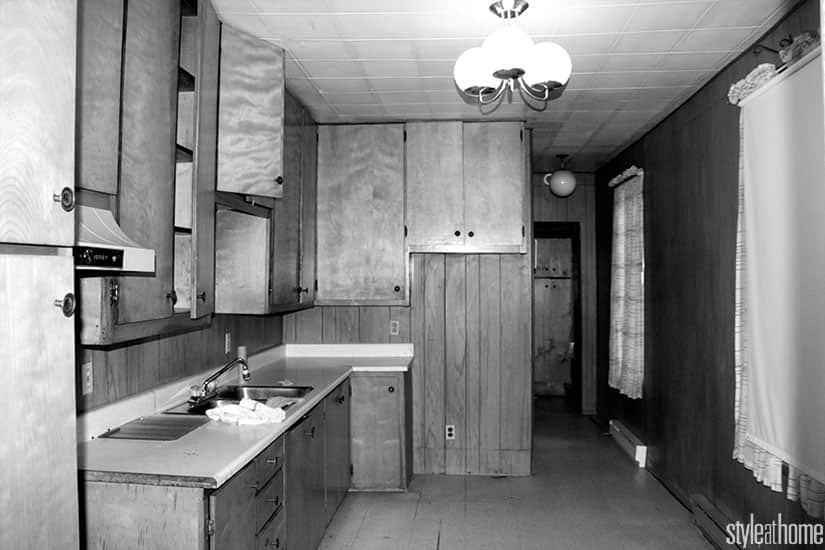 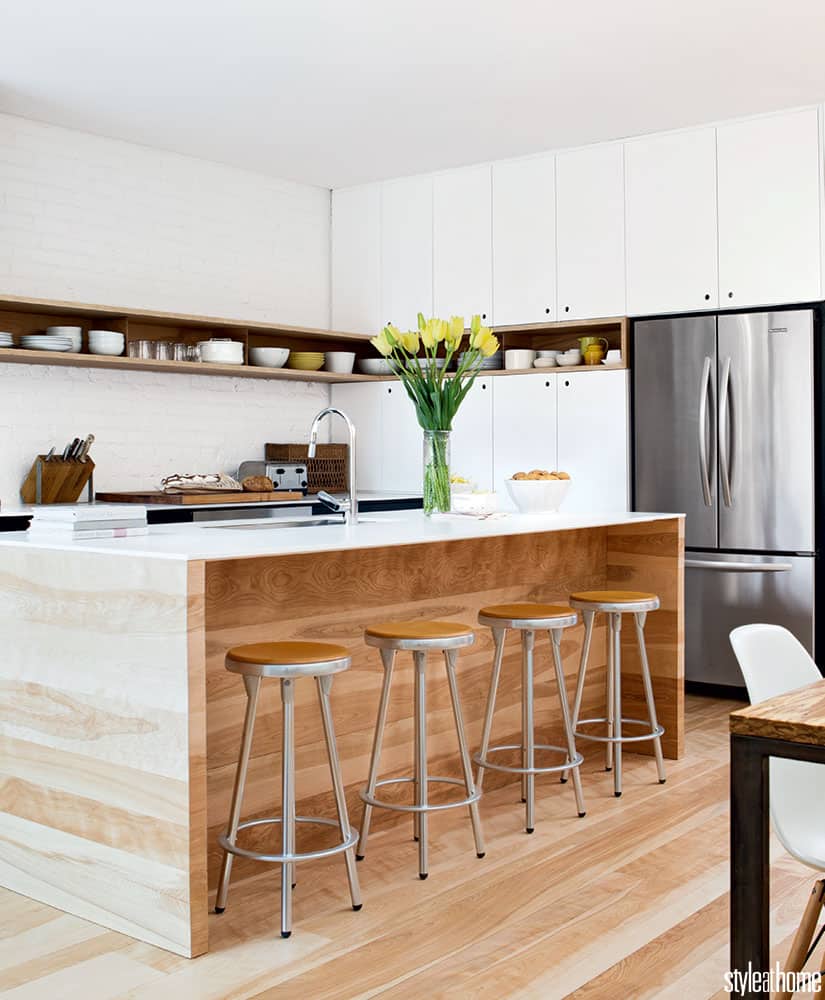 The island was designed to look like a solid wood block, with thick sides and an alcove for stools.

Then: With dropped ceilings and tiny windows, the back of the main-floor flat felt confined.

Now: Replacing the dropped ceilings with a smooth surface increased the space’s height by a foot, enhancing its airy vibe. The sustainable wide-plank birch floors also contribute to the light and spacious feel of the house. To create continuity, the same birch appears on the white Corian-topped island, which complements the less variegated birch on the nearby staircase. 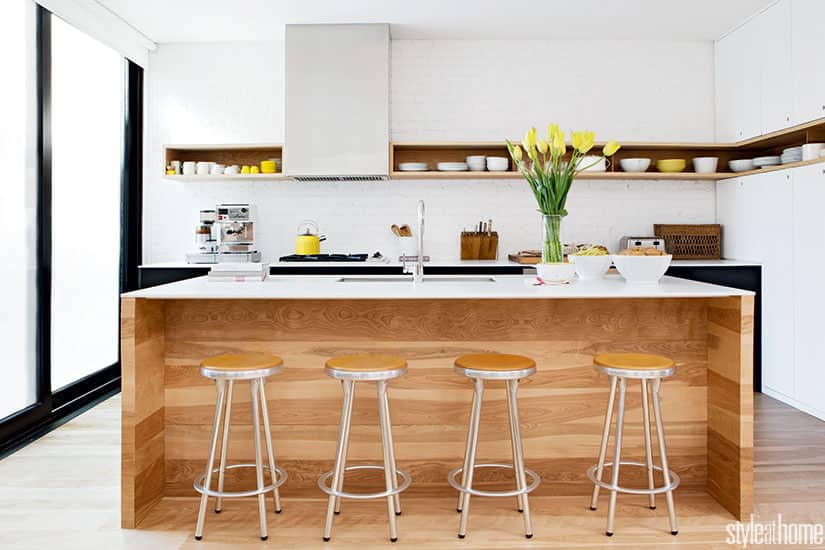 The original brick wall functions perfectly as a backsplash and provides a touch of history.

Then: There was limited connection between the living spaces and the backyard.

Now: On the main floor, light pours into the kitchen from black- framed floor-to-ceiling sliding doors, which lead outside. Black was also used on the lower cabinets to ground the space and to contrast all the white. The white-painted exposed brick wall above the Corian perimeter countertop acts as a durable backsplash and adds a nostalgic touch. The sleek custom range hood enhances the modern look. 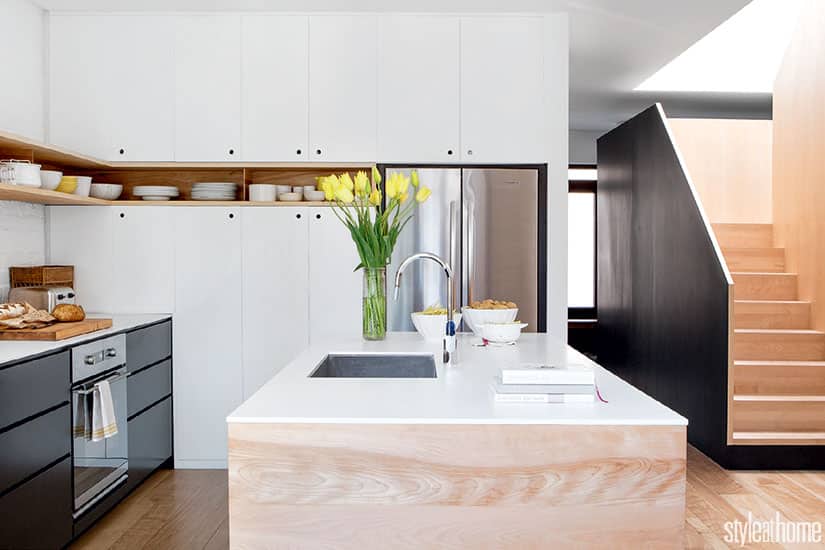 Then: The small front vestibule had two doors – one to the main floor and the other to a staircase leading to the second floor.

Now: The staircase, now a major architectural statement, was flipped and pushed further back to provide more space in the entry. “We made the outside black and the inside birch to resemble a cut piece of fruit,” says Yannick. The staircase’s wide upper opening allows natural light from the massive skylight to flood the two storeys. 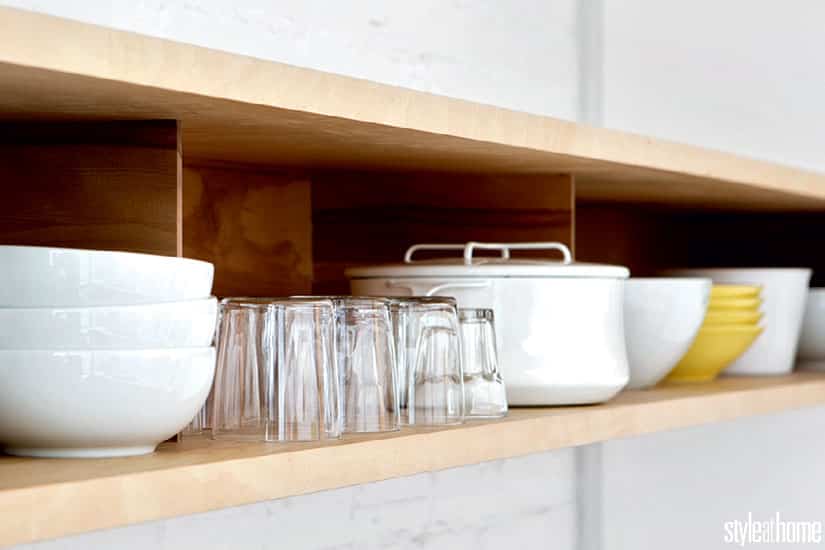 Floating maple cubbies help break up the expanse of white walls and cabinetry. 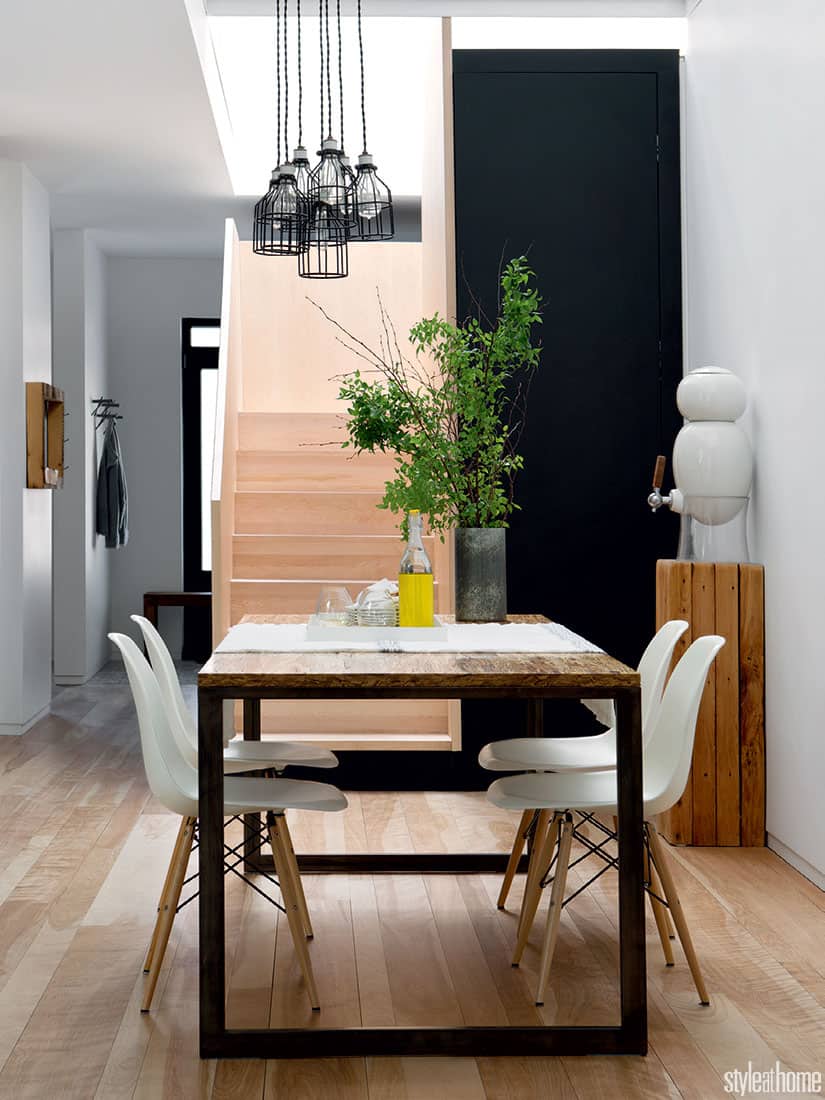 The multi-light pendant suspended over the dining table from the second storey visually connects the two levels.

Then: The view to the front of the house was originally blocked off; the main-floor entry opened onto a small living room.

Now: In the open-concept layout, the sculptural staircase connects the front of the house (a bathroom and small office) to the back (the kitchen and dining area). On the second floor, a white-painted perforated steel catwalk connects the corridor to the staircase. “We used perforated steel so it wouldn’t block the light,” says architect Yannick Laurin.