Inspired by its sublime setting, a designer decorates her cedar-scented P.E.I. cottage to celebrate the simpler side of Christmas.

Colourful baubles and flashy tinsel Christmas decorations can be loud. That might be fine for some, but designer Christine Dovey prefers a natural theme in her cozy log cabin in Stanley Bridge, P.E.I. “When you look out from my living room you see nature, trees and ocean,” says Christine. The tongue-and-groove Pan-Abode cabin is located on the shore of a bay where sand dunes stretch into the sea. “I wanted the Christmas decor to be raw, simple and imperfect.” As such, the designer foraged the grounds for garlands that adorn each window. The pink, rust and green palette is subtle and pretty. Vintage pieces, meanwhile, lend a storied feel. “I love mixing art to look interesting, curated and layered.” 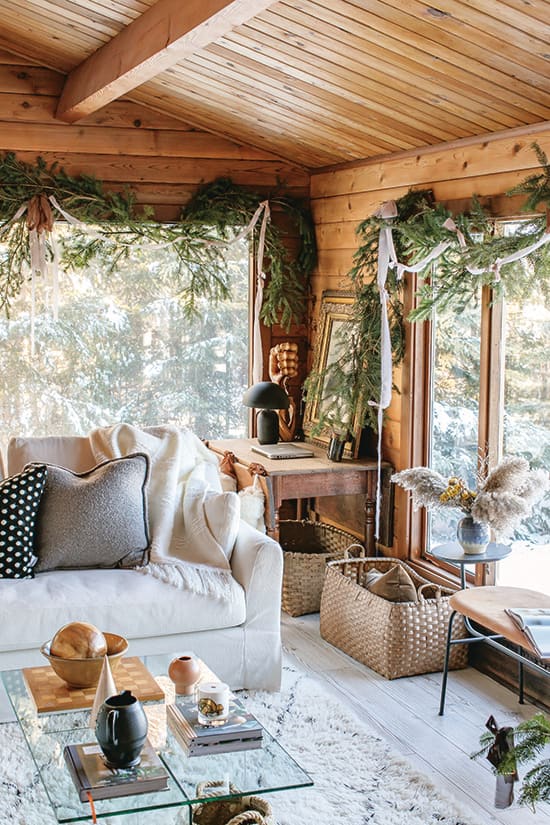 Cedar trees form a spectacular scenic backdrop in Christine Dovey’s cottage, where the rustic aesthetic has been carried indoors. “The boughs hung above the windows come from the trees all around us,” says Christine. “I strung them up with chicken wire and added frayed ribbon so the look felt natural.” Four plush stockings (one for each kid) pinned to a table is a smart solution when you don’t have a fireplace mantel. 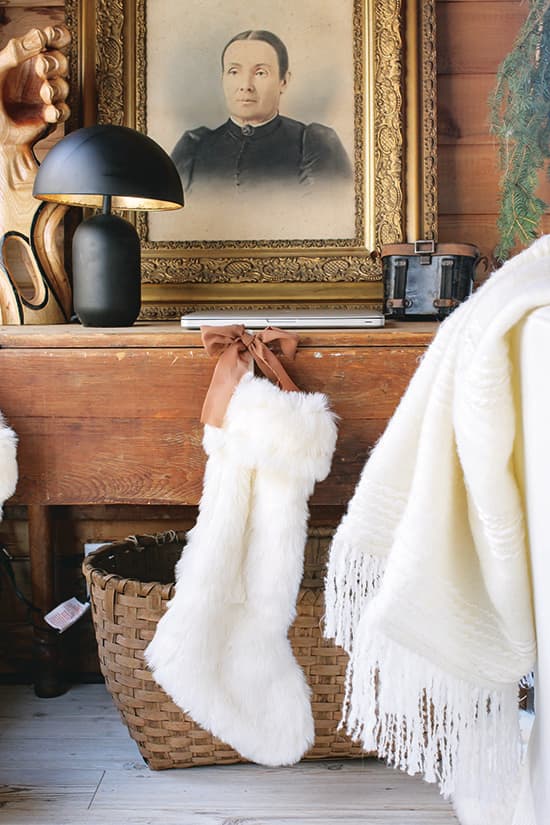 The Toronto-based designer has happy memories of summering on the island at her grandparents’ cottage, which was eventually passed down to her parents. When a cottage on the other side of the peninsula went up for sale last year, Christine and her husband, Ian, scooped it up. The couple has four children - Natasha, 25, Scarlett, 13, Malcolm, 11, and Jasper, 6 - and a sheepadoodle named Fable. “I wanted my kids to have the same experience as I had, with campfires on the beach, walks on red-dirt roads and games of horseshoe,” says Christine.

Before that could happen, though, the 800-square-foot cottage needed some serious updating and reconfiguring: “When you walked in the front door, you couldn’t see the view,” recalls Christine. A three-month overhaul by local contractor Quintin Etchell saw the removal of the green shag carpet downstairs and the light-obstructing walls upstairs, and the installation of new floors throughout. 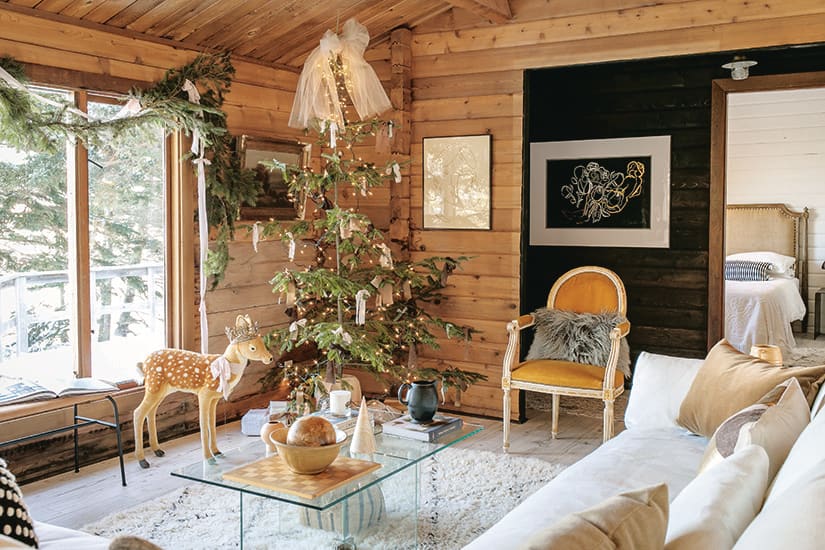 Charming in its simplicity, the spindly Charlie Brown tree is from Christine’s property. “I wanted to just let it be. There aren’t lots of ornaments, just lights, frayed ribbon bows and a bow of toile for the topper.” Triangular ornaments from Young Living add shine to the tree.

“We used lots of white paint, but not in the main area, which still features the untouched cedar logs,” she says. “It smells so nice. I love it!” 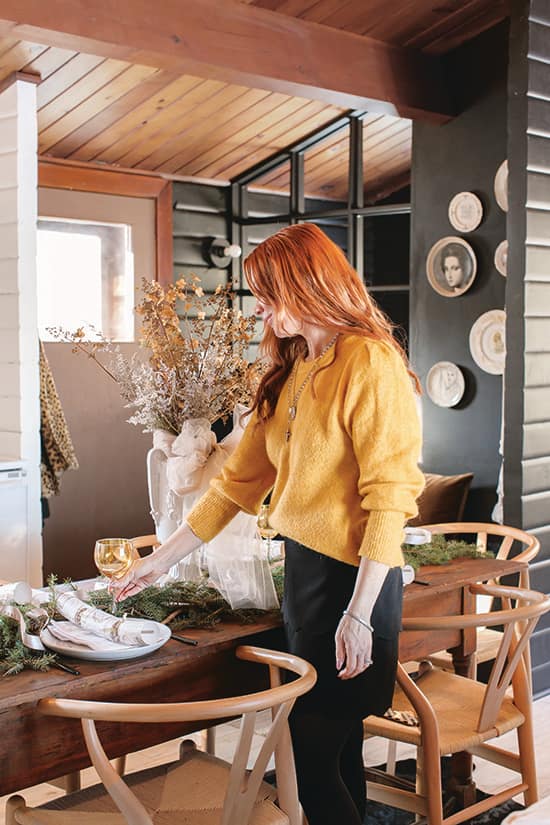 Last December, the family spent its first Christmas at the cottage. “It was amazing, I had never spent a winter in P.E.I. before,” says Christine, describing the snow-covered property as a peaceful winter wonderland. “You hibernate, play games and enjoy family time,” she says. “And you turn off the computer!”

A new black-painted vestibule with a door to the outside has replaced a hazardous staircase. The vestibule also works to divide the space, and features whimsical new and old plates displayed on the wall facing the dining room. The centrepiece arrangement is made of dried flowers and a blush-pink toile bow. An ersatz table runner was fashioned from pink ribbons and green boughs. “The plates are raw ceramic pottery, and the glasses are amber,” says Christine. “I wanted a tone-on-tone look that went with the cottage.” 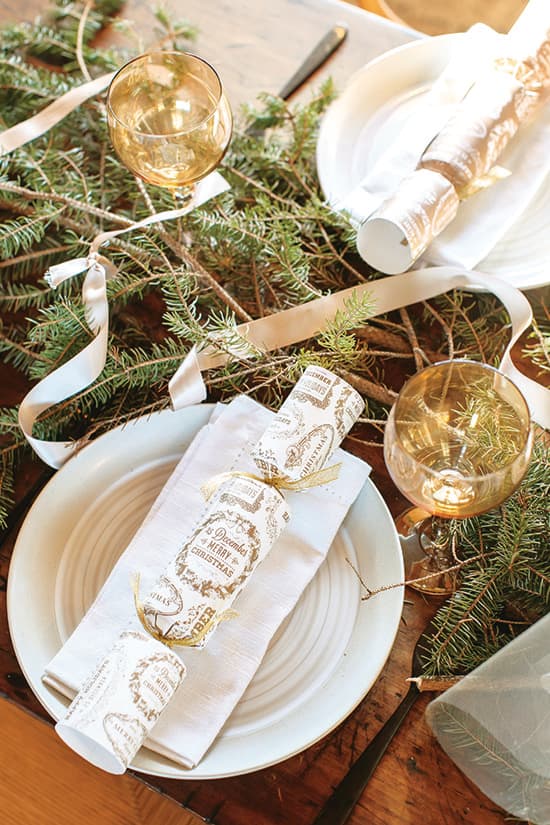