One designer helps a B.C. couple achieve the vacation home of their dreams.

We didn’t have to knock down walls. We had to put them up – and that almost never happens,” says designer Dan Vickery on the transformation of this small cabin on Hornby Island, B.C. A project he took on as one of the hosts of W Network’s new show Love It or List It Vacation Homes, the cottage was far from complete. Homeowners Jim and Lauren Wolf (he’s a city planner, historian and author; she’s the executive director of a not-for-profit organization) purchased the 700-square-foot space on a whim in 2005, and for the next 10 years, the New Westminster, B.C., couple spent vacations lovingly updating and expanding the cabin to suit their family, which includes 16-year-old son Griffin, Felix the Jack Russell terrier and Loonie, “a fat and fussy ginger tomcat.” They raised the existing structure and set it on a new concrete foundation; flipped the blue-stained siding to reveal its natural cedar finish; and added an Arts and Crafts-style porch to suit the artist-populated island. And they didn’t stop there: Jim and Lauren continued to enlarge the cottage, incorporating a full kitchen, extending the main-floor master bedroom (“so it could actually fit a queen-sized bed,” he says) and building a second level for more bedrooms.

“Jim is an artist at heart,” says Dan. “And while he’s great at starting projects, he’s not so great at completing them. When I entered the scene, the only finished rooms were the kitchen, bathroom and living area.” But, Dan clarifies, the flooring was mismatched, and the bathroom had an exposed water heater at its centre. In addition, the master bedroom had no insulation, and the entire upstairs was built only to the studs. The challenge – made even more difficult by the fact that the island is three ferry rides from mainland B.C. – may seem daunting to most, but Dan was in his element. “This was a fun project,” he says. “We just had to fix some construction issues and put up some walls to define the upstairs bedrooms.” (Ha! “Just.”)

“The hardest part,” says Dan, “was hunting down unique items that would speak to the character of the cabin, its artful setting and, especially, Jim and Lauren themselves.” Of the couple’s established style, he adds: “Every part of this place has a story. There are pieces from different vintage shops they’ve visited or vacations they’ve taken. There’s a sense of love and warmth as soon as you walk in.” So to continue the welcoming atmosphere, Dan sourced a lot of items from the Free Store, a Hornby Island spot where people can adopt others’ donated goods and building materials at no cost. It’s where Dan located stuff like the sheet metal (used as a textured wall treatment in Griffin’s room) and salvaged barnboard (turned into a herringbone headboard in the master bedroom, not shown).

The strategy was a success, because when it came time for Jim and Lauren to decide whether they’d keep this freshly renovated cabin or buy a new place (the premise of the Love It or List It franchise), it was a no-brainer: “The other properties couldn’t match the sweat equity that we had already invested and would never have our history so entwined in every corner,” says Jim. “This cottage is a part of our family’s story.” 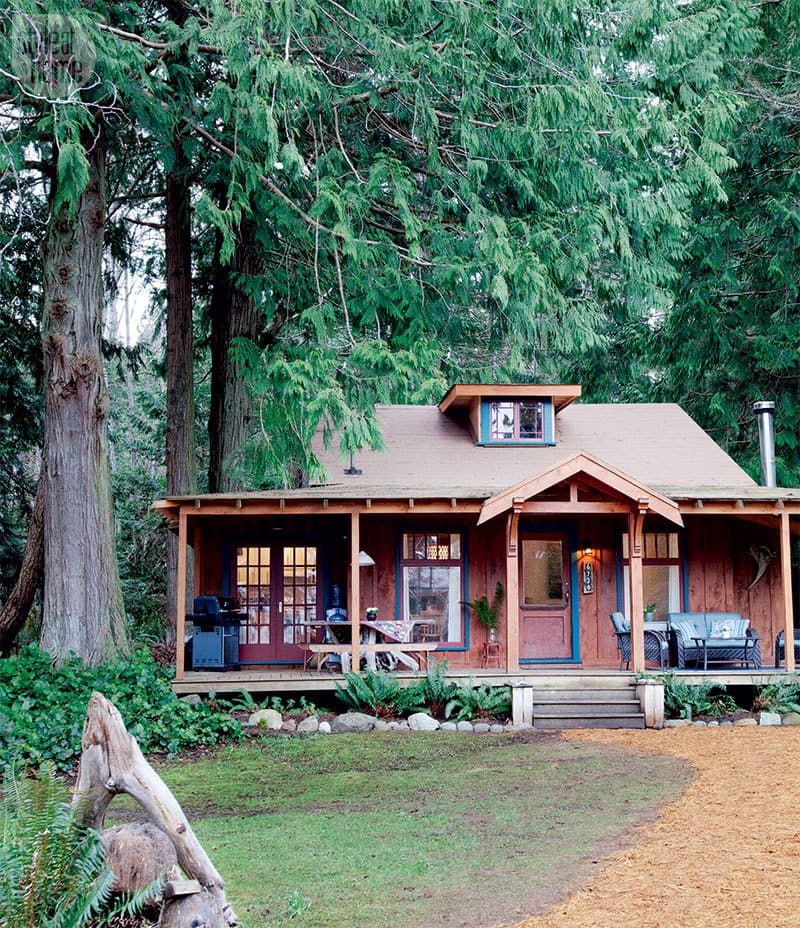 This cabin may be three ferry rides away from where Jim and Lauren Wolf reside in mainland B.C., but designer Dan Vickery brought the homeowners closer to their ideal vacation property than they could have dreamed. 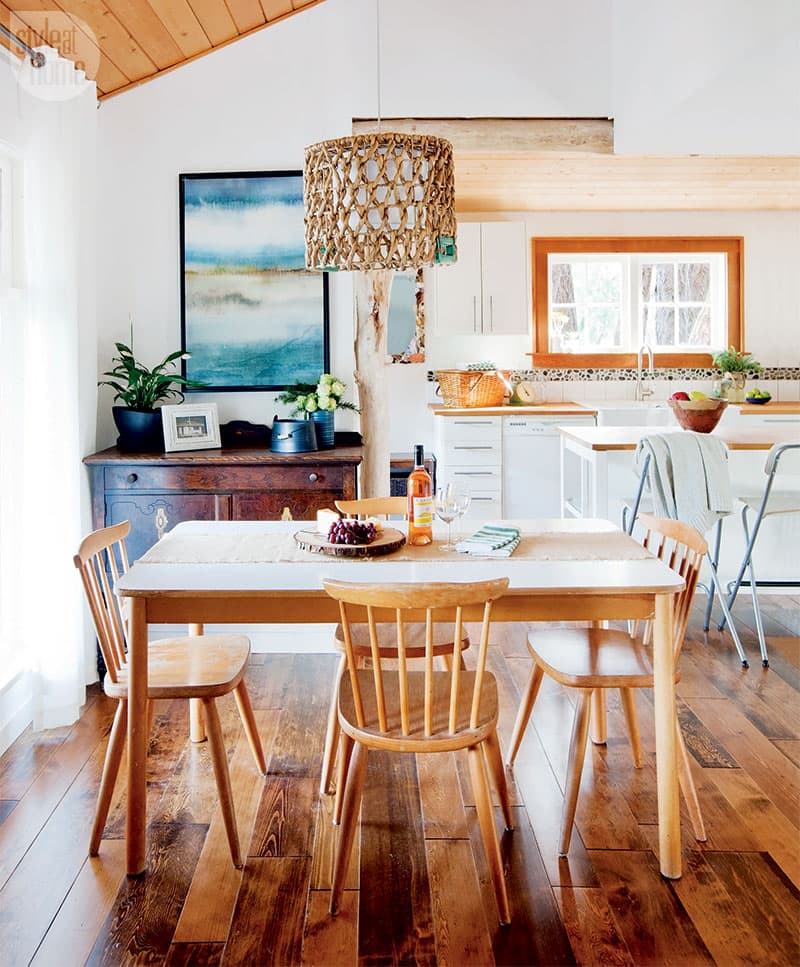 “Sometimes all that’s needed to define the different areas of a great room is a little bit of extra breathing space in between,” says designer Dan Vickery of the small open-concept main floor that features a living room, dining area and kitchen. In a clever twist on tradition, Dan used a basket as a shade for the dining room pendant light. 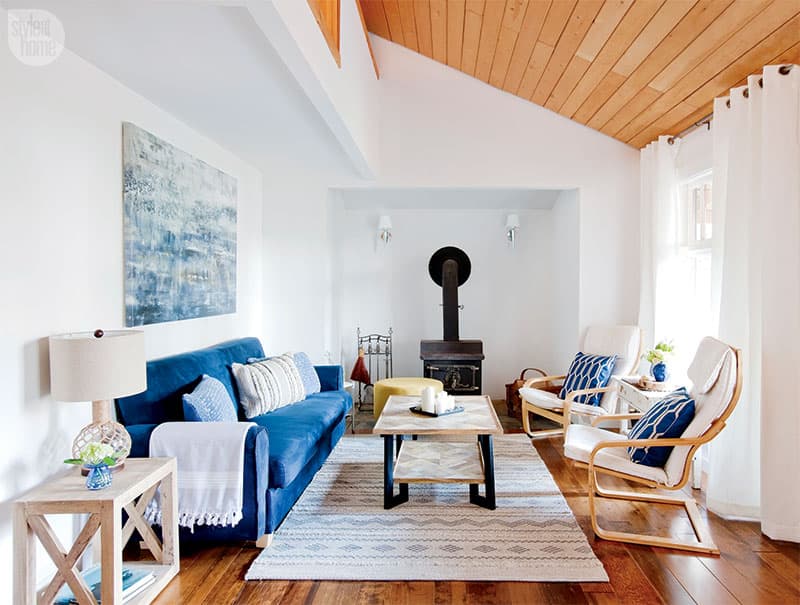 The light-filled living room was one of the more finished areas of the cabin when Dan arrived on the scene. Apart from the flooring and a few blue accessories (“I love that the homeowners weren’t afraid of colour,” he says), almost everything else here stayed the same. 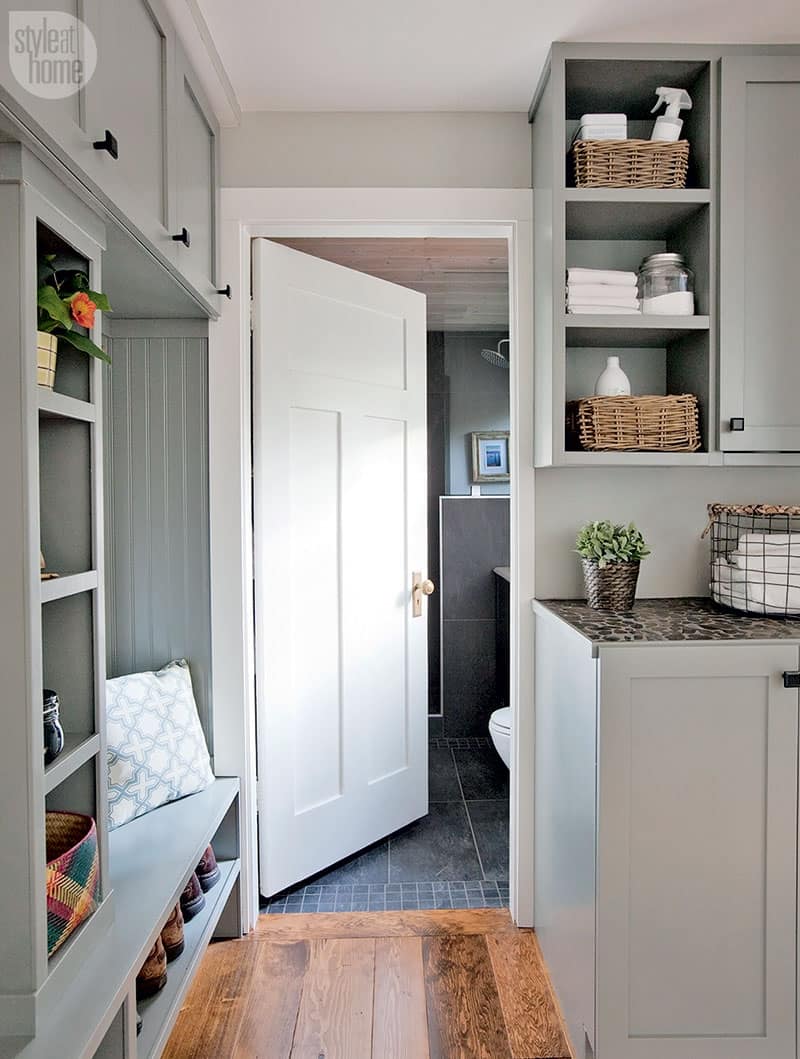 The mud room/ laundry room boasts a washer and dryer, open and closed storage and a bench for pulling shoes on and off. It even conceals the ugly water heater that was once exposed in the bathroom (just beyond that white door). “Since the area is open to the main living space, it had to look good,” says Dan. “The result demonstrates how design can be beautiful and functional at the same time.” 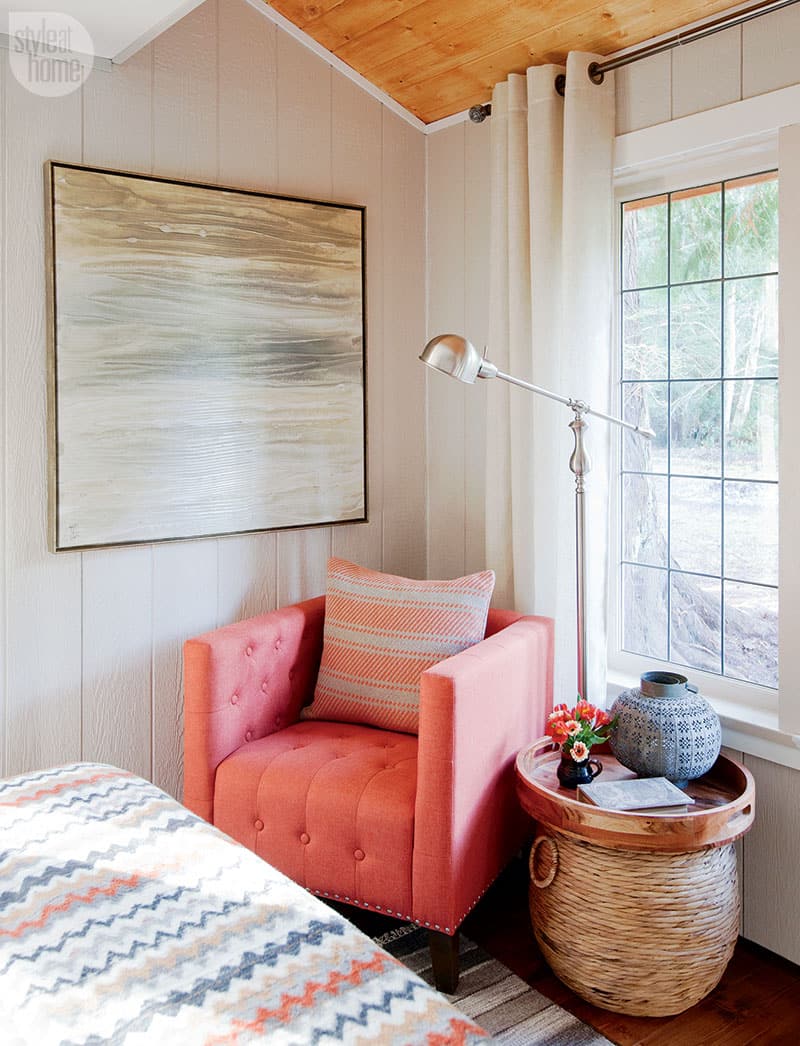 “If a client tells me they’re not afraid of colour, I’m going to give it to them,” says Dan, who incorporated bold hues, such as the rusty orange of the master bedroom’s tufted armchair, throughout the house. 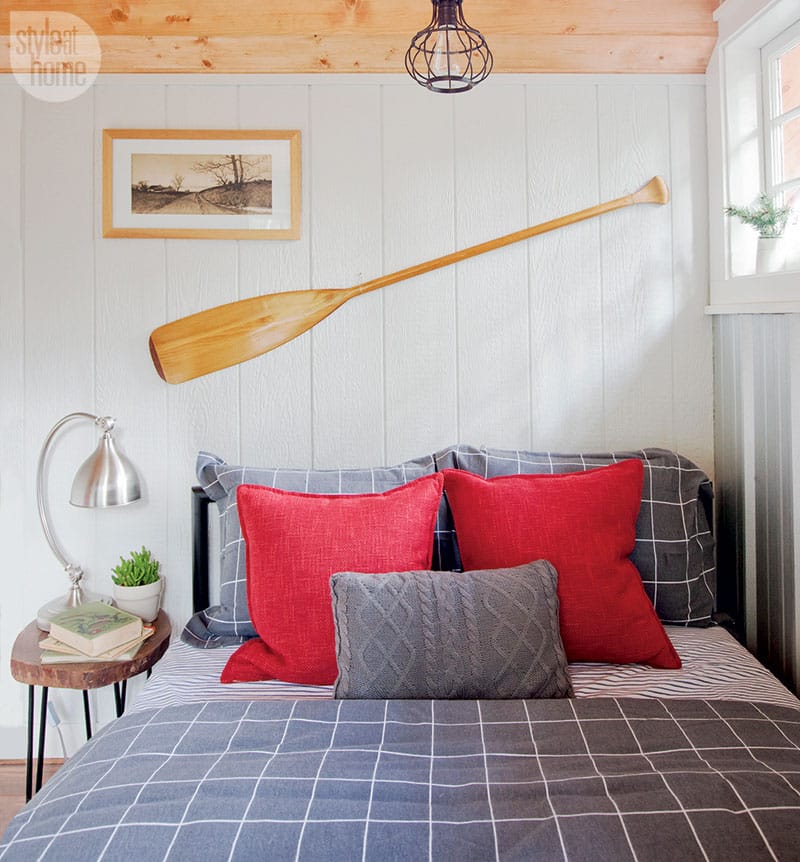 The homeowners’ teenaged son, Griffin Wolf, was so thrilled to finally get a place of his own: Until now, his bedroom was just one big unfinished space. “There was no sense of privacy,” says Dan. “Griffin’s room was open to the living area below.” An old paddle offers creative wall art that’s perfectly fitting for Hornby Island, which attracts both artsy and sporty types. 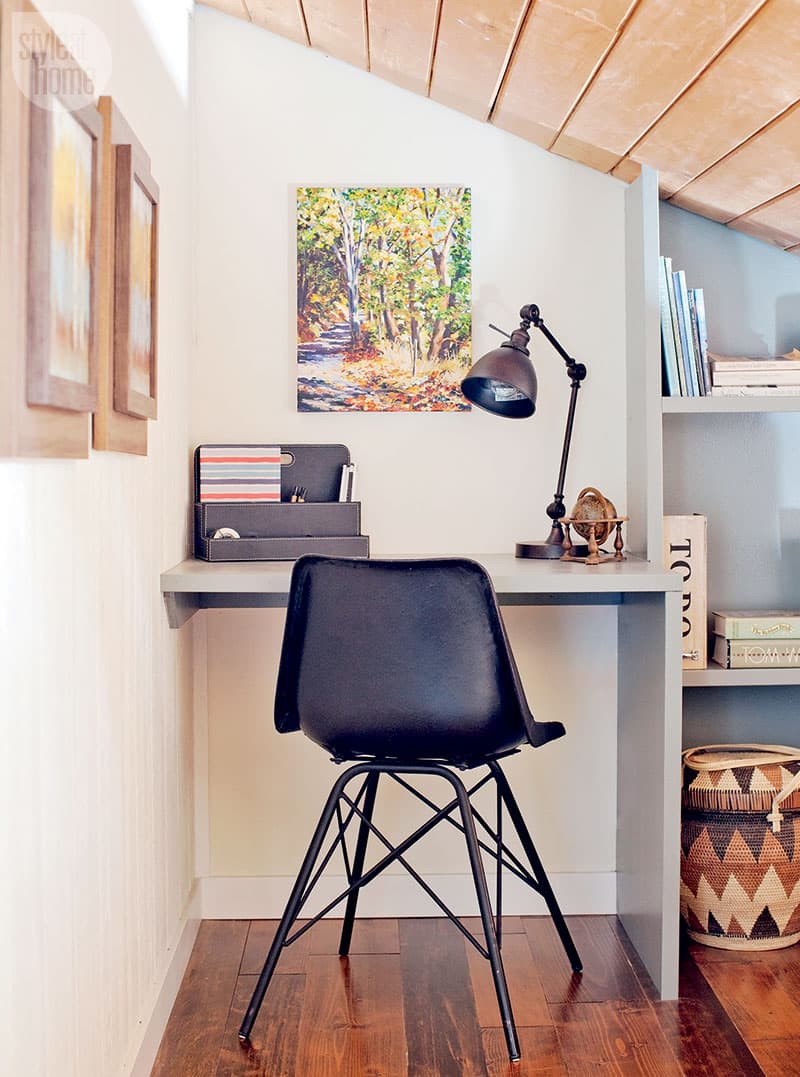 Demarcated by new walls, Griffin’s bedroom is positioned behind this little loft area, which is open to the downstairs living room. The cheerful space features a lounger (not shown) that unfolds into a small bed for guests wanting to spend the night, as well as this tiny office nook for anyone who has extra work to complete. 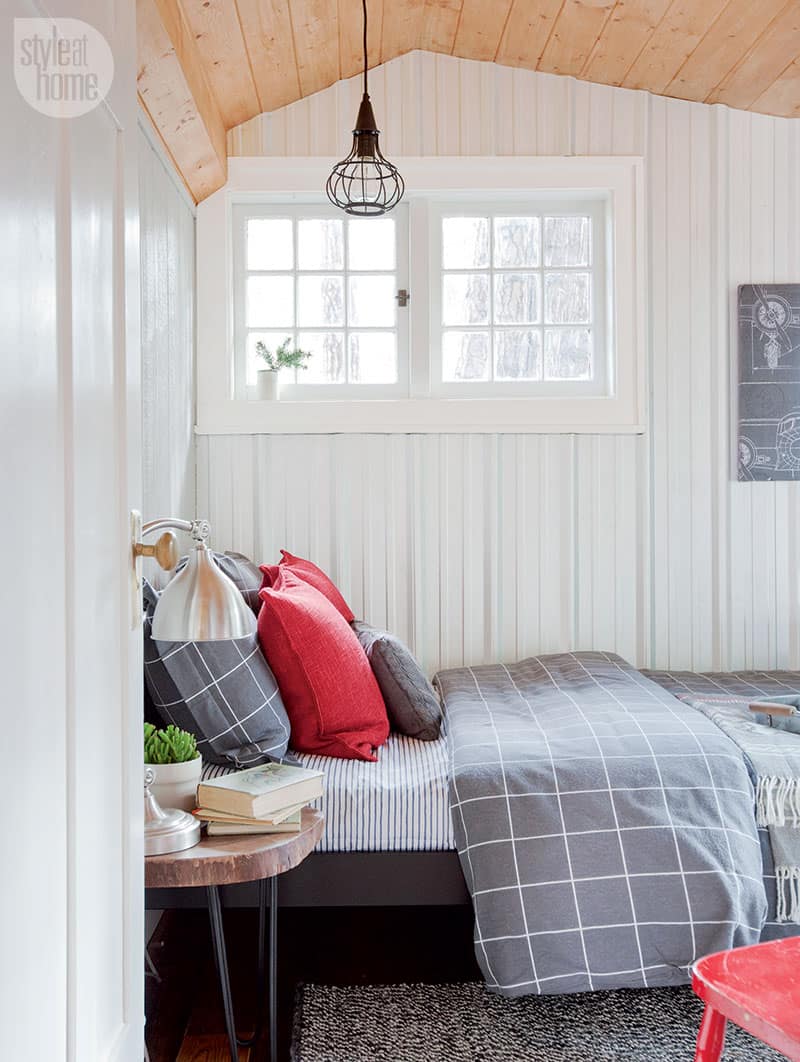 While a shiplap-look treatment lends texture to three of the walls in Griffin’s new room, corrugated metal roofing provides interest on the fourth. “Colour is obviously critical to great design,” says Dan. “But every space should take a good black and white picture as well, because when you take colour out of the equation, texture is what’s left to analyze.”