Starring a diverse cast, tension and drama, this pared-back open-concept condo is anything but prosaic.

A great designer is a matchmaker, a trendsetter and, above all else, a storyteller. With the decor of this new-build condo’s main living area, Yanic Simard, founder and lead designer of Toronto Interior Design Group, proves he is among the greats. The scene in this 540-square-foot open-concept space was already set. Floor-to-ceiling windows spanning two entire sides of the condo flood it with sunshine and overlook the tree-lined streets of Toronto’s posh Yorkville neighbourhood and the city’s downtown skyline beyond. With such a lively setting, a restrained decorating approach was best, so neutral finishes were chosen in the form of sophisticated greyish-white wall paint, warm-toned wide-plank hardwood floors and cream-coloured kitchen cabinetry.

With a relatively blank slate established, the cooking/dining/living space was ready for some personality, so Yanic set about casting his characters, starting with the hero: “That custom blue sectional is the piece,” he says, adding that he had fabric samples sent from as far away as Europe and South America to find that “delicious” velvet. To fill the supporting roles, he animated the room with a small yet eclectic group, including a retro brass and glass coffee table, an Art Deco-inspired mirror, Mid-Century Modern-style dining furniture and traditional-meets-modern clear plastic kitchen stools. The vastly varied furnishings lend the space quiet tension, but it’s their shared low-slung silhouettes that create drama. “We wanted to make the ceiling – already impressive at 10 feet – appear even higher,” says Yanic, citing European apartments as inspiration. Dramatic, too, are the light fixtures. In the kitchen, a futuristic long-armed Serge Mouille-influenced piece is the antithesis of the classic Shaker-style cabinetry, but the fixture’s white finish humbles it. Meanwhile, the matching pendants over the living and dining areas hark back to the opulence of the Hollywood Regency period, but their size is modest and their shape simple. After all, much like the best narratives, the chicest rooms show off a skillful interplay of striking and soothing moments, so it’s no wonder this fanciful yet pared-back space earned a five-star review from the homeowners. 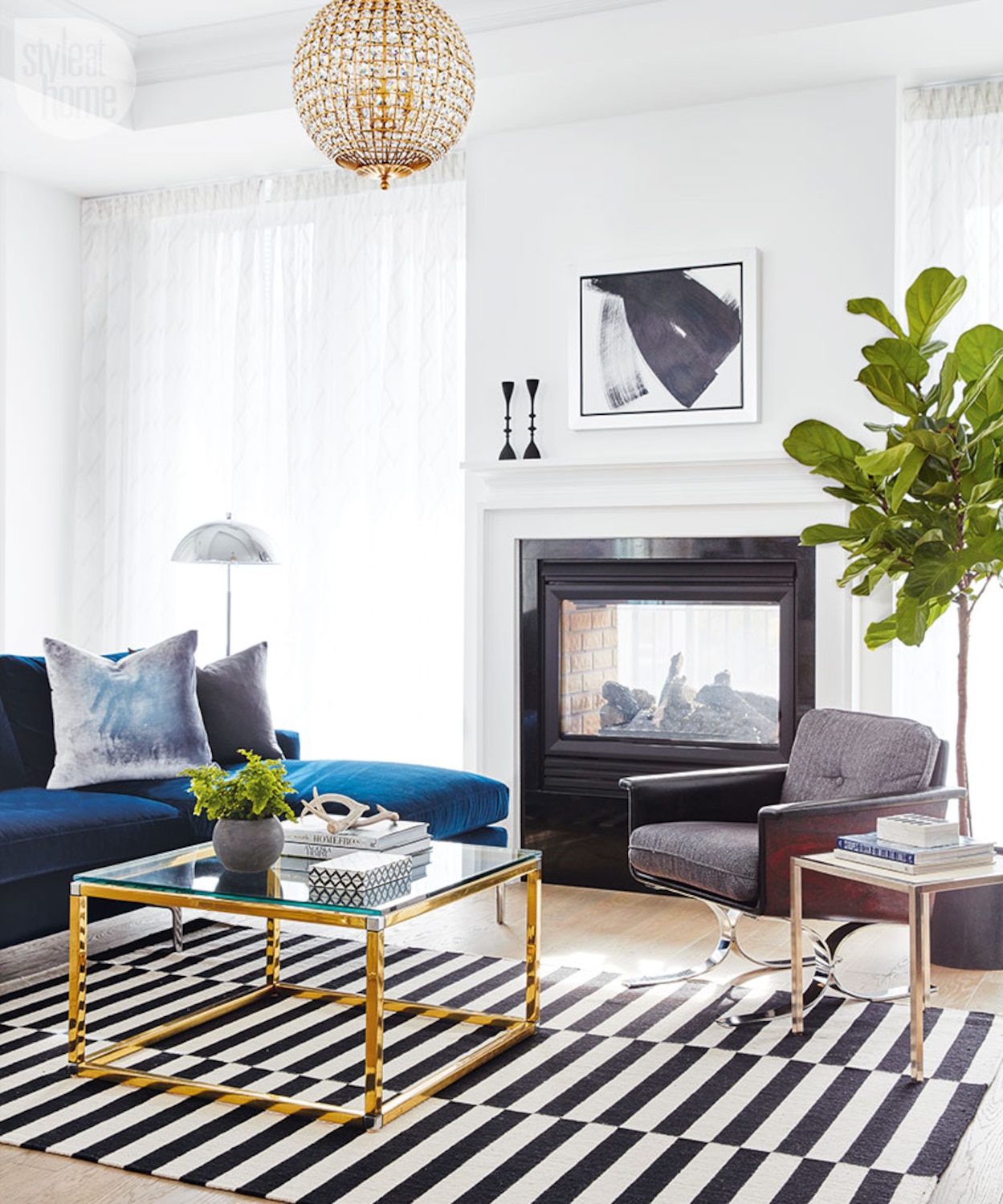 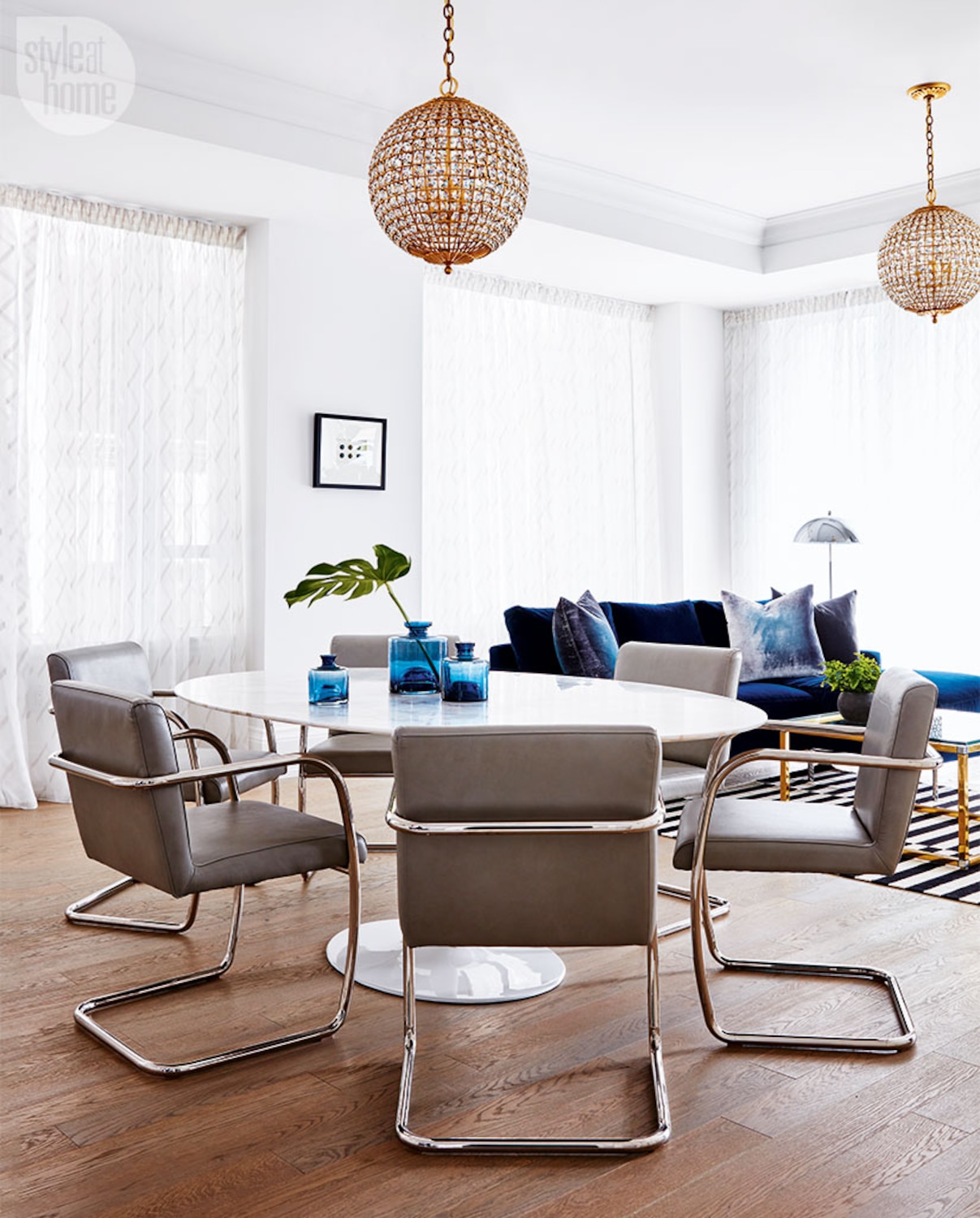 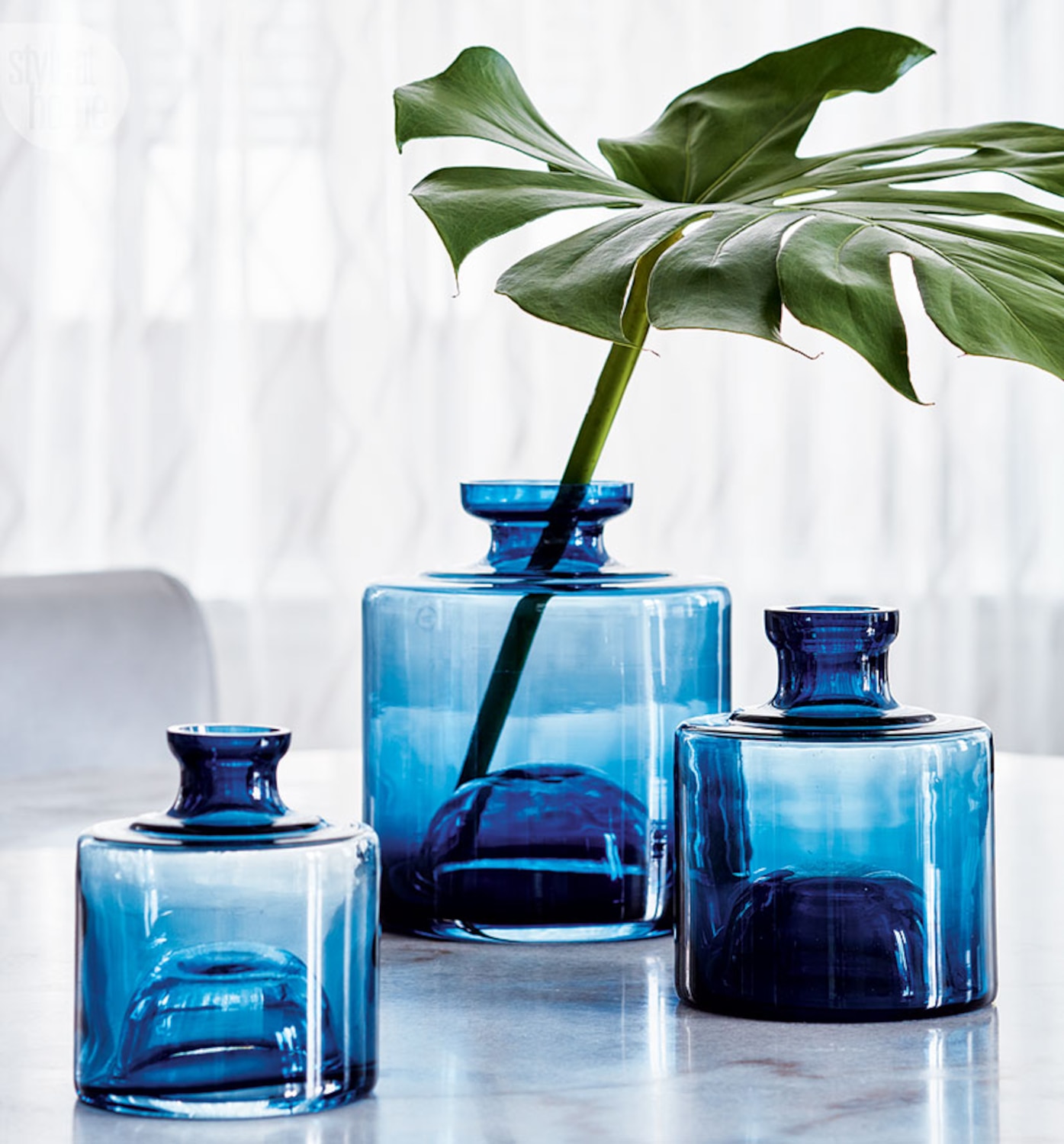 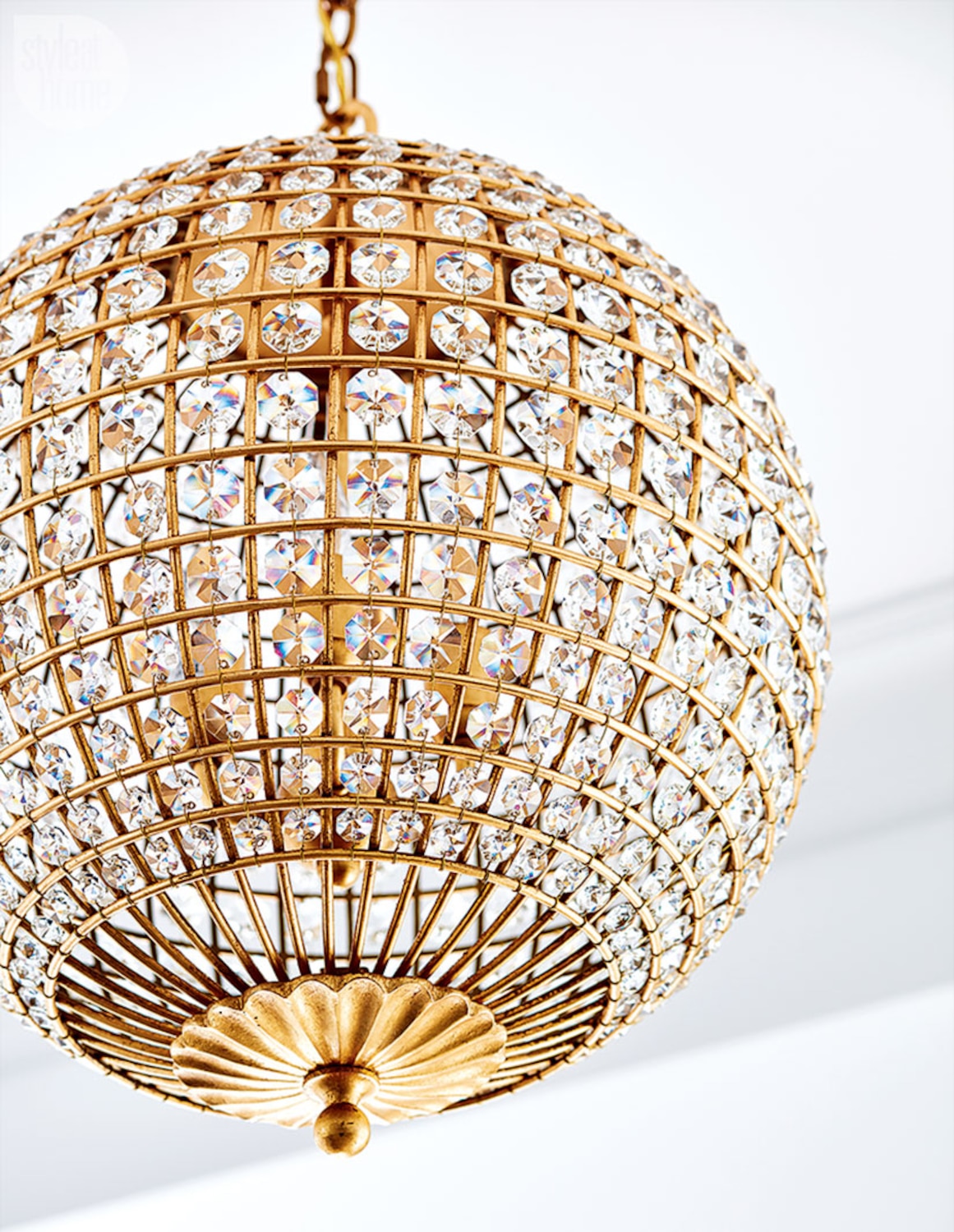 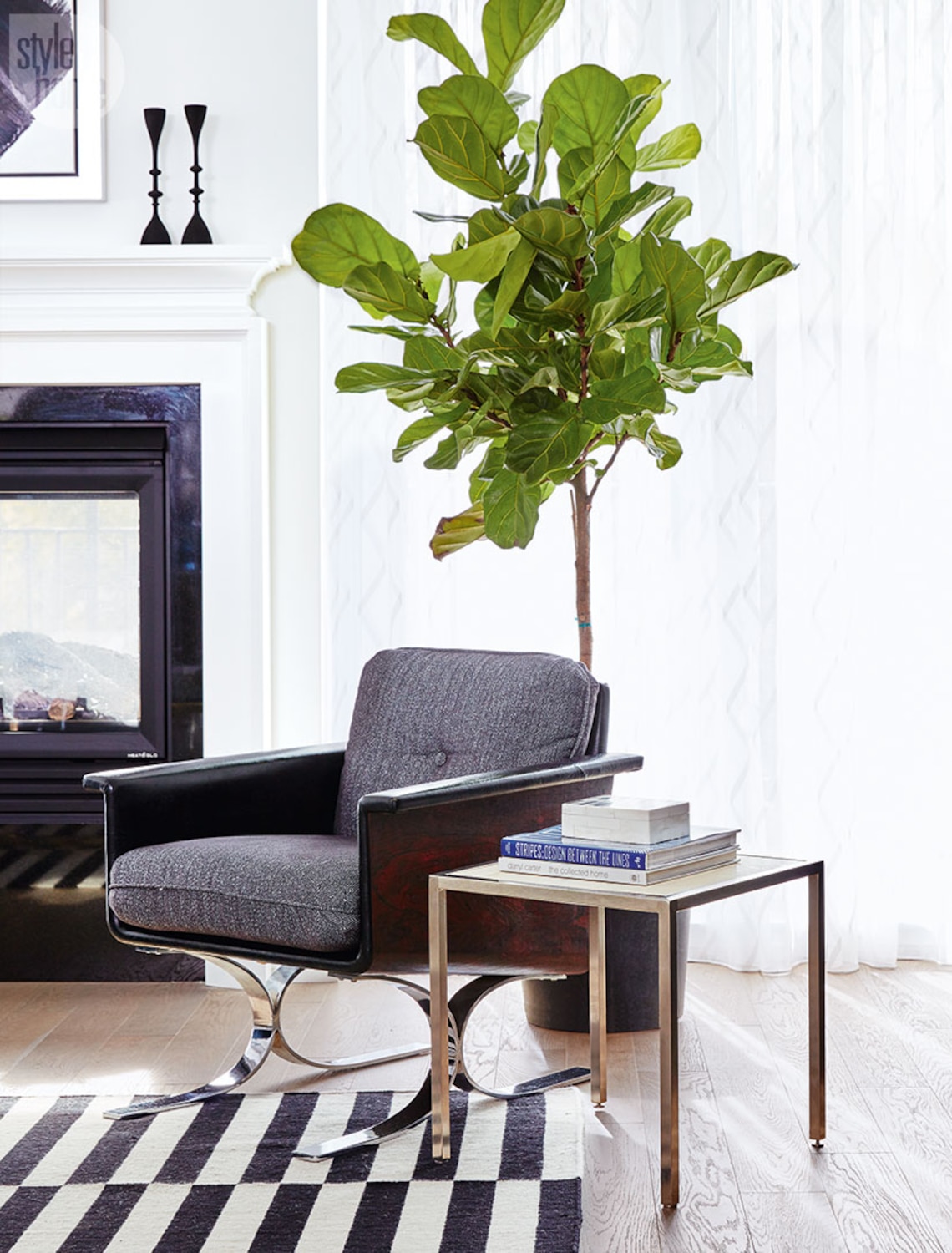 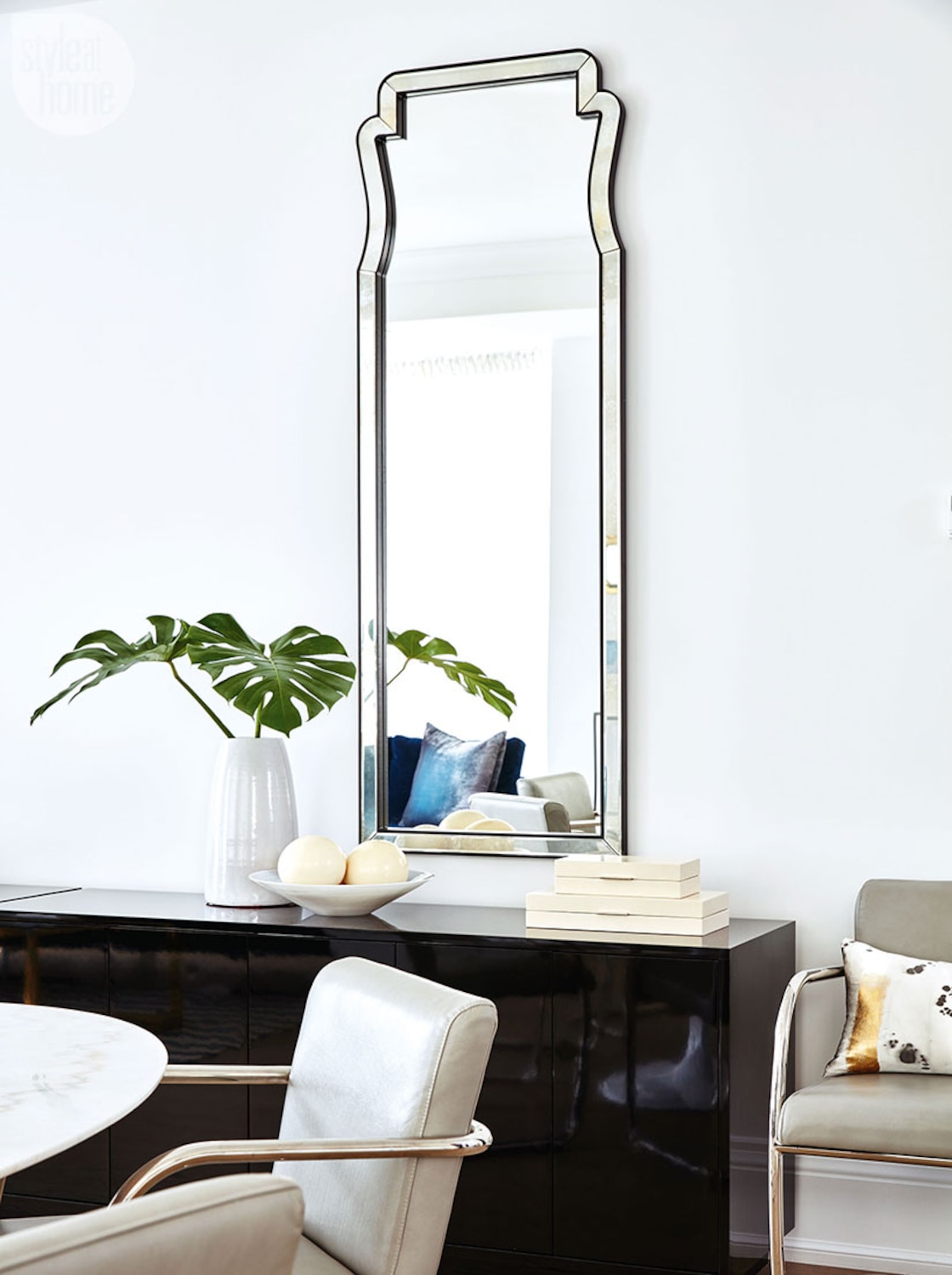 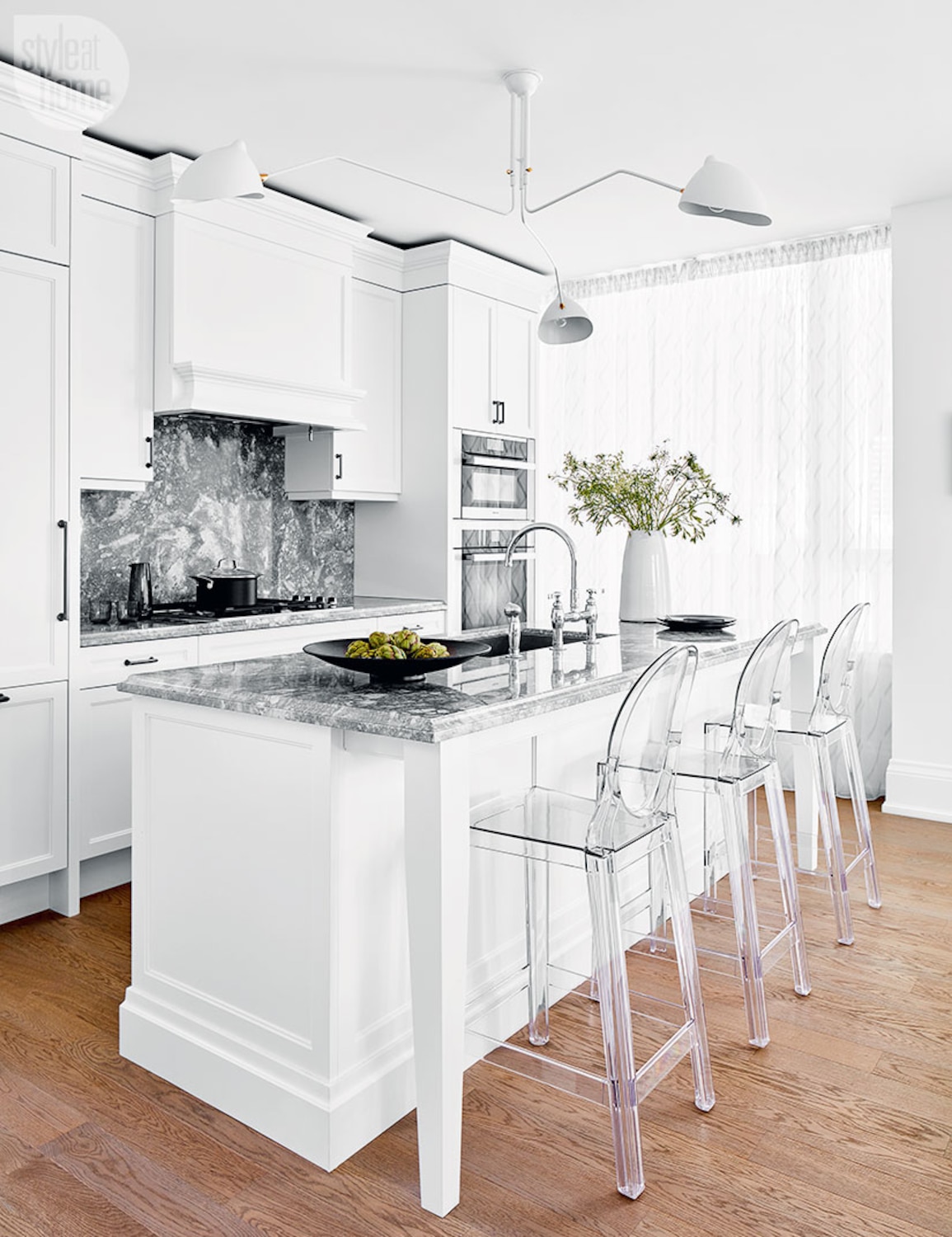 The living area plays host to all walks of (decor) life, amounting to a timeless look. though disparate, all the pieces abide by one rule: Nothing distracts from the million-dollar view of downtown Toronto.

“Don’t fight what the space is offering you,” says designer Yanic Simard, who selected floating furniture arrangements for the living and dining areas in order to respect the walls of windows behind them.

Yanic punctuated the space with a small selection of thoughtful accessories, such as the blue glassware, which reinforces the colour theme introduced by the sectional.

Like a pair of old hollywood starlets, the brass-framed crystal chandeliers in the dining and living areas are all sparkle, glitz and glam, yet these dames’ diminutive proportions and simple geometric shape keep them from stealing the show.

Visible behind the vintage wood-panelled herringbone-upholstered armchair, sheer drapery, used throughout the space, almost blends into the walls. the white fabric’s grey wavy pattern is interesting up close but unassuming from afar.

The Art Deco-style mirror takes advantage of the 10-foot-high ceiling. Beneath it, the super-long glossy black sideboard connects the dining area to the living zone and houses everything from napkins to DVDs.

The bold veined grey marble countertops and backsplash energize the traditional cream-toned kitchen cabinetry. The classic finishes get a dose of modernity from the contemporary light fixture and clear plastic stools.