Bringing Parisian charm to a petite Montreal abode, the new girl in town makes a name for herself in the creative community.

Nowadays, the most important factor to consider when choosing a home might not be the space’s size, condition or location, but how Instagrammable it is. Just ask Lauren MacLean, whose Parisian-style gem on the outskirts of Old Montreal has attracted quite a social media following.

“Showing you my space one small square at a time,” reads Lauren’s Instagram profile, @livingbylo, a gallery of modern French decor inspiration. She works in IT but has a passion for design and began posting pictures of her quarters two years ago upon moving from Aurora, Ont., into the charming bijou apartment. Her page quickly grew a healthy following of decor and design enthusiasts who can’t resist double-tapping.

The open-concept studio is a dream for anyone with a weakness for Parisian architectural adornments, and it has enough character that its modest 500 square feet, wee kitchen and lack of closets aren’t a problem. “It’s tiny, but I always favour the style and feel of a place over the square footage.”

It’s the high ceilings, grand windows, hardwood floors and stunning wall panelling that Lauren fell in love with. “I feel very lucky to have found the place; it’s the perfect envelope for my style,” she says. And since she embraced these old features, the space didn’t require much work. In fact, it was freshly painted, so all that was left for Lauren to do was change some hardware, conceptualize a layout and furnish the entire studio from scratch.

Lauren’s main goals were to complement the architecture by employing a pared-back scheme, letting just a few key pieces shine. “I wouldn’t want to take away from the beautiful character of the space,” she explains. She settled on a mixture of styles, pairing Mid-Century Modern furniture with the French-inspired bones, and was sure to add in plenty of greenery, feminine touches and look-at-me extras. “Keeping the foundation minimal is key to making an elegant eclectic style work,” she says.

Case in point: Clean-lined elements like the mid-century-style sofa, media console, armchair and side tables are elevated by textiles and accessories in airy pastel colours, which work well with the natural light welcomed in by the floor-to-ceiling windows. Hits of strong hues in select furnishings and accessories play into the eclectic look without taking the spotlight from the architecture.

The pieces of art, however, are total scene-stealers. The large portrait of a girl acts as the focal point, tying together the home’s palette and demanding attention as you enter the apartment. “In a small space, you think you have to play it safe and downscale everything,” says Lauren, “but the drama of having such a big piece among its petite surroundings is such a cool juxtaposition.”

The artists behind the paintings, as well as other creative types Lauren met while decorating her home, have since become her friends — the space has offered her a social network that surpassed handheld screens and moved into face-to-face relationships. Lauren now collaborates with members of Montreal’s artistic community, who hold photo shoots in her place and take advantage of her eye for interior design.

Who knew living in a gorgeous abode could expand your social network? It’s something to consider when you’re looking for new quarters. 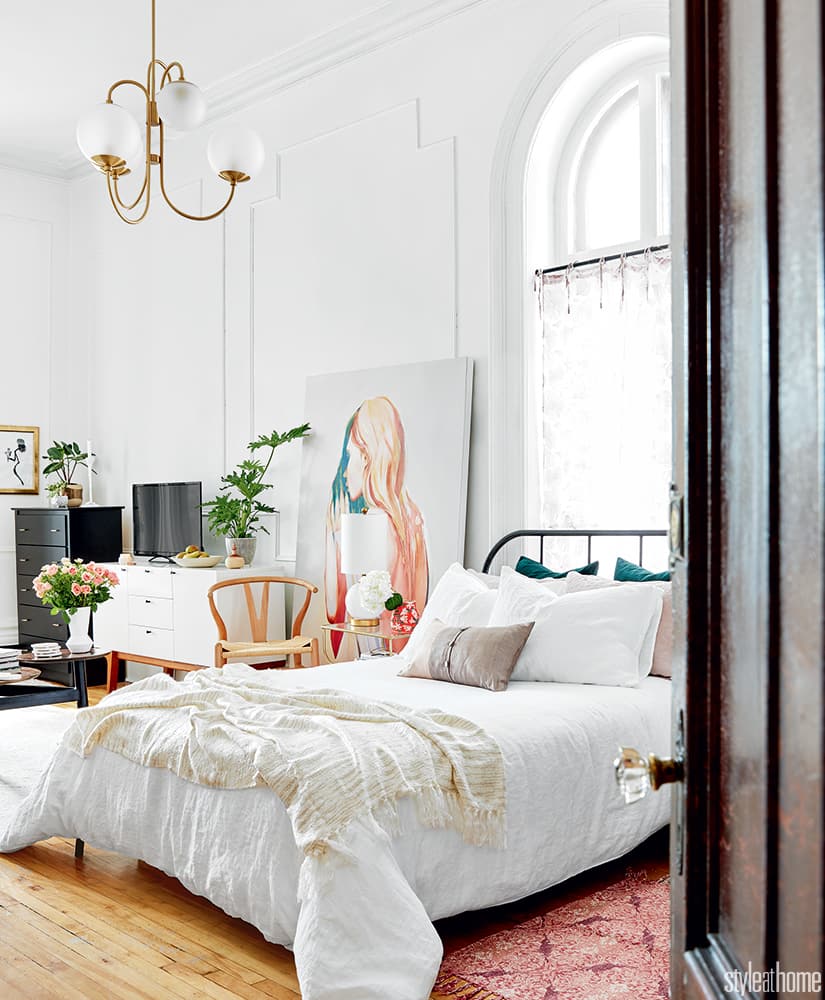 Having only one small rectangular studio space to work with, homeowner Lauren MacLean had to mastermind a strategic floor plan that made the most of every square foot. First, she positioned the bed front and centre near the entrance, in between the kitchen and the rest of the living space – not the placement you might expect, but she had a good reason: “The window serves as the perfect backdrop,” she says. 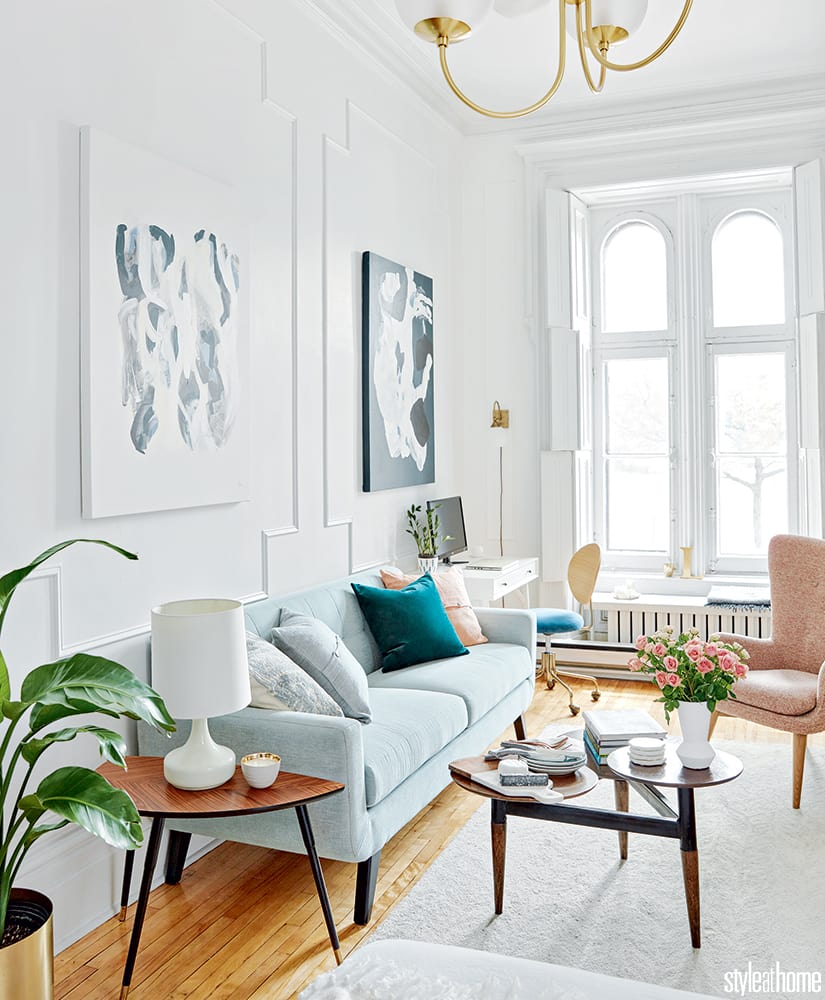 Lauren refreshes her home every few months by switching out inexpensive toss cushions, throws and bedding. “That’s where a lot of the space’s colour comes from,” she says, “so I’m not going to get tired of whatever hues I’m into that season.” 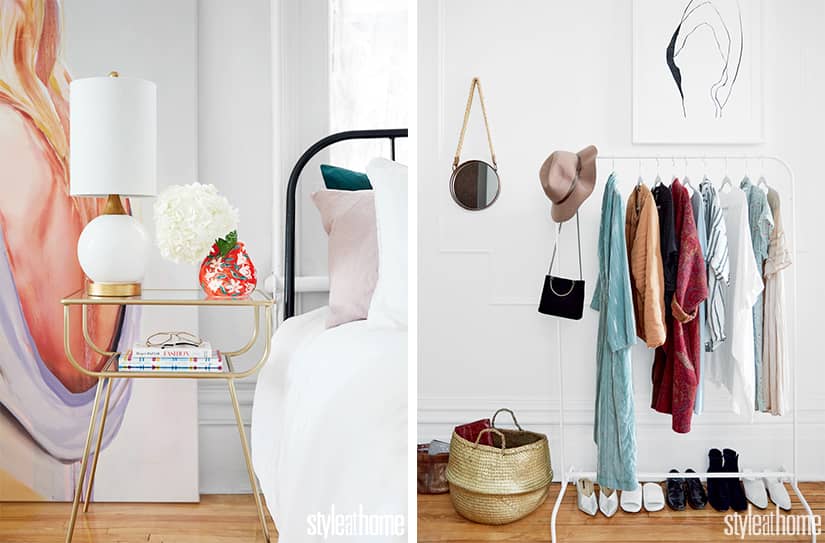 Sure, not having a single closet in your small studio apartment can be problematic, but Lauren turned a design limitation into a stunning statement: She made an artistic vignette of a dressing area using a diminutive clothing rack hung with a few of her favourite items, a small mirror and an eye-catching piece of art. 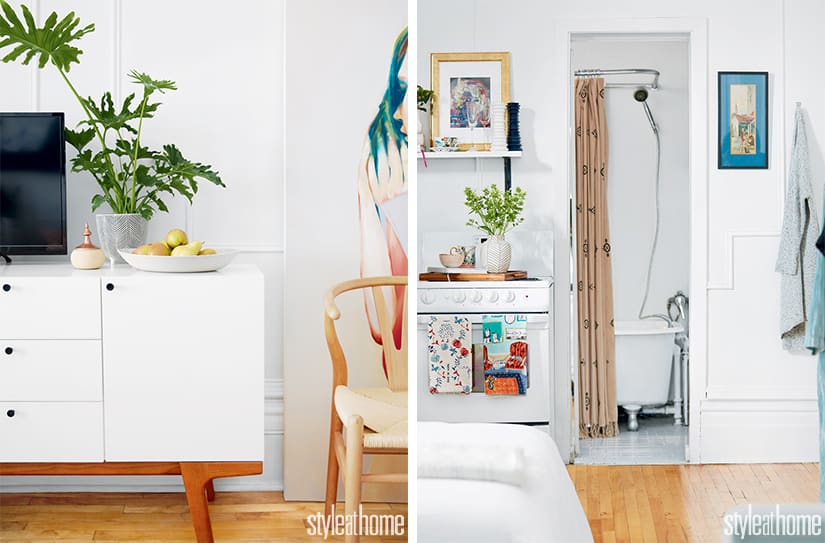 The kitchen’s style potential was limited, so Lauren added an open shelf above the stove, which she uses to inject charm with a few plants, fancy dishware and decorative objets. 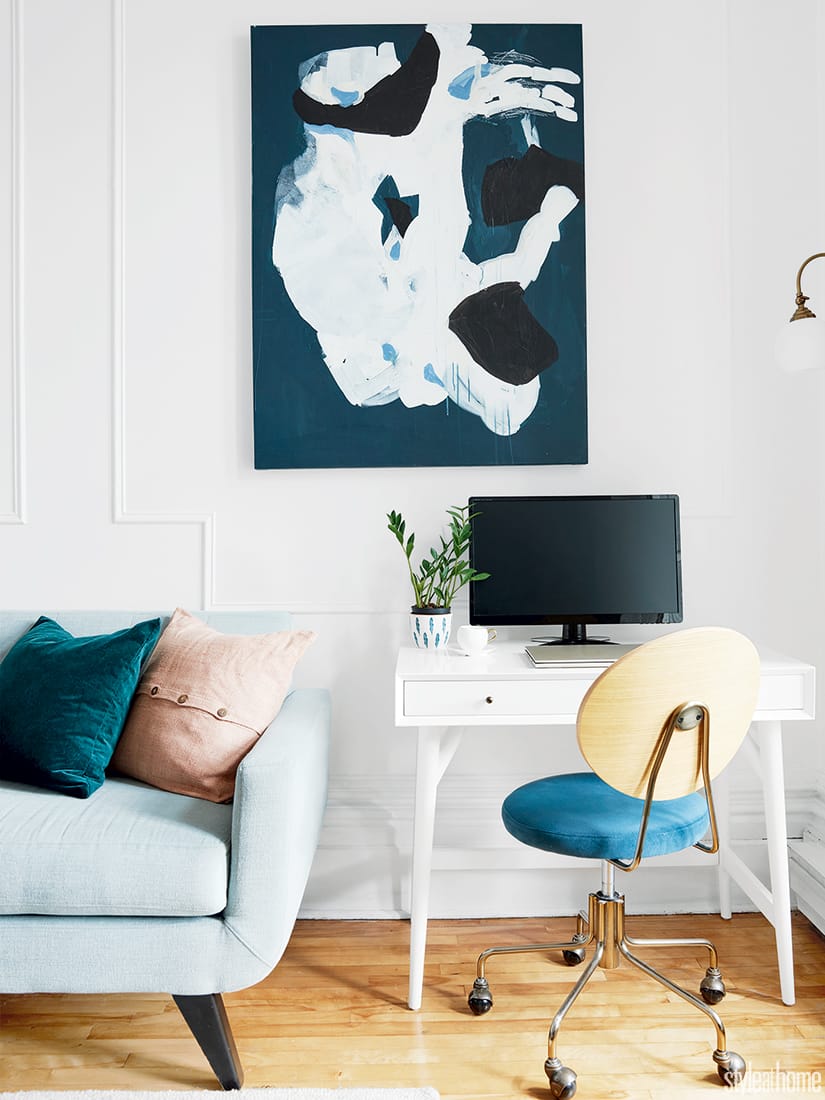 Lauren works from home, so she carved out an office corner that gets a lot of light.