Brimming with luxurious materials and industrial swagger, an edgy-meets-elegant makeover sees the union of two lofts.

In sitcoms, there’s always the jokester perpetually getting locked out of his apartment in the hallway wearing socks – or worse, far less. In real life, however, hallway humour is not so funny. Take this husband and wife who had to go out to the corridor every time they needed something from next door. They own (and inhabit) adjacent lofts in Toronto’s historic Merchandise Building. Commensurate with early 20th-century Chicago-style architecture, the building has hefty bones, high ceilings and factory windows – enthralling features that meant moving elsewhere to gain more space was out of the question. “Besides, the idea was always to merge the two units,” says the husband, joking, “but in the meantime, we had the best guest suite in the city.”

After owning the lofts for three years, the professional pair, who has a four-year-old daughter and six-year-old son, finally decided to fuse the 1,763- and 1,372-square-foot spaces. To bring the project from concept to fruition, they collaborated with Croma Design’s savvy Ryan Martin and Amy Kent. Building restrictions only allowed for a small opening between the suites, which was achieved by removing the kitchen and a small laundry closet from one unit, as well as reconfiguring the master bedroom. But it worked out perfectly. “It resulted in two separate zones: one for the family to relax in, the other for entertaining,” explains Amy. Toys are relegated to the family room in one unit, while in the other, the slick living room with its stand-out hot-rolled-steel fireplace is enjoyed when the adults are entertaining. 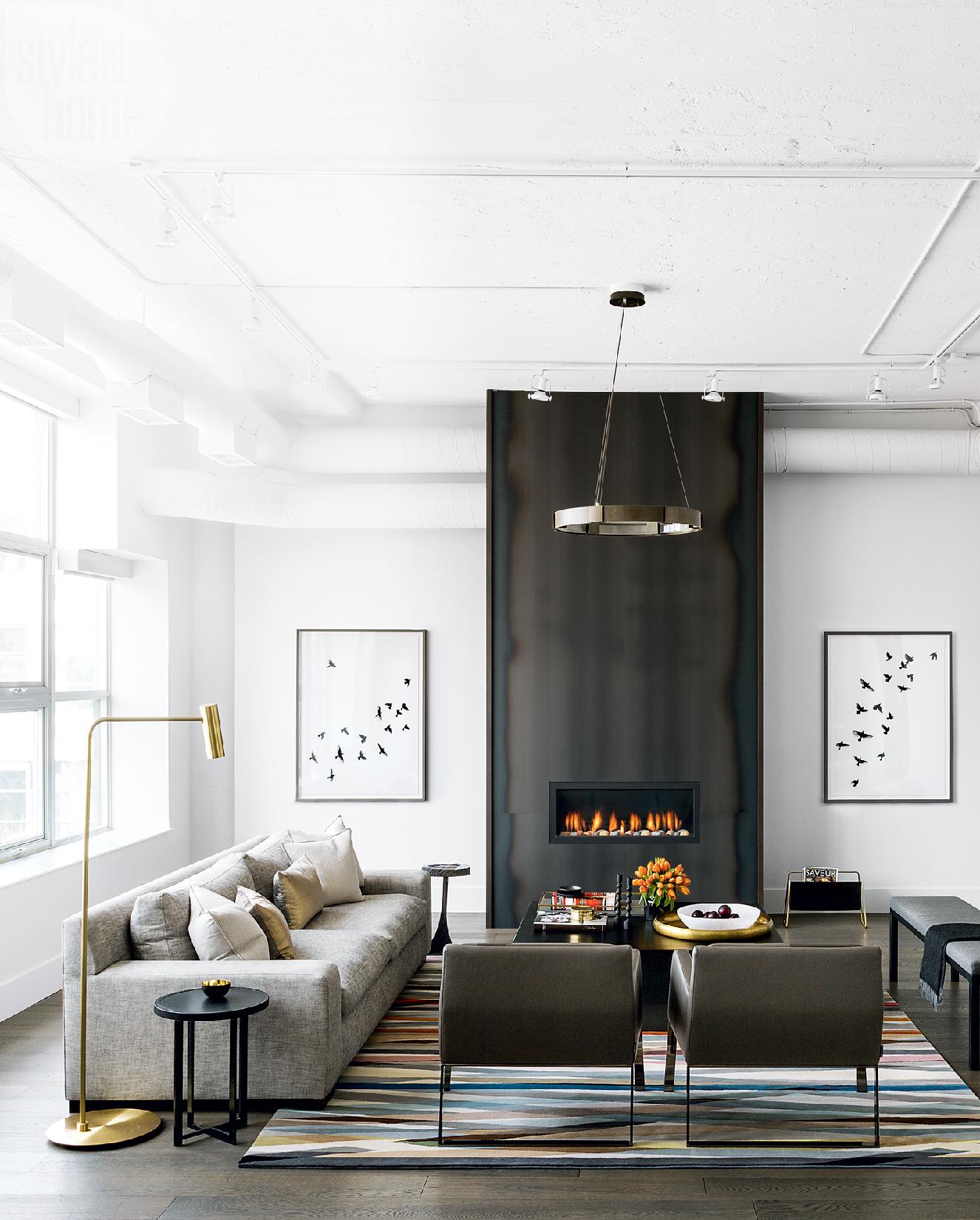 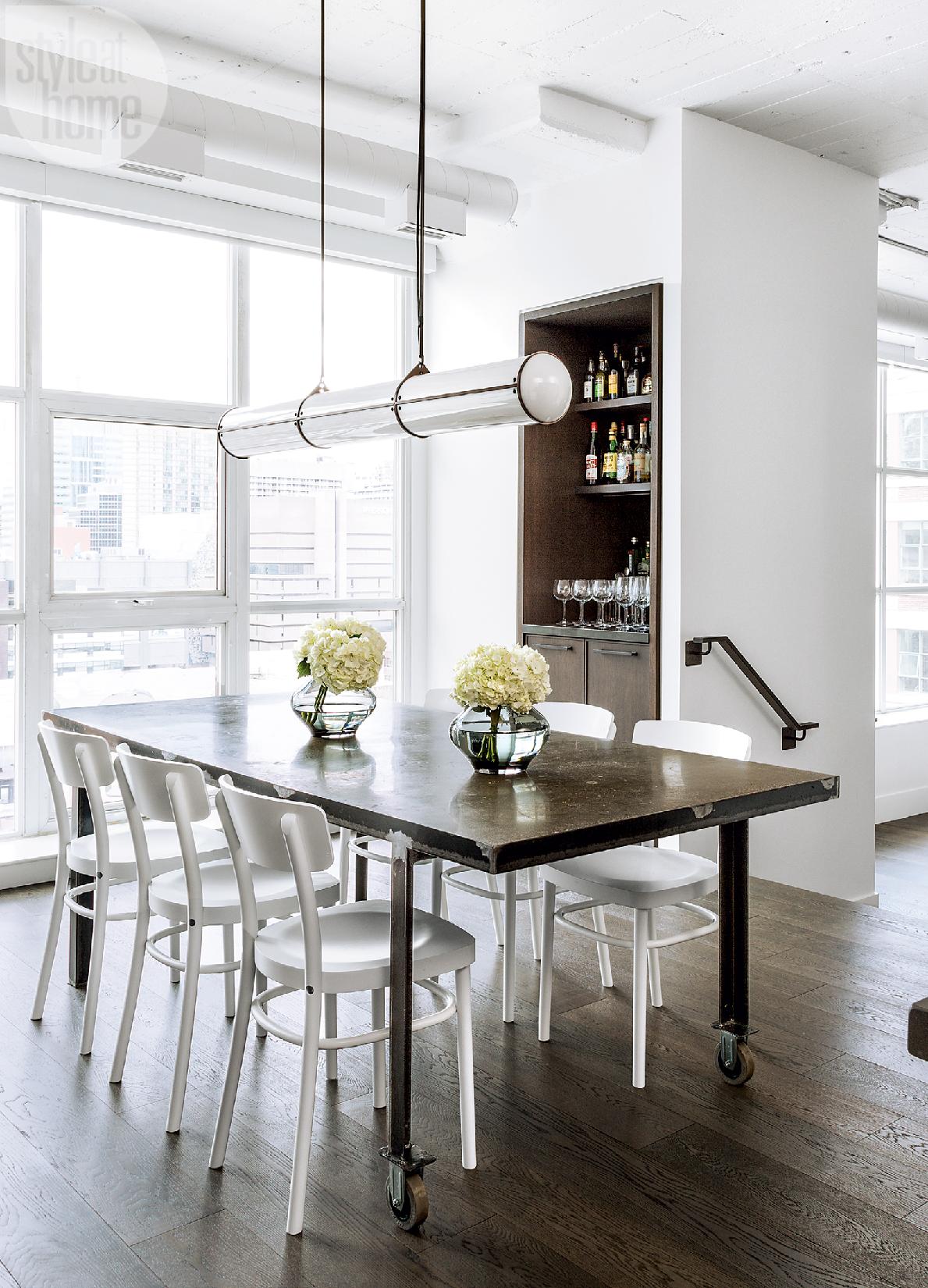 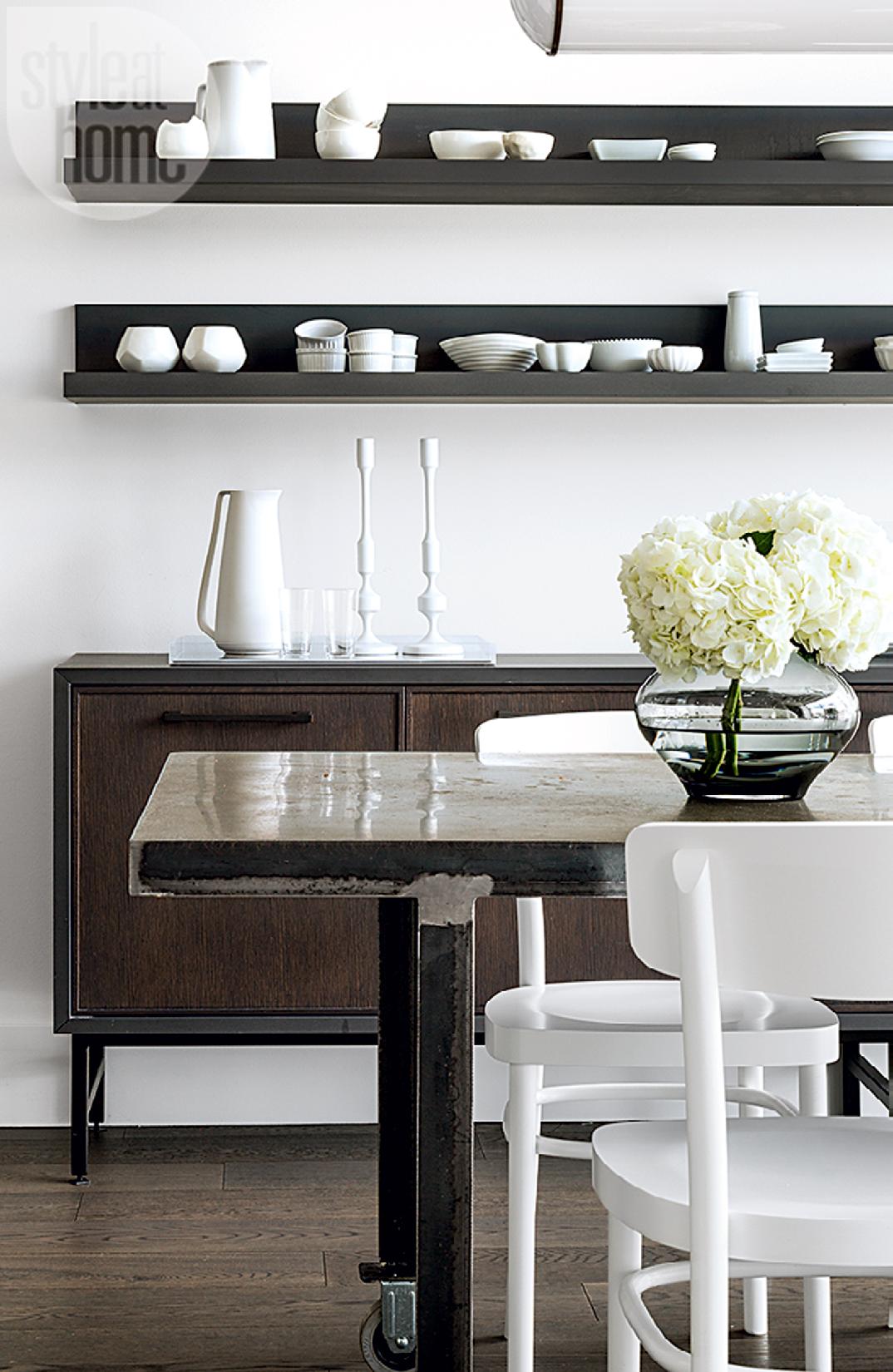 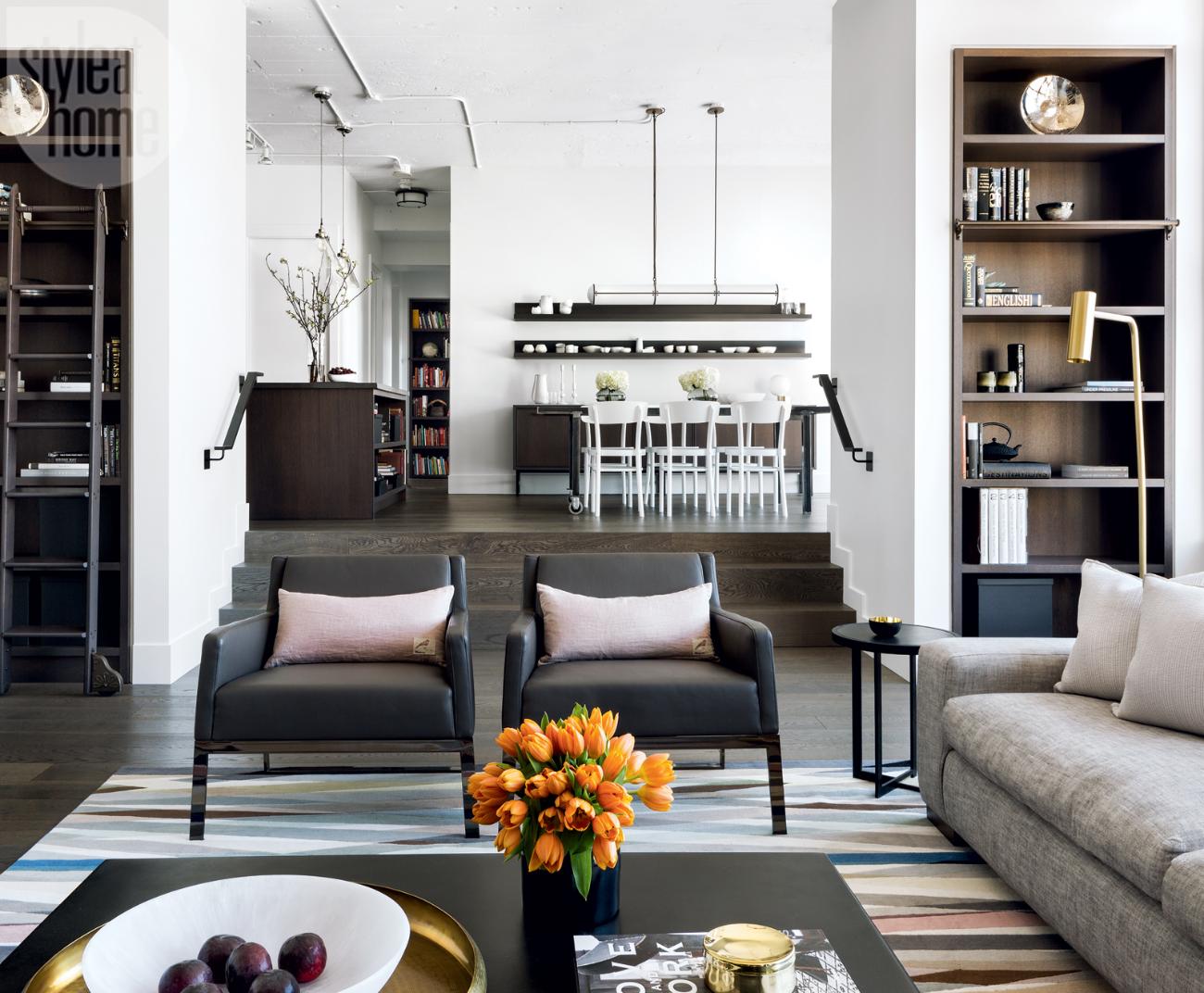 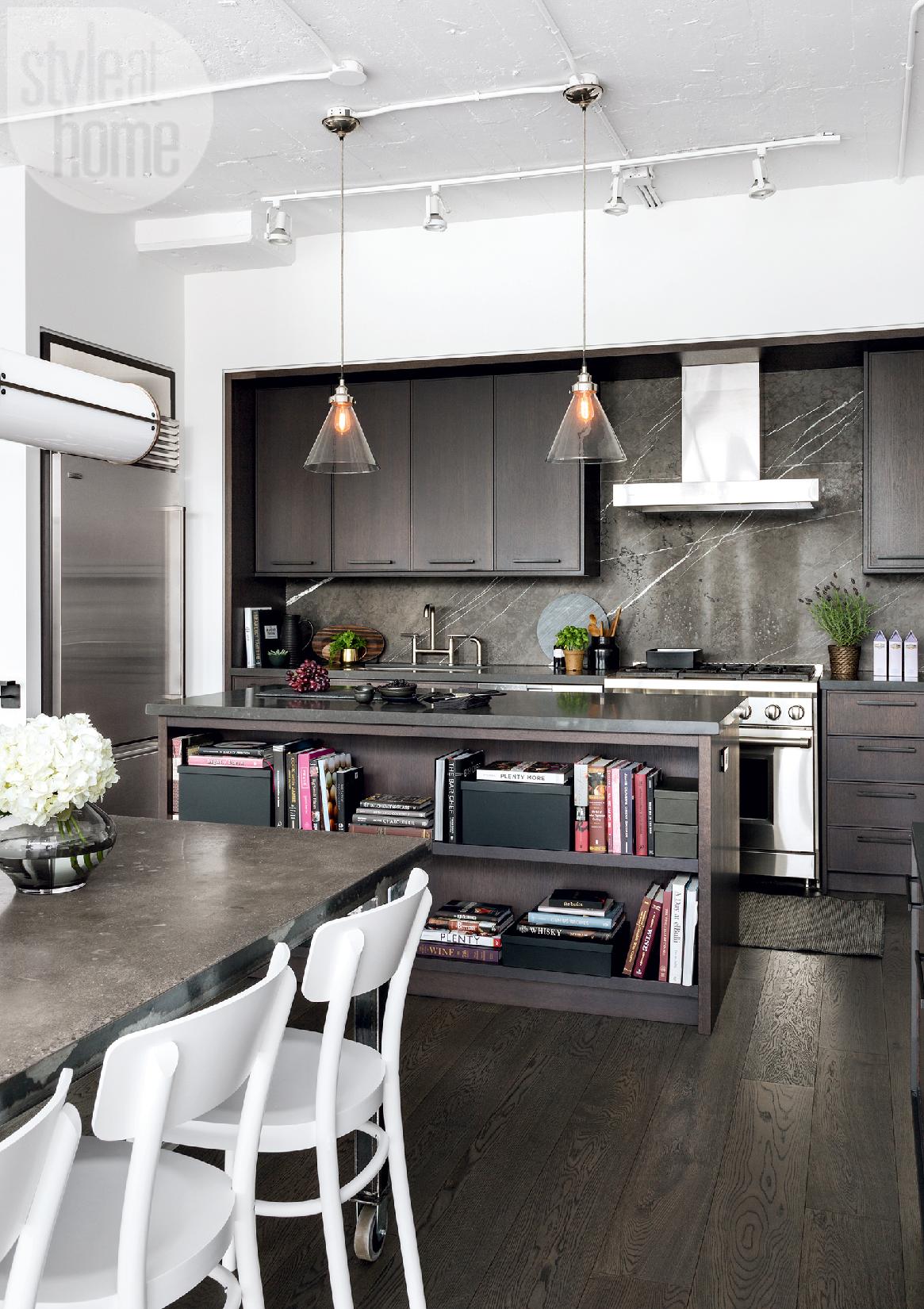 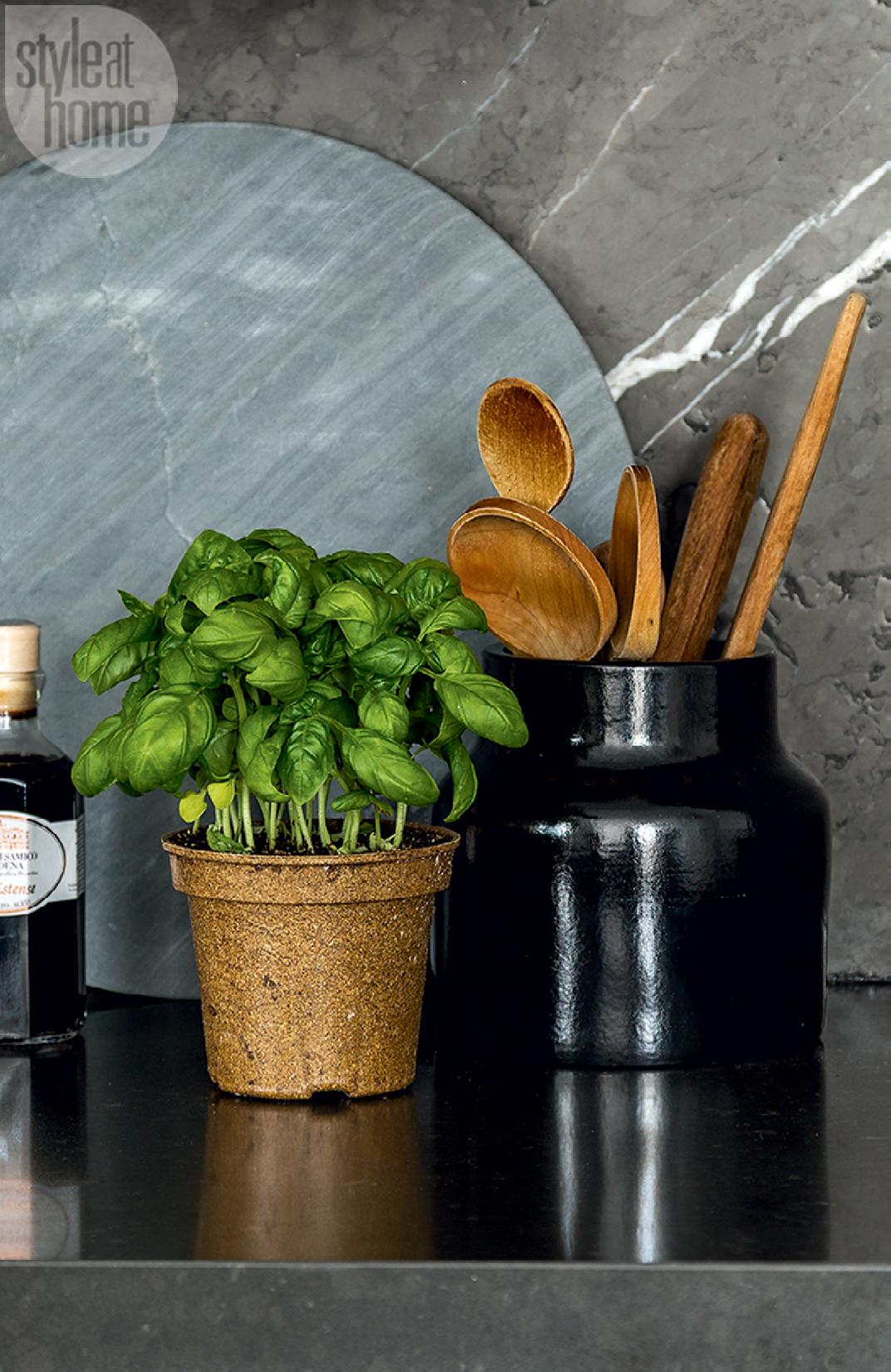 In the living room of this Toronto loft designed by Ryan Martin and Amy Kent of Croma Design, a standout fireplace surround made from 12 feet of hot-rolled steel creates architectural drama. Modern furnishings, hits of brass and pared-back artwork establish a look that’s at once livable and luxurious.

The dining room’s existing bar niche was updated with a Caesarstone-topped cabinet and upper shelves. An artistic take on utilitarian fluorescents over the dining table, the light fixture offers striking sculptural presence – but no harshness. “It uses LED bulbs, so it emits a warm glow,” says Amy.

The loft’s decor is all about sharp contrast and cohesion, exemplified in the long steel shelves that echo the steel-based dining table, as well as the doors of the nine-foot-long sideboard, which are the same as the ones used for the kitchen cabinetry.

The living room’s custom bookcases were so tall the contractor had to build them off-site and stack them here in components – but the extra effort was worth it. They’re a huge improvement from the cluttered stand-alones that once lived in the loft.

The weight of the kitchen’s darkness is balanced by the light and airy envelope around it, from the white surrounding walls and ceiling to the glass pendant lights. The island is equipped with open shelves to store cookbooks, which offer a hint of colour.

“We chose Caesarstone countertops because they’re durable and easy to maintain, which is great for this family, who is constantly trying out new recipes from their many cookbooks,” says Amy.