The eyes may be the windows to the soul, but in Jamie Alexander’s case, it’s the other way around: The windows are the eyes to his perfectionist soul. Standing in his Toronto loft sporting chunky glasses, a skinny tie and spiked hair, the designer sweeps his arm toward three industrial windows. In his hand is a remote, and when he presses it, a whizzing is heard as a trio of blinds unfurls in regal unison. “If those weren’t perfectly aligned, they would drive me crazy,” says Jamie, who lives above his fetching one-stop shop that offers modern condo-sized furniture and design services, Alexander Interiors & Design. “I had the blinds pre-set to unfold to exactly the same height.”

Jamie’s über-attention to detail is prevalent throughout the 600- square-foot loft that he shares with his husband, stylist Joshua Breau. Designed with ferocious precision and whimsy galore (hello, clocks!), the layout offers zones for sleeping, eating and entertaining, which is key in an open-concept space that could otherwise read like a dizzying jumble. For cohesion, Jamie maintained a red, black, white and grey colour palette and chose furnishings with clean lines and a Mid-Century Modern flair. The result is a happy marriage of functionality and foxiness that feels far from cramped – which is surprising considering the gargantuan bed Jamie keeps in full view. 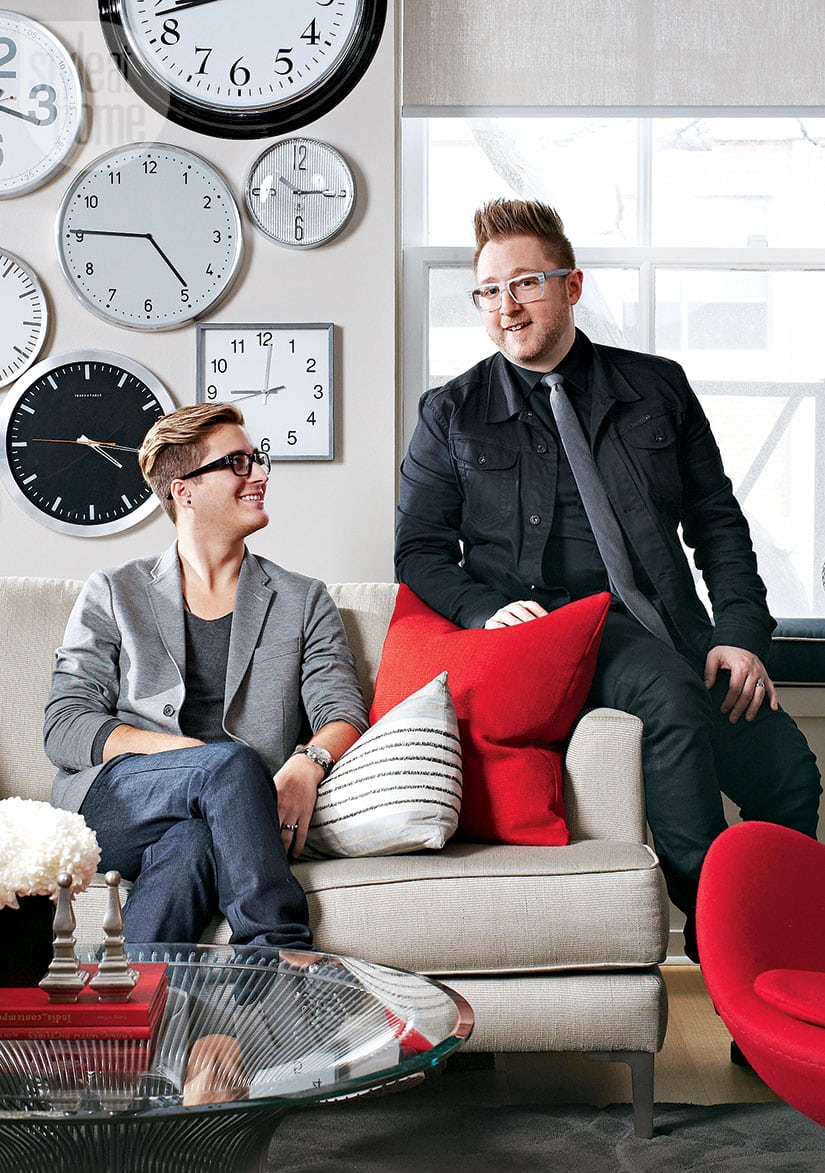 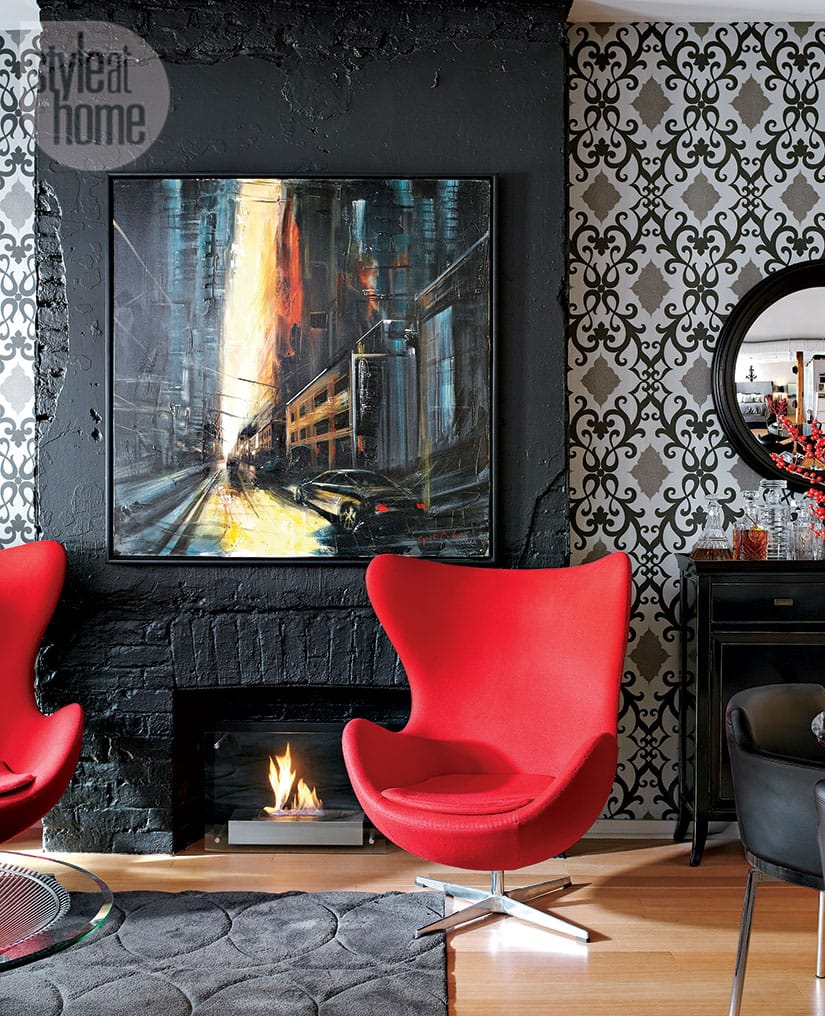 Homeowner and designer Jamie Alexander has heard his loft was once a machine shop where people built ammunition for the First and Second World Wars. Throughout the years, the fireplace has been plastered over multiple times. Jamie started to strip it back to brick but realized it was in bad shape, so he had it sealed and painted black. For a symmetrical look, Jamie flanked the fireplace with similar vignettes: convex mirrors above black cabinets that store liquor and wine. 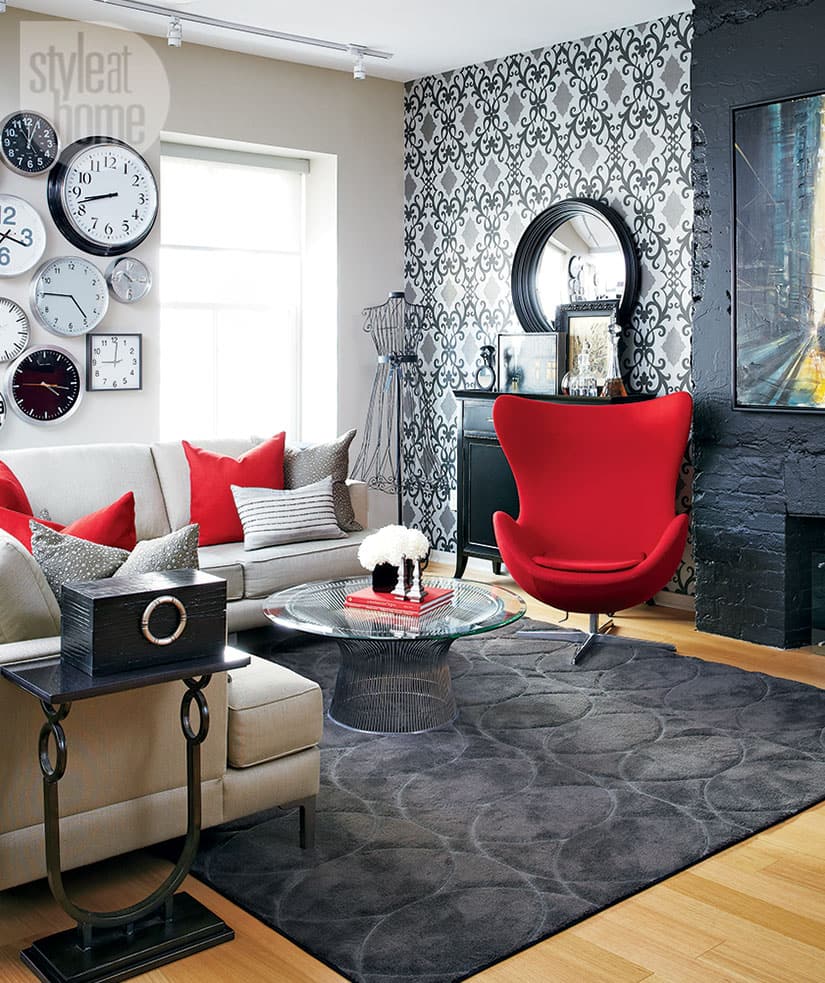 Small spaces look smashing with full-scale furniture. The Mid-Century Modern style coffee table and armchair are a luxurious foil to the industrial fireplace. 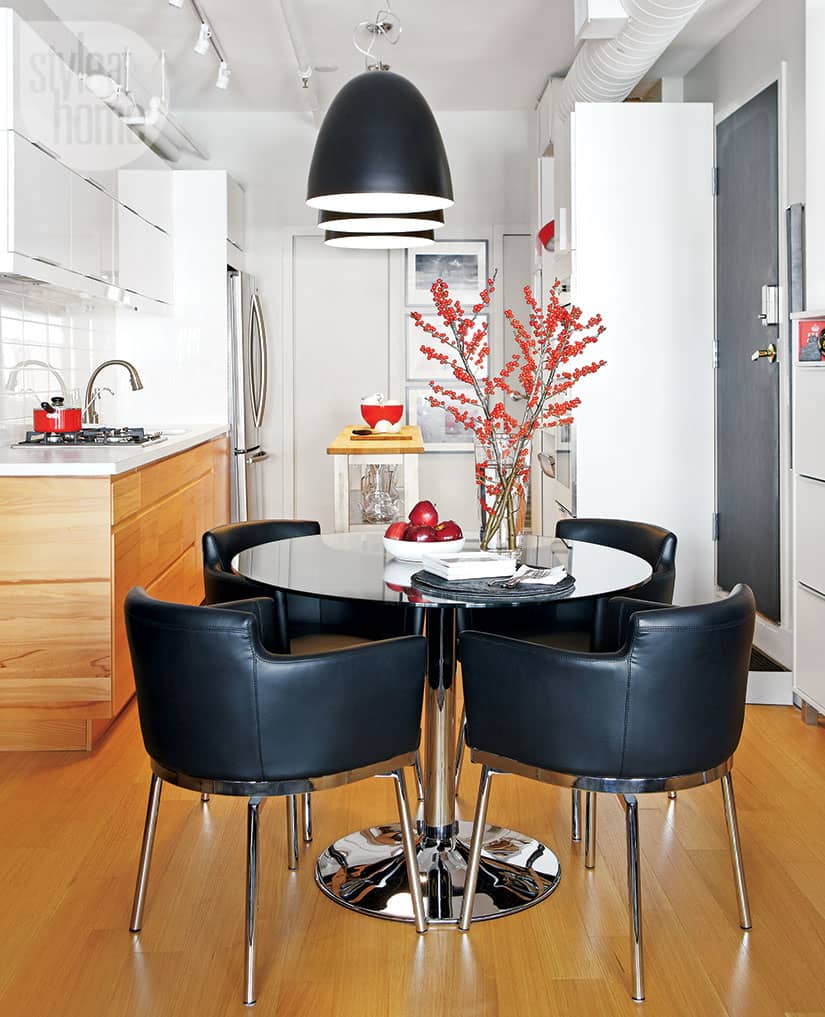 Previously walled-in and U-shaped, the kitchen was ripped out in favour of a more open, galley-style one. To maximize cupboard and counter space, he used smaller 24-inch appliances (except for the refrigerator). A slim butcher-block island provides additional chopping space. 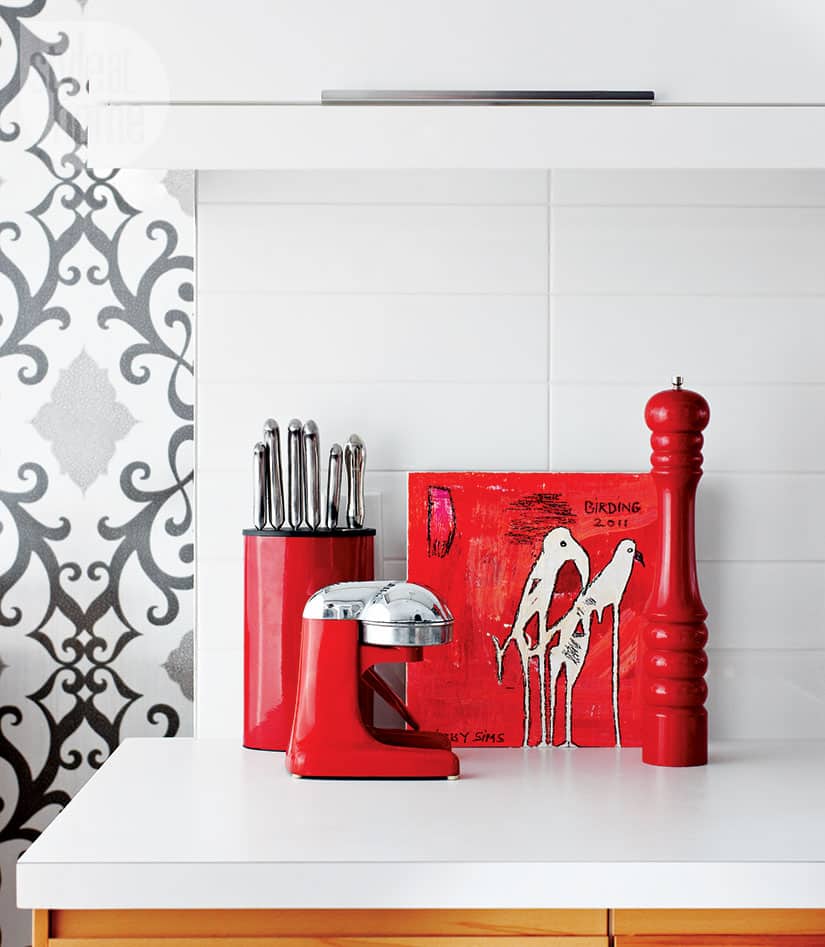 Poppy red pieces pop against a white backdrop, making this vignette full of function and fun. 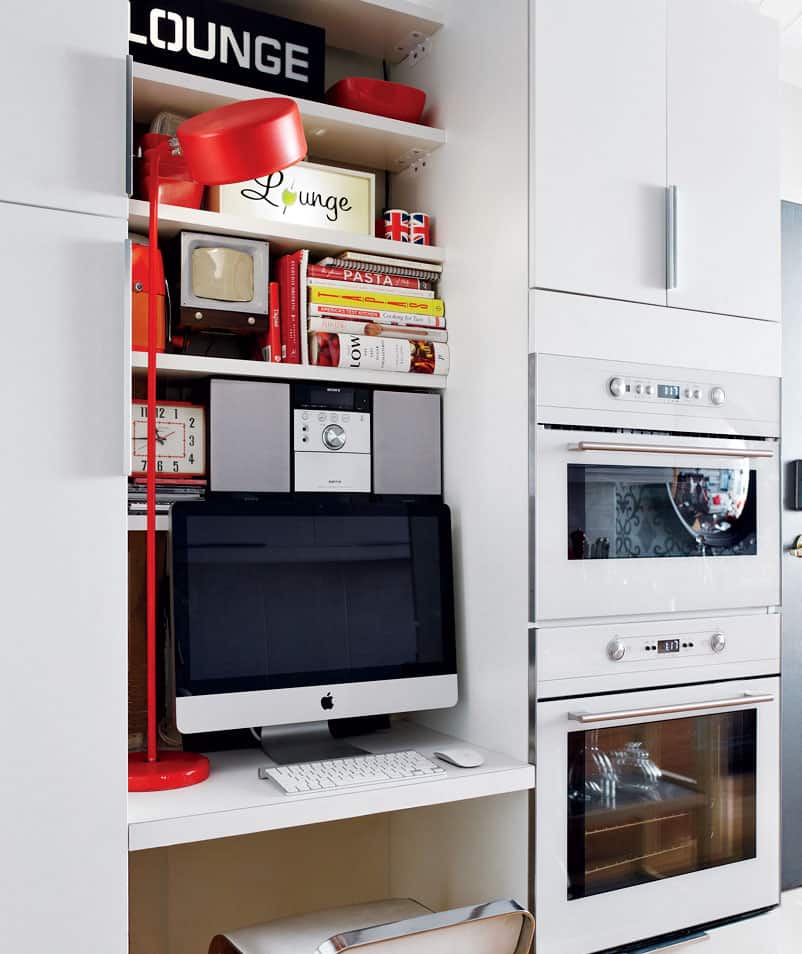 “One of us will sit here looking up a recipe while the other one cooks,” says Jamie of this nook that’s home to the couple’s cookbooks, tchotchkes and computer. 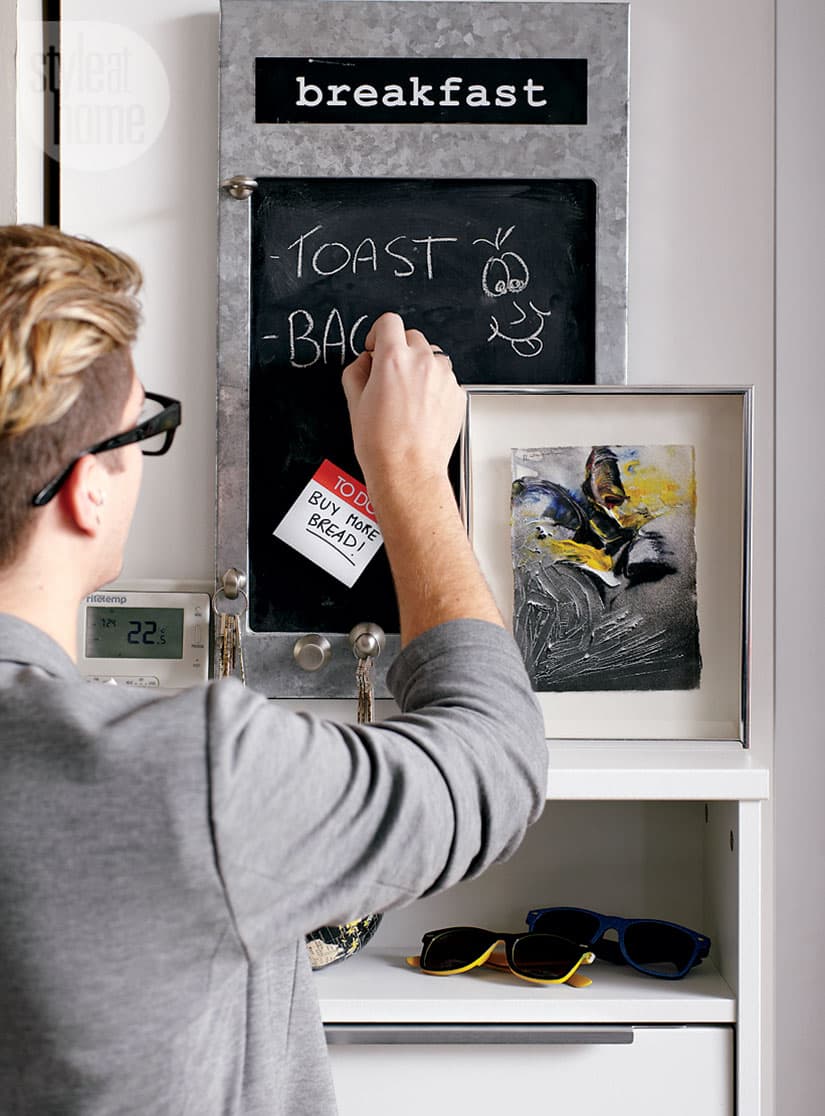 No excuses! Every entryway needs a spot to toss keys and mail. This sliver of storage even sports some fun doodads and interesting artwork. 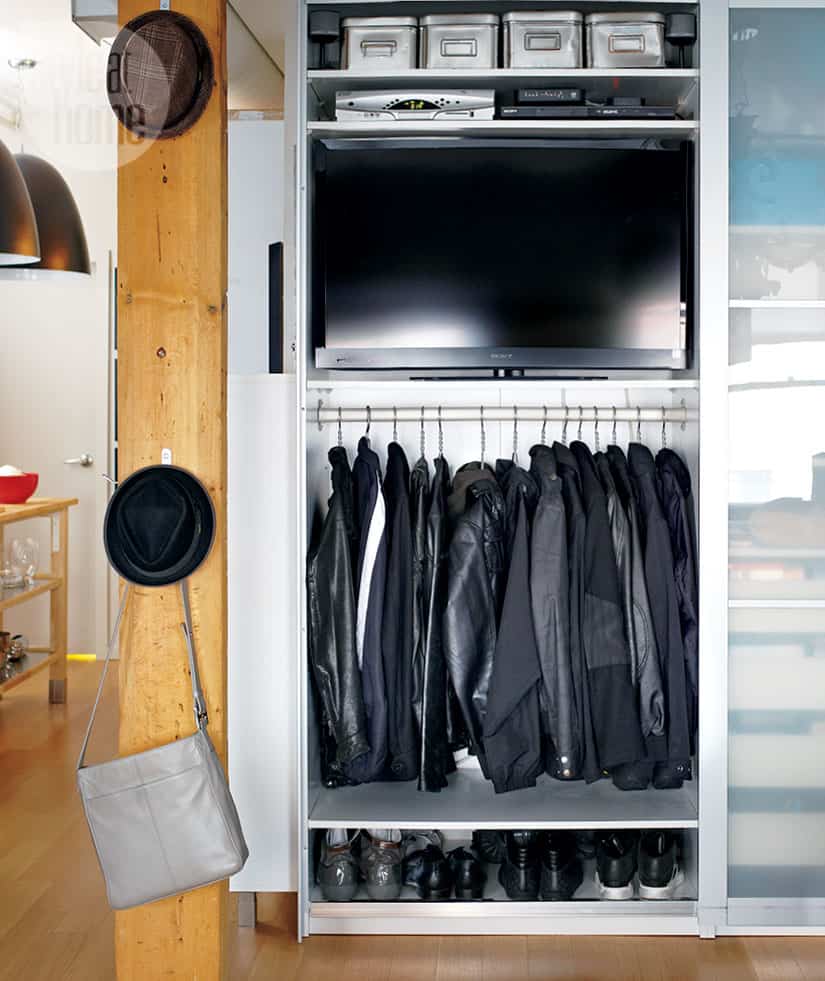 Space an issue? Ditch the dressers and go for one large closet. This one holds the couple’s clothes, shoes and photo tins, as well as the TV, which swivels out on an arm. “I like concealing TVs because they’re just black holes when they’re not turned on,” says Jamie. “I’d rather have art pieces on display.” 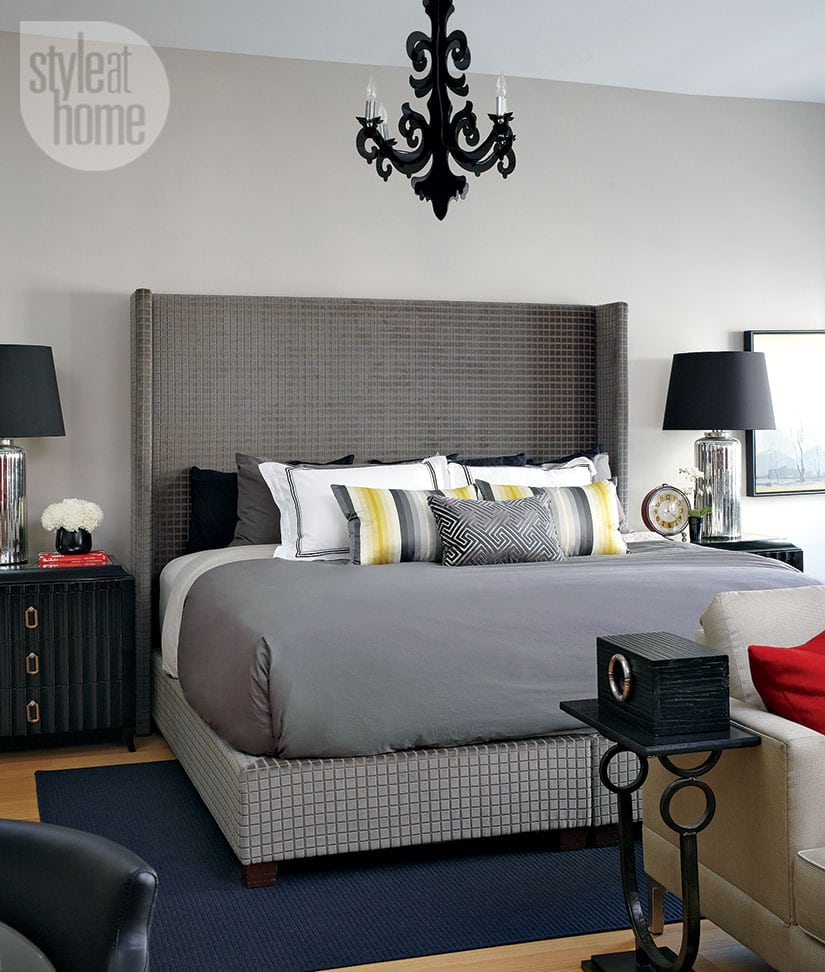 To balance the big bed, the nightstands are also oversized, each offering three deep drawers. “Not only does proportion work here, but it helps for storage,” says Jamie. “This is the only form of ‘ dresser’ we have!” Yellows and greys subtly separate the bedroom from other zones in the space. 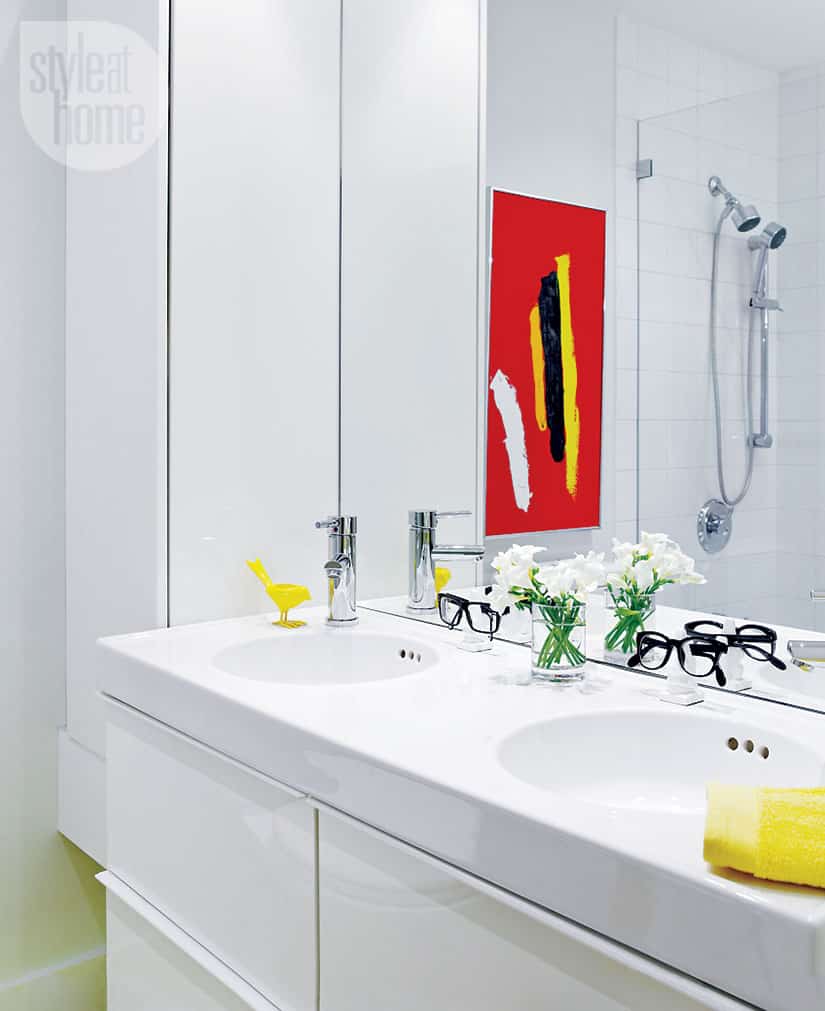 A sleek double sink vanity backed by a massive mirror is ideal for small spaces as it creates the illusion of more space.