This pretty loft in a historic building serves as the perfect small space getaway for a young Toronto woman.

Owner Tania Sarracini wasn't even house hunting when she accompanied a realtor friend to see this loft in a historic building. "He wanted my opinion," she says. But one look at the exposed brick wall and 11' ceilings, and Tania was sold on the place. Despite its authentic character and fab location in Toronto's trendy King West district, the 730 sq. ft. loft had its quirks. The main space, which was dimly lit by three small windows, had bowling-alley-like dimensions (20'x10'). "I didn't think I could decorate it myself," she says. A friend recommended Jessia Kelly Design. Again, Tania was sold, this time on Jessica's sophisticated urban style and experience with small spaces. Together they transformed the loft into a serene, pretty retreat that Tania could escape to at the end of a busy day. 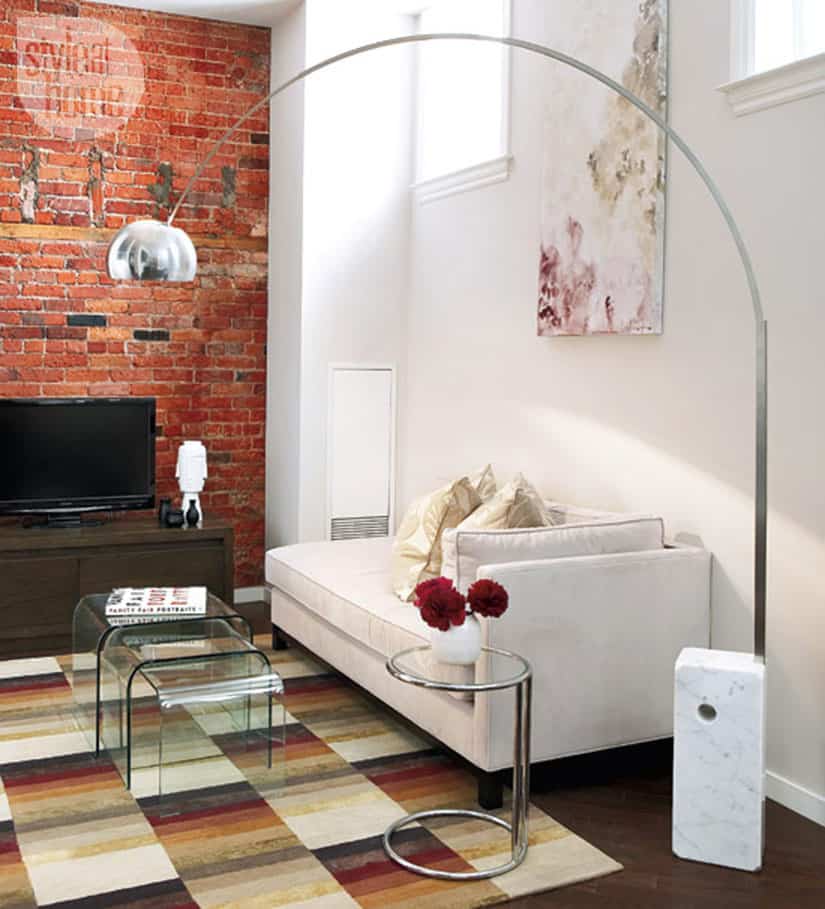 Living room "The jumping-off point for the scheme was homeowner Tania Sarracini's rug, which she'd already purchased. It tied nicely into the brick wall," says designer Jessica Kelly, who added cranberry accents to the neutral palette. The single-arm chaise saves space; a custom unit hides all the electronics. 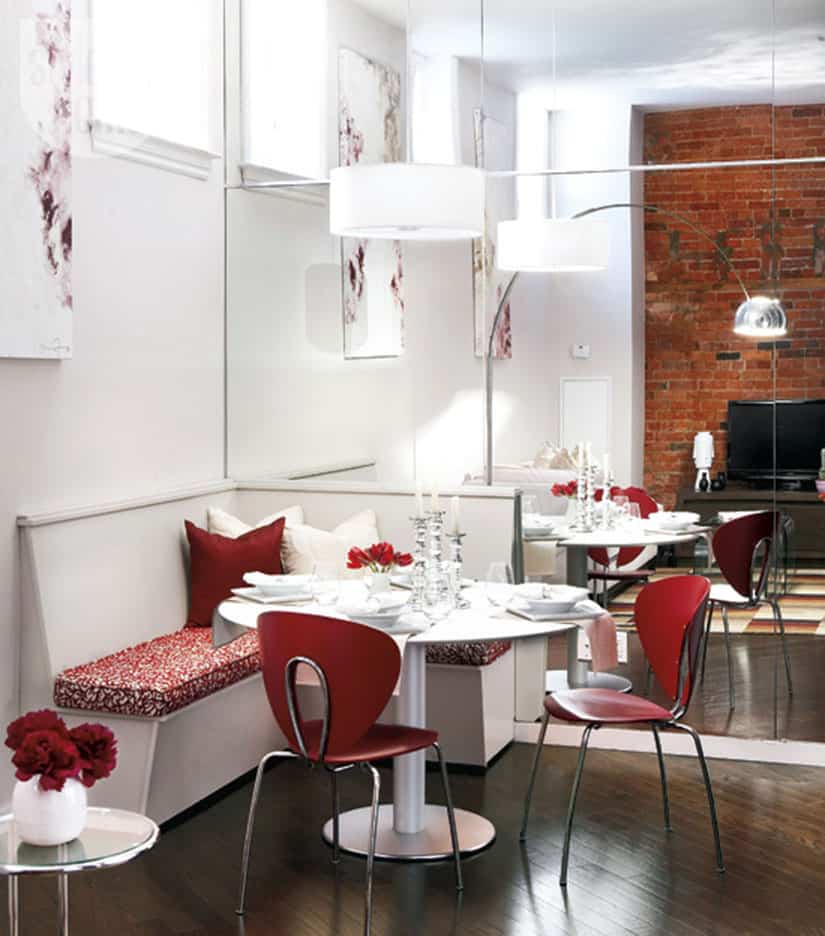 Dining area How to distract from the design challenges of the 20' x 10' main room? Here are three clever solutions:

1 A floor-to-ceiling mirrored wall bounces light into the space, so awkward dimensions and low light levels are less noticeable.

2 Instead of plunking a table and chairs in the dining area, which would eat up floor space, Jessica designed a banquette, creating a look-at-me feature.

3 Two large canvases lead the eye down from high windows. 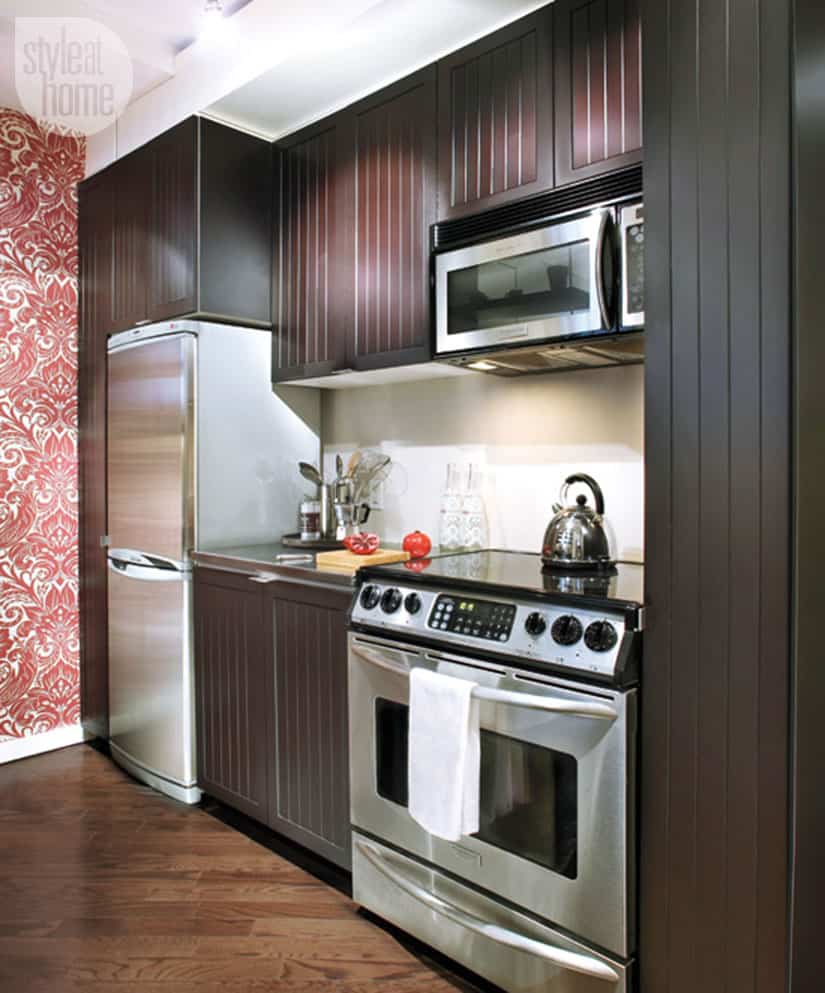 Kitchen Drop-dead gorgeous wallpaper gives the tiny 9'x4' kitchen grand style. "With a small wall, you can do something impactful, so I chose a bold pattern that mimicked the palette," says Jessica. A great eye tricker: "The wood floors are on the diagonal, which creates the illusion of more space." 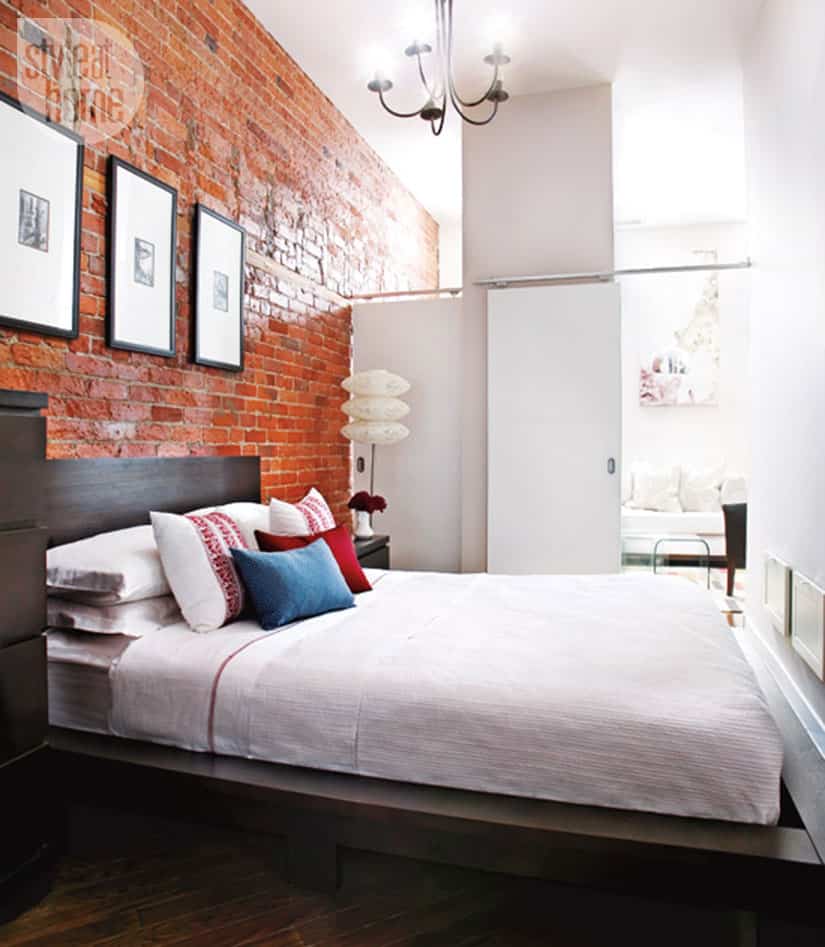 Bedroom Tania's furniture is big for her small bedroom, but clean lines and a low profile keep the room uncluttered, as do neutral tailored bed linens. Hits of cranberry provide warmth and continuity.

Bathroom "I wanted one room to be a different colour," says Tania. No problem: Pavanne from Pratt & Lambert is one of Jessica's faves for a bathroom. "It's tried and true -- a watery blue that's not too green," she says. The wooden box under the sink, from the previous owner, solves the storage challenges posed by the slim shelf.