A modern loft that exudes plenty of warmth.

Design firm Feasby & Bleeks mixes styles to make the most of a small space.

You've got to accentuate the positive - that's what the old song says, and it must have been the tune that designer Erin Feasby was humming when she and design partner Cindy Bleeks of Feasby & Bleeks decorated this west-end Toronto loft. Not that there wasn't plenty of "positive" to work with - soaring 11-1/2 ft. high ceilings, exposed brick and ductwork, and tons of natural light - but at 800 sq. ft., the two-bedroom unit was small and its layout a little quirky.

"Trying to eke out a sitting area in the living room was challenging, and there was no room for an eating area," says Erin. So she and Cindy decided an unconventional layout required unconventional solutions. "We opted for eating at the bar to retain more living space," says Erin.

Though the loft was tight on space, they decided against an apartment-size sofa; instead, the designers chose a daybed for the living room. "With no back, it's visually less choppy," says Erin. "You're not always going to be in a loft, so you want pieces that will work later on." It's better to buy fewer pieces at higher quality, she says. 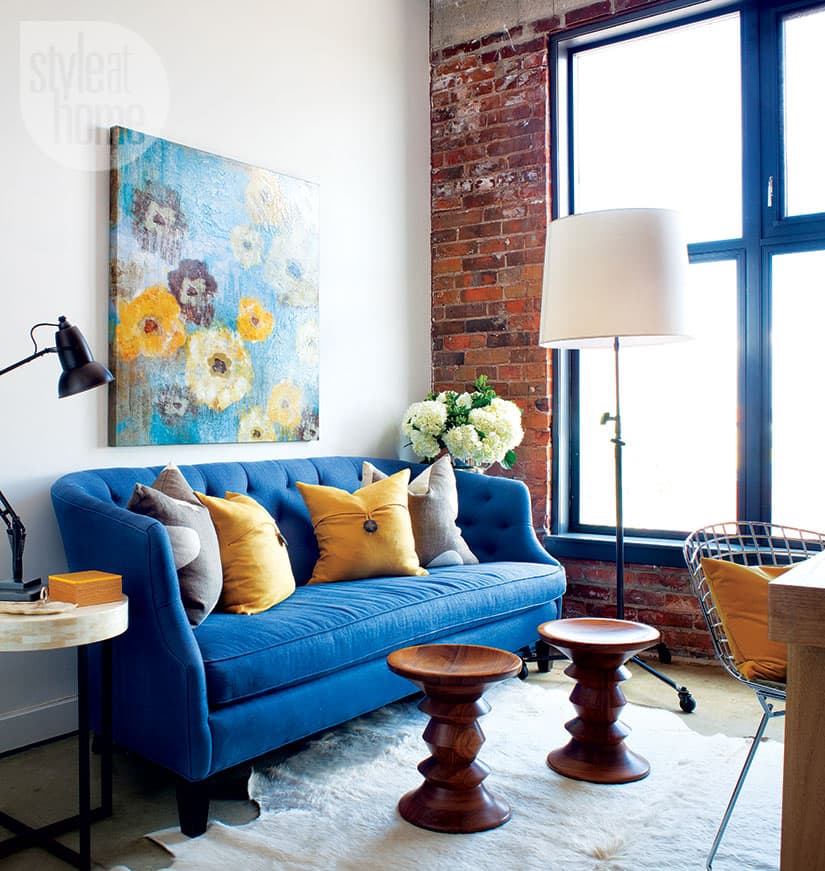 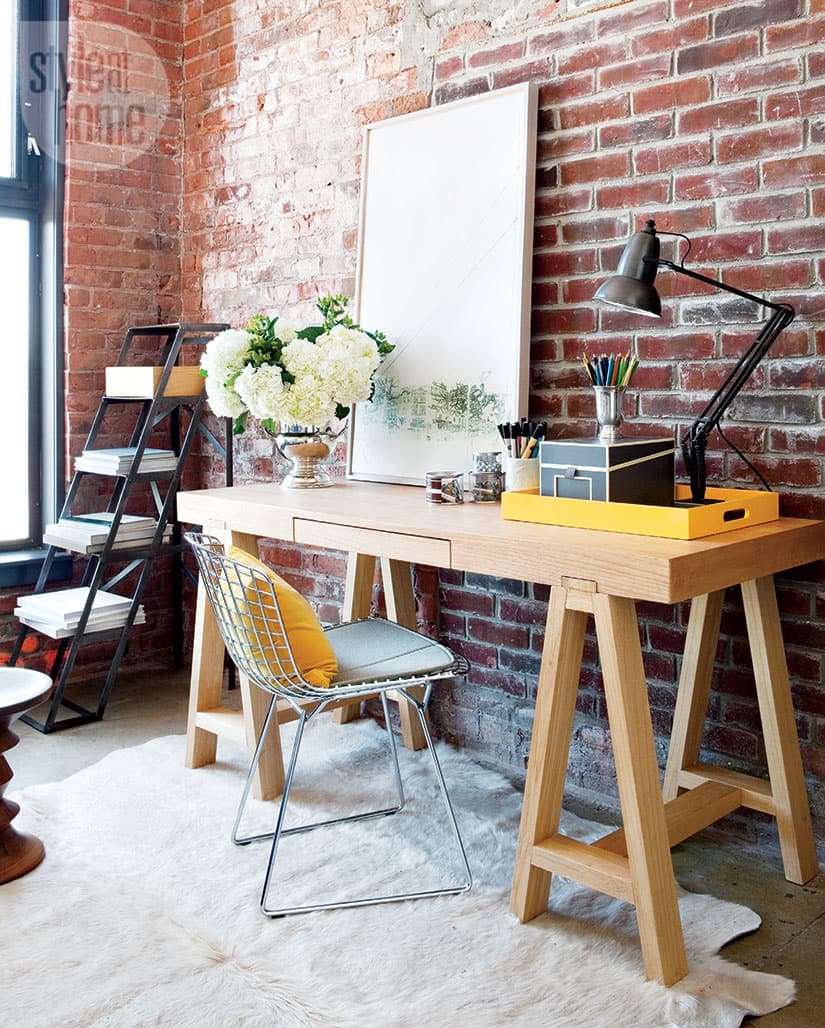 "It would have been easy to go with a glass-and-metal desk," says designer Erin Feasby of Feasby & Bleeks, but that would have created a cookie-cutter modern loft style she and design partner Cindy Bleeks wants to avoid. The chunky wood desk they chose "adds warmth and complements the brick," says Erin. 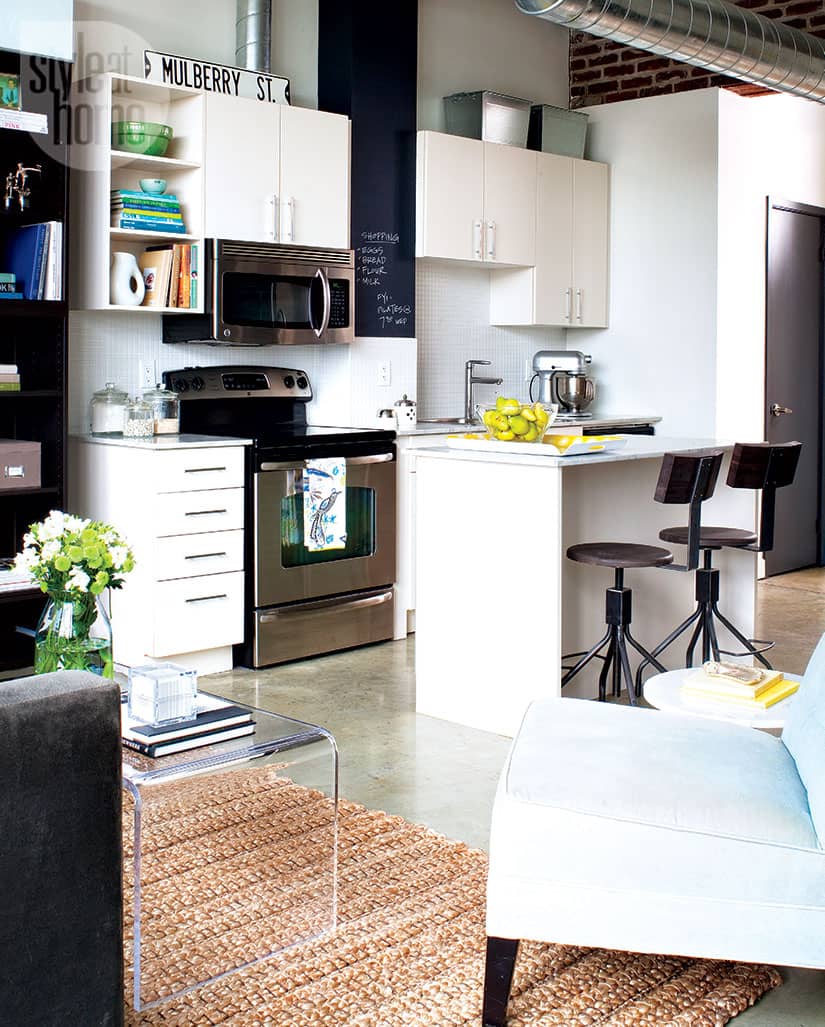 "We covered the jut-out in the kitchen with chalkboard paint," says Erin. "Doing so really made a functional feature out of unusable space." Erin and Cindy also treated all the interior doors to a coat of charcoal grey paint, turning them into intentional decorative elements. The door beside the kitchen leads to a walk-in pantry -- a bonus in a small space. 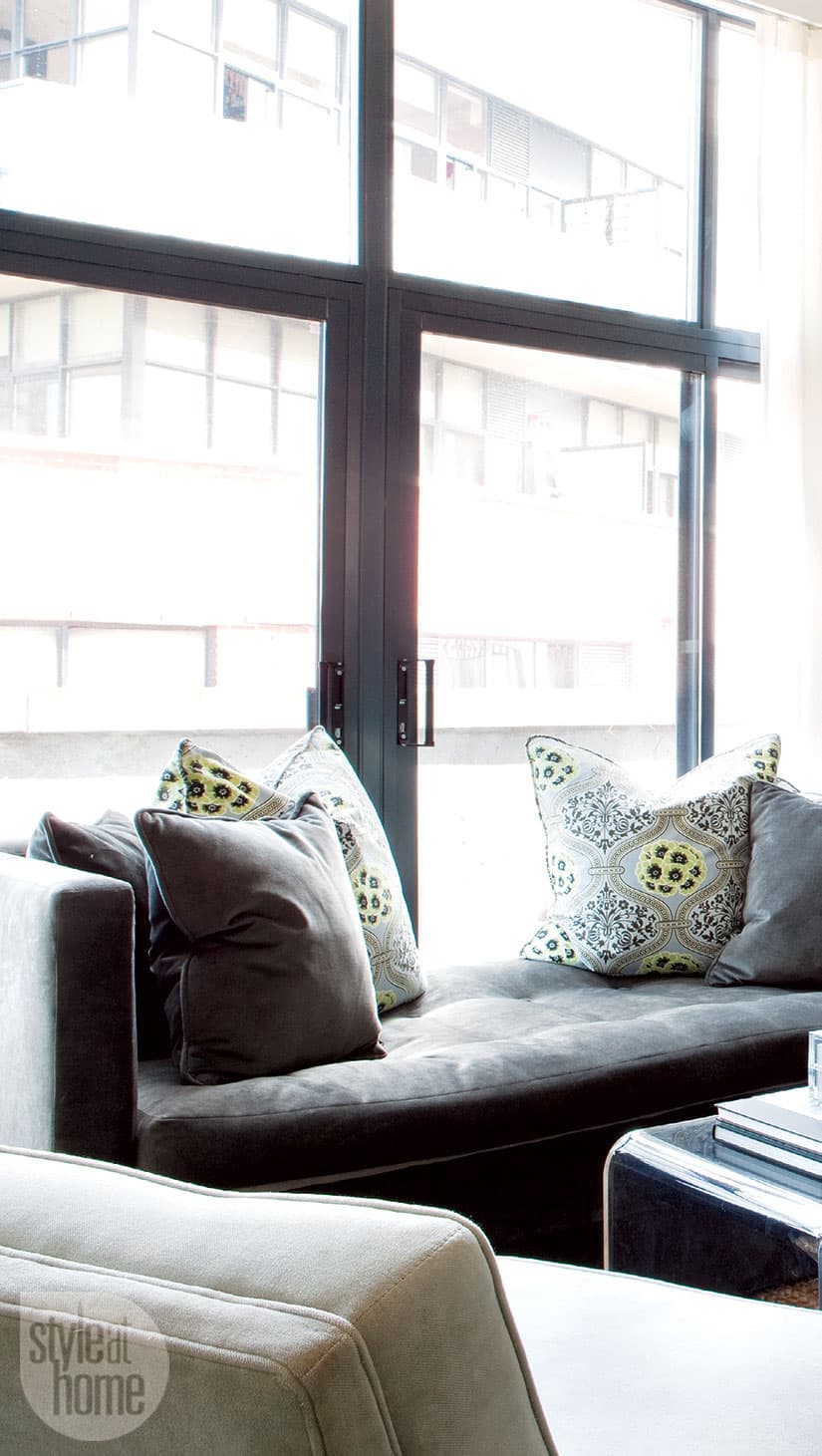 You simply can't afford to waste space in a compact 800 sq. ft., even on a vertical scale. The soaring ceiling allowed Erin to install tall shelves to accommodate the TV, storage and display areas. 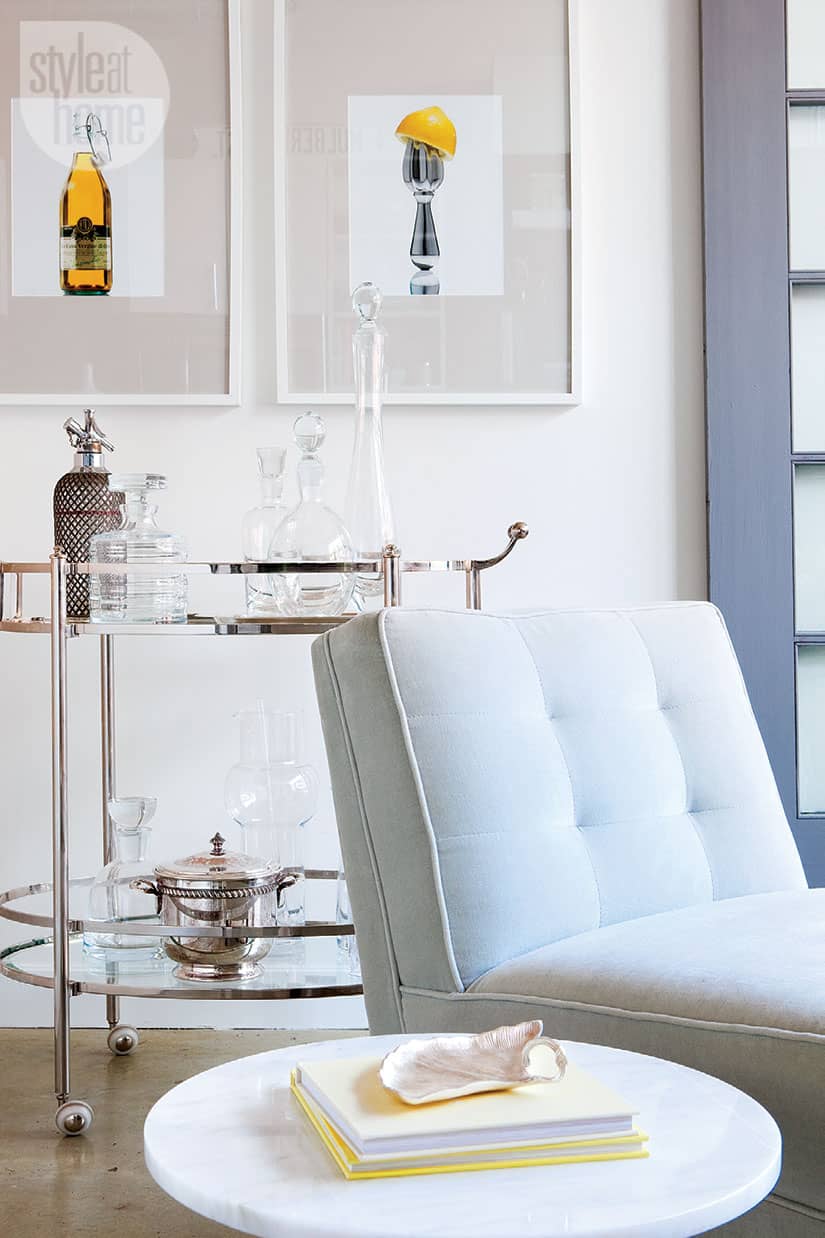 Shiny metals and glass were used throughout the loft for sparkle, contrast and to reflect light. The bar cart has a delicate, sophisticated profile. 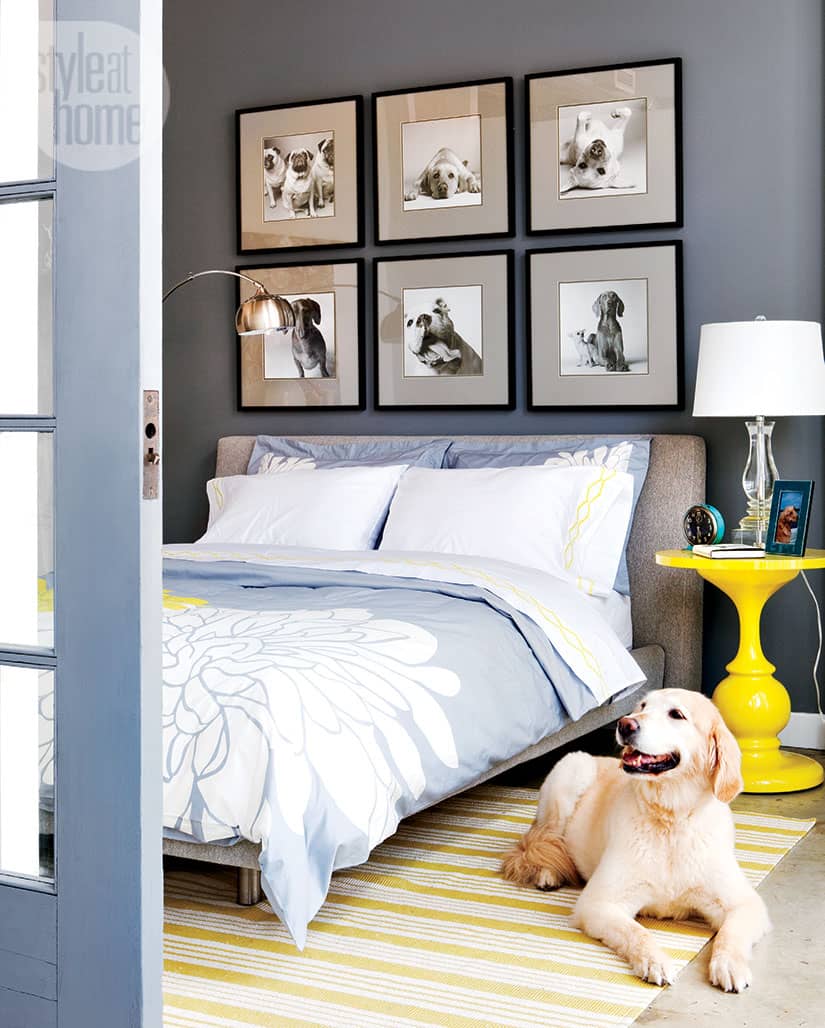 The original sliding wood-slab door that separated this bedroom from the main space was "calling out" for help, says Erin. She decided to swap it for a reclaimed French door with the right dimensions. The wall space above the bed was in danger of becoming a great big blank surface, so Erin painted the wall in an accent colour and arranged an artful display that doesn't take itself too seriously. Gracie, Erin's golden retriever, approves. 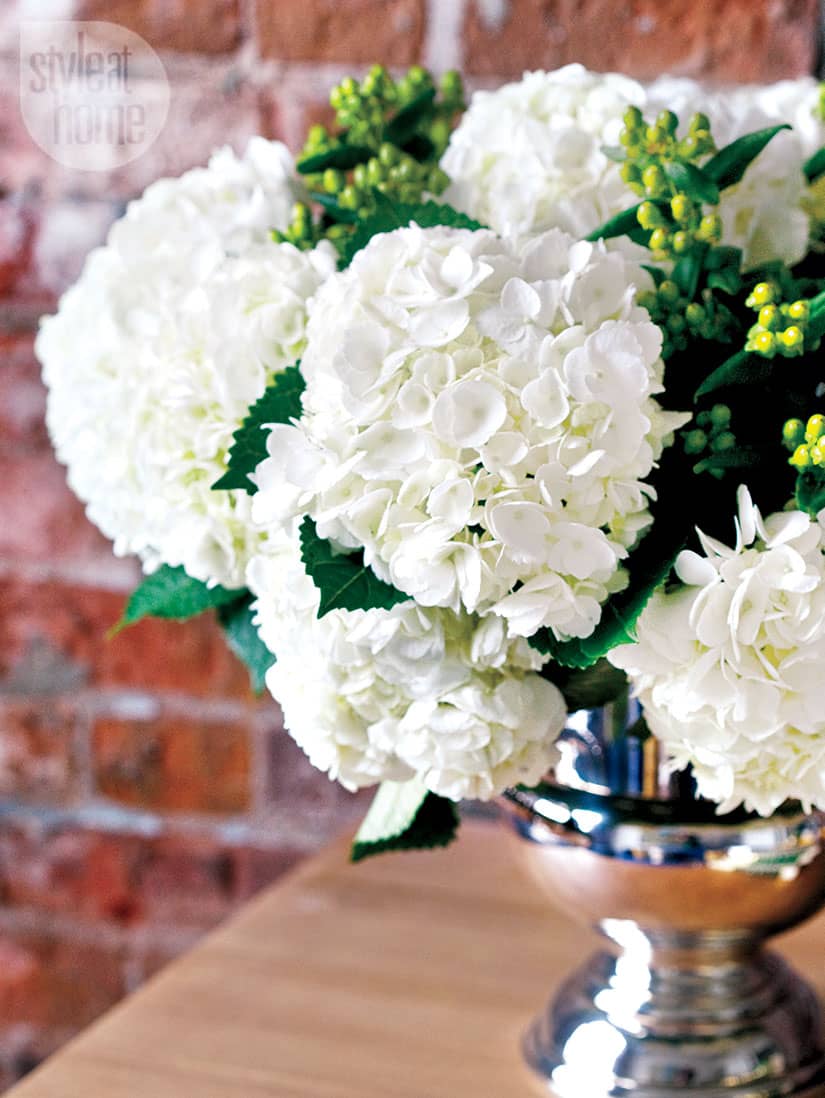 Designer Erin Feasby shares her dos and don'ts for packing big style into a small space:

-  Do focus attention away from the size by highlighting a home's best feature; here, custom drapery shows             off the loft's outstanding windows.

- Do be brave and customize the space to your needs. For example, Erin nixed the master ensuite in favour               of a walk-in closet equipped with washer and dryer. Brilliant!

- Don't overfurnish. Go for quality pieces that suit the space, but don't relegate yourself to apartment-size               everything -- mix it up.

- Do consider the visual bulk of furnishings. Transparent pieces, like a glass coffee table, are great because            they can virtually disappear. 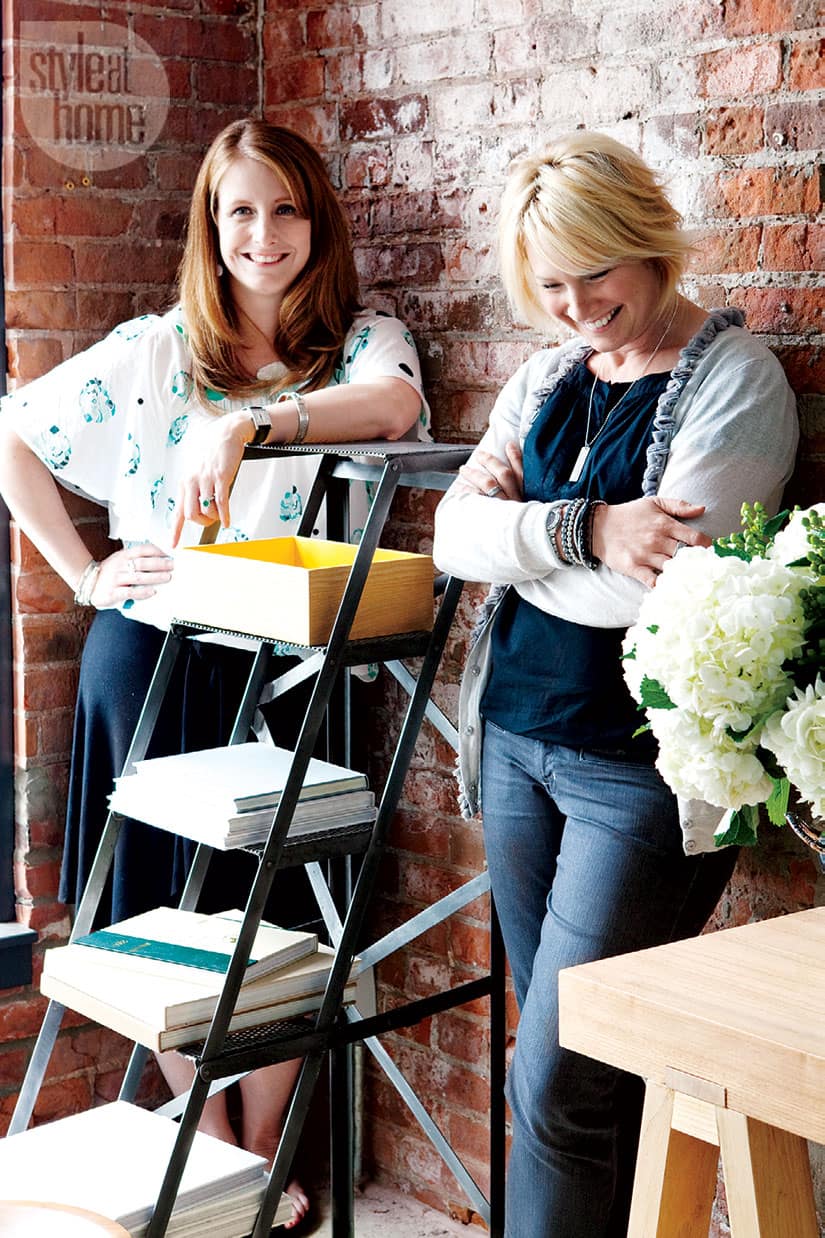 Erin (left) and Cindy in the den. Erin loves this industrial-style ladder for its double-duty use as a great display area as well as for access to the highest shelves.