A pair of sisters with different spins on style bought condos across the hall from each other – and it was the best of times.

When they were little girls, Lauren and Mariel Armstrong shared everything: secrets, clothing and the flair for style they inherited from their mother. “We ended up working together in fashion,” says Mariel, referring to PartySkirts, an online shop full of fun and flirty clothes she co-owns with her sister. “But we had no idea that we’d also end up buying condos in the same city, let alone in the same building and across the hall from each other!” They both hired designer Gillian Segal to imbue their homes with styles that reflect their fashion savvy and personal tastes. The result? Striking spaces that are as similar as they are different: the yin and yang that only the closest of sisters can achieve.

Bright and sparkly, Mariel’s 1,100-square-foot home is all about fun, with cool tones, shiny objects and bursts of girly colour everywhere. She’s the little sister – and her playful personality shines through. “I live in a state of organized chaos,” says Mariel with a laugh. “One minute, it’s fine. The next, it looks like a bomb went off.” Having few furnishings and accessories helps her keep clutter at bay, creating a stylish Parisian-chic aesthetic that feels refined and romantic. 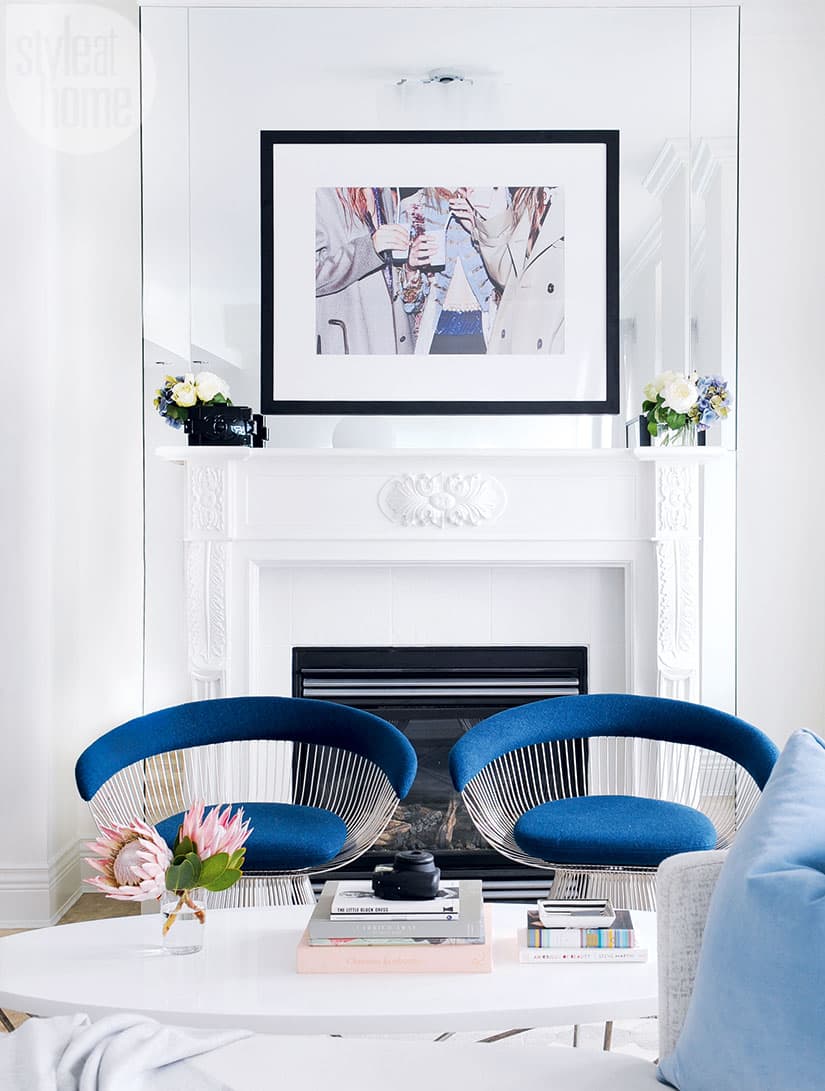 Whether Mariel is hosting friends for cocktails or simply enjoying snacks with her pooch, Herb, the living room is party central. The condo is small, so designer Gillian Segal chose flexible furnishings. The tête-à-tête can be accessed from both the living and dining areas. Meanwhile, the airy sidechairs keep sightlines open and can be moved around as needed. The look is girly modern: sleek and simple but still oh-so ooh-la-la. 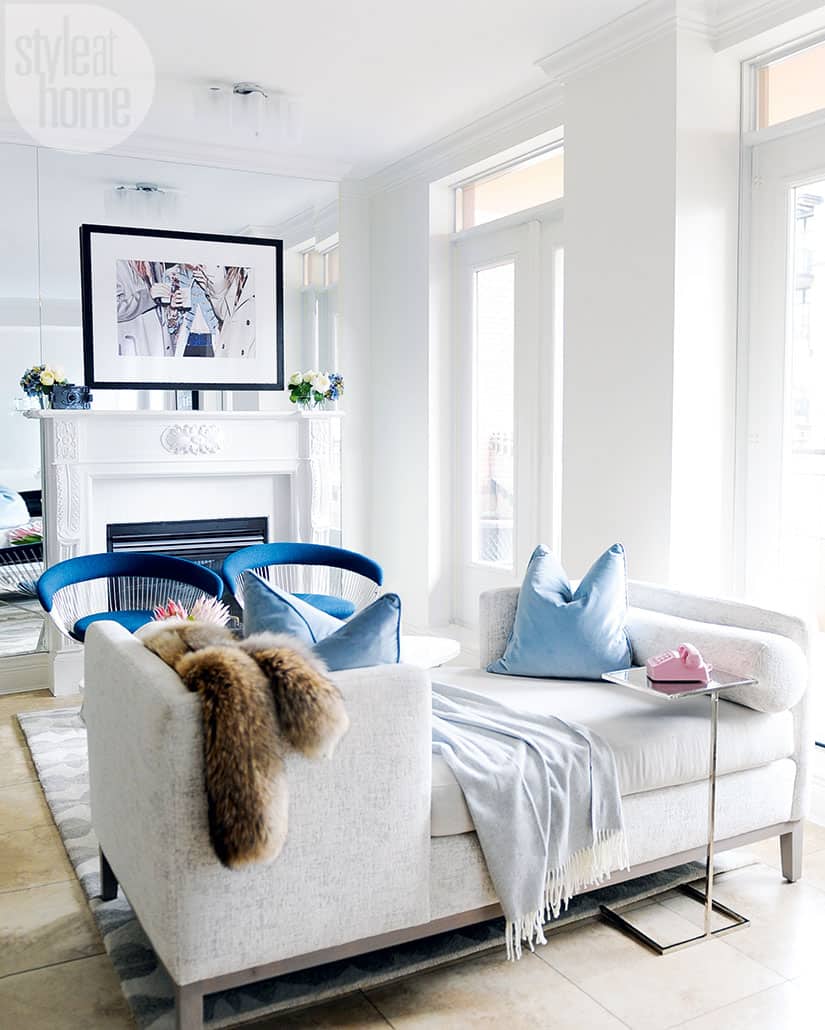 “I love photography and fashion,” says Mariel. “A shot taken backstage at a fashion show seemed perfectly fitting for me to hang over the fireplace.” The blue jacket in the photo became the inspiration for the living room accents – Gillian had the toss cushions made out of a velvet the exact same shade. But the sculptural spoke-backed sidechairs, with their polished chrome bases, are the real stars of the show, picking up on the shimmery details deployed throughout the rest of the condo – even in the bedroom, where the tufted headboard’s trim and toss cushion beading shines. 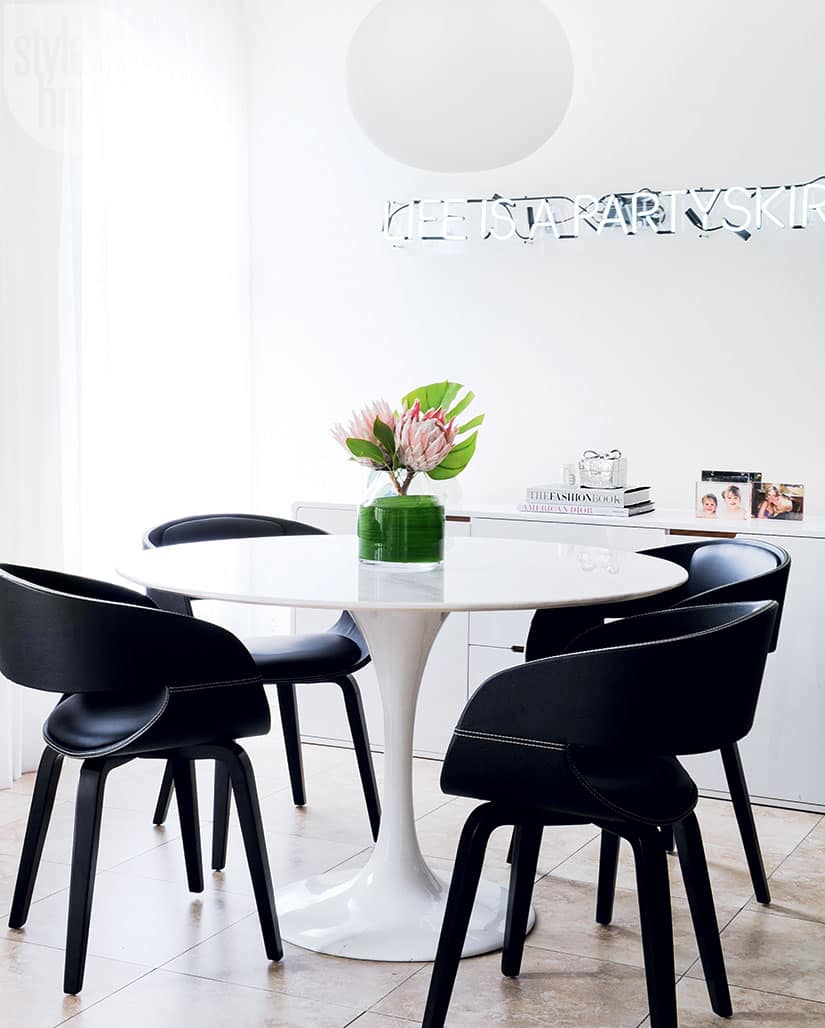 Since Mariel dines, lounges, entertains and daydreams all in one open-concept space, she wanted it to be refined and adaptable. Gillian paired a neon PartySkirts sign with no-nonsense minimalist pieces, such as a sleek white Saarinen-style dining table (the counterpart to her sister’s black one) and sculptural dining chairs. 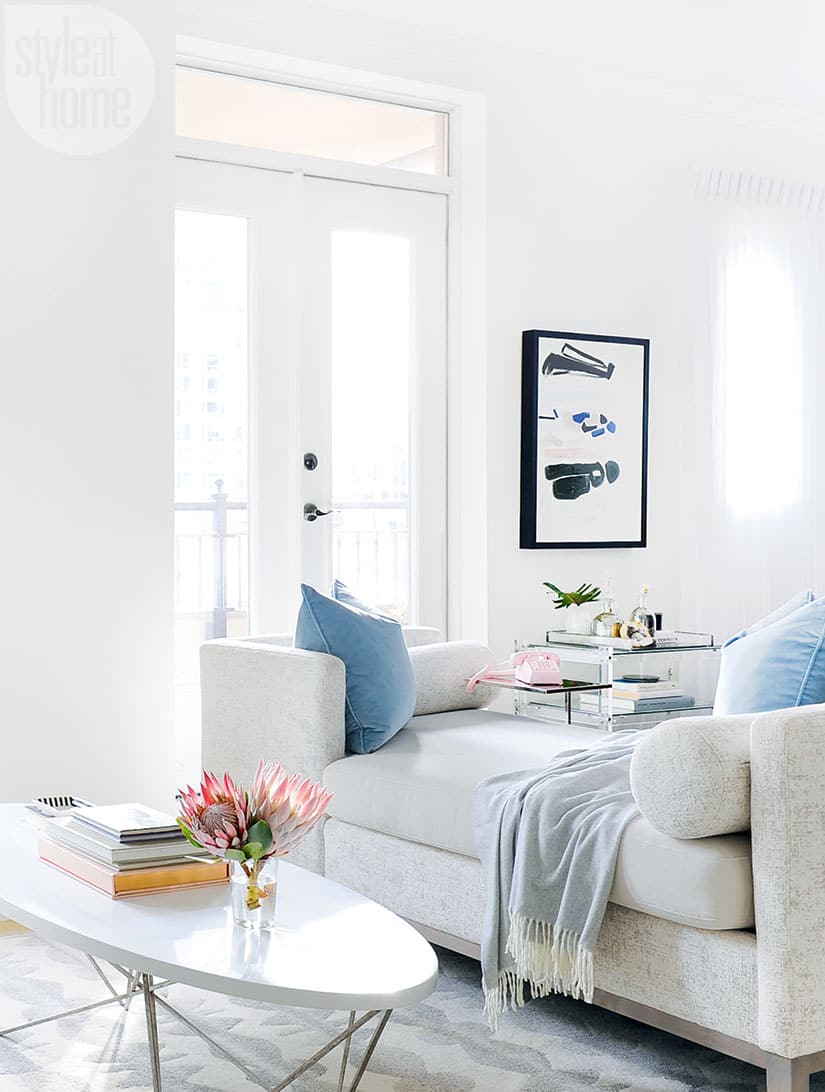 The apartment is as much Herb’s place as it is Mariel’s, so the sofa needed to be practical. Gillian opted for a washable slipcover for the seat cushion and suggested an inexpensive rug for the room in case the dog is naughty.

Dark and moody, Lauren’s 1,100-square-foot home is the epitome of sophistication and the yin to Mariel’s yang. “I wanted this place to be stylish, but not overly feminine,” she explains of her penchant for polished style. Rich deep hues provide the perfect backdrop for elegant and edgy furnishings. “I love mixing high with low,” says Lauren. She mixes big-box-store finds with custom pieces for an unabashedly glam look. 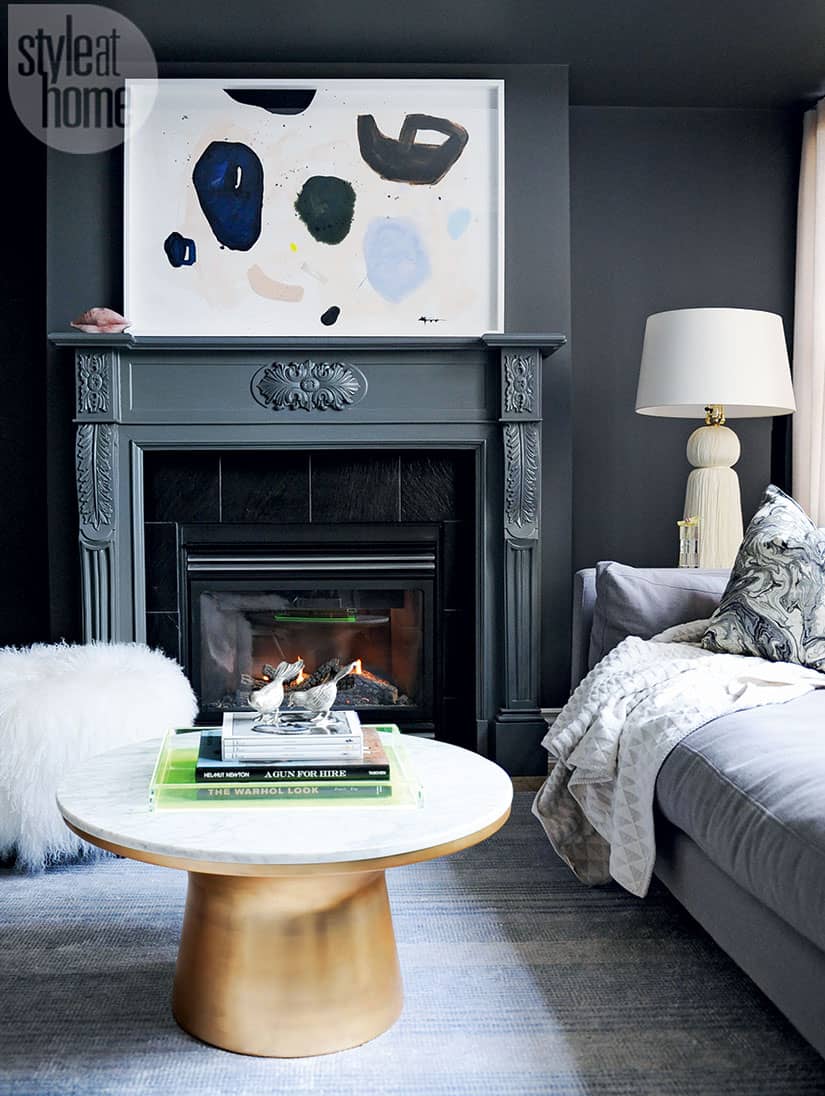 “Great design is about taking risks,” says Gillian. Lauren agrees. Together they defied convention by using deep hues, though the condo is small, and mixing metals like brass, chrome and bronze (rather than keeping the accents uniform). The result is a space that looks layered, collected – and stylish. 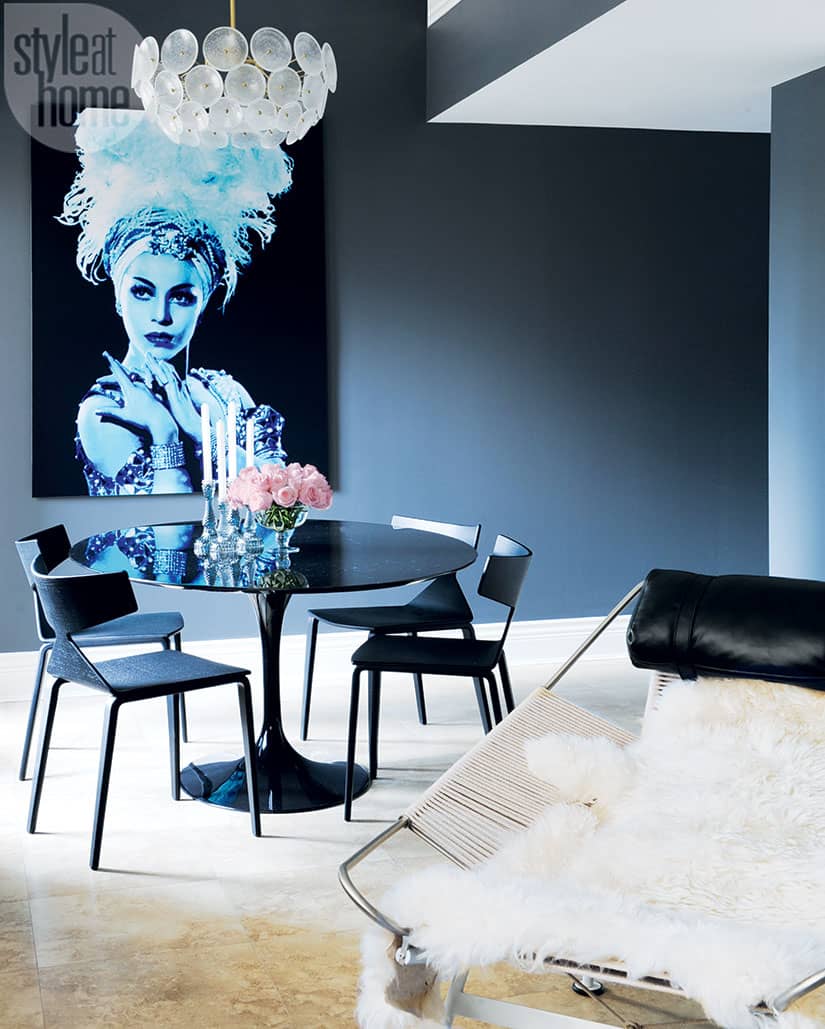 Bold oversized artwork defines the dining room, at once standing out and blending in with the blue undertone of the grey walls. The high-gloss black dining table was another daring move. The reward? A reflective surface that “doubles” everything that’s set on top. 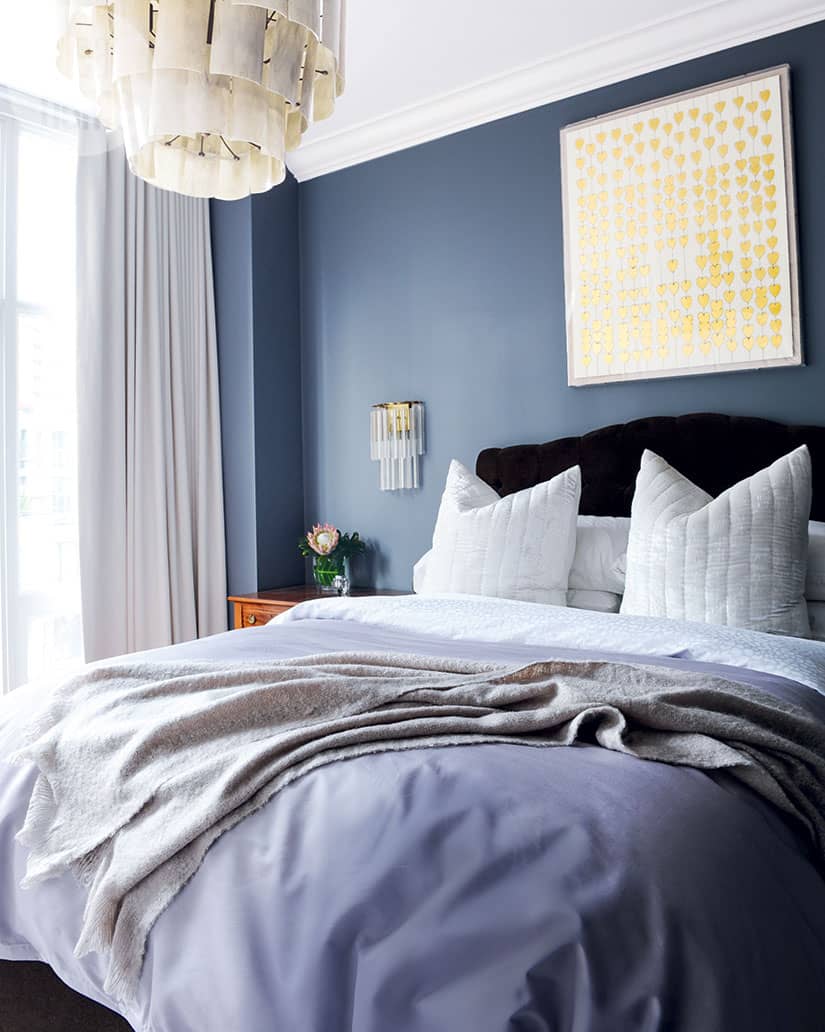 Glimmering gold-leaf heart artwork over the bed reflects Lauren’s romantic nature, while the soft velvet-upholstered headboard from her childhood speaks to her nostalgic side. The bedding’s varied textures lend a luxurious look, as does the warm linen drapery. 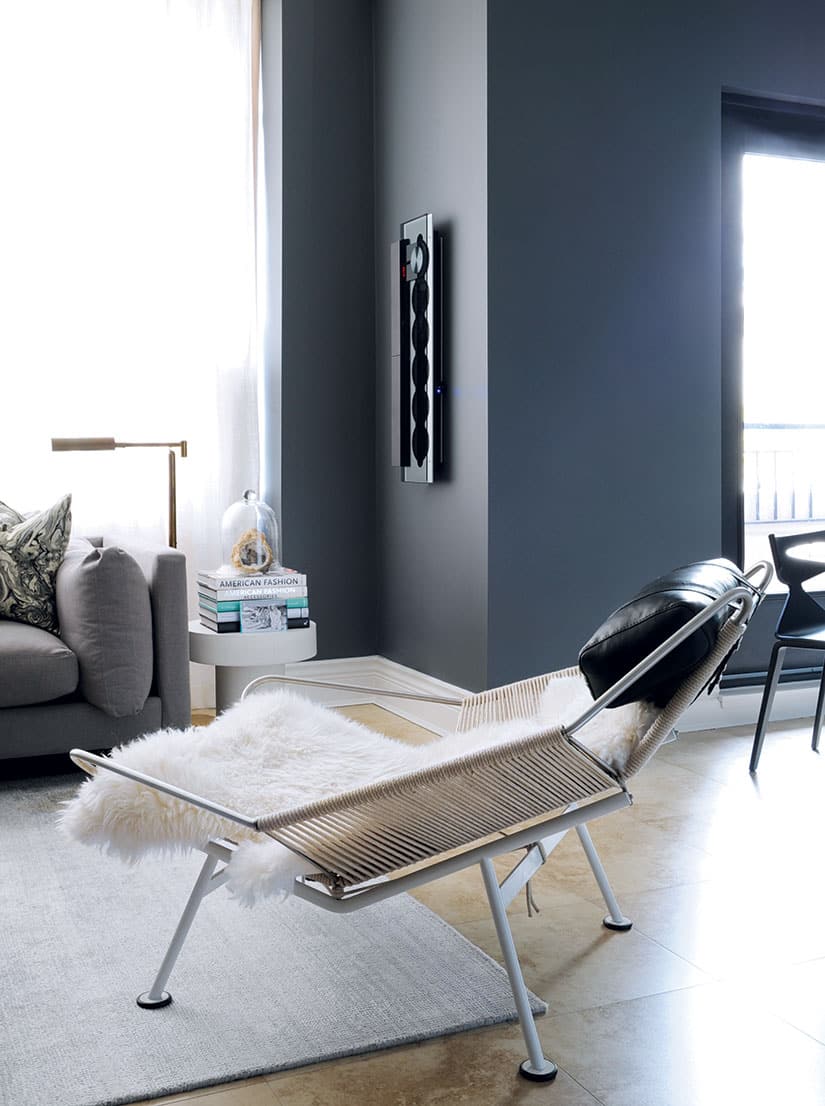 There’s at least one unexpected element in every room of Lauren’s condo, but in the living room, the über-angular mid-century-style lounger is one of several eclectic pieces. “The chair was Gillian’s idea,” says Lauren, who was thrilled with how well the designer understood her aesthetic. “Working with a professional lets you be you...but better.”

See more of Mariel and Lauren's spaces in the slideshow below. 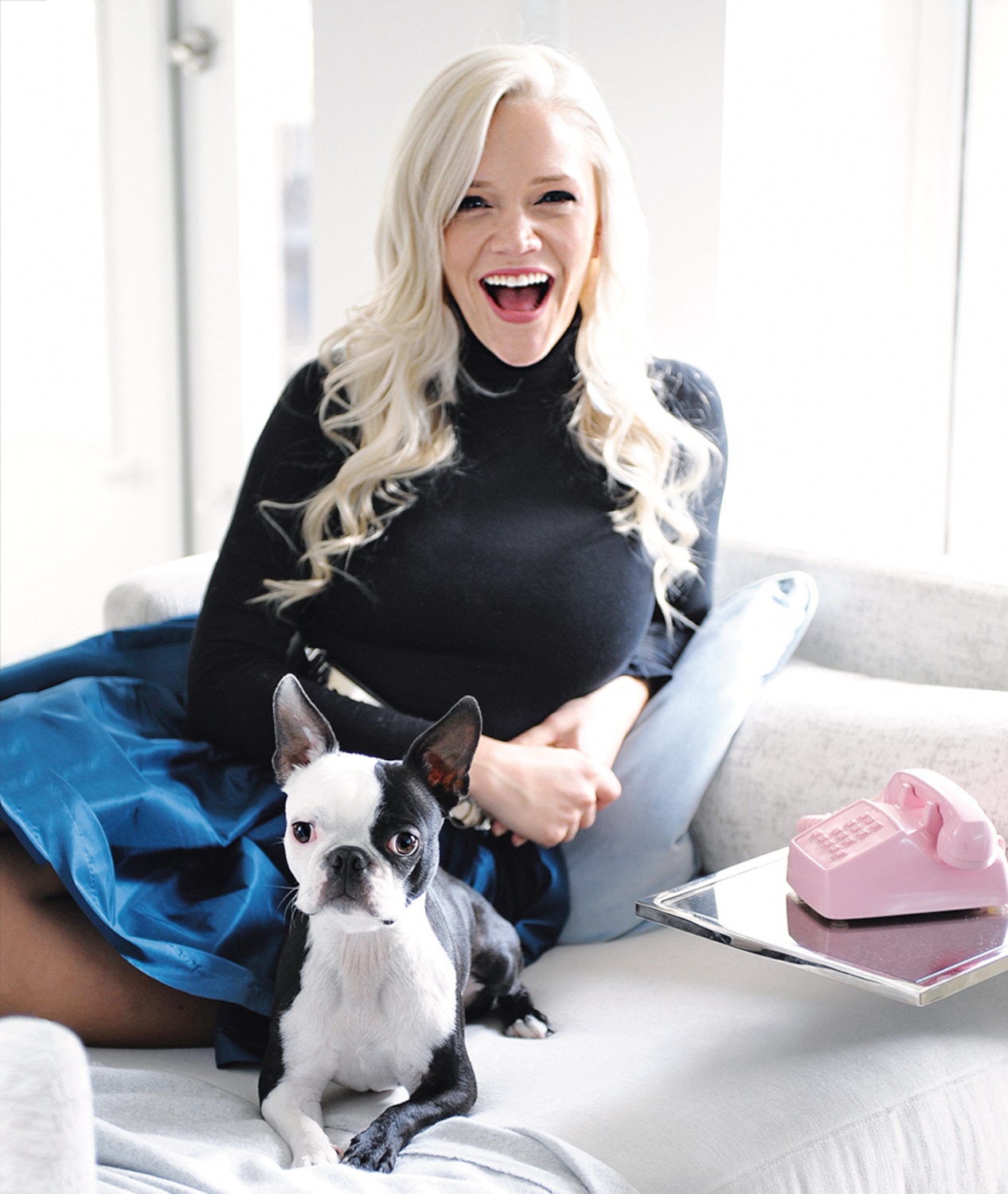 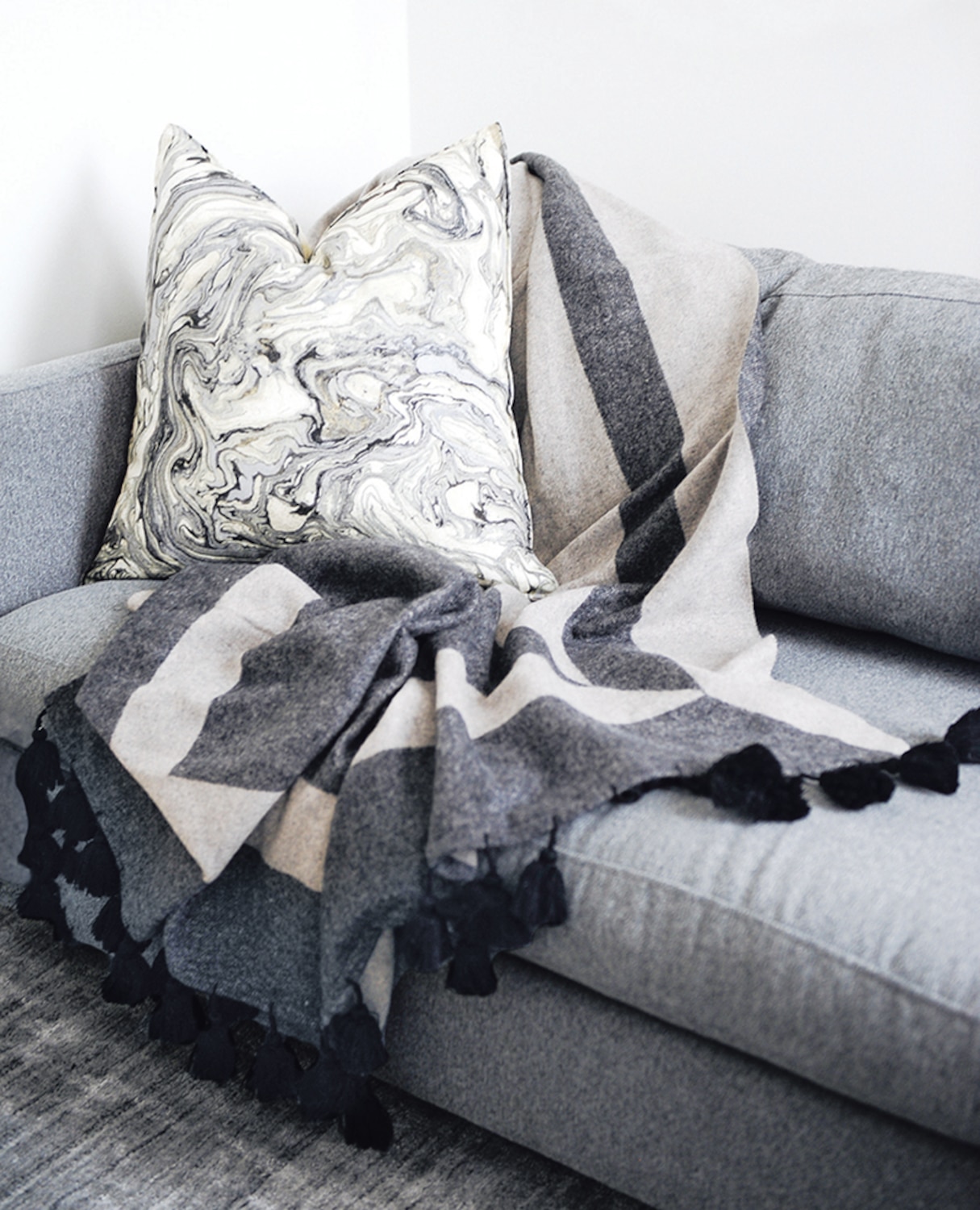 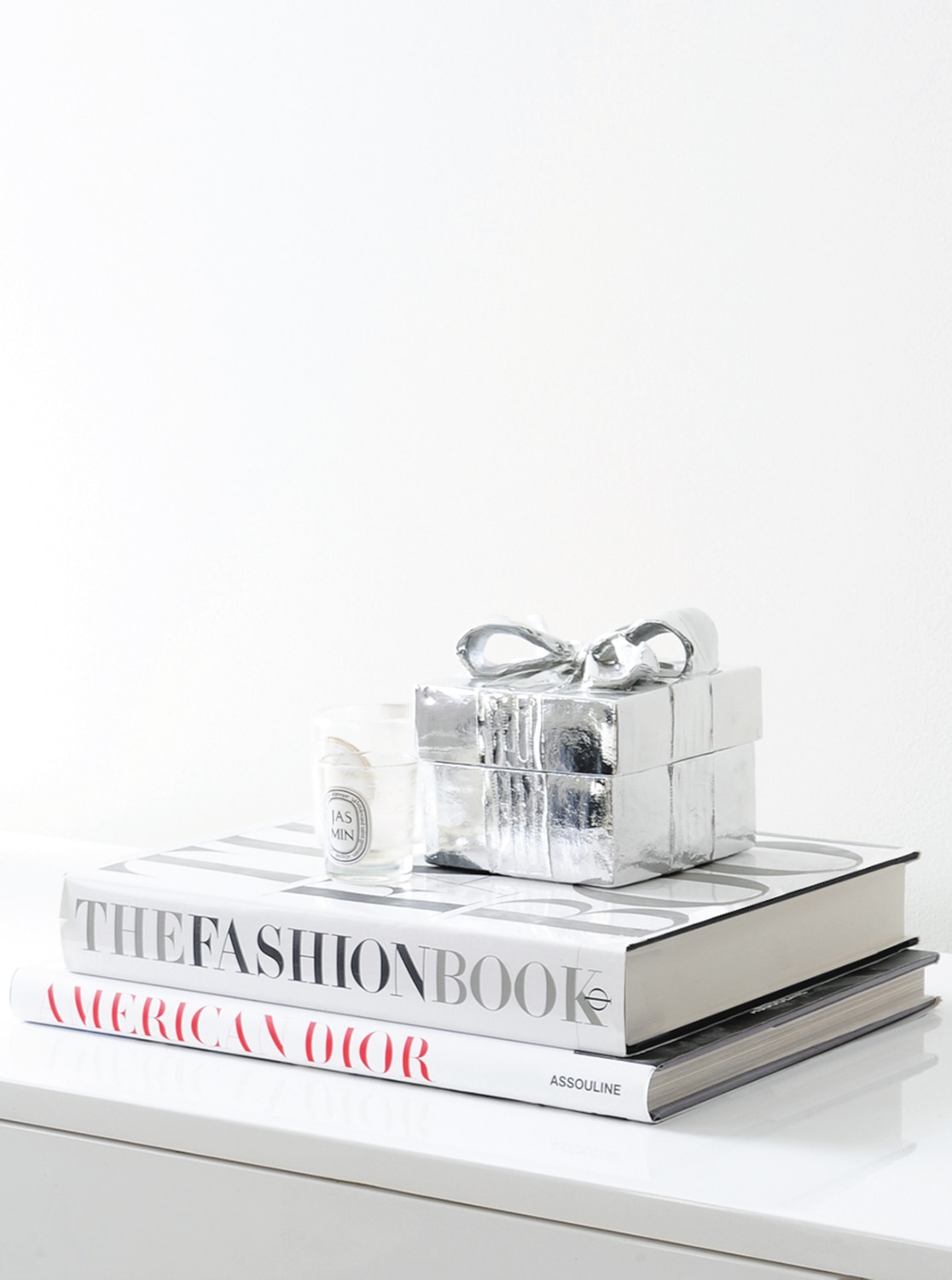 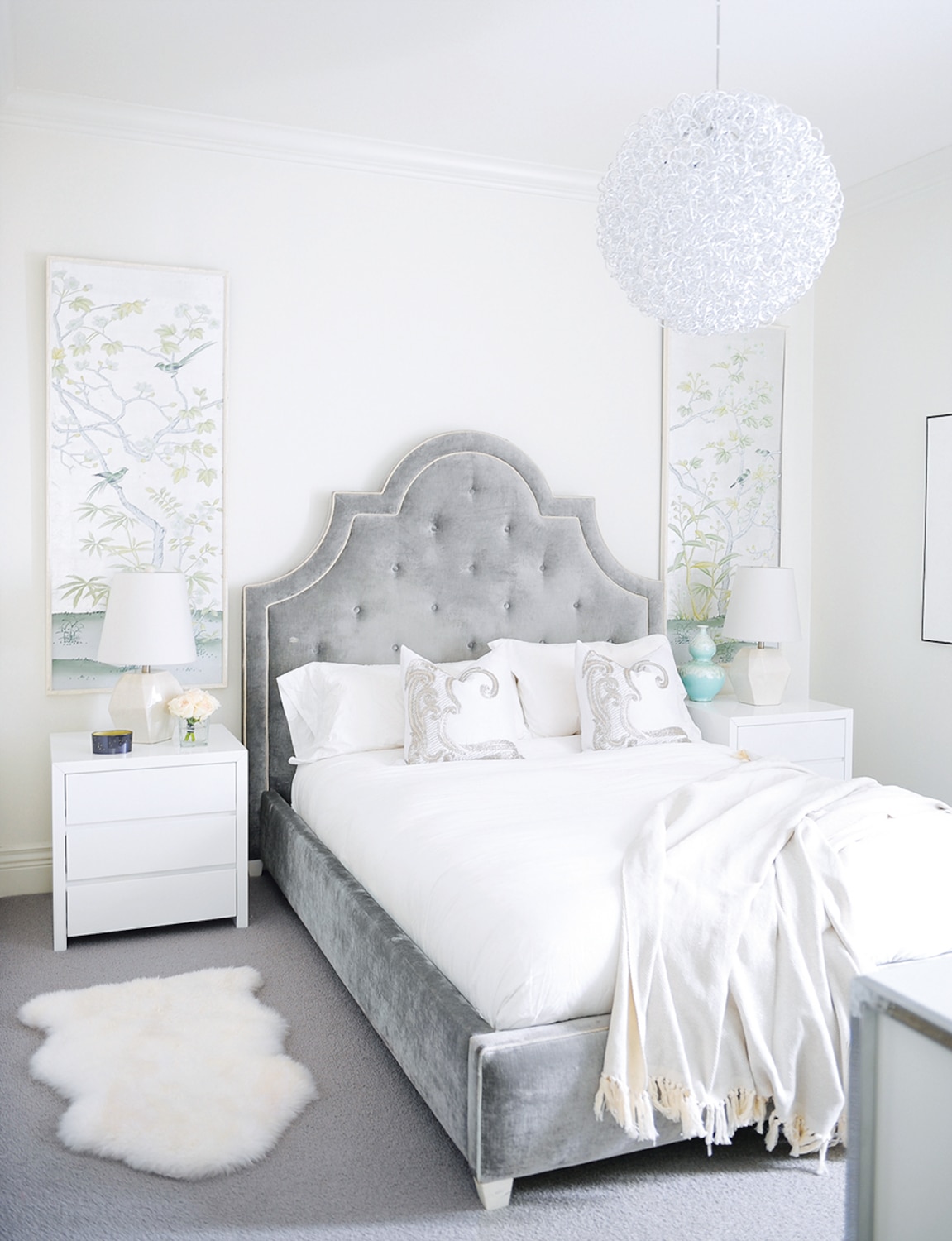 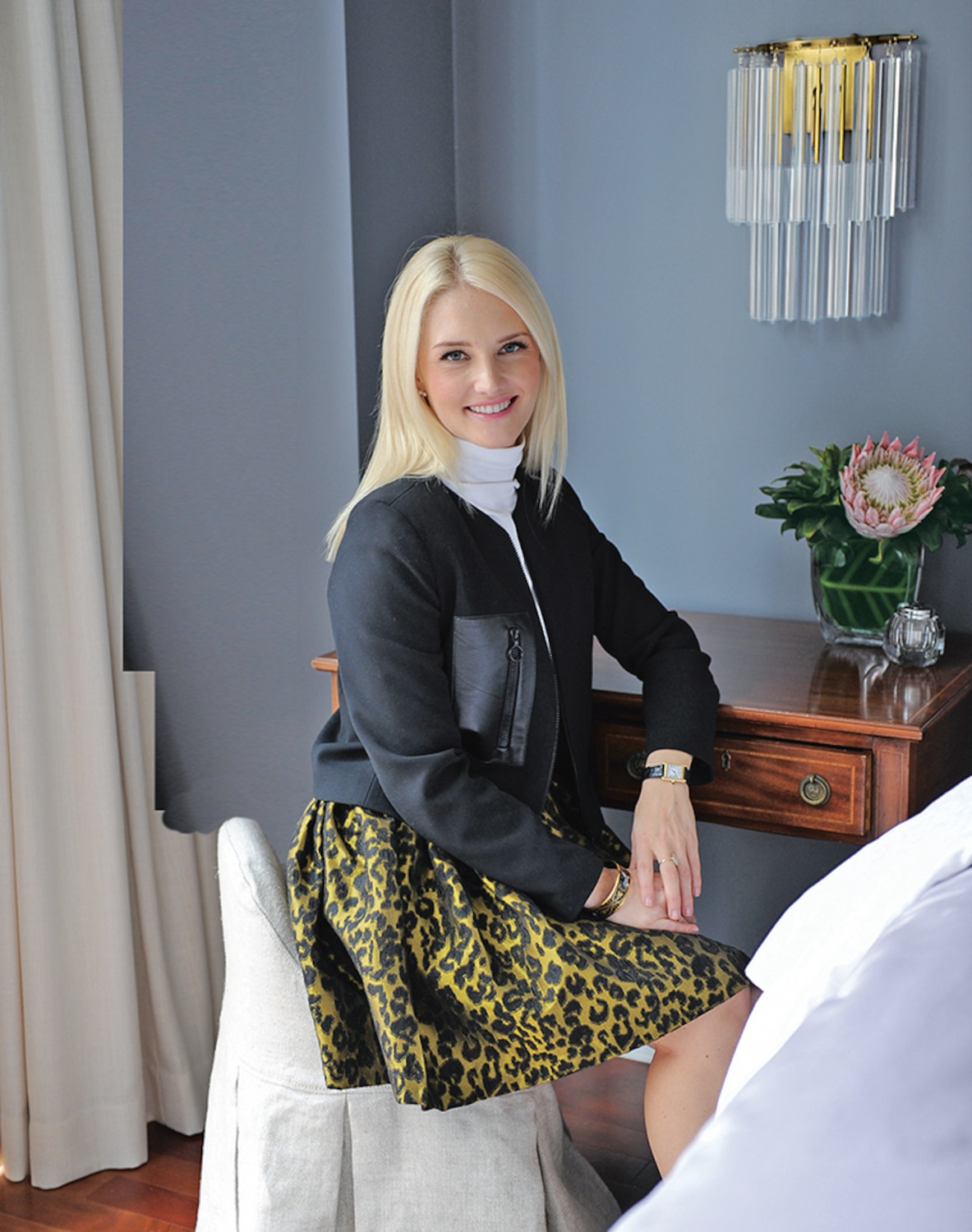 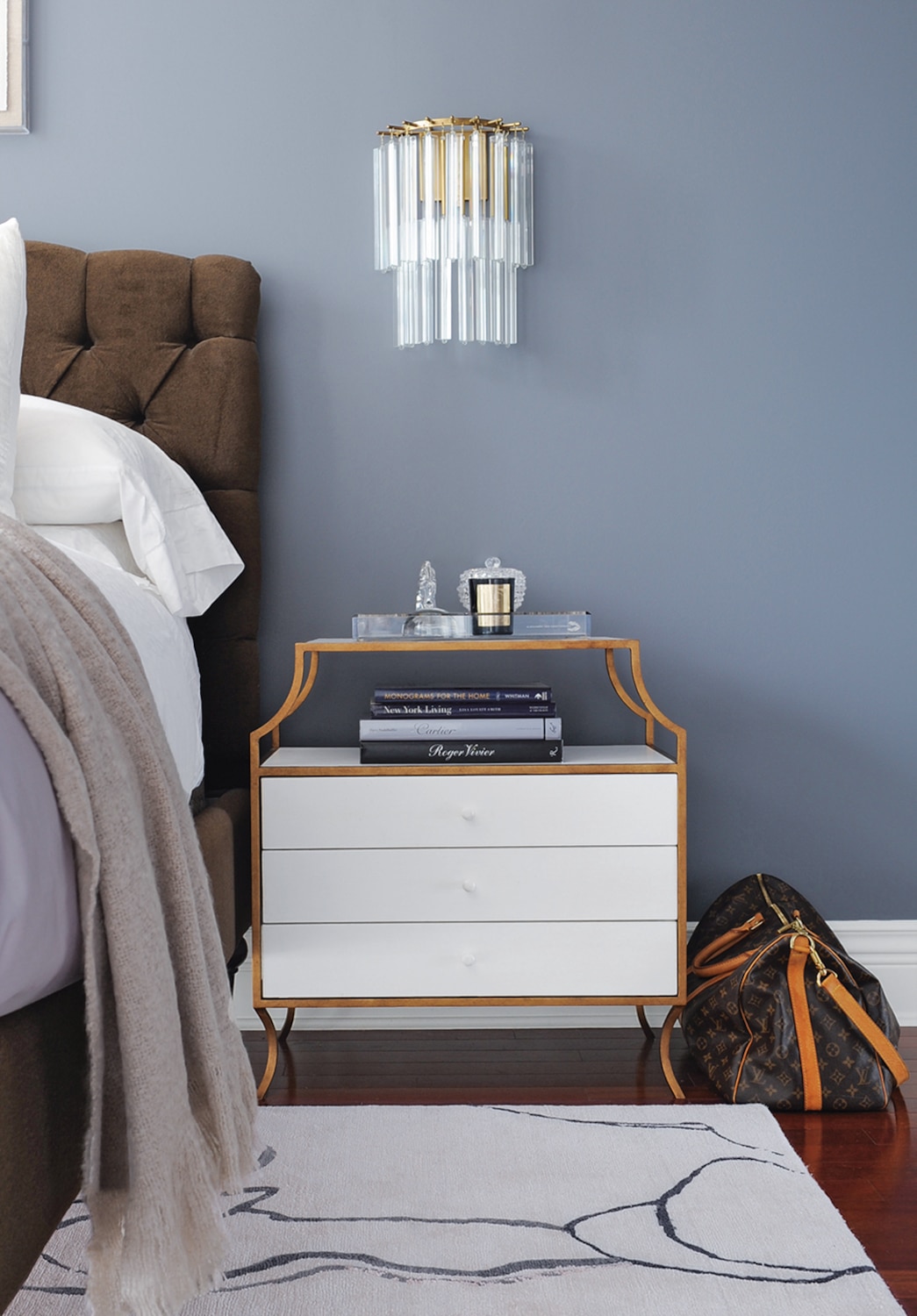 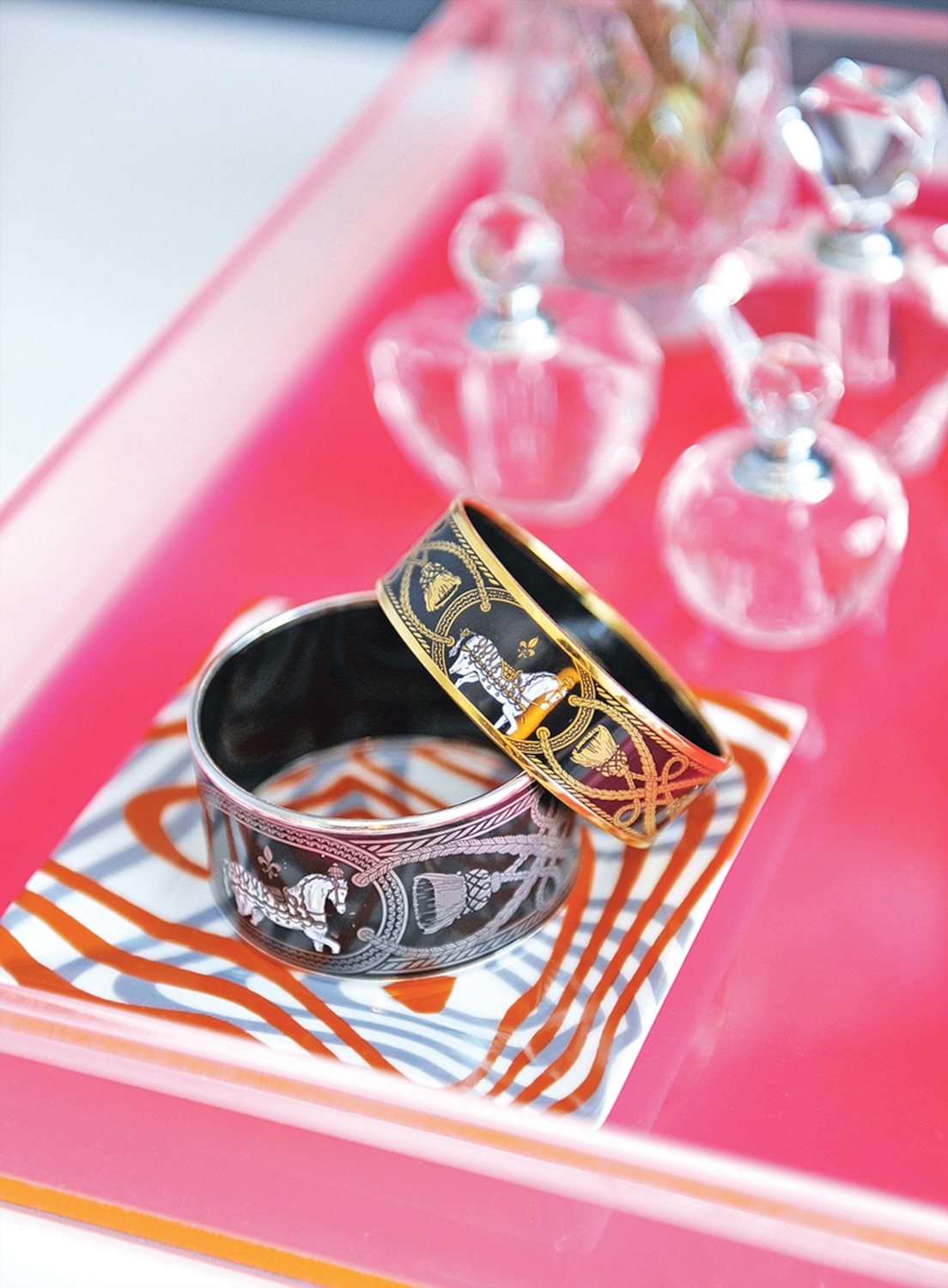 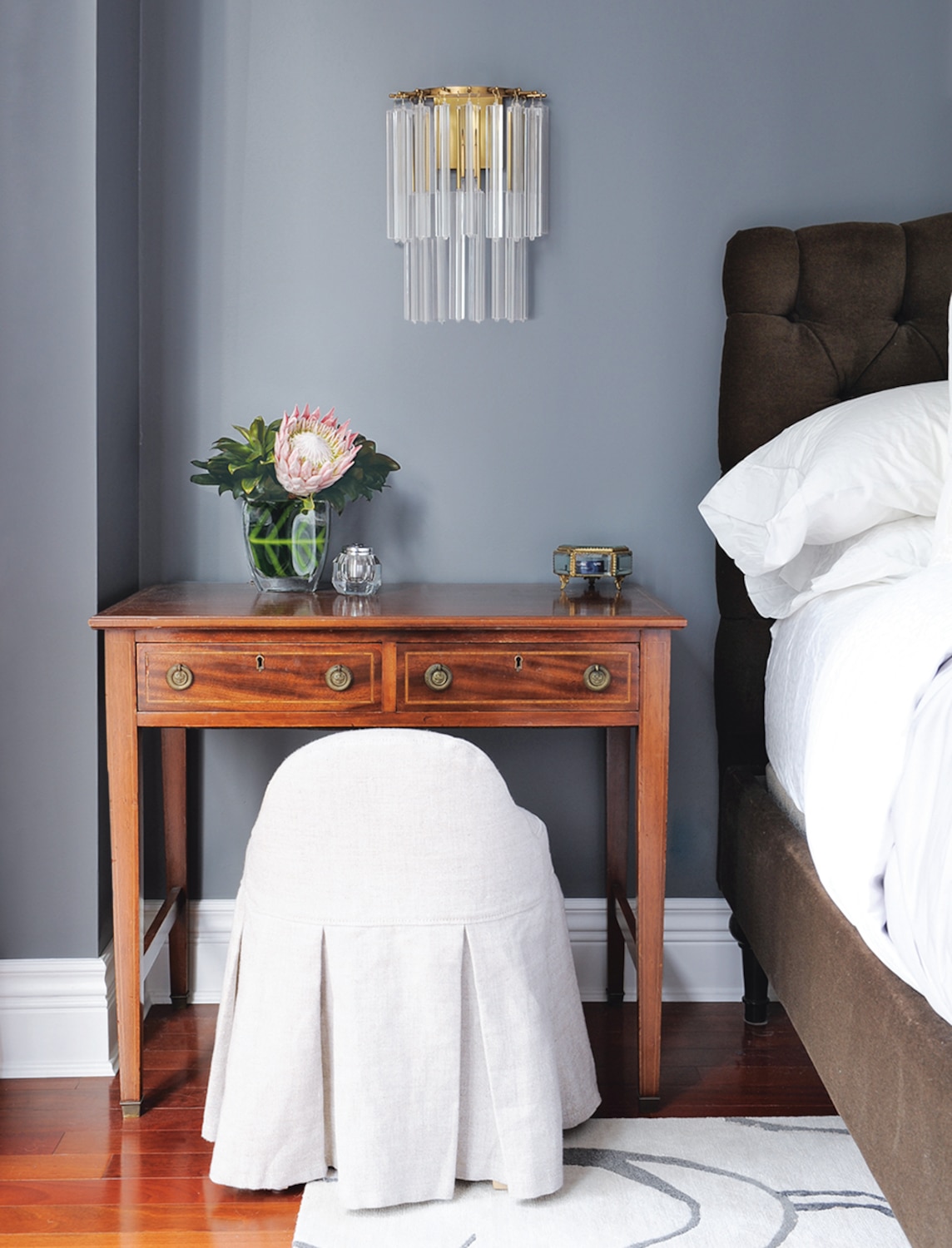