It’s easy to see why Montreal-based interior designer Scott Yetman and husband Jean Michel Lavoie named their country home Sans Souci, French for “without a care.” The house, a 1950s-era bungalow, sits on six acres in Knowlton, Que., that include an oval-shaped swimming pool, a tennis court and extensive gardens. Scott transformed the house, previously gold-coloured brick with big picture windows, into a classic structure in crisp white and black. The pair now uses it as a weekend escape from their busy city careers, as well as a place to entertain family and friends.

For the grounds, they requested the help of landscape architect Stuart Webster. “The gardens were treated the same way as the house redesign,” says Scott. “We sought out Stuart for his European architectural approach to garden design.” The plan, which landscape designer Eva Novoa helped Stuart devise, incorporated a mature cedar hedge that encloses the 1.5-acre backyard. A sweep of hydrangeas planted in front of the hedge further encloses the space and lends lushness.

The oval pool in the centre of the yard also provided much of the design direction. “The landscaping revolves around the pool,” says Stuart. “We expanded on its shape, both structurally and visually.” Curved flowerbeds and a pea gravel path mimic the roundness of the pool. Even the grass around it is mowed so that it has the same circular pattern. “We’re a bit manic about the grass!” says Scott.

In another corner of the yard, Stuart designed a potager for growing vegetables and herbs, as well as flowers for cutting. And off the back of the house, a large covered terrace boasts a commanding view of it all and offers a prime spot for relaxing and entertaining. Sans souci indeed! 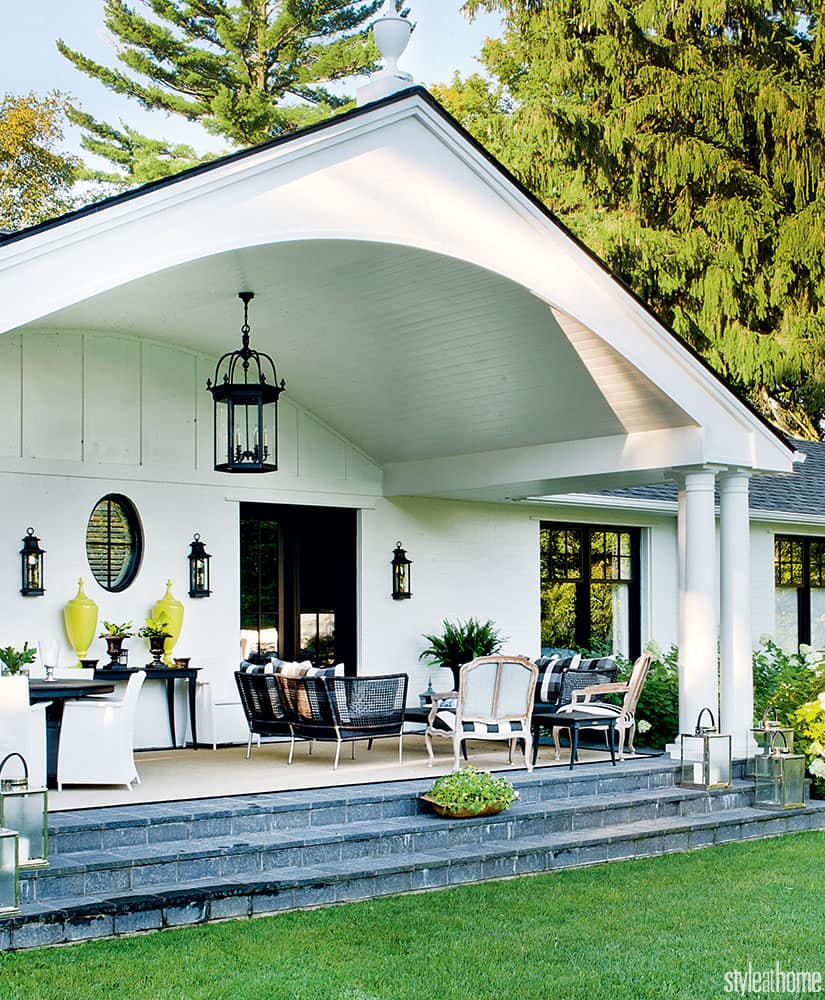 The house's crisp white and black colour scheme is carried out into the garden with its primarily white and green palette. 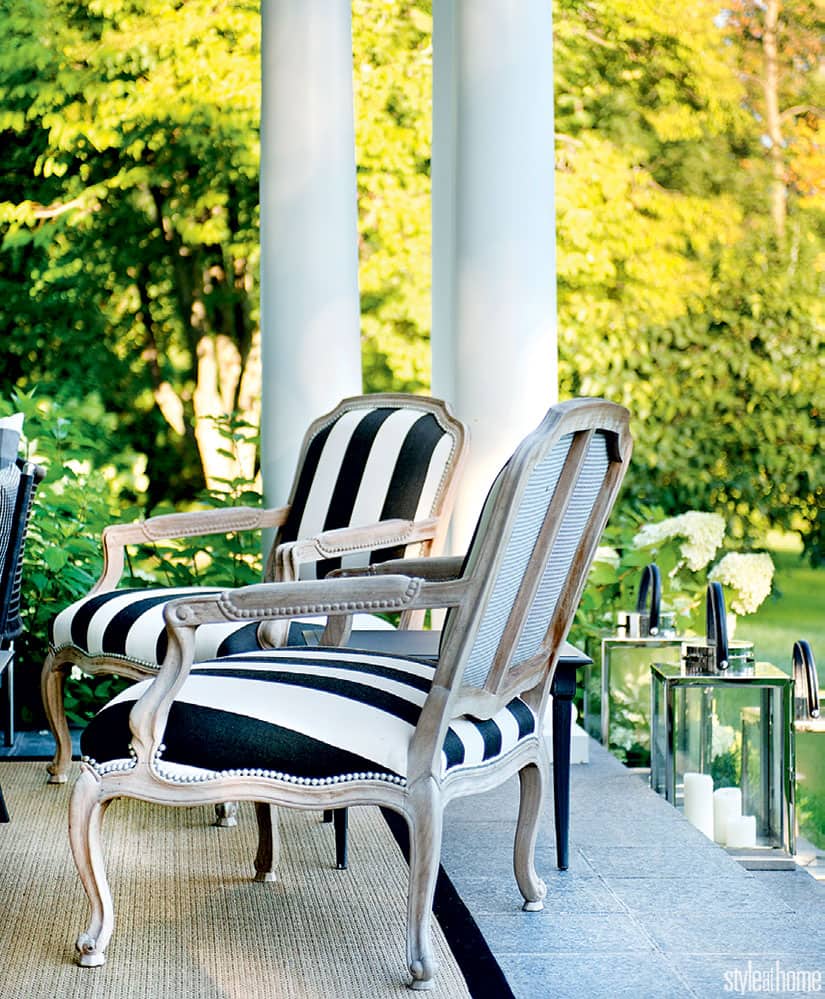 Bold black and white striped Louis XV-style chairs are a comfortable spot for relaxing on the terrace. 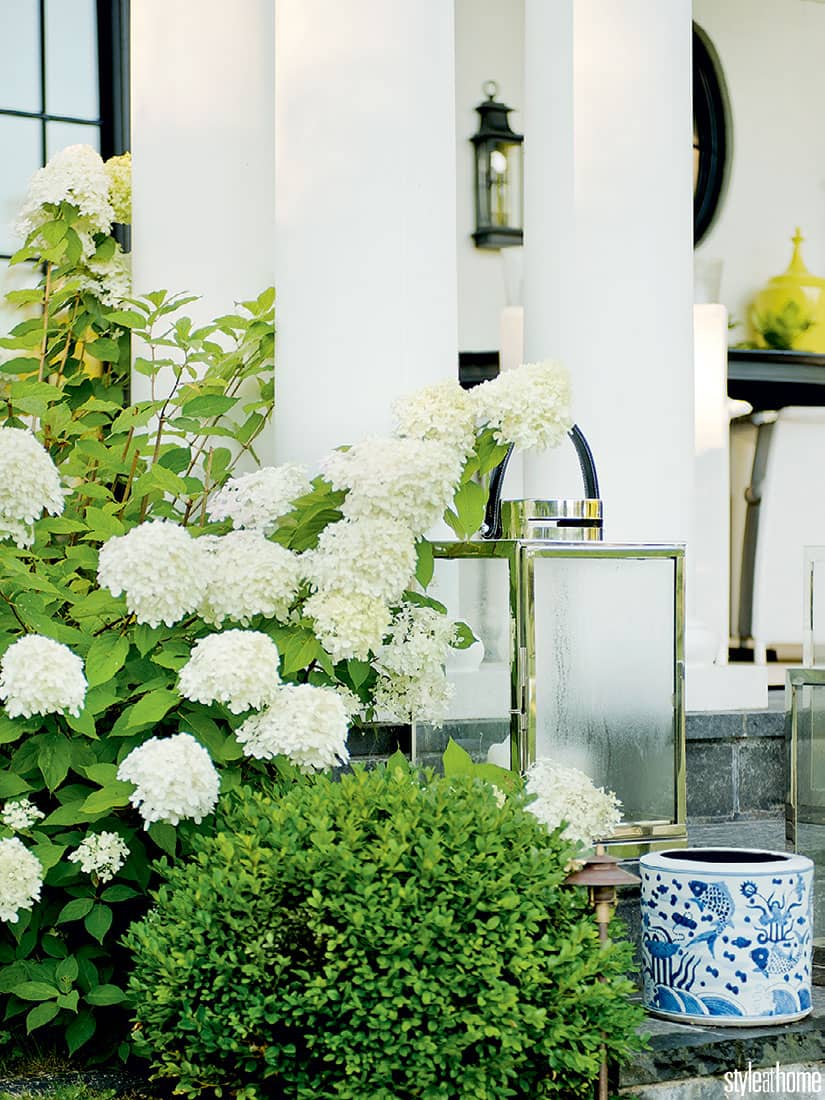 The wide steps from the terrace are lined with outdoor lanterns and planters. 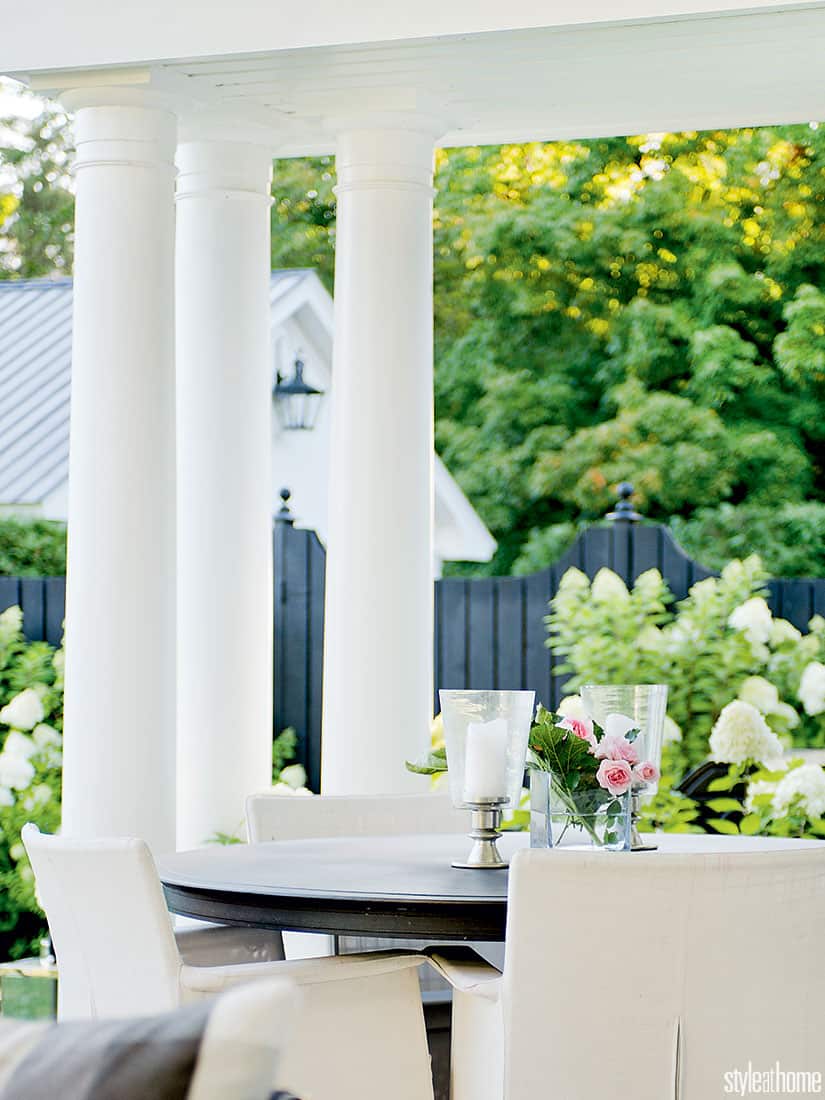 Alfresco meals are among the couple's favourite things about weekends in the country. 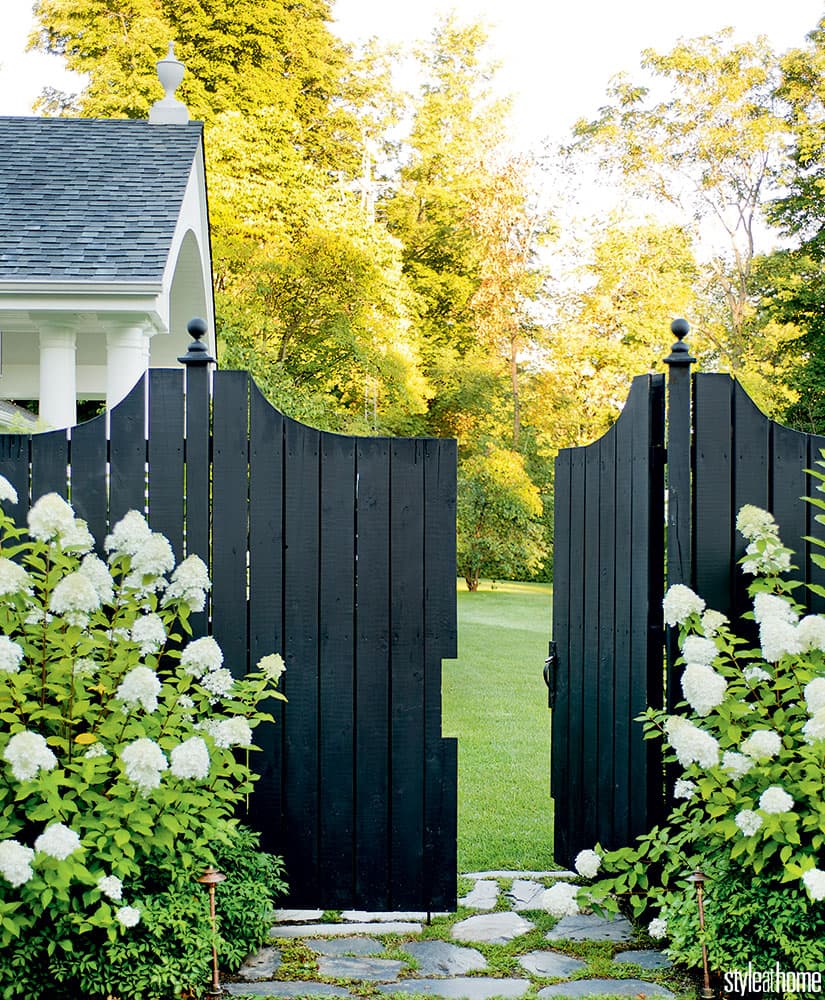 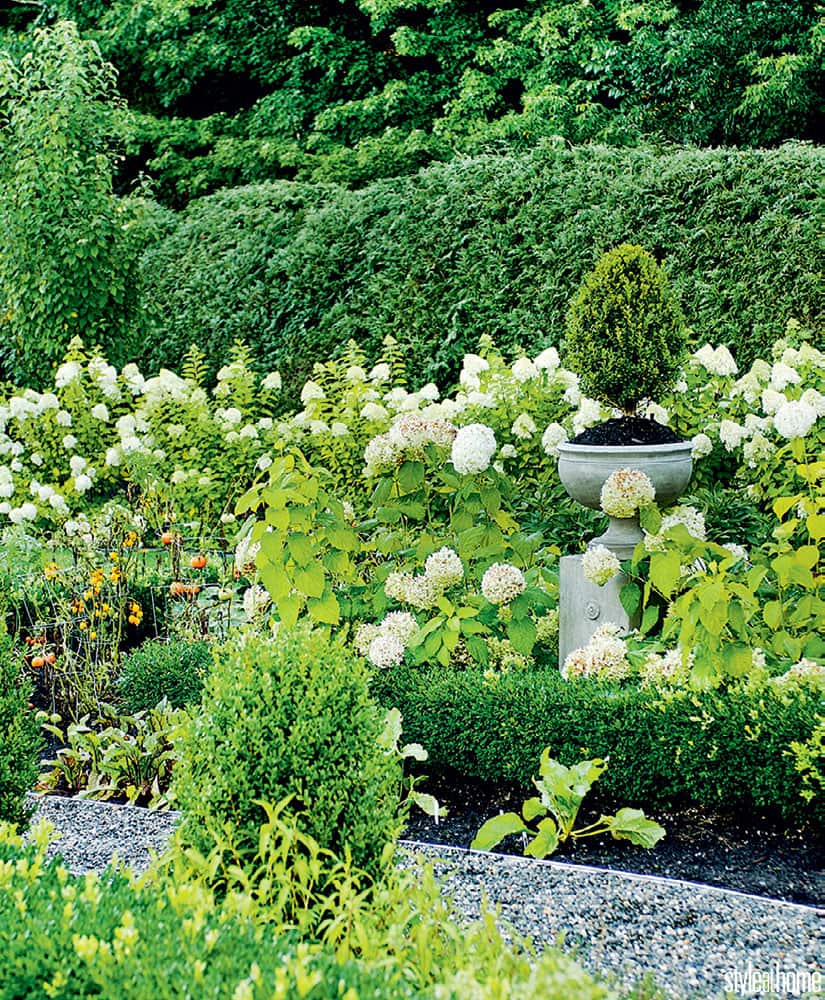 A low boxwood hedge provides the structural framework of the potager, with a pea gravel path offering access to the different beds. 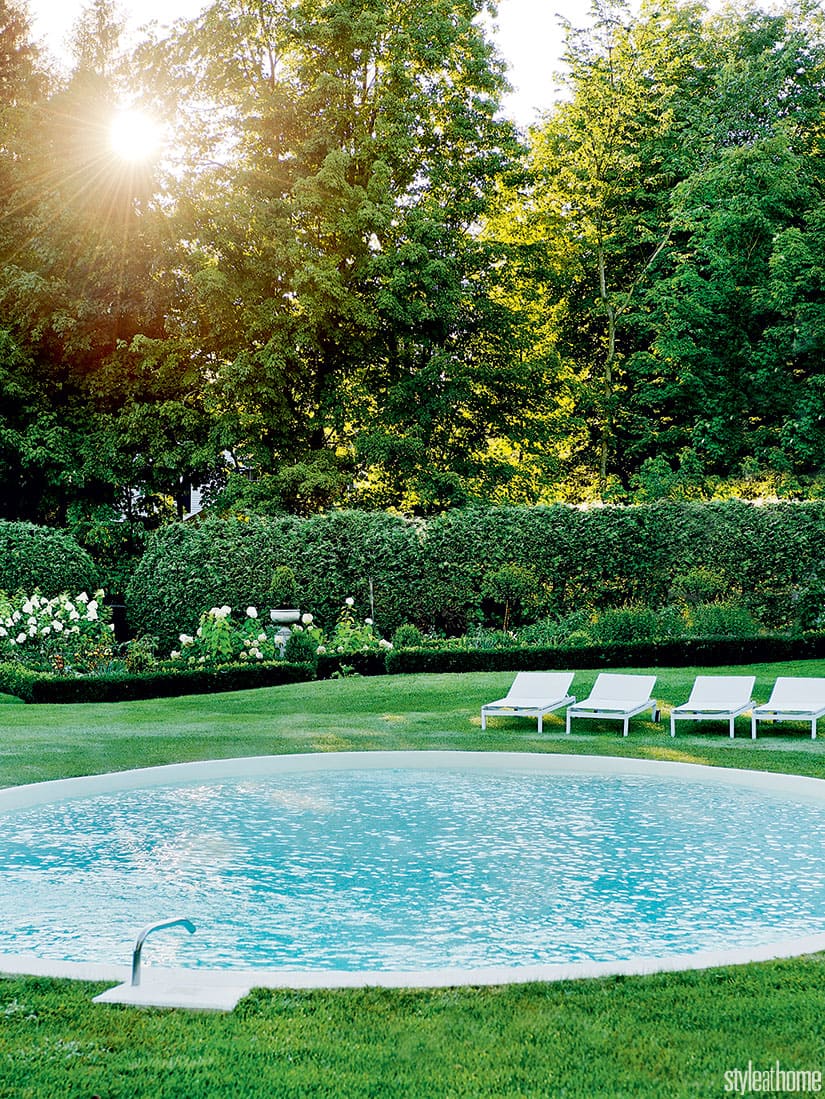 The existing oval pool was left as-is; the only alteration was to remove some concrete paving from around it. Now the grass comes almost to its edge. "It has more of a Hamptons look this way," says Scott. 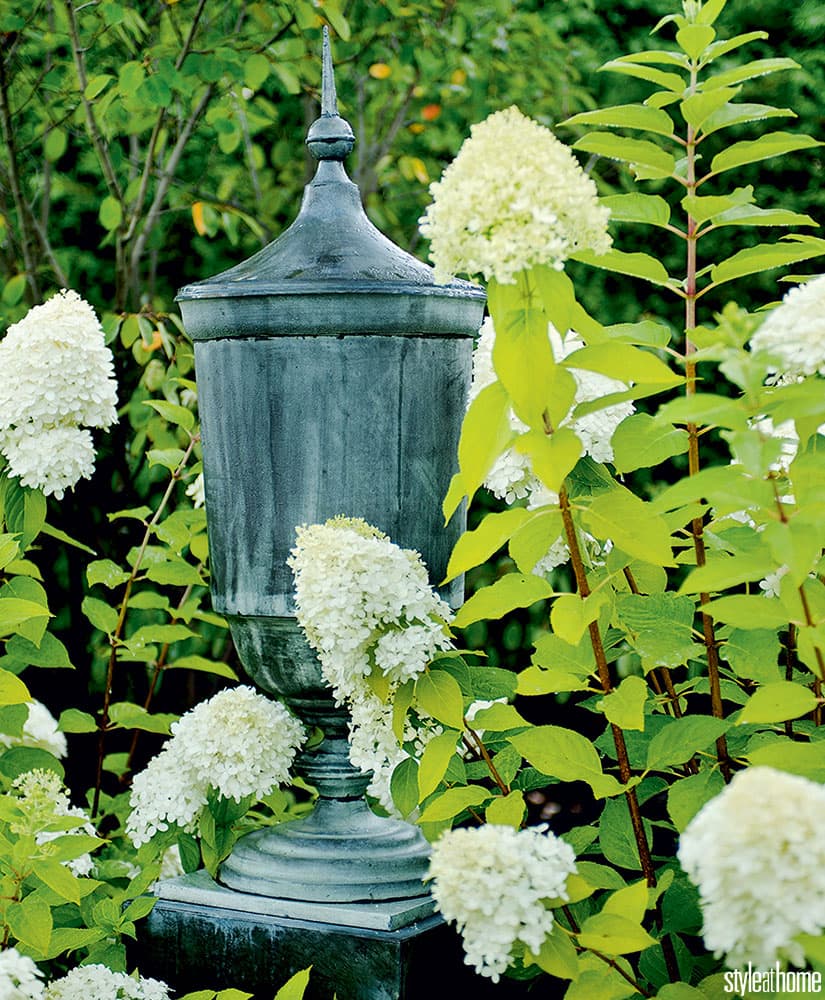 Hydrangeas, with their robust white blooms, surround the entire house.