This grand Oshawa, Ontario backyard is transformed into a Hamptons-chic retreat with plenty of French flair.

Only a few months after tackling a major home renovation of their Oshawa, Ont., house (featured in Style at Home's October 2013 issue), Miles and Sano Goacher turned their attention to the underutilized 150-by-50-foot backyard. An awkwardly placed pool was in need of major repair, and there was no deck or patio. "We basically bulldozed the whole thing and started fresh," says Miles. The old pool was filled in, and a long, rectangular one was built in a different spot to create a more symmetrical layout. Concrete pavers that have the look and feel of natural limestone surround it and lead to the new spacious patio, which is used for dining. To provide a buffer between the yard and the forest beyond, a raised rock garden was installed; the towering woodland backdrop offers all the privacy and shade required.

Trips to the Hamptons and Paris inspired the overall formal design, which includes a chic little pool house that acts as a retreat from the everyday. The French-inspired structure has double doors that swing in to reveal a plush bench covered in toss cushions and shelves filled with favourite books and magazines. Despite its peaceful presence, the backyard sees lots of action when the couple's grandchildren come over -- which is frequently, since they live only three doors down. For special occasion parties, they host larger soirees out here and create extra seating by placing cushions on the rocks.

"We wanted the casual, full appearance of an English-style garden, but in a simple, monochromatic palette," Miles explains. "We find that to be the most restful." 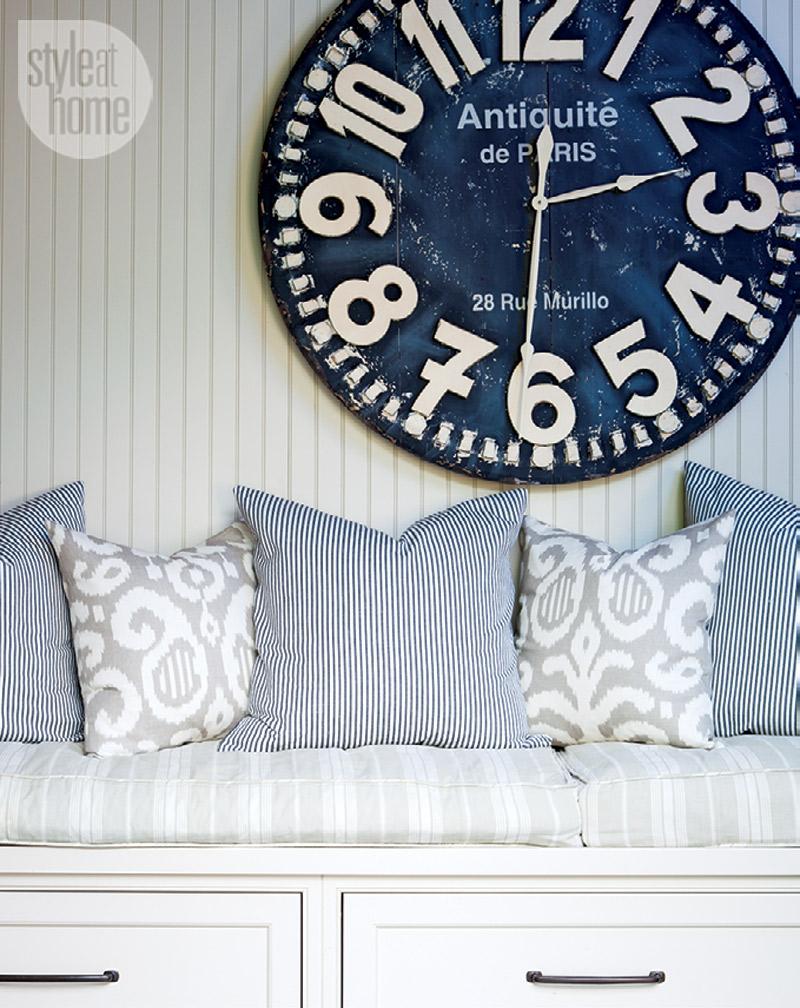 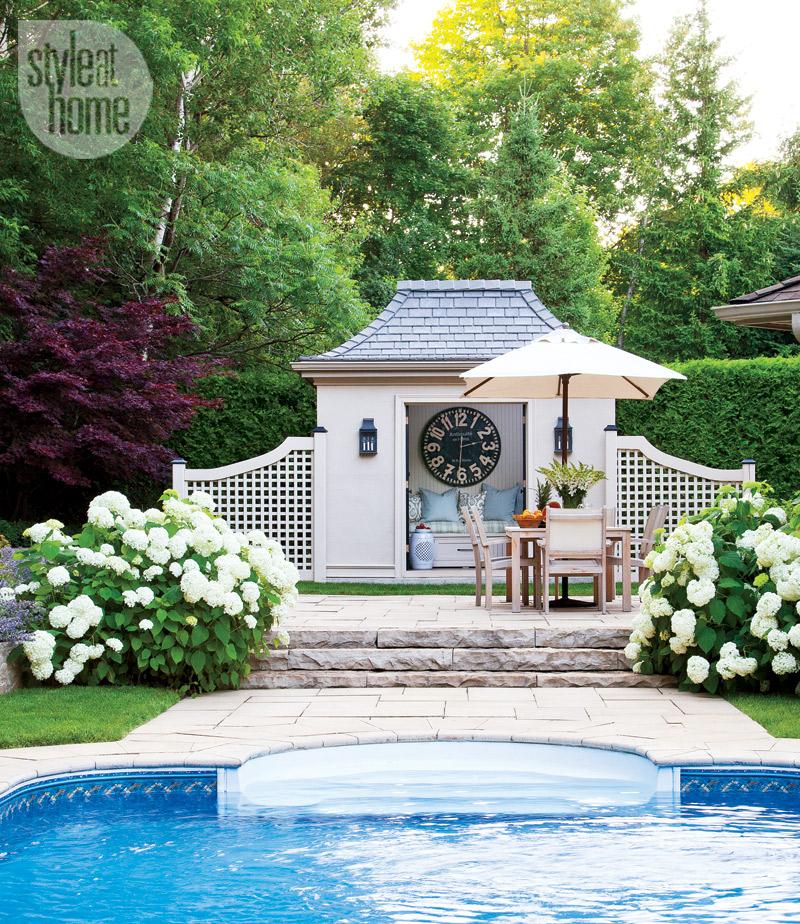 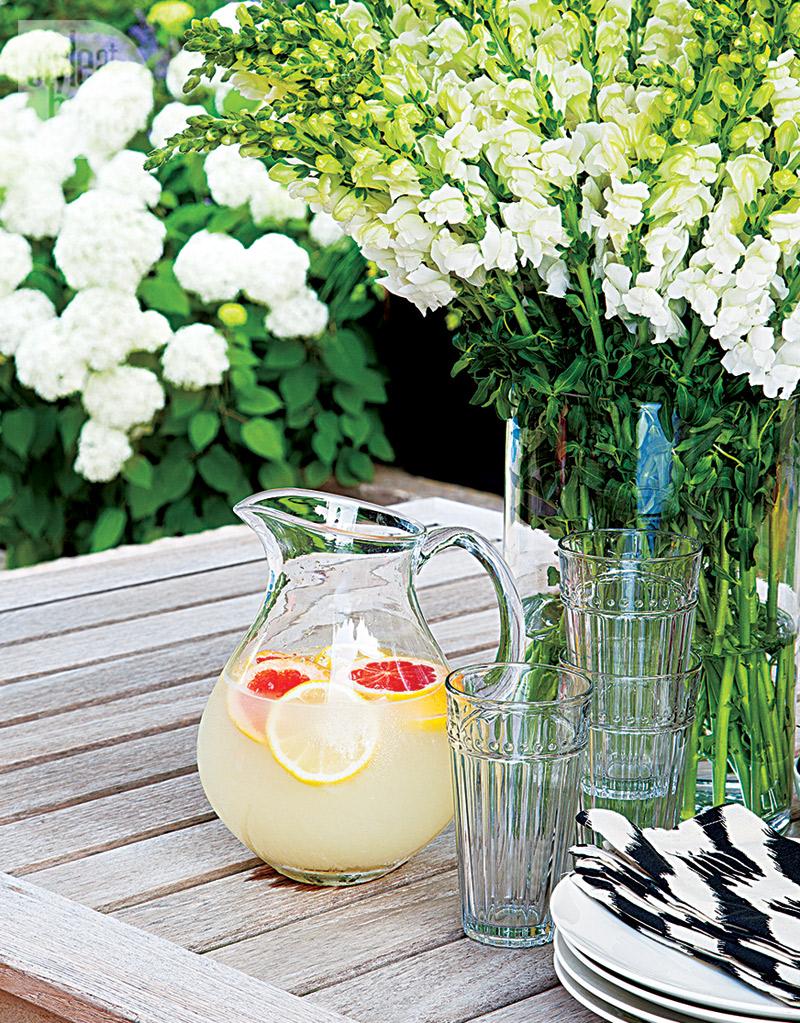 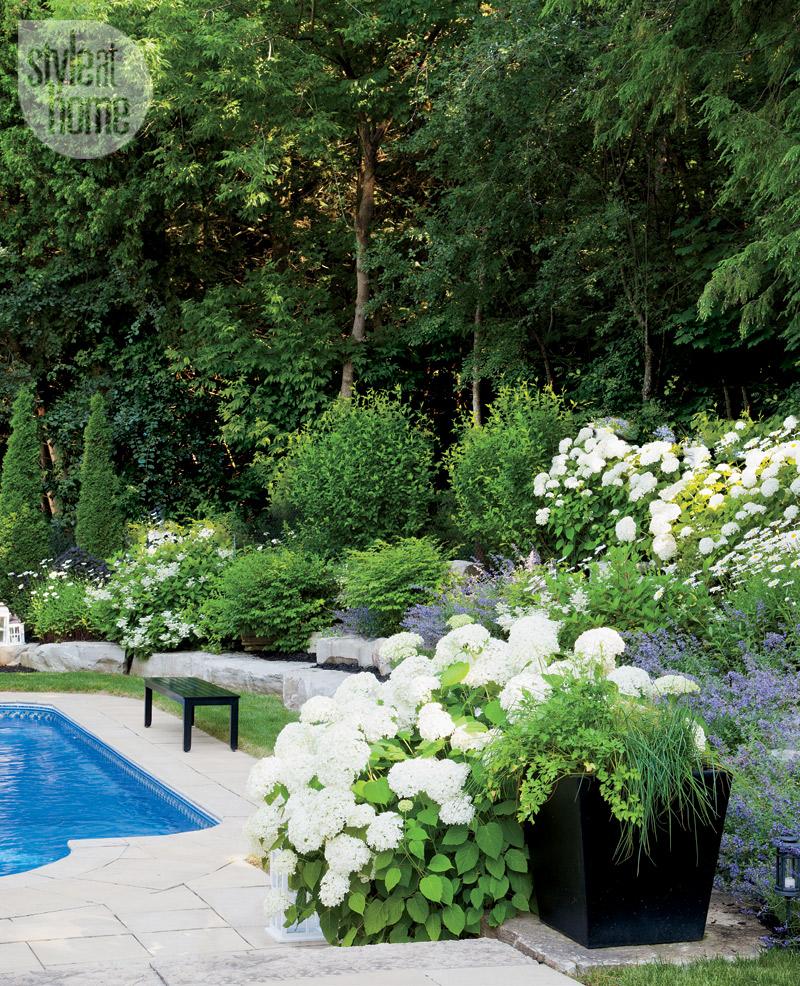 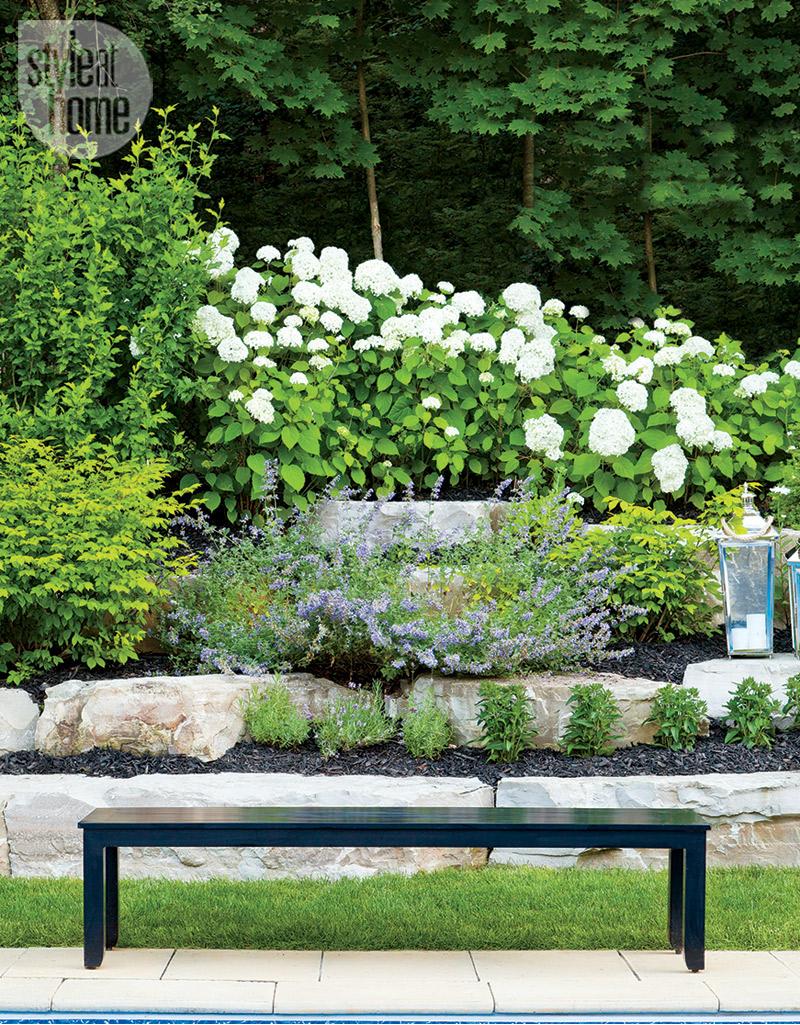 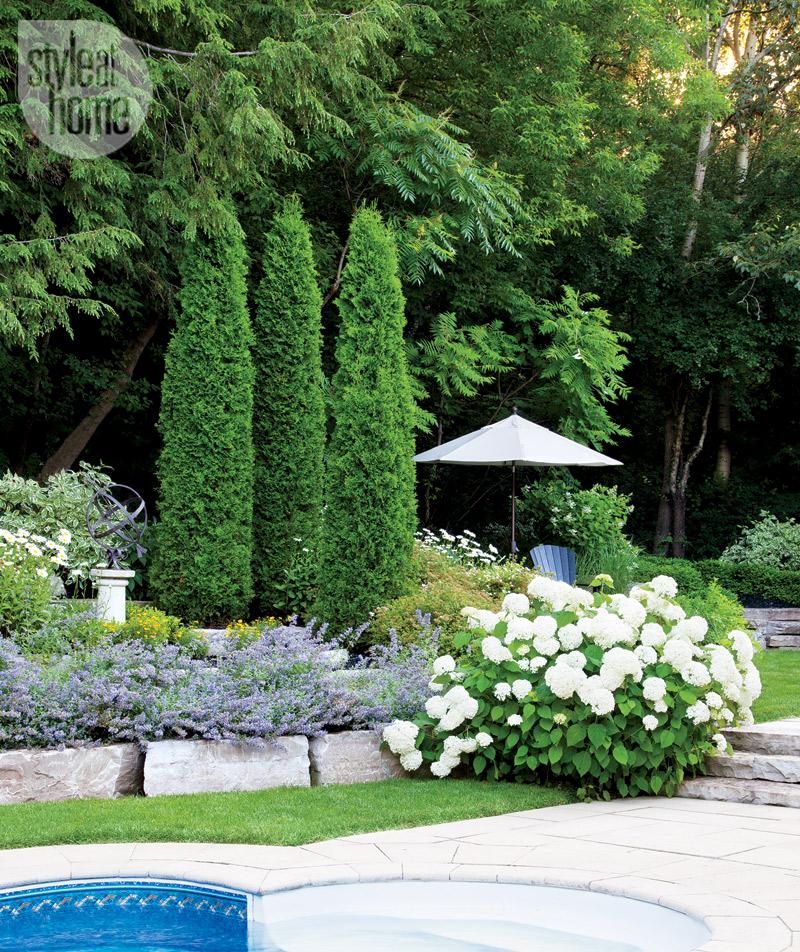 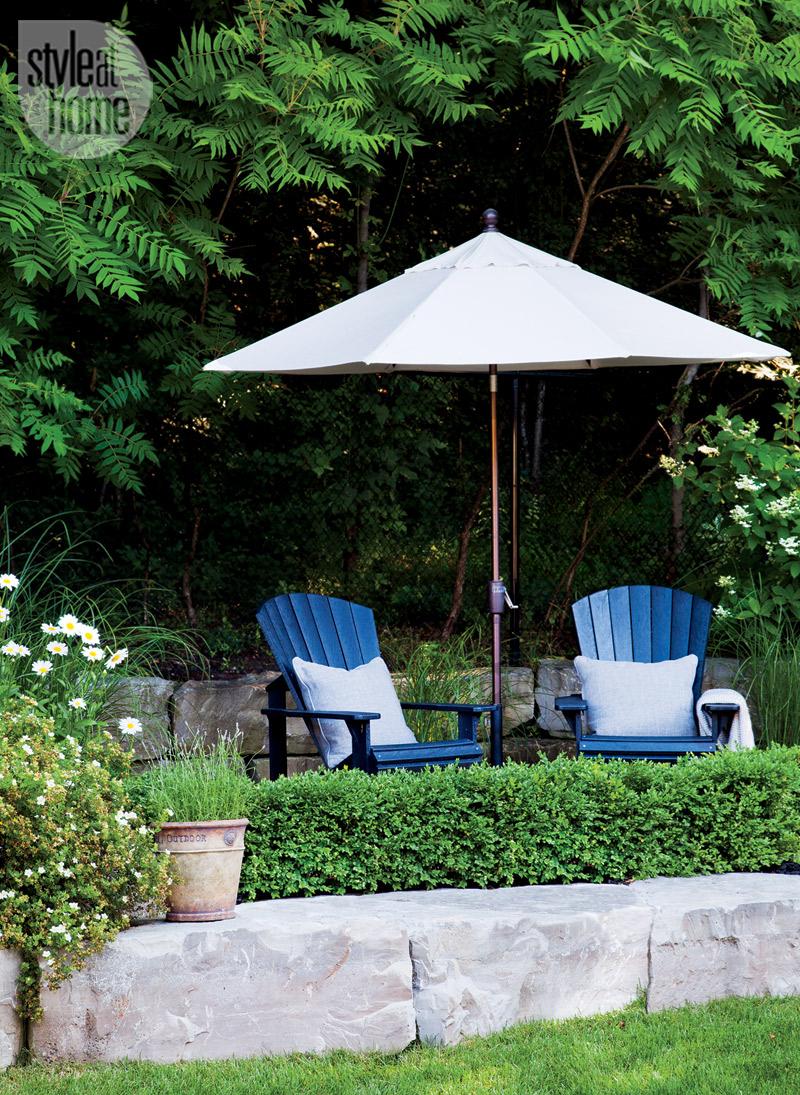 A bench in the pool house is extra deep to allow for naps. Drawers below hold towels and pool toys.

Homeowners Miles and Sano Goacher rejigged the layout of their backyard to make it more functional. In addition to having the pool moved and a new patio installed, the couple incorporated a stylish pool house. Creating the structure was a team effort, with Sano's decorator friend Mardi Mink helping with the design, and all the building done by Miles and his friend craftsman Dave Manser.

A vase filled with snapdragons, a pitcher of lemonade and black and white ikat napkins are in keeping with the colour scheme of the backyard.

In the raised rock garden, a profusion of lavender offers colour and scent, while daisies attract beneficial insects.

A raised flowerbed edged with large rocks creates a seamless transition from garden to forest. Amidst the fresh, airy wonder is a sleek black bench to sit and smell the flowers.

Hydrangeas, daisies, lavender and boxwood fill in the beds between the rocks. The abundance of hydrangeas gives the scene a distinct Hamptons-inspired feel, while the conical cedars emulate the cypress trees seen in the south of France.

A raised spot in a corner of the outdoor garden is the perfect perch for surveying the yard and pool on a hot day. A boxwood hedge separates it from the lawn below.