Share
Share
Losing a bidding war is a setback for any potential homeowner. But for Toronto couple Kurt Budnick, an account director at a design firm, and Tom Henriksson, a graphic designer, it was the conduit to their eventual dream home. “We were devastated when we lost the bid, because the house was in Cabbagetown, our preferred neighbourhood, and unlike anything we’d seen – an 1800s exterior with a modern interior and garden,” says Kurt. But if they couldn’t get the house, they vowed to get the look: “We wrote the owners and asked for the contact info of their architect, Monica Kuhn. We told her once we found a place, we wanted her to transform it,” says Kurt.

Less than a year later, they bought a three-storey, semi-detached Victorian in the same neighbourhood and enlisted Monica to give it a modern makeover that would continue into the backyard. “The garden in the other house they loved so much was enclosed and private,” says Monica, “but it acted as another room with distinct areas for enjoying a meal or lounging. Its greenery was also low maintenance, which was a must for this busy couple.” Her plan: maximize space in the 17-by-90-foot lot, increase privacy, and bring in garden designer Terry McGlade of Terry McGlade Garden Design. 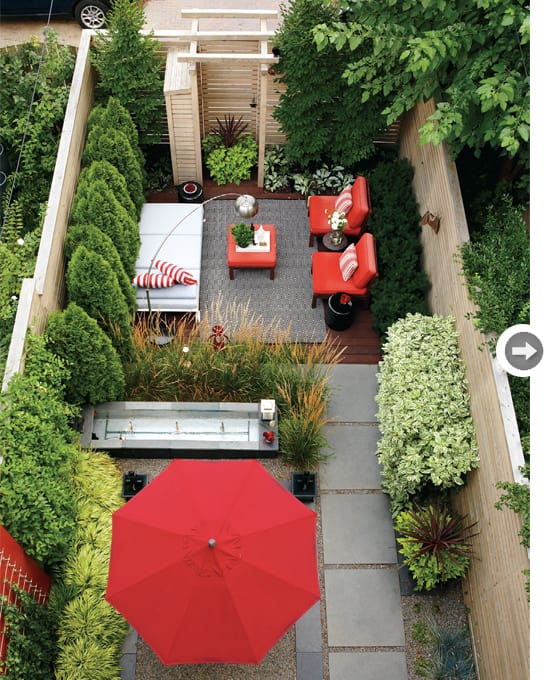 Creating spaces A view of the garden from the third floor reveals its separate areas for entertaining, along with an arbour and a small shed that stores gardening tools. 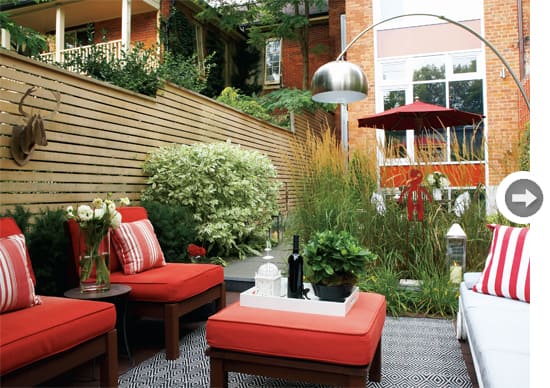 Lounge The red accented furniture and toss cushions in the seating area at the far end of the garden complement the glazed red glass panels on the back of the house. 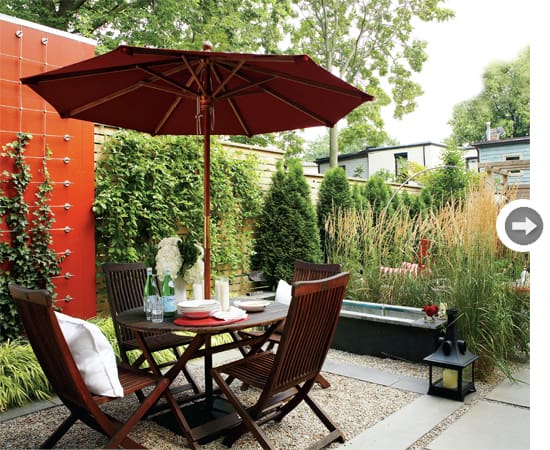 Dining At the front of this Toronto garden, a dark-stained table and chairs rest on pea gravel framed with paving stones. Just behind them, a low rectangular water feature adds a strong architectural element that’s softened by plantings of ‘Karl Foerster’ feather reed grass. All of these ingredients conspire to create an intimate spot for dining that’s subtly divided from the lower seating area.

Dividing wall “I wanted to transform the dividing wall into a living wall,” says garden designer Terry McGlade, so he planted low-maintenance ‘Thorndale’ ivy and fitted the wall with a grid of stainless-steel cables on which the ivy could climb. 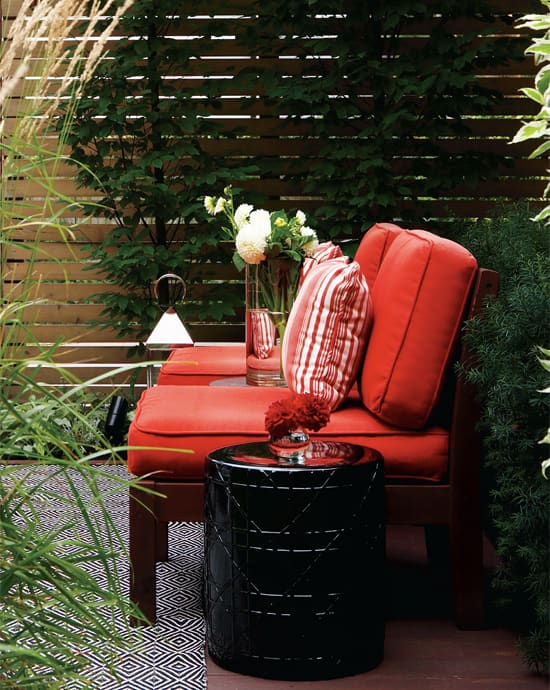 Privacy fence The far end of the garden backs onto an alleyway, so Terry extended the cedar fencing to a height of seven feet for maximum privacy.