Share
Share
Panama City is one of those cities that doesn’t sleep. Kind of like Vegas. Kind of like Miami. It’s limitless, with entertaining, dining and shopping possibilities, not to mention loads of active jaunts just outside the urban limits (think world-renowned surfing, beaches beckoning to be lounged on, and jungles that invite you to hike and trek through them). Your fist indication of all that Panama City has to offer? The massive and intense skyscrapers that you see as you land in the Central American city. This may come as surprise to many, but Panama City’s main modern area is dotted with what seems like countless skyscrapers that are just as impressive from the ground as they are from the sky – soaring into the hazy clouds. The Hard Rock Panama
In the midst of all those skyscrapers is one to take note of: The Hard Rock Panama City at 66 storeys. It’s not the highest in the city (leave that to Donald Trump and his 70-storey hotel), but it stands out with its two towers, LED lighting and a mix of white concrete with blue glass for the façade. “The sheer size of this property makes it unique amongst the Hard Rock portfolio. At 66 storeys and 1,500 guest rooms, it is the tallest Hard Rock Hotel,” says Jay Pecotte Senior Director of Project Development. “All of our properties have a certain familiar “vibe,” or attitude about them – you know when you have arrived from the music playing at the porte cochere to the decor and service of the property.” It’s not beachside, but with views of the water (including boats lined up to go through the famous Panama Canal) and views of the bright lights of the city below, it’s one of the best spots to vacation in Panama City. And if you’re a music lover, even better. You won’t be disappointed with the hotel’s impressive memorabilia collection and distinctive rock ‘n roll vibe. 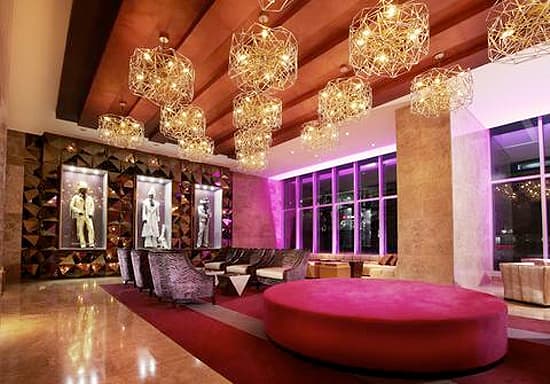 The lobby
The second you step into the Hard Rock Panama, you’ll definitely feel like you’ve been transported into a trippy dream, or at the very least the world of rock ‘n roll. One of the first things you’ll notice? The “Bling” wall features memorabilia from Snoop Dog, Elton John and Bootsie Collins – all of which sparkle and shine. In the centre of it all is the gift shop, the spot to not only pick up a Panama hat, but also everything and anything a music lover could want and even more bling. “Large chandeliers, made out of motorcycle chain, hang from the ceiling,” explains Jay. And the front desk area doesn’t shy away from bold, bright colours, a hefty music influence and the latest technology. “The front desk is backed with 60 inches of continuous video wall display,” explains Jay. “Across from the desk is an internally lit glass stage with Chad Smith’s (Red Hot Chili Peppers) pulsating internally lit orange drum set. Adjacent to the escalator is the wine-coloured glass wall and the Hard Rock Hotel ‘tattoo’, an art installation made of hundreds of different sized cymbals.” 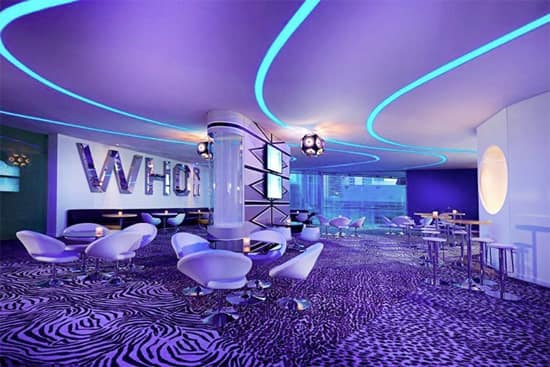 The lobby bar and lounge areas
Both are the hip places in the hotel to chill out, sip cocktails and plan a night out. And the areas range in design from 1800s to the ‘60s. “Mamie Lee’s, our second level feature bar, was inspired by the most famous American living on the Isthmus of Panama in the late 1800s and is a subtle nod to the Canal Zone bawdy past,” says Jay. “We installed a ceiling of mirrors with hanging strings of crystals as the main chandelier for the bar and used one of our rock inspired tattoo patterns for the bar dye. The bar dye is lit by an amber light and flanked by wine-coloured glass walls with colourful art of Michael Jackson and Billy Idol.”

The Who R U lounge has a definite London ‘60s feel. “It’s where Austin Powers’ shag pad meets Mick Jagger’s love lair, complete with zebra patterned carpet, ‘60s mod furniture and a disco ball tiled bar. The memorabilia and graphics are from English icons including The Who, The Rolling Stones and The Sex Pistols.” 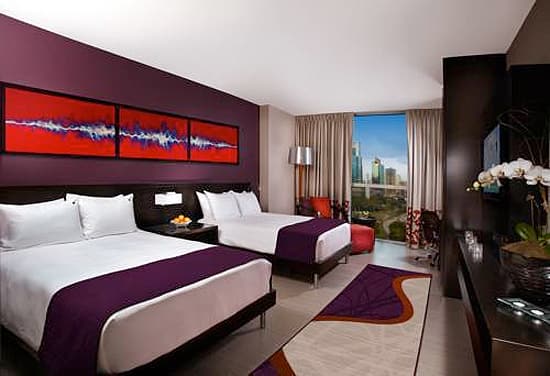 The rooms
The rooms in the Hard Rock Panama may be the best example of how you can incorporate a little bit of your love of music into your home. “The rooms are modern in decor and accoutrements, with large scale tattoo wall graphics and colourful custom rock art that was again inspired by the colours and patterns of local molas,” says Jay of the room design. “The guest rooms are outfitted with dark stained custom wood millwork, purple and orange paint highlights with rock star throne side chairs and Italian inspired light fixtures.” Each piece of artwork in the rooms feature iconic artists like Roger Daltry, U2 and Debbie Harry, along with Latin artists Mana, Juanes and Soda Stereo. “We customized images introducing vibrant colours and mola techniques to create a whole collection of customized art for the property,” he says.