Share
Share
Standing in front of the St. Pancras Renaissance London Hotel, it’s impossible not to be transported back to the glamour of an era long gone. Originally opened in 1873 as the Midland Grand Hotel, the towering historic property oozes old-world charm, greeting guests with a genuinely Gothic moodiness. Visitors are beckoned inside to explore the wide, winding hallways, designed to accommodate the full, sweeping skirts of traditional Victorian dresses, allowing two women to pass each other comfortably. Designed by Sir George Gilbert Scott, a Victorian architect whose creative genius brought many cathedrals, churches and hotels to life, the St. Pancras hotel was initially opened to welcome travellers from the adjoining St. Pancras train station. Now, 139 years later, the hotel is still hailed as one of London’s most romantic buildings and threw its doors open earlier this year, following a massive restoration project. The result is a gorgeous, grand and glamorous hotel that gives 5-star luxury a whole new meaning. 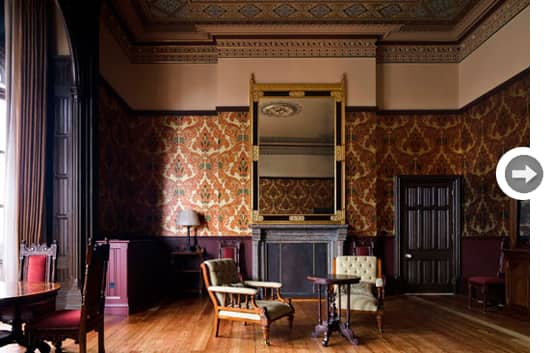 “This room was the grandest private sitting room in the original hotel,” says Harry Handelsman, owner of the hotel and CEO of Manhattan Loft Corporation. “British Rail then painted over all of the original wallpaper and ceiling design and turned the room into an office.”

Restoration didn’t come cheap. The ceiling was restored at a cost of £90,000 and Harry says it’s impossible to distinguish between the original and this. The original mirror was restored and the wallpaper was re-created – it took five people 18 months to re-produce it at a cost of £46,000 and then a further £12,000 to put on the wall.  The floorboards are also the restored originals. Dark and moody, this room is exceptionally Victorian in atmosphere, giving guests a true sense of what it felt like to be here in the late 19th century. 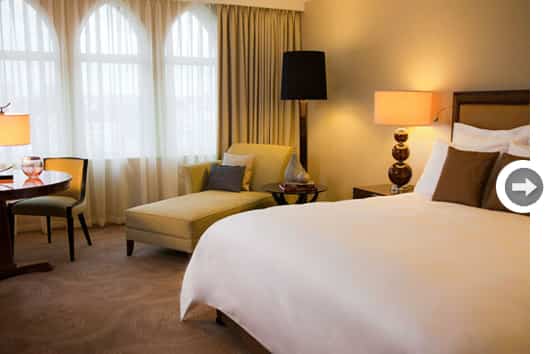 Barlow King room
Not all the rooms in the hotel are Victorian in style. Updated to reflect current tastes and trends, the Barlow King Room is more contemporary and capacious. Part of an extension of the original structure, these rooms feature large windows and a muted, modern colour palette. “Unlike in the Chambers, where the wall colourings differ from room to room, here the colours need to work seamlessly between all 207 bedrooms without making the rooms feel standard,” says Harry. “We did this by choosing some statement pieces of furniture such as the table and chair, chaise longue and light fittings, whilst keeping the colour scheme fairly soft and muted.” 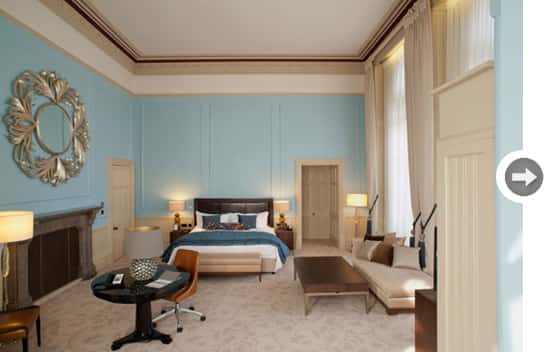 Chambers grand junior suite
“As the only bedroom with dual aspect windows, this room is hugely bright and airy,” says Harry. “This room used to be known as the Oriel Room and was the sitting room of one of the original hotel’s larger suites. Whilst the structure of the room remains untouched and the original fireplace remains, the wallpaper and ceiling haven’t been restored.  When British Rail took over the building after the original hotel closed, this room became a drawing room and British Rail painted over all of the original wallpaper and ceiling designs. The doorway at the back was originally a cupboard,” he says.

No major restoration work was done in this room. Due to the size of the space, Harry says it was important to create balance when choosing and placing furniture so as not to make the room feel too cluttered or too empty. The room boasts 18-foot ceilings so a variety of statement mirrors were designed to maximize the vertical space. The sky blue wall colour, chosen because of the amount of natural light that floods the room from the large windows, adds a softness to this space, making it sweet-dream-inducing. 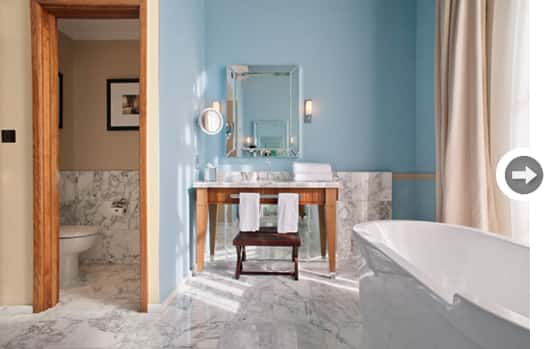 Chambers grand junior suite bathroom
The large, spacious bathroom in the Chambers Grand Junior Suite features separate areas for the WC and shower room. “The floor-to-ceiling window at one end of the bathroom perfectly frames the centrally placed freestanding bath,” says Harry. This space was designed to complement the adjacent bedroom. “This bath is unique to this bathroom as it is one of the few bathrooms large enough to hold a freestanding bath,” Harry says. “All of the bathrooms adopt the perfect balance between being contemporary enough to please the 21st century traveller, yet with enough of a traditional twist to fit with the overall feel of the building and the hotel.” Again in a sky blue palette, this bathroom mimics the design of the bedroom, giving the space a large, airy feeling and the use of marble throughout adds a healthy but not overdone touch of luxury. 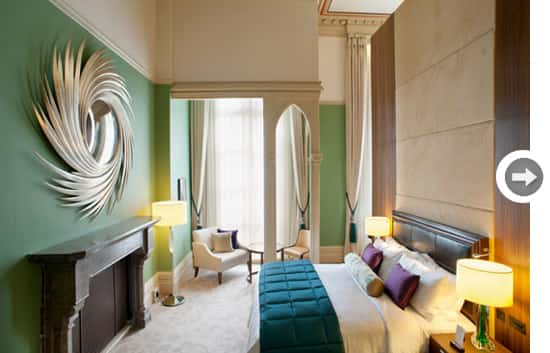 Chambers junior suite
How would you describe this room? “Contemporary grandeur,” says Harry. This room reflects a happy marriage of old and new: 18-foot high ceiling with an original fireplace and architectural detailings, complemented by more contemporary furnishings and art.

“No major restoration work has been done in this room,” says Harry. “Structurally, it is in tact and the original wallpaper and ceiling design still sits behind the paint, should we ever choose to restore it.” The design intention in this space was to complement the original architecture of the building, while still offering guests a contemporary, luxury feel. “The colour palette strikes the perfect balance between warm and endearing, without losing the extraordinary height of the room,” says Harry. “The green on the walls is one of the 12 prescribed paints by English Heritage, which suits this room perfectly due to its size and architectural detailing.” 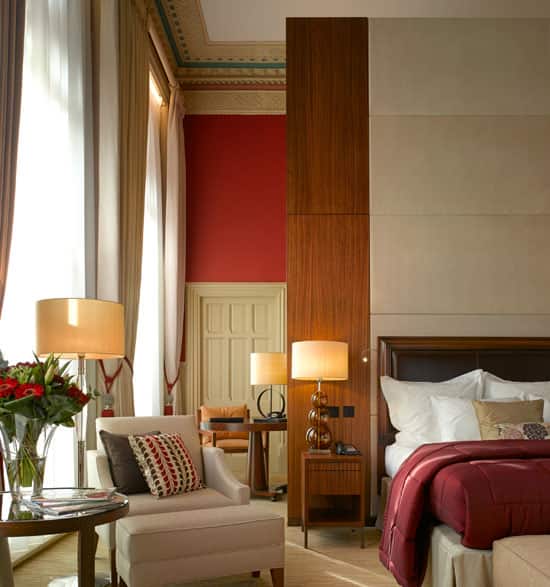 Chambers junior suite
The Chambers Junior Suite is one of only a handful of rooms that has unique views straight out into St. Pancras International Station. Thus, with two large, floor-to-ceiling windows, the central focus of this room is its views, Harry says. “This room was originally two separate rooms: a room to the right was much bigger and was a private billiard room and a smaller room to the left was a bathroom,” he says. “The most significant change therefore is the merging of the two rooms into one bedroom and the introduction of the bathroom pod.”

Because of their location in the building, these rooms have less natural light streaming through them, so a pale palette was used to capitalize on the daylight, making them feel brighter. The cream coloured walls and other pale accessories and furnishings, lend this space a soft and tranquil feeling of serenity.