About every three years, IKEA throws off the shackles of its bargain-priced principles in the name of unrestrained design. The result? The PS Collection—the Swedish design powerhouse's opportunity to make a real style statement—comprising 44 new fabulously forward-looking products for the home, is hitting select IKEA stores in Canada in August 2009. German designer Wiebke Braasch, an in-house designer at IKEA since 2004, crafted one of the icons in this innovative rash of releases—the pretty Väva pendant lamp (which can be seen on the next page)—and provided some illumination herself on the process behind PS.

style at home: How does designing for the PS Collection differ from your normal duties for IKEA?
wiebke braasch: The PS Collection is a chance to work outside the box a little bit—more experimentally, with more time and freedom to come up with the unexpected! With the Väva pendant light, I wanted to create a piece that showcased the amazing potential of woven palm leaves. I had the opportunity to go to Vietnam recently, where I worked with people who have mastered palm leaf weaving, and I developed so much respect for their craft. A dried sea urchin from my childhood inspired the shape of the shade, and the contrast between the discus-shape body and the spiky weave highlights this very beautiful technique. Everybody just wants to touch it!

S@H: In terms of placement, where can you see the Väva pendant being used to the greatest effect in a home?
WB: They're beautiful above a dining table, hung in multiples. The pendants cast a cosy, warm glow that's so perfect for dining—even more effective if you pair them with a dimmer switch. And they’re just as beautiful turned off as they are on: during the day, they take on the appearance of hanging sculptures.

S@H: This PS Collection has a genuinely Swedish feel to it—stunning yet spare. Being German yourself, was it a challenge to adopt that signature Swedish aesthetic?
WB: It was quite easy! I’ve always been influenced by and attracted to the Swedish culture and design process, and sometimes I think it's an advantage that I can see their style with fresh eyes. It's almost helpful being from Germany—as an "outsider" I can see the whole picture! 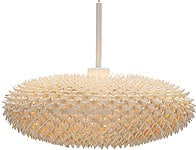 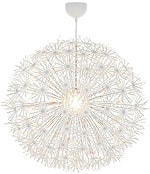 Already the bestseller of the collection in Europe (where the PS Collection was launched in February 2009), designer Marcus Arvonen’s IKEA PS Maskros pendant lamp ($100) captures that fleeting moment of time before a dandelion is scattered to the breeze. The light throws intricate wallpaper-like shadows on surrounding walls, adding instant interest to a white room.

A little bit country, a little bit rock ’n’ roll! Designer Nike Karlsson’s striking juxtaposition of solid pine and white leather makes this daybed/bench equally at home in a cottage hallway or the living room of a mansion.

Designer Kazuyo Nomura takes the evolution of sheer fabric down a poetic path. “The sunlight shining through big spider webs is a common yet beautiful and enchanting sight in Swedish forests,” she says of her delicate cat’s cradle.