A once dark and windowless bathroom is washed away in favour of a luxury ensuite lathered up with lots of marble, natural light and a beloved bathtub.

The impetus for this undeniably elegant master bathroom, reminiscent of a luxurious European hotel suite, was more humble than you might think. “I just wanted a bathtub,” says homeowner Dayna Arron.

When Dayna and her husband, Jonathan Behar, moved into their Toronto home nine years ago, they focused on redesigning the main living areas to suit the needs of their young family. When it finally came time to redo one of the couple’s spaces, Dayna pulled out all the stops, starting with hiring designers Ingrid Oomen and Vanessa Kwan of Qummunicate.

The first thing Ingrid and Vanessa did was rejig the floor plan. “The bedroom had a small ensuite and a large walk-in closet that had more space than the couple needed,” says Ingrid. So the bathroom became the closet, and the walk-in became the 11-by-11-foot setting for a dream bath – a smart, splurge-worthy switch. “Moving the plumbing and adding the window were expensive endeavours,” Dayna admits, “but the room needed natural light.”

That light now bathes a classically inspired space enlivened by judiciously chosen contemporary elements. “I’m drawn to the juxtaposition of old and new,” says Ingrid. “While the floor tiles and the wall panelling are traditional, the pendant light and sculptural bathtub are sharply modern.” It’s a mix Dayna also loves. “The classic features are balanced with a slight edginess that gives the room energy,” she says. “In fact, the contemporary pendant light in front of the window is almost as compelling as the tub. Almost.” 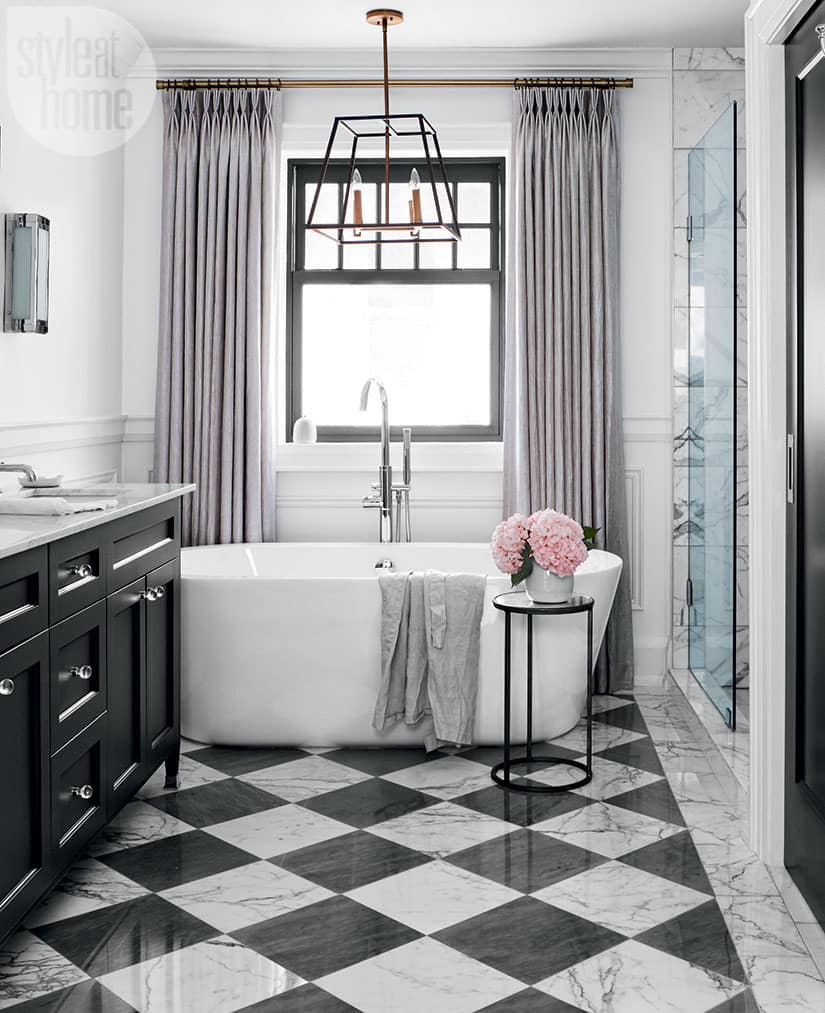 An unexpected element in a bathroom, drapery lends form and function. “It adds warmth and draws the eye upward, making the ceiling appear higher,” says designer Ingrid Oomen. “And having a space behind the free-standing tub means the drapery is out of the way of any overtly wet areas.” 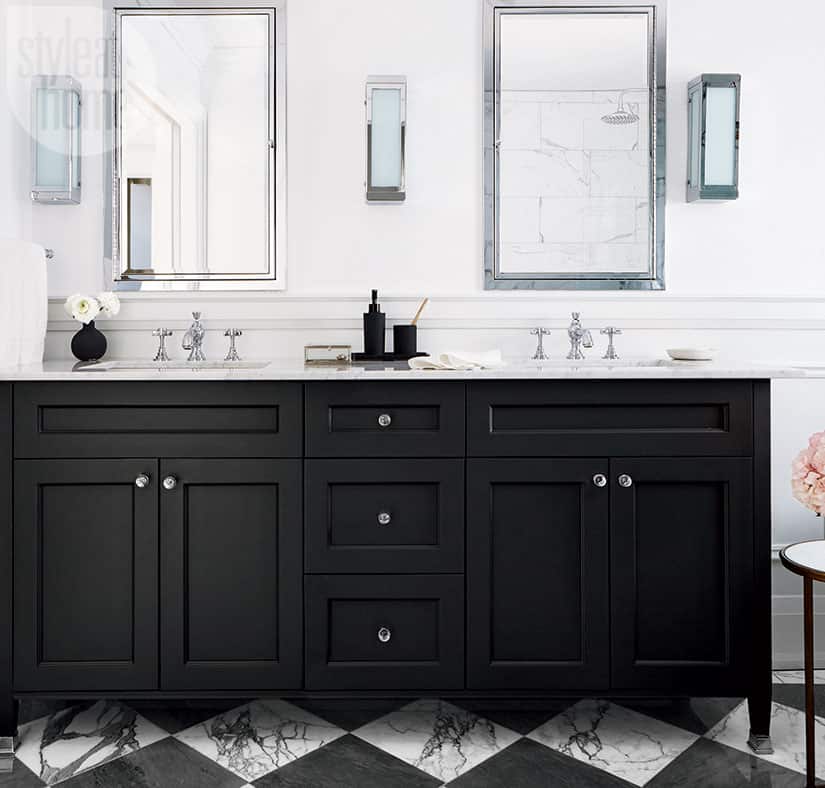 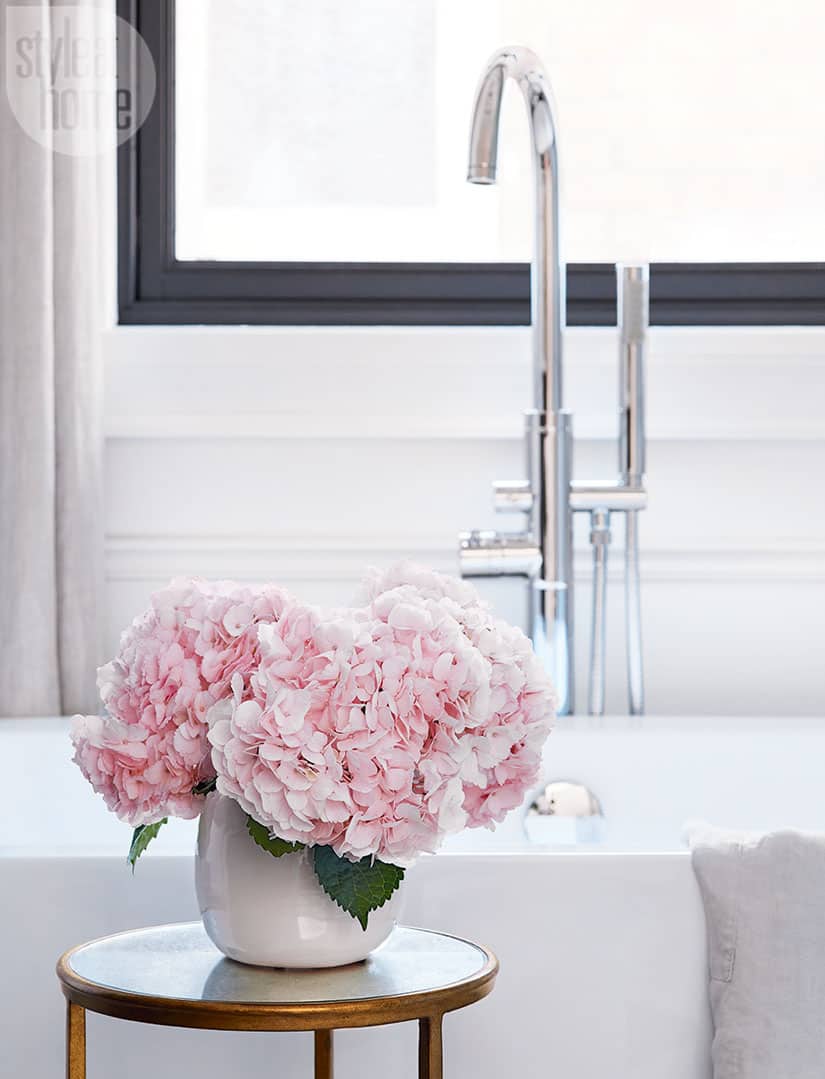 “Since this is a shared ensuite, I used a dark grey vanity to introduce a masculine element,” says Ingrid. “It ties in with the checkerboard floor tiles.” She balances this effect with a feminine finishing touch of sparkly crystal knobs. Chrome sconces are positioned at eye level – never higher, says Ingrid – for soft, flattering light. 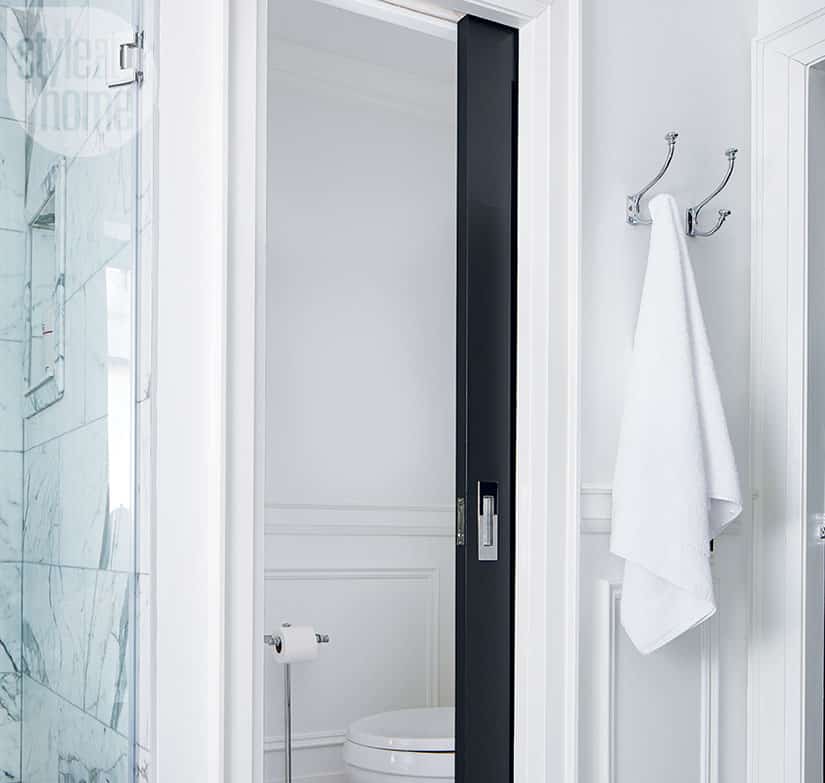 The wainscotting throughout the ensuite has traditional appeal, protects the walls from damage and is an alternative to using more tile. Ingrid likes to incorporate a water closet in a shared bathroom. “This one has a subtle pocket door for privacy, and the separate enclosure keeps the toilet out of sight.” 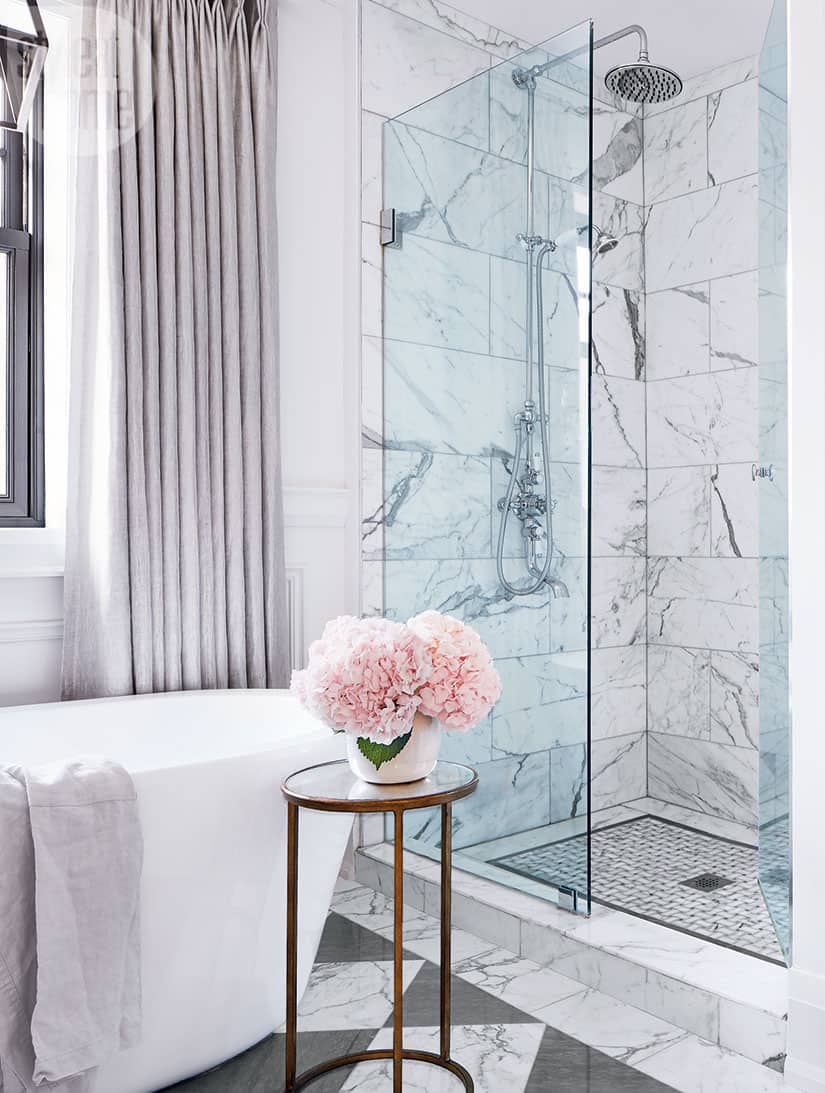 The table beside the tub incorporates one of homeowner Dayna Arron’s favourite materials. “She’s a fan of brass, and we both like how it adds a touch of warmth to the ensuite,” says Ingrid. “I repeated the metal in the drapery hardware. It plays nicely off the chrome fixtures, which feel clean and sparkly. It’s a great mix of metals.” The basket-weave mosaic tiles on the shower floor echo the colour scheme of the larger tiles and subtly layer in texture and detail.