This radiant living room is layered with fresh prints reminiscent of the beach.

Much like people, houses have personalities. Some homes – let’s call them the introverts – conjure up cool elegance. Others are like peacocks: a bold bunch of extroverts boasting pattern and colour. The latter describes this 2,400-square-foot four-bedroom Victorian semi in Toronto’s Summerhill neighbourhood. Designed by Robyn Rider of Robyn Madeline Interiors, the cheery home – with its eye-catching prints in blue and white and fresh coral and green accents – takes its cues from Palm Beach, Fla., which is meaningful to the young family of three living here. “We’ve been visiting Palm Beach for the last 15 years,” says one of the homeowners. Not just bold and bright, the design has all the hallmarks of that eclectic coastal style, from the crisp white walls to the mix of natural materials, such as linen and bamboo, as well as quirky touches like the artichoke lamp and chinoiserie plant pots.

It’s exactly what the homeowners wanted. They first spotted Robyn’s work on Instagram and immediately connected with her style, exemplified in her gallery of lively rooms filled with florals, stripes and Greek key motifs that delightfully pop against neutral backdrops. “Robyn’s tastes are very similar to ours,” says the husband, who admits he prefers a brighter palette than his wife does – “I know, it’s opposite of the norm,” he adds with a laugh. But luckily, she didn’t need much convincing, and the couple called on the designer to start as soon as possible.

When Robyn arrived on the scene, the architect and contractor had already removed a structural wall that had split the back of the house into two skinny, awkward rooms. The new layout allowed for an open-flow kitchen with an eat-in area, a petite powder room and a comfy family room (not shown). The wall that divides the back of the house from the front (with its living room and entryway) stayed intact, and the kitchen’s added Dutch door, painted a snappy navy blue, connects the two areas. 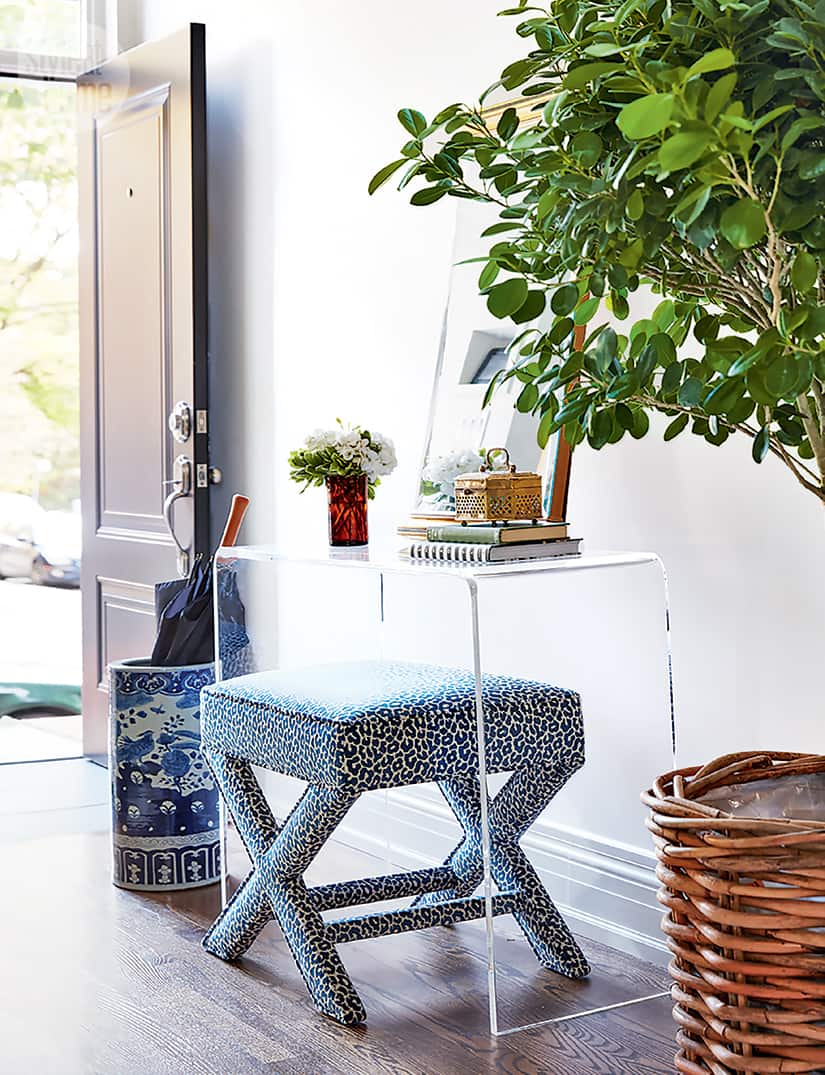 Such separation is surprising, considering the trend is to leave no wall standing, keeping a communal space as open as possible. But this family needed function, says Robyn. The homeowners requested the Dutch door (split horizontally, so the top half can open while the bottom stays fixed) to keep their one-year-old daughter contained. “It’s much nicer than an unsightly baby gate,” says Robyn. 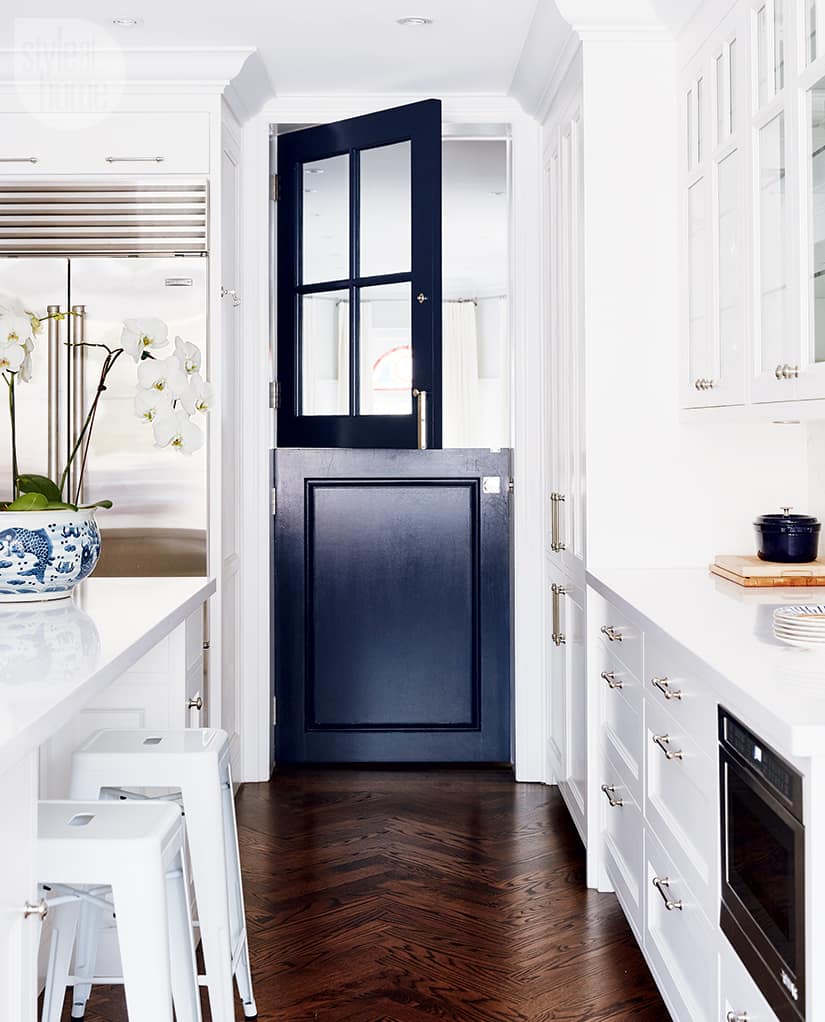 This division also allows the house to have two moods: more formal in the front (think eclectic parlour) and relaxed and kid-friendly at the back (from the eat-in area’s hard-wearing 12-foot-long banquette to the slipcovered sofa in the family room). What joins the two spaces, though, is the joyful palette. “It’s the first thing you notice when you walk in the house,” says Robyn, referring to the living room and its floral-patterned armchairs. 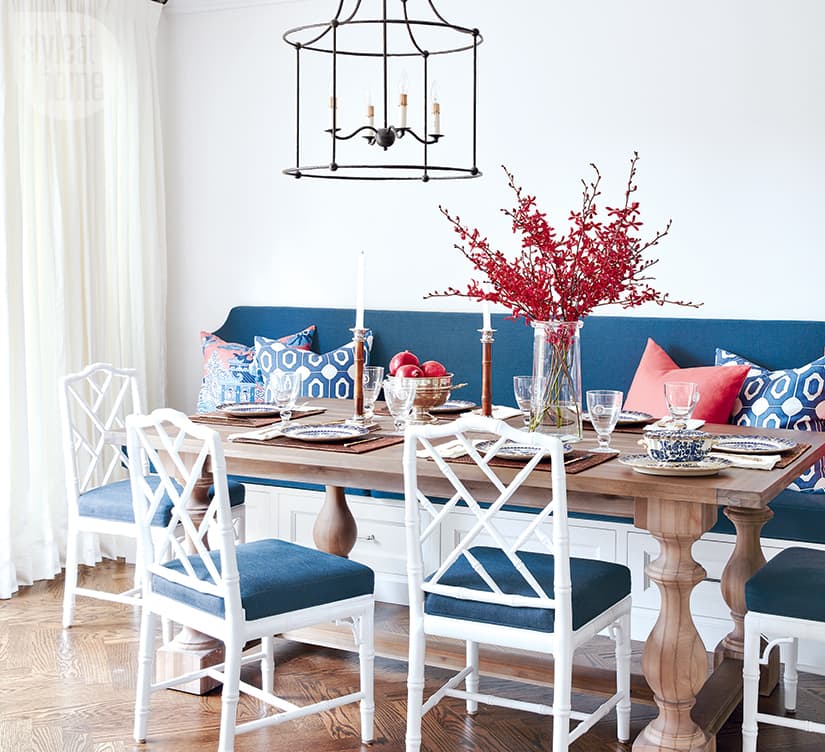 But she made sure to use pattern sparingly, so the scheme can be easily switched up should the homeowners tire of it. “The room’s foil is decidedly neutral. Reupholster the chairs and change the toss cushions, and you have a whole new look,” says Robyn.

Tastes evolve, after all, and what’s important in a home is that it speaks to its inhabitants. And Robyn is sure that, like her, these homeowners will always gravitate to rooms that aren’t stuffy. Last year, they hosted a boisterous party during the NHL playoffs: “We had people all over: on the sofa in the family room, on the eat-in area’s banquette, at the kitchen island and in the backyard – you can see the TV from there,” recalls one of the homeowners, who says it was truly memorable for everyone in attendance. Happy houses have that effect on people. 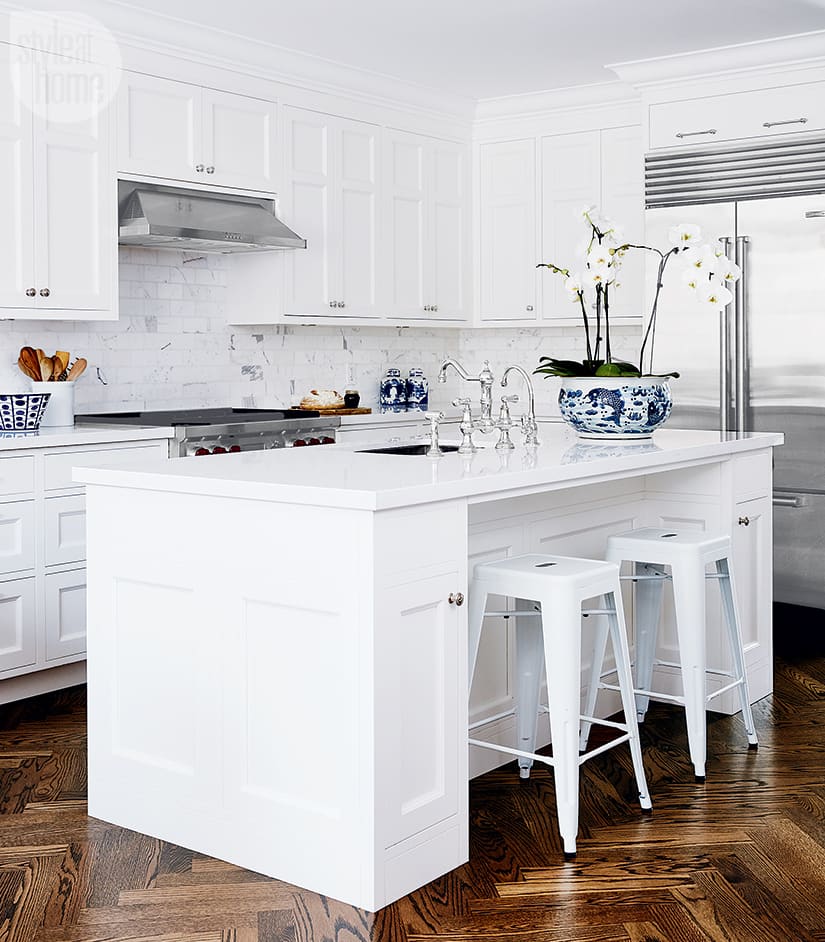 “White kitchens never go out of style,” says one of the homeowners of the choice to go classic with crown moulding, Caesarstone countertops and a Calacatta marble subway tile backsplash. A Dutch door, made out of two custom ones, divides the front of the house from the back. 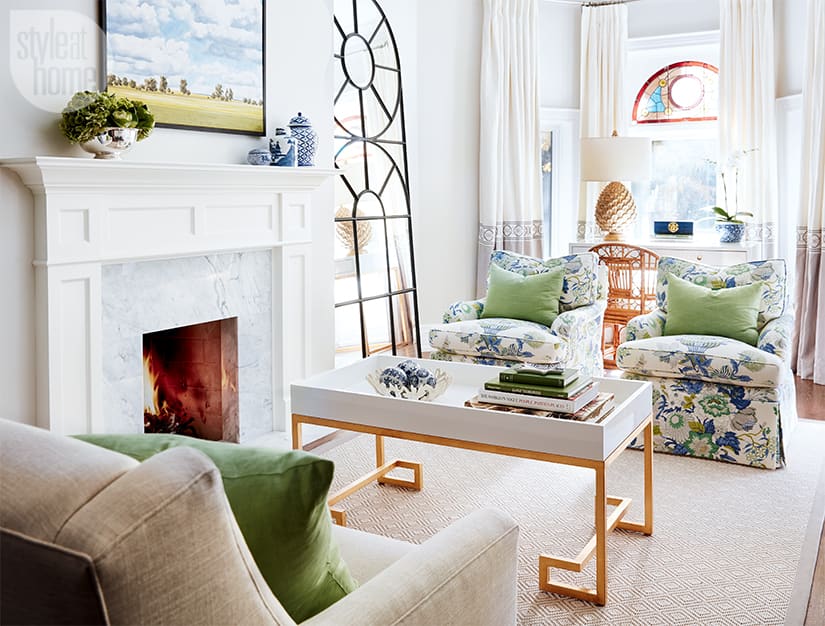 In the radiant living room of this Toronto Victorian, designer Robyn Rider layered fresh prints that bring to mind the beach. The bold botanical armchair fabric takes centre stage, while the rug and drapery’s subtle patterns play supporting roles. “Too much pattern can make a space feel cluttered and less sophisticated,” warns Robyn. 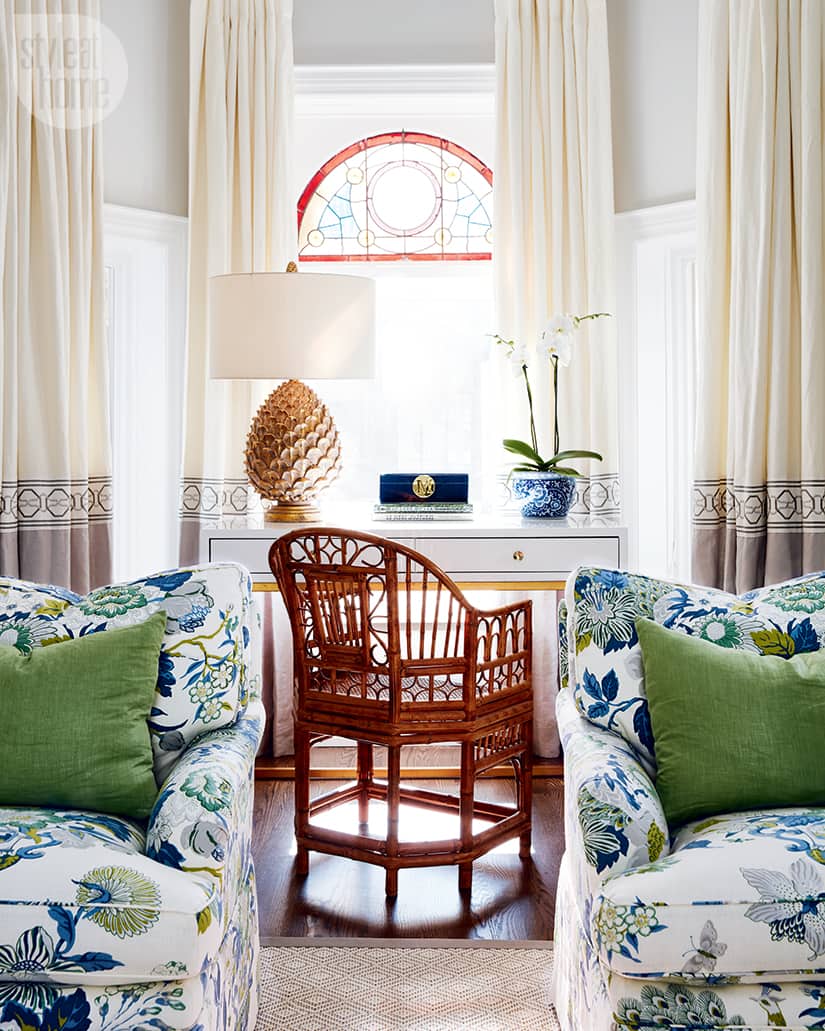 A lively tableau under the living room’s original stained glass window features the glitz and glamour associated with Hollywood Regency decor, including a gilded artichoke table lamp, a lacquered desk, a retro bamboo chair and a chinoiserie pot. 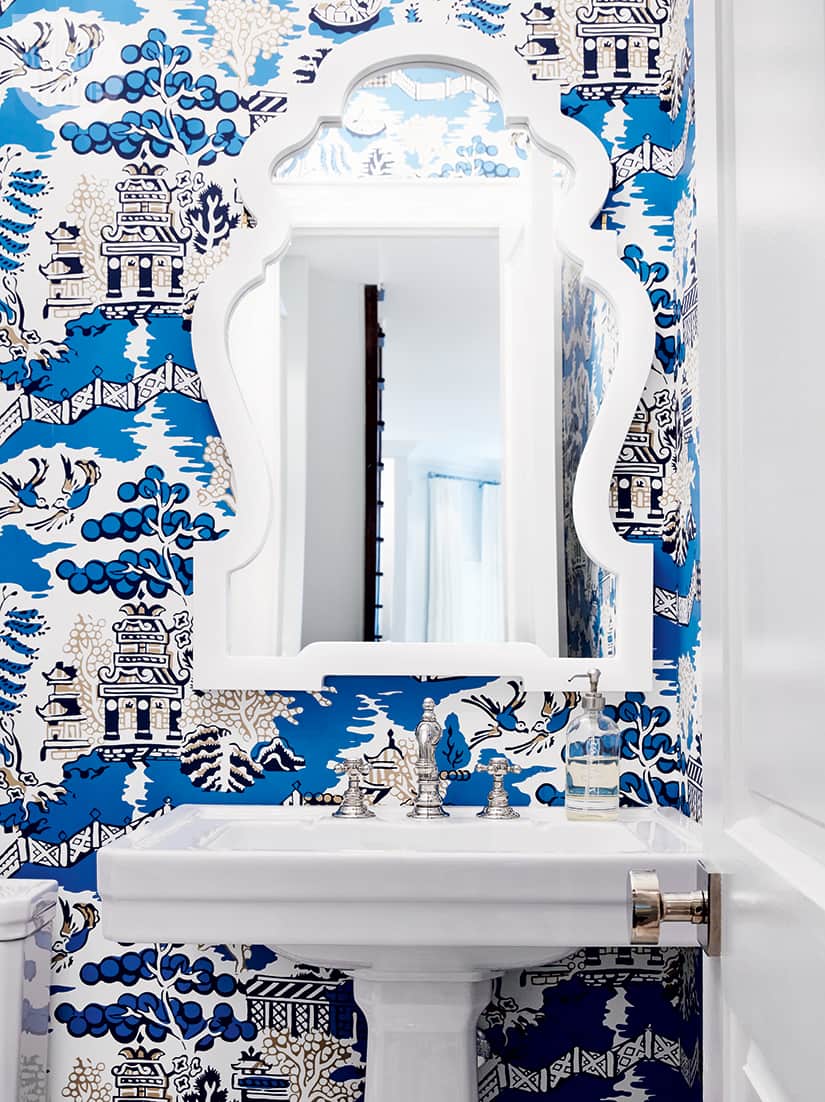 “It’s a small space, so it can take it,” says Robyn of going for drama in the petite powder room. 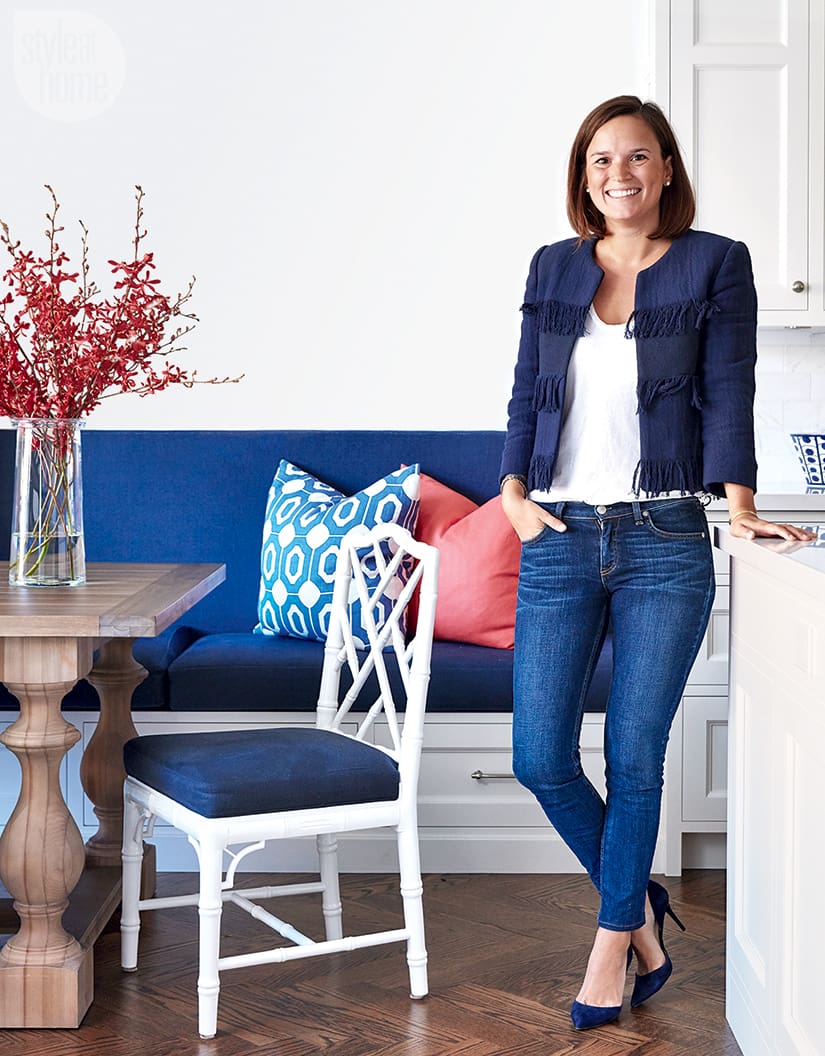 “Blue and white is one of my favourite colour combinations,” says Robyn (pictured). “It’s so fresh and happy.”