How changing up a layout opened the floor for a trendy family home with style that boasts staying power.

If a trend is the general direction in which something is changing, then this Toronto home, designed by Jordy Fagan and Alana Fire­stone of Collective Studio, is a definite trendsetter.

A century­old semi in the city’s Wych­ wood neighbourhood, the 2,000­ square­foot space was a builder’s fix and flip – admit­tedly gutted and brand new, but generic (in the nicest way). It wasn’t at all in sync with its new owners, Jenny and Tim, parents to two young boys and fans of laid­back style. “We needed to make it relaxed, casual and family­-friendly for them,” says Jordy.

Before layering in an imaginative array of colours, textures and custom­built solu­tions, the designers took charge of the open floor plan (trend seekers take note – this is where it gets juicy). “We made the bold suggestion of scrapping the existing layout,” says Alana. “It was something Jenny and Tim hadn’t considered, but they trusted us to run with it.”

Rejigging the standard plan – a living room at the front that opened onto a dining room, kitchen and small back den – to one customized for family life was a design game­changer. Like a lot of city homes, this one has parking at the rear, making the back door the most used entrance. Rec­ognizing this, Jordy and Alana replaced the den with a practical mud room on one side and an eat­in area, defined by custom­ made banquette seating, on the other.

With this handy light-filled spot for everyday meals in place, the designers pushed the dining room to the front of the house, where it’s used for formal entertaining, and put a family room smack dab in the middle of the floor plan. “We wouldn’t have thought to change things up like this, but it suits how we live,” says Jenny.

Like the new layout, the decor reflects the owners’ personality to a T. Furniture choices, such as soft ottomans and woven leather chairs, double down on casual comfort and functionality, while rugs and other textiles channel the low-key boho vibe Jenny favours. Throughout, pops of dynamic paint colours and bold hardware are trends worth copying, but perhaps the most exciting feature is the one that can’t be found in a store or online. “It’s livability,” states Jordy. “The biggest design idea is moving away from formal rooms and using every aspect of a space.” And Jenny is on board. “We use nearly every square inch of our first floor, every day,” she says. “I wouldn’t have it any other way!” 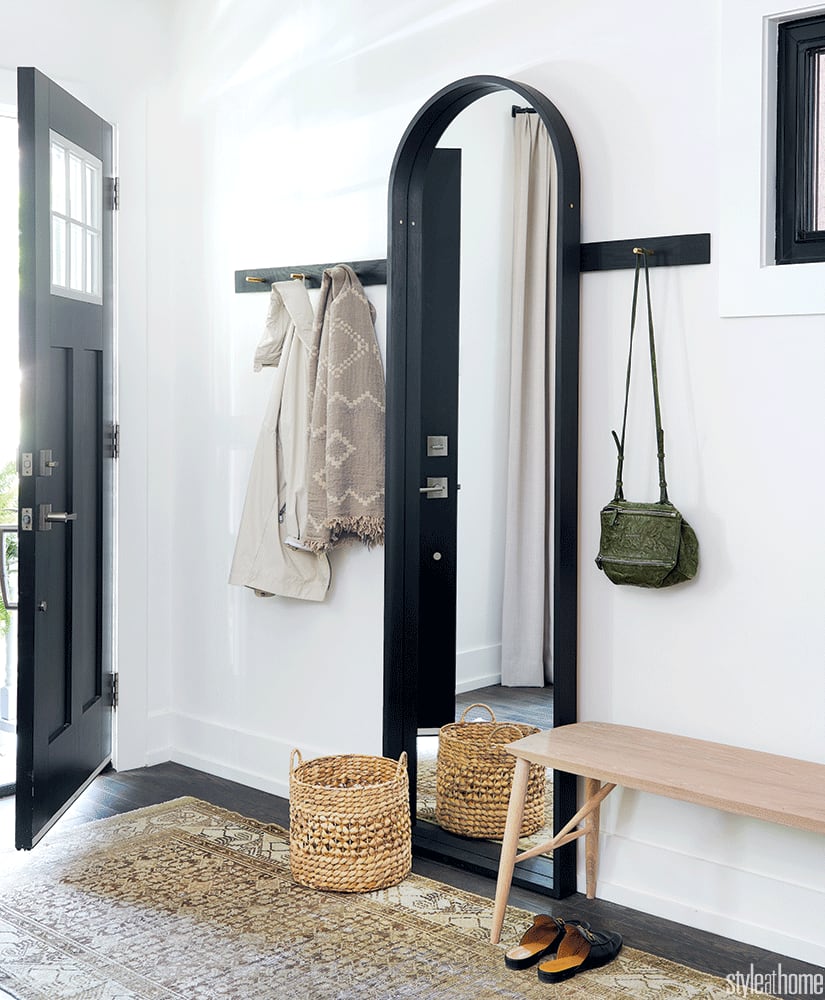 The entryway boasts a simple and striking mix of functional furnishings. To brighten things up and keep the dark floors from feeling overwhelming, the designers added rugs and light tones throughout. 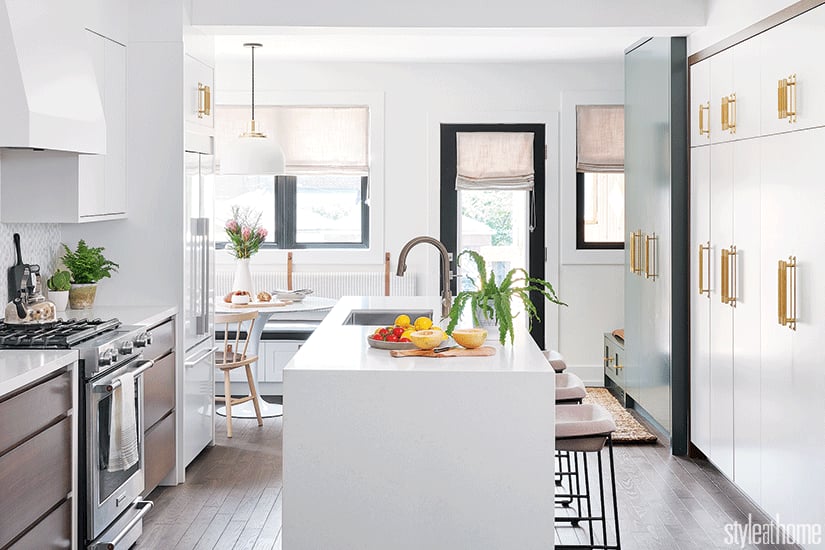 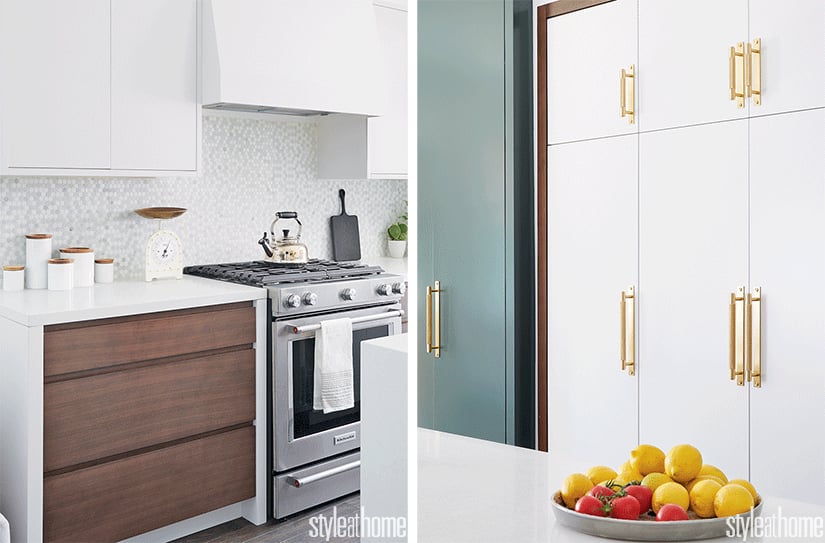 The kitchen was in great shape, so the designers simply styled it by switching out the hardware and faucet. 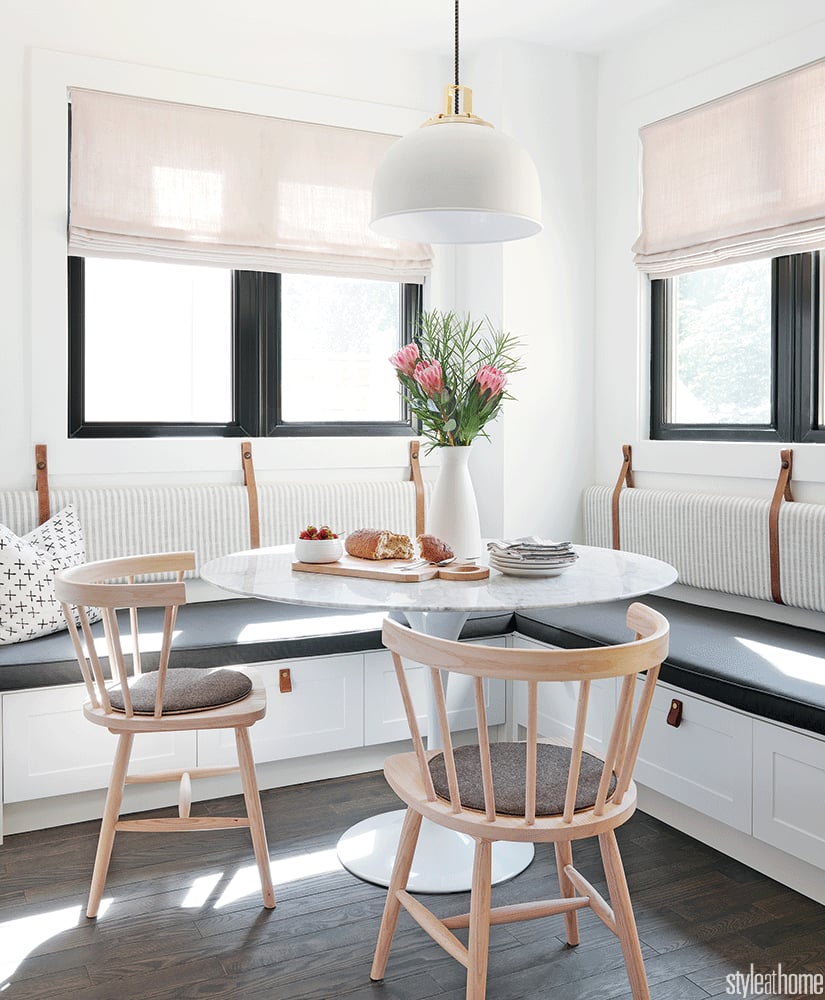 The eat-in area’s custom banquette boasts ideas to steal. “The grey seat cushions look like linen but they’re vinyl, which makes wiping up easy,” says Alana. The back cushions are actual linen, but the real star is the leather strapping. It’s also subtly, and smartly, echoed in the leather drawer pulls below. 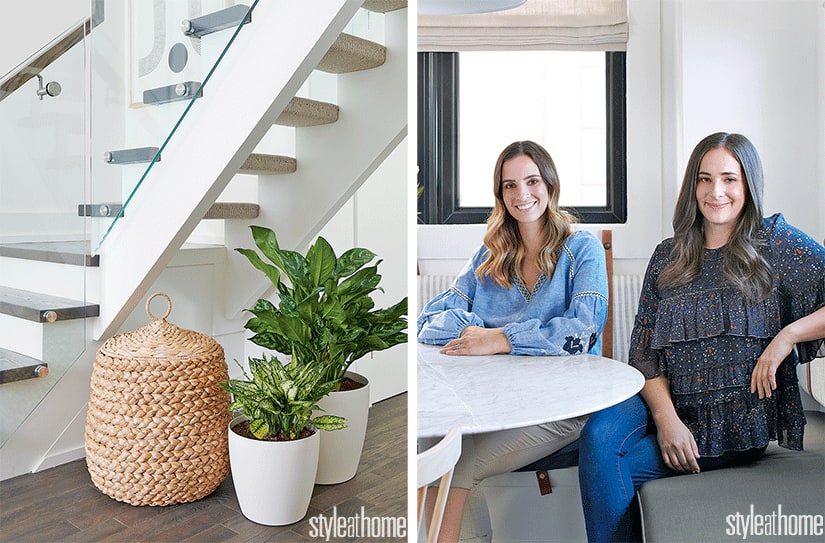 Houseplants are a huge trend right now, but the designers advise proceeding with caution. “We love plants,” says Jordy. “But make sure you know your lighting – fiddle-leaf fig trees will have a hard time surviving in north-facing rooms, for instance.” The chic woven basket hides kids’ toys 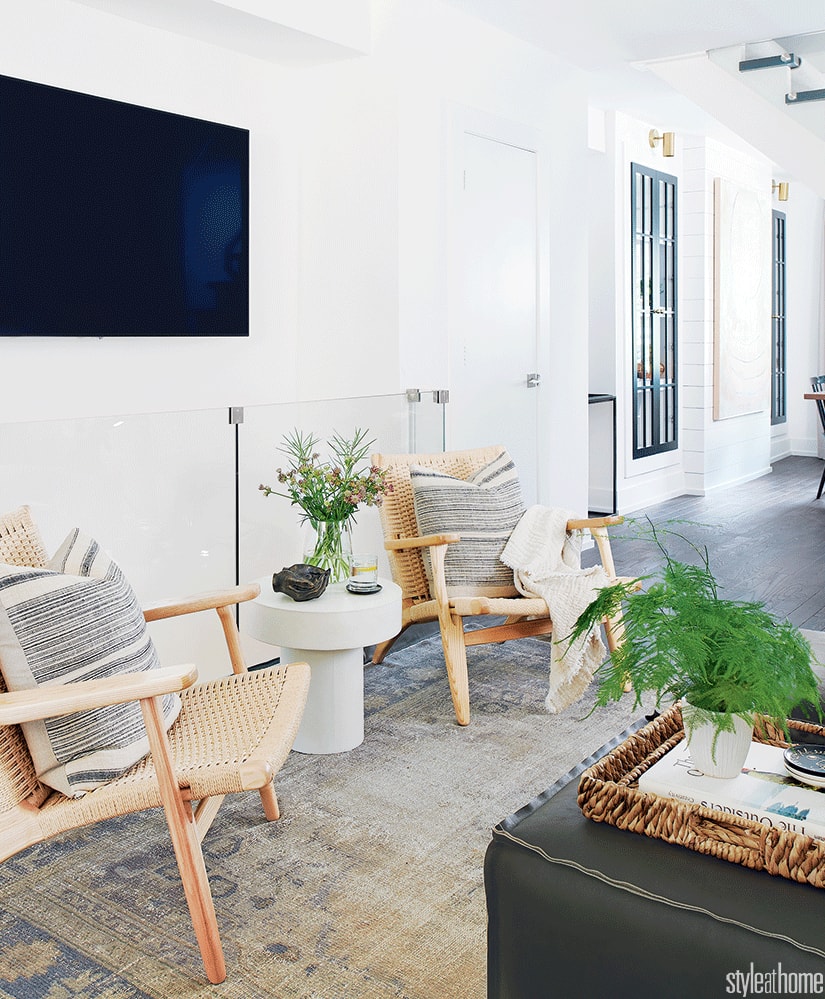 “Since the homeowners aren’t really TV people, we didn’t make one a focal point,” says Alana. “The placement of the furniture encourages the conversation of a living room with the comfort of a family room.” 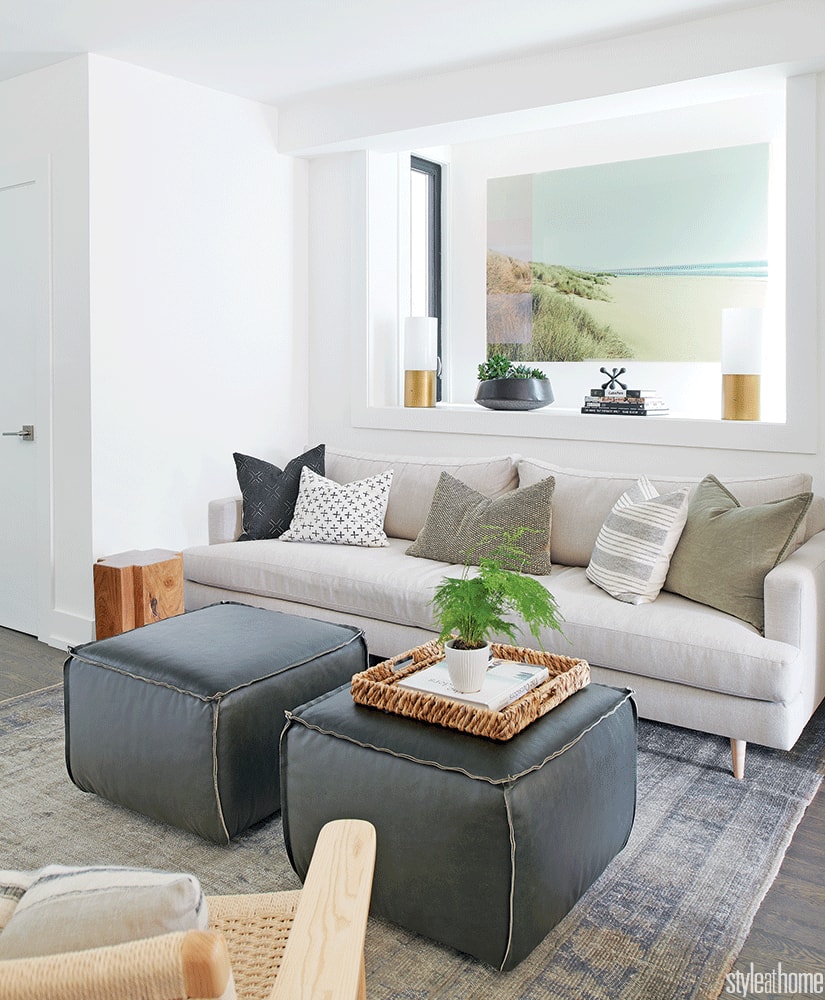 Influenced by the lifestyle of this young family, the designers opted for a long sofa with a single seat cushion in the living room. “This invites more people to take a seat,” says Alana. 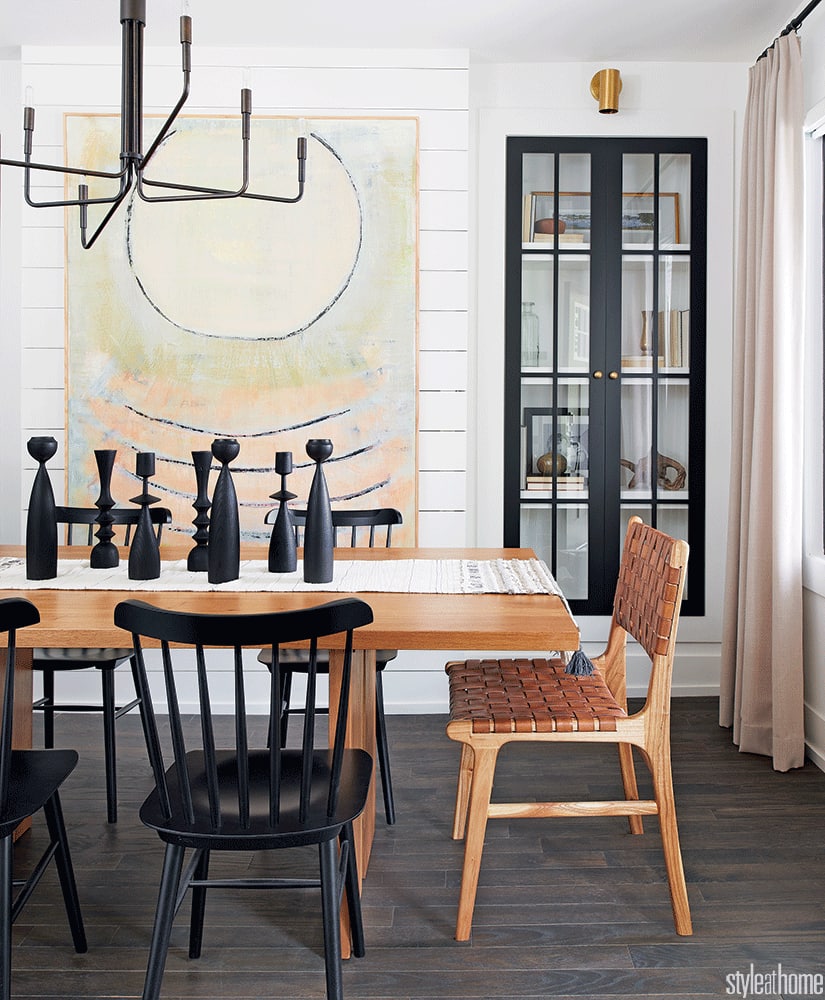 The designers’ love of texture is on display in the dining room, where leather-clad chairs share the space with other woven elements, such as baskets and a dramatic wall hanging. 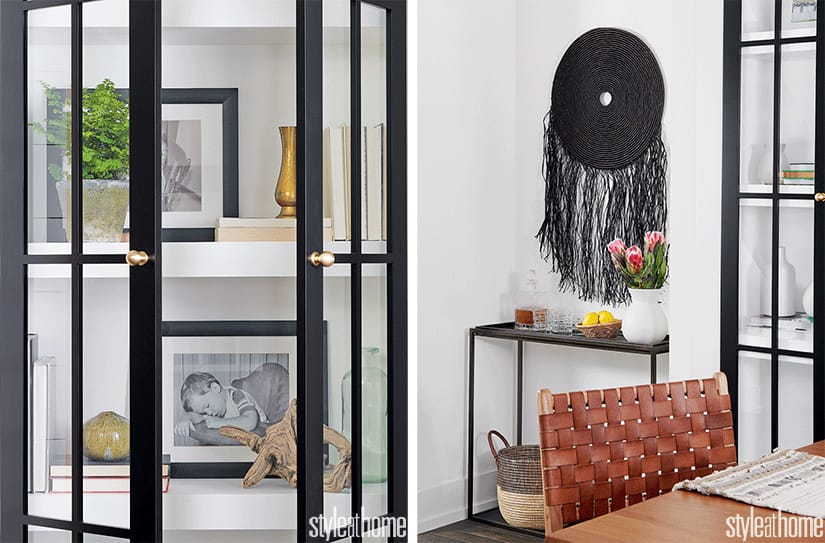 A modern-boho home that utilizes every square inch