Morning is in full swing: The kids, aged one, three and five, squeal with delight as they run around, their voices echoing from the kitchen’s eat-in area. Mom’s packing the kids’ backpacks, Dad’s cooking breakfast, and toys are scattered across the floor. It’s a rainy early morning, and for the children who live in this Vancouver Craftsman-style home, messy is just another word for happy.

But everything that’s strewn about can easily be hidden away. Thanks to interior designer Jamie Deck, clever storage is everywhere in this 3,400-square-foot open-concept house. “When I met with the homeowners, one of the first things they told me was they wanted to keep clutter at bay,” she says.

Solution one: Convert the first-floor den into a minimalist mud room-slash-office. “It’s actually my favourite room in the house,” says one of the homeowners. “The closet has low racks so the kids can easily hang their coats and toss in their backpacks. It can get crazy inside that closet, but I just close the doors, and ahhh! The house feels instantly calm.”

Surprisingly, the home’s white-on-white palette was chosen to impart serenity without getting in the way of their kids-will-be-kids lifestyle. Carefully chosen light yet stain-resistant fabrics on the bar stools, sofas, rugs and pouffes can be wiped clean in seconds. “Honestly, the tricky thing about going all white isn’t keeping it clean,” says Jamie. “It’s using white in ways that don’t appear too sterile. That’s where organic elements come in. Natural stones and fibres like marble and linen are soft and inviting.” 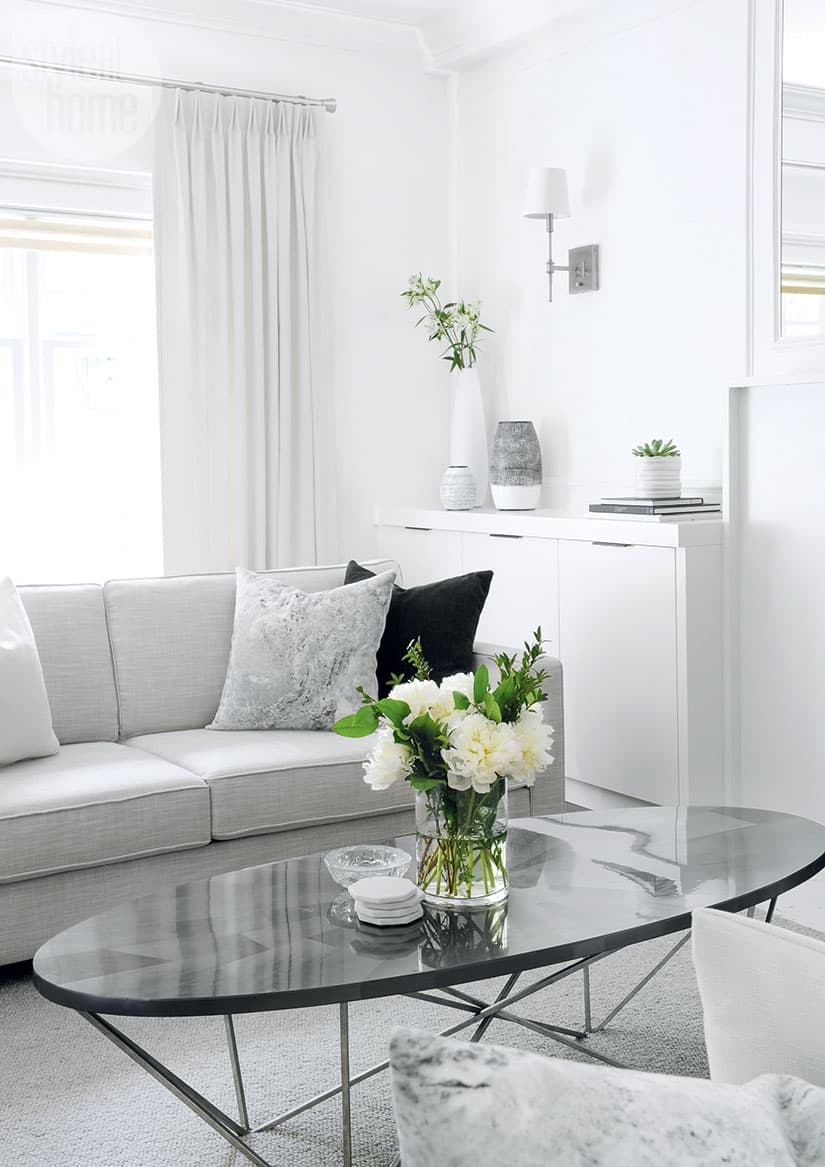 Do you know what else is inviting? The home’s multiple plush sofas that offer spots to rest. In the family room, for example, a sofa and a custom sofa-sized bench form a cozy conversation area where there was previously an ill-suited fireplace. “When my friends drop by with their babies and kids, they nestle onto the couch to chat and let the kids play at their feet,” says the homeowner. “It’s great.” There are two more sofas in the living room. At first, the husband was wary of that set up. He’d initially wanted a sofa with two chairs because he insisted his friends would never sit side by side to chat and hang out. “Now, I walk in and there they all are, feet pulled up, looking as cozy as can be,” says his wife. And perhaps best of all, Jamie put a sofa in the bedroom. “Though I was initially reluctant to include it, I’ve since learned it’s the perfect place to enjoy a cup of coffee with my husband before the morning rush,” says the homeowner. And it’s a prime place to enjoy quiet time away from the kids.

As active as life is on the main floor, upstairs there’s an escape: the master bedroom, which is modelled after a hotel room. “We love hotels,” says the homeowner. “We even sent pictures to Jamie of rooms we’d admired on vacations!” The designer ran with the idea. Spare, sophisticated and serene, the room is fitted with white bedding and contrasting toss cushions. Layers of elegant flowing drapery muffle sound. “It’s perfect,” says the homeowner. “All that’s missing is the room service.”

Thanks to ample storage, calming shades and timeless touches, this buzzing family home now feels like a year-round retreat. 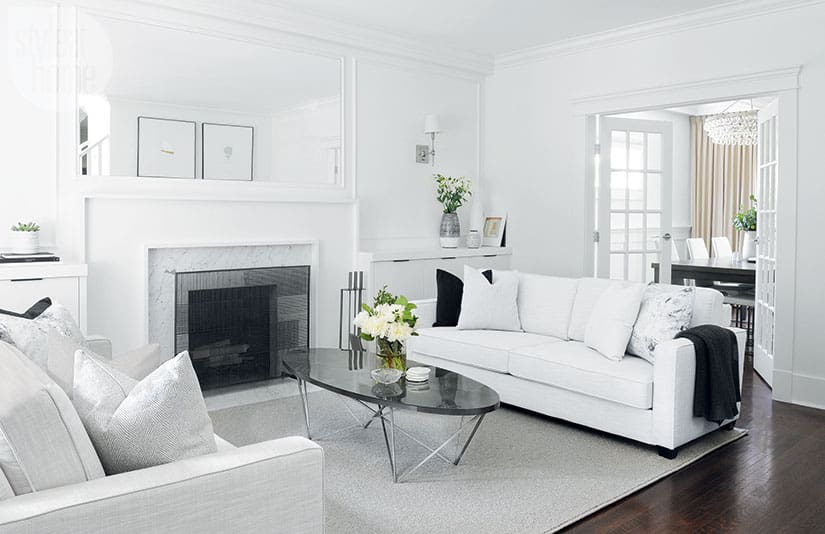 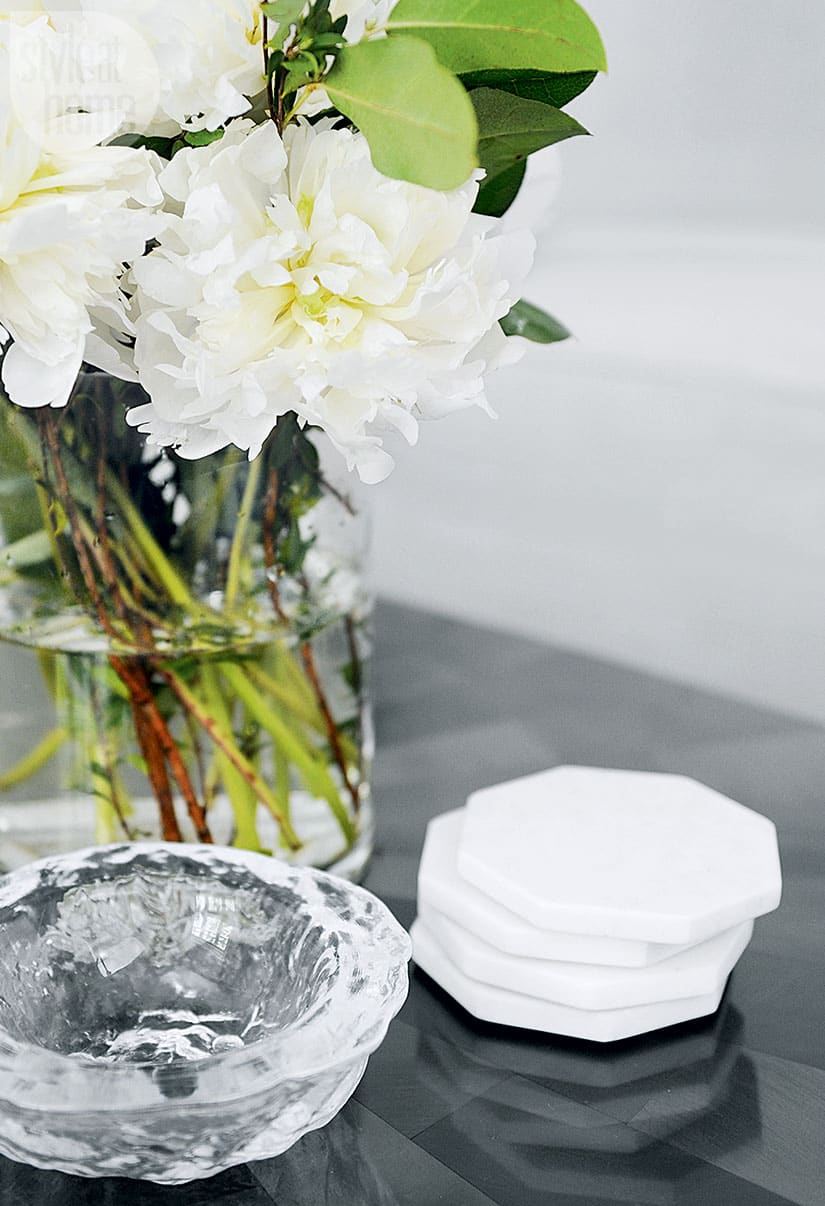 The all-white living room is long and narrow, so interior designer Jamie Deck set a cozy conversation space around the fireplace in the centre to keep the area intimate and inviting. The custom millwork is a classic Jamie move. “Built-ins maximize space and offer ample storage, while strategically placed mirrors visually expand the room,” she says. The quiet white and grey tones on the marble fireplace surround link to the sofa and rug, as well as the chairs in the connecting dining room. 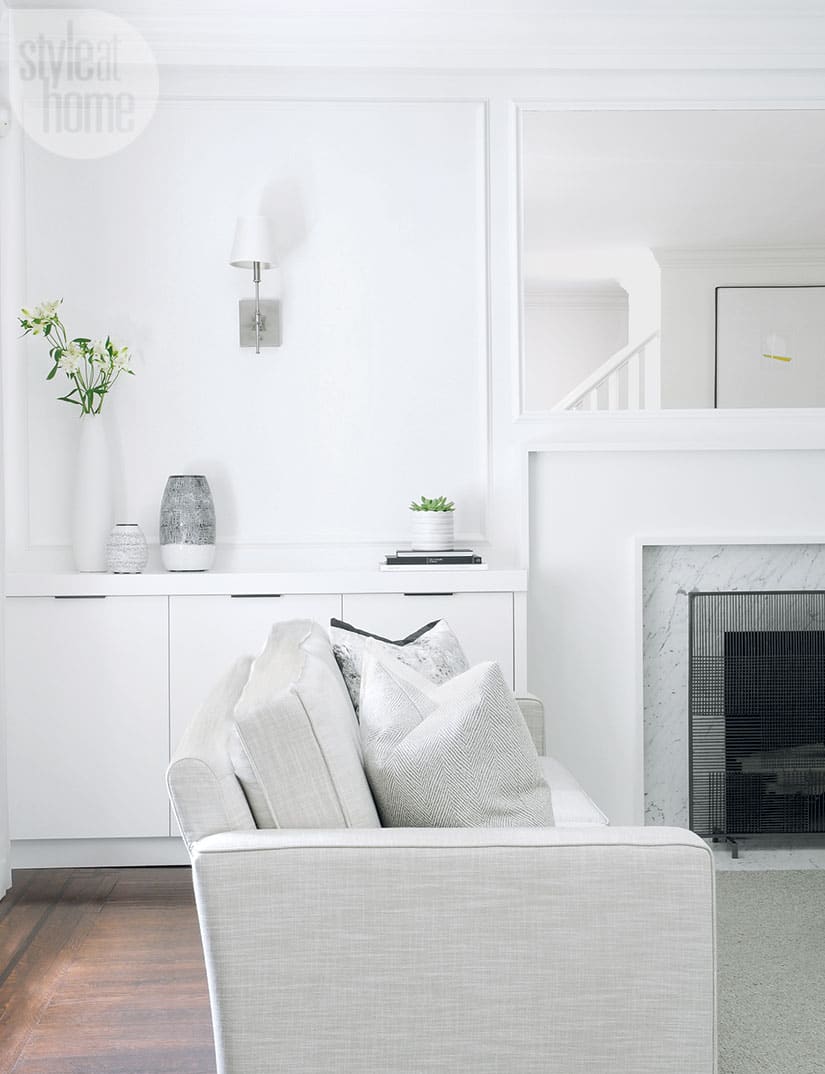 “Built-in storage equals built-in tidiness,” says one of the homeowners. “That’s where we hide photo albums, extra dishware, vases and kids’ toys, too!” 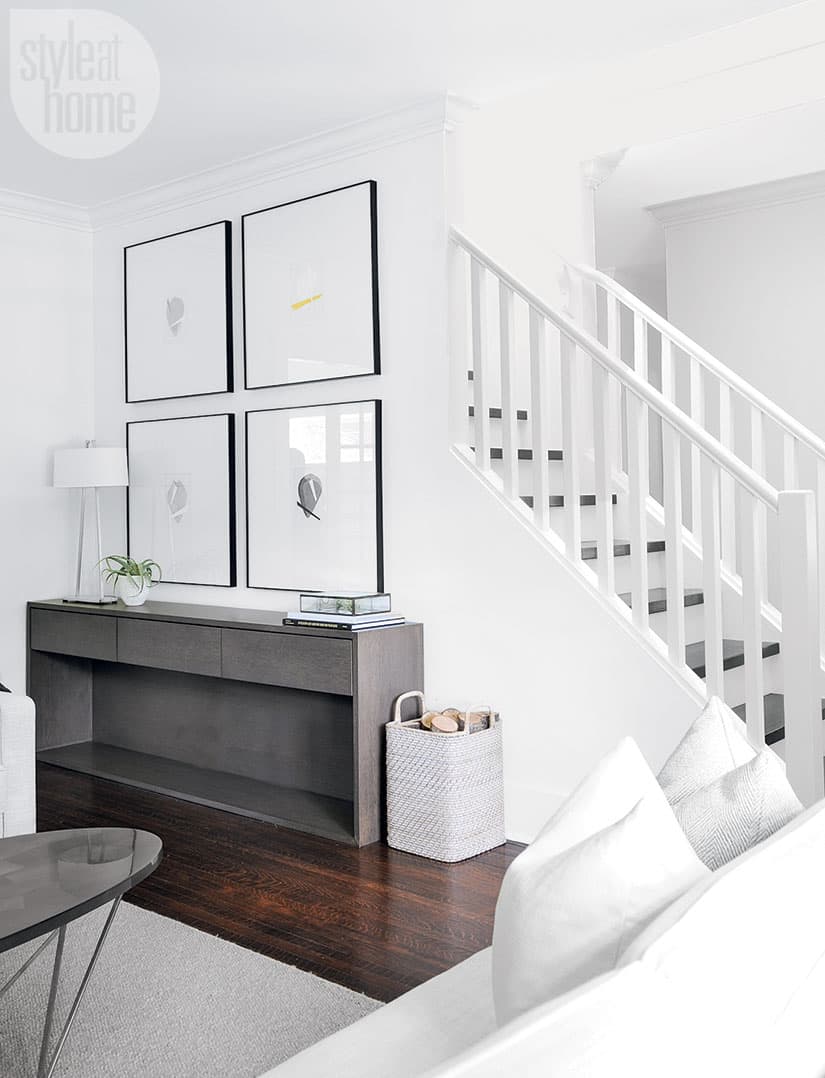 These pieces by Montreal-based artist Zoë Pawlak are actually very small, but Jamie made them appear huge by using oversized mats and frames. Arranged in a simple grid, they’re graphic and modern. Jamie had the staircase painted white for continuity; the sideboard doubles as another hiding place for clutter. 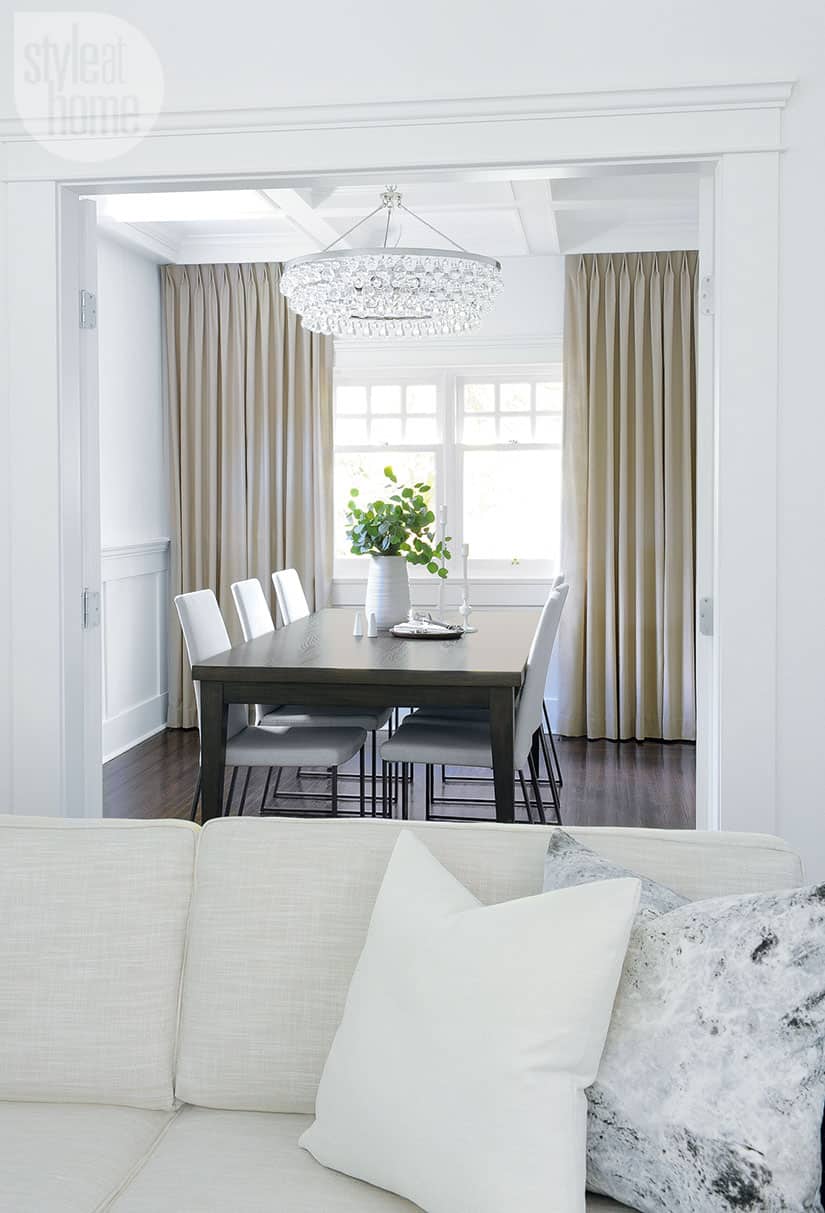 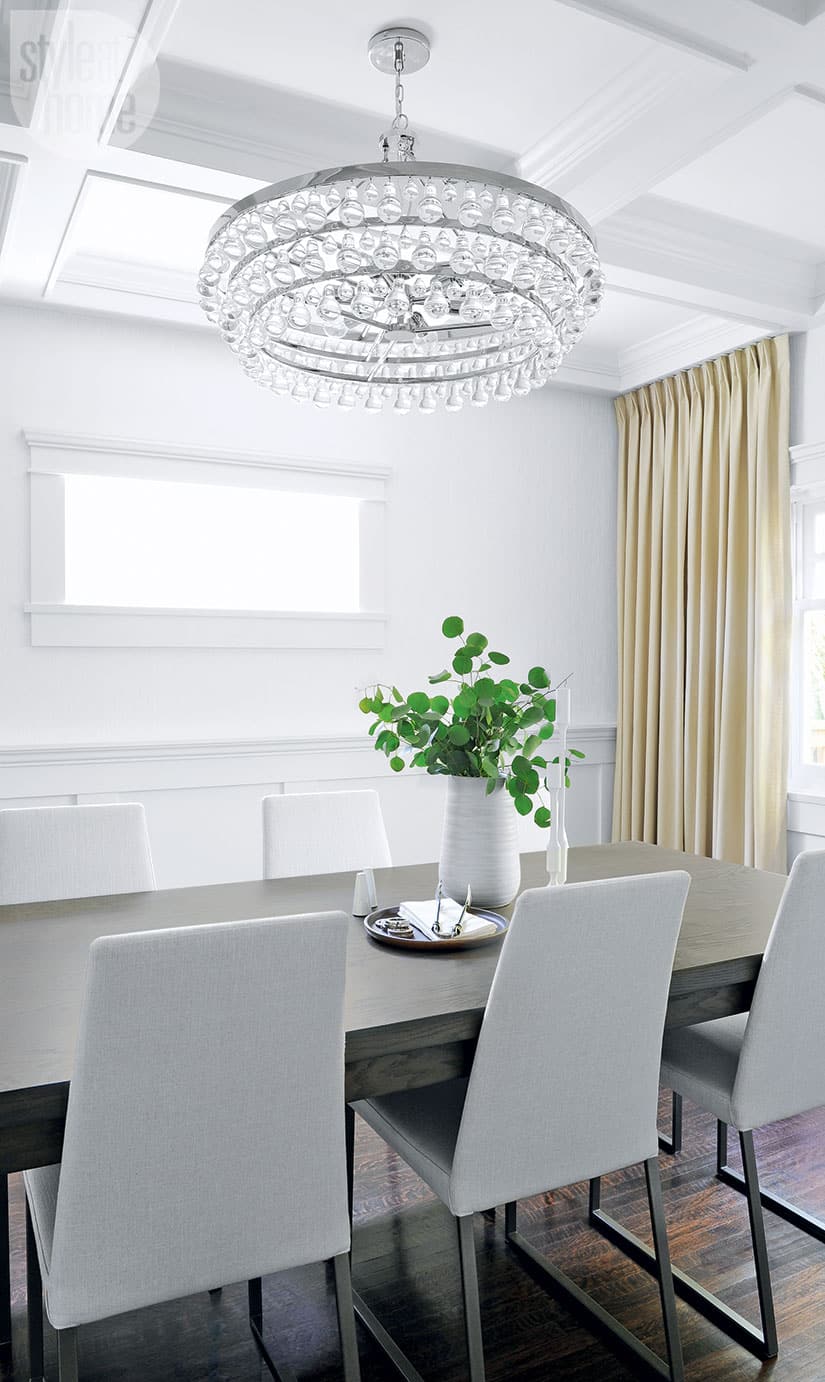 Silver-flecked wallpaper looks white in the daytime, but at night it shimmers and shines. “We kept furniture to a minimum and focused on straight lines to keep the room looking open,” says Jamie. “But for the lighting, we emphasized glitz.” The table has a solid wood top but faux wood legs. “It’s a way to save money that nobody will notice,” explains the designer. 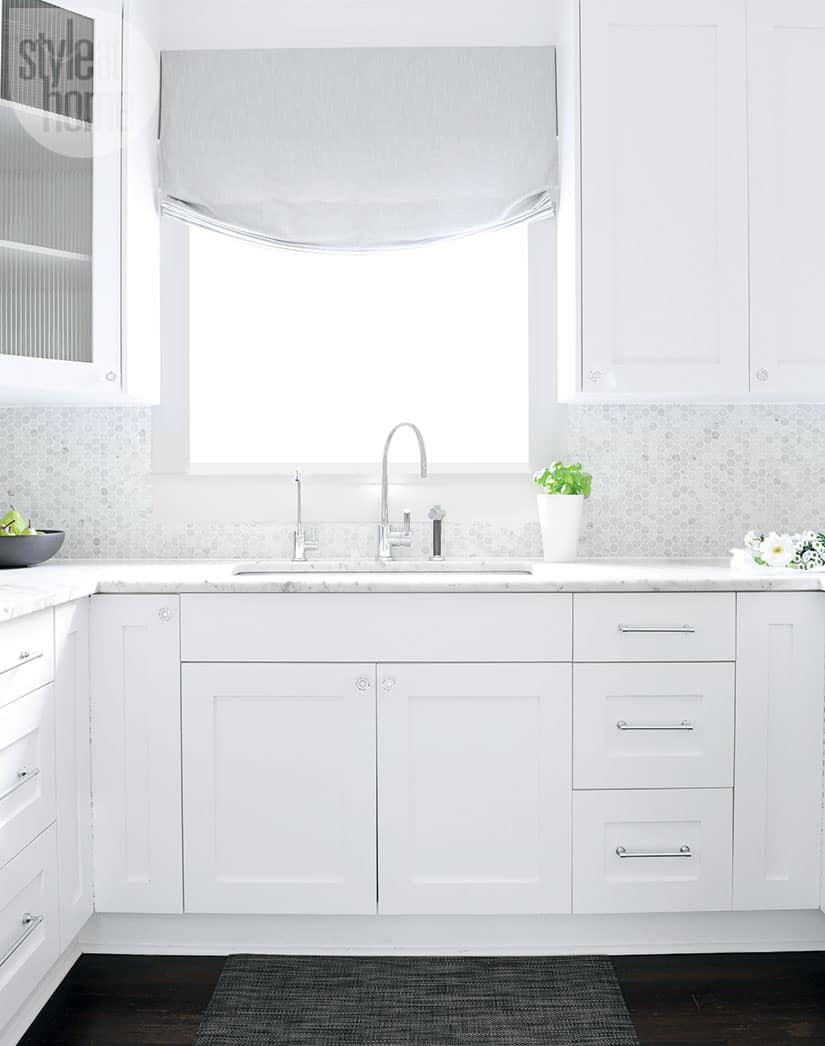 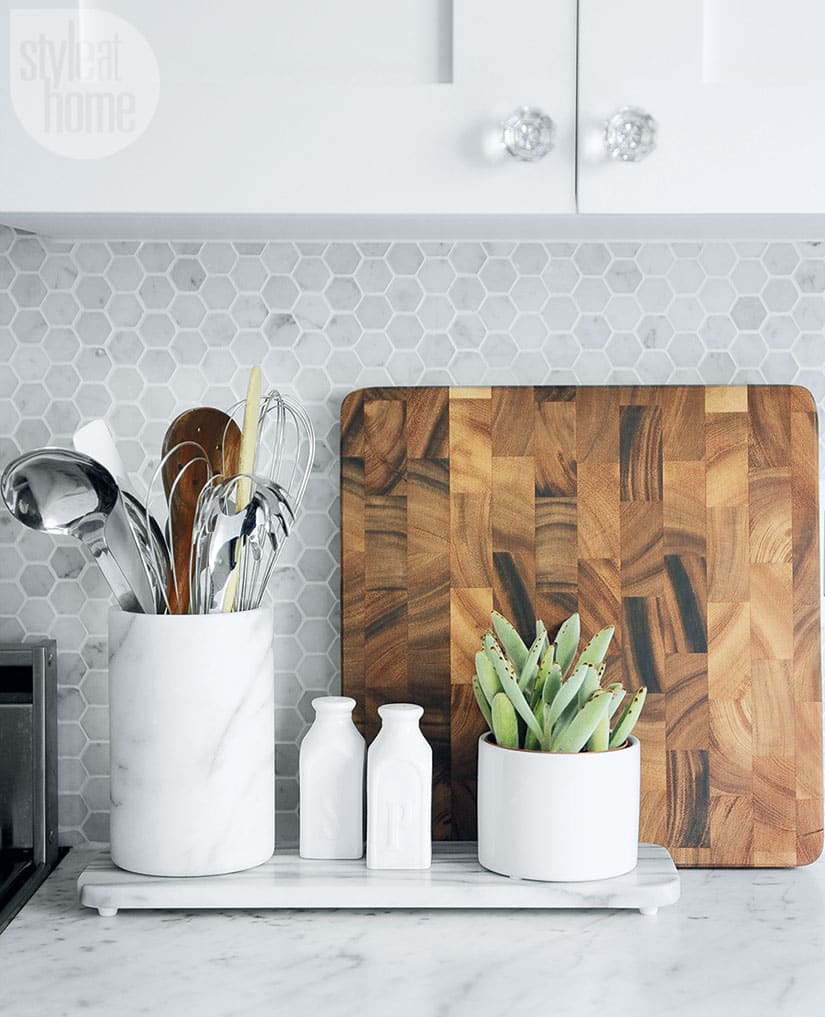 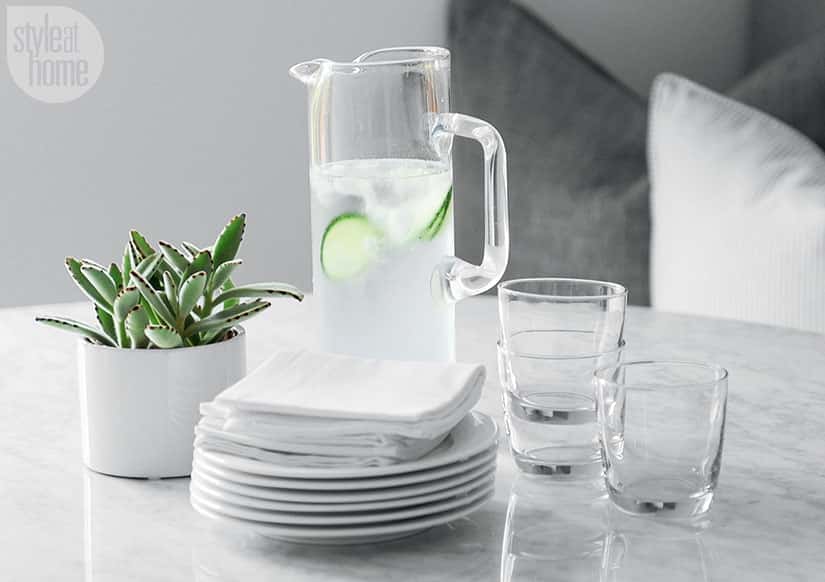 “The homeowners plan to do a full kitchen reno in the future but opted for a facelift to conserve funds for now,” says Jamie. So this kitchen update was full of saves: The countertop and flooring stayed the same, while the cabinetry, which was about eight years old, was simply treated to a coat of white paint. This allowed Jamie to splurge on other items, such as the marble honeycomb backsplash and new hardware. A Roman shade adds a simple layer of softness. 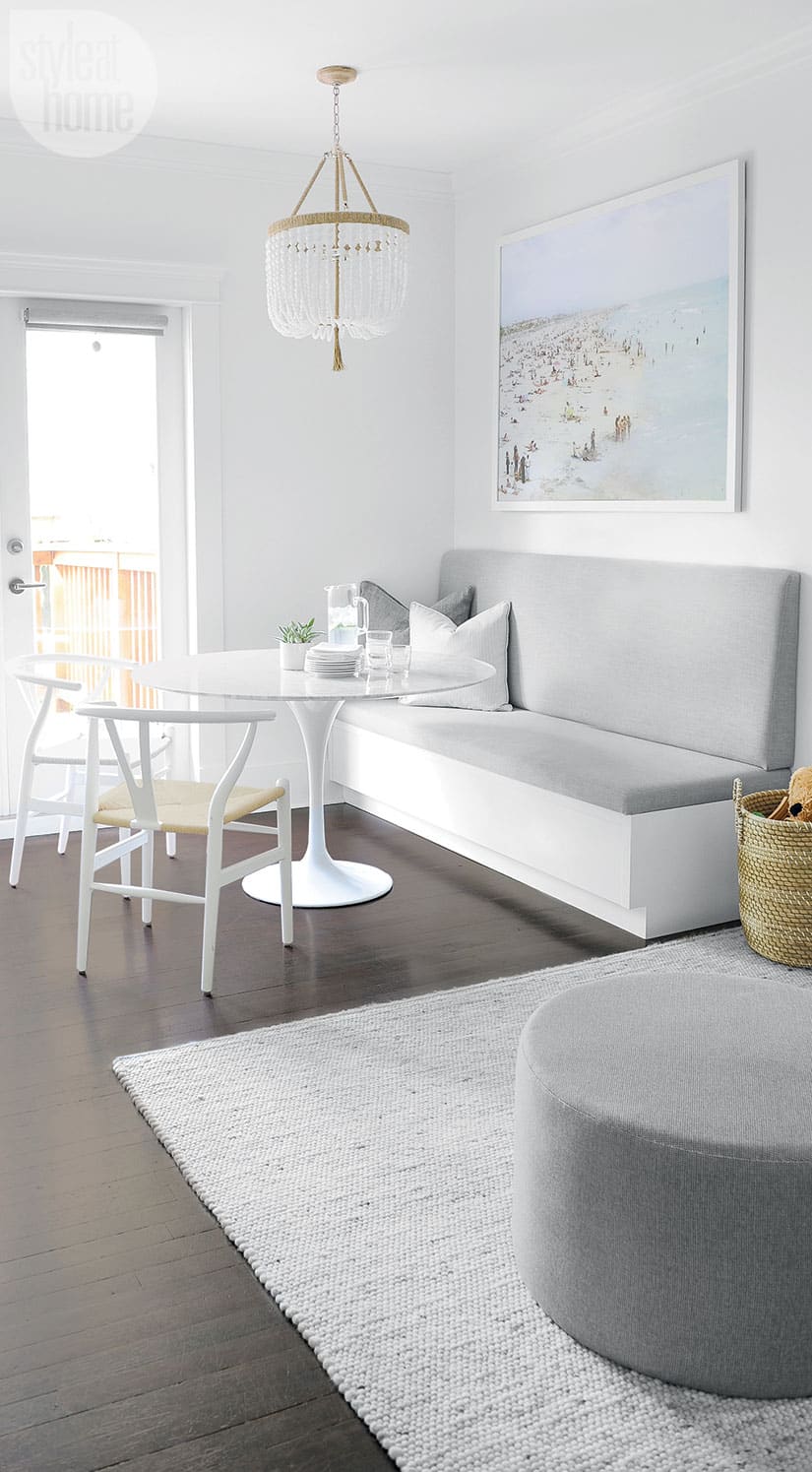 "We spend a ton of time here,” says one of the homeowners of the eat-in area, which is a hub of activity all day long, from busy breakfasts and quick snacks to happy crafting and friends dropping by for a drink on weekend afternoons. Jamie chose a custom banquette with an easy-to-remove cover for washing. Airy Wishbone chairs keep visual clutter to a minimum. 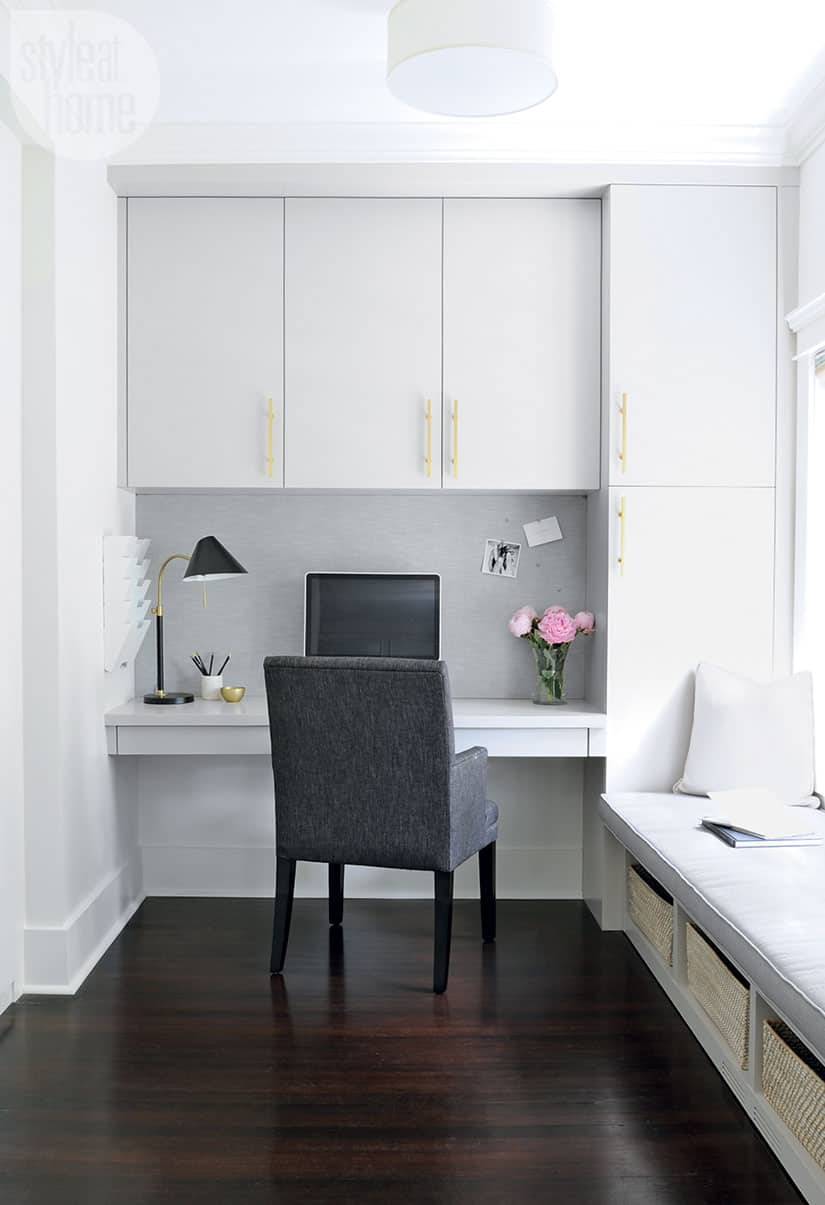 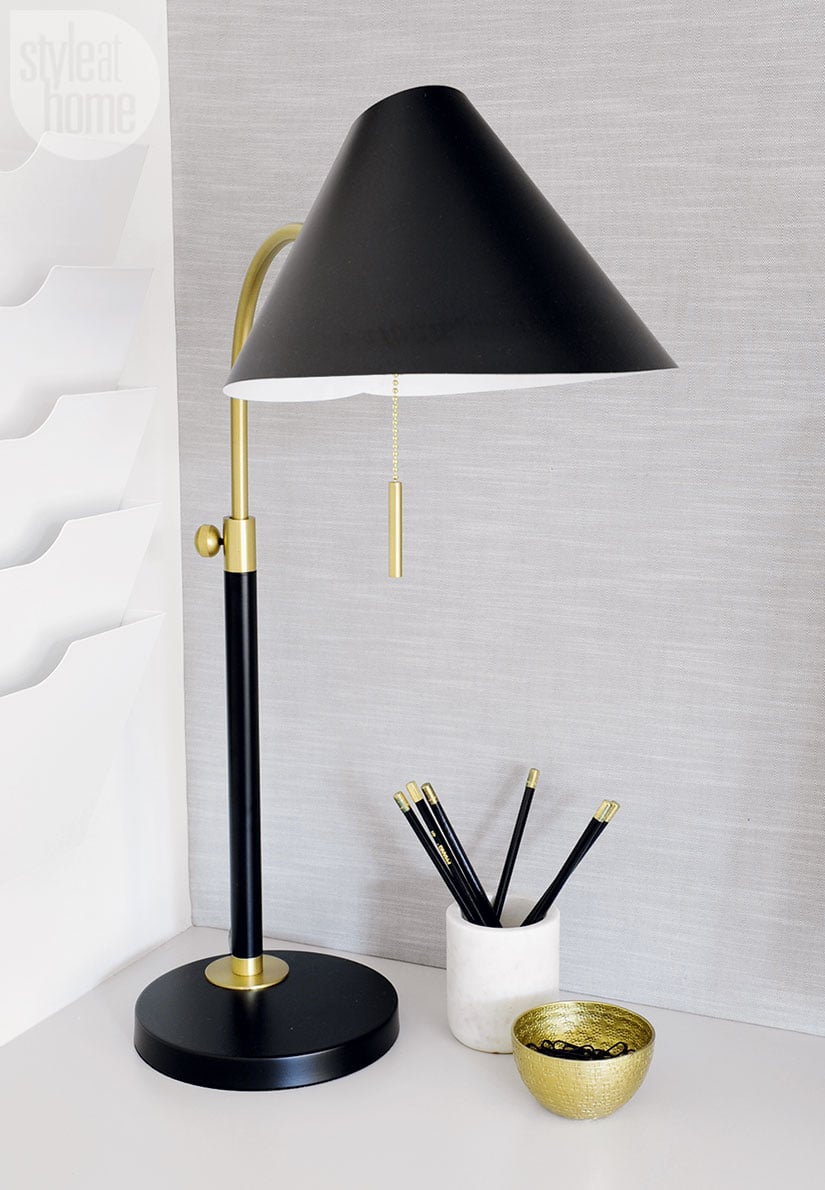 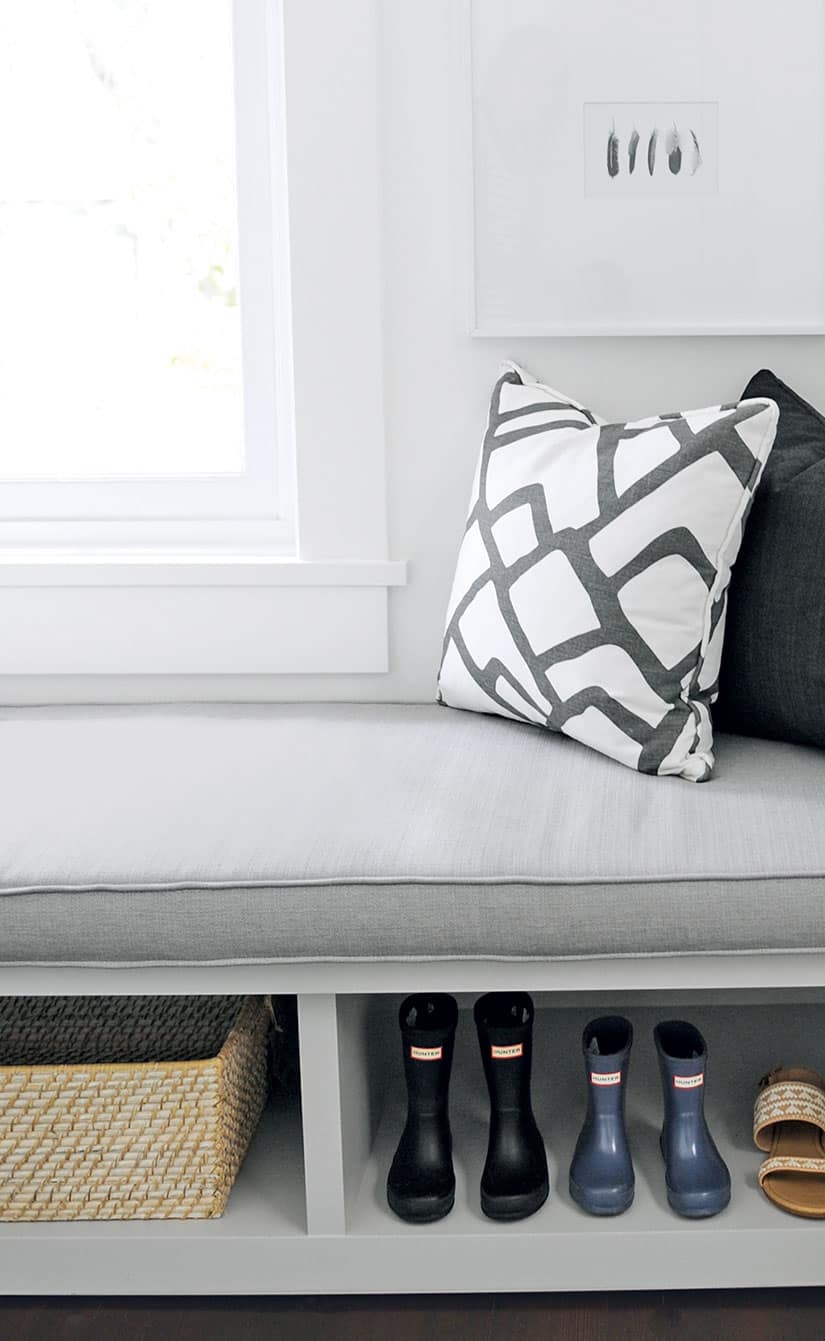 Formerly a cozy den, this mud room-slash-office was a storage coup. The extra-long built-in bench, where the kids pull on their boots and get bundled up to go outside, is the pièce de résistance. “The kids sit here and watch out the window for friends and family to arrive,” says the homeowner. Under the bench, open storage offers spots for shoes while baskets keep mitts and hats out of sight. A small desk nestled at one end of the room provides a bright and sunny spot for the homeowners to catch up on emails and work – and thanks to all the storage, clutter is never a distraction. 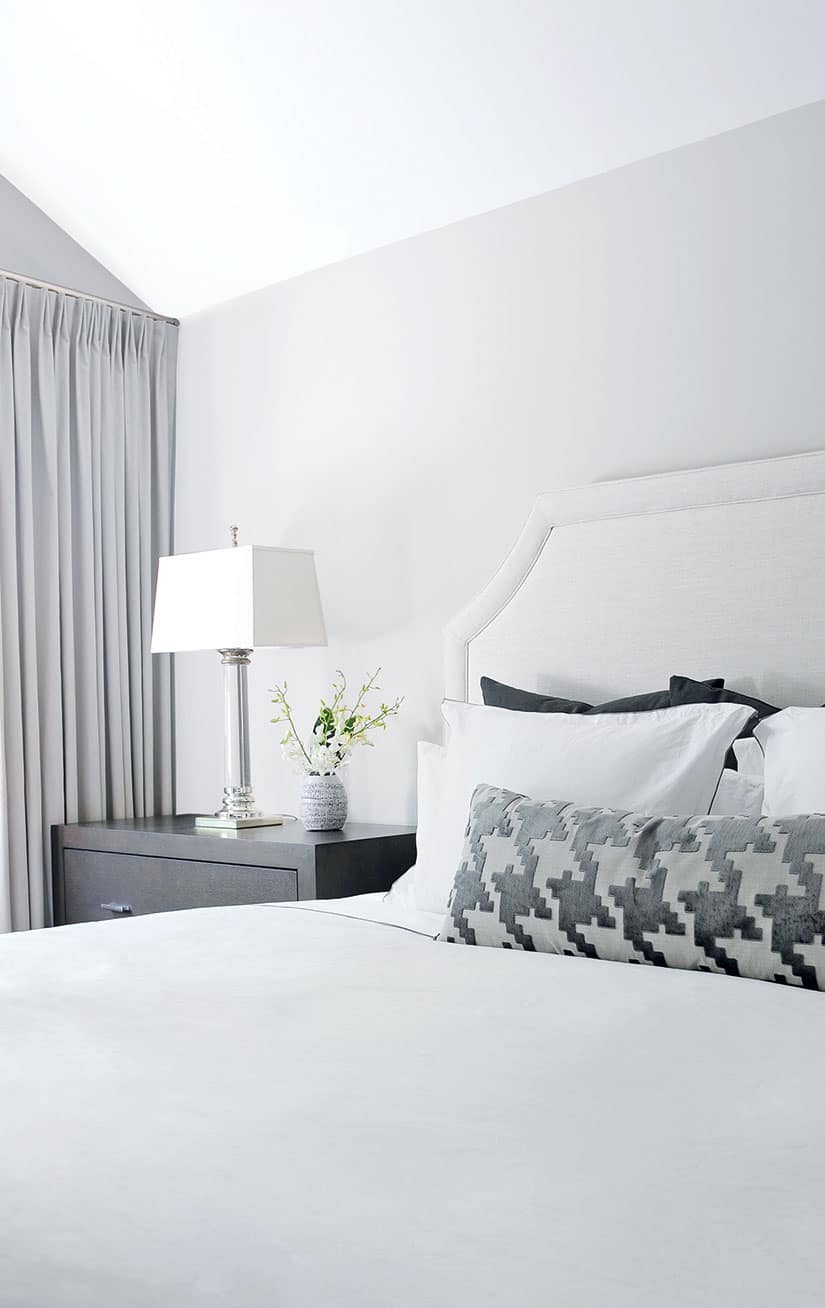 Days may be hectic, but the bedroom is an oasis of tranquil luxury. The oversized nightstands were custom-made to provide extra storage. For texture, the room features a medley of velvets, linens and cottons. “Dark accents on the white bedding are bold, not trendy,” says Jamie, who steers clients away from fads. To save money, Jamie kept the family’s existing task lamps, but added new square lampshades for a boutique hotel look. 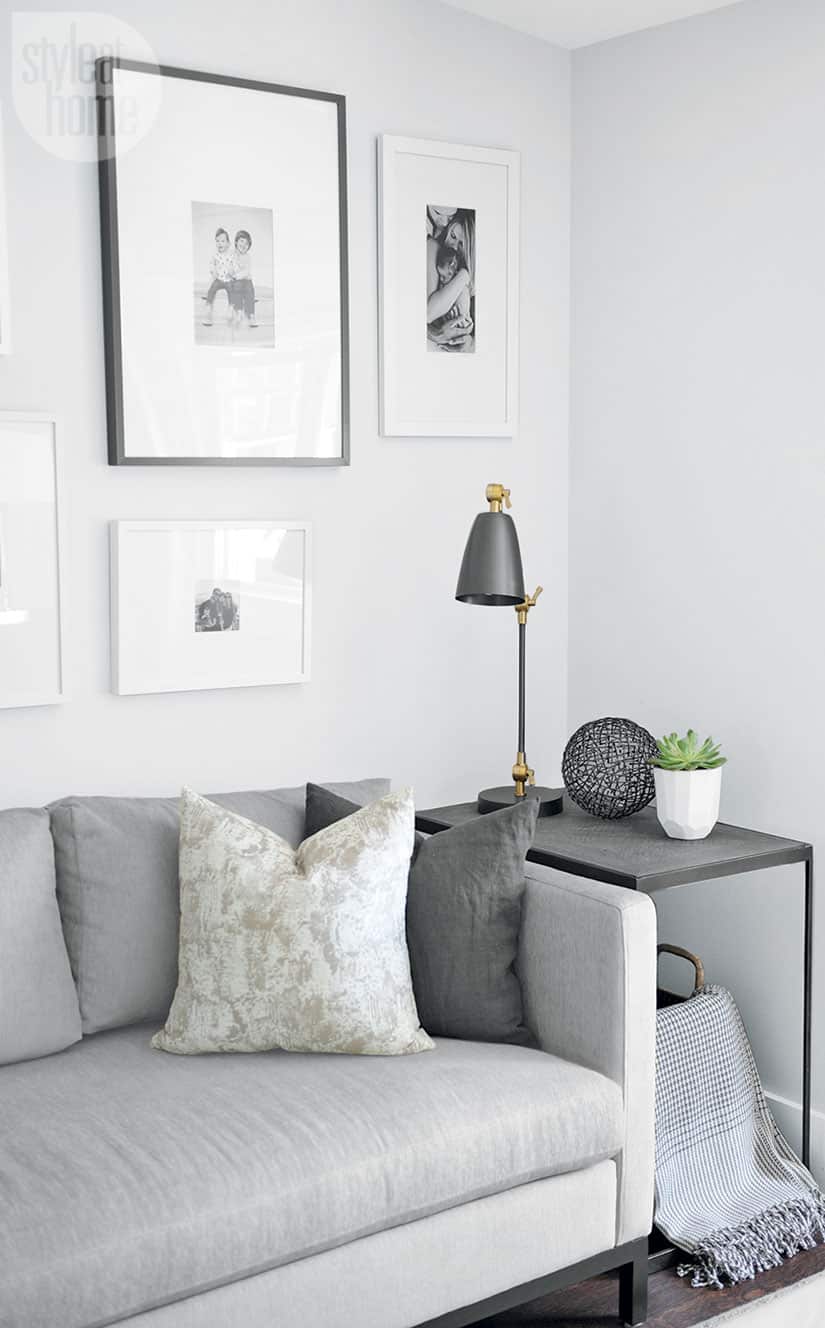 In one corner of the master bedroom, a comfy sofa surrounded by framed family photos serves as a serene reading spot.