Love It or List It Vancouver co-host and designer Jillian Harris helps a young family see the bright side of their 104-year-old abode in a colourful makeover.

Travis and Talia Clarke moved into their century-old North Vancouver home about a year and a half ago with the best of intentions. Eschewing the cookie-cutter look of newer houses, they loved the character of this 2,650-square-foot space with its natural light, high ceilings and pretty backyard. They saw beyond the bizarre combination of cedar panelling, faux brick and plaster from a bad ’70s renovation and were keen to restore the property’s charm.

But then reality set in. “There were a lot of issues with the house due to its age, and we were overwhelmed,” says Travis. Adding to the pressure, the couple was expecting their second child. (They now share the house with Wyatt, 2, and seven-month-old Marlowe, plus their English bulldog, Abby.) This presented a dilemma: Talia wanted to throw in the towel and move, and Travis wanted to persevere and stay. It’s a situation right out of, well, a certain well-known TV show.

The couple – Travis is a technical services specialist and Talia is a nurse – ended up calling W Network’s Love It or List It Vancouver. Designer and co-host of the show Jillian Harris was happy to take on the challenge and transform the house into a home where Talia would want to live. “Our primary focus was making the space functional,” says Jillian. But aesthetics were equally important. “With her new baby, I wanted Talia to be able to walk down the stairs every day and think: ‘Okay, I’m home.’ Not in some dark, dingy, outdated old house.”

At the beginning, Jillian envisioned creating a new nursery, adding a second bathroom upstairs (the house has only one) and transforming the entire main floor. But budget restrictions had her focusing strictly on the main level (not including the bathroom). Both the homeowners and designer agreed the choppy layout should be opened up. “We wanted to be able to see the kids when they were playing,” says Travis. And Jillian was happy when the couple told her they weren’t afraid of colour.

After completely gutting and opening up the space, Jillian devised a design that was in keeping with the age of the character house but also accommodated a family of four and reflected the personality of the young homeowners. She incorporated architectural elements like wainscotting and wide-plank hardwood floors to create a traditional envelope, and then she layered in classic and contemporary items in an eye-catching white and blue colour scheme for an overall comfortable, timeless look. “We wanted to keep it fresh and airy, with texture and pattern adding interest and a sense of whimsy,” says Jillian.

It took about six weeks to transform the space last summer, an amazing feat for this scope of project, and Travis and Talia stayed with family for much of it. “The last time they saw the house was when we were ripping out a hidden chimney and going down to the studs. Then three or four weeks later when they came home, it was completely finished, right down to the flowers and vases,” says Jillian. It’s no surprise that they loved the house and, after a few tears of joy, decided to stay. 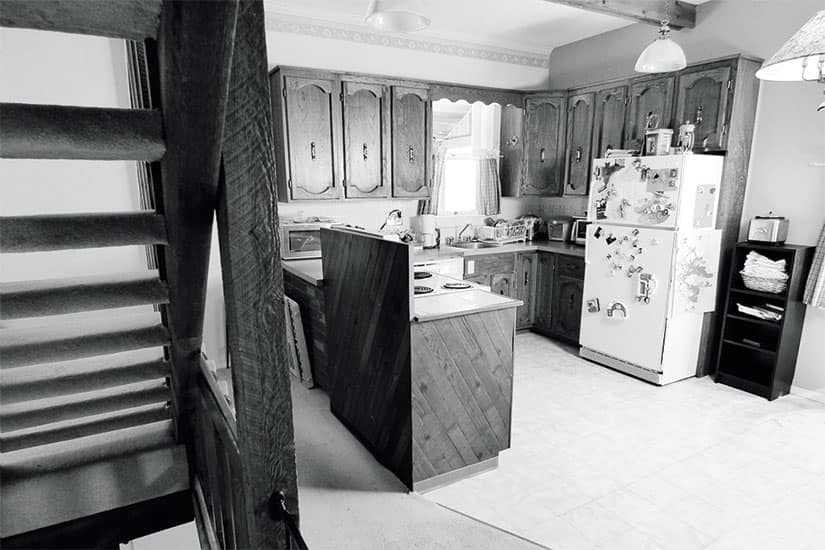 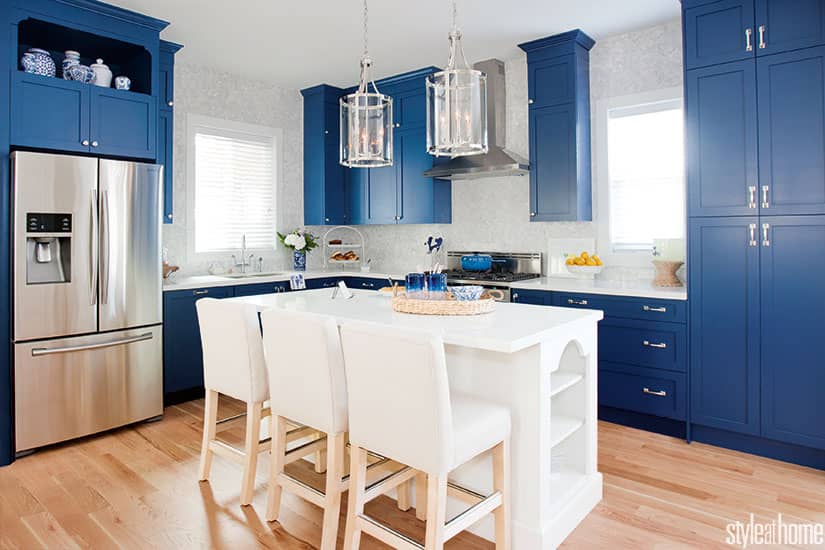 The outdated kitchen, with its heavy dark wooden cabinetry, pea green laminate countertops and broken appliances (“The stove had only two working burners,” says homeowner Travis Clarke), was gutted and updated with Shaker-style cabinetry, quartz countertops, counter-to-ceiling herringbone marble tiles and stainless steel appliances. The white island provides a casual place to dine, separates the kitchen from the family room and balances all the blue. 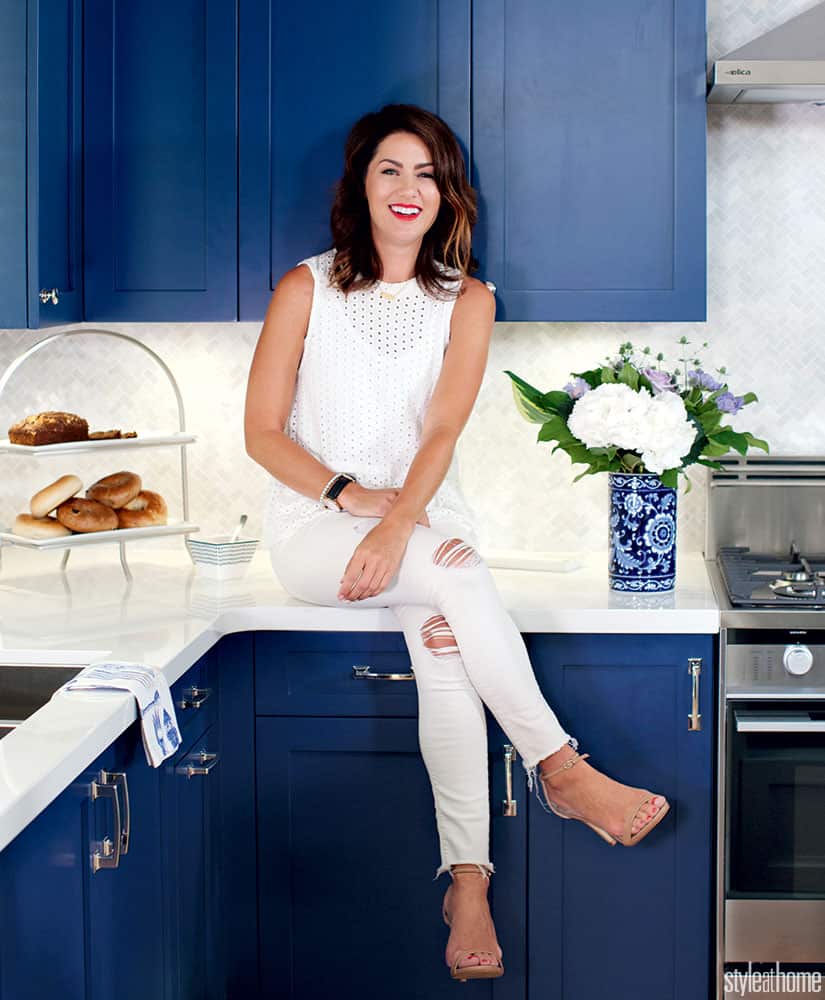 With the homeowners’ blessing to add colour to the house, designer Jillian Harris chose a striking cobalt blue for the kitchen cabinetry. 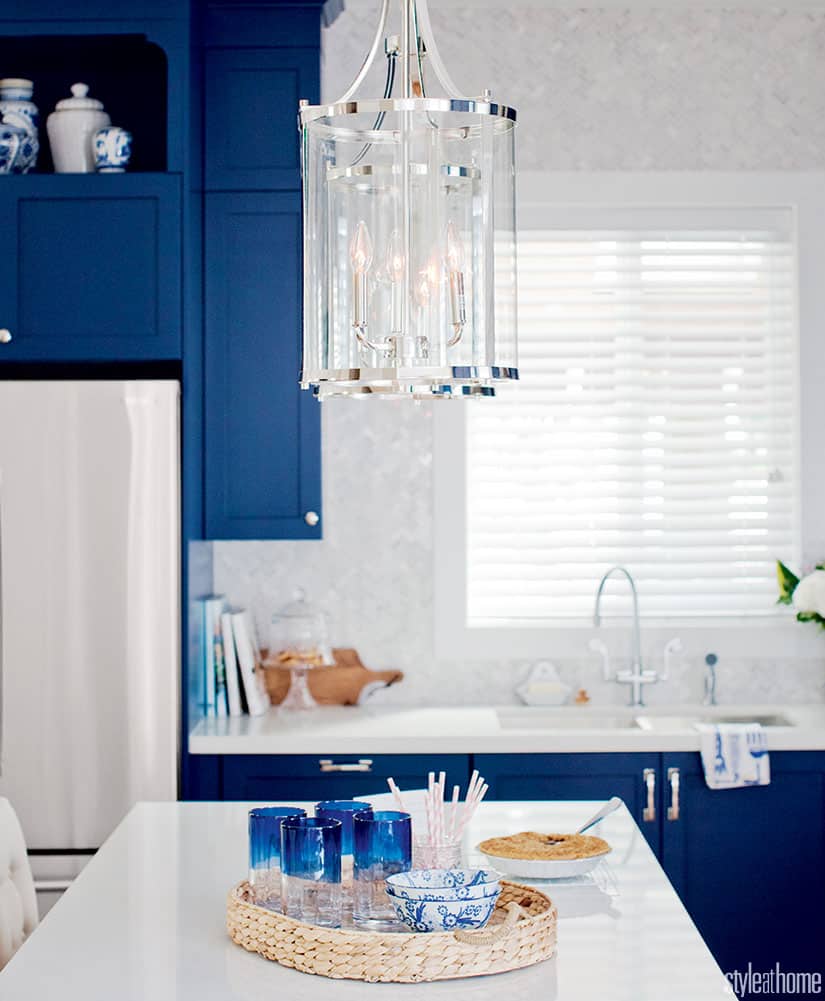 The kitchen’s polished-nickel and glass pendant lights keep the vibe soft and airy. 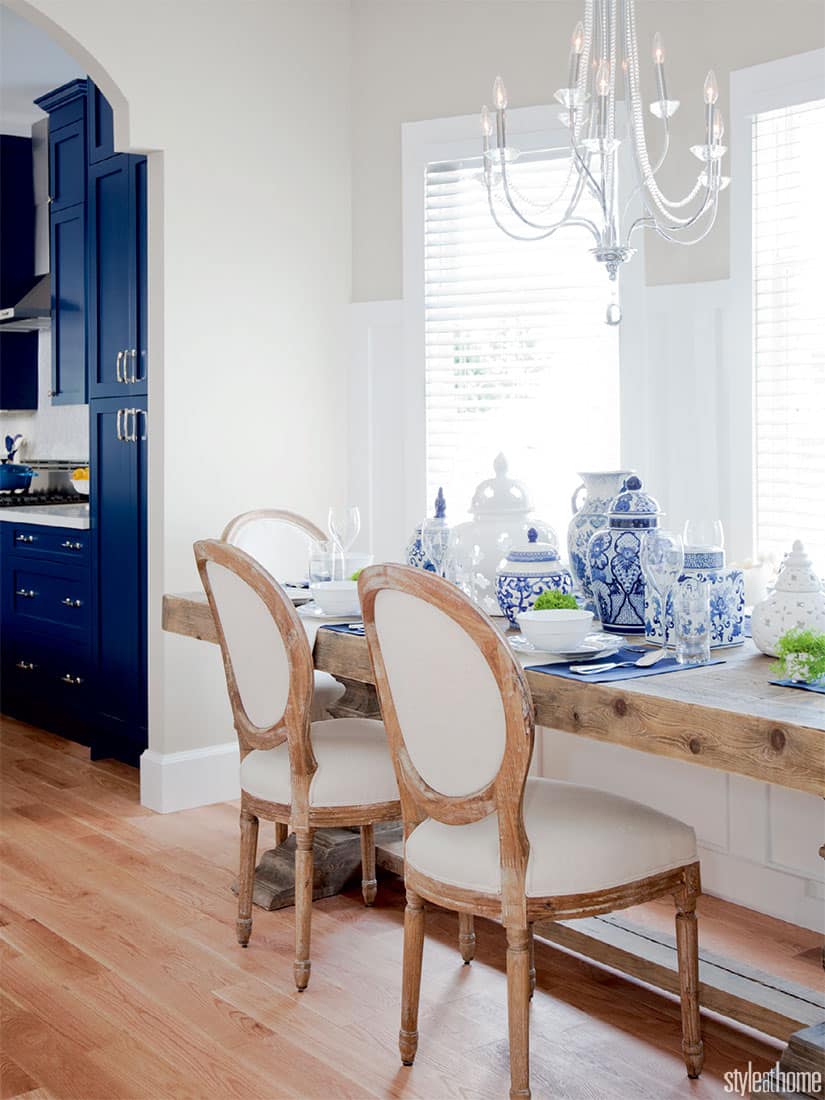 Jillian created an open-concept space by taking down a wall between the kitchen and dining room, removing a hidden chimney in the process. The archway adds architectural charm. 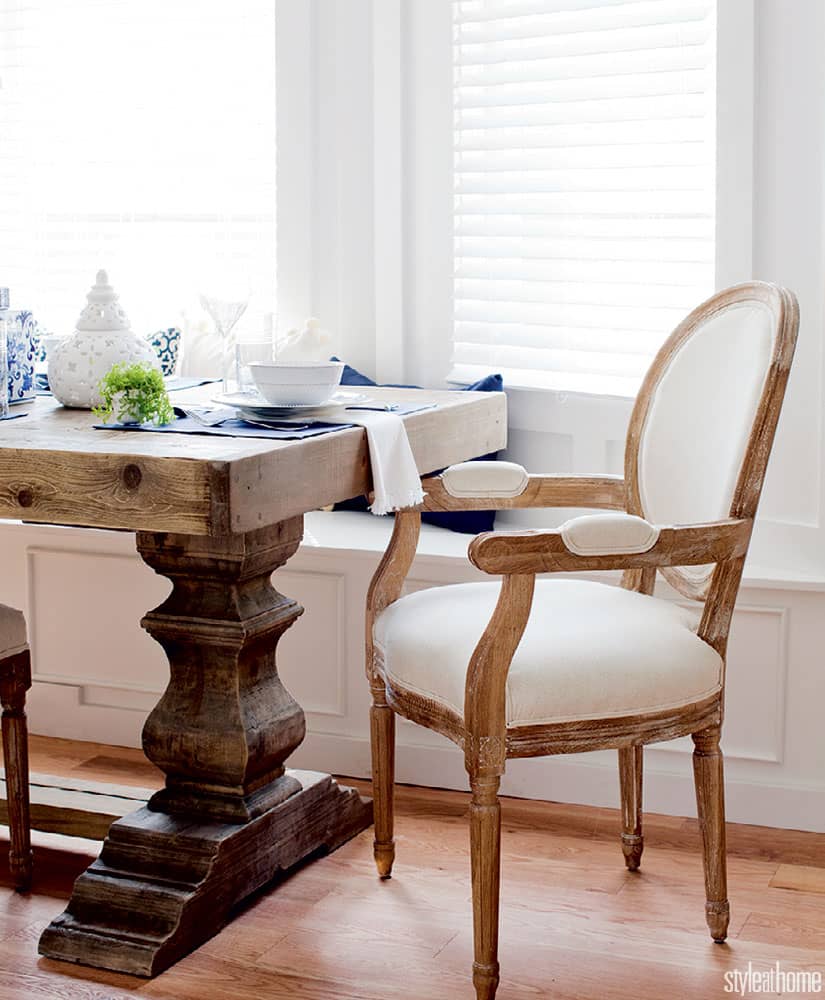 The bay window called for a banquette, which enhances the home’s flow: “Instead of centring the table in the dining area, we built a banquette and pushed the table to the side so there’s a nice clear passage from the front of the house to the back,” says Jillian. 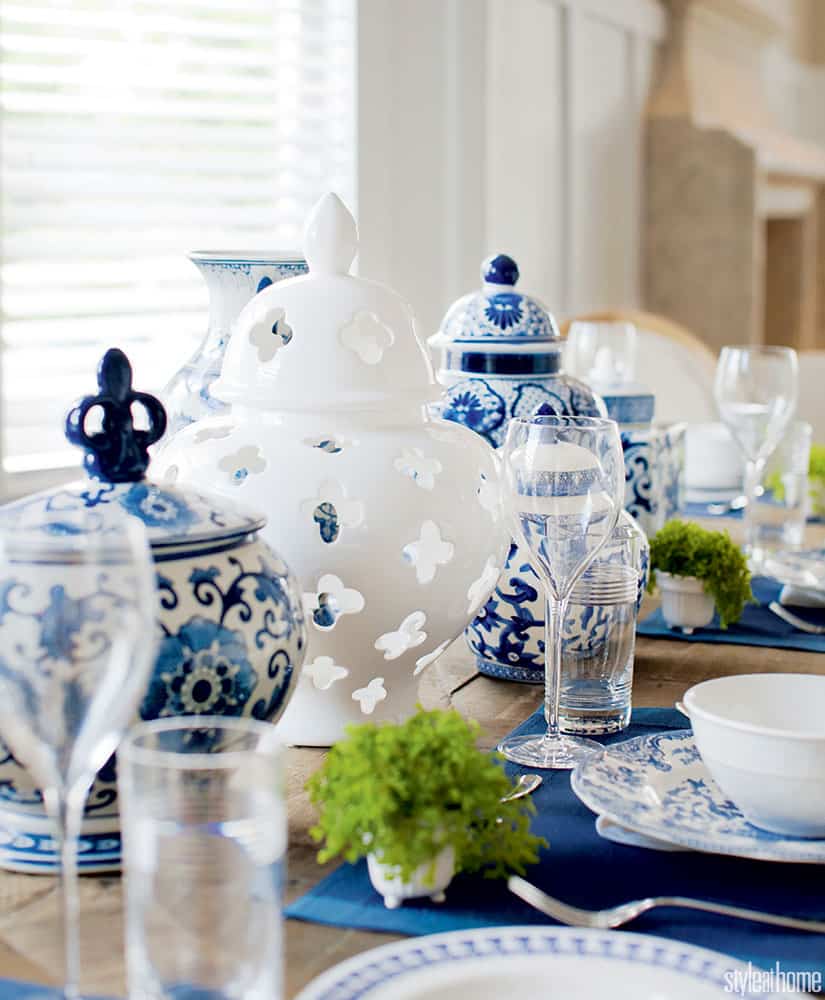 Delft pottery mixed with white ginger jars on the dining table complements the fresh blue and white colour scheme used throughout the house’s main floor. “We collected items over the course of the renovation to give the homeowners some really nice decor pieces, and this pottery adds the perfect hit of pattern,” Jillian says. 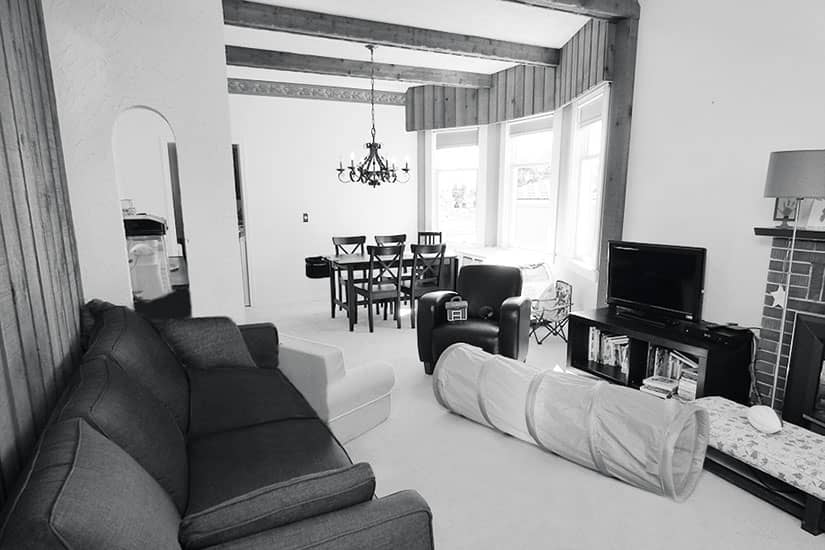 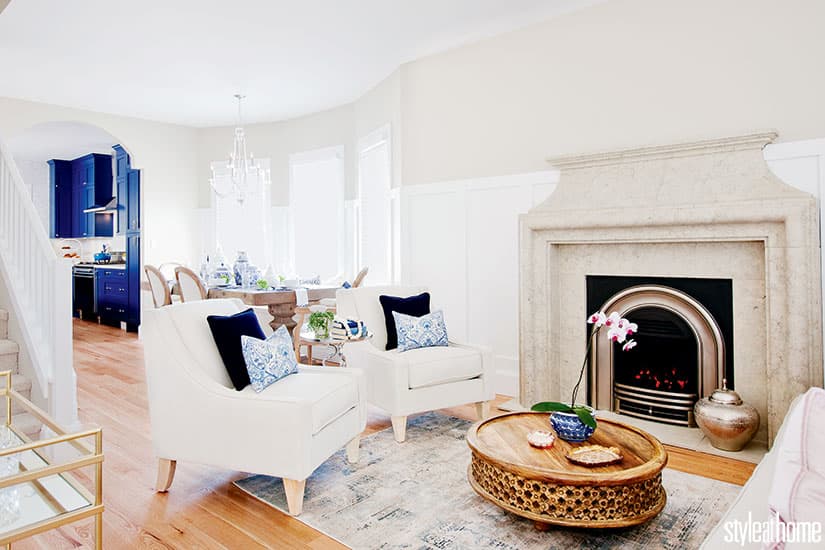 Wainscotting applied throughout the main floor adds architectural interest and is in keeping with the age of the 104-year-old character home. Its clean lines also complement the Shaker-style cabinetry used in the kitchen. A new gas fireplace insert with a substantial concrete mantel replaced an outdated faux brick one in the living room. 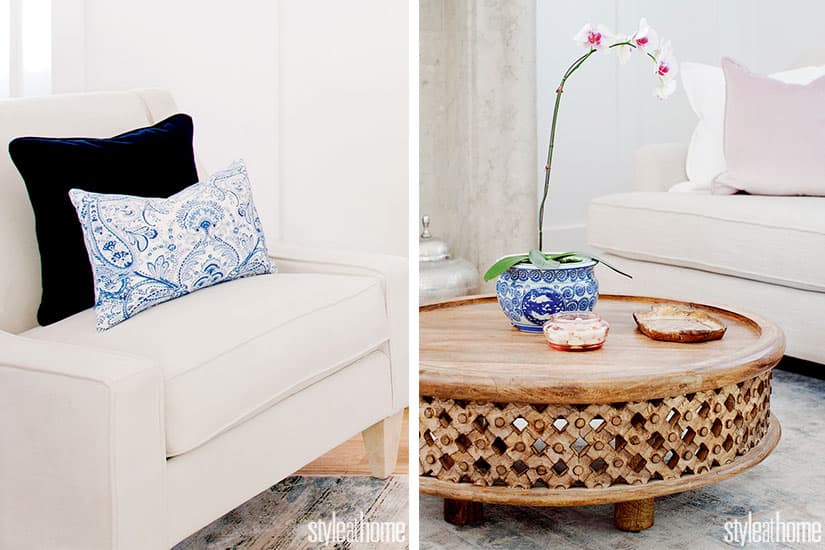 Low-slung with clean lines, the living room slipper chair is the perfect silhouette for the quaint space. A Moroccan-style coffee table adds an eclectic touch and a bit of warmth to the living room (“We added weathered and distressed-wood elements so the house wouldn’t feel too formal,” says Jillian). 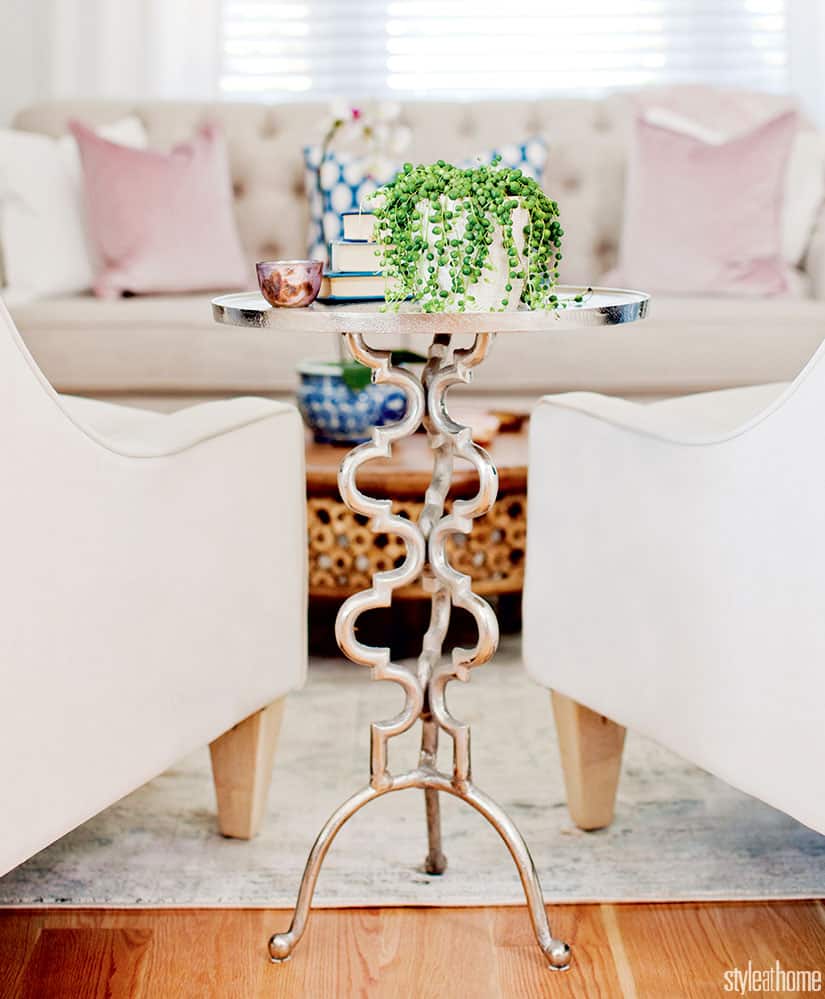 Love It or List It Vancouver co-host and designer Jillian Harris offers a few words of reno wisdom.

1. Best advice
"Before you buy a house that needs renovating, get a quote from a contractor so you know what you're getting into.

2. Most worthwhile investment
“Taking out a hidden chimney was expensive, but it was worth it because it allowed us to create an open layout.”

3. Best out-of-the-box idea
“The homeowners asked for colour, so it was exciting to do something different and give them a blue kitchen.”

4. Favourite budget find
“The extra-long salvaged-wood dining room table. It was a steal, and the homeowners love it!”

5. Biggest regret
“I wish we could have renovated the bathroom on the main floor, just to say one entire level was done.”