Canadian television personality Jillian Harris shares her experience of renovating her dream home in Kelowna, B.C., and falling in love with it all over again.

Jillian Harris, co-host of W Network’s Love It or List It Vancouver, is no stranger to people falling out of love with their houses. Every episode, she transforms a home with the intention of convincing its owners to stay put. The budget-minded designer does this with a keen eye, clear priorities and, as fate would have it, first-hand knowledge. “I’m embarrassed to say I ended up with my own love-it-or-list-it situation,” says Jillian.

While house hunting in the picturesque town of Kelowna, B.C., just over two years ago, Jillian fell in love with the expansive yard, Okanagan Lake view and charming French vibe of this 25-year-old 2,500-square-foot house, which she now shares with her partner, Justin Pasutto, and their one-year-old boxer, Nacho. To her, the place was perfect. It made her heart race. “The lady who used to live here had impeccable taste,” she says. (A picture of the owner meeting Martha Stewart displayed on the mantel sealed the deal for Jillian.) “When I bought the property, I couldn’t think of a single project I needed to do – it was amazing.”

But a week after she moved in, her dream home turned into a nightmare when the in-floor heating system broke. Then Jillian found out that before she could install a new forced-air system, she needed to replace the roof. “It was literally issue after issue within the first month,” she says.

The time came for the big decision. “I knew that with all these problems, I wouldn’t be able to sell the house,” says Jillian. “And if I repaired them, I would never get my money back.” Frustrated and fed up, she decided to go all out with a complete home renovation in order to fall in love with her home again, which meant addressing both the functional flaws as well as the cosmetic concerns that had developed after the honeymoon phase.

In a four-month renovation (which Jillian pre-planned and Justin project-managed while she was in Vancouver filming the TV show), walls were taken down, rooms were reconfigured and tiny windows were replaced with bifold doors to open the house up to the lake views. The resulting airy spaces were enhanced with a light and crisp neutral colour scheme of white and pale grey.

The kitchen was updated with quartz countertops, a farmhouse sink, polished nickel hardware and
a coat of white paint on the existing cabinetry (custom cabinets were also added). A mix of traditional, modern and antique furnishings juxtaposed with the home’s architectural bones – wainscotting, crown moulding and coffered ceilings – creates a romantic, eclectic look that’s timeless.

While indisputably behind every design decision, Jillian didn’t see the house until a dramatic reveal. “I said to Justin: ‘Please, please, please tell me the countertops are going to be installed in time for Christmas,’” says Jillian. “When he said no, I was so upset. Then I went home to check on the progress, and the entire house was completely done with flowers set up and candles lit and the coffee machine installed. I was speechless!” It was undeniably a “love it” moment. 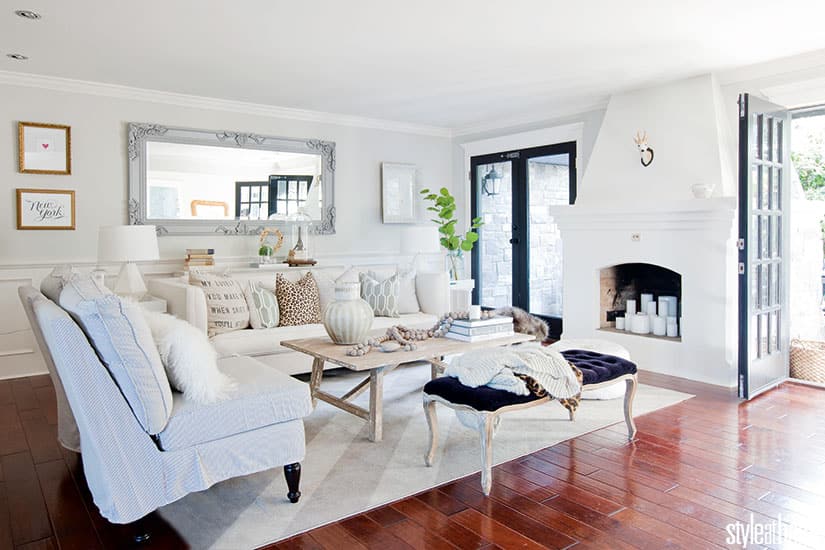 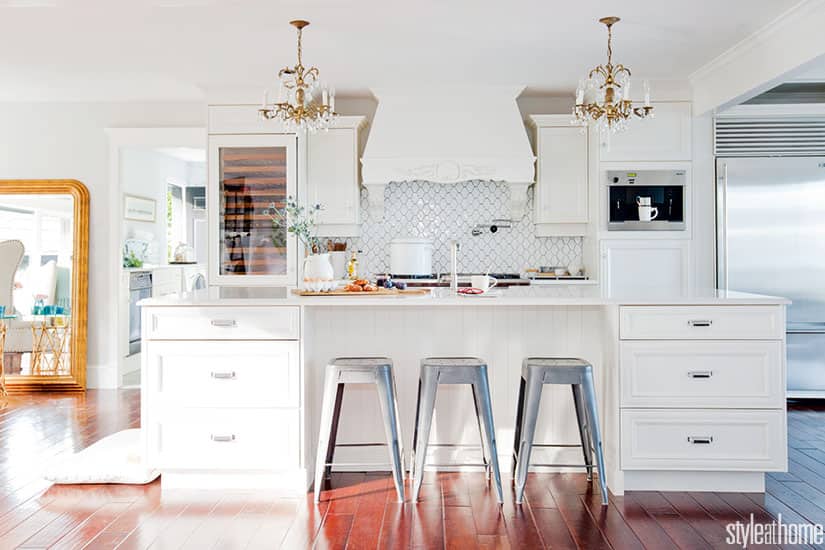 Jillian opened up the kitchen by taking out a wall between it and the dining room. "Now I can see the lake when I'm standing here in the kitchen," she says. To create the clean all-white space she wanted, Jillian had the orange and black granite countertops replaced with white quartz, which offers the look of marble without the maintenance. She also had the existing cream cabinetry painted white and changed the wrought-iron hardware for polished nickel. The new Moroccan-style backsplash adds pattern and shine. 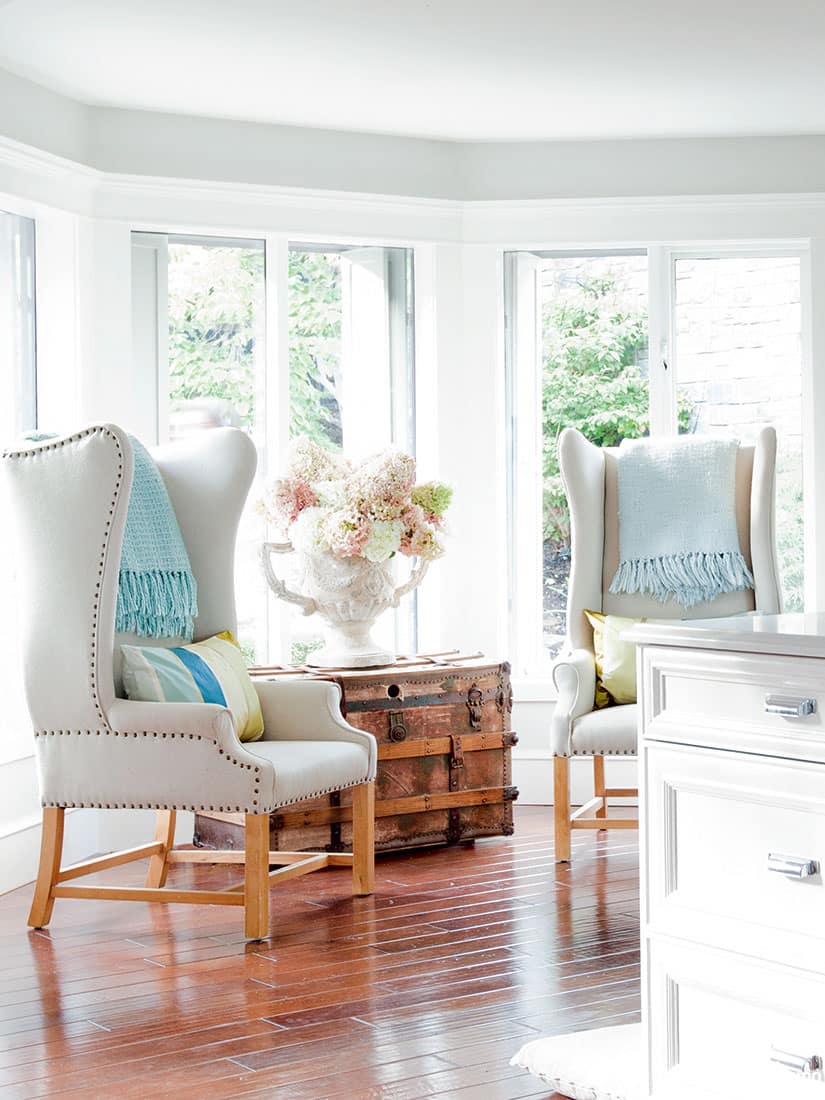 Instead of placing a table in the kitchen's eat-in area, Jillian created a cozy sitting nook. "We're not big sit-down-at-a-table people. So we kept the formal dining space at the front of the house and then decided to go with a little seating area back here, and it's used quite often." 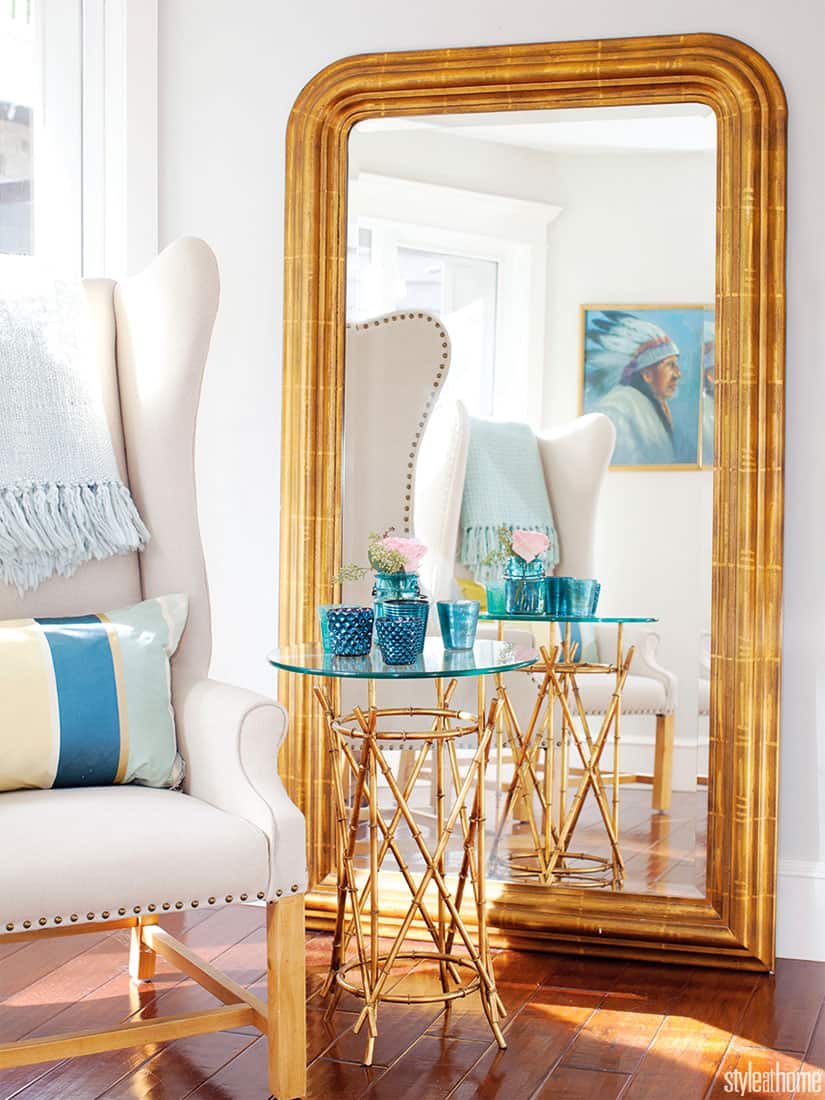 In the kitchen's sitting nook, a wood-framed floor mirror with a gold-coloured finish adds interest. "I love the Art Deco look of it," says Jillian. "It has such a different feel than anything else in the house." 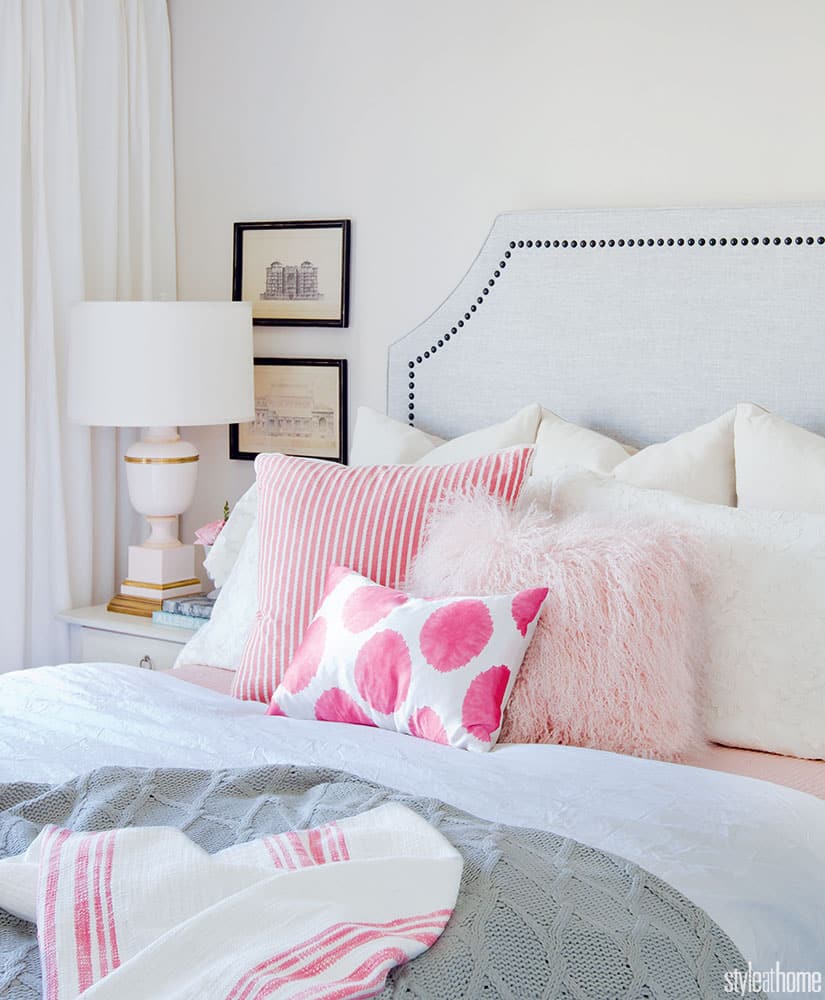 A pink, grey and cream colour scheme gives the guest bedroom a pretty, feminine look. "We call it the pink palace," says Jillian. "I actually love pink. I would have the entire house in grey and pink if I could. But when you're living with a male, sometimes that's not always possible. So I decided to make this room pink." 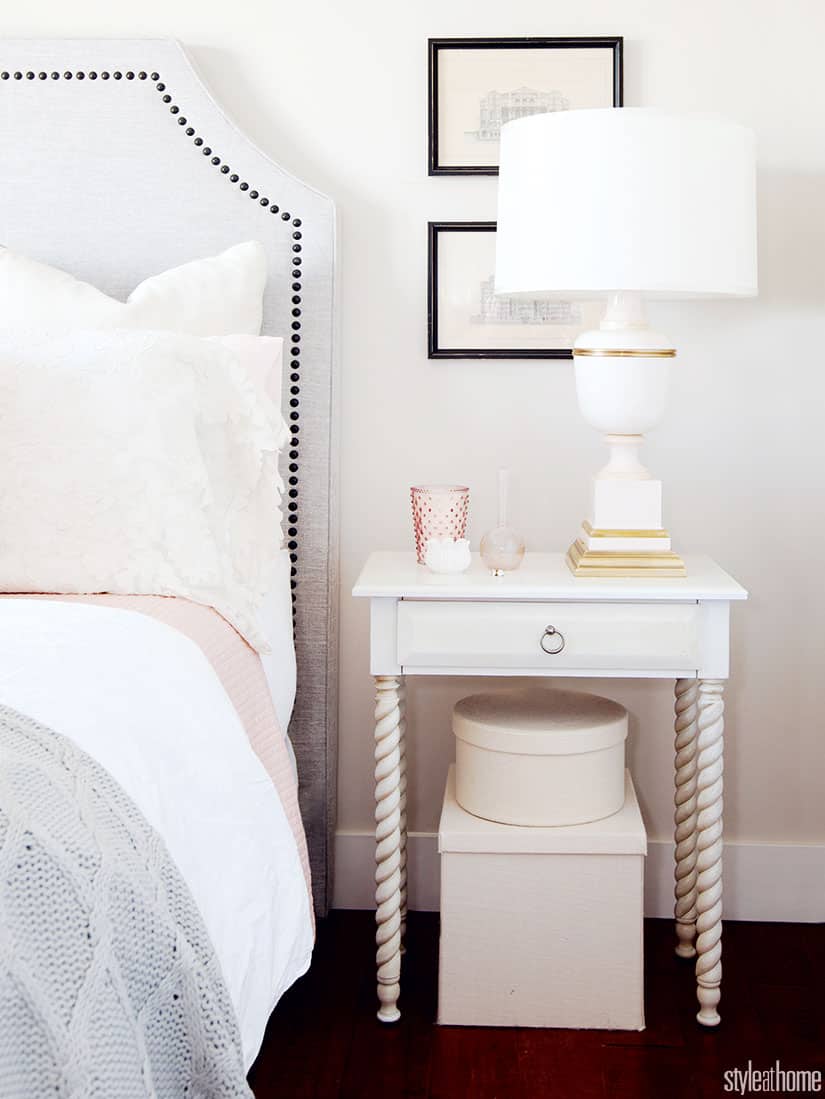 The soft pink and gold table lamp in the guest bedroom boasts a sophisticated, timeless quality. 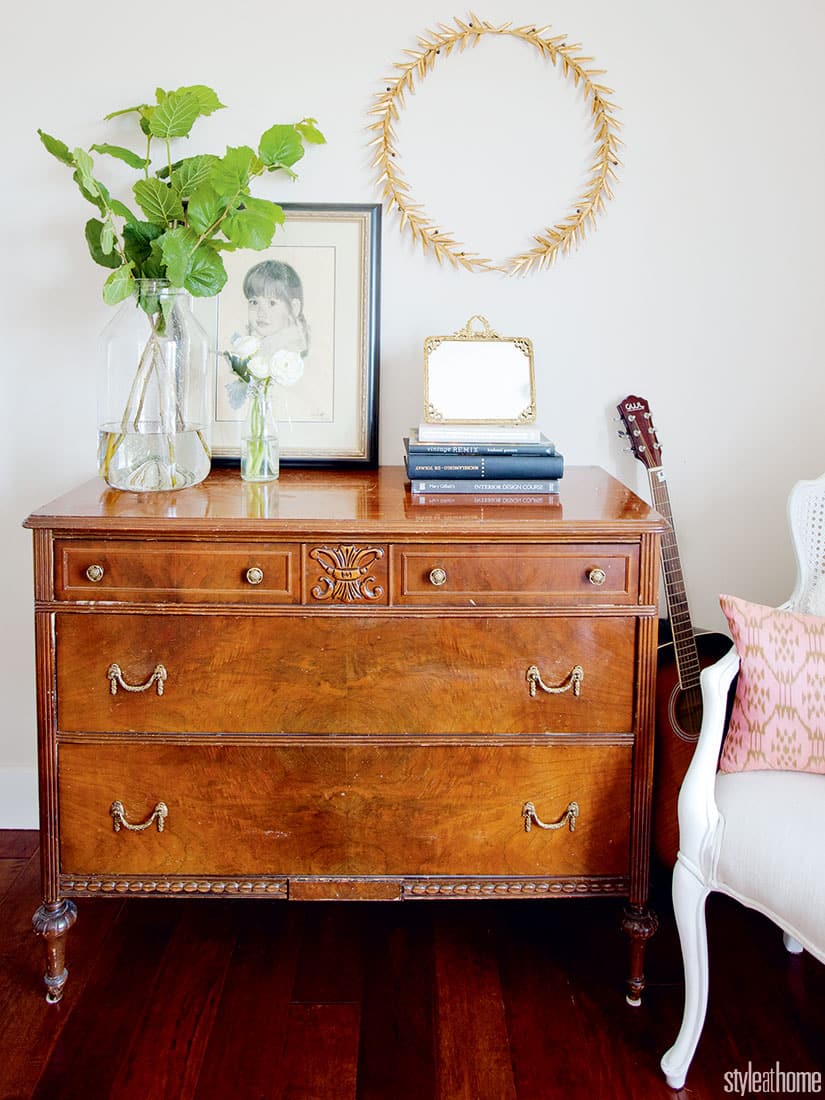 An antique dresser handed down from Jillian's—her mother got it in her early 20s—lends character to the guest bedroom. The portrait, drawn by an Alberta artist, depicts Jillian as a young girl. 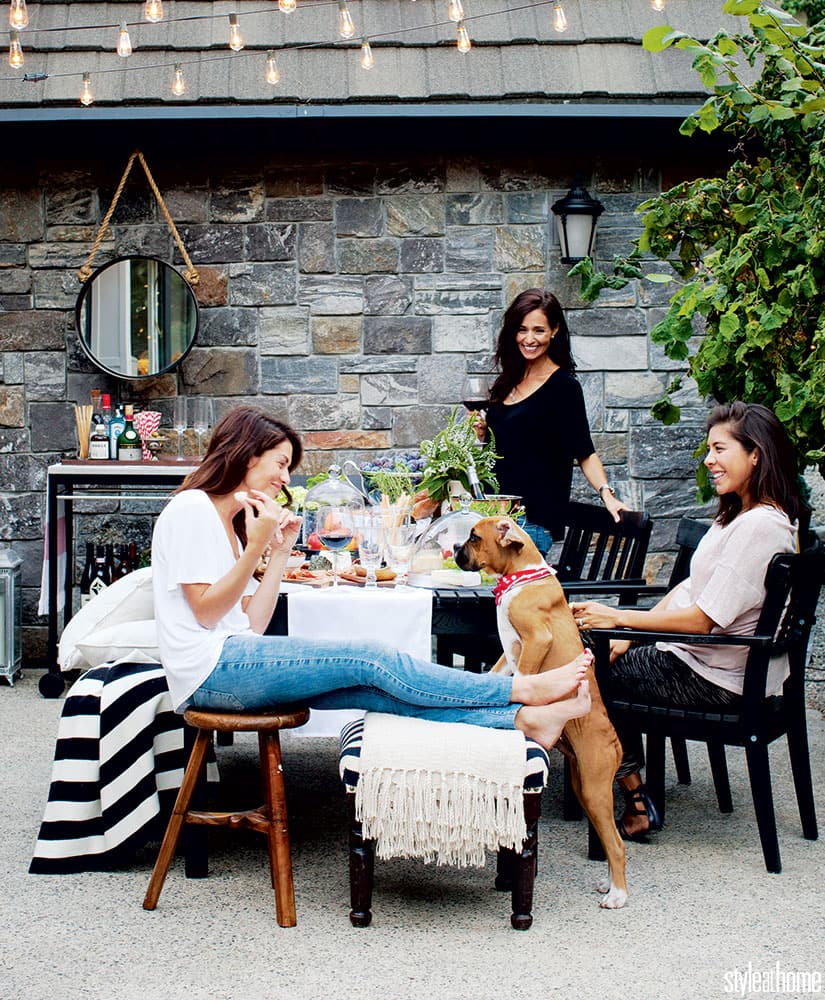 Jillian gave the outdoor dining room area an inviting look by layering in soft elements like toss cushions and throws. 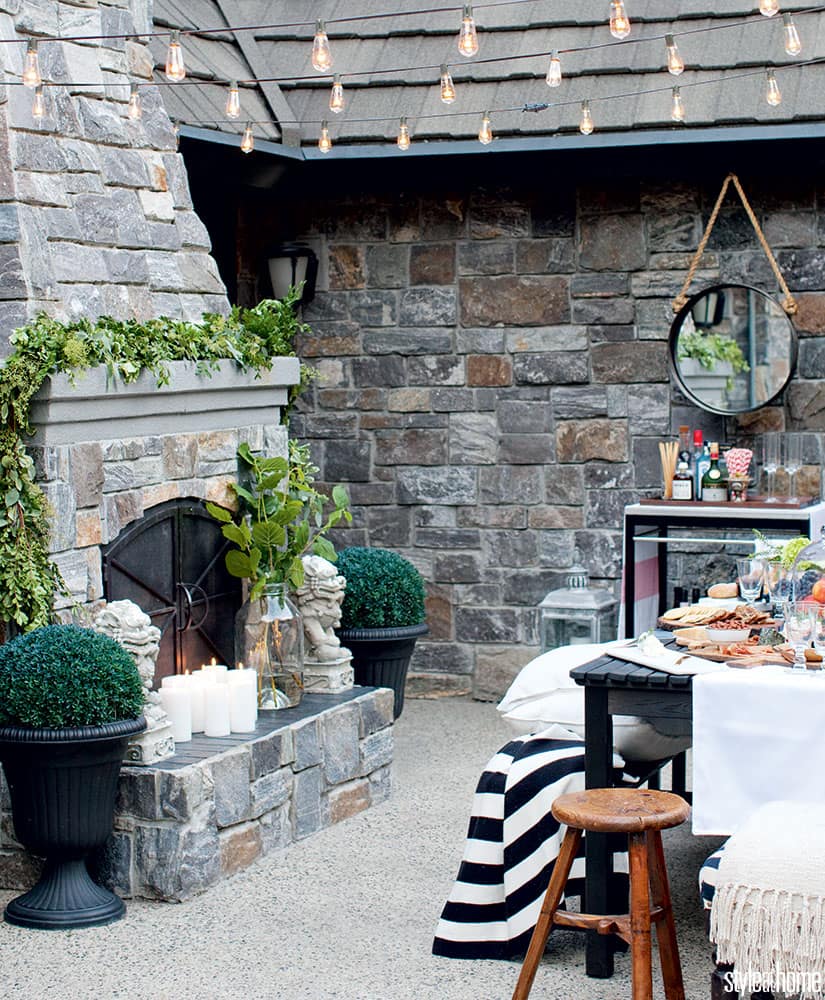 Illuminating the outdoor space with candles and string lights adds warmth and romance. 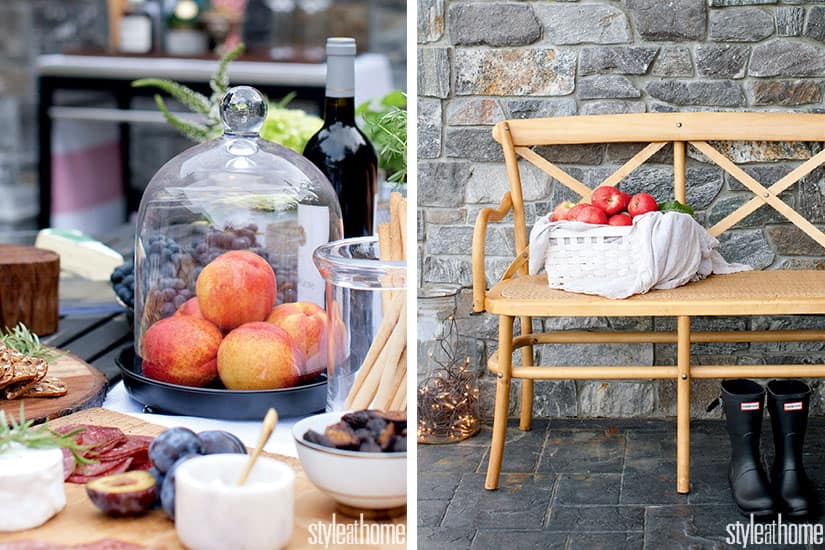 A variety of cutting boards offers an interesting alternative to platters when Jillian serves a delicious spread of cheeses, fruits (the green grapes come from her own vines), breads, charcuterie and jams during summer backyard get-togethers.

1 Layer the lighting: "Lighting is as important outside as it is inside. I created a layered effect by hanging filament bulb string lights, wrapping a couple of trees with twinkle lights, adding lanterns and putting candles on the table and fireplace.

2 Incorporate textiles: "I put a runner on the table and throws and toss cushions on the chairs, and even brought out an upholstered ottoman from inside. It warms things up a little bit and adds softness."

3 Add greenery to complement your surroundings: "I hung a simple boxwood garland on the fireplace mantel and placed clippings from around my yard in vases and Mason jars."

4 Create an outdoor bar: "It allows people to make their own cocktails and also gives a real swanky look to your party. I just used a basic bar cart, a nice tray and some classic liquers."

5 Hang artwork: "I've always loved putting mirrors outside. It really brings the inside out and gives the impression that your backyard is an extension of your living space. I look for cool inexpensive vintage art or metal mirrors that I can hang on the side of the house or fence."