A Toronto couple transforms a once-dilapidated circa-1955 ski cabin into a beloved family getaway that’s also a marvel of Mid-Century design.

"We love everything Mid-Century Modern,” says one of the homeowners of this Swiss-inspired ski cabin in Collingwood, Ont. The couple loves it so much that when they first spied the 1955 beauty, it made an impression that remained on their radar. “It’s next to the place we’d been renting for three years, so we watched it closely,” says the homeowner. The parents to three ski-racing teenage boys finally made an offer in 2015. “We fell for its exterior architecture, original fireplace and large windows facing the slopes.” In ski terms, though, its amenities were more bunny hill than black diamond. “It had a tiny kitchen tucked behind a wall, a dirt floor in the basement, outdated electrical, you name it – but we felt we could make it our own.”

A friend referred the family to local custom-home builder Blake Farrow, who introduced them to his wife, Marina, a designer at Farrow Arcaro Design, and architectural technologist Adam Vokes. Together they all set about transforming the 1,700-square- foot space, beginning with a down-to-the-studs reno. When the rebuild was complete and the open-concept main level in situ, the decorating fun began.

“My wife and I are incredibly decisive, and the Farrows could see our passion for design,” says the homeowner. “In fact, Marina was really excited about our vision, which wasn’t the typical ski chalet look.” Indeed, one of the jumping-off points was the dining room’s new vibrant retro-style wallpaper. “I wanted colour and pattern that looked like it was actually from the 1960s,” he says. “I sent Marina images of wallpapers I found online, and she went from there to source the perfect one.” The paper is complemented by the space’s high-end flooring. “It’s a beautiful rich walnut and a definite splurge, but the main level is relatively small, so we didn’t need that much of it.”

For sourcing on a dime, the internet proved to be the couple’s best friend. “I spent six months scouring antiques stores and eBay for items, which is cost-effective since you only bid as high as your budget allows,” says the homeowner. They scored many finds (everything from all of the cabin’s original ’50s artwork to the front-door knocker) but point out that each piece was thoughtfully chosen, which is in keeping with the personal provenance of the many furnishings here. “We wanted to incorporate pieces we’ve collected over the years, such as our Eames chair, which would be a staple in any Mid-Century lover’s home.”

There’s another piece in the cabin that fits the bill: the old-school Bang & Olufsen record player. Its bright yellow hue punctuates the breezy open main floor, which invites entertaining. “My wife and I can accommodate a lifetime of family and friends here, enjoying time together on and off the slopes.” When they revealed it to their teenagers on Christmas Day in 2015, “They were amazed. It’s become our favourite place to spend time together as a family.” 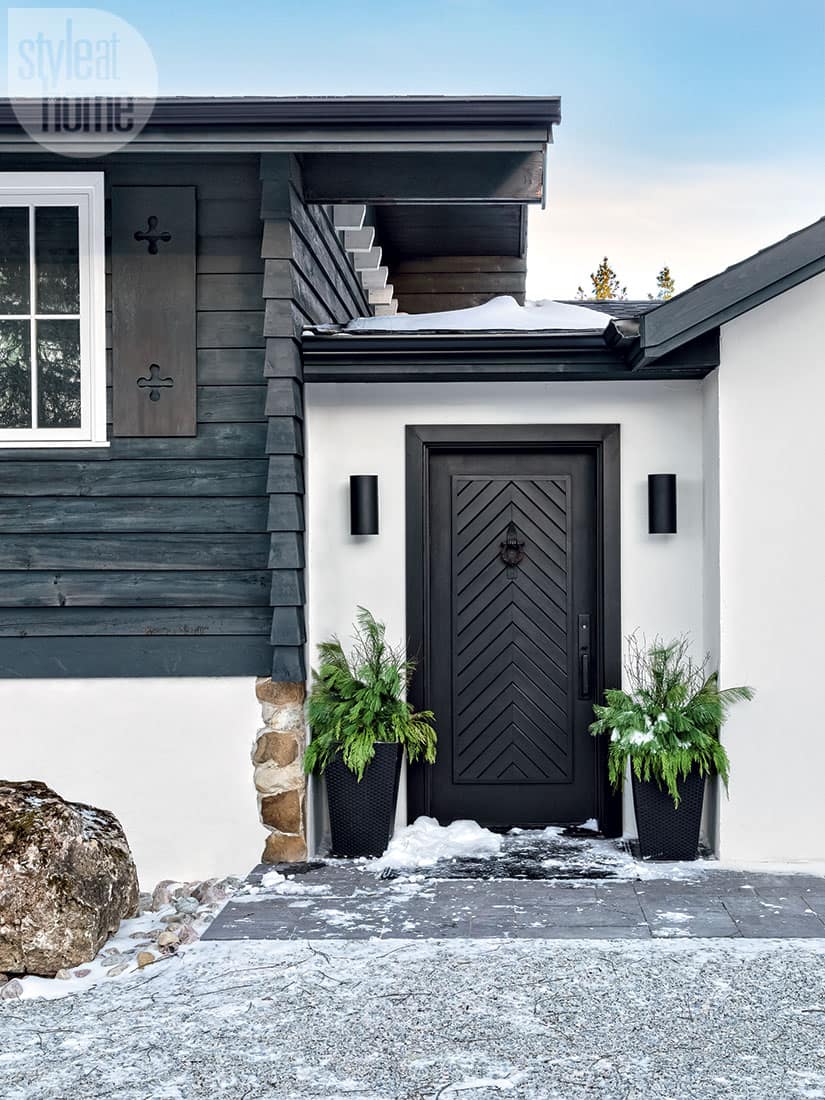 The solid wood front door is a remake of the original, which wasn’t as substantial. 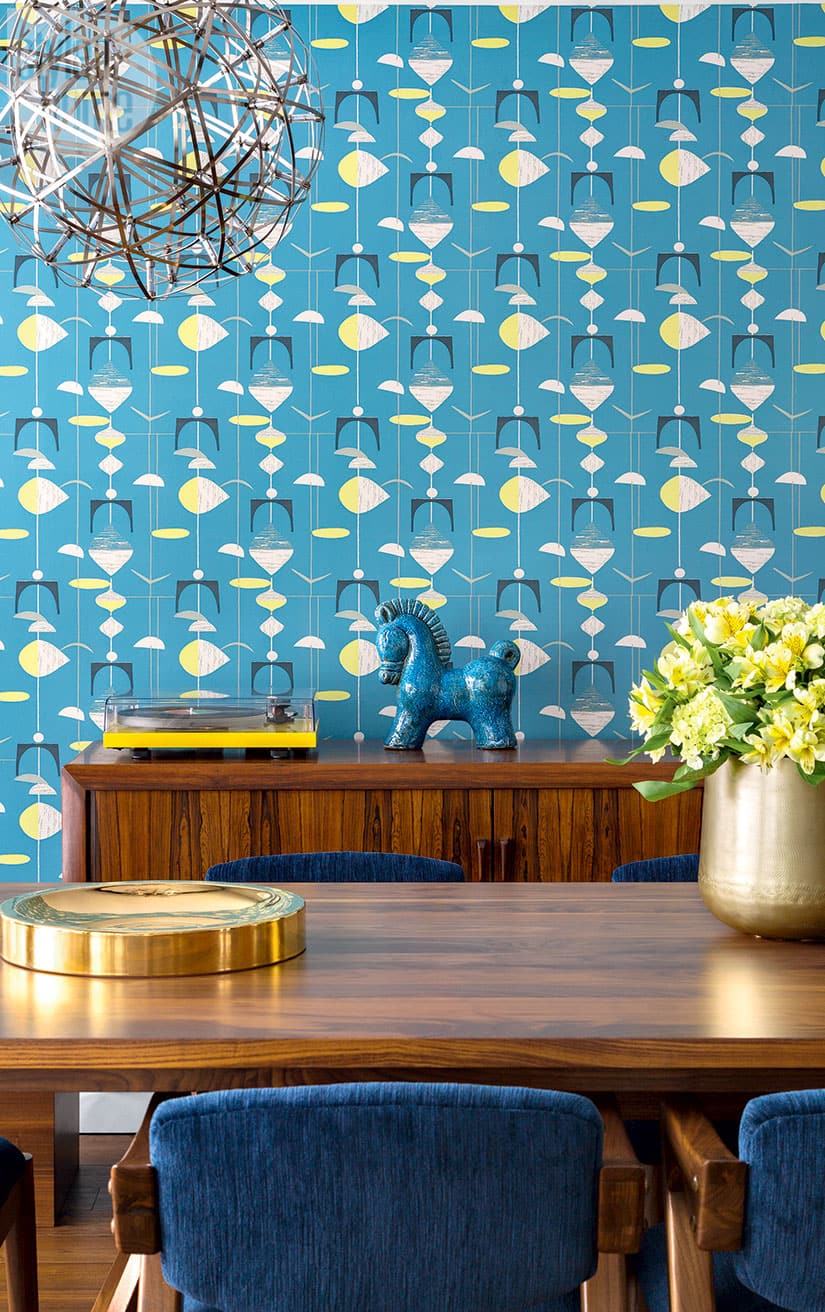 The retro-look wallpaper was the inspiration for the main floor’s colour scheme. The sideboard, a splurge from a Toronto antiques store, displays mod accessories like the ceramic Bitossi horse (an eBay find) and rad yellow record player. 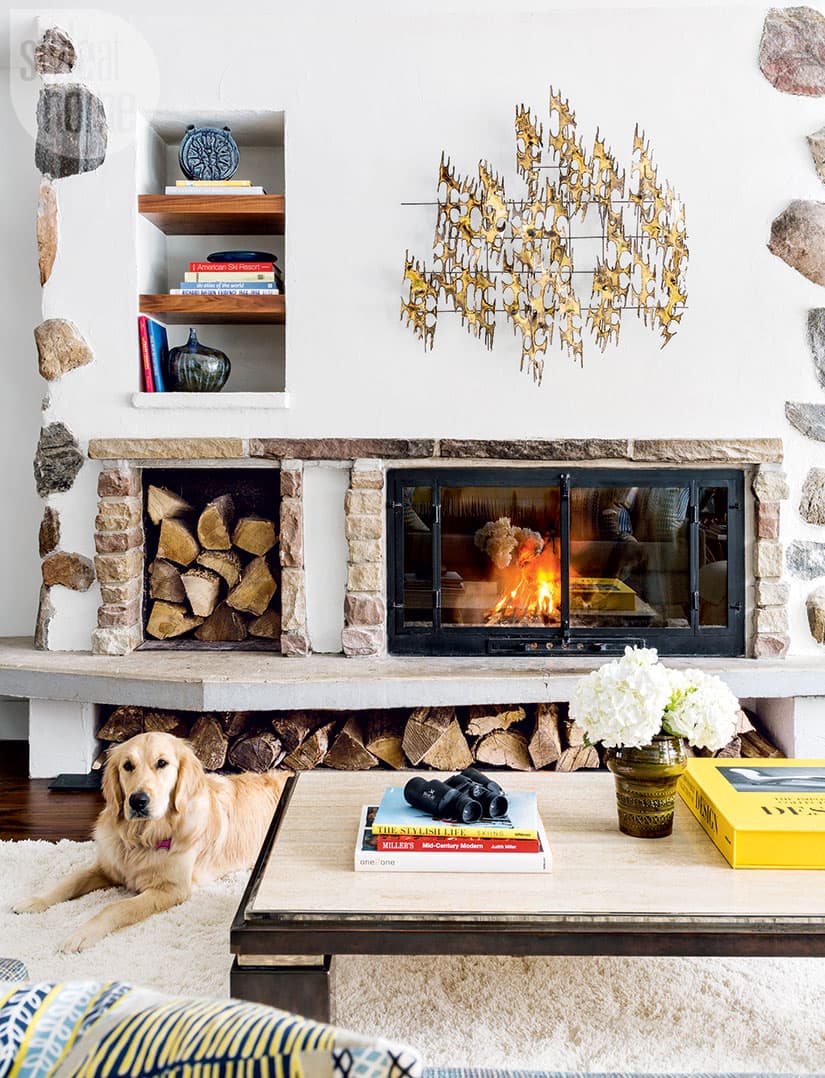 The family’s golden retriever, Isobel, warms up by the living room fire. “The fireplace is one of the main reasons we love this cabin,” says one of the homeowners. “Every effort was made to keep it and its surrounding nooks exactly as we found them.” They refreshed the stucco and added a piece of steel to accommodate more firewood storage. 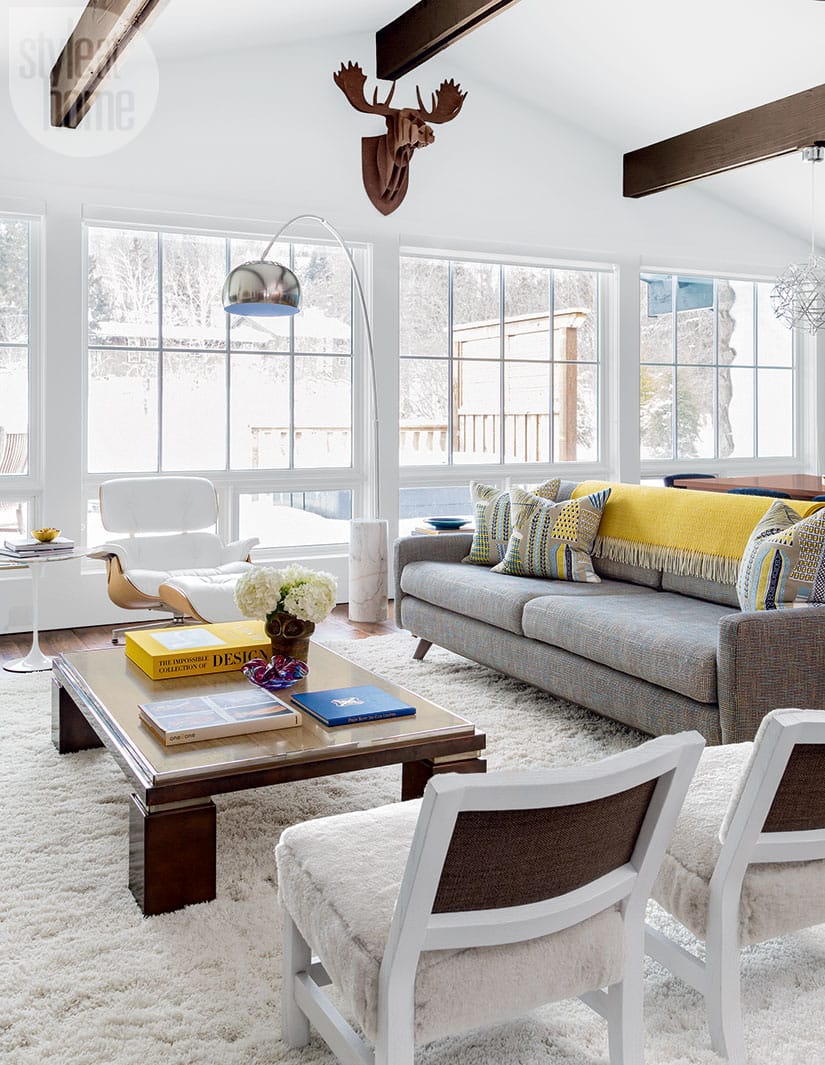 “In the living room, we had to think about how Mid-Century design meets chalet style,” says the homeowner. A plush white rug and shearling-upholstered chairs say ski lodge, while the Eames lounger and Saarinen side table are iconic Mid-Century Modern. The homeowners also introduced another treasured piece. “We purchased the 1960 marble-topped coffee table in Greenwich, Conn., years ago. It had been in storage, waiting for its perfect place.” 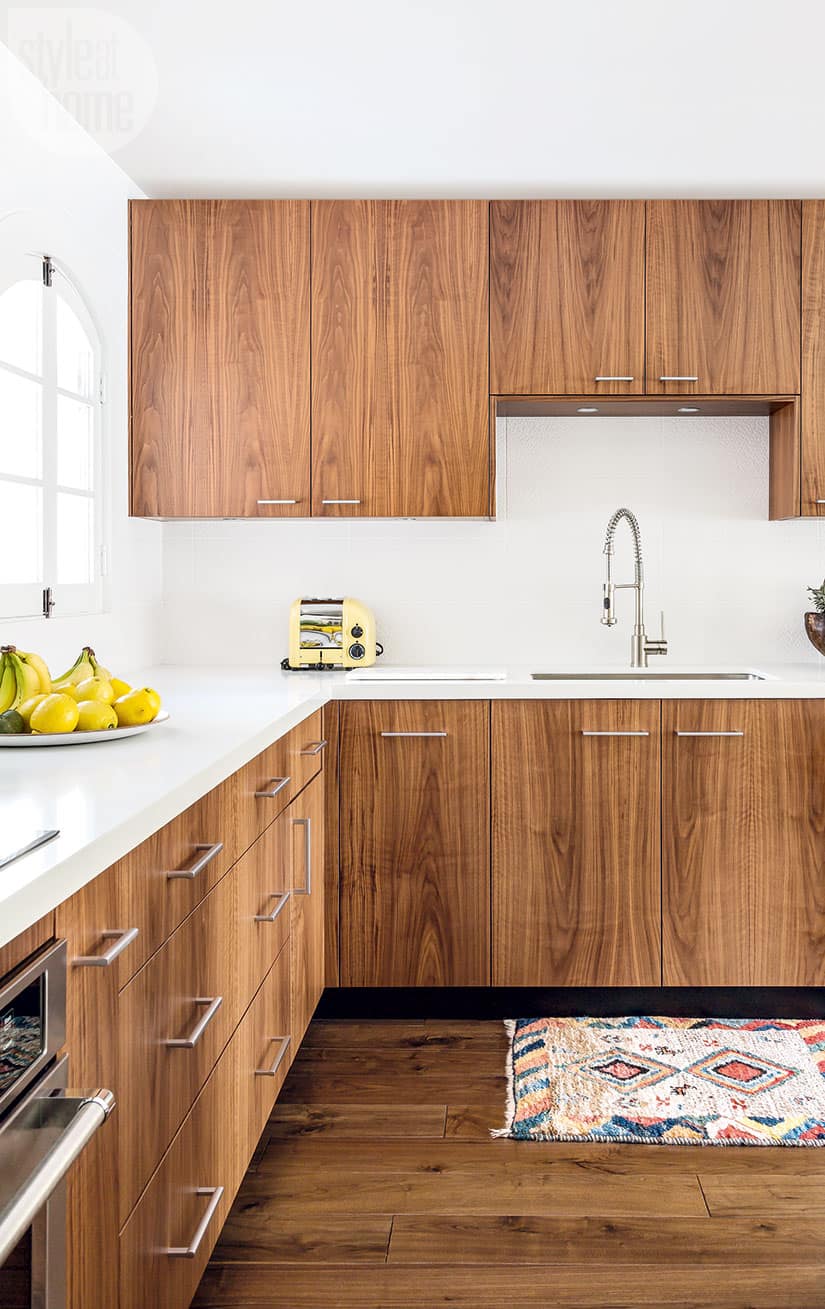 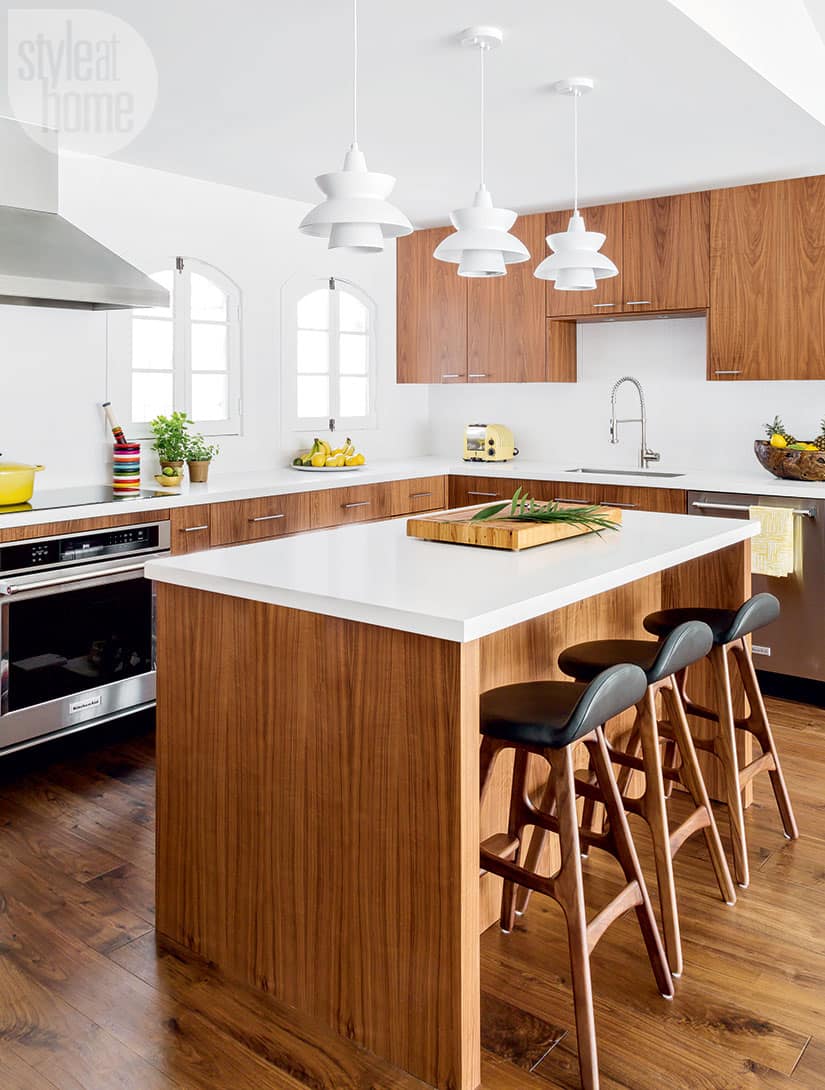 The kitchen’s simple white back­ splash lets the warm walnut cabinetry stand out. “There couldn’t be any other cabin­etry choice but walnut for lovers of Mid­-Century Modern design,” says the homeowner. The stools look vintage, and their low profile means they can easily tuck beneath the Caesarstone countertop. “The island is the gathering spot for wine and cheese, and it’s also our breakfast counter before a day of skiing.” Citrus­hued accessories are continued from the living and dining areas. 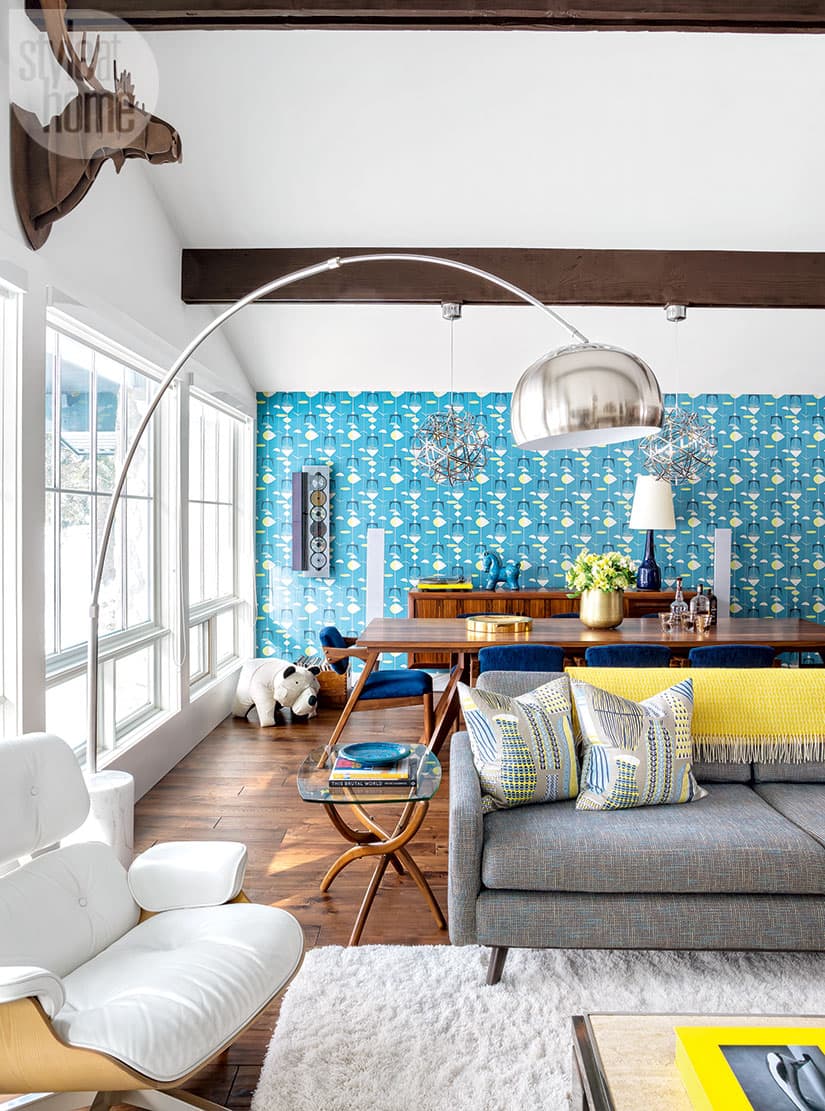 "We really wanted a moose head but grappled with a taxidermy route, so we started looking for carved wood alternatives,” says the homeowner. They found this one, which is made up of pieces that fit together like a puzzle. “We love how it’s perfectly at home against the original beams in the living room.” The new sofa was covered with vintage-look fabric and accented with zings of yellow that are echoed throughout the first floor. The classic Arco floor lamp provides ambient lighting. 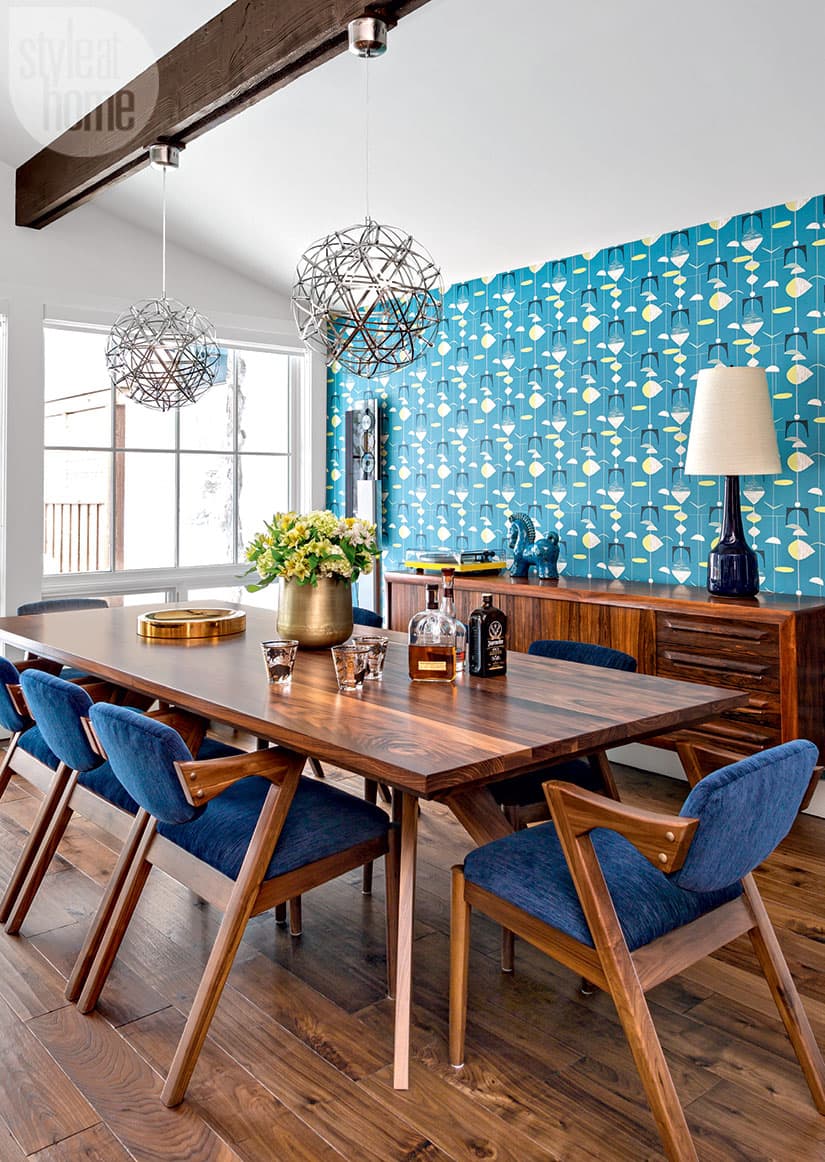 New metal pendant lights sourced by designer Marina Farrow illuminate the locally crafted dining table. “Mid-Century homes didn’t typically have tables to fit a large crowd for dinner, so we created one using the materials and design of vintage styles,” says the homeowner.