In this from-the-ground-up project, BattersbyHowat Architects delivers a minimalistic yet cozy common area for a family of four.

The term "cozy modern" may sound like a bit of an oxymoron to most, but to David Battersby and Heather Howat of architecture and design firm BattersbyHowat Architects, it's almost a mantra. "Modern doesn't have to mean cold and repelling," says David, who, along with Heather, has designed many spaces that reaffirm the fact. And that's precisely why these homeowners – a pair of lawyers with two preteen children – hired the firm to design and build their 3,900-square-foot Vancouver house from the ground up. "They wanted a contemporary space they would feel comfortable in," says David. "And after they toured some of our previous projects, they knew we could deliver the style they sought."

Since the homeowners’ former abode was getting demolished to make way for the new one, they had a clear idea of how to take advantage of the sloping site. “Our clients knew they wanted an open-concept living space on the main level of a three-storey structure that would showcase the surrounding scenery,” says David. “So while you enter the front door at grade, by the time you get to the back of the house, you’re almost a full storey above ground.” This spells stunning views from the living room and kitchen, where the family spends most of its time, lounging, cooking and doing homework. “It was essential for us to have a place that would encourage our kids to stay and hang with us rather than retreat to their rooms,” says one of the homeowners, who also wanted a large area for entertaining their extended family.

The open-concept main floor delivers just that, from the 12-seater dining room and the strikingly expansive kitchen (with its whopping 17-foot-long island and cozy eat-in nook) to the light-filled living area, where the family enjoys spotting eagles soaring by through the huge windows. "The living room is so bright, we barely ever turn the lights on in there," says one of the homeowners. “We never appreciated the moon or the changing sky as much as we have from that sectional. It just begs you to sit down and stare outside.”

An abundance of natural light was necessary to the overall design – especially since Vancouver winters can be so dreary – so glass panels stretching from the basement to the top floor were installed on either side of the house. Other modern architectural features include the wooden staircase hidden behind a sculptural slatted screen and a sleek gas fireplace surrounded by cement slabs (the top half had to be poured on-site) and flanked by crisp white cabinetry.

“At extended family dinners, the kids and their cousins play with trains or Lego on the fireplace’s cement hearth,” says one of the homeowners. “There’ll often be a group of adults chatting and watching from the sectional, as well as another gathered around the kitchen island.” And that’s not a coincidence. With clear sightlines across all its main living areas, this home is meant to prompt a feeling of togetherness, despite its sprawling size. It’s spacious yet intimate, contemporary yet cozy – and that’s all by design. 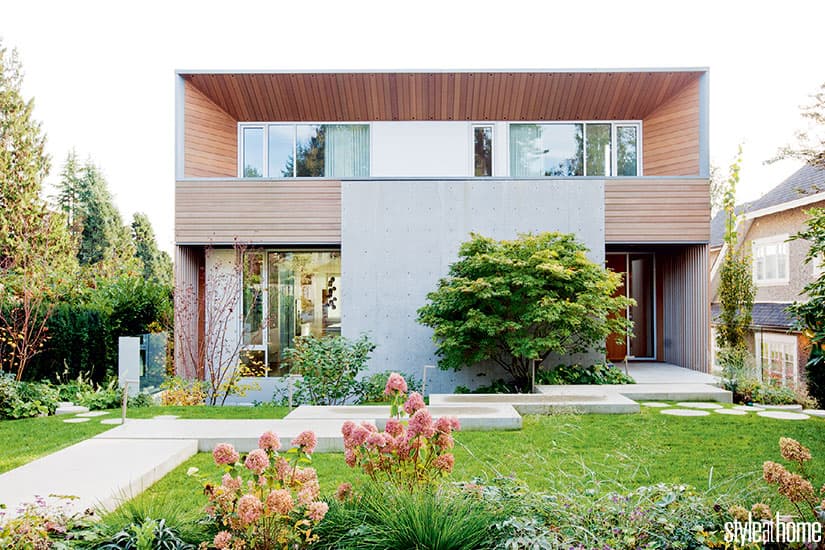 David describes the style of home that he and Heather designed as West Coast modern. The mix of glass, cement and wood on the front delivers a quiet but statement-making modernism. On the top floor, recessed windows with extended side walls that angle outward add a feeling of privacy. 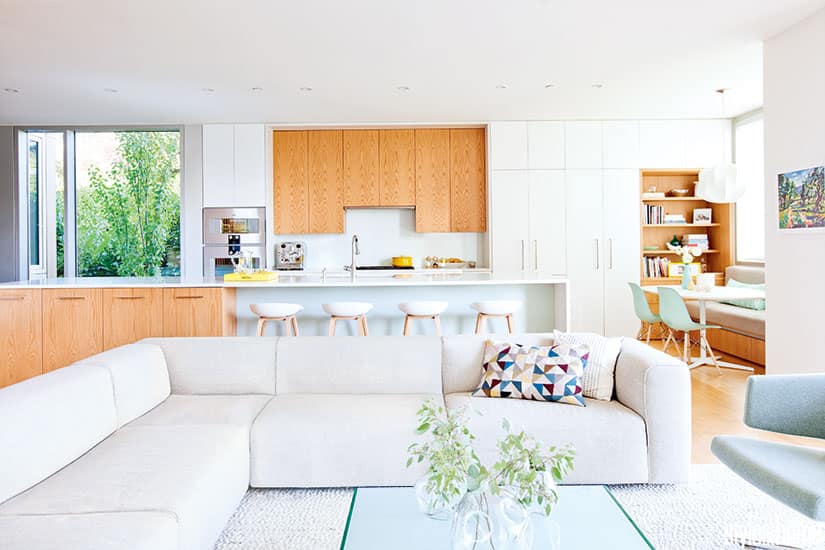 Subtle colours in the pale blue back-painted-glass backsplash and island base, as well as the turquoise accents in the eat-in area, soften the sleek white kitchen, while oak cabinetry warms it up. Having open shelving in a few intimate places, such as the eat-in area, gives the homeowners an opportunity to display favourite items and family photos, but keeps the open-concept space feeling far from cluttered. 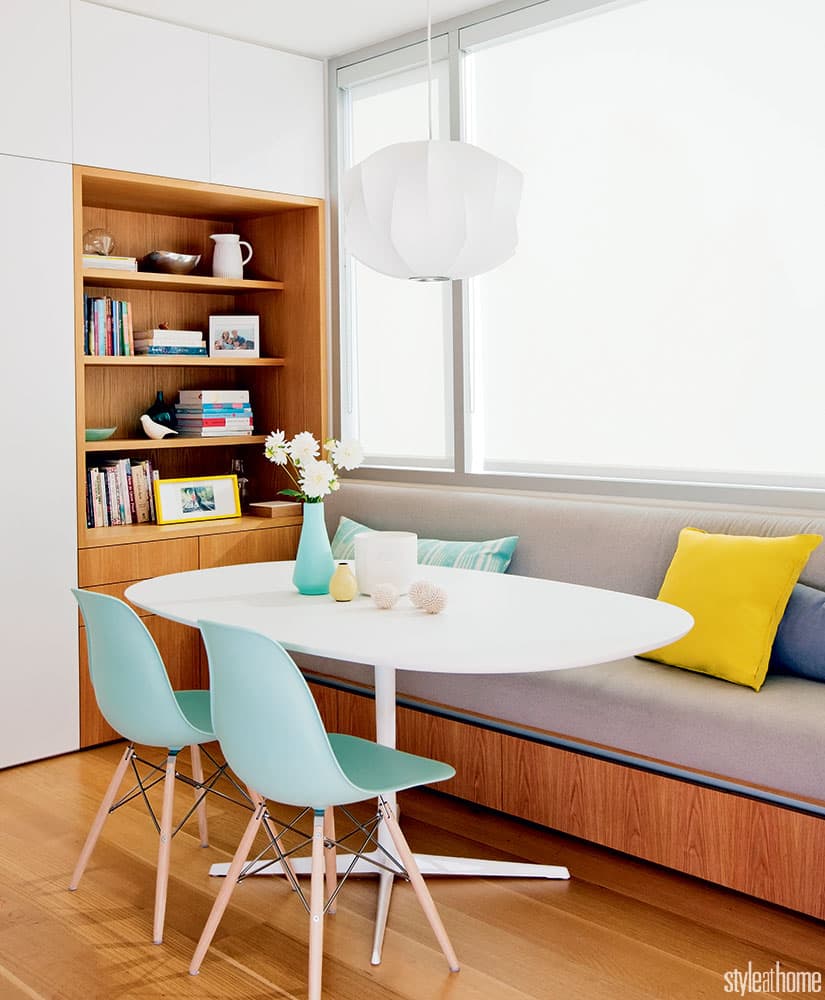 Intimate and inviting, the eat-in area of this Vancouver home’s kitchen is a favourite spot of the family who lives here. From the Eames chairs to the Nelson Propeller pendant light, Mid-Century Modern furnishings lend a timeless look, while the sunny palette keeps it fresh. 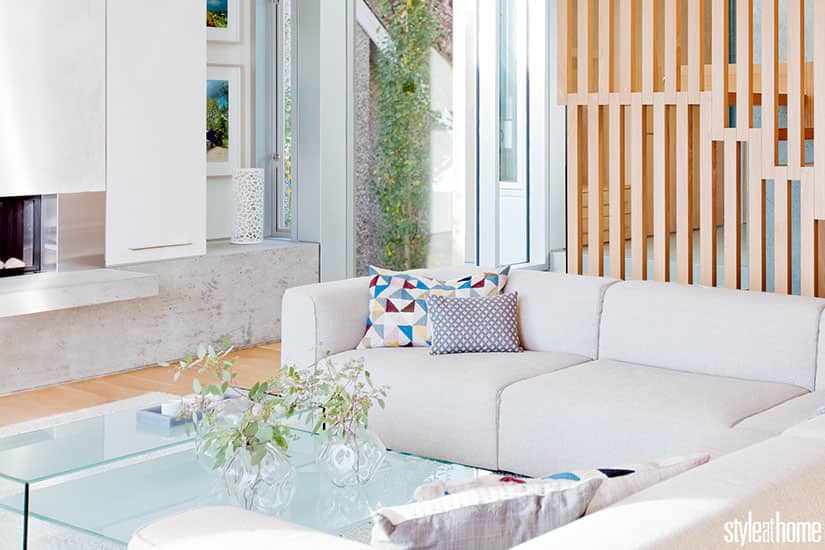 The central staircase, hidden behind a sculptural screen, adds an artistic architectural element that was also cost-effective. “The screen that’s providing the guard is also supporting every stair tread,” says David. “So it’s interesting but also essential.” 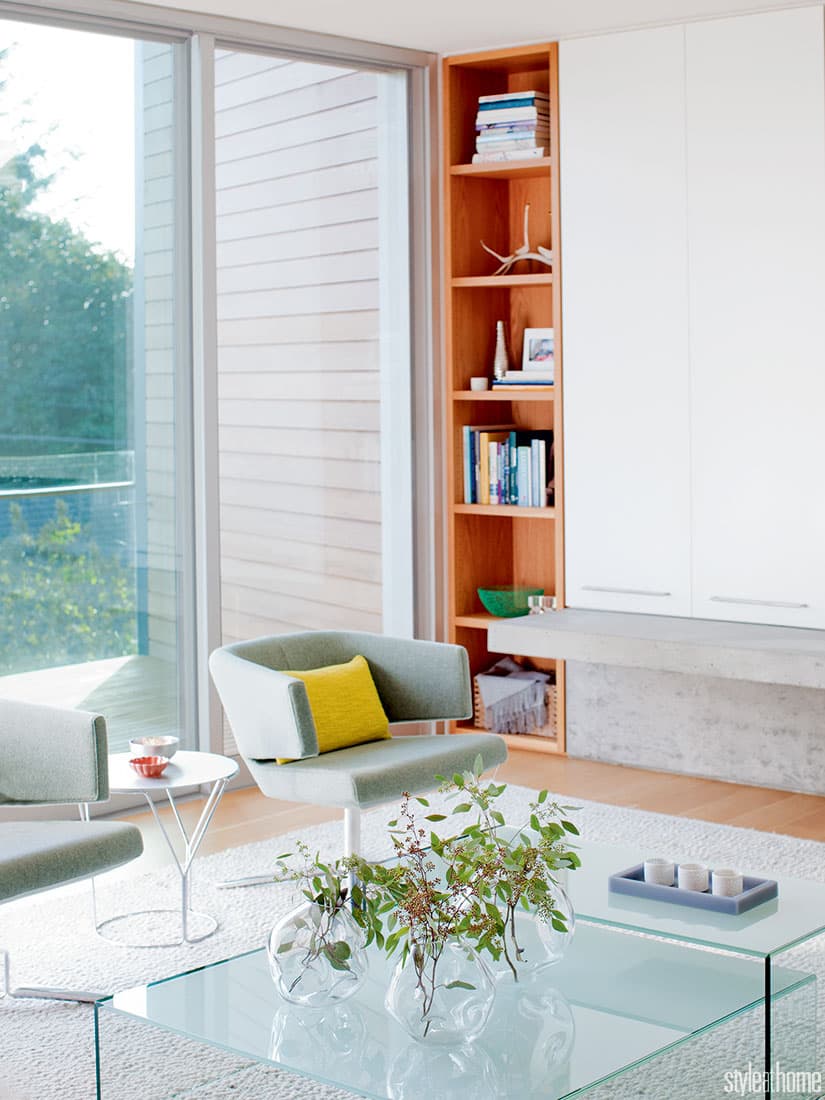 The living area’s glass nesting coffee tables are a light and airy counter-point to the fireplace’s cement hearth, which doubles as extra seating.