A dazzling home renovation dream team creates a comfy and collected home that is rooted in their histories.

It was a financial decision that initiated Rebecca and Peter Lapres’s “great creative adventure.” Three years ago, they were living in a 70-year-old house on a large piece of land on Vancouver’s west side when they took heed of the escalating real estate prices and decided to cash out and relocate to the city’s relatively less expensive east side. “We didn’t think it was a good idea to have so much money tied up in a property,” says Rebecca. 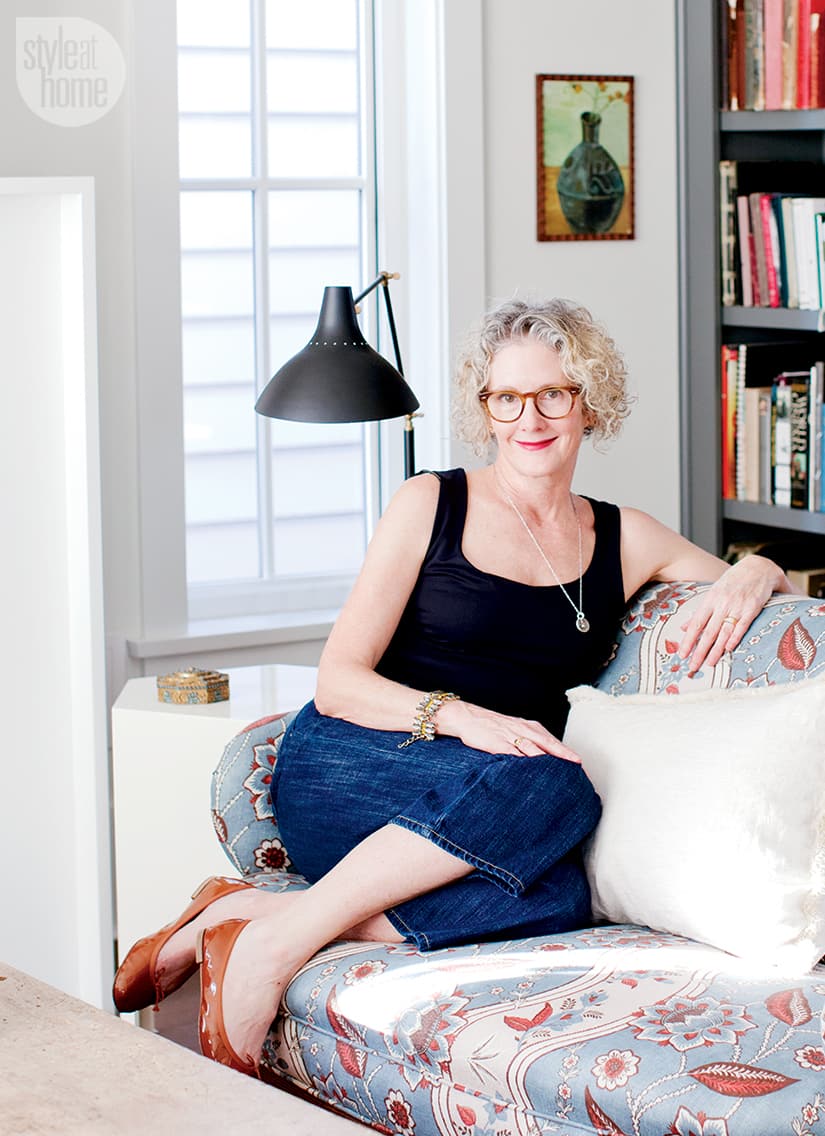 They discovered an old neglected teardown on a standard-sized lot in an up-and-coming neighbourhood and bought it right then and there. Why, you might ask? Well, Rebecca is a principal at Riesco & Lapres Interior Design, and Peter is a residential contractor and home builder. So the duo, a veritable dream team of home building, knew they could create a house from scratch that perfectly suited their busy family (which includes three children, three cats and a dog). The seven-month process resulted in this 2,900-square-foot three-storey urban cottage teeming with charm. A passion for everything time-worn and timeless inspired Rebecca to design a space that combines aspects of a previous era, including a strong respect for craftsmanship, with a refined feel. “I don’t see any reason for having to go modern if you’re building a new house,” she says. "We wanted ours to feel more established and traditional, but with a fresh look.” 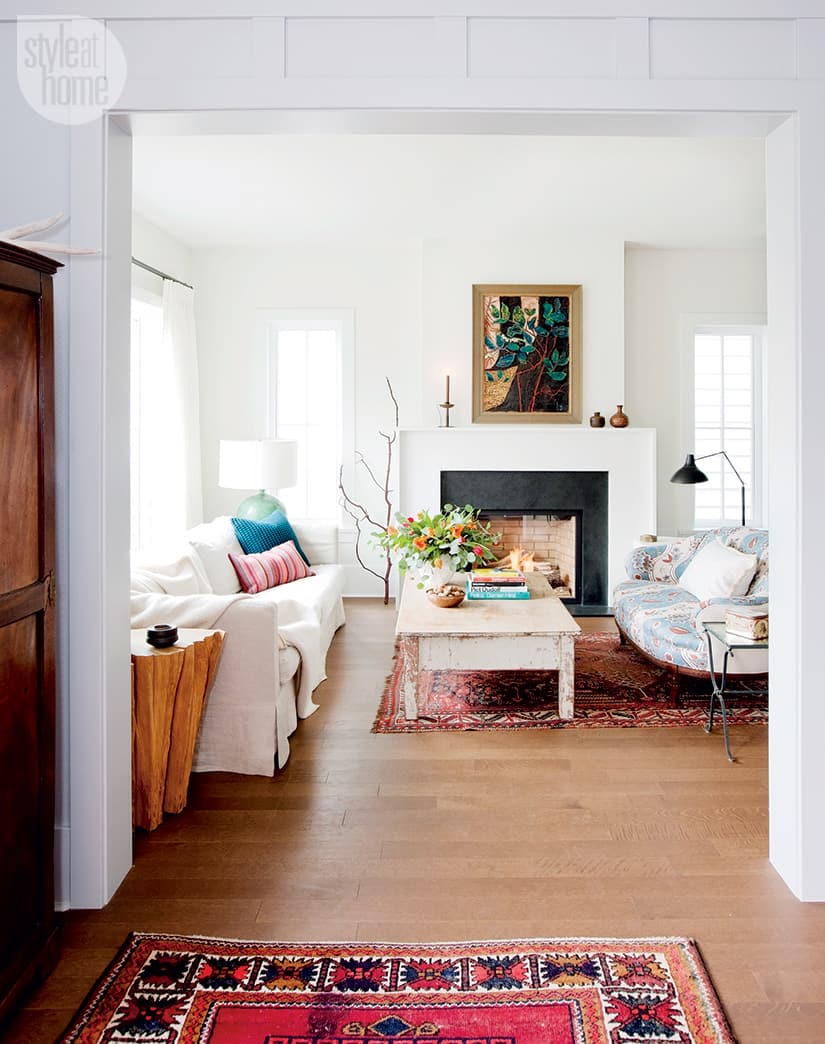 The living room of this Vancouver home features an eclectic mix that's meaningful to its homeowners: The coffee table is an old dining table with its legs cut down; the curvaceous settee came from a client of homeowner and designer Rebecca Lapres; and the side table was made by one of her brothers from a cedar stump cut down in the 1800s. 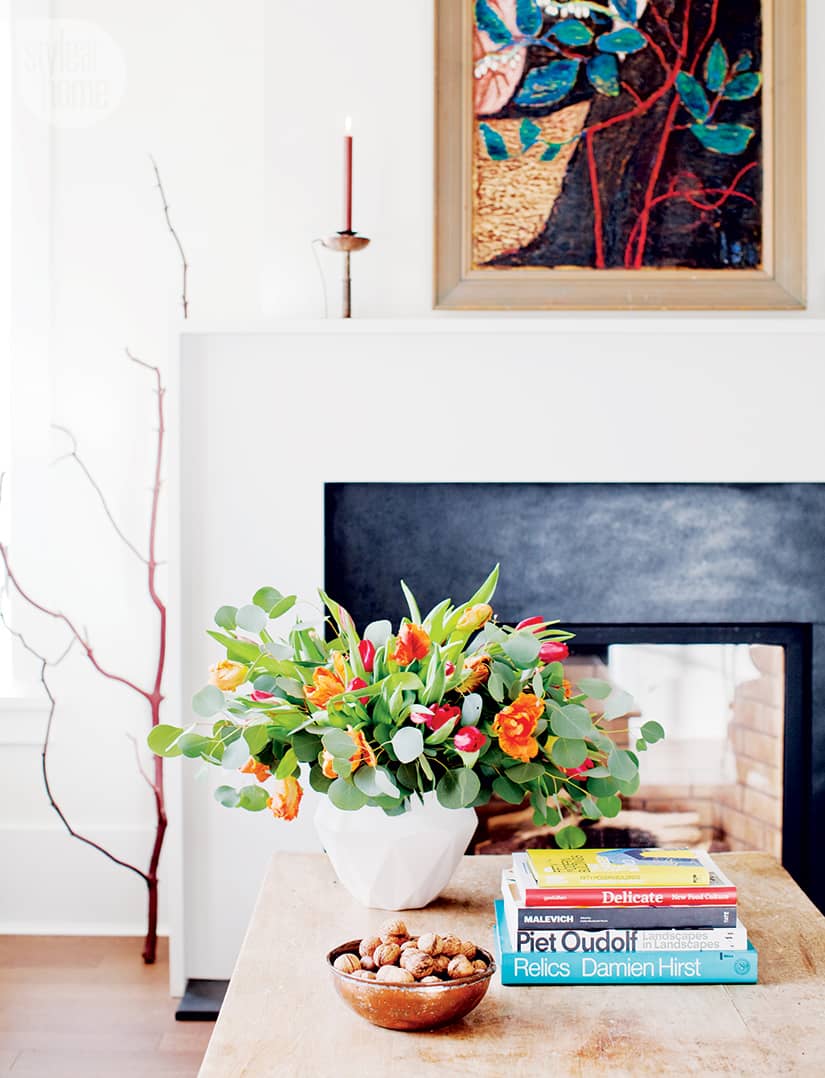 Eschewing contemporary architecture also meant bucking the trend of open-concept floor plans. Having lived in London for about two years, the couple became accustomed to narrow Victorian rowhouses that were tiny but still boasted separate rooms. For Rebecca, it was important to define formal and informal spaces, and to create cozy nooks where one could get away – resulting in plenty of wall space for art and furniture. It’s a practical sentiment, but it also appeals to the designer’s sense of playfulness and creativity. “I like interiors where there is a bit of mystery; where you wonder, ‘What’s around that corner?’” she says. “And you find little surprises and quirky touches that feel like an aha! discovery.” 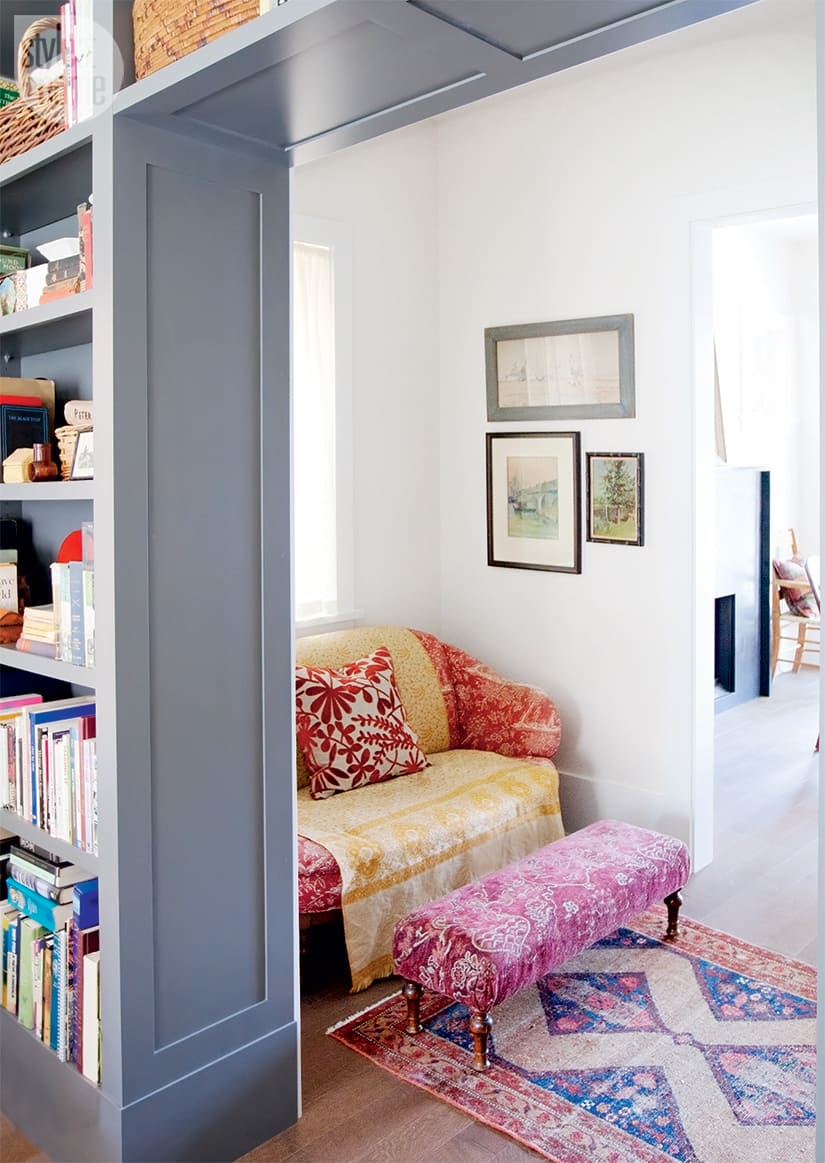 The settee in the home office is the perfect spot to curl up with a good read and a cup of tea. A wall of artwork offers inspiration. "Most of the art I buy is from non-professionals, and they're all fairly old pieces," says Rebecca. "For instance, I have a watercolour of the Galata Bridge an Istanbul painted by a British traveller in the 1920s. It's a very evocative painting for me. 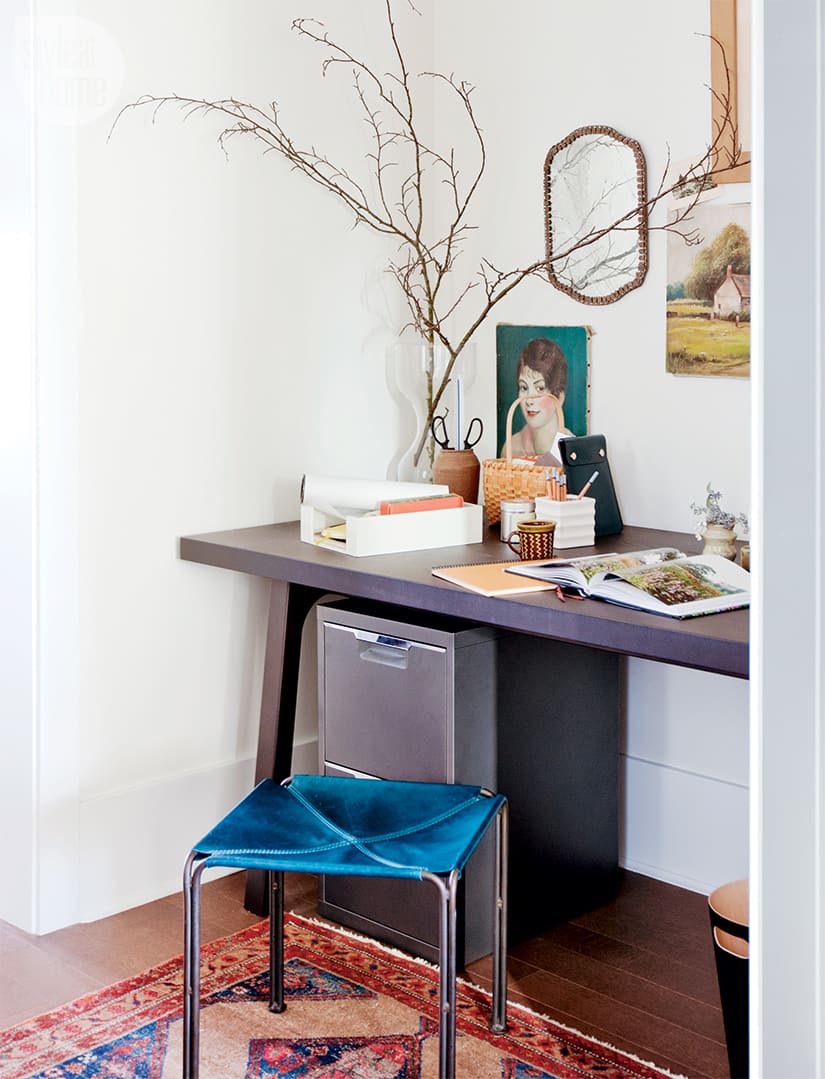 A place full of surprises and discoveries is in fact the perfect description for this house, which reflects the couple’s adventurous lives and sense of wonder. Furnishings and accessories were amassed over time – there are gifts from friends and relatives and items found at vintage stores and junk shops or during their stint in Europe – and most have a story. The rug in the kitchen, for example, was found in the ’80s during the nine months the couple lived in Turkey; the pottery pieces on the living room mantel were created by Rebecca’s late great-aunt, Hilda Ross, who taught in the fine art department at the University of British Columbia; and the entryway cabinet, which is used as a purse closet, came from the “beach shack” the pair rented while this place was being built. “There was an Englishwoman living there before us,” explains Rebecca, “and she sold me the cabinet for $150!” 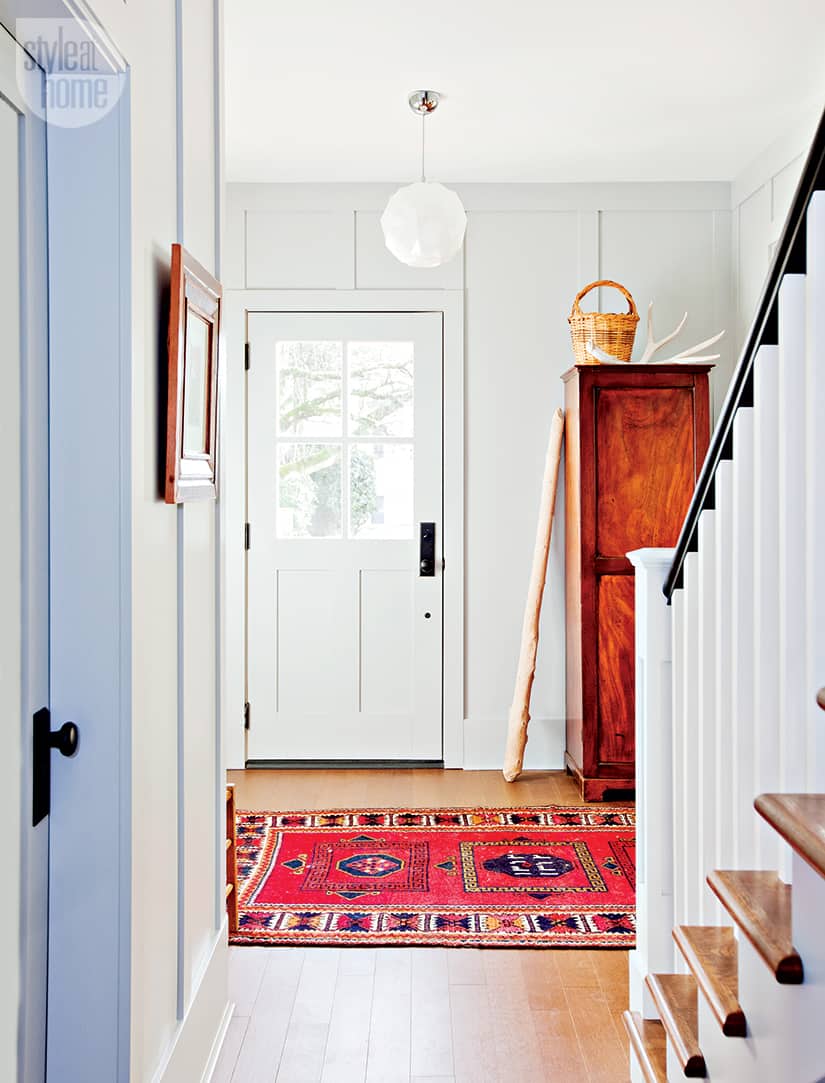 In the entryway, accessories like the naturally shed antler and the beaver stick lend the space an organic touch that reflects Rebecca's West Coast upbringing. "We found that stick on the beach," she says, "so it has a beautiful texture from the beaver chewing on it and then from being tossed around in the ocean."

This refined eclecticism – inspired by the rich, saturated sense of history Rebecca loves about London and by her outdoorsy West Coast ethos – fits the duo to a T. “I liken this house to the way I feel when I’m wearing very comfortable clothing,” she says. “There’s no stretch for me. I’m not pushing any boundaries. It’s simply my definition of home.” 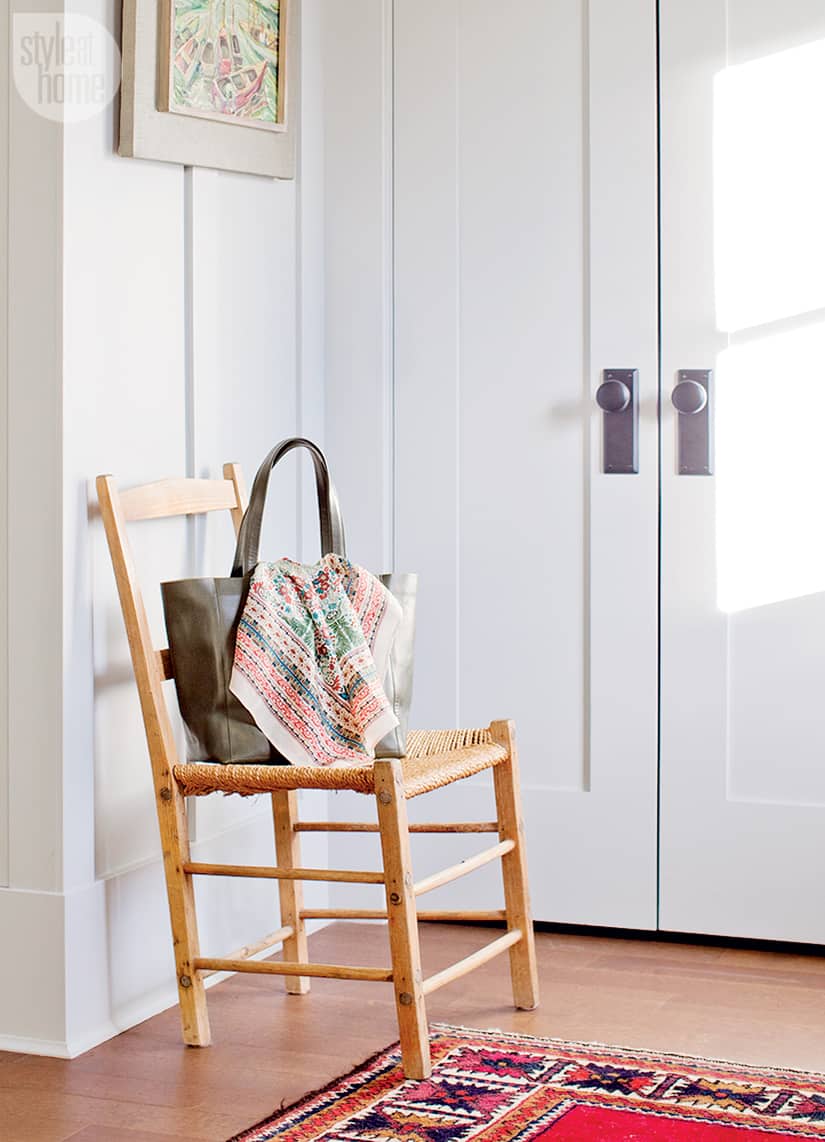 The large foyer is defined by board and batten siding that adds traditional character and offers a distinctive look. "I wanted to give the entryway a sense of significance," explains Rebecca. "I wanted it to say, 'Come into my house. Let me take your coat.'" 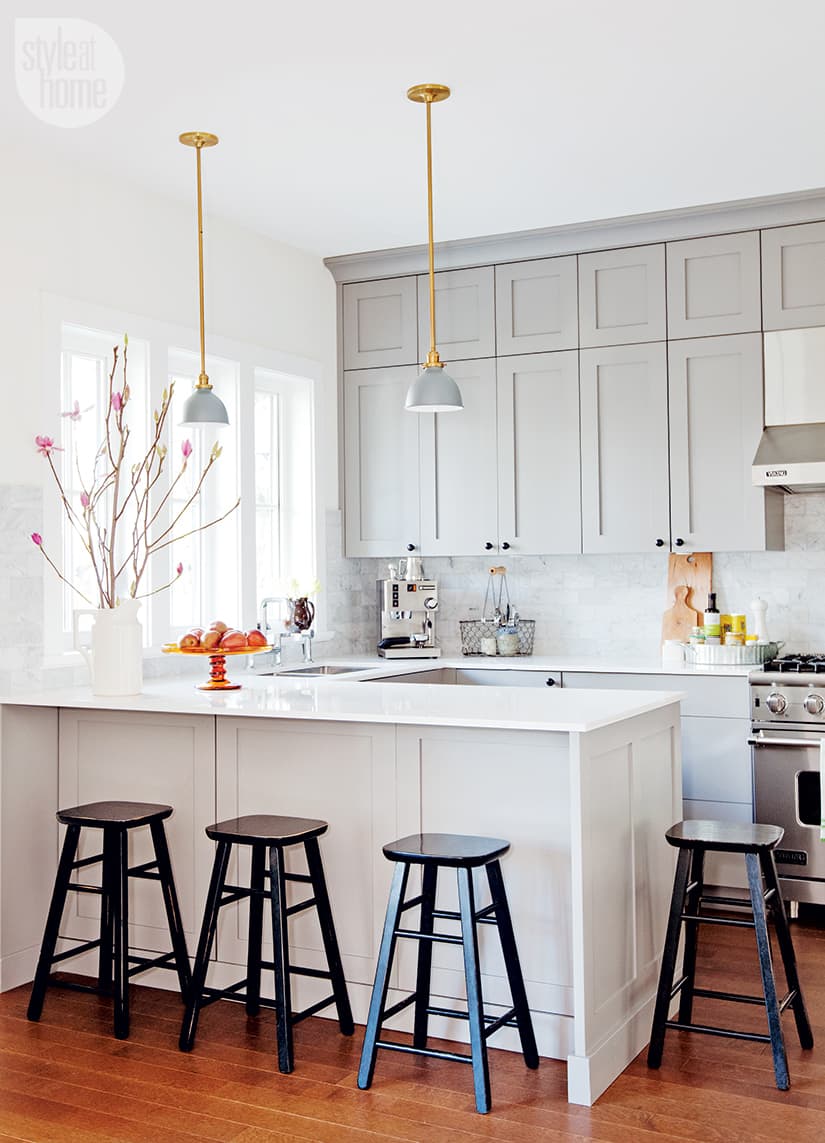 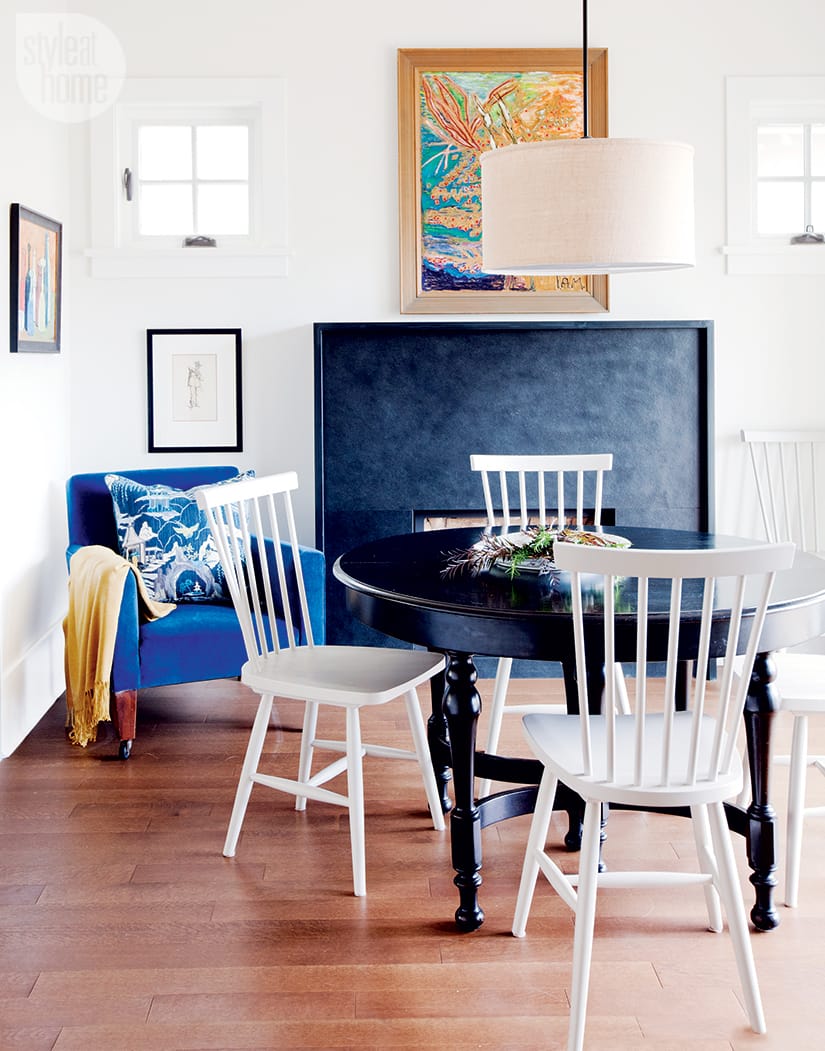 Open to the kitchen, the dining room is classic and striking, its neutral shades energized by splashes of juicy jewel tones. An old table with an ebonized finish is surrounded by light-toned Windsor dining chairs. "I searched for chairs forever," says Rebecca. "I wanted them to look like they came from a junk store - vintage, humble and simple." 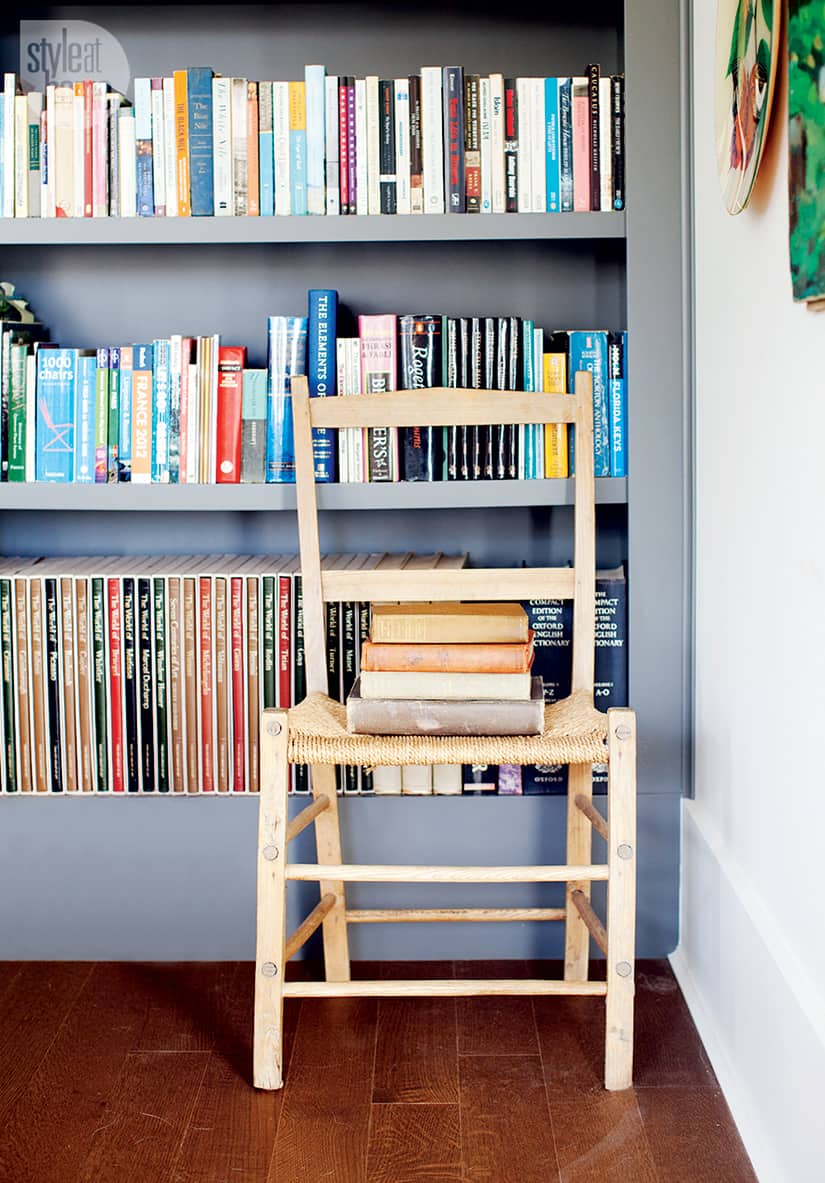 Bookcases in the living room add character and frame the doorway into the home office. "I love books," says Rebecca. "A lot of mine are non-fiction titles on travel and art, as well as a little bit of poetry." 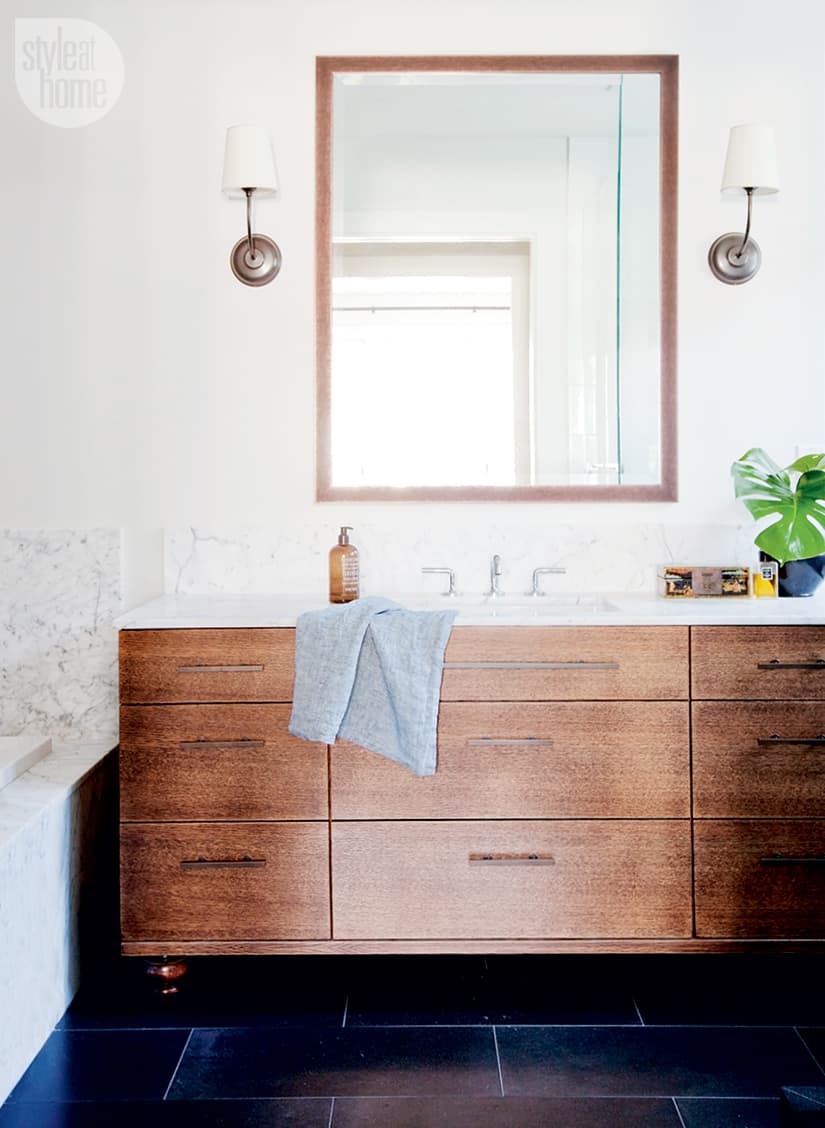 The master bath's built-in vanity, with its drawers and turned legs, looks like a stand-alone piece of furniture. It's made of quarter-sawn oak stained brown and brushed with a black glaze. "It has a nice depth and rich patina," says Rebecca. 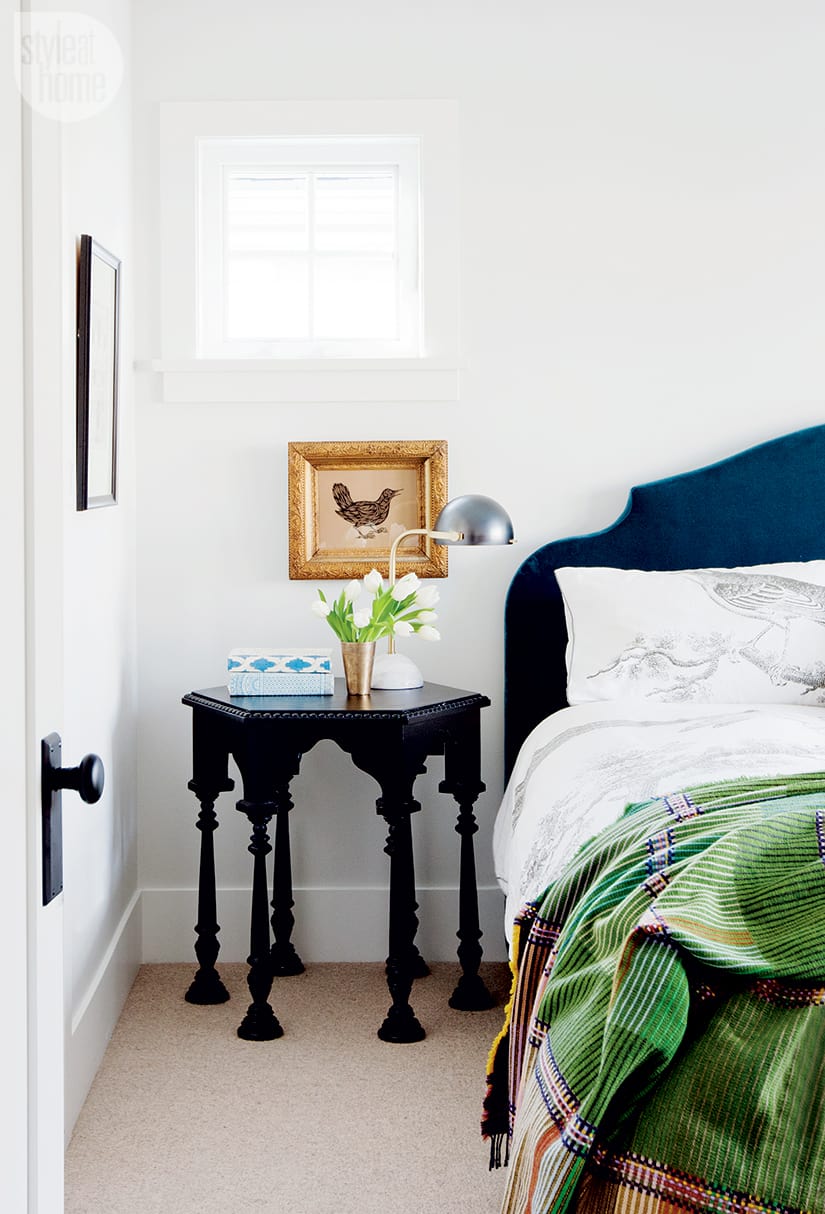 In the master bedroom, the side table lends an exotic Moorish look while the avian-motif bedding offers a hit of whimsy.

Urban cottage takes on a traditional feel with a fresh look