The first order of business when Tiffany Pratt designs a room? Ensure the space is a testament to her client’s unique spirit and stage in life.

When it came time to update her kitchen, designer and author Tiffany Pratt, who’s celebrated for her fearless use of cheerful colour, sought to strike a tone that would not only reflect her maturing personality, but also inspire the rejuvenation of the rest of her home.

Before the redesign, Tiffany’s 1,200-square-foot apartment – which is on the top floor of a 1920s house in Toronto’s Beaches neighbourhood – was filled with lots of youthful bright hues. But when choosing the new shades for her kitchen, she settled on a self-described “muted pink” palette: white cabinetry with dusty pink walls, a soft blush ceiling and geometric black, white and grey flooring. “I’m never going to change my love of colour and quirkiness, and I’m certainly never going to stop layering styles and patterns,” she says. “But this kitchen is a more grown-up version of my old aesthetic. It’s less playful, and more interesting and artistic.”

Being a tenant, Tiffany was limited to the existing long and narrow floor plan. She didn’t want to compromise the house’s nearly century-old original architecture, anyway. “I feel like this home has such a beautiful soul,” she says. So she overhauled the space with a coat of paint, new flooring and a quartz backsplash and countertops. She also added ample cabinetry to two previously bare walls: Shaker-style lowers grace both, but glass-fronted uppers on one side provide an opportunity for dishware display, while forgoing uppers altogether on the other leaves room for a decorative vignette. In the end, the designer nearly tripled her kitchen storage yet preserved its quirky character.

“Oh my gosh, I have counter space! I have storage!” says Tiffany of the results, which are now not only functional but also aesthetically in tune with her vibrant and cheerful demeanour. “I have a happy spirit, and this kitchen is a true reflection of the way I feel inside.” And that’s how she knows it’s the perfect room to inspire the transformation of the rest of her home. 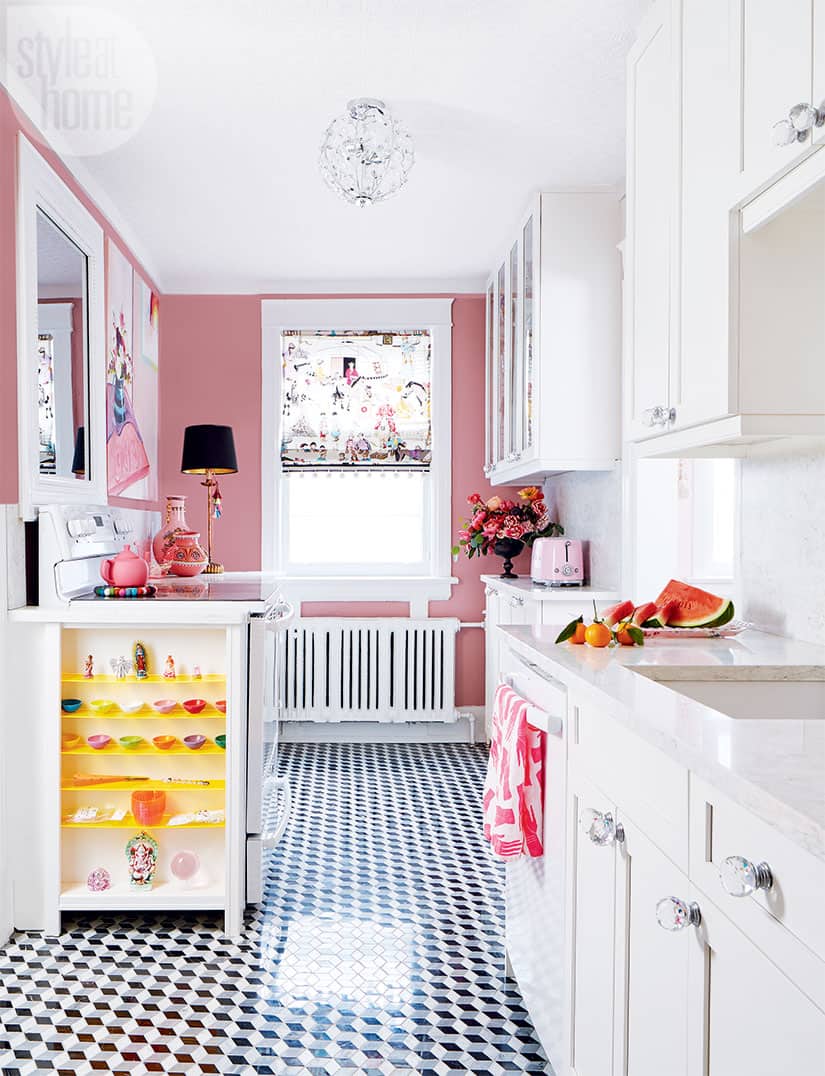 Homeowner and designer Tiffany Pratt asked her contractor to use leftover cabinetry and neon Plexiglas to build a narrow shelving unit next to her stove. It’s a bright burst of colour with a modern touch, providing a pleasing contrast to the classic Shaker-style cabinetry. 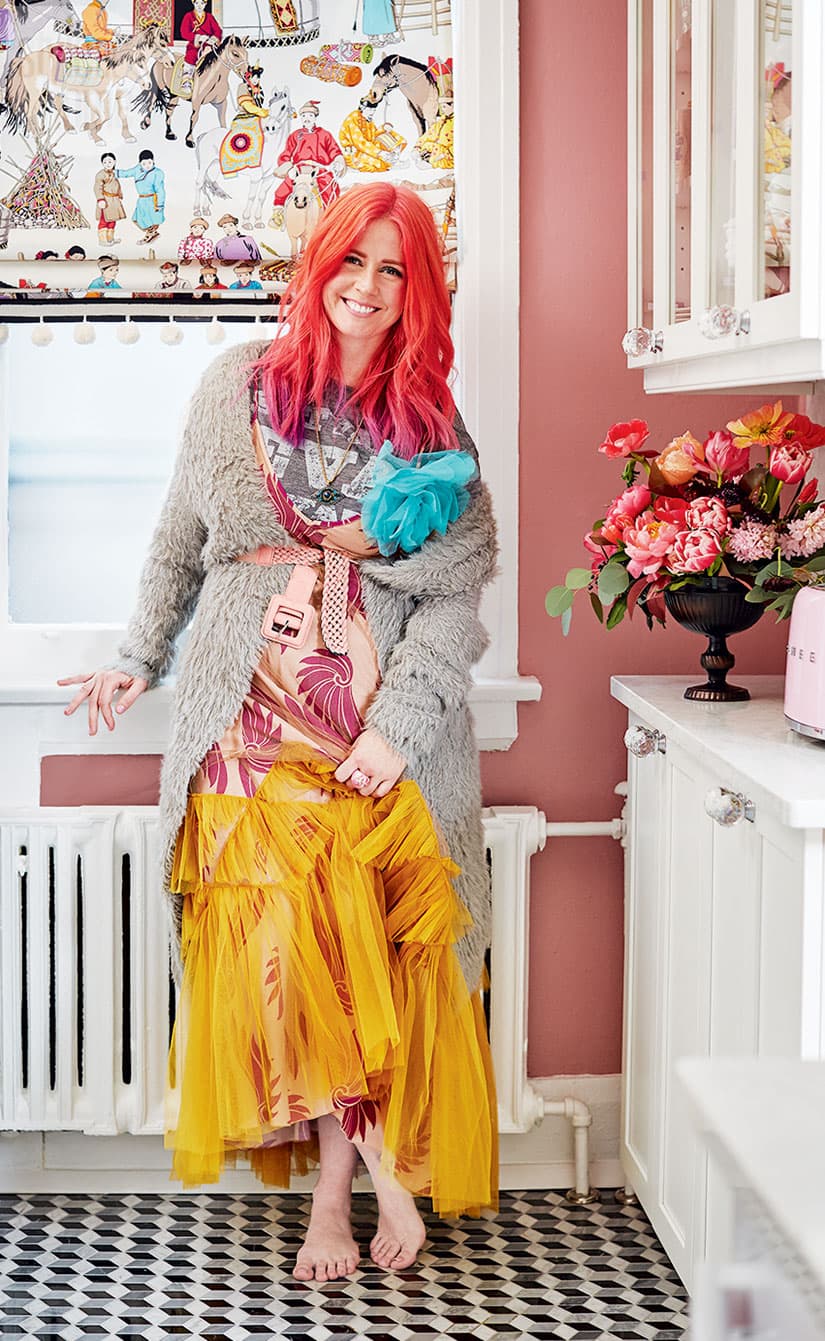 “If my kitchen could be an outfit, it would look like this,” says Tiffany of her layered Dries Van Noten dress, cozy grey sweater and tied pink belt. 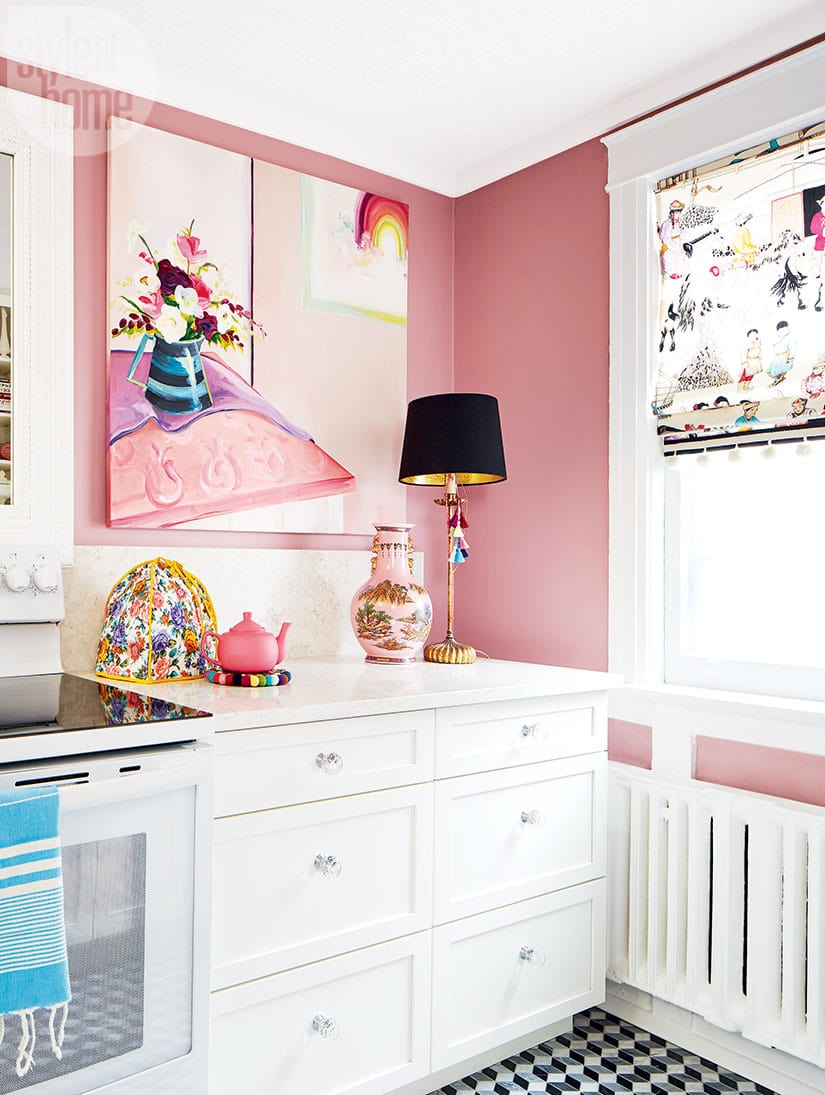 Where the designer could have added more cabinetry or shelving, she instead chose to make a decorative statement, pairing a painting with a few meaningful accessories, such as a trivet purchased on a trip to Japan and a small spoon (given to her by a fan) that says “this can Be Beautiful,” which is the title of Tiffany’s book. 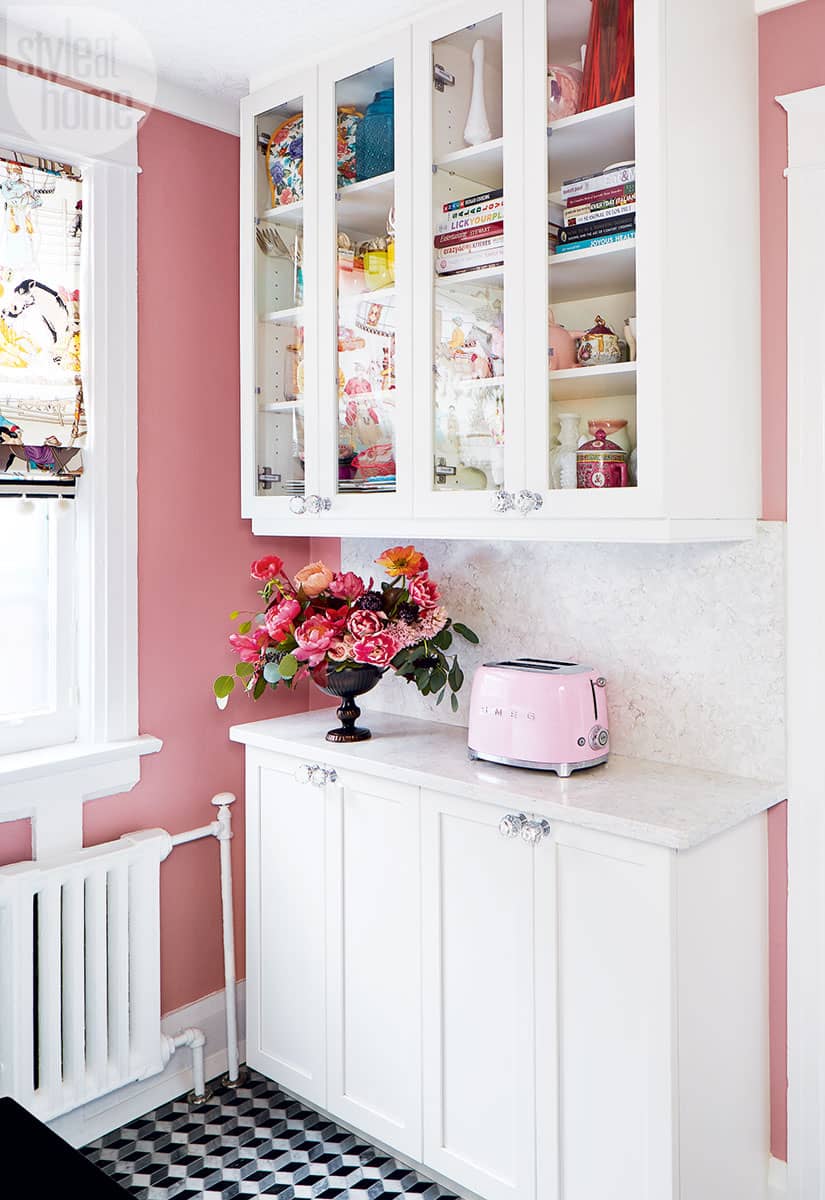 Glass-fronted cabinets should only house your most cherished objects – think vases, cookbooks, heirlooms and your favourite dishware. Tiffany recommends organizing according to scale. “I put small items at the bottom, medium in the middle shelves and large at the top,” she says. 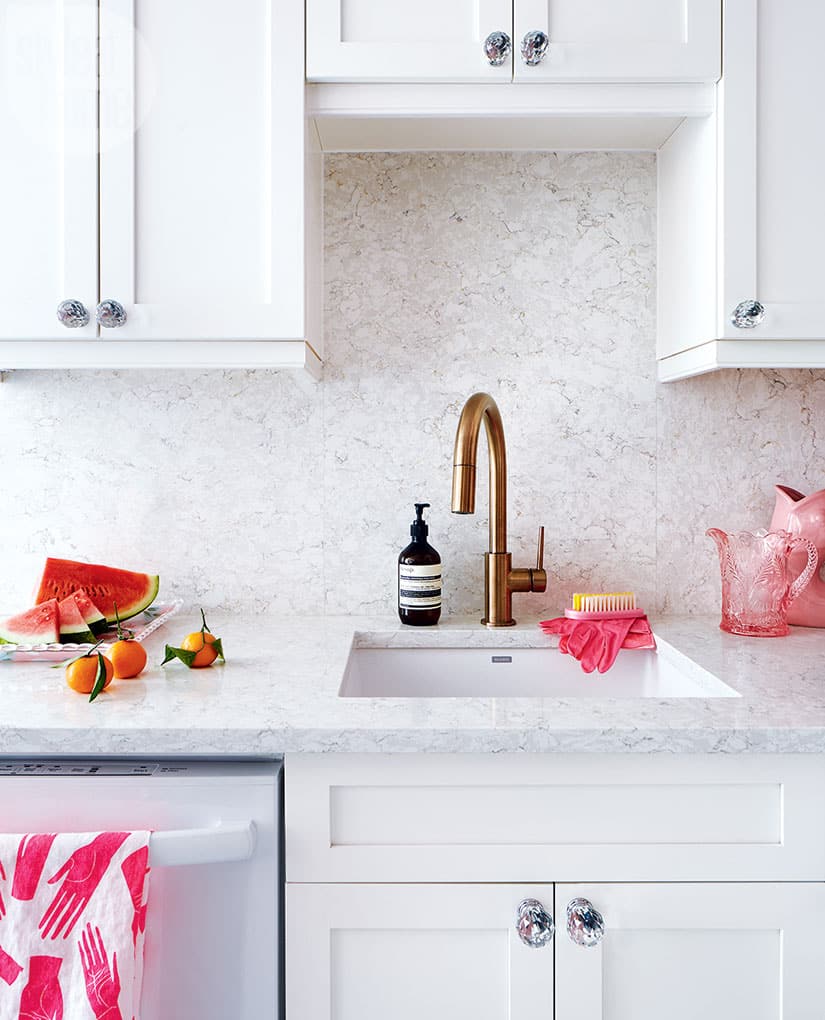 When it comes to metals, this rule-breaking designer prefers a mix for a more eclectic look. Here, she chose a champagne bronze faucet, which looks good with the antique brass lamp, dark bronze compote vase and chrome and crystal cabinetry hardware. Though knobs like this would normally go in a bathroom, Tiffany explains, she opted to do something more unexpected. “After all, this is a girly kitchen, and this is a light-reflective and prismatic detail.” (And you know what they say about diamonds being a girl’s best friend.)

Pops of pink add quirky charm to a petite kitchen