Small houses get a bad rep, what with their owners forever planning to tack on another floor or a fat addition out back. But Nicole Dennis Durnin loves her pint-sized place just the way it is. “My husband and I are over the moon with it,” she says. “Cozy spaces bring you closer as a family.”

The object of her and husband Andrew’s affection? A 922-square-foot bungalow at the foot of a mountain in North Vancouver. With its stunning setting and gardens in both front and back, the property is the picture of domestic bliss.

Until early 2015, the pair and their three-and-a-half-year-old daughter, Evelyn, had actually thrived in less space – a 630-square-foot condo. But, ready to depart the downtown core, they asked Nicole’s mom to sell them the 1940s bungalow she used as a rental property. Having gained much more space, the couple set about making it their own.

While the larger footprint was welcome, the bungalow’s layout and aesthetics needed improving. A labyrinthine layout and hodgepodge of hues – maroon and mustard walls were in play – established the opposite of the soothing monochromatic look the couple craved. “My husband and I are drawn to bright white spaces,” says Nicole, the proprietor of LynnSteven, a women’s boutique (Andrew works for the municipal government). “Our condo was all white, down to the hardwood floors.”

To institute their coveted aesthetic, the couple turned to the same local designer who had lightened the look of their previous home. “I am known as the guy who works with white,” says designer Peter Wilds with a laugh. He’s also known for his Scandinavian sensibility – think simple forms in tone-on-tone rooms. Like Nicole and Andrew, Peter is part of the small-space fan club. “I think people live in homes that are too large for them, and often they don’t know what to do with the extra space,” he says.

Working within limited square footage, however, calls for a rigorous plan. “I treated this project like a London laneway house where you open the front door and the living room and kitchen are right there in front of you,” says Peter. The six-month reno entailed reconfiguring the bedrooms and blowing out the wall between the kitchen and living room to create a continuous look with better functionality and flow.

Such seamlessness was vital in the kitchen, since you see it as soon as you enter the house...or maybe you don’t. An uninterrupted bank of flawless cabinetry looks like a plain white wall but provides storage for dishes, small appliances and pantry goods. Peter purposely chose furnishings that would disappear into the background to keep the space light, airy and unified. “The big joke is that when the couple hosts dinner parties, people ask, ‘Where’s your fridge?!’” says Peter, who had it fully integrated to blend into the cabinetry.

To keep the visual noise to a minimum, each furnishing and accent “had to earn its place,” says the designer. There’s no room here for impractical eye candy, so a Scandi palette of chic greys and watery clays quietly elevates the white walls. All of these neutrals are amplified by bold black flourishes evidenced in the pendant lights, faucet and a 24-inch-wide stove. Juicy emerald-hued vases and artwork that’s casually leaned against the wall underscore the fresh greenery indoors and out, providing a hit of low-commitment colour in the open-concept space.

It all makes for a neat modern home that may not be a palace of endless rooms (let’s face it, many go unused anyway!) but is perfect for this family that’s unafraid to spread the love: “We entertain often,” says Nicole. “That seven-foot-long dining table has seen more than its fair share of pizza parties.” 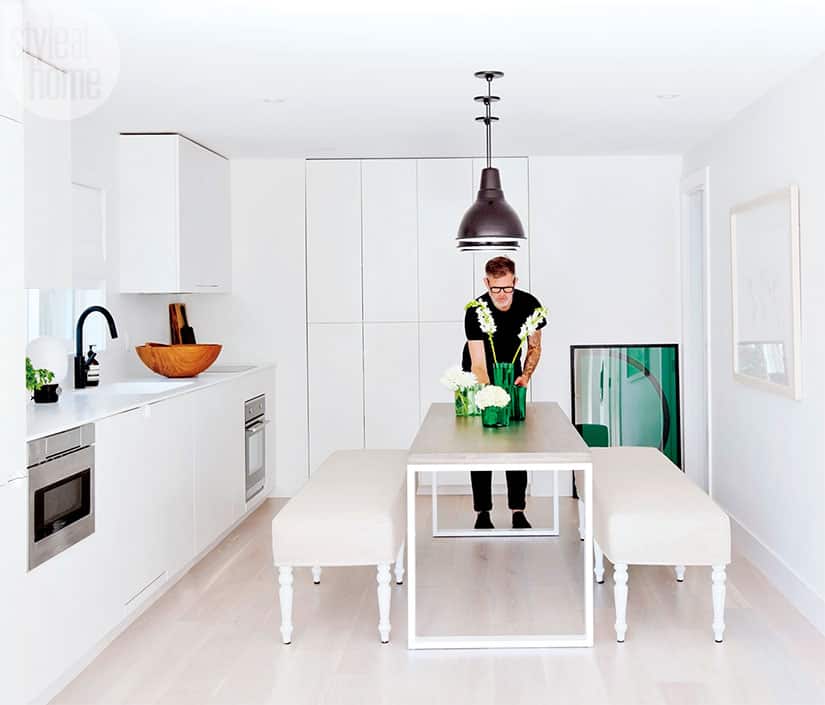 “The furniture you choose must be both functional and comfortable,” says designer Peter Wilds of his approach to decorating a small space. One of homeowner Nicole Dennis Durnin’s favourite pieces? The harvest table, which bridges the 1940s bungalow’s modern interior and historic past. Its unobstructed base keeps sightlines open, and the plush benches, with their turned-wood legs, can be easily tucked underneath. 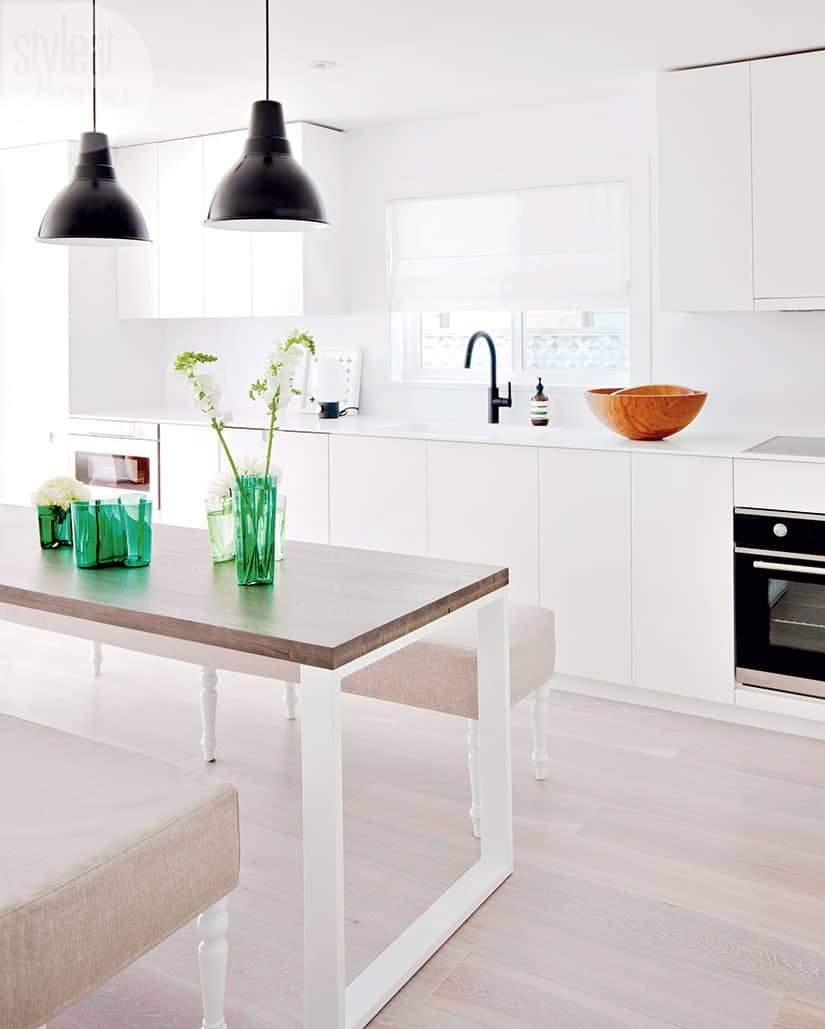 The ethereal kitchen gets its good looks from Peter’s extreme attention to detail: A lean half-inch-thick Corian countertop appears almost perfectly flush with the lower cabinetry and also makes up the backsplash. Going full-height with the backsplash creates a luxurious, seamless look. “Material lines can break up a space,” explains the designer. 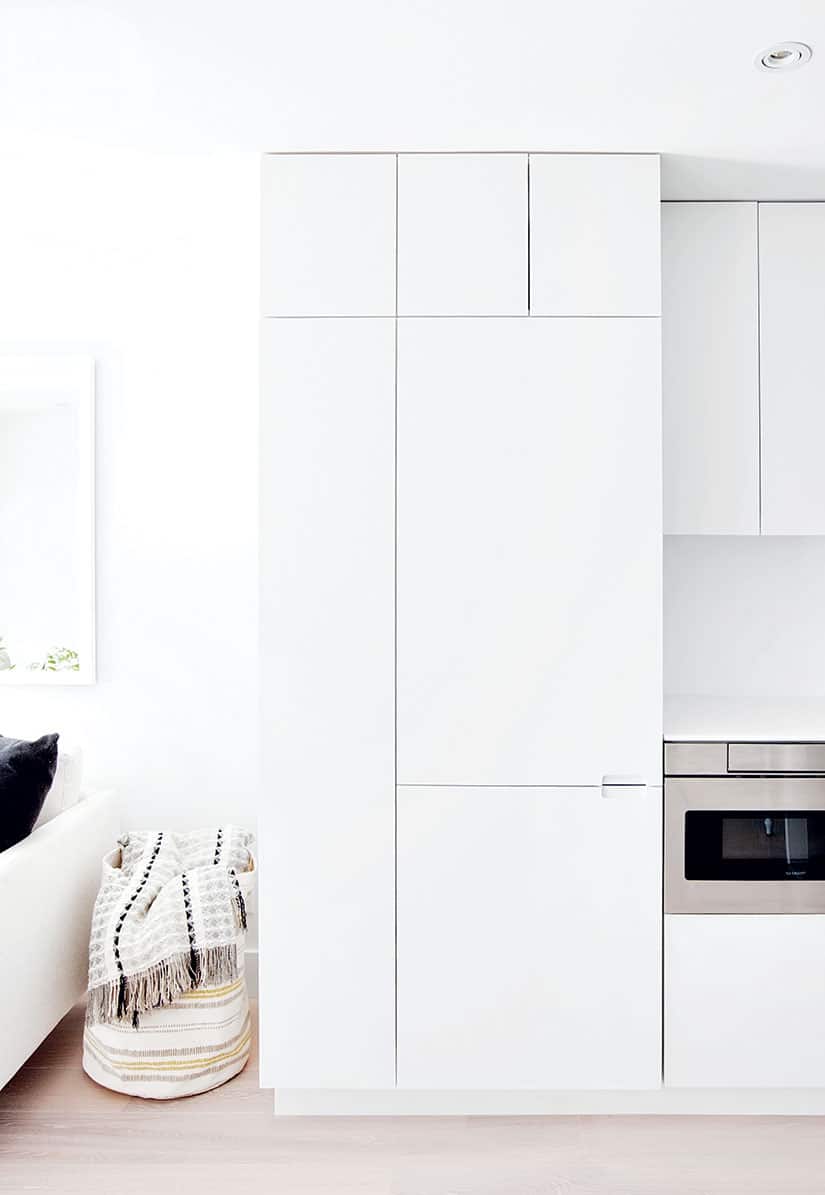 Don’t let this stunningly pristine space fool you. The minimalistic floor-to-ceiling cabinetry blends into the background, but offers ample storage space for the couple’s young daughter to stash toys and art supplies. 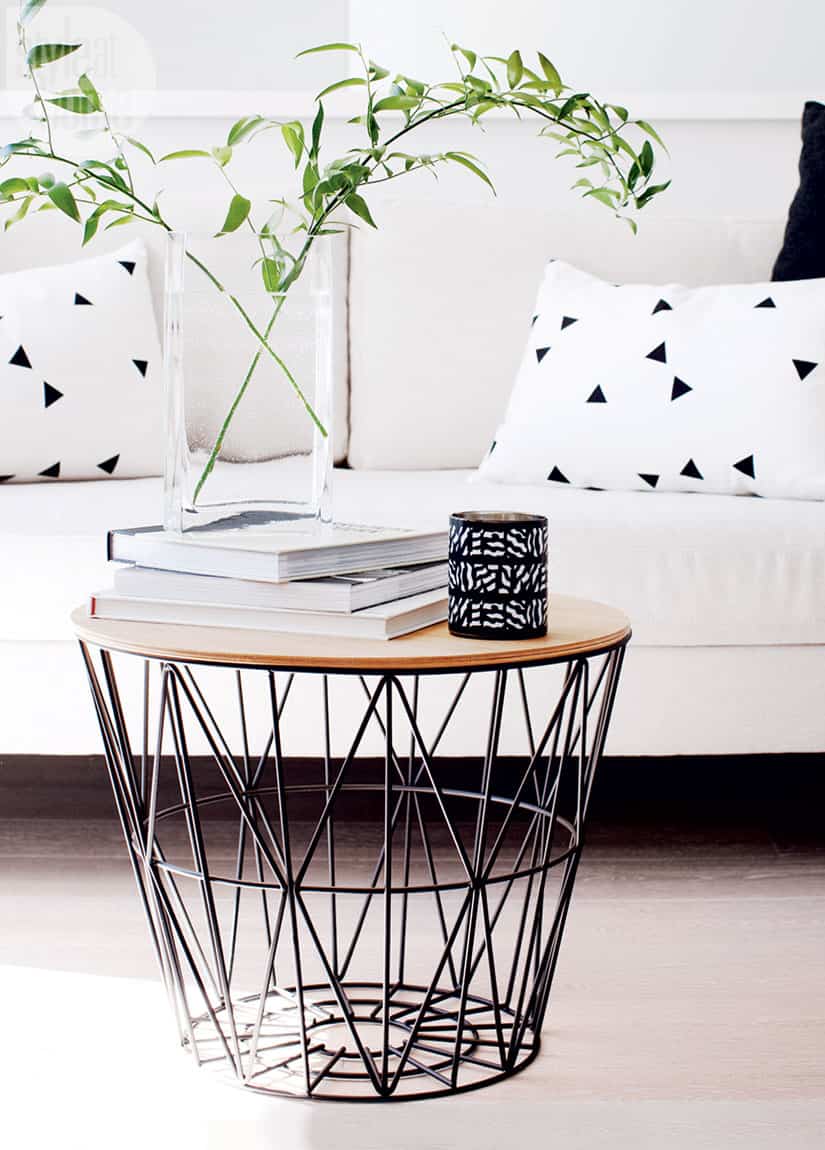 Busy patterns and too many colours can complicate tight quarters while cohesion creates comfort, so Peter limited his palette to just a few flourishes, such as the living room’s triangle-patterned lumbar cushions, which pick up on the black accents elsewhere. “When you’re standing in one spot and looking into different areas, there should be a relationship between the rooms,” says Peter. “Those connections make them read as one large space.” 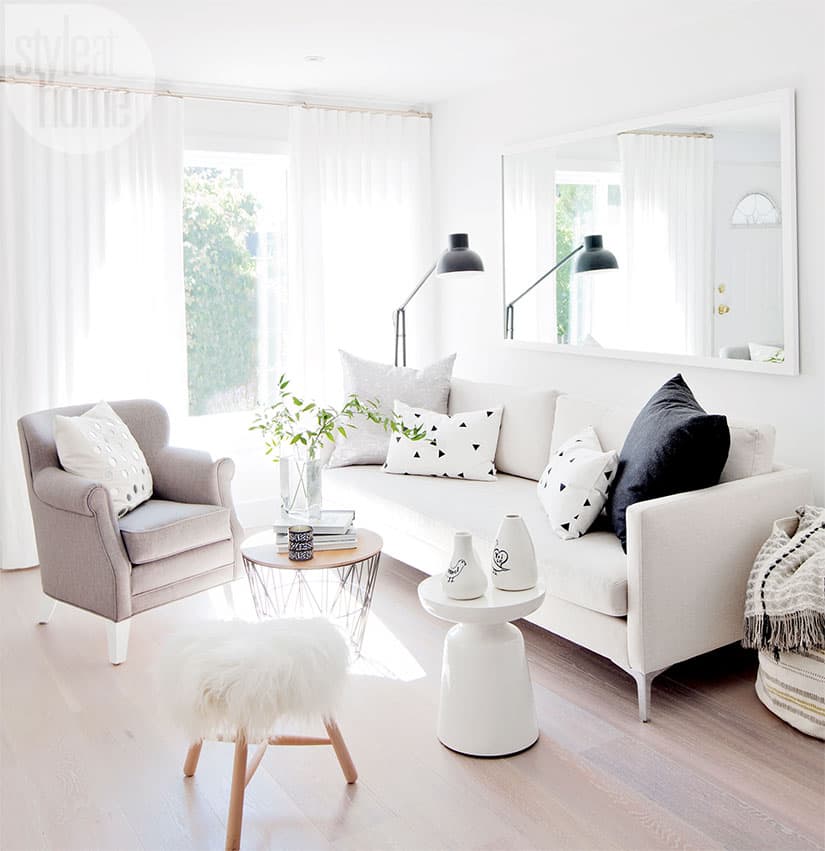 Mirrors are essential to Peter’s approach to decorating small spaces. “They blow open a wall and make the room look twice as big,” he says. “The mirror hung above the living room sofa reflects an adjacent window, bouncing the light around in amazing ways.” 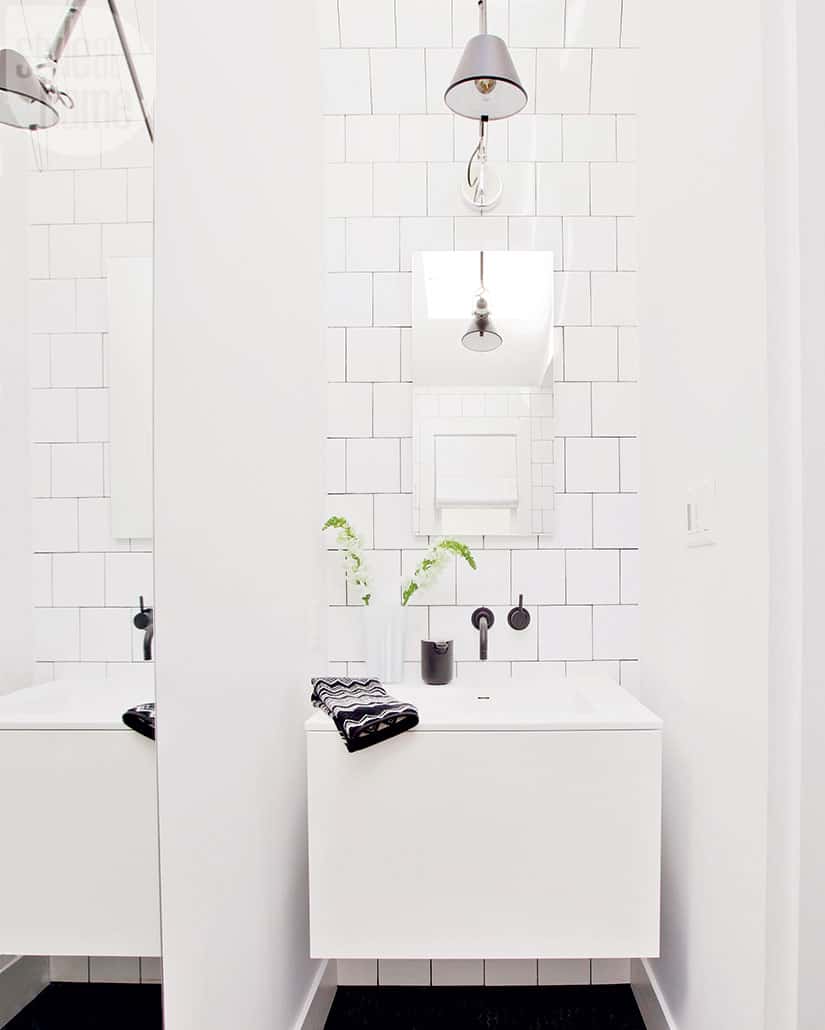 A 27-inch floating vanity and an articulating sconce are excellent space savers in the tiny bathroom. “I love using task lamps,” says Peter. “They’re perfect for getting ready in the morning.” 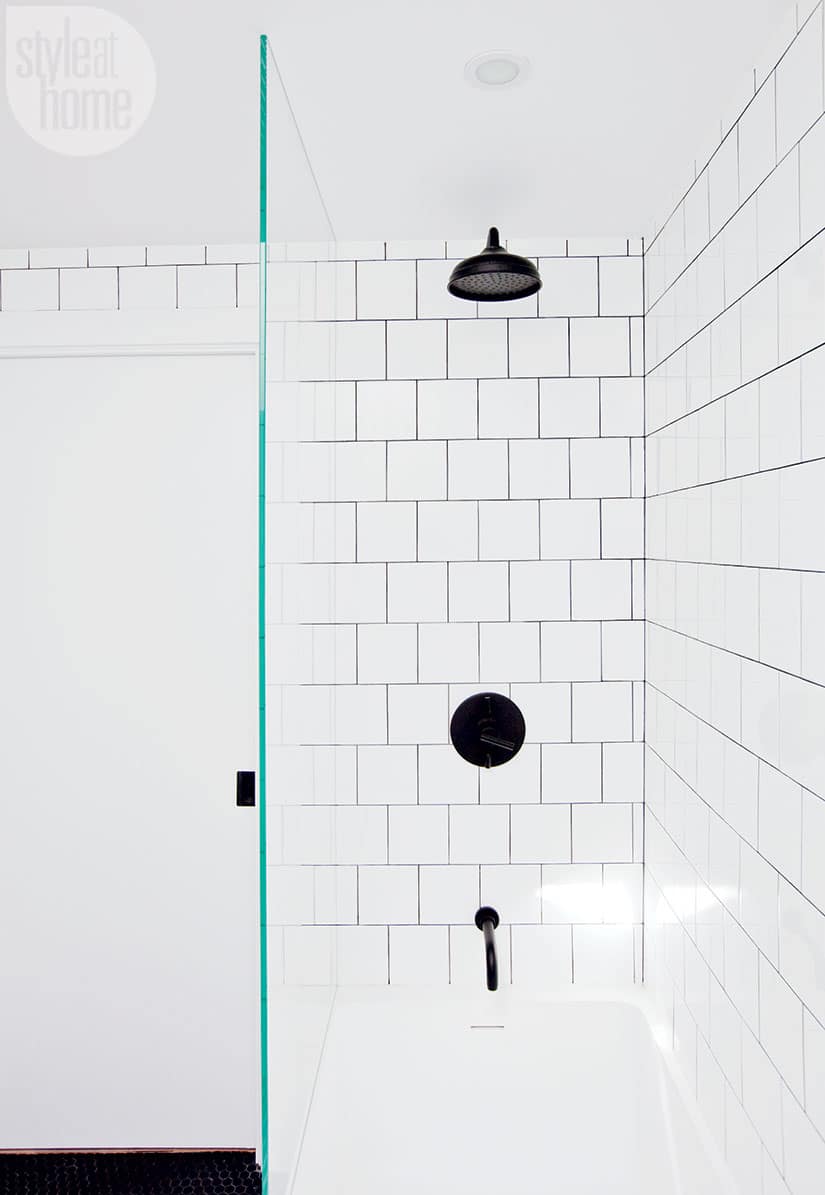 Gorgeous black bathroom fixtures seize the spotlight against an explosion of six-inch-square white tiles. Emphasized by contrasting dark grout, the wall tiles lend drama and make a statement in these snug quarters.

A cozy bungalow that's short on space but not on style