This warm and homey cabin is so much more than a spot to keep warm while the kids play shinny.

Come wintertime, the Pixley brood doesn't hole up. Instead, Claudia, 12, Anna, 9, and William, 7, don warm layers, lace up and get on the ice. “Our kids want to skate all the time. Once the water freezes over, they’re out here almost every night, often with their friends or cousins,” says mom Kristyn, referring to the half-acre man-made pond on the family’s 10-acre slice of chilly paradise near Okotoks, Alta.

For their part, Kristyn and her husband, Mike, grew weary of teeth-chattering evenings spent supervising outdoors, so in 2014, they had a timber cabin built at the pond’s edge. Fondly referred to as the “skate shack,” the rough-hewn 180-square-foot structure quickly cemented itself as a hot spot for adults to congregate and catch up, although it was bare-bones and rapidly accumulating clutter. “We decided to polish it off to make it really cozy and stylish, so we could all enjoy great company while the kids skate,” says Kristyn, who brought in designer Neelam Gurm to do just that.

Focusing first and foremost on function, Neelam proposed storage and seating in the form of a built-in bench as well as a small bar area for serving drinks and snacks. Channelling Canadiana, the designer introduced layers of faux fur, knits and plaid, as well as woodland-inspired elements, such as a cheeky antler-look chandelier. “In a small space like this, it’s fun to explore a theme,” says Neelam, who kept to a quiet grey-scale palette to maintain a modern air.

“It’s been a thrill to learn that the homeowners frequent the space even when the kids aren’t on the ice,” says the designer. Kristyn confirms: “Sometimes Mike and I will have a little date night here. We’re still on the property, near the kids, but it’s a quiet place we can unwind and check in with a glass of wine.” 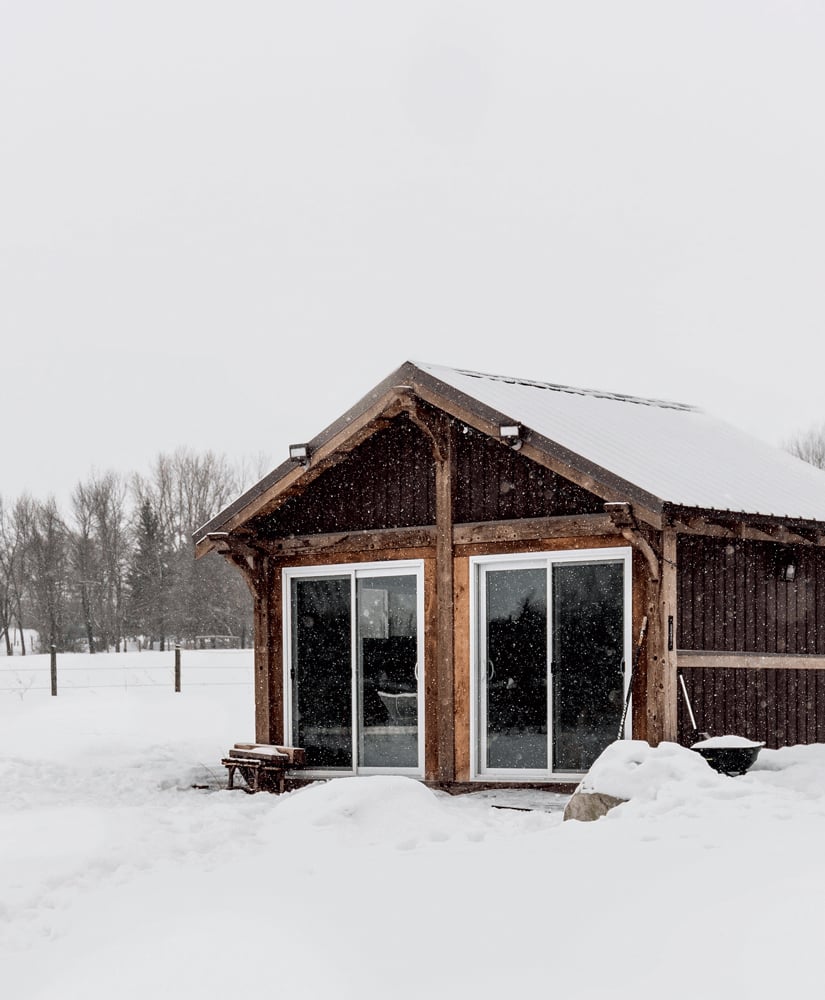 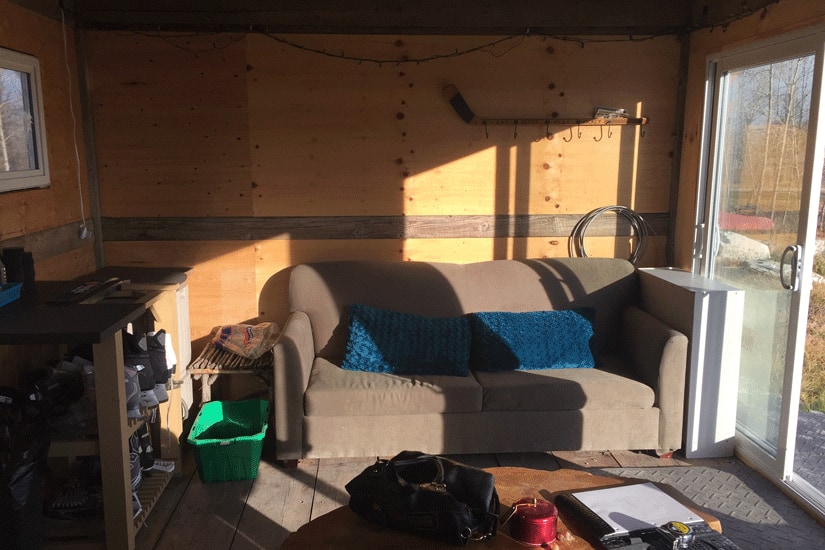 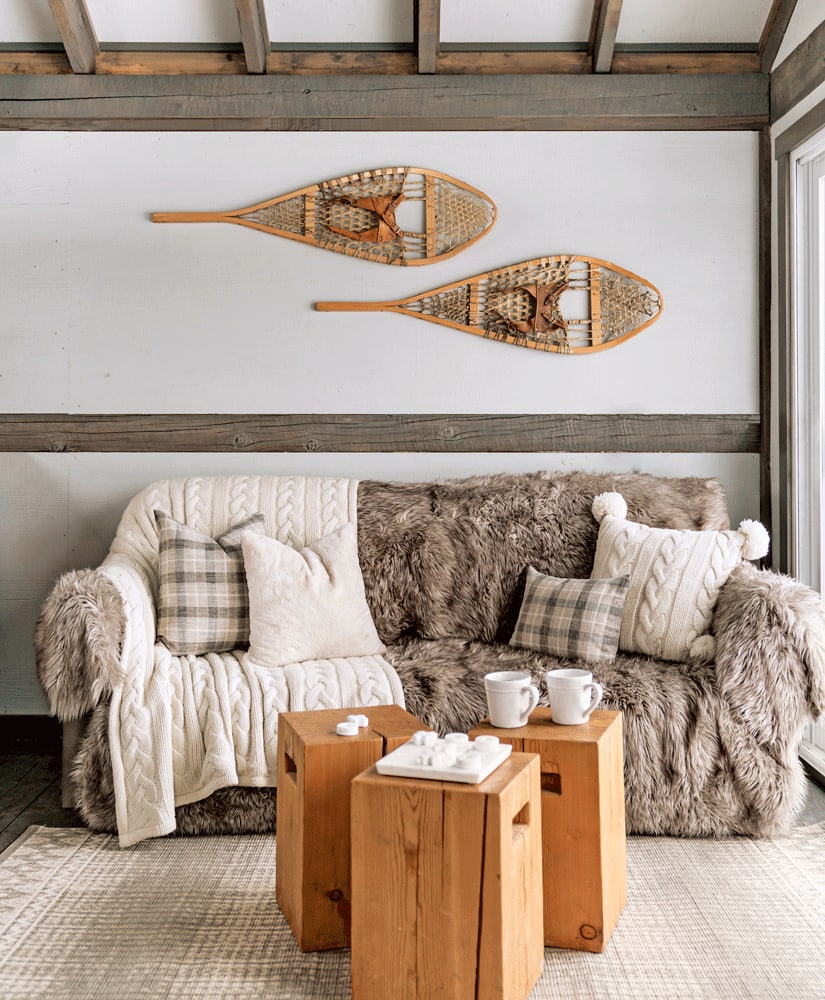 This skate shack is anything but high maintenance. Designer Neelam Gurm gave its existing features basic but impactful updates: For instance, the drab pullout sofa was transformed with layered faux fur and cable-knit throws. “We’ve had a few people crash here when the wine was flowing,” says homeowner Kristyn Pixley with a laugh. Vintage snowshoes found on Kijiji are apt wall art. 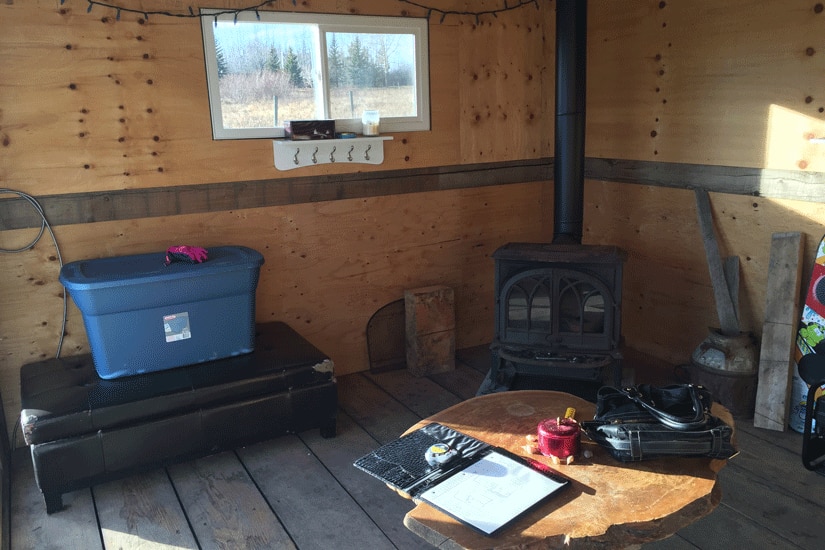 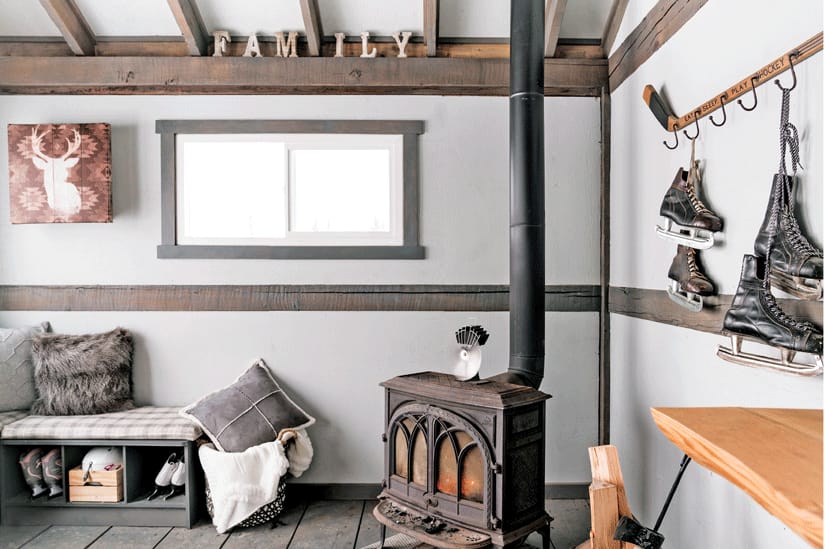 “When you’re in the space, it’s so beautiful,” says Neelam. “Lots of time and craftsmanship went into building the vaulted ceilings and beams, so I wanted to highlight them.” The designer achieved this effect by having the beams and flooring painted a darker shade of grey than the walls and ceiling. 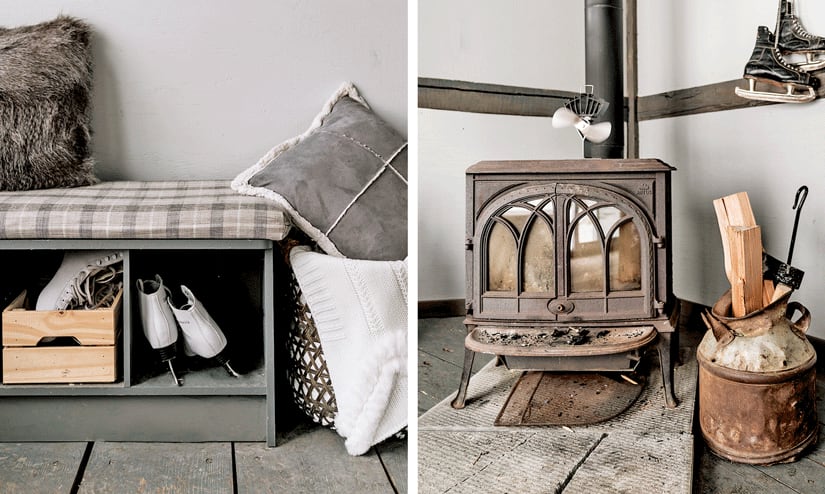 “We tend to accumulate many sizes of skates, as well as extra helmets and mitts,” says Kristyn. Smart storage was a must, so the first thing Neelam proposed was a built-in L-shaped bench with open cubbies in its base. Custom plaid-clad seat cushions, as well as toss cushions and throws in cozy textures, make it an extra-snug perch.

Accompanied by a circa-1920s milk jug filled with firewood, a salvaged cast iron wood-burning stove keeps the family snug and toasty. “It gives off a ton of heat,” says Kristyn. 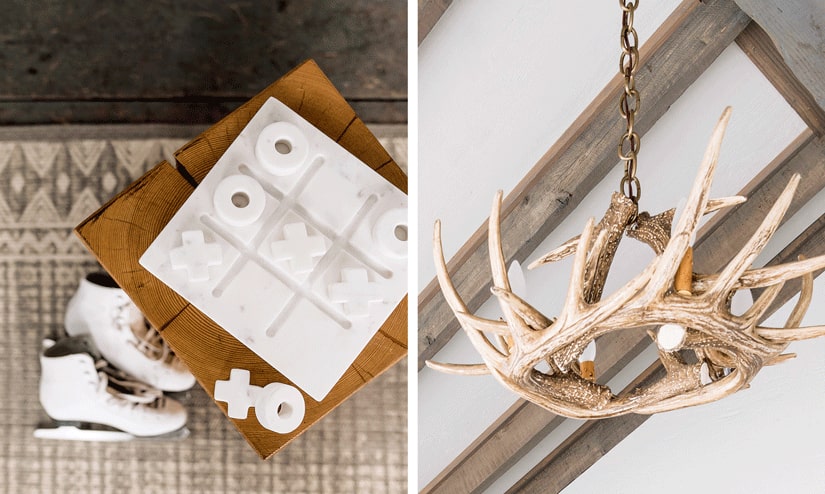 With the cabin’s natural surroundings as her muse, Neelam explored a woodland theme with pieces like this faux antler chandelier. 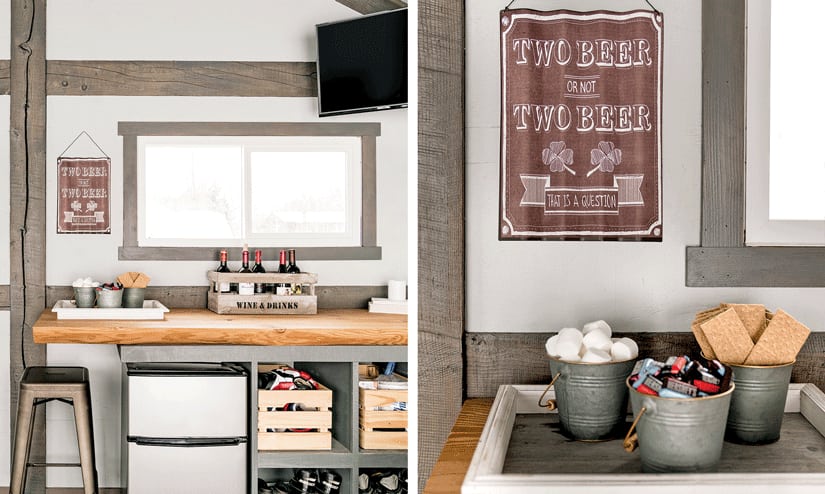 While the kids practice bunny-hops or host shinny showdowns, the adults chat or watch Calgary Flames games. Most nights, pizza delivery is on the menu: “Our local pizzeria knows all about this place,” says Kristyn. “When we order, the guy asks, ‘skate shack or house?’” For dessert, s’more-making essentials sit at the ready.

This place is an arena for lighthearted fun, as the playful wall hanging over the built-in bar attests. 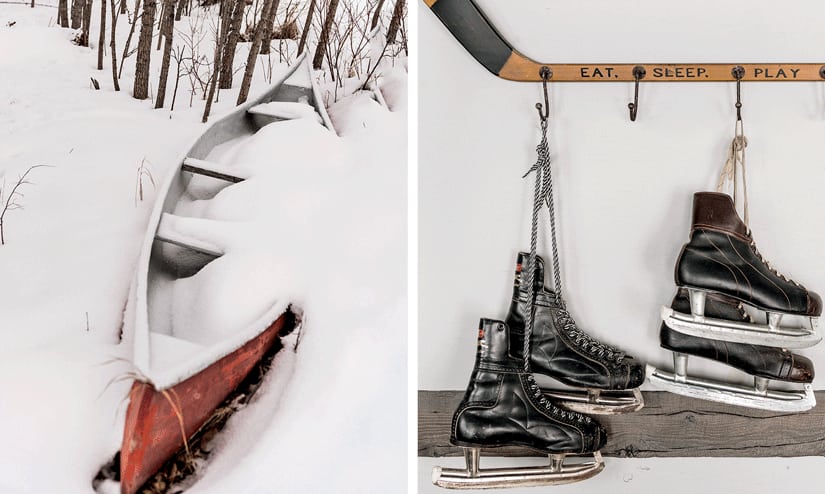 Throughout the space, open storage solutions like cubbies and hooks turn skate gear into decor. Made from a vintage-look hockey stick, this wall hook rack is a whimsical case in point.

Surrounded by grandkids - but with a quiet spot all his own - this cottage has created the chic retreat of his dreams.