The art of mixing — styles as well as indoor and outdoor elements - is masterfully demonstrated in this Oakville, Ont. home.

You’d think that Michele Hatziioannou, who co-owns House Warmings, a pair of popular home decor stores in Oakville, Ont., with her husband, Leon, would give into the temptation to change up her furnishings every so often. Yet, despite almost unlimited access to the latest looks, Michele is not one to submit to any particular trend. “My taste is very eclectic,” she says. “I gravitate to so many different styles that I hate committing to just one.”

The truth of her words resonates on a tour of the 4,000-square-foot two-storey Oakville home she and Leon share with their three teenagers (Simon, 19, Claire, 17, and Cameron, 15) and Oliver the Maltese dog. Even with the couple’s constant connection to what’s new in decor, the look of the space is anything but showroom: This is a house with stories to tell. From treasured antiques that the couple purchased as newlyweds to framed artwork the children made when they were little, it’s a home that’s been furnished with love – an integral aspect of Michele’s design approach. “I decorate with my heart,” she says. “If I see something that speaks to me, I make it work, no matter what.”

When Michele and Leon bought the property in 2000, the kids were young, so they knew they’d have to expand the original 2,200 square feet for their growing family (a 2005 home renovation extended the kitchen and added a family room and master suite). But any initial space concerns were trumped by the home’s location, just three blocks away from Lake Ontario. Call it the lake effect, but an oasis-in-the-city beach house vibe now permeates the space, indoors and out.

Inside, Michele capitalized on this with a mostly crisp white backdrop punctuated with textured accessories. Gold and brass accents in the dining room and hallway layer in sunny warmth, while pops of elemental blue, most noticeable in the living room drapes and the kitchen’s watery backsplash, emphasize the seaside-chic feeling.

To keep the transition from indoors to out cohesive, Michele relied on continuity: the use of plush, interior-worthy elements outside (like a sectional, drapery and toss cushions), natural outdoor materials inside (such as wooden furniture and accents that include fresh florals and a bowl of beach stones) and the same neutral colour palette for both.

Outside, seaside chic takes on a cottage feel under a canopy of trees. Neutral and casual, the front porch and back patio were inspired by trips abroad, especially to Europe. “Spaces there rarely look shiny and new, but are effortlessly elegant,” says Michele, who wanted her outdoor living areas to be just as chic as they are comfortable and functional for the flood of family and friends who visit. So she added a poolside pergola with ample seating, an indoor help-yourself bar just off the patio and heat lamps on the covered porch to extend time spent outside.

It seems to be working. “Last summer we had friends over in the early afternoon for a swim, and we never left the backyard,” says Michele. “We were supposed to walk to a waterfront festival for dinner, but we were so cozy, we just lounged there until bedtime.” We expect there will be many more lazy days with friends in this lovingly curated house that’s perfectly welcoming both inside and out. 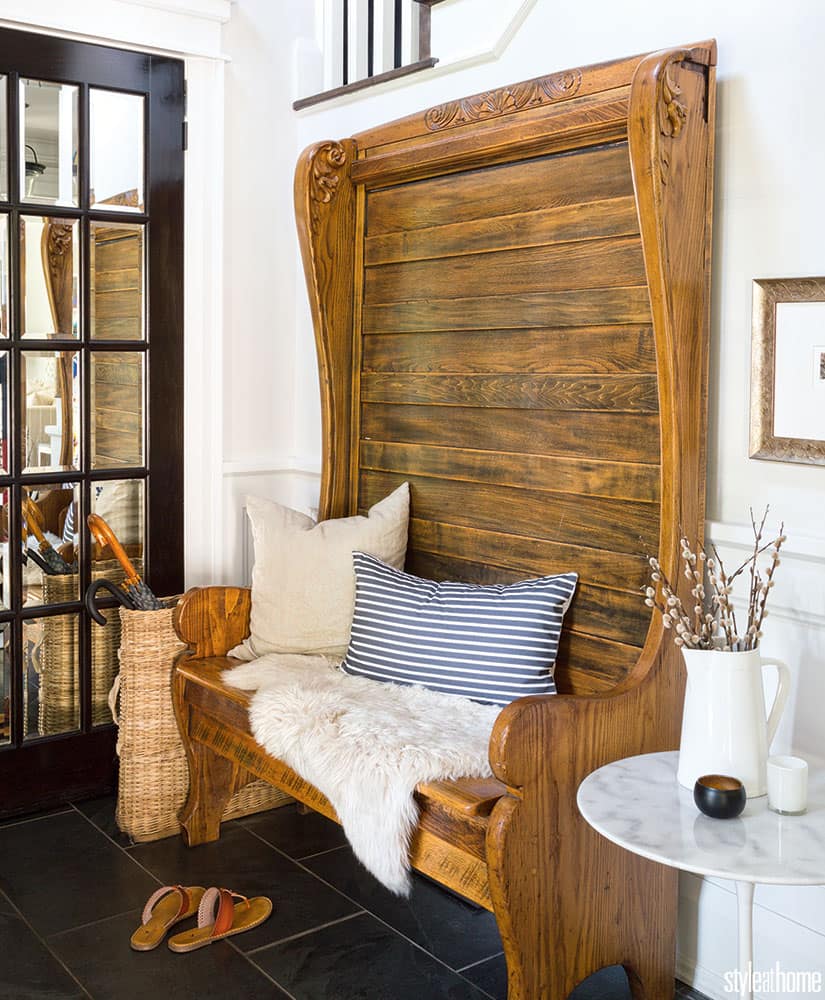 A show-stopping antique bench brings an air of eccentricity to the front hallway. "This is one of the first pieces my husband and I bought after we were married," says Michele. "It's made of wood salvaged from a church organ and pew. Twenty-two years later, we still love it! Our dog, Oliver, often sleeps here during the day while waiting for us to come home." 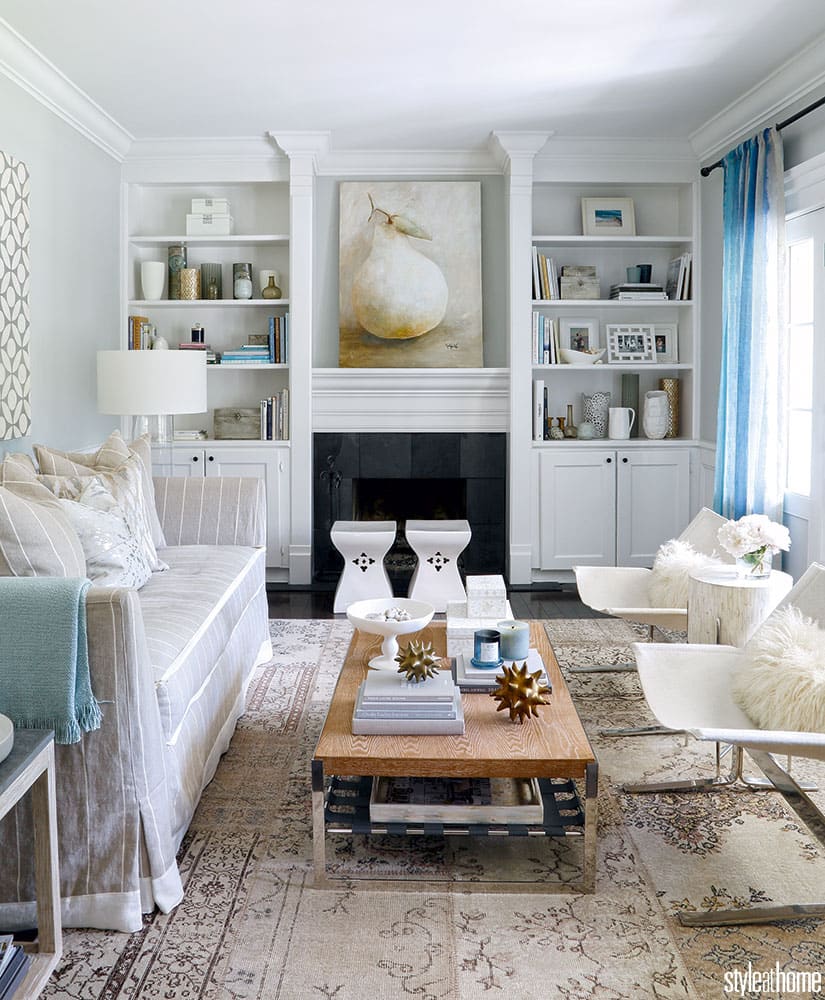 Michele's favourite place in the house, the living room, features a wood-burning fireplace flanked by custom built-in shelving. "This is a room for sitting, relaxing and reading, and there's usually one teenager and/or the dog sprawled on the sofa," she says. The sofa is fitted with a striped linen slipcover for easy cleaning. Drapes and accessories in subtle shades of blue feel like a fresh seaside breeze in the otherwise neutral space. 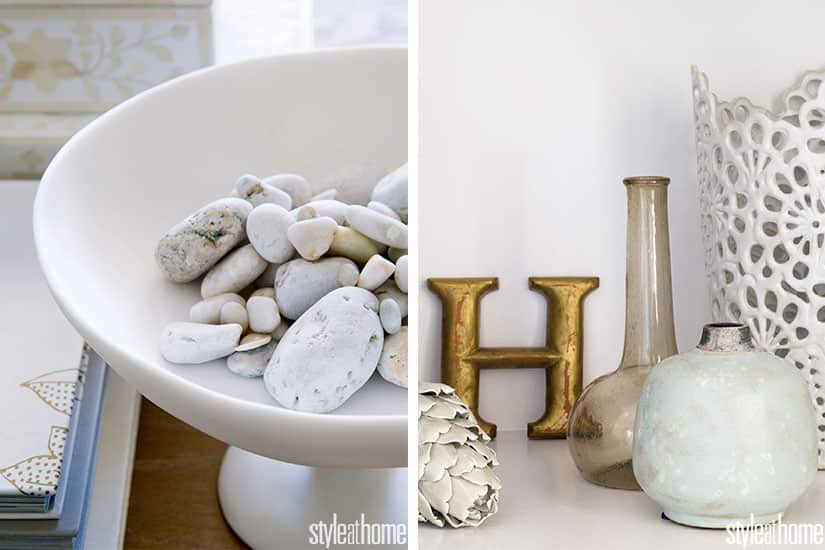 Rustic details can be found throughout the decor, such as a patinated gold initial, smoky glass vase, and pinecone sculpture and smooth organic pedestal bowl filled with pebbles, subtly and elegant reference the outdoors. 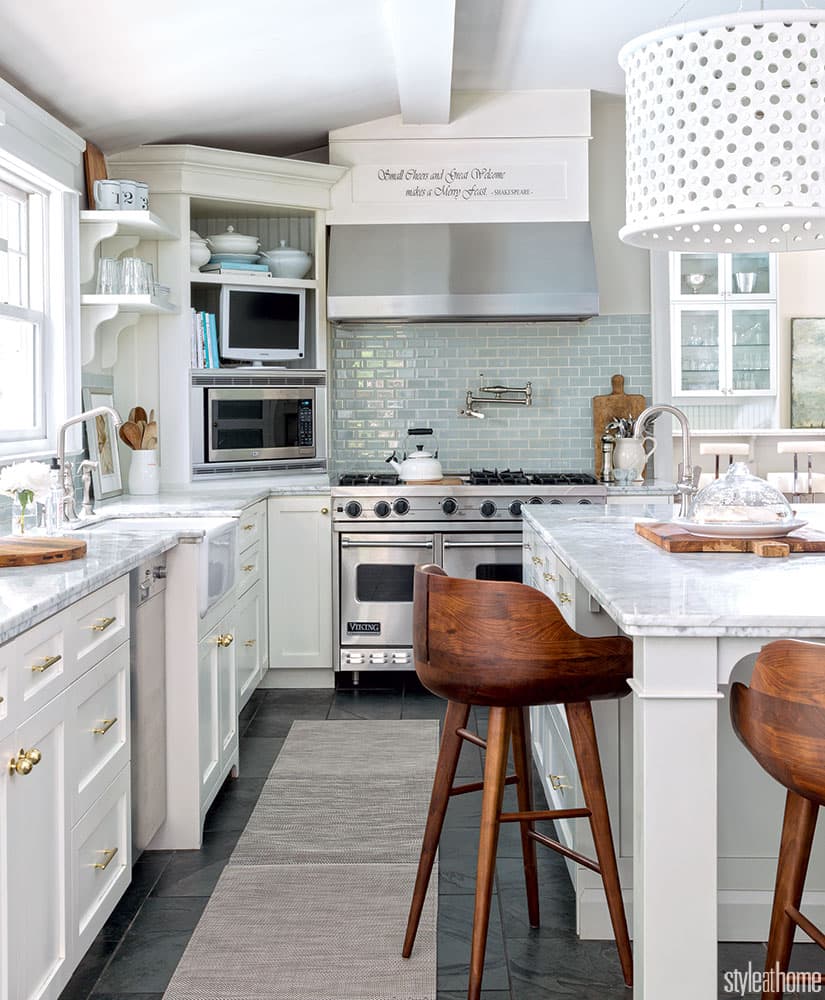 "The overall look of our kitchen is traditional Shaker style with an organic twist," says Michele. Brass hardware and walnut stools introduce warmth to offset the crisp white cabinetry and Carrara marble countertops. 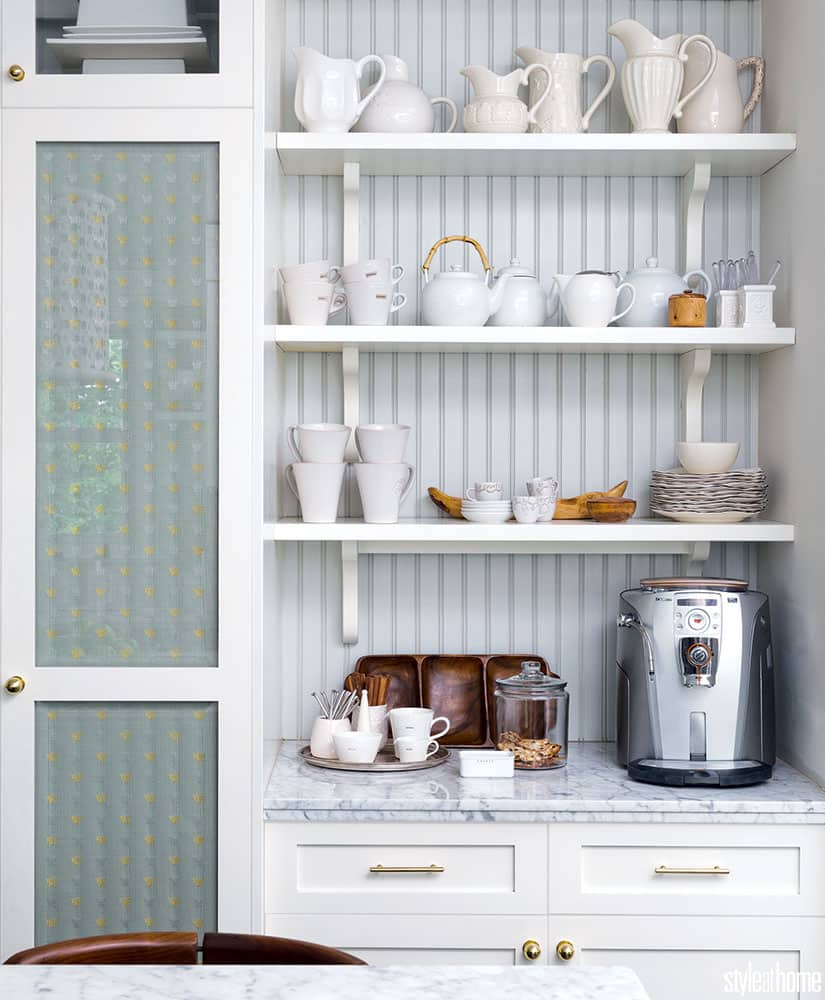 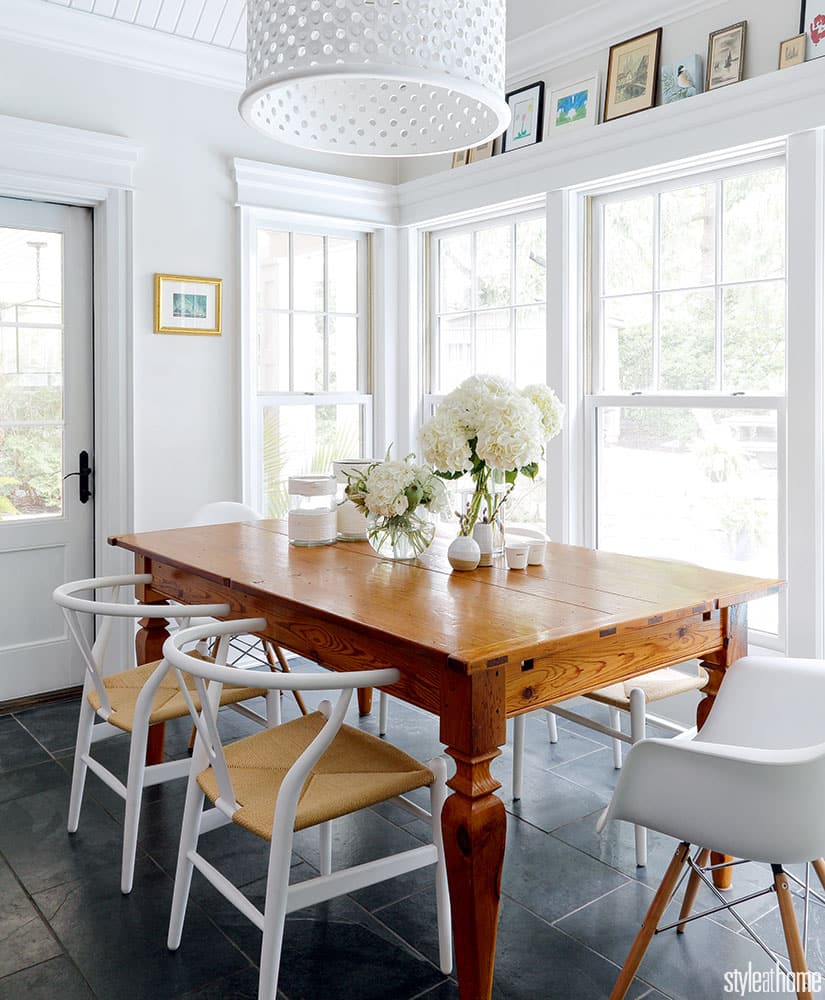 Homeowners Michele and Leon Hatziioannou had the wooden table made for the kitchen's eat-in area about 20 years ago. "It's part of the family," says Michele. "It's the table at which our children have eaten since the day they were born." 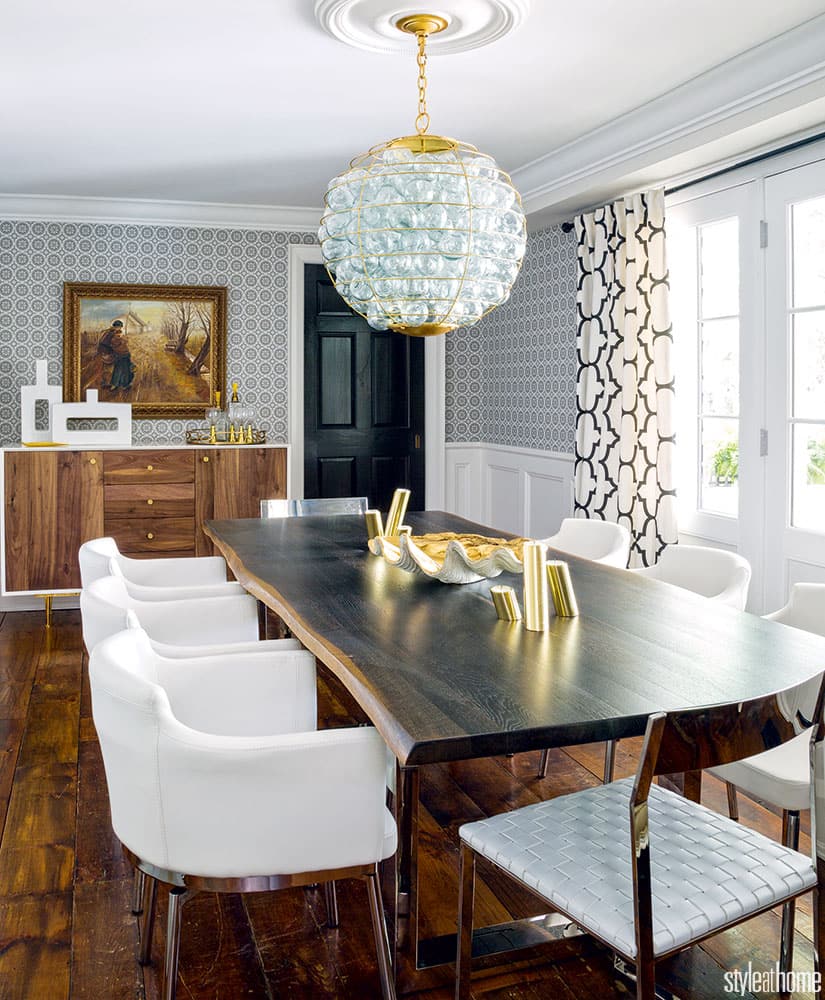 The dining room takes on a more formal air than the rest of the house with Michele's fearless mix of chrome and gold accents against bold geometric patterns on the wallpaper and drapery. Michele's favourite element here is the standout pendant light. "It's a gold-finished metal cage filled with hand-blown glass balls," she says." It's ridiculously heavy — we actually had to reinforce the ceiling to hang it." 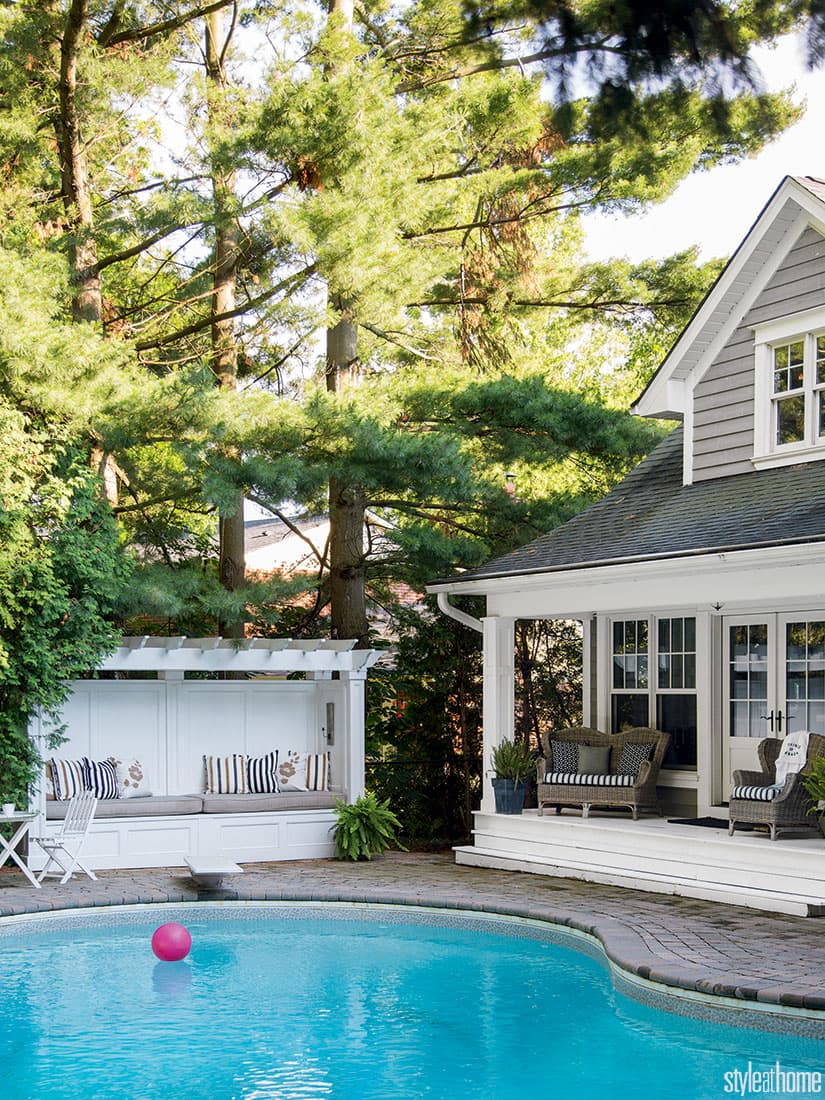 The pool area features a custom pergola with deep bench seating for luxurious lounging. "It's basically the length of two twin mattresses, so it's a great place to read or take a nap," says Michele. A small white-painted wood patio set is a quaint spot for a quick poolside snack. 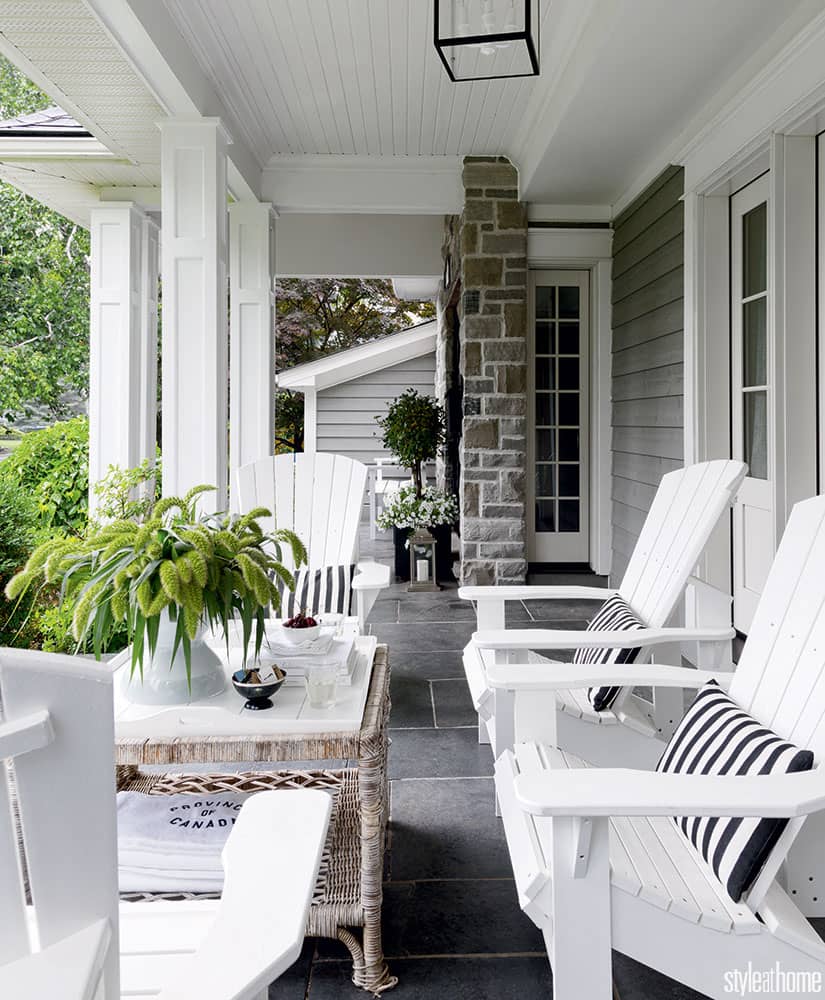 "We sit on the front porch as often as possible," says Michele. "It's the best spot to catch the late-afternoon sun." The black slate flooring strikes an elegant note when contrasted with the white Muskoka chairs that Michele loves for their flat, straight arms — "a perfect place to set your coffee or wine," she adds. The natural palette of the backyard's seating area was a necessity. "I would do white everything if I didn't have kids or a dog!" says Michele. Graphic toss cushions lift the neutral tones, punching up the look.

Top 5 Secrets for Bringing the Indoors Out

2 Open up: "We have a lot of doors leading out to the backyard. When we open them all, it feels like one large outdoor space."

3 Help yourself: "We built an indoor bar just inside the French doors that lead to the pool, so everyone can help themselves without venturing far indoors. The beer taps my husband installed there are a favourite among our friends."

4 Set the table: "I don't like using plastic glasses and dishes, so for outside I have a great set of white enamelled-tin dishes and Duralex glasses. They're real glass but won't break."

5 Get messy: "My husband has become an expert oyster shucker. But oyster shucking is kind of messy and definitely something you should do outside, so it has become one of our favourite backyard entertaining activities. It's easy and doesn't involve much prep work!"