The oft-overlooked basement steps into the spotlight with this chic main-floor-worthy design.

Life below ground has its challenges. Anyone with a cellar knows that. Damp air, uneven floors and less-than-pretty pipes are just the beginning. “When it comes to basements, people seem to fall into two categories – those who ignore them completely, and those who cram them full of storage,” says designer and homeowner Christine Dovey. Christine confesses she fell into the latter group, but wanted to make a change when she set about reclaiming and redesigning her Oakville, Ont., basement. “Eighty percent of the space was filled with junk,” she says.

For Christine, the big cleanup was born of necessity. She and her husband, Ian, have four active kids – three of them under the age of 11 – and both work from their 2,200-square-foot (not including the basement) home. “My desk was the bed, and his was the kitchen table,” she says.

Renovating the 1,100-square-foot basement would lend lots more living space, creating extra room for work and play. It just made sense. “I decided to do it as part of a six-week design challenge,” says Christine. “But I quickly regretted the decision of working on such a tight timeline. What in the world was I thinking?!”

The reno required creative solutions to tricky architectural challenges. For example, the basement’s supporting walls divided it into a series of small, awkward “rooms.” Some of these areas were elevated, requiring steps to reach them. Others had a less-than-pleasing view of what Christine calls “the guts of the deck.” Yet it was precisely these quirks that, in the end, resulted in two super-cool elevated lounge areas, a cozy fireplace nook, an intimate gallery-like dining area and even a secret playroom. Using layers of neutral-toned textures and pattern alongside a mix of Mid-Century Modern, contemporary and downright eclectic furnishings gives this below-ground space first- floor-worthy appeal.

“I’ve never worked so hard in my life,” says Christine with a laugh. “I was DIY-ing my heart out! I assembled so much furniture, I needed bandages on my hands when it was all done.” But now the family spends almost all their down time here. “Let’s face it. Nobody ever wants to go to the basement,” explains the designer. “But when you give it a voice, it becomes a destination.” 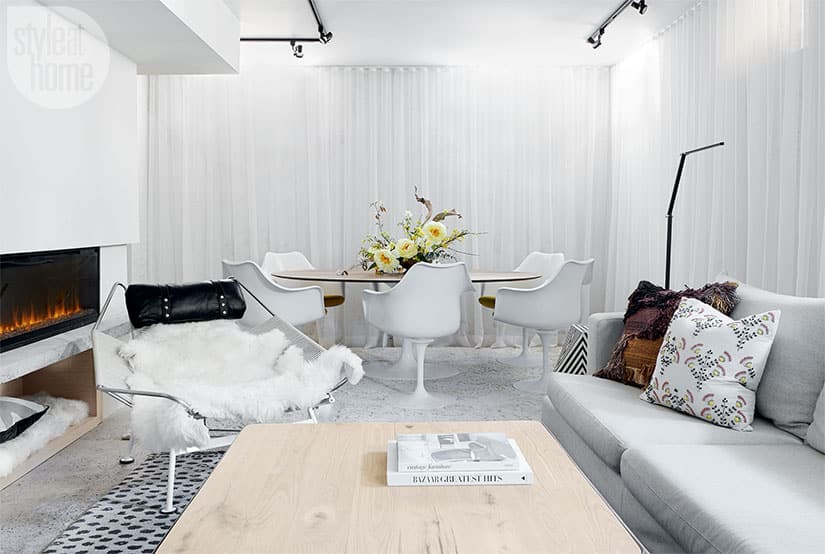 In the dining area of this cozy chic basement living space, a wall of sheer curtains disguises casement windows that have an unsightly view. Swivelling dining chairs and track lighting give the room a sleek gallery vibe. The leather lounge chair, which features a comfy fur seat, is one of homeowner Christine Dovey’s favourite places to curl up with a book. The sectional, meanwhile, fits her family of six comfortably. 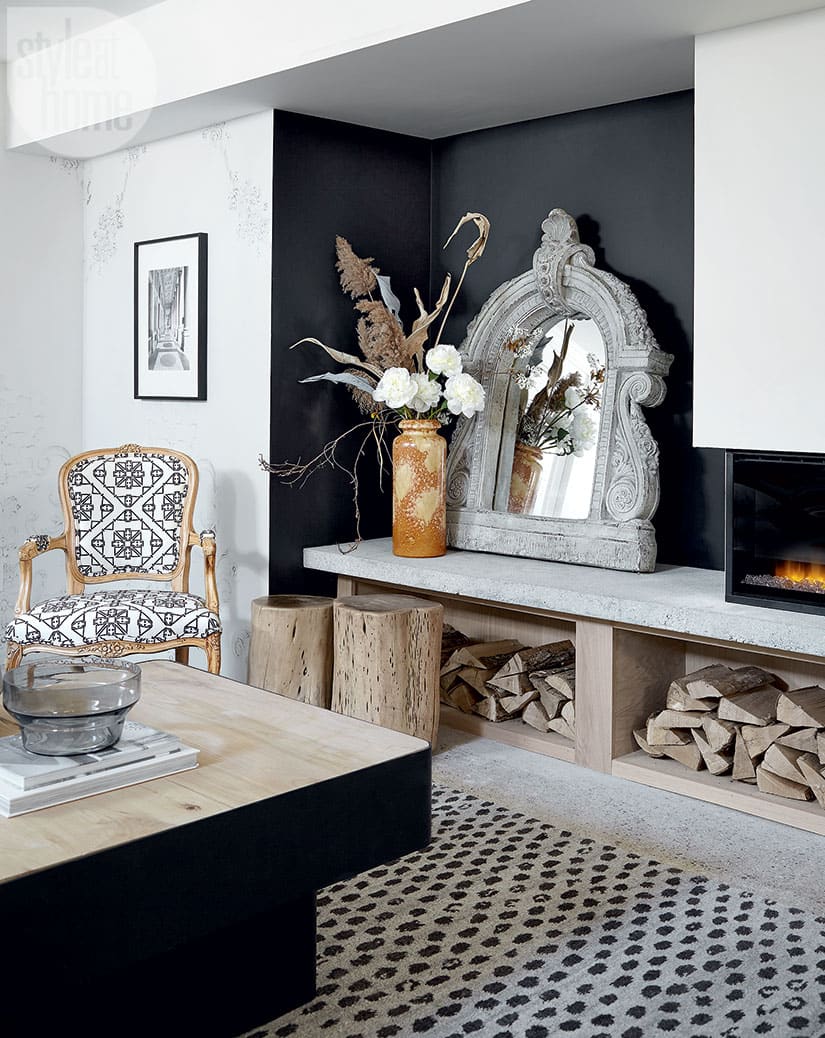 Though the fireplace is electric, firewood nestled beneath lends homey appeal, while the dark-painted nook adds drama. 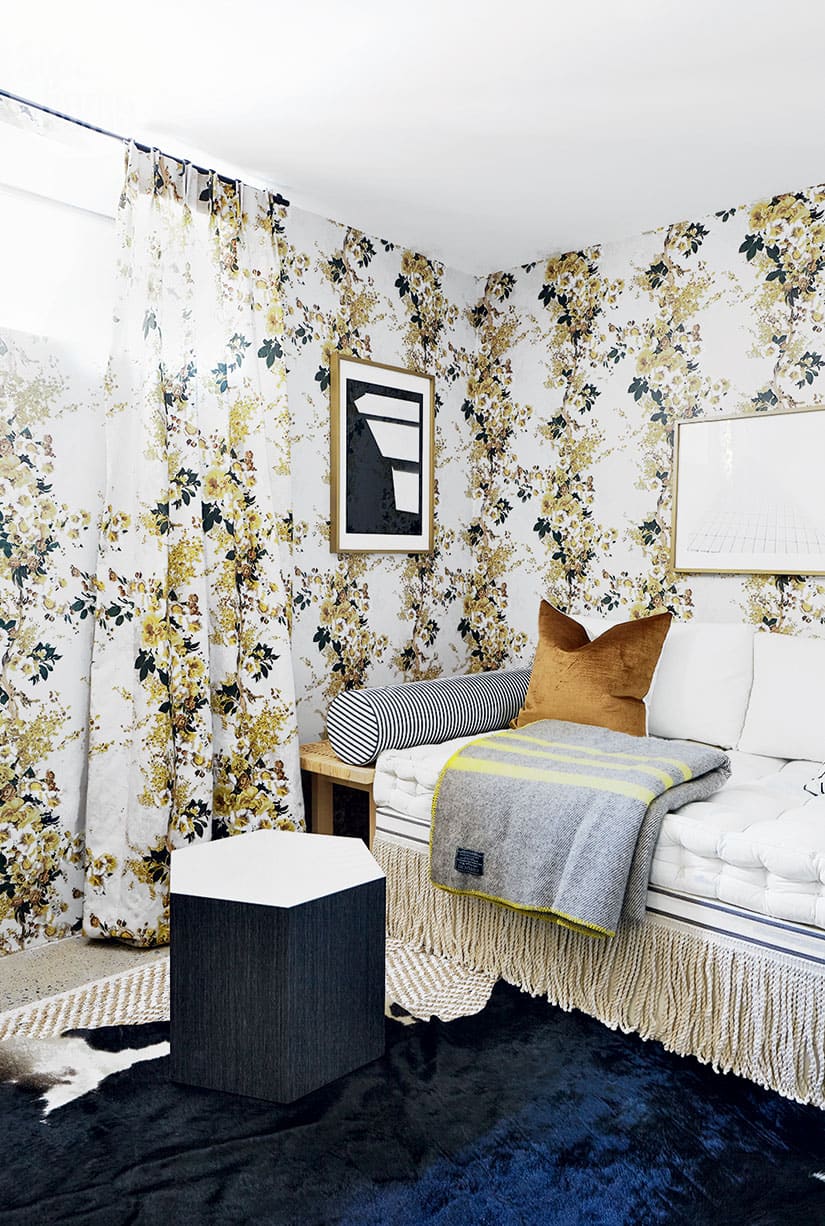 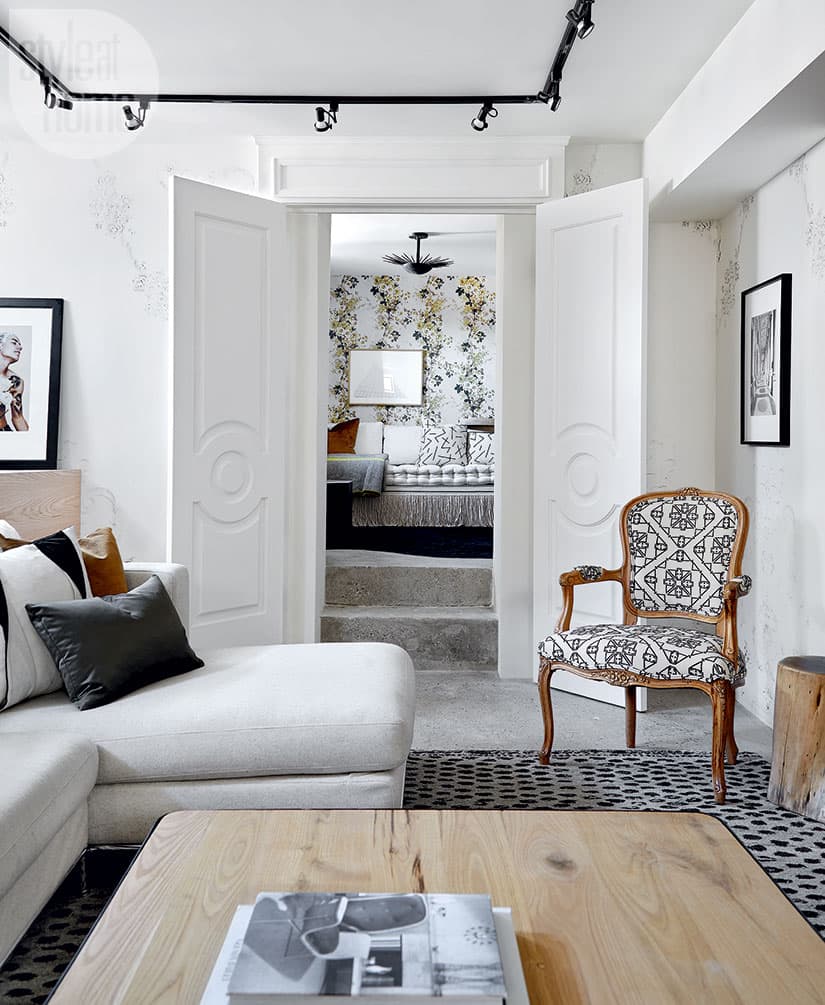 The family’s hangout space gives way to Christine’s elevated “lady lounge” via two stately doors and up a couple of steps – it’s a lovely trip to a luxe destination. Christine refers to this daybed as her proudest DIY moment. “I glued fringe onto a pine box, then plunked this tufted mattress on top,” she explains. The glass-topped hexagonal table contrasts with the old-fashioned floral wallpaper and matching drapery. 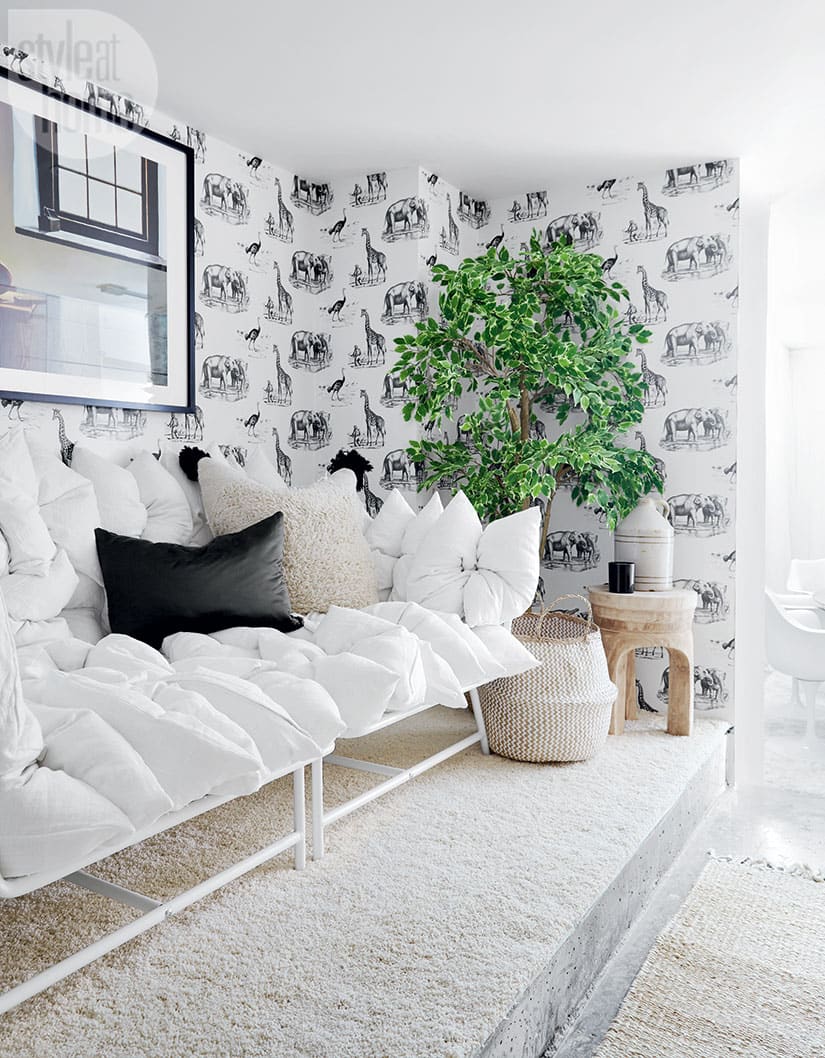 “It’s like climbing onto a cloud,” says Christine of the pillow-plump daybed in the elevated space off the hallway. Nestled in a nook lined with animal-patterned wallpaper and a toe-tickling rug, the room is an end-of-day oasis. And located right across from the hidden playroom, it’s a great spot for watching the kids. Since the basement isn’t bright enough to support flora, Christine “planted” an artificial tree for a green-living effect. 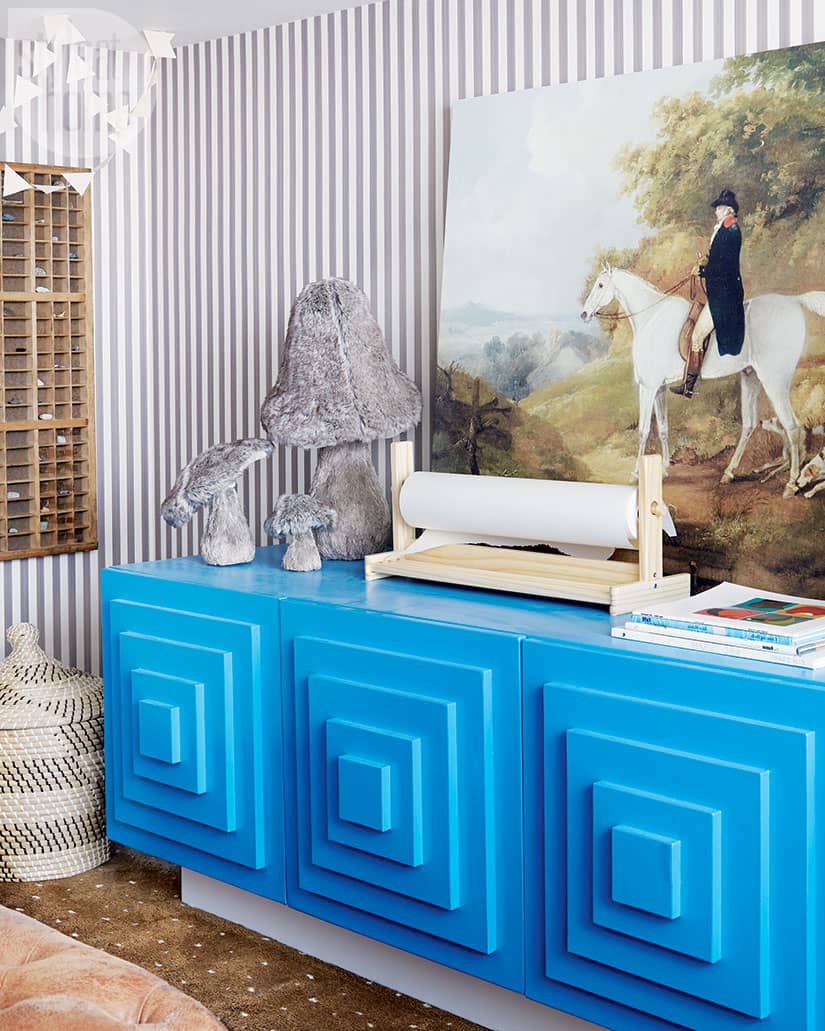 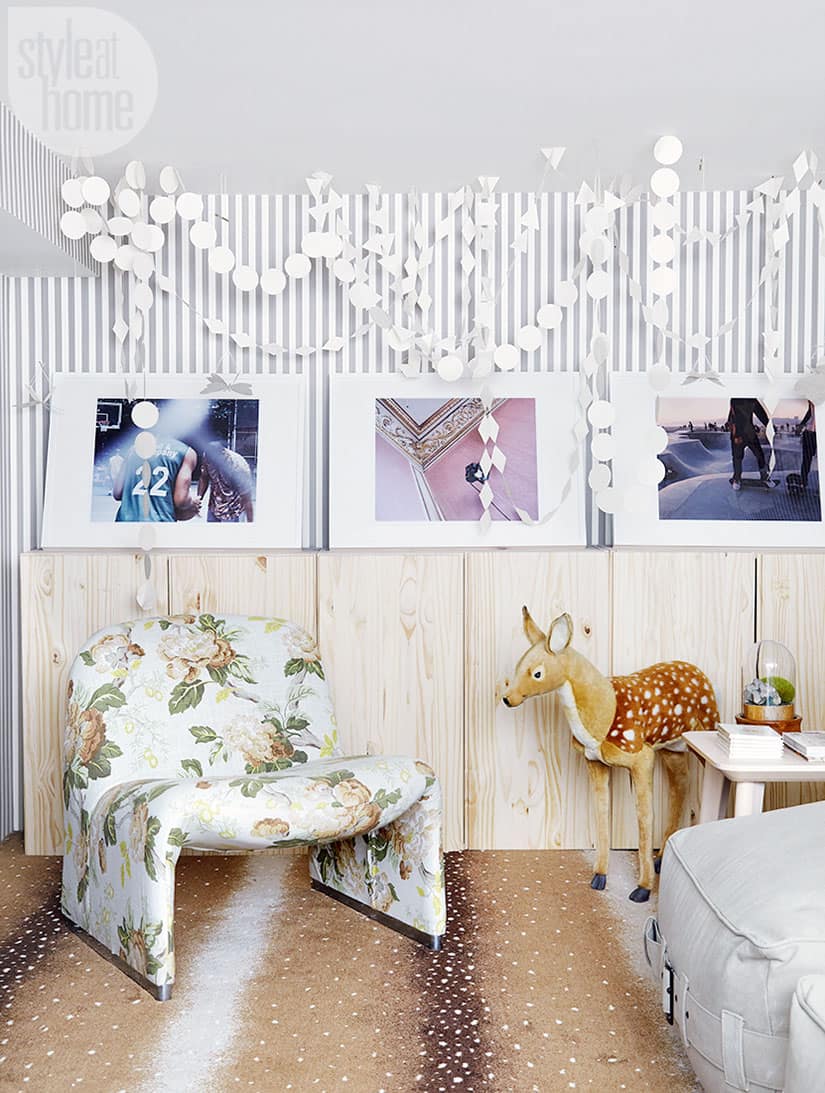 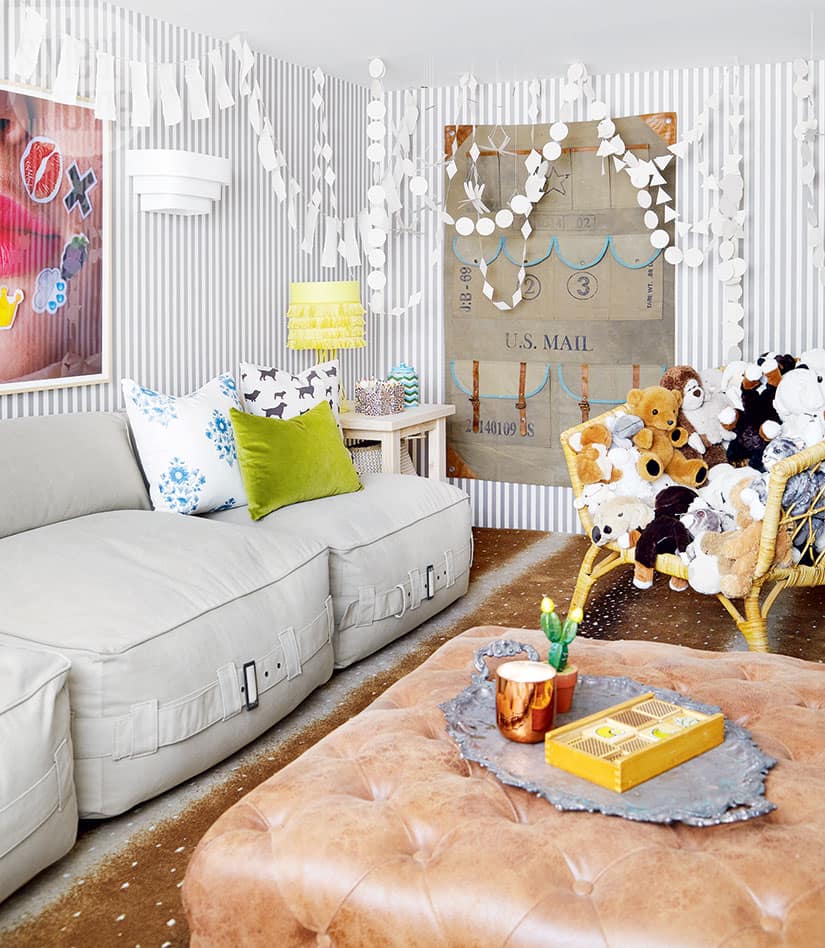 The hidden playroom is a wonderland. Wrapped in striped wallpaper with fresh features like a custom geometric-door sideboard, the room has an eclectic kaleidoscopic vibe. Fun kid-friendly details include a vintage typeface holder that houses one kid’s rock collection, a durable beanbag sofa and a rattan armchair fitted with a zany seat made of stuffed animals attached to its frame with zip ties. The regal landscape painting above the sideboard showcases Christine’s signature contrast of formal and playful.