How a handy couple lovingly made this 1960s Mississauga, Ont., home their own.

You would think buying a home in today’s tough housing market would come with many compromises, but not so for Catherine Therrien and her husband, Aaron Putman. When the couple began their search, they had a certain type of house in mind and a neighbourhood picked out — and they weren’t going to settle for anything less. Judging by this gorgeous gem in a peaceful south Mississauga, Ont., area, their determination paid off in spades.

The couple’s house-hunting journey began about four years ago, when they decided they were tired of climbing up and down the stairs of their four-level townhouse. “Our goal was to find something as flat as possible,” says Catherine, owner of Catherine Sophie Design (and former Style at Home managing editor). “It was our fourth time moving in 10 years. So we thought, if we’re moving again it has to be to the right place.”

For these consummate DIYers, the right place was a house they could work on and make their own. “We wanted something untouched,” she says. “I didn’t want to move into a house with a newly renovated kitchen and then be stuck with someone else’s design.”

By the time Aaron found this place online, Catherine was discouraged. After all, it had been a daunting full year of scoping out the neighbourhood and going to every open house on the block. But it was fortunate Aaron forced her to take a look, because they finally found the perfect fit.

Along with having as few stairs as possible, the 1,500-square-foot 1960s side-split exhibited a pride of ownership that’s rarely found. “It was a solid house, and we liked the renovations that had been done,” says Catherine. Along with adding a new roof and windows, the previous owners had taken down walls to open up the space and built an extension in the form of a light-filled sunroom. The handy couple saw the house’s potential and knew it was a project they could handle – more cosmetic than structural. “It sounds cliché, but we fell in love right away,” she says.

As soon as they took possession in August 2015, they began updating the space, which included removing carpets and tiles, gutting the kitchen and installing flooring. One especially tough job involved redoing the dining room ceiling to achieve a coffered look. “We were a bit naive at first,” says Catherine, “and thought we’d get the main floor done in a few weeks, no problem. How did we think that would happen?” In the end, it was a labour of love that took one-and-a-half years of working every spare moment they had.

The airy space created on the main floor and lower level was a result of what they didn’t want as much as what they did. Their townhouse had a colourful palette, and to Catherine’s tastes, always felt way too dark. So here, they created a bright, almost ethereal envelope with oiled oak floors and serene pale grey walls throughout. Then they incorporated a neutral palette with a few judicious hits of colour. Any architectural elements that were installed have simple profiles, in keeping with the house’s age and design.

Catherine’s refined style, combined with her penchant for hunting collectibles and all things vintage, is apparent throughout the home. The resulting boho-chic look is comfortable, not contrived. “I love that California-cool vibe that’s easygoing, light-filled and a little bit eclectic,” she says, “but not overdone.”

With a good portion of the house finished, Catherine and Aaron were looking forward to enjoying the fruits of their labour, so to speak, putting up their feet and taking a break. “Our plan was to finish the outside and then not do anything for a few years to recoup some of our costs,” says Catherine. But a happy turn of events changed the plan. “In September I found out I was pregnant, and I thought, oh man, now we gotta do the upstairs!” 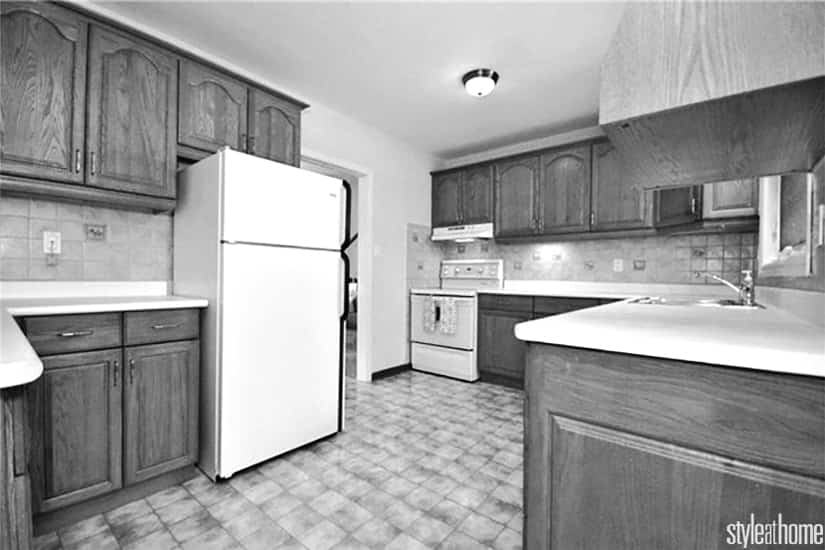 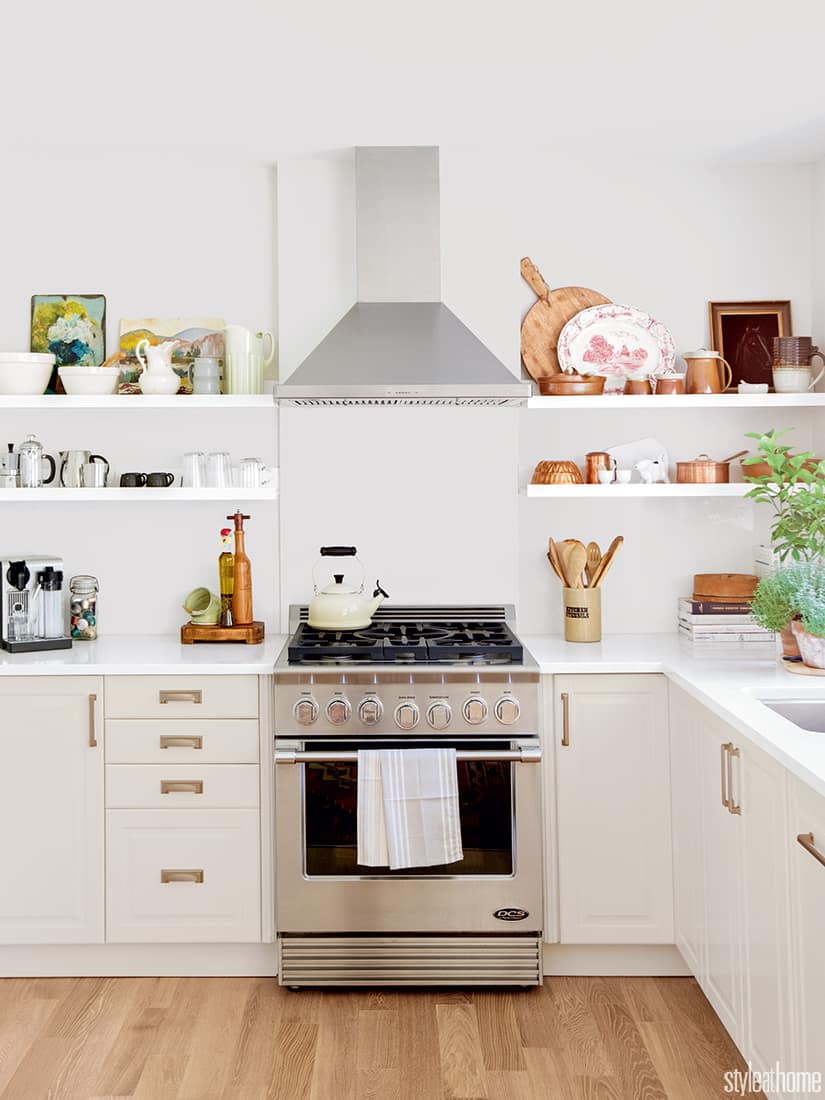 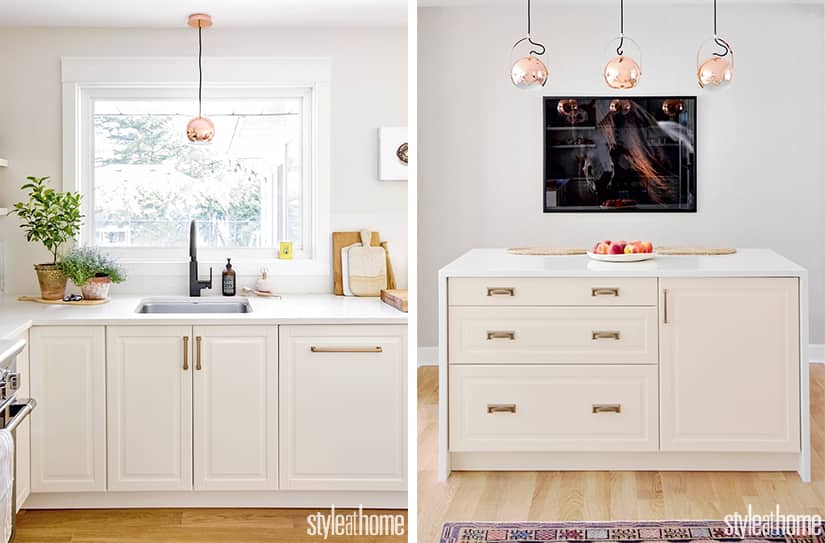 The couple gutted the kitchen and combined it with the original dining room, turning it into one big open space with an island.

Within the bright neutral kitchen, details like the copper-toned pendant light, matte black gooseneck faucet and champagne-finished hard-ware lend subtle contrast and warmth. The quartz countertop material was also used to create a backsplash for a sleek seamless look. It’s super easy to keep clean. “I don’t like tile because I don’t want to bother with grout lines. I can’t stand dirty stained grout,” says Catherine. 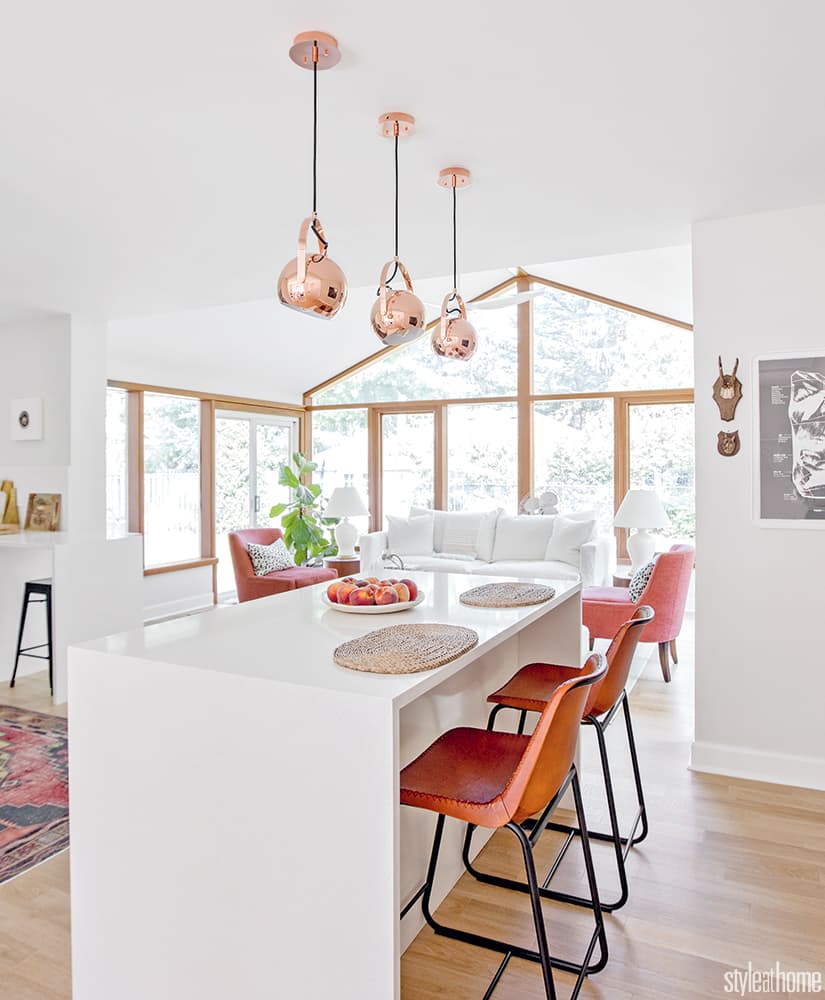 The kitchen island, which features a quartz countertop with clean-lined waterfall edges, is a casual spot to enjoy a meal. 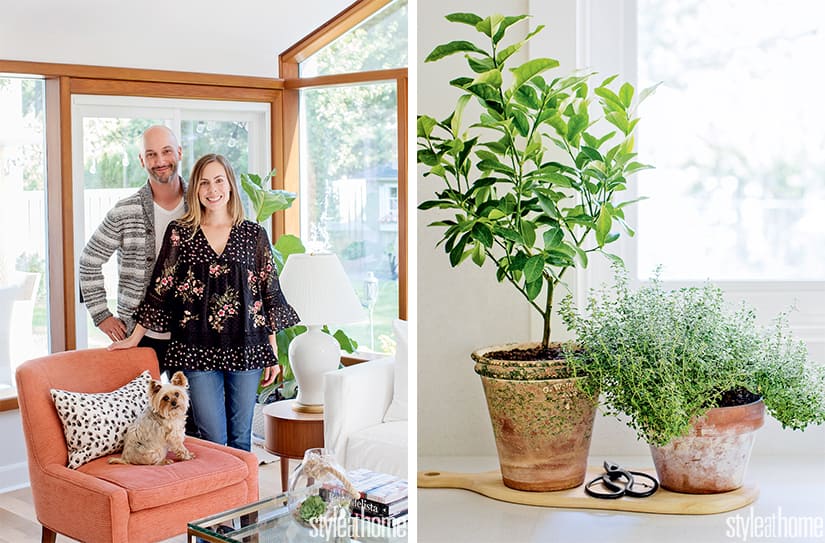 Catherine and her husband, Aaron Putman, with their beloved 12-year-old Yorkshire terrier, Chloe. 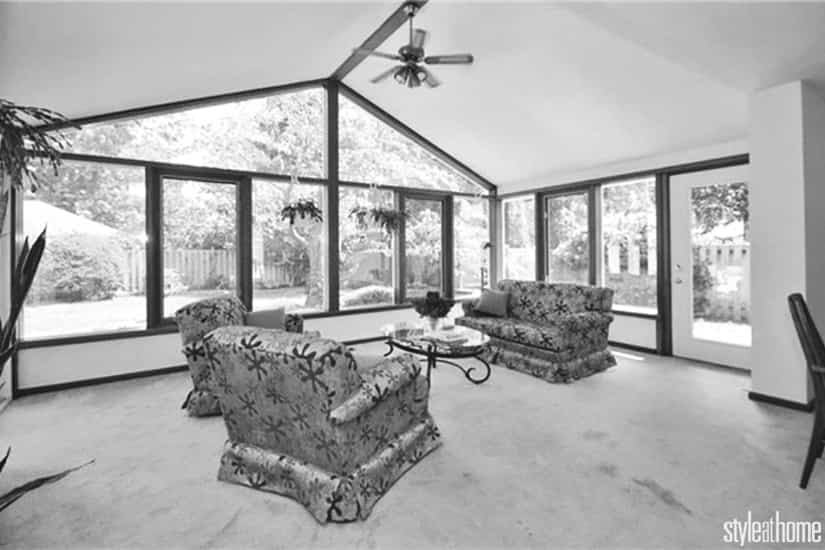 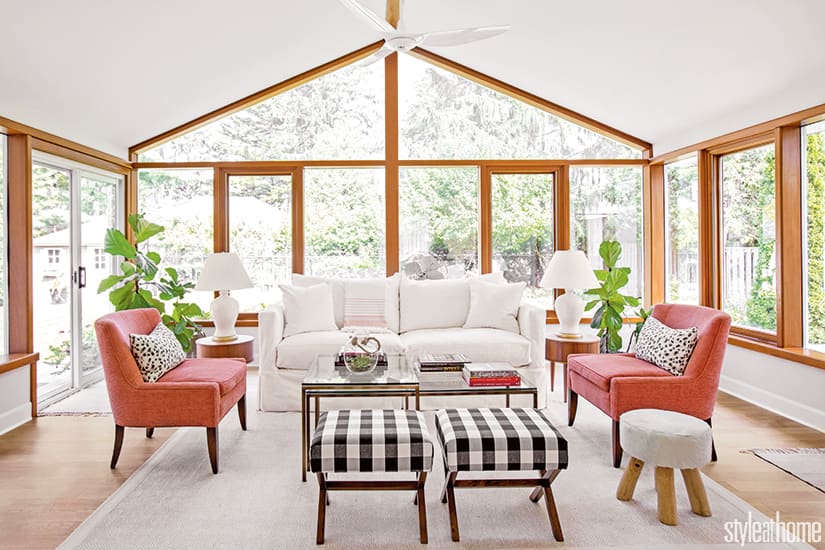 In the sunroom — an addition the previous homeowners built in the 1990s — the couple created a cozy living area with a plush sofa, persimmon-coloured slipper chairs and ottomans upholstered in a striking buffalo check. 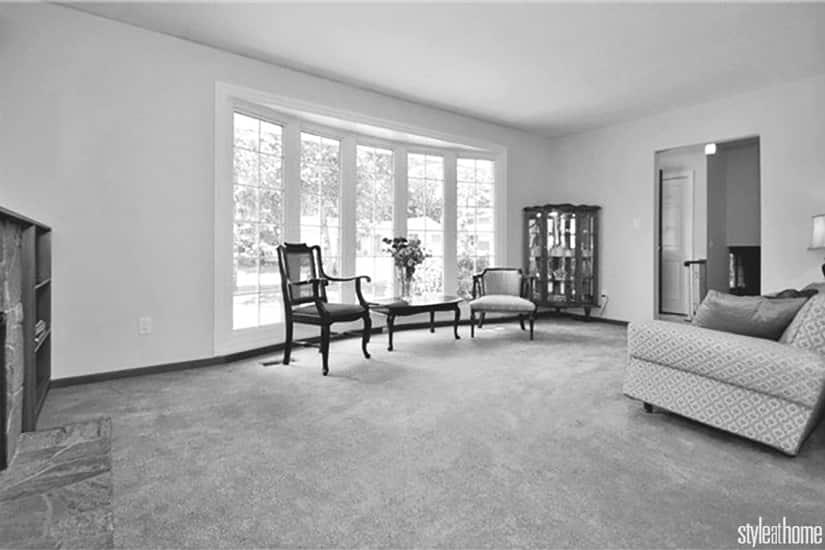 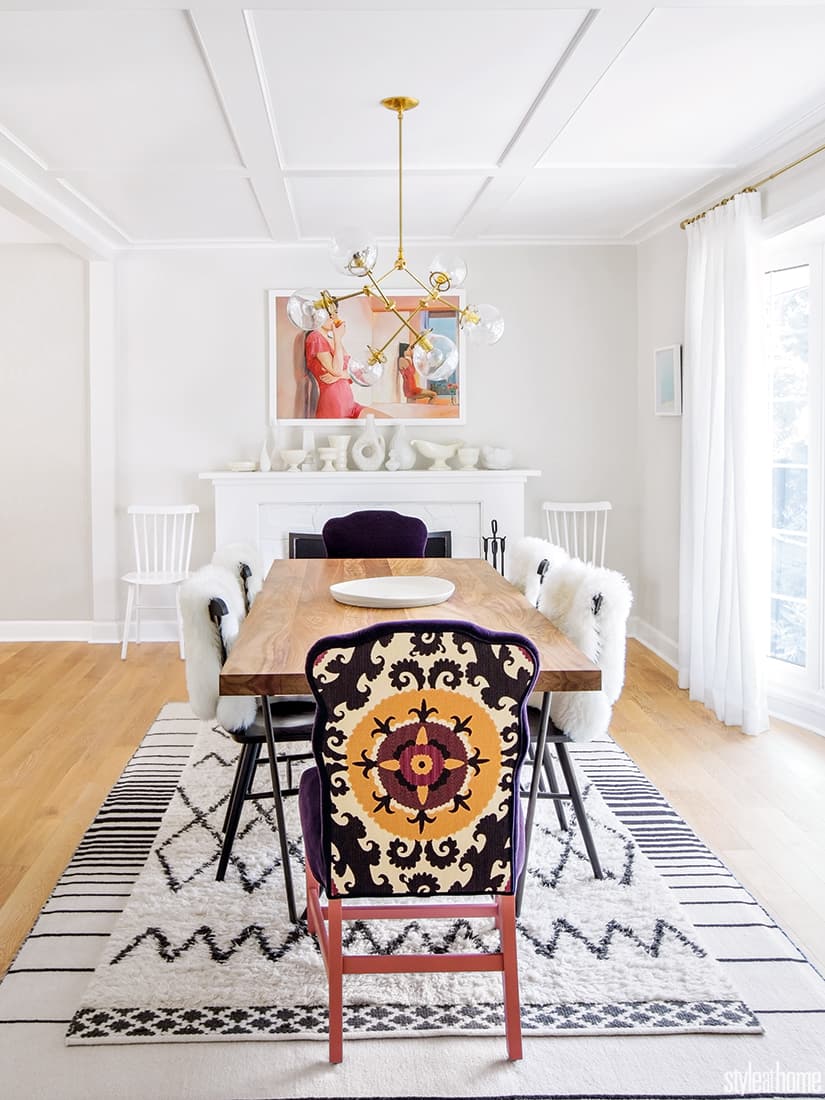 The sleek wooden dining table, surrounded by mixed and matched chairs, suits the scale of the room, and layering elements like the two rugs and sheepskin throws lends coziness. The modern chandelier, an investment piece, follows the length of the table and serves as a sculptural focal point while keeping sight-lines open. 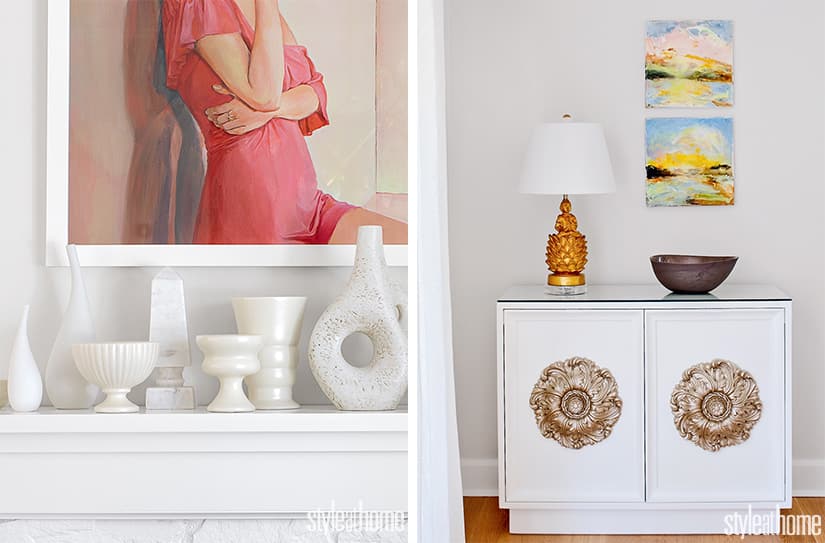 An antique cabinet with spectacular hardware, which Catherine had spray-painted, serves as liquor storage in the dining room.

Catherine and Aaron's dos and don'ts for a DIY reno:

Do your research. Consult various resources, like how-to websites and online videos for information, but make sure you’re complying with your province’s building codes. Take advantage of free seminars offered at big-box stores.

Don't bite off more than you can chew. Know your limitations. “If you can’t paint a wall, maybe a full-scale DIY reno isn’t for you,” says Catherine.

Do contact your city’s building department if you have any questions about permits.

Don't feel pressured to do everything yourself. Hire pros when it comes to electrical and gas work and other tasks beyond your skill set.

Do consult sites like Home-Stars when looking for reputable tradespeople. Avoid the friend-of-a-friend scenario.

Don't believe the unrealistic timelines of home renovation TV shows. Also, go into a renovation knowing that you’ll most likely spend every weekend and any vacation time you have working on the project.

A DIY-reno for a boho-chic home