A 19th-century home on the Atlantic coast gets a modern update that honours its history.

A quiet vacation destination a few hours east of the bustling Big Apple, Shelter Island, N.Y., is full of heritage homes and incredible vistas, providing many city dwellers the perfect seasonal escape. One such New Yorker is interior designer and stylist Betsy Morgan, whose summer home is in the sleepy enclave. The original character of the 1887-built abode won Betsy’s affections, but she was eager to leave its dark disjointed rooms in the past. Though the large house had seen exterior updates in the 1980s, the entire place, inside and out, was due for a major overhaul, and the designer was up for the task.

The plan was simple: Brighten the home by stripping off layers of wallpaper and create a fresh envelope with white paint; then, maintain the brightness with a minimalist approach to furnishing. To make things interesting, Betsy didn’t restrict herself to just one – or even two or three – decorative influences. The spacious rooms embrace an unexpectedly broad mix of styles, including traditional, contemporary, country and urban, plus a hint of coastal chic thrown in.

The resulting look deftly honours the home’s history, placing the spotlight on period-appropriate architectural features like arched doorways and mullioned windows, while providing a light and airy interior befitting this modern-day designer. 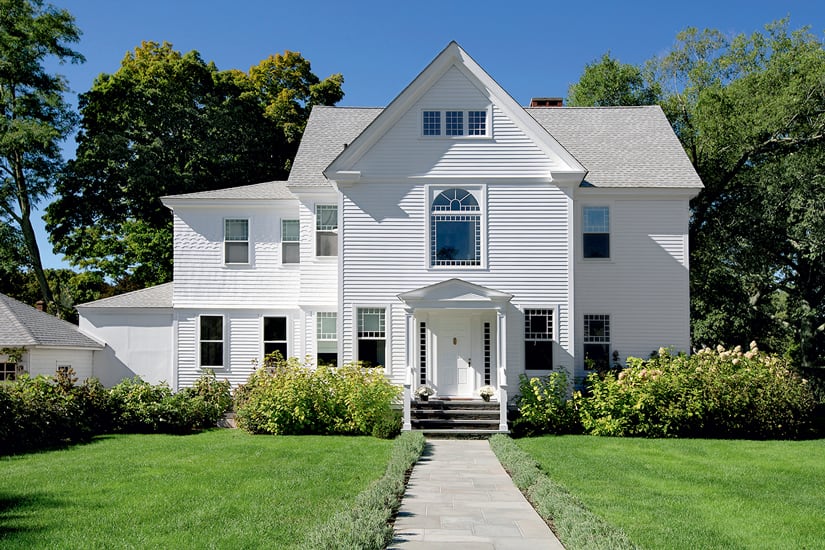 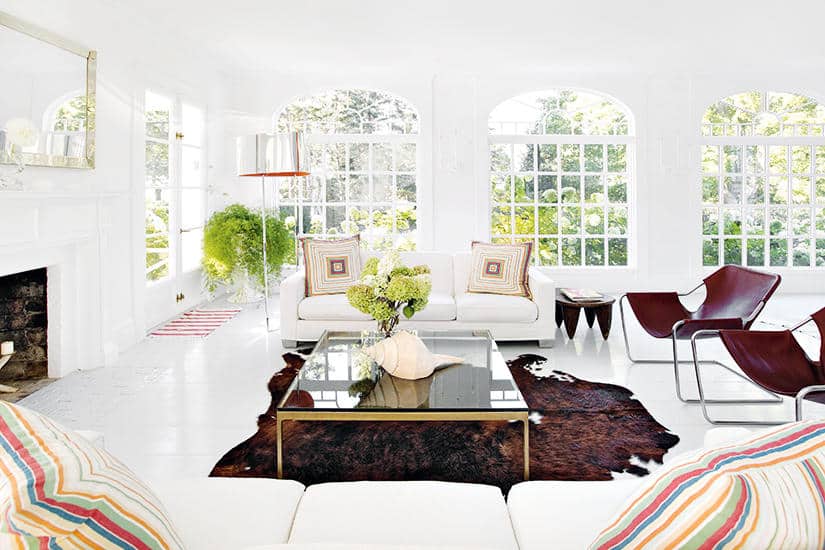 Cream-coloured sofas keep the space bright and neutral. A select few dark elements, including Mid-Century Modern-style chairs and a cowhide rug, introduce some grounding contrast. Small pops of pattern on the toss cushions imbue the room with casual beachy flair. 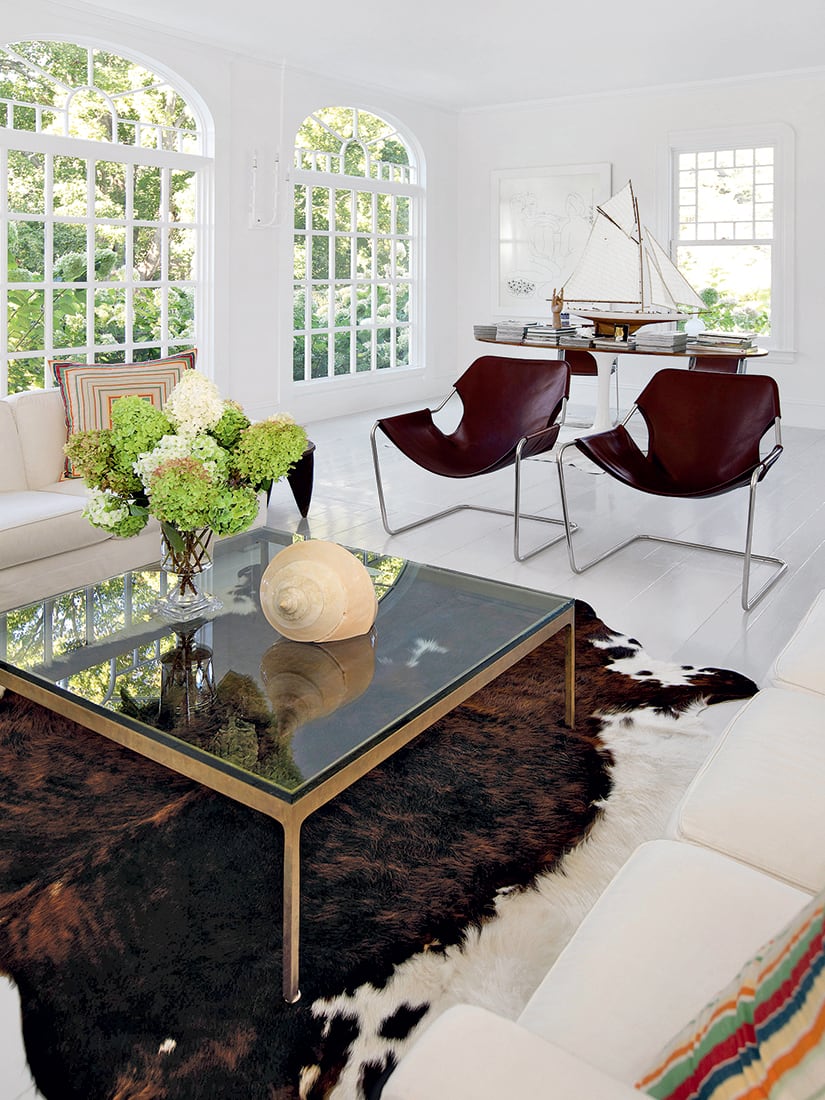 Low-key sling chairs lend a contemporary vibe to this classic clean-lined room. The model sailboat and large seashell on the coffee table reference the home’s coastal location, while the large windows adorn the space with a Victorian aesthetic. The glass-topped coffee table doesn’t distract from the view of the statement-making rug. 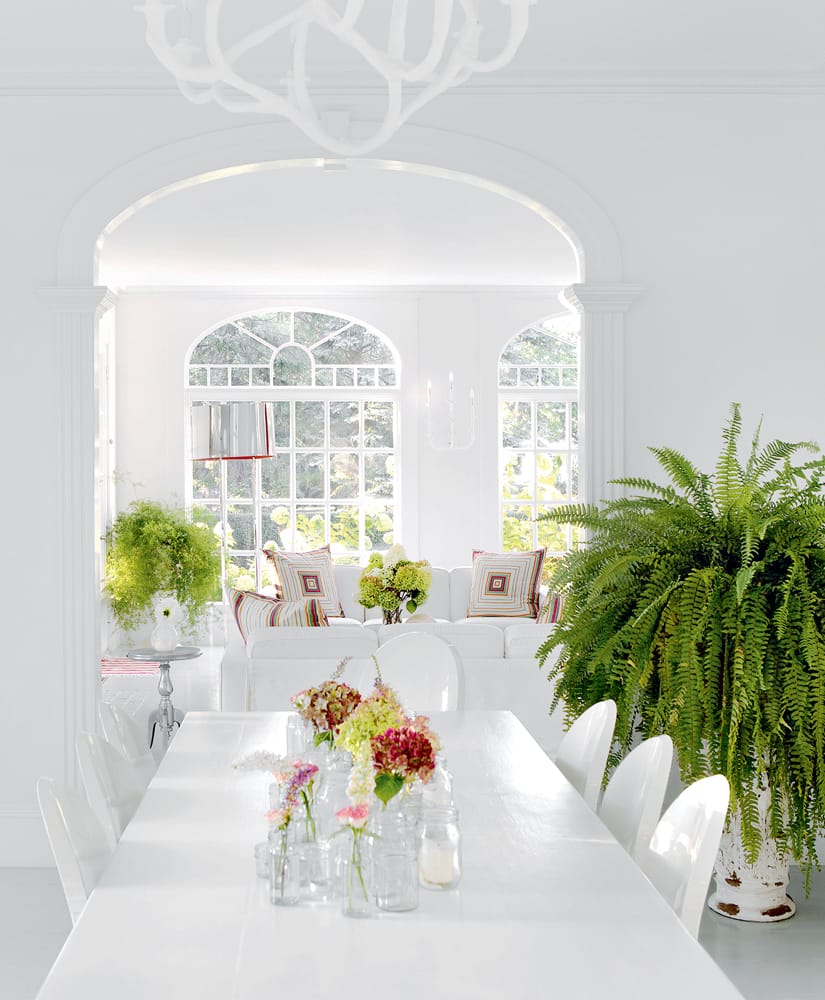 Floral arrangements and large potted plants are an ode to the house’s lush surroundings. Hydrangeas picked from the garden effortlessly bring the outdoors in. The long white dining table is a simple clean addition to the space, while an archway with heritage mouldings salutes the home’s beginnings and keeps the look from feeling too contemporary. 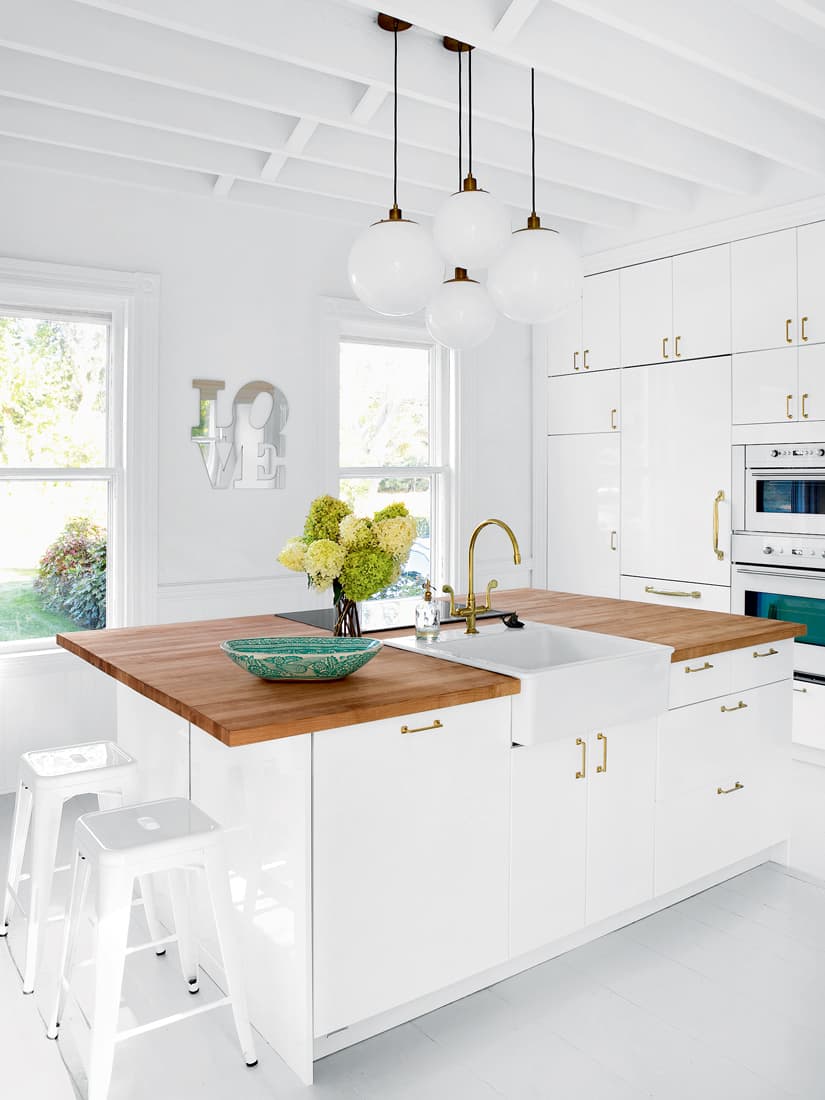 Grouped above the kitchen island, a quartet of opaque white globe pendant lights draws the eye up to the beamed ceiling to create visual interest. A wall of floor-to-ceiling high-gloss white cabinetry purchased from a big-box store is sleek yet understated, while the gold-toned hardware adds a touch of glamour and makes the cabinets pop. The butcher block countertop and enamelled apron-front sink on the island lend the kitchen a laid-back farmhouse air. The brass gooseneck faucet is a nod to the home’s traditional roots, and offers the room a hit of elegant warmth. 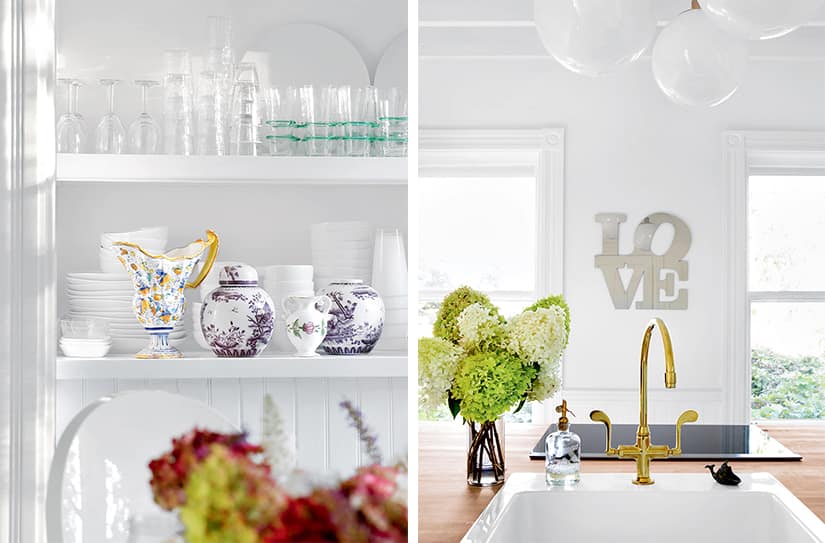 Vintage-look dishes displayed on open shelving are casual yet collected. 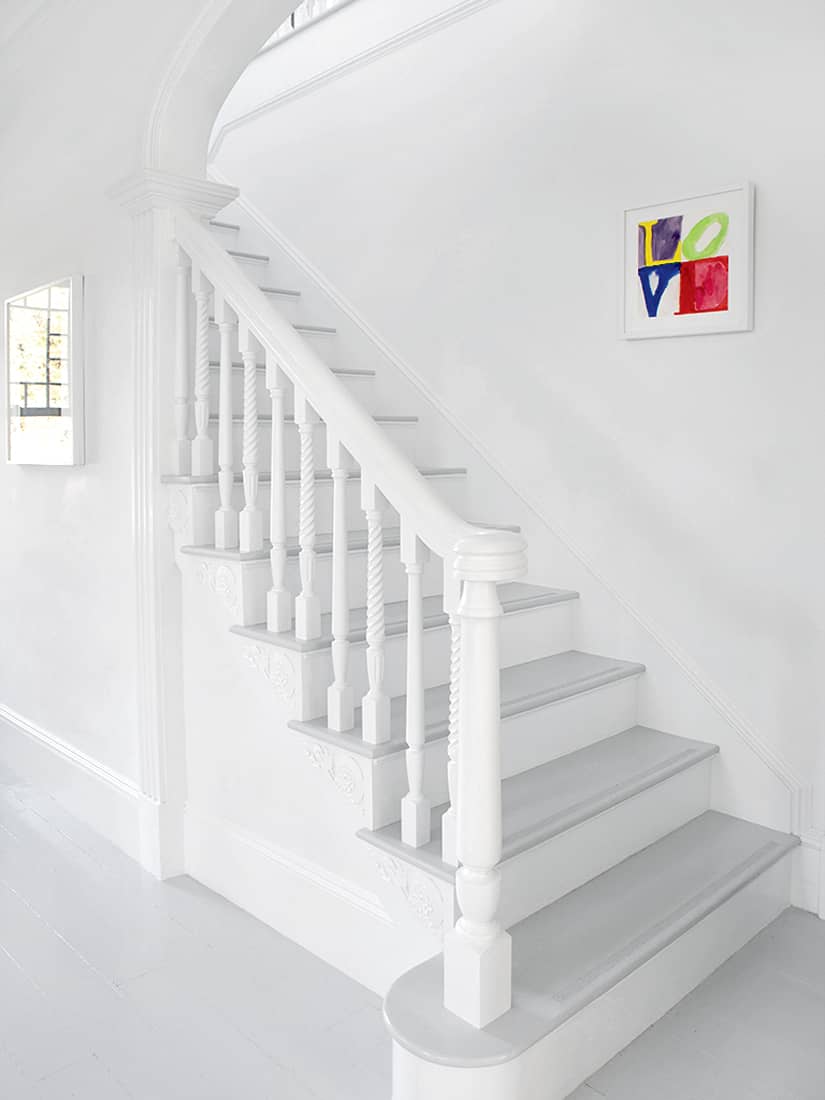 Grey-painted wide-plank floorboards throughout the space set a neutral backdrop for the mix of design elements. The soothing shade carries the sense of serenity to the upstairs sleeping quarters. 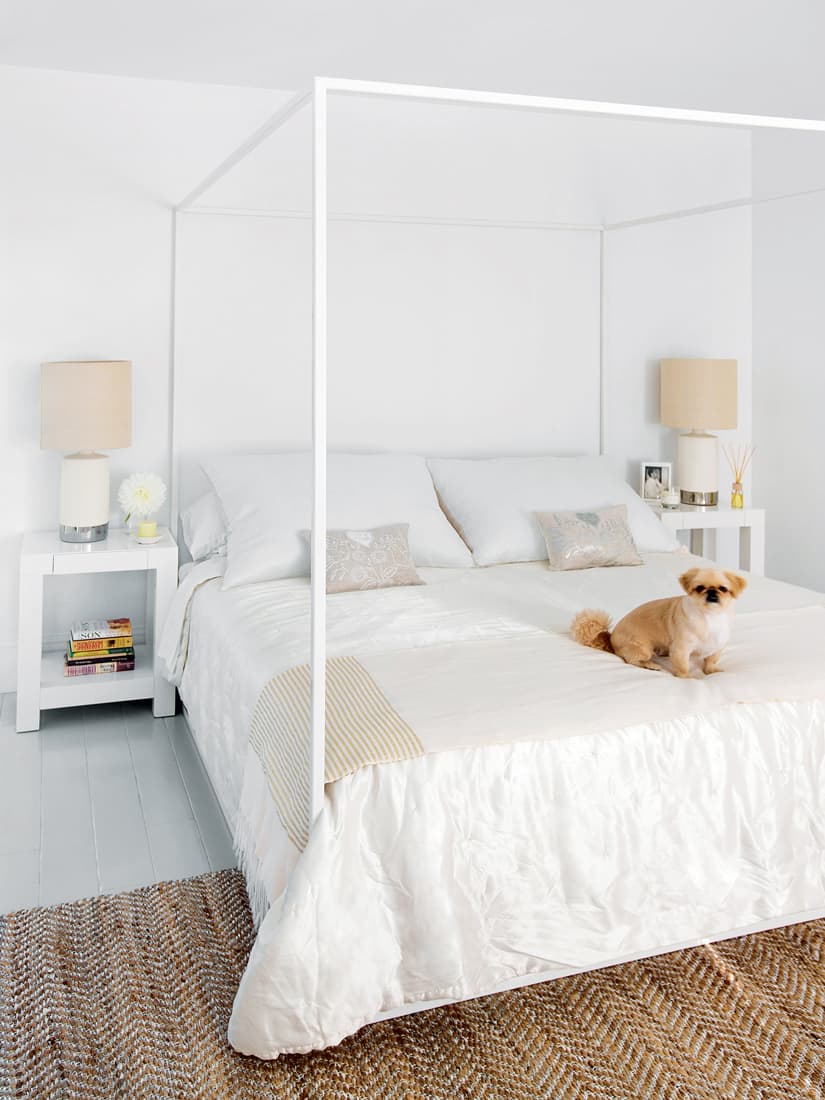 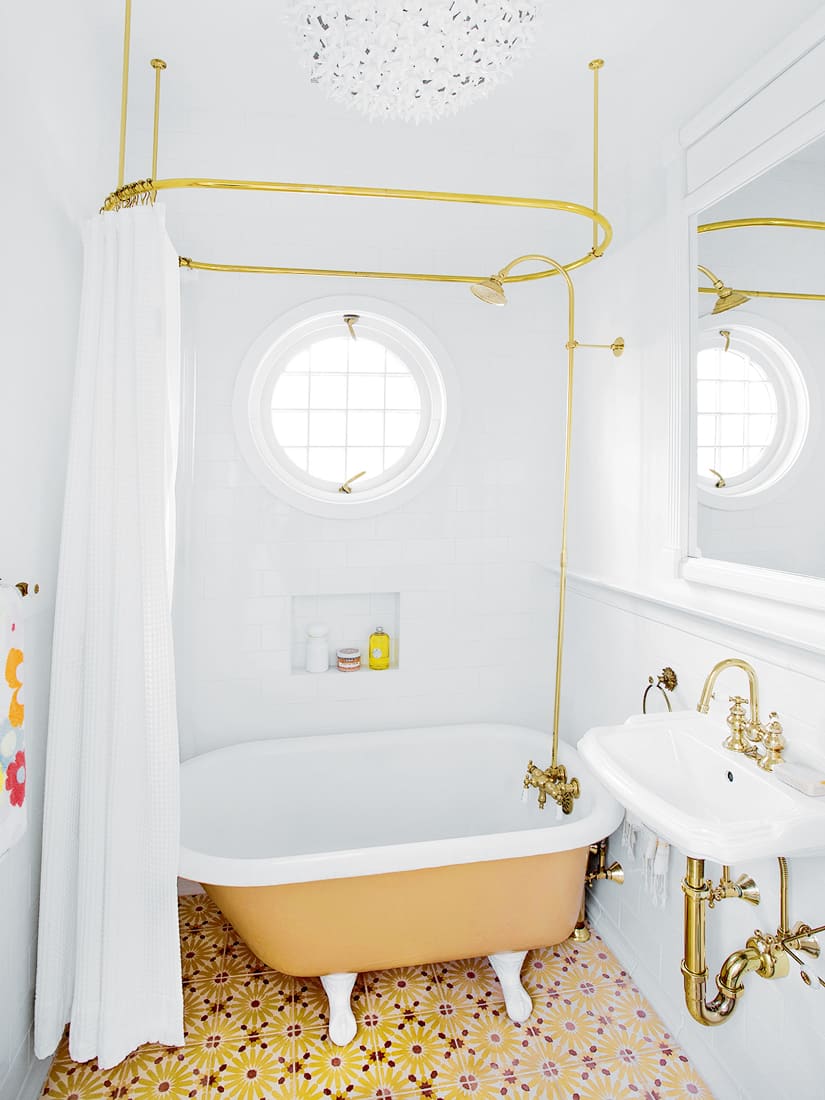 With a diminutive clawfoot tub that matches the patterned floor tiles, this bathroom cheerily honours its heritage setting, while the show-stopping flower-power chandelier brings the space into the 21st century. Bright fixtures and exposed plumbing are new-fashioned features that cozy up the room. We love the cheeky porthole.

A New York heritage home gets a contemporary update