Take a tour of this gorgeous family cottage on Lake Simcoe.

Designer Jessica Waks gives this family's second cottage its own unique flair, creating a spot to accommodate not only guests but also generations to come.

Nudged awake by the sweet smell of fresh cinnamon buns wafting from the kitchen, sleepy family members lumber downstairs, along the way catching sweeping views of serene Lake Simcoe – calm and quiet before the afternoon action takes hold. It’s a common Sunday scene at this Innisfil, Ont., cottage, which is peaceful in the morning until everyone gets up and silence gives way to animated chit-chat and laughter. Often, it’s not just the occupants of this abode in attendance, but the next-door neighbours as well – after all, they’re family, too. The homeowners, a Toronto couple with four adult daughters and two toddler grandchildren, weren’t planning on purchasing a new place – they bought a cottage only five years ago (featured in Style at Home’s July 2013 issue) – but when this 7,000-square-foot three-storey structure directly next door to the first became available, the owners decided to take advantage of the unique opportunity to keep their rapidly expanding family together on these adjacent vacation properties. To make the cottages look cohesive, they rehired designer Jessica Waks – Style at Home’s former design editor – of Jessica Claire Interiors, who had perfectly appointed their first place. “The homeowners wanted the spaces to have their own identities but to also look unified,” says Jessica, discussing how she took the nautical tone of the first property and layered a more country feel into the second. “I used a refined rustic aesthetic to temper its grand architecture, which boasts a spacious foyer and formal principal rooms,” she says.

Jessica was thinking Nantucket rather than classic Canadiana (“it’s more in keeping with the beach locale,” she says) when she rescued the dark and dated interior from its 1980s time warp. The most notable offences? Upholstered doors, inexplicable wall cut outs, tacky floral wallpaper (even on the ceiling in some rooms), mismatched flooring (including fruit-patterned tiles and pink-stained oak), heavily swathed valances, forest green toilets and sinks and a bizarre balcony that jutted into the living room from the second floor. In other words, the cottage called for a complete overhaul. So Jessica started fresh in almost every room, smoothing out the architectural oddities and replacing the flooring with dark-stained oak hardwood, which contrasts the newly white walls throughout – a timeless and cohesive envelope for the elegant nautical look. 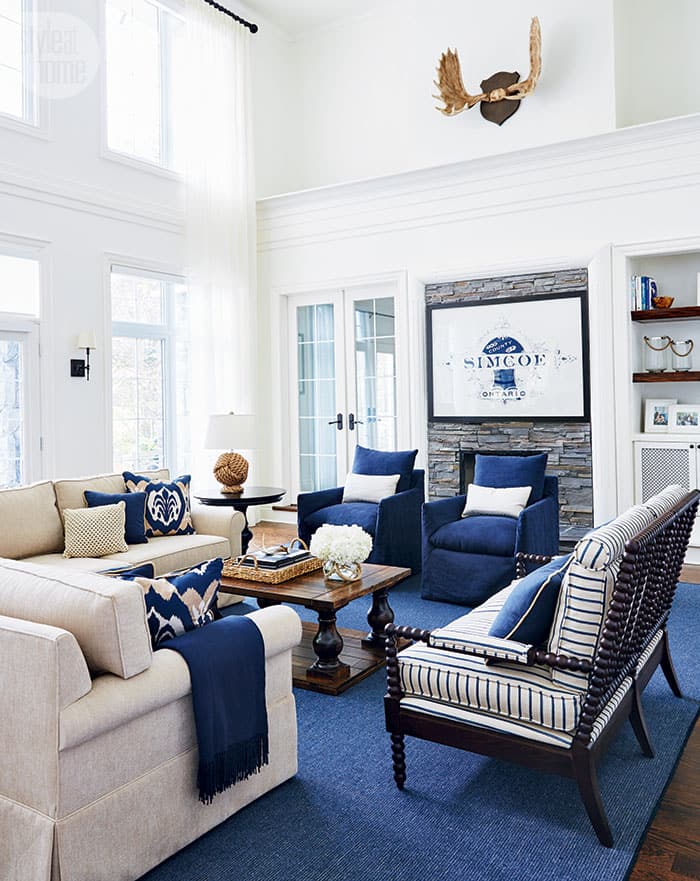 Creating a furniture plan for the grand living room was tricky because it has so many points of entry,” says designer Jessica Waks. “Not only did it need to seat a lot of people, but it also had to look good from all angles.” Jessica cleverly selected items like the blue swivel armchairs that can face the central sitting area, the fireplace or the view (win-win-win)! 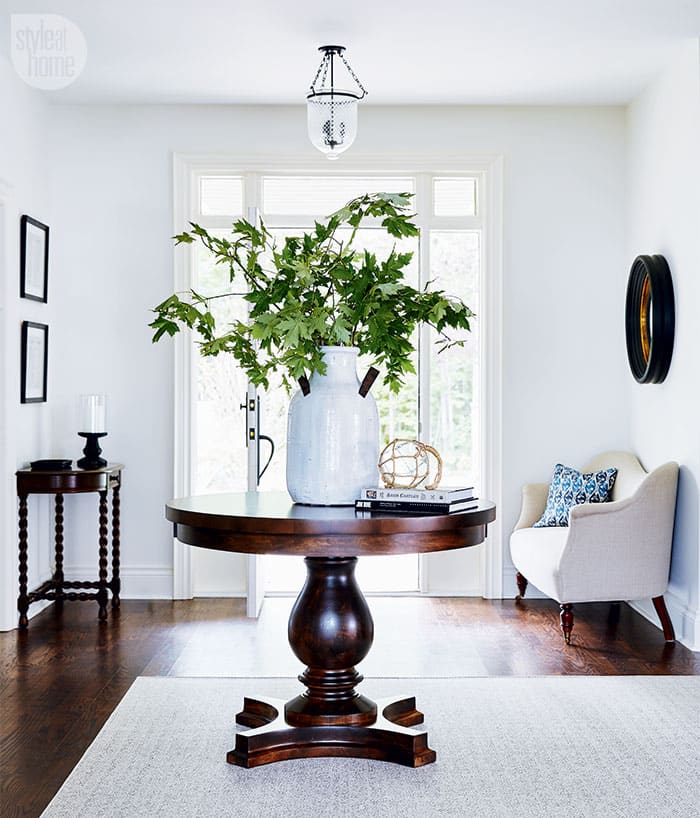 To make a statement in the foyer, Jessica set visually interesting pieces like the vintage spool-legged console with a curvy linen-upholstered settee against a simple, traditional pedestal table. The jug of maple branches is a nod to the cottage’s sylvan surroundings. 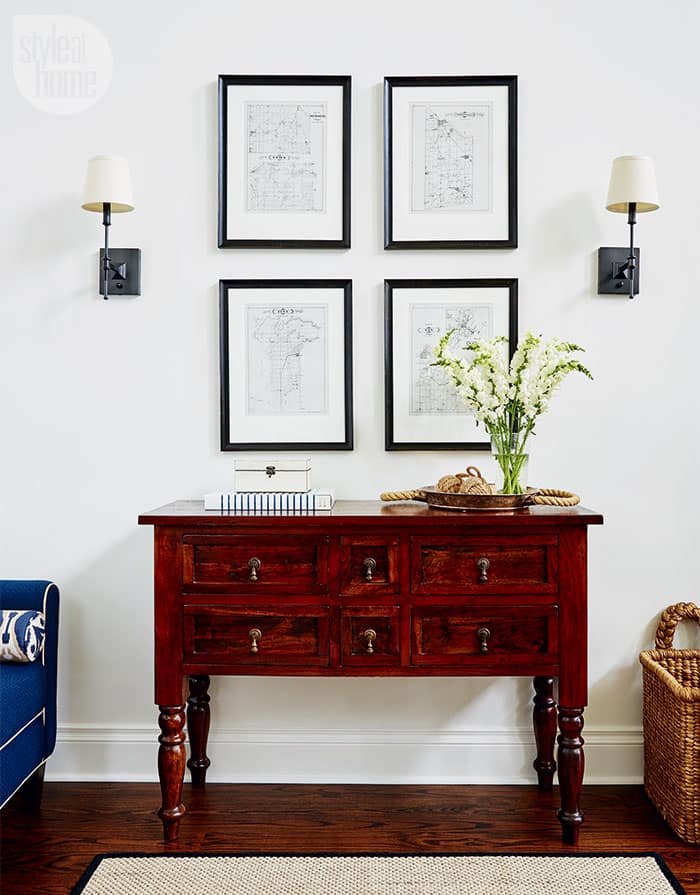 Above the console in the great room, the designer framed and hung a simple grid of anti­que Simcoe county maps. Believe it or not, the stun­ning console was a Craigs­ List purchase. “I love find­ ing preloved pieces online, at markets and at consign­ment stores – there are such gems to uncover,” says Jessica, who skilfully pairs these secondhand scores with new custom items. 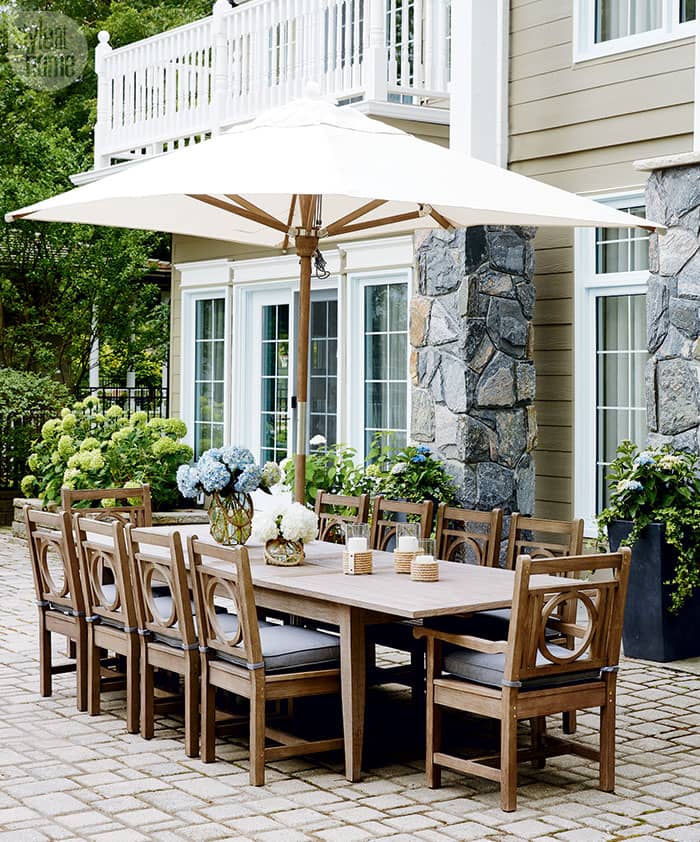 Meals are often ser­ved alfresco with stunning views of Lake Simcoe on the side. To visually connect the two properties, Jessica chose the same outdoor din­ing furniture for this space as she did for the other cot­tage next door. “I love how the teak’s grey stain and toss cushions match the stone­ work and siding of the home’s exterior,” she says. 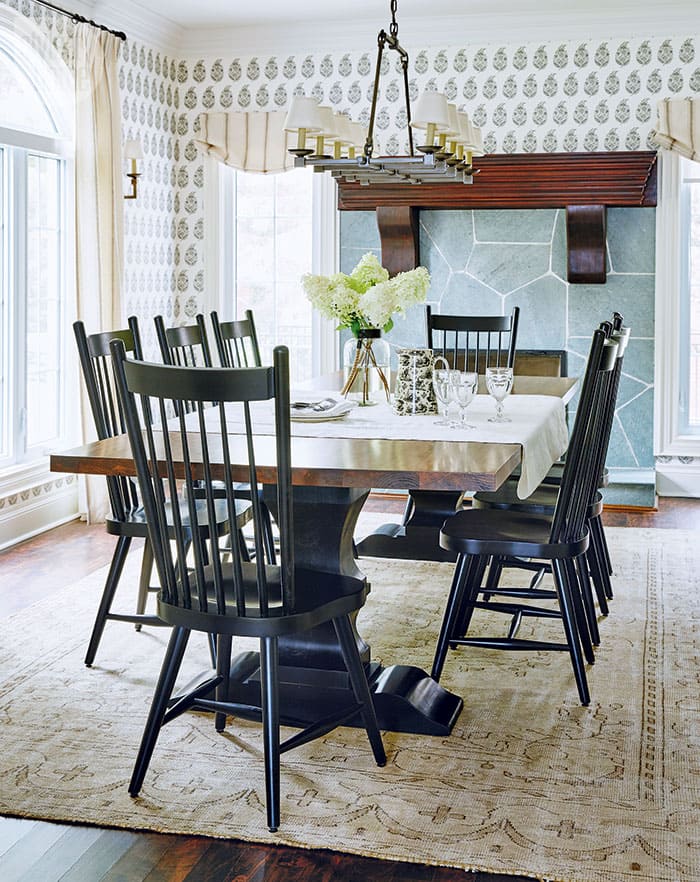 “The windows in the dining room look out to the front and side of the property,” says Jessica, “so to make up for the lack of lake views and to add visual interest, I chose a charming paisley wallpaper.” The blue-grey tone of the print perfectly matches the original slate fireplace surround. 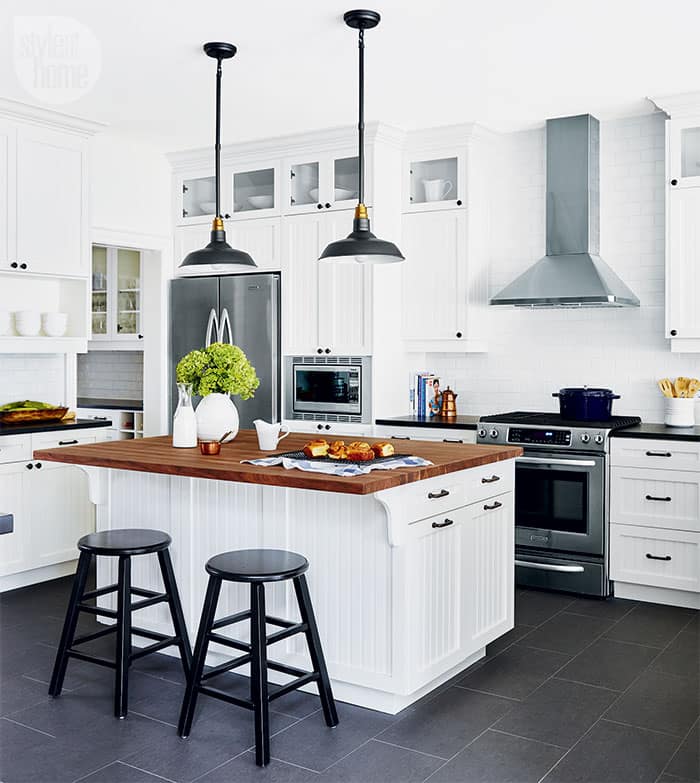 In the kitchen, the white beadboard cabinetry offers a light and airy country look that’s grounded by darker elements, such as the leathered black granite perimeter countertops and slate-look floor tiles. The wide butcher block-topped island provides ample space for the homeowners, who are avid cooks, to prep meals for their large family. 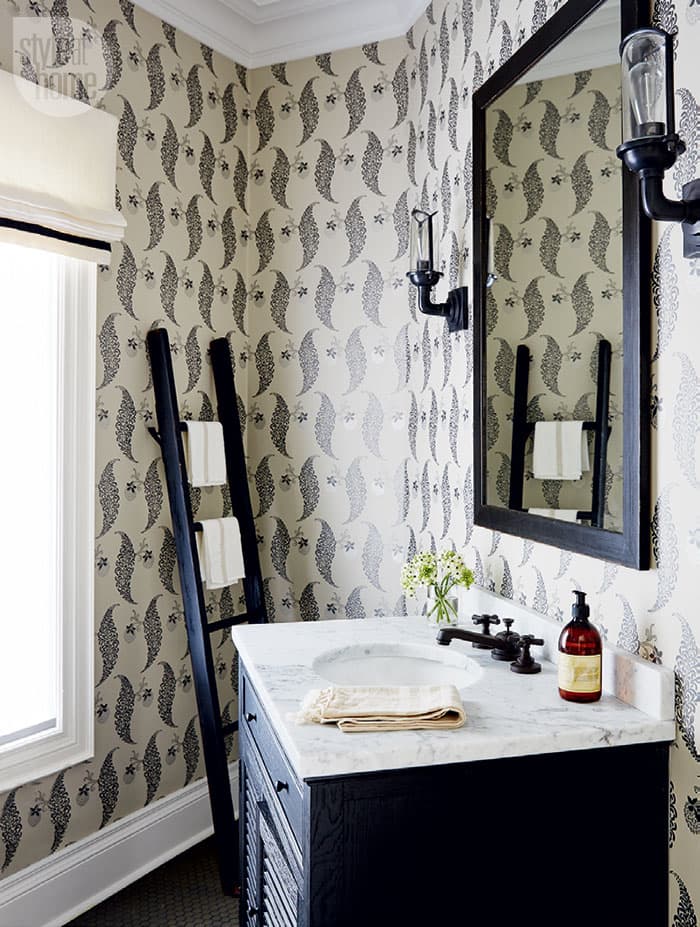 A pretty patterned wallpaper distracts from this powder room’s awkward angles. Using the space’s drawbacks to her advantage, Jessica leaned a vintage wooden ladder against the wall to hang towels for guests. 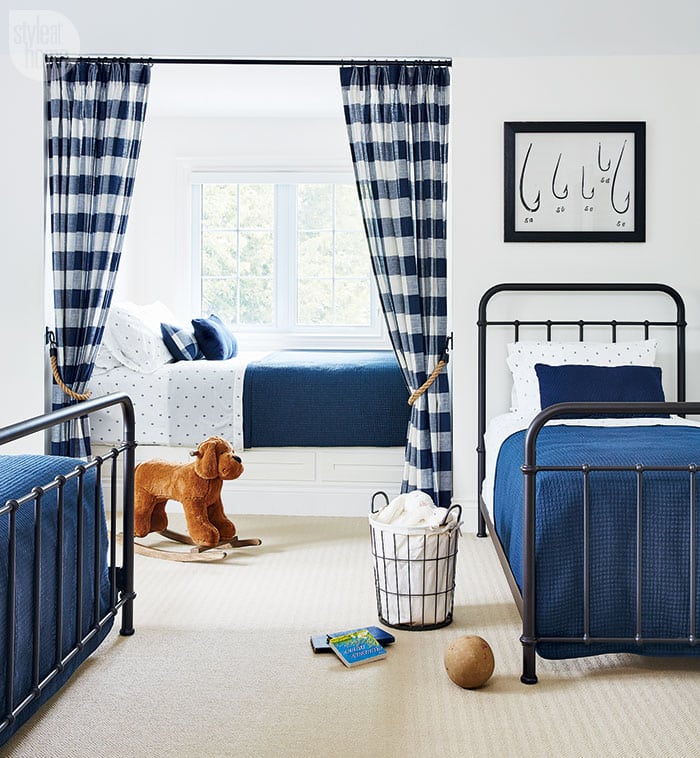 The third-floor “bunkie” boasts the most coveted sleeping area in the house: the queen bed in the window niche overlooking the lake. “You can see the sunrise from this spot,” says Jessica. Nautical buffalo-check drapery offers sleepers privacy from the rest of the room. 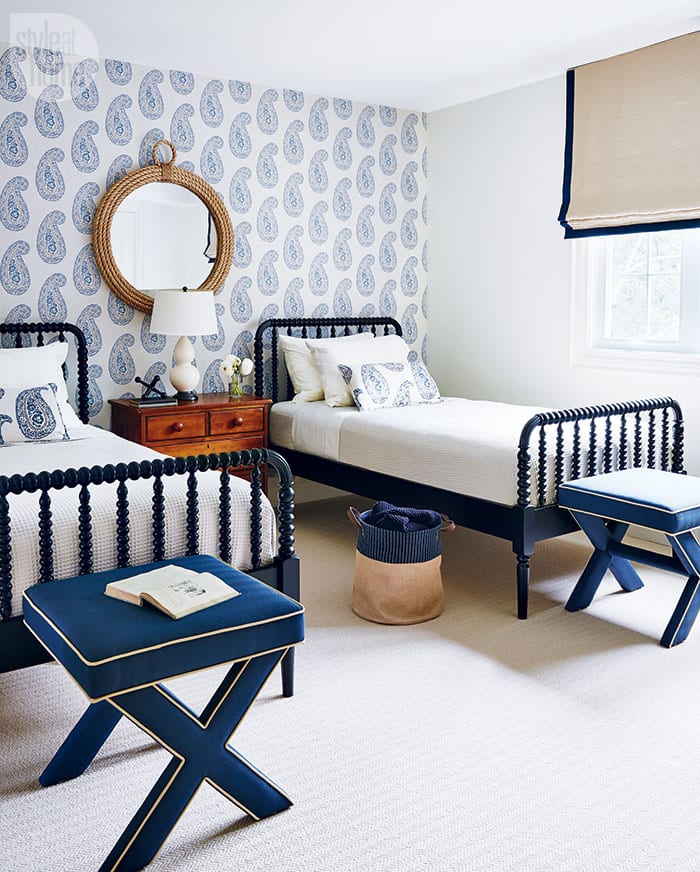 “As a decorator, I love the strong sense of symmetry that comes from a set of twin beds,” says Jessica, who had these hard-to-find spindle-framed beds for one of the rooms shipped from the US. “I like how they stand out against the wallpaper,” she says. “You can really appreciate the spool detail.”