Bright and white and warm and welcoming? This East Vancouver home is that and more thanks to classic materials, splashes of colour and fuss-free style.

A stroll through Vancouver’s newly revitalized Kensington-Cedar Cottage neighbourhood is an apt prelude to visiting one  of its coolest houses.

Like its vibrant buzzy surroundings, this new build home is contemporary, inviting and family-friendly – adjectives that please designer Joanna Vagelatos. “When I first saw the plans for this 2,700-square-foot house, I imagined a space that was welcoming yet streamlined,” she says. “Sort of modern and warm at the same time.”

The designer worked closely with the homeowners, a couple with two small children, to get the balance right. “One of the owners loves design and was fully involved in every aspect of the build,” says Joanna. “Her vision to keep the space bright and white became mine.”

The pair began by making minor tweaks to the first floor’s open plan. “In the living room, there were small upper windows on either side of the fireplace,” says the designer. “It may seem counterintuitive to remove windows, but doing so achieved a cleaner look and allowed us to maximize storage by building a floor-to-ceiling cabinet on one side that now hides the TV and its components.” The other side was fitted with a floating shelf and a built-in storage bench that keeps the kids’ toys and games out of sight.

In the kitchen, they added an island, which was built to both satisfy aesthetic desires and accommodate the wear and tear of little ones. “With kids in the house, an all-white island was a recipe for disaster – it would show every little kick and scuff mark,” says Joanna. Not wanting to sacrifice white, she came up with a savvy solution. “I created a recessed panel on the front of the island, where the children sit, and covered it with the white oak used for the floorboards but applied in a herringbone pattern. It worked out perfectly.”

Mindful of maintaining the sleek-meets-laid-back dynamic, Joanna chose Benjamin Moore’s Simply White for the walls, saying, “It’s super clean yet has a slightly warm undertone.” For contrast, the owners’ inherited art collection suggested the introduction of a cool colour. All of the works have blue tones, which subtly wound their way into every room. In the living area, it’s cornflower-hued toss cushions; in the master suite,  it’s a dreamy azure wallcovering.

Blue is even an undertone in the show-stopping marble-esque porcelain slab used in the kitchen backsplash and on the fireplace’s dramatic facade. “We planned on using real stone on the fireplace, but when we saw this look-alike, we fell in love,” says Joanna. Its veining and generous proportions create a spectacular effect that’s luxurious and livable, an equation the designer nails. “I’d describe this house as transitional modern. It’s got classic and contemporary features, but it’s still casual enough for a young family. Oh, and it’s pretty cool, too.” 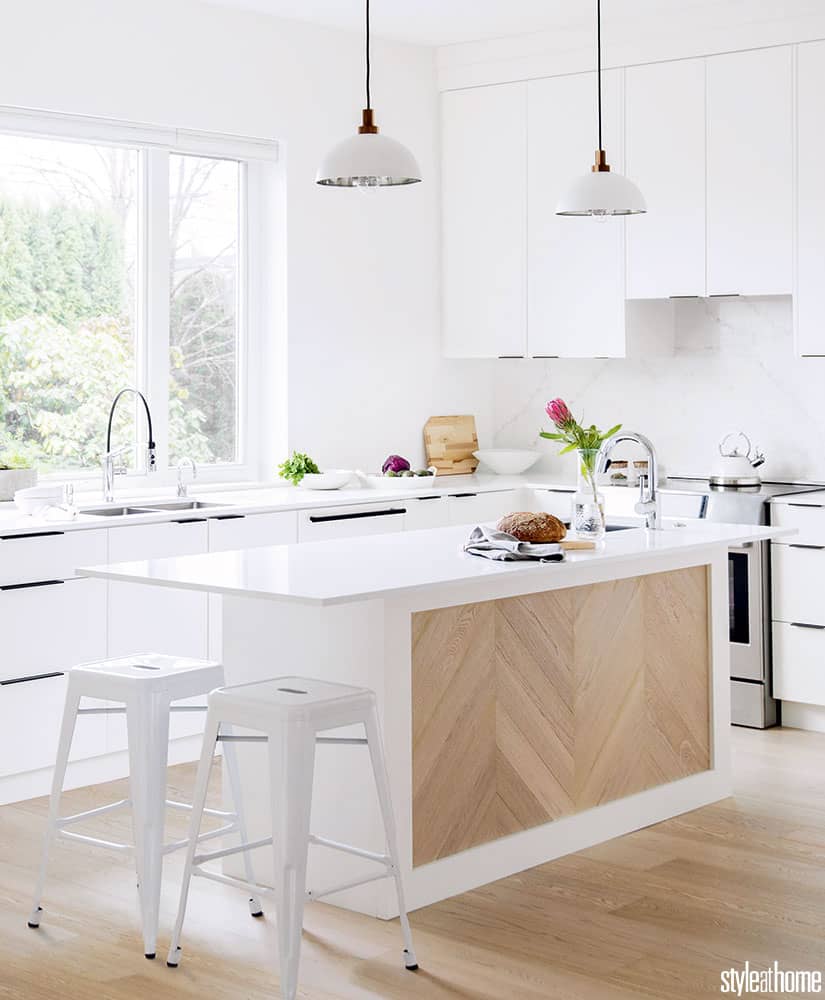 The private leafy backyard allowed Joanna to forgo window coverings in most rooms, including the kitchen. With the homeowners’ input, the designer planned out custom cabinetry with everyday living in mind. “The top drawers are shallow for storing cutlery, utensils and napkins, while the bottom ones are deeper to house pots and dishes,” she says. The white finish creates an expansive feel, while the hardware adds definition. “I chose black pulls and handles because they give the eye a focal point,” says Joanna. The stainless steel range also helps break up all the white. Picking up on the appliance’s silvery hue and referencing the living room’s fireplace for continuity, a marble-look porcelain slab backs the range wall. At the other end of the room, the framed piece by artist Toni Onley was the initial inspiration for introducing touches of blue throughout the house. 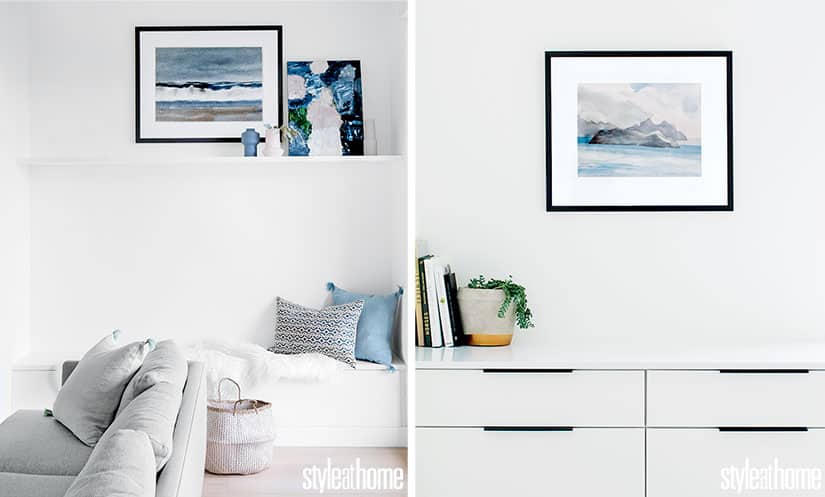 Passed-down artwork is casually leaned on the living room’s floating shelf. Below it is a storage bench designer Joanna Vagelatos had built in. Colourful and patterned toss cushions, a furry throw and a woven basket lend warmth and natural texture to the mostly white space. 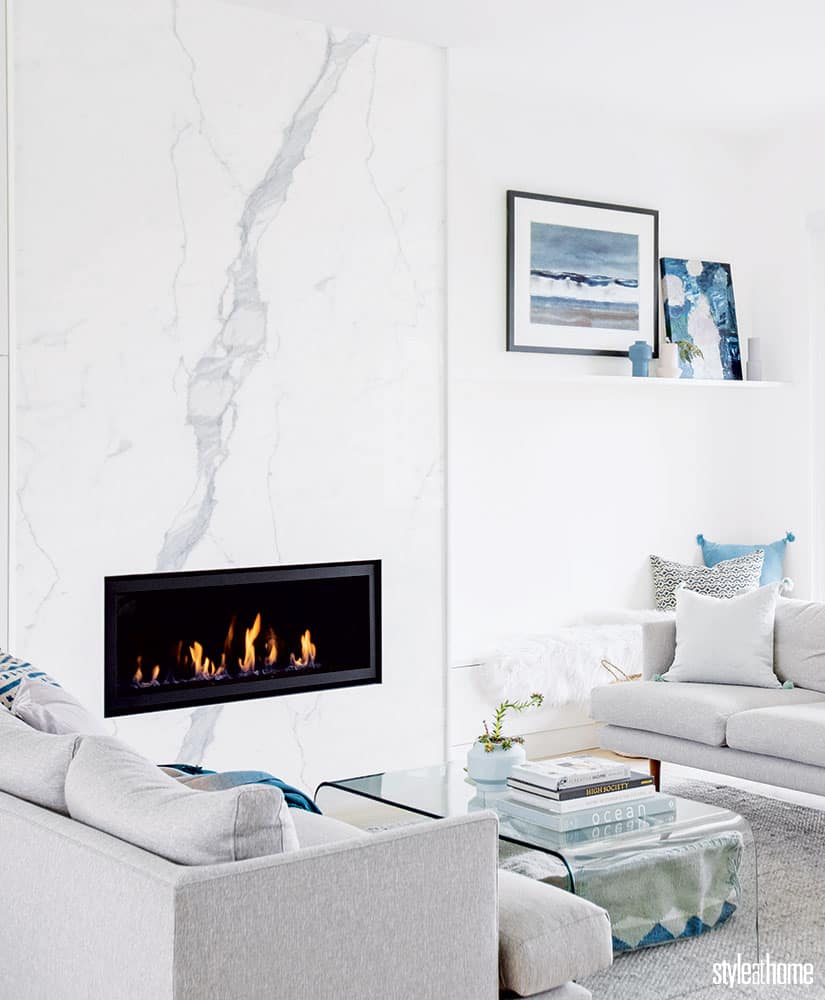 Joanna balanced the impactful veined porcelain slab on the fireplace with an open-legged side table and sofas for a light and airy feel. Artfully placing the owners’ clear coffee table over a soft pouffe layers in interest. 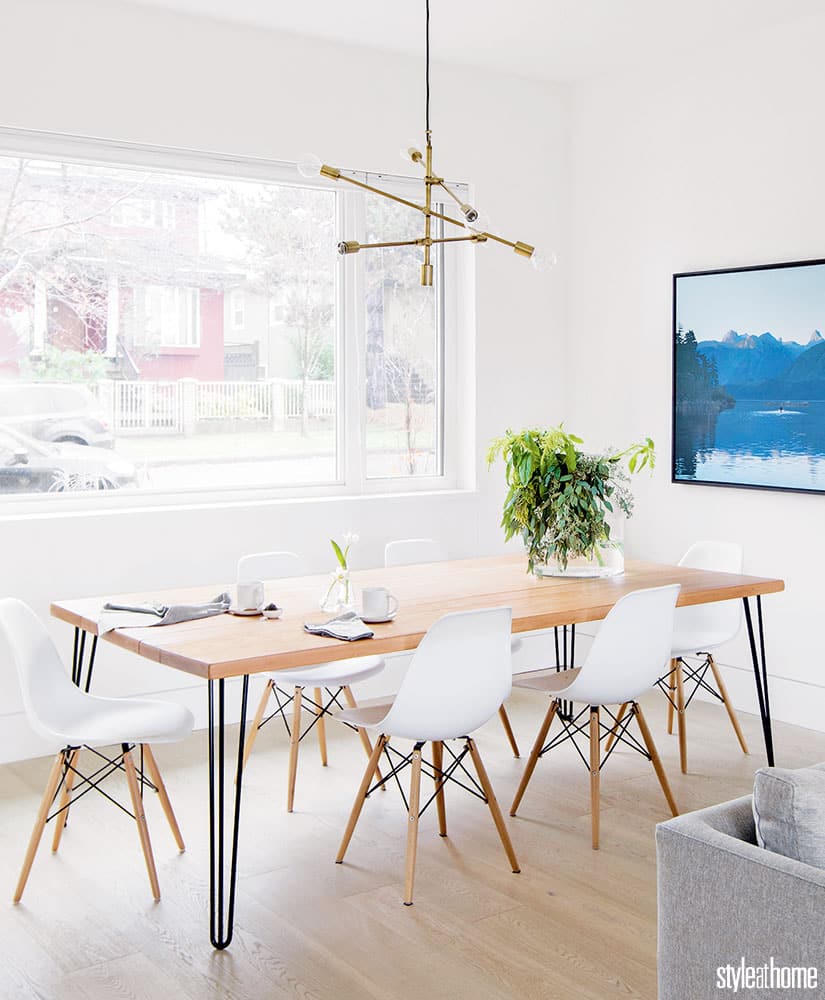 An inherited acrylic painting by West Coast artist Carol Haigh overlooks the dining area. Joanna updated the table, which the owners received as a wedding present, by refinishing the top and replacing its wooden legs with mod black steel ones. “This is the main eating area, so it had to feel casual,” she says. 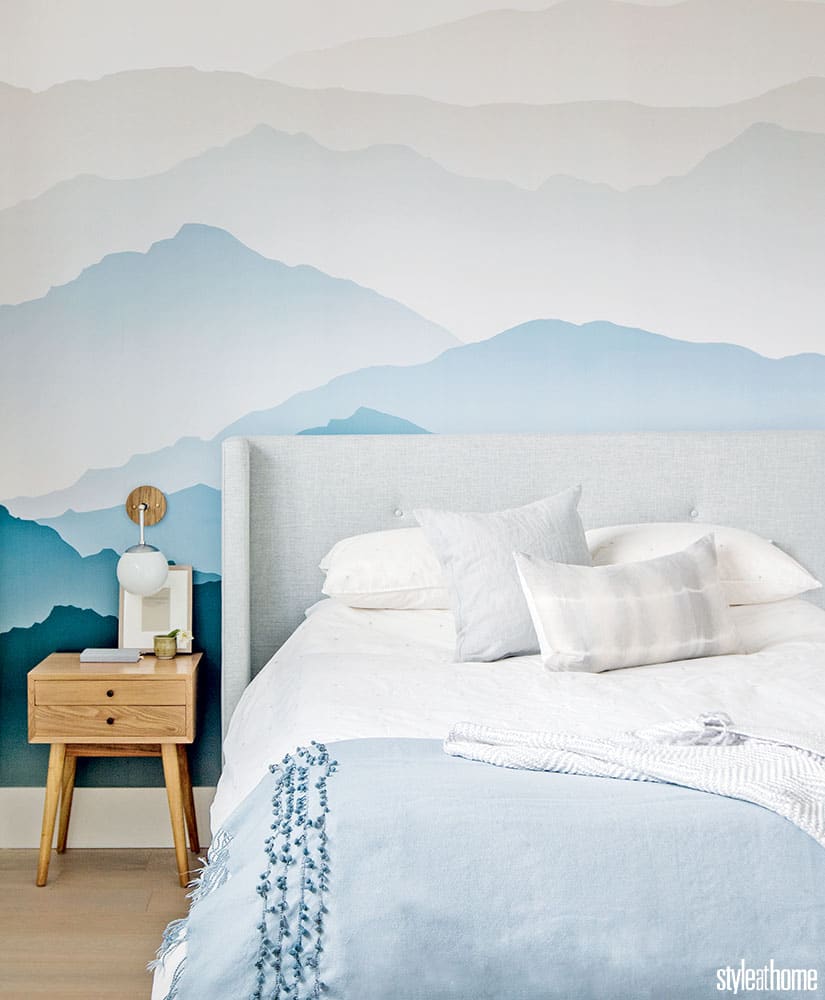 The master bedroom’s peaceful wall mural brings the blue accents upstairs. “The owners love skiing, so this paper was perfect. And there’s  a view of the mountains outside the  window, so it also references that.” Low-hung sconces and a low-profile headboard don’t compete with the scenic effect.

A Vancouver home decorated around the homeowner's art collection