Every week, TV personality Jillian Harris commutes from Kelowna, B.C., to Vancouver with her baby, Leo, and spends her days in this sweet getaway.

Anyone who travels nearly 800 kilometres every week deserves a comfy crash pad. And for TV personality Jillian Harris, former Bachelorette and current host of HGTV Canada's Love It or List It Vancouver, comfort means saying 'no' to hotels and apartment buildings. When she makes the weekly commute from her Kelowna, B.C., home to film in Vancouver, she wants somewhere that feels like a second home. “After a long trip, all I want is solitude and my own front door,” she explains. Three years ago, she found that front door in a lovely laneway in the city’s South Granville neighbourhood. It opened into a tiny yet perfect 1,000-square-foot two-storey gem. Not only was it in great condition, requiring nary a paint job, but it also had two bedrooms – one to share with fiancé Justin Pasutto when he comes along, and one for her truly enormous television wardrobe.

Then came Baby Leo (now 10 months old), and things had to be rethought. “So much for the wardrobe room! I dumped my clothes, shoes and handbags in the garage,” says Jillian. “If that isn’t love, what is?!”

But that was just the beginning. “All of a sudden, every single thing in the house looked utterly useless or alarmingly dangerous,” she says. So, together with a designer on the show, Ally Spino, she devised a new plan: Out went the living room end tables (no storage), the demilune table (way too tipsy) and the glass coffee table (“smashable, with sharp corners – are we kidding?”). The time had come for end tables with drawers to store items that shouldn’t be lying around, a dresser that could be jam-packed with diapers and toys, and a plush storage-savvy ottoman. “Which Leo sucks on most of the time,” says Jillian with a laugh. “But I guess that’s the lesser of two evils!” Another thing that changed was the home’s palette. “I’m known for using very little colour, but somehow having a baby made me want to try it here,” says the designer, who used hits of pink throughout the house. “Justin said he didn’t want pink,” she says. “So I call it ‘magenta.’” Big splashes of pigment also appear in Leo’s nursery, a sunny yellow and white room with broad-striped drapes. “I wanted it to be cheerful, but not too juvenile,” she explains. “So I used lots of white and then added the sunshine tones.” 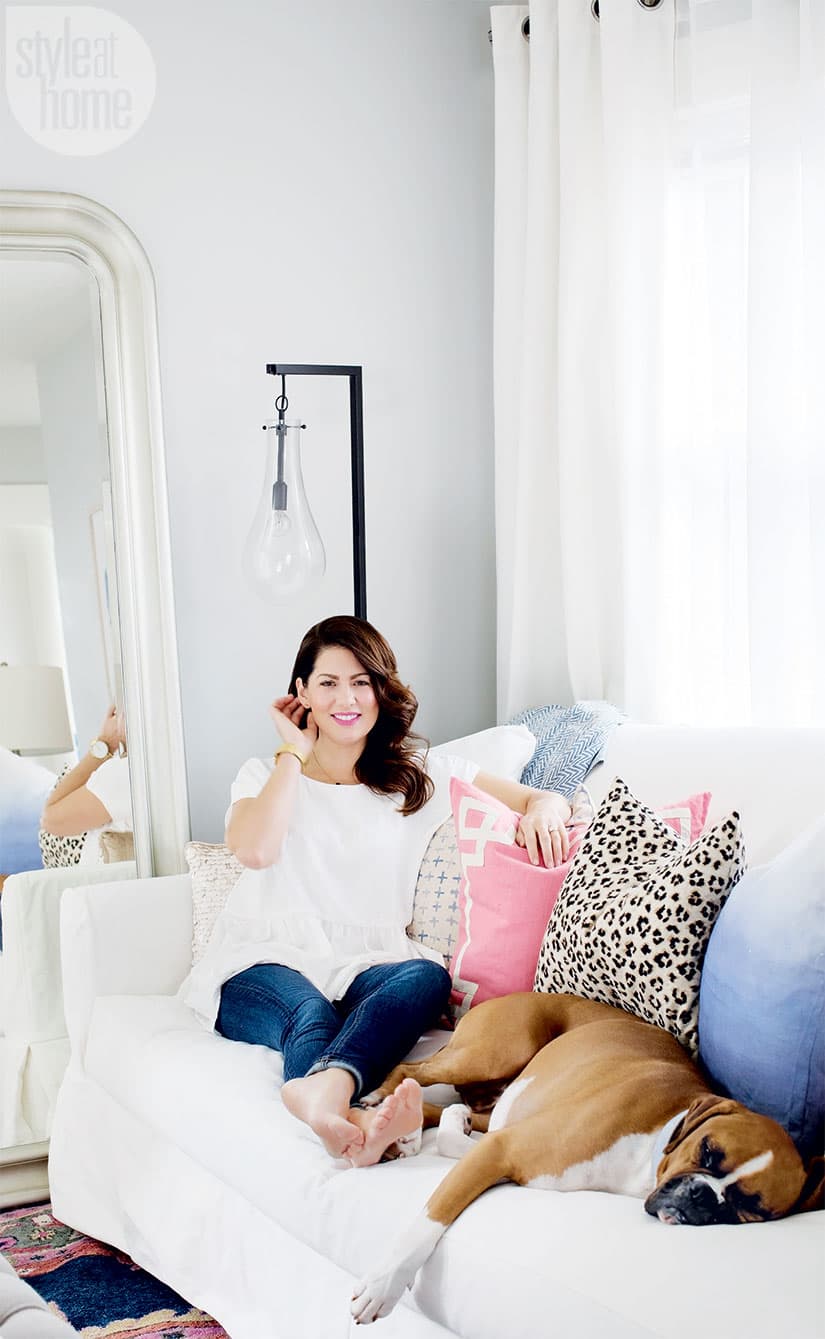 Looking back, Jillian says she’s still amazed it all came together. “Pregnancy and designing a home did not mix well for me,” she says. “I was so stressed out! The baby became this deadline in my head. Every day, my brain was saying, ‘The baby! The baby!’ And the more I rushed, the less things seemed to work out. I hated the drapery I initially ordered. Shipments were late. And I was constantly buying things and returning them. In the end, it took me nearly a year to get things right, and I was working on it even after Leo arrived.”

But even under normal circumstances, designing on a deadline isn’t how Jillian works. “Honestly, I don’t think the pressure of a time limit is ever good for a decorating project,” she says, quashing the idea that a room can be whipped up and made perfect in a short period.

So what’s her advice to anyone who wants to make over a space? Never try to redecorate a room full of stuff. “Take your furniture out to the garage, and spread all your accessories on tables out there, where you can see them,” she says. “Then, walk back inside and decide on the wall colour. After you’ve painted, bring in one piece of furniture at a time. Then, layer in toss cushions and drapery. But don’t rush. One day, you’ll walk into the room and spontaneously let out a big sigh. That’s how you’ll know you’re done.” At least until another life-changing event happens. 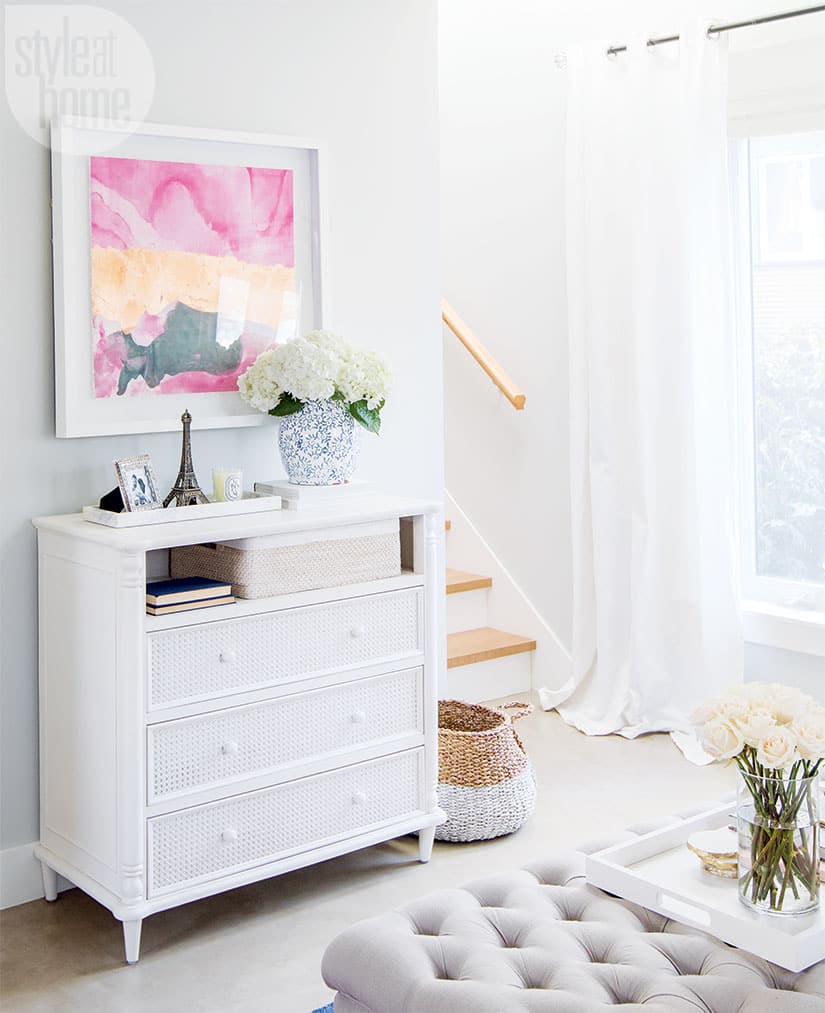 Pretty as a picture, this dresser takes pride of place in the living room. Yet its real purpose is to provide ample storage and keep baby-changing supplies within reach. “I don’t like clutter. I’m one of those ‘a place for everything and everything in its place’ people,” says homeowner Jillian Harris, who also tucks toys in stylish baskets on the floor. Oversized art and simple accessories keep the room looking fresh and airy – not babycentric. 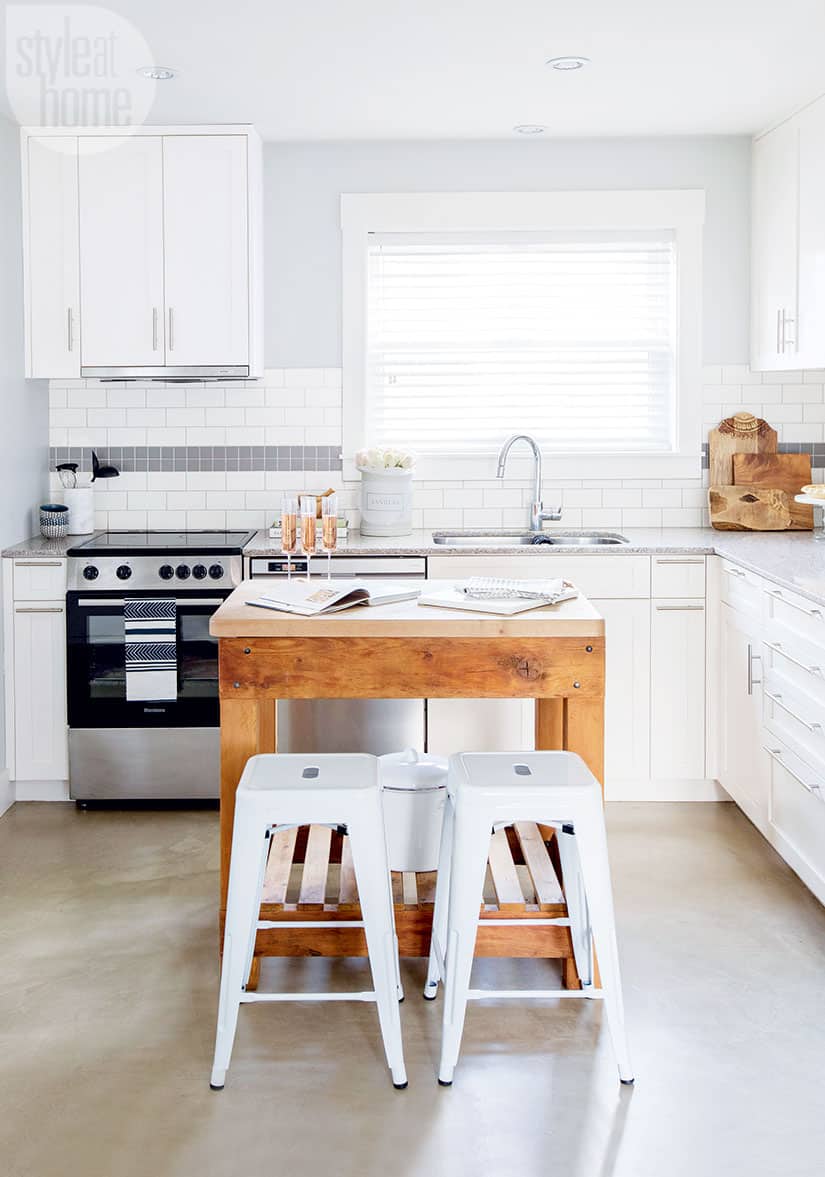 Having an open layout in which the kitchen faces the living room is handy, but it lacks space for a dining table. So when Jillian spied this butcher block at an antiques shop, she bought it right away. It serves as the perfect island where she can eat a quick meal and go on with her busy weekday mornings.

The kid-friendly living room has washable canvas drapes and a white slip-covered sofa – any spills can be easily cleaned. The large leaned mirror is a signature Jillian design move, and it visually expands the small space. 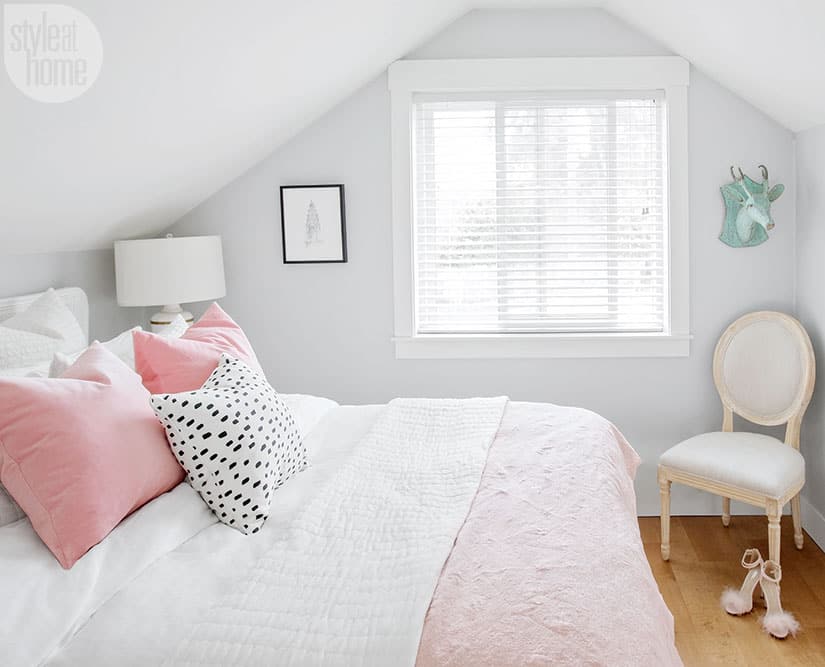 Upstairs, Jillian created a serene getaway, something she needs given her crazy schedule and weekly long-distance commute. Jillian calls her master bedroom “a pretty place to crawl into bed,” but she laughs about all the toss cushions. “Every day I admire them, and every night I get annoyed that they’re in my way.” 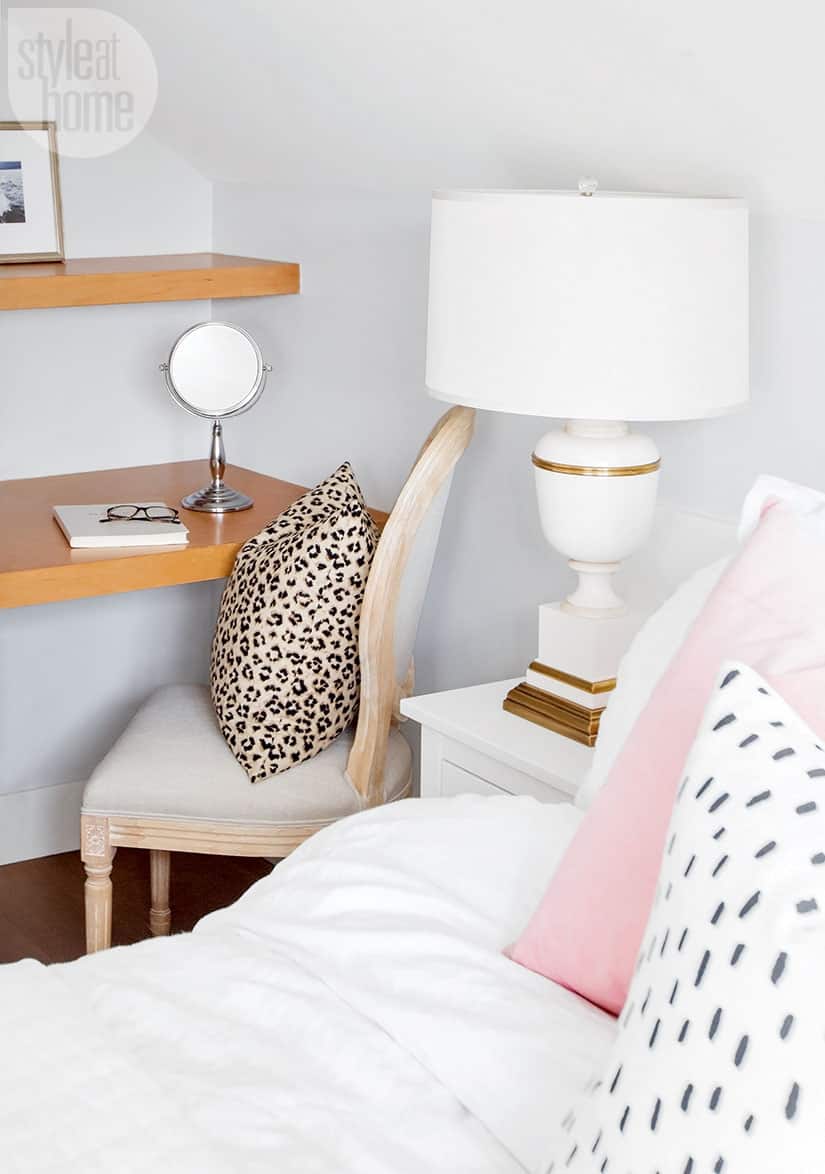 A sloped ceiling can often result in wasted space. Here, though, it serves as a display area that doubles as a vanity and workstation – as well as a place for Jillian to store the toss cushions when she’s sleeping. During the week, her fiancé, Justin Pasutto, and their home in Kelowna, B.C., can feel far away. So a sunny upstairs room where mommy and baby can cuddle is just the ticket. The plush bedding is super inviting, and the white, grey and powder pink palette is soft and soothing. 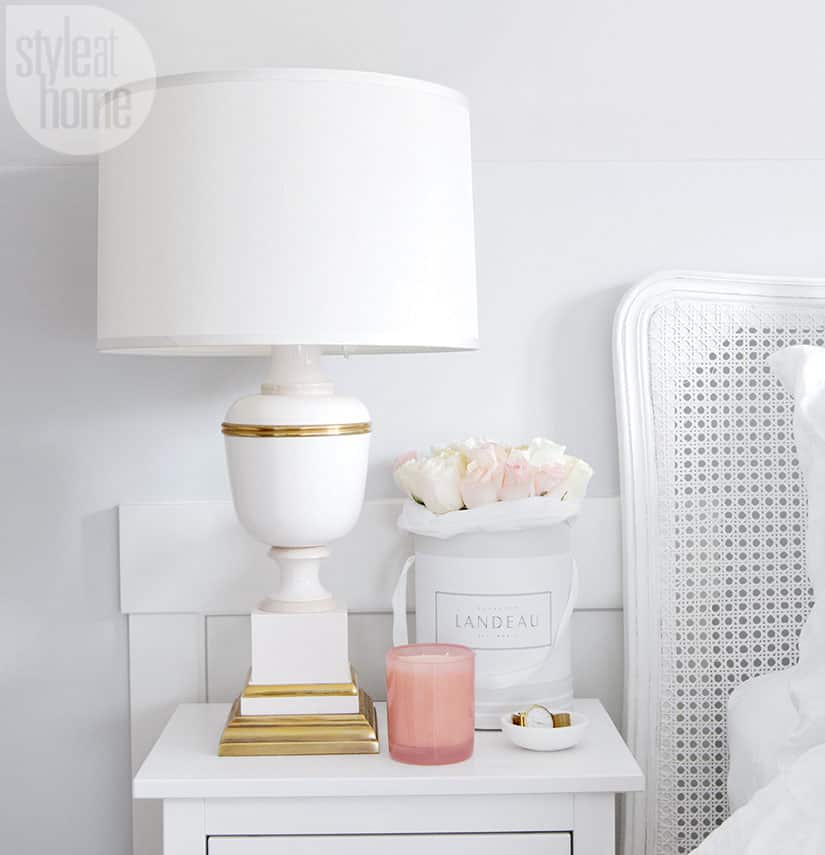 “I don’t believe that owning more stuff is the way to a beautiful home,” says Jillian, who curates her belongings at least three times a year. In her master bedroom, the basics – a country-style rattan headboard, sculptural table lamps and a few simple accessories – keep the room fresh and sparse yet interesting thanks to the mix of styles. 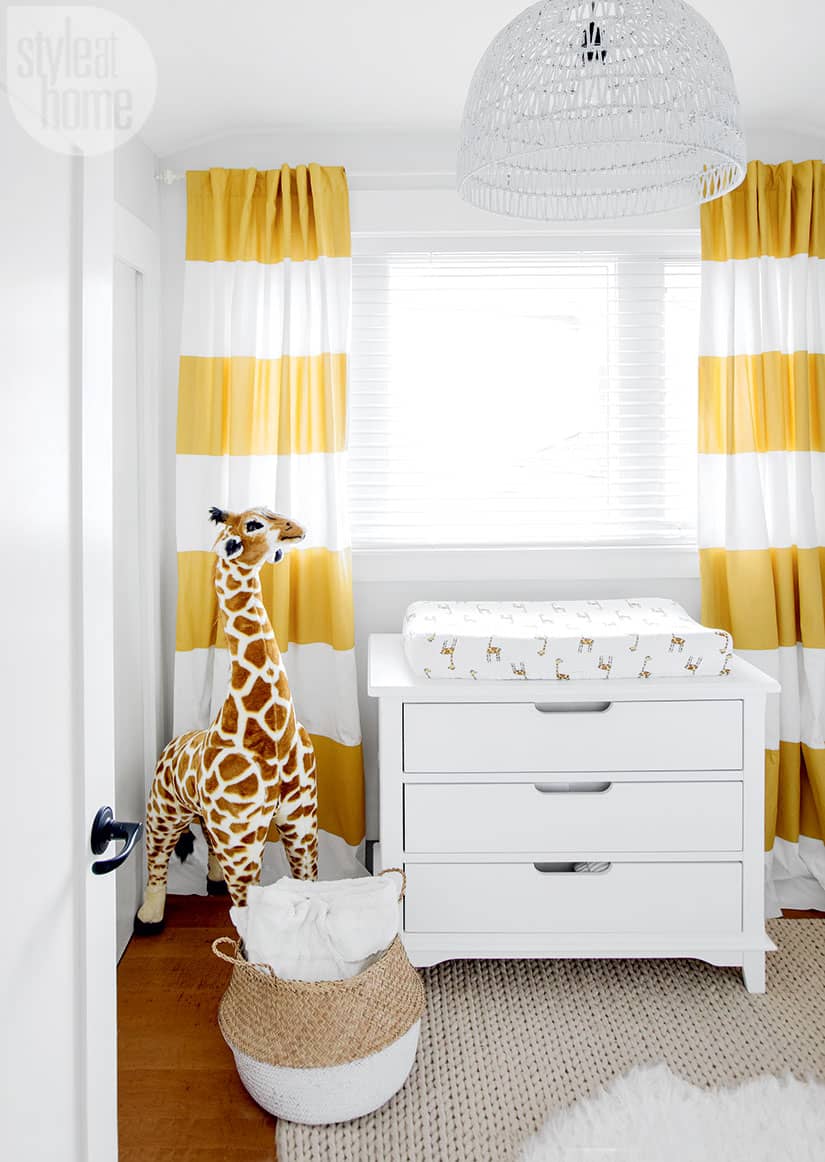 Jillian’s former walk-in closet is now a nursery for baby Leo that glows with sunny yellow stripes. The jungle-themed room is like a toy zoo with its whimsical tiger head, oversized giraffe, stuffed panda and other toy animals and prints. 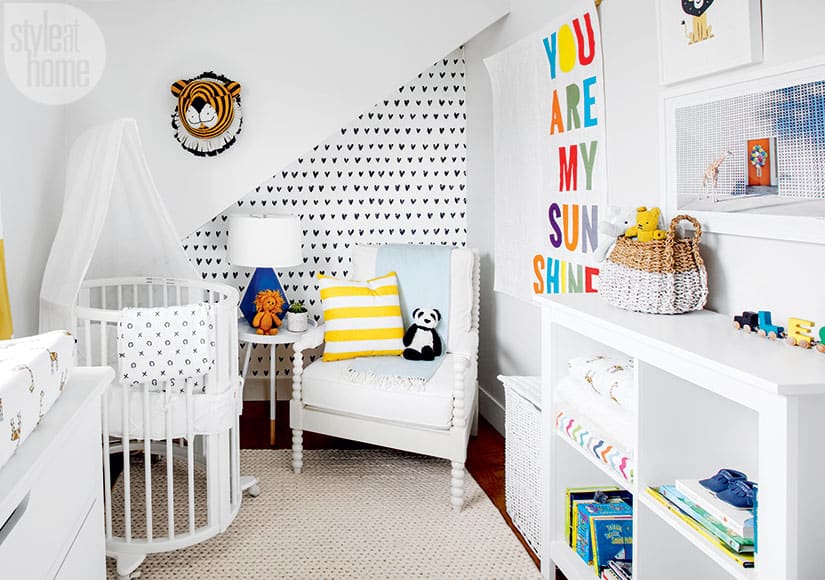 Accessories like the faux sheep-skin throw and crocheted rug make the nursery cozy while the modern and interesting crib and pendant light add designer interest.