A Vancouver new-build house with Cape Cod inspiration has family living at its heart and soul.

“I was eight months pregnant and watching way too much House Hunters. It was the Cape Cod-style houses that stood out to me.” That’s how one of the homeowners recalls the inspiration for the design of this Vancouver new build she and her husband commissioned in 2015. “At that time, we had a two-year-old daughter, another baby girl on the way and two Labrador retrievers – we’d clearly out-grown our apartment!”

Her in-laws had a solution: take over the house her husband grew up in. “His parents had just built themselves a new house next door to the old family home,” she says. The prospect of having the girls’ grandparents nearby thrilled the couple. The original house, however, did not. “It wasn’t an easy decision, but since we wanted this to be our forever home, we all agreed it was best to start fresh.” With that, the dated structure was replaced with a bigger and brighter 2,800-square-foot abode that needed furnishing, Cape Cod style.

They called in designer Ami McKay of Pure Design to achieve that breezy East Coast look with lots of white, grey and black throughout. “The couple had seen my work online, and we connected right away,” says Ami. “I knew this space had to be functional for the kids, the dogs and for the family’s open-door-policy entertaining style, but it also had to be warm and inviting.”

Before embarking on decorating, Ami implemented a few structural alterations, such as enlarging the windows to take advantage of the light of the plum corner-lot location, expanding the kitchen island to comfortably seat four and adding a glass wall in the breakfast nook.

The designer chose white for the walls to capitalize on the main floor’s open plan, which she unified with common elements – heated porcelain floor tiles that look like beachy white-washed wood, custom cabinetry in the entryway and kitchen and judiciously placed black accents. “These speak to the look the homeowners were after,” says Ami. “The space is light and bright with high contrast.” That contrast is evident in Ami’s furniture selections as well. “There are luxurious statement pieces, such as the dining table, but we didn’t compromise on durability,” she says, citing the leather furniture in the living room. “These pieces are tough enough for the kids and dogs but still beautiful to look at.”

The homeowners love the result for both its coastal vibe and the unexpected tradition it has established. “My husband grew up in this spot, and we hope to pass this house down to our girls one day – they’ll have to fight over who gets to live in it, but we’ll worry about that when the time comes!” 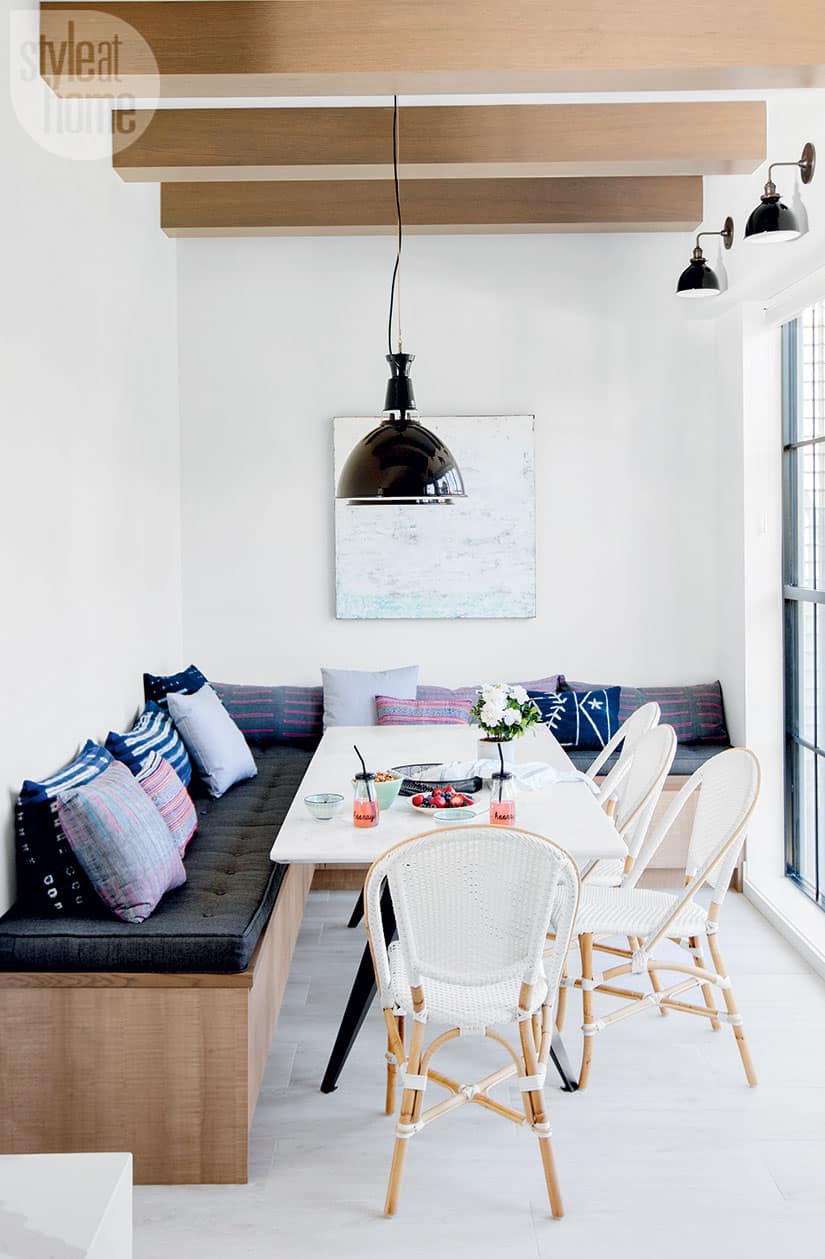 This light-filled eat-in area is a family favourite. “We spend a lot of time here with the kids,” says one of the homeowners. Designer Ami McKay describes the custom banquette as a design trifecta. “It’s space-saving, offers storage and creates an intimate feeling,” she says. 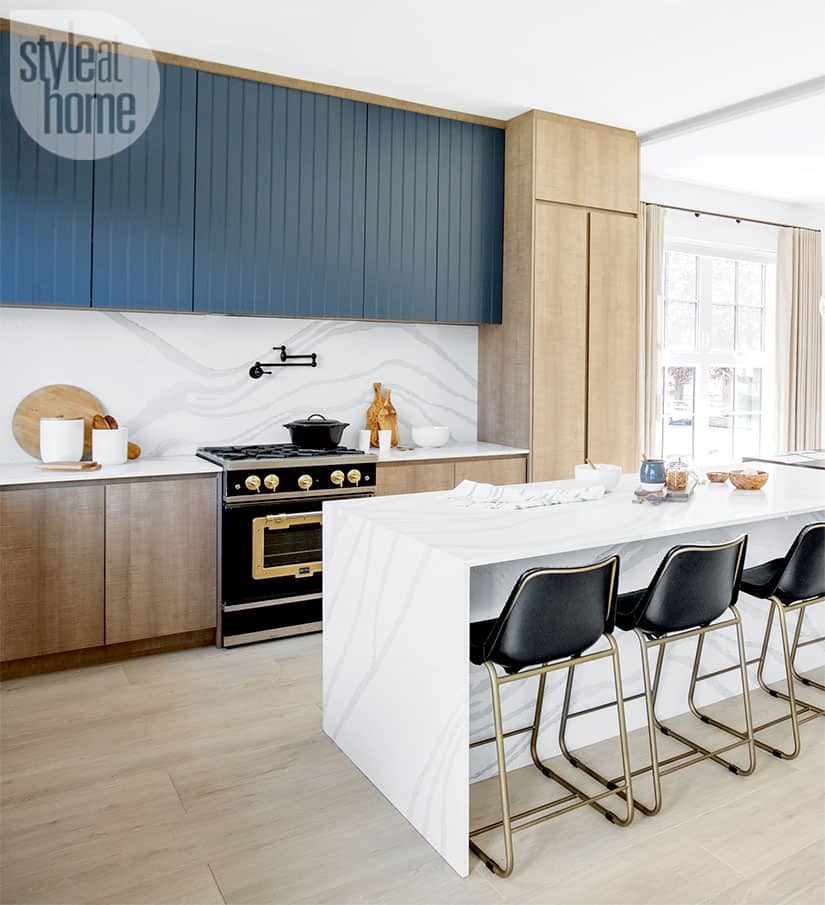 Ami augmented the eat-in area’s generous built-in banquette with bistro-style chairs and glossy black light fixtures. “These lights tie in with the kitchen cabinetry hardware and range. Black is a grounding colour throughout the home,” she says. 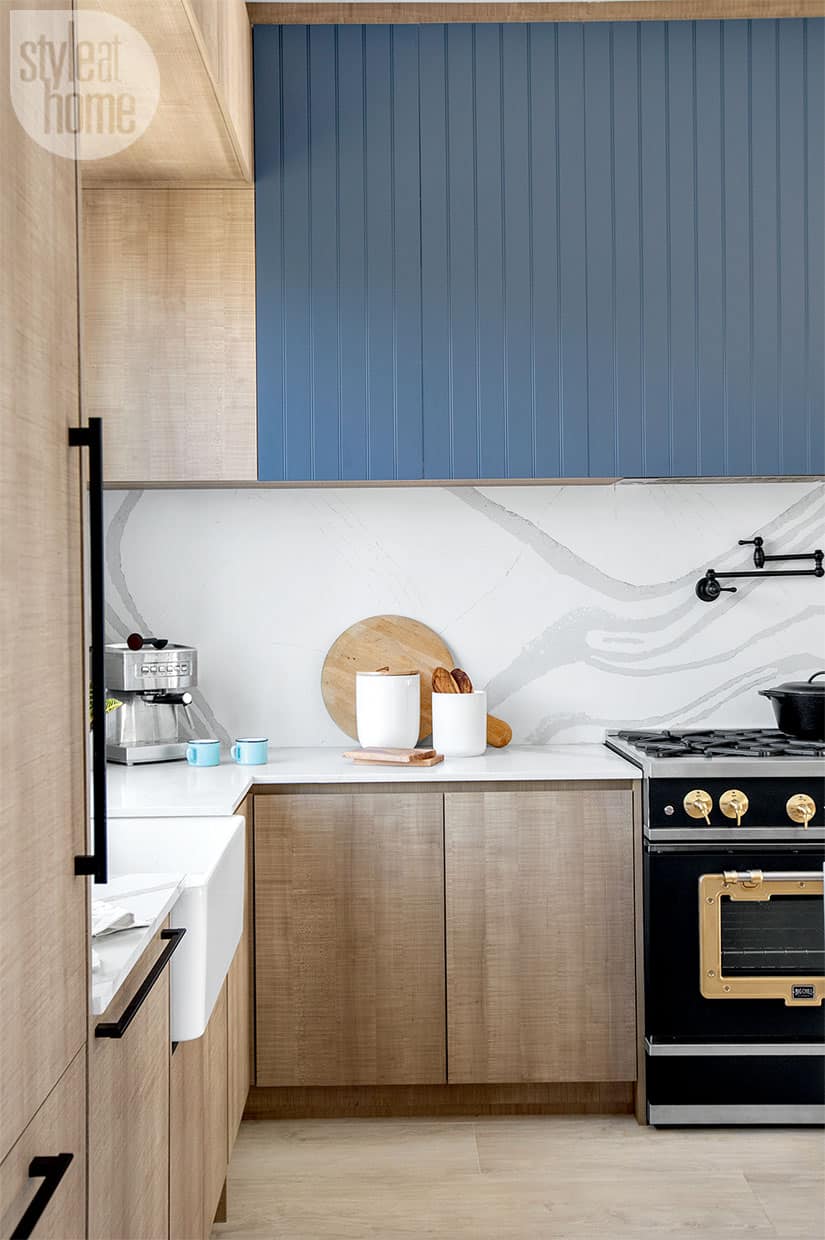 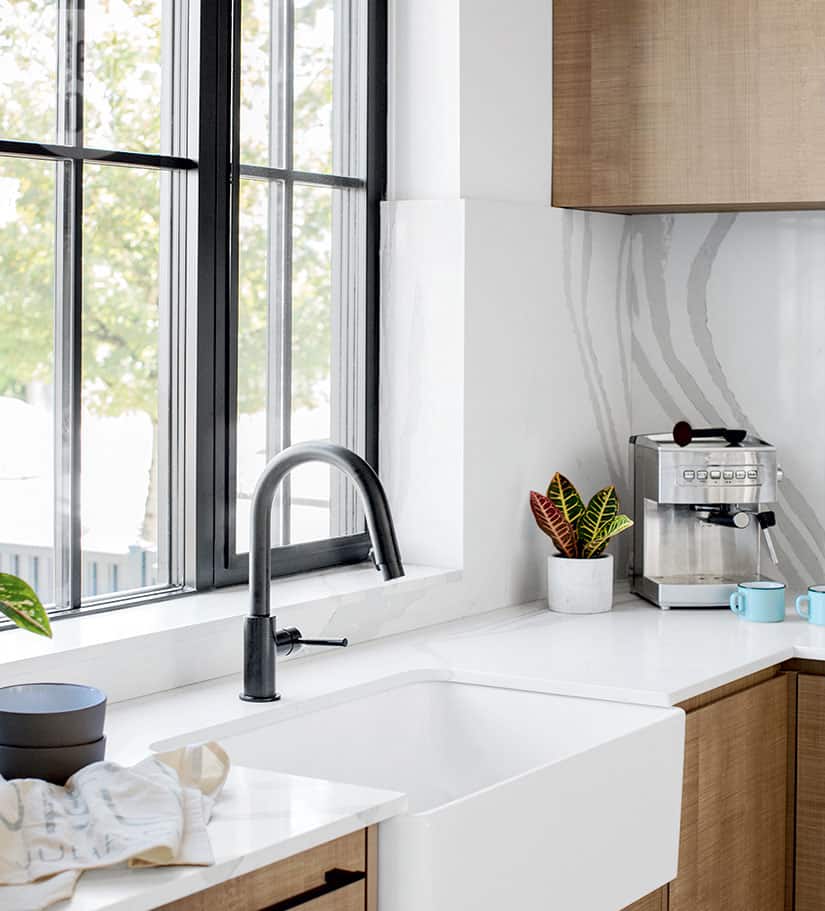 “I wanted the kitchen to feel casual and relaxed without a lot of ornamentation,” says Ami. Flat-front cabinetry and simple hardware fit the bill, as does the apron-front sink. “The homeowners were open to anything, but this sink was non-negotiable for them. It keeps the mood informal.” 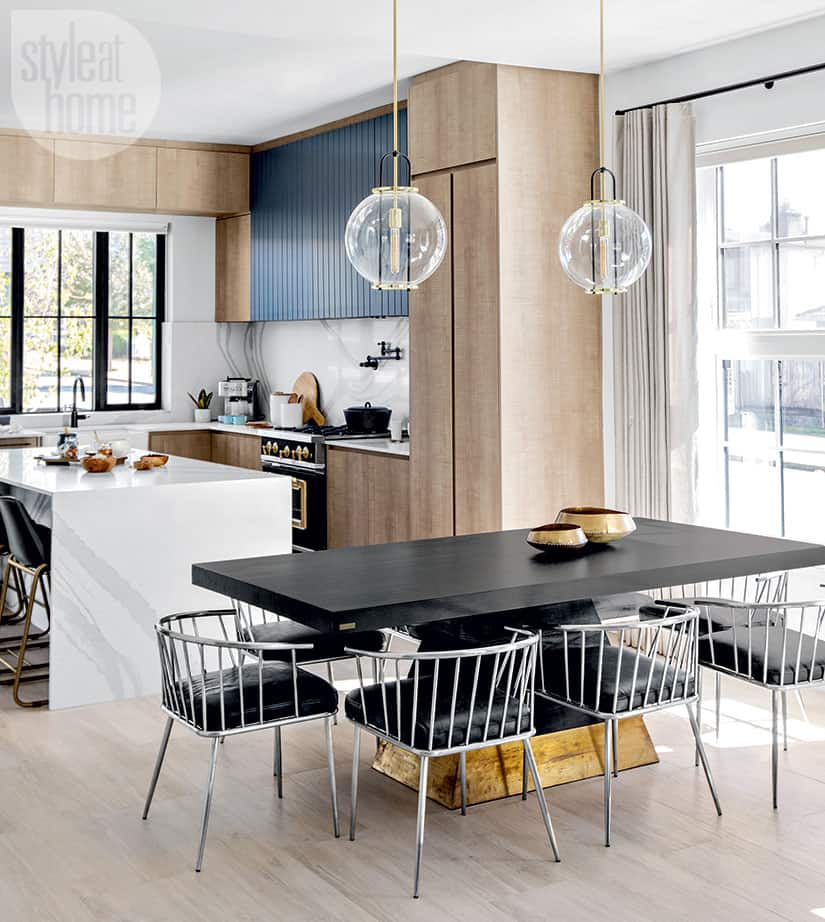 The dining area showcases Ami’s attention to detail. Take the stunning table and globe pendant lights, for instance, which define the space in the absence of a formal dining room. 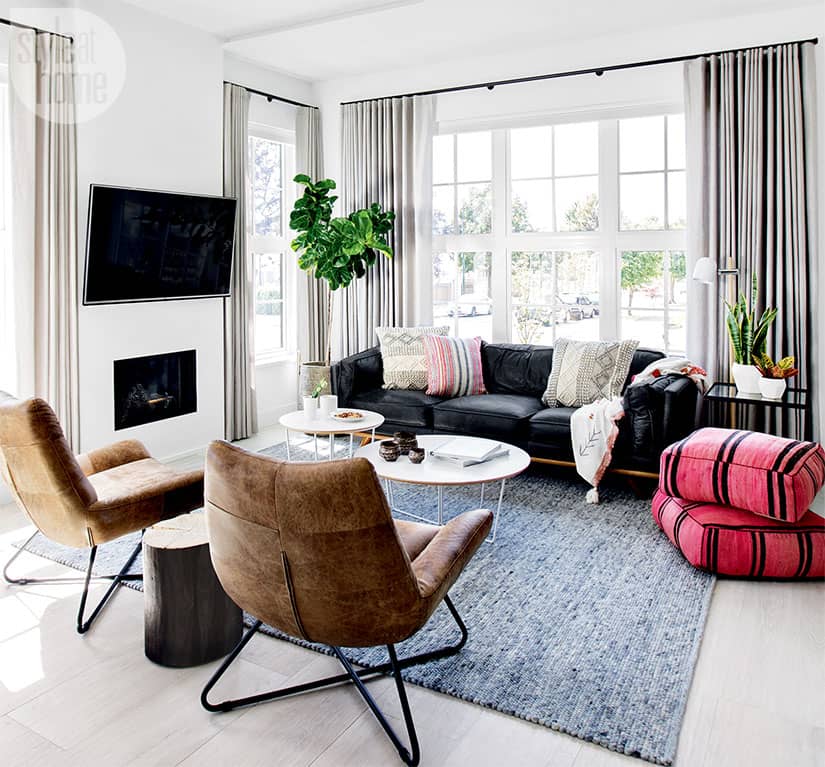 Two coffee tables offer flexibility for these entertainers, and the pouffes affirm this is a family home. “They’re great for the homeowners’ daughters to move around and sit on,” says Ami. 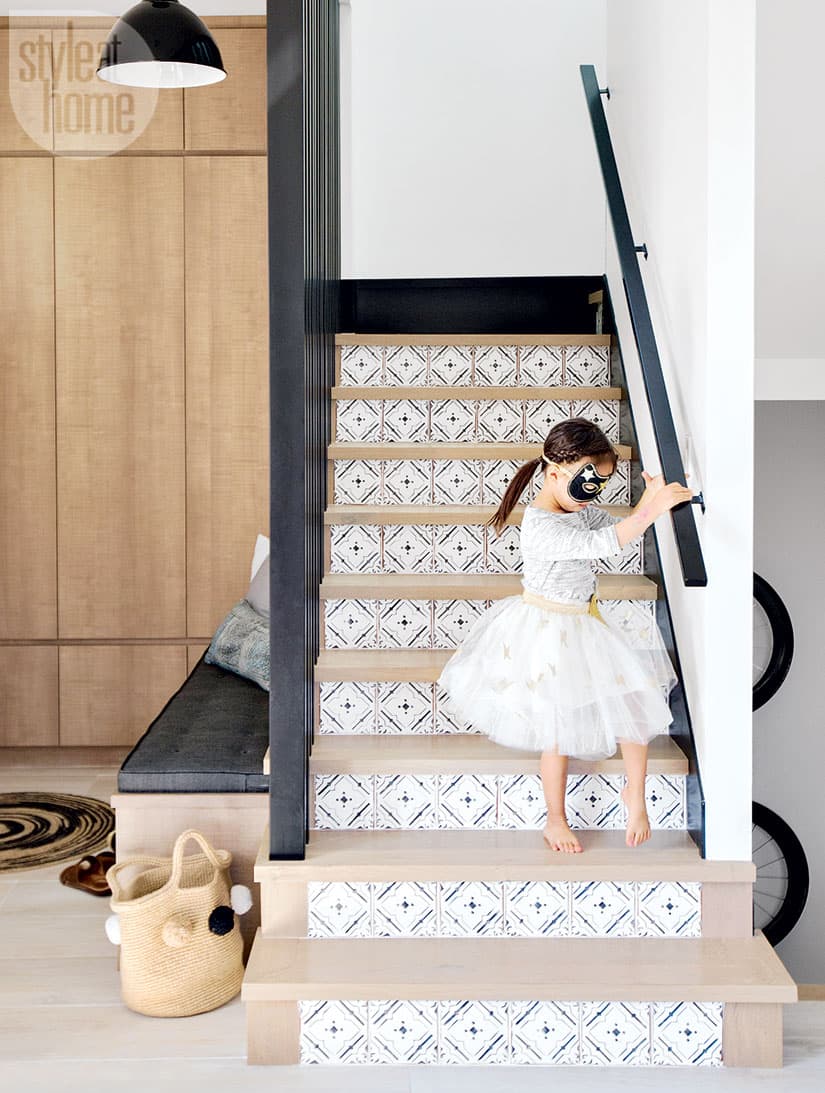 "Since the staircase is visible from the living room, I made it a focal point by facing the risers with beautiful hand-painted French tiles,” says Ami. 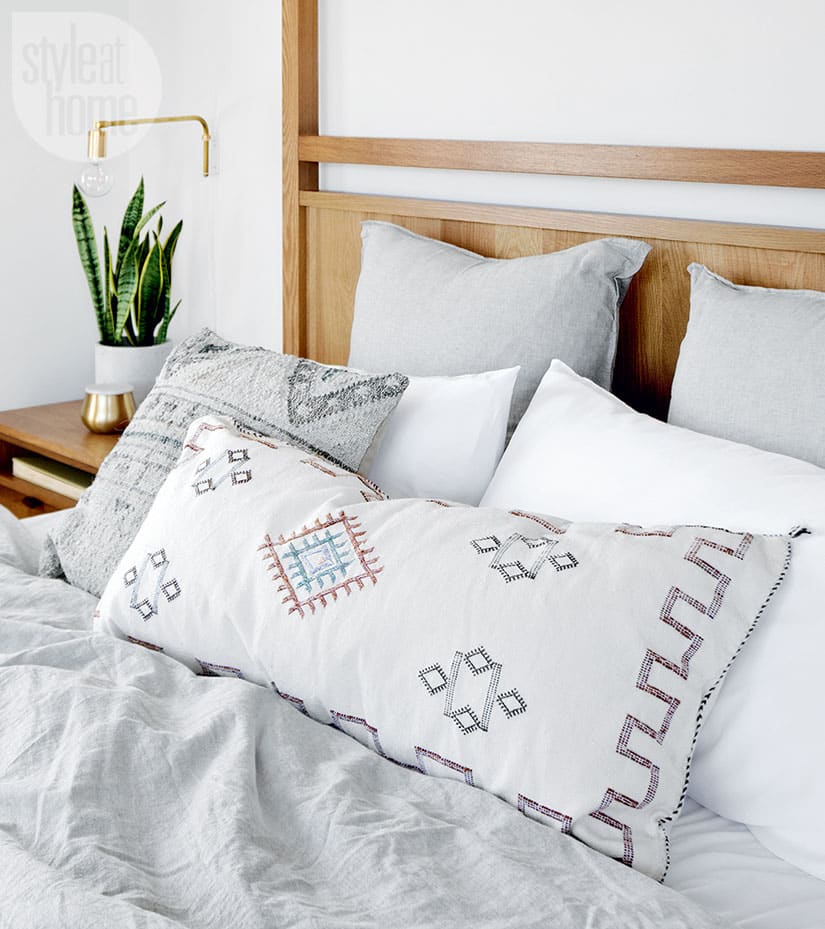 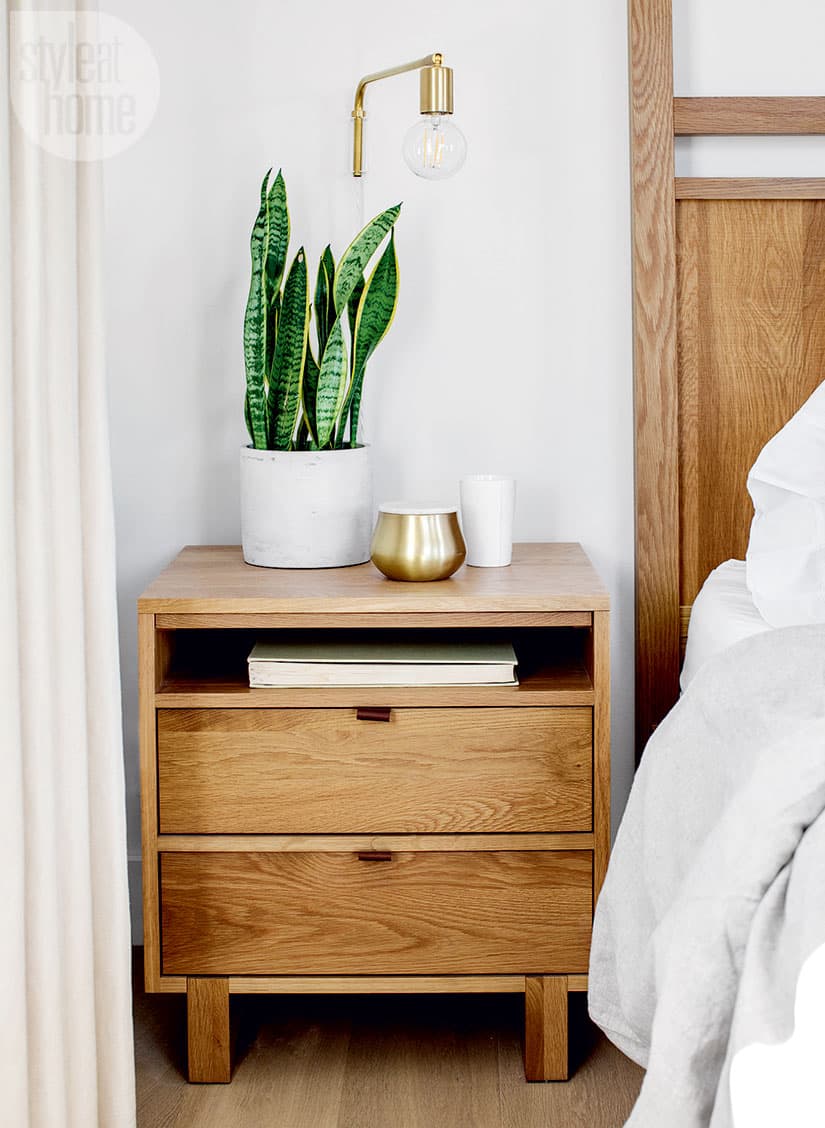 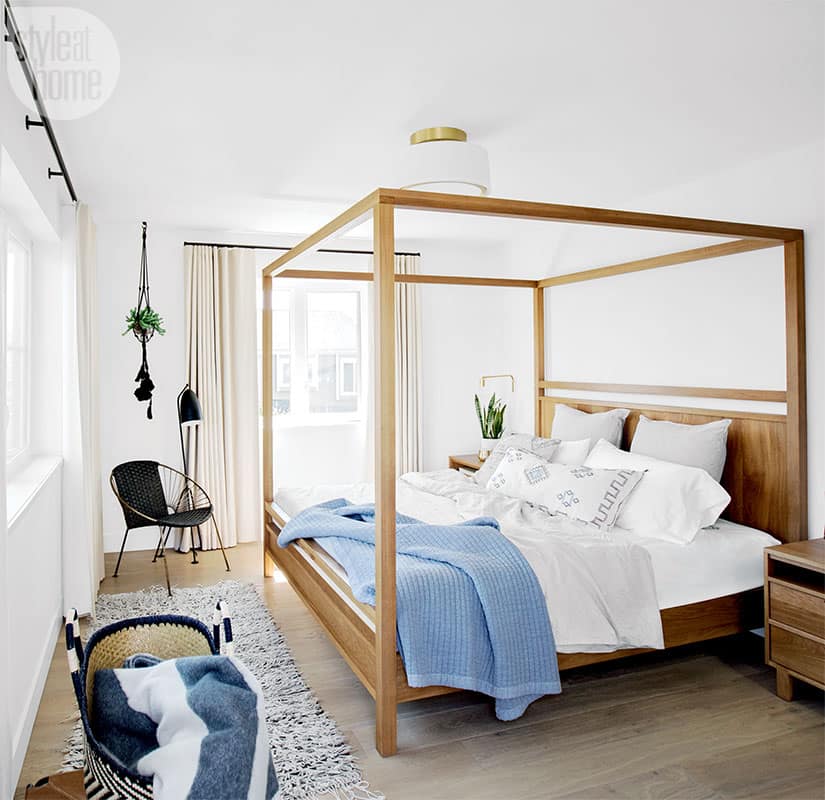 Upstairs, the master bedroom feels more formal thanks to its impressive four-poster bed. “I wanted the couple’s room to be special,” says Ami. “This bed adds such warmth and scale to the room. The mix of wood tones also has a warming effect, and the bedside sconce is simple and functional.” 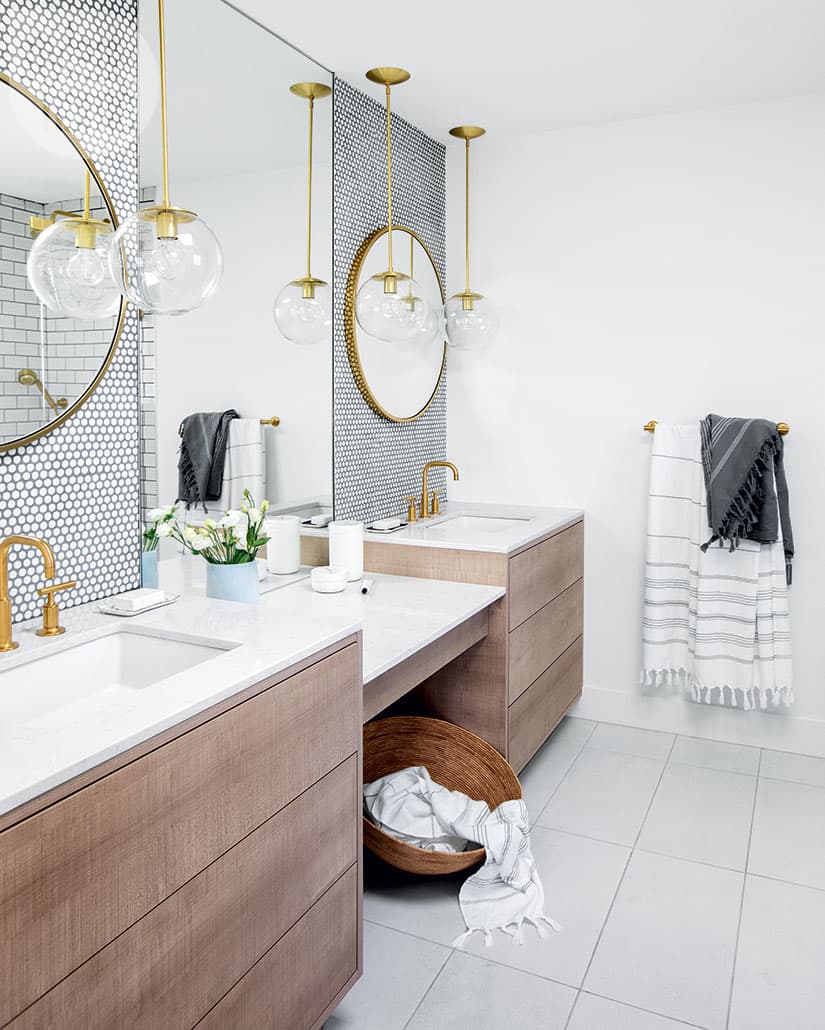 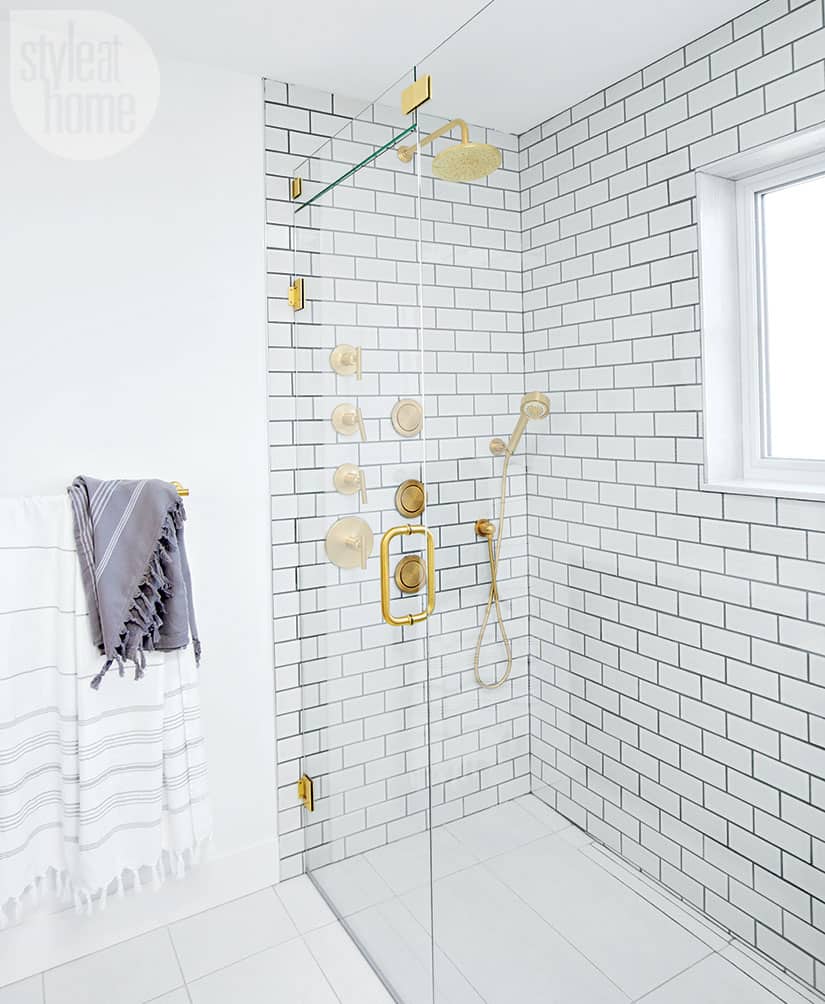 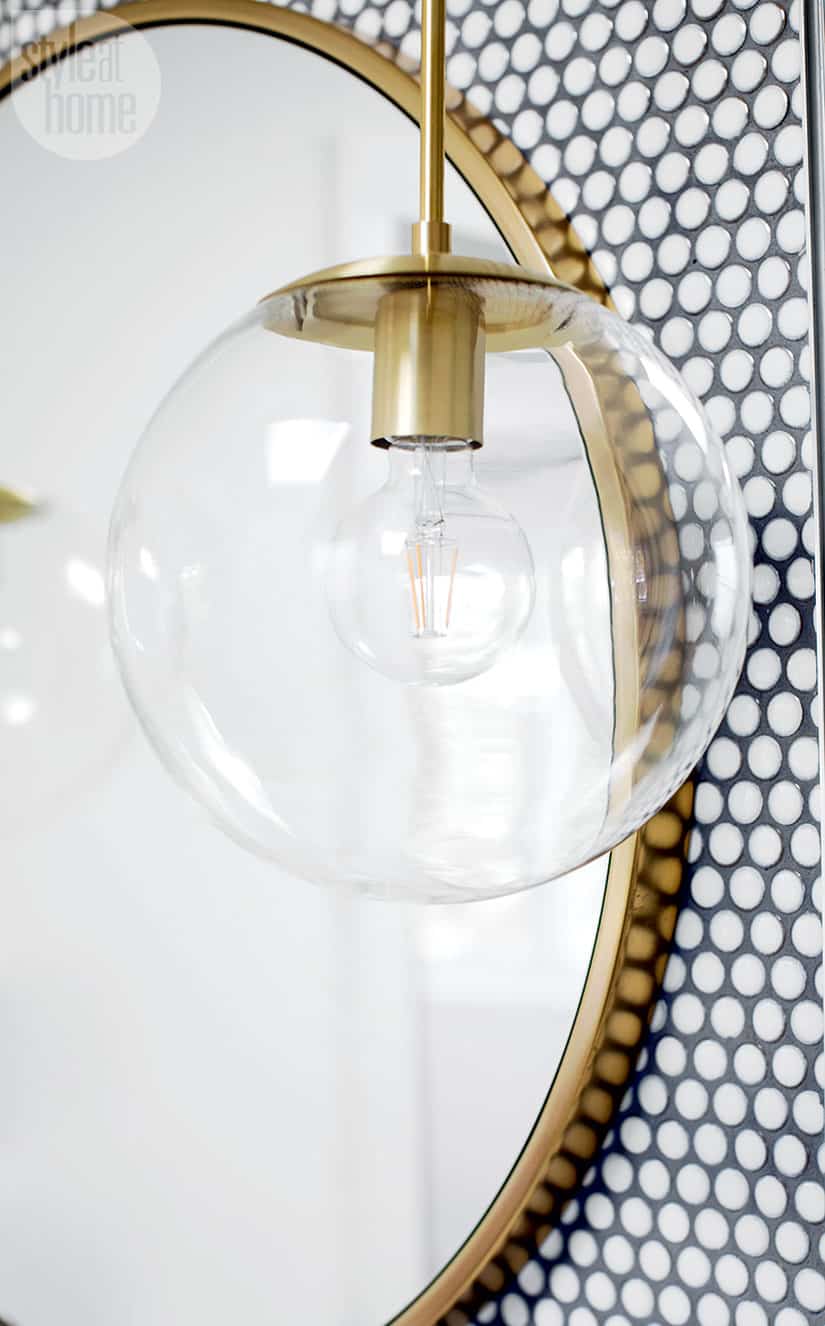 Ami continued the beachy look in the master bathroom with a subtle yet impactful detail: blue grout. “I used it to make the penny round tiles stand out. It also looks fantastic with the brass fixtures,” says Ami. Like the tiles, the round mirrors and globe pendant lights are a foil to the linear sinks and vanities.