Summertime's billowing white clouds and crisp blue skies are an apt analogy for Margie Doyle White's home. Rooms bask in sunshiny brightness, breezy hues pack a fresh punch, and the getaway feel of easy living permeates every nook and cranny. “My style is really beachy and casual,” says the homeowner, who’s also a designer. “And I’m nuts about entertaining.” Translation: This is a chic yet laid-back place where friends hang out drinking cosmos, helping themselves to charcuterie at the kitchen island and chatting the night away.

But, as with all big makeovers, what came before these social scenes was anything but inviting. Margie bought the house two years ago, falling for its leafy location on a quiet cul-de-sac and clocking the potential hidden behind its dated look. “When I first viewed this place, its rooms were primer-painted drywall boxes with floors that were a wreck and an ’80s kitchen with orangey oak cabinets,” she says. “There was zero personality.” For a hostess with the mostest who loves the cheery chaos of a full house, this just wouldn’t do.

Sharing the 2,200-square-foot abode with two daughters (though one is away at school), her partner, Michael, and their cockapoo, Monty, Margie envisioned the finished space through the prism of her fantasy beach house, yet she designed it while rooted in reality. “You should never fight the feel of a house or its surroundings. I may dream about living by the ocean, but this isn’t the Hamptons. It’s a traditional home in the middle of Toronto, so I had to honour that before I could inject any seaside-chic vibes.”

She masterminded an eight-month down-to-the-studs overhaul, which included knocking out the wall between the kitchen and dining room to create an open space conducive to socializing, installing French oak herringbone flooring throughout the main level and introducing a hint of tradition with custom millwork. She even snuck in an extra front hall closet on one side of the archway leading to the living room. “This formal white envelope conveys that this is a city home but still allows me to infuse some beachy fun,” says Margie. 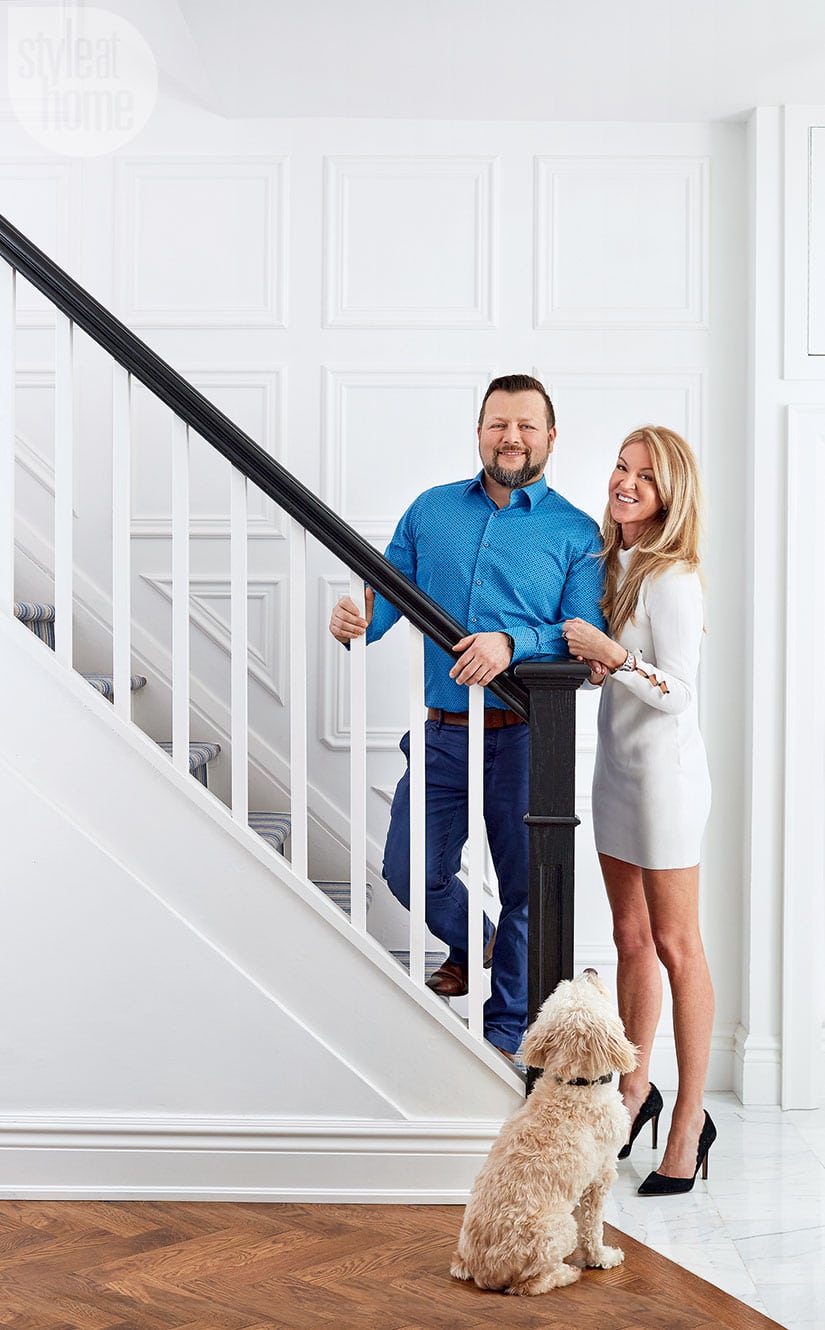 Bright white walls are the fresh backdrop for layer upon layer of powerhouse patterns and hints of sandy taupes and watery blues. “Together these colours create an airy effect that reminds me of being outdoors,” Margie says. Wherever possible, she balanced traditional elegance with toes-in-the-sand simplicity by countering something luxurious, such as the Italian marble in the fireplace surround, with something humble like seagrass and jute rugs.

It’s a dynamic tension found throughout the house: The dining room’s contemporary light fixture is perfectly in sync with its antique farm table; the utilitarian mud room boasts silk grasscloth wallpaper; and slipcovered furnishings seamlessly coexist alongside a spare-no-expense marble-lined bathroom. To Margie, it’s a design that marries urban living with coastal charm. “Sometimes I feel more like I’m living in a summer cloud than in the middle of a fast-paced city,” she says. “And sometimes, even the beach.” 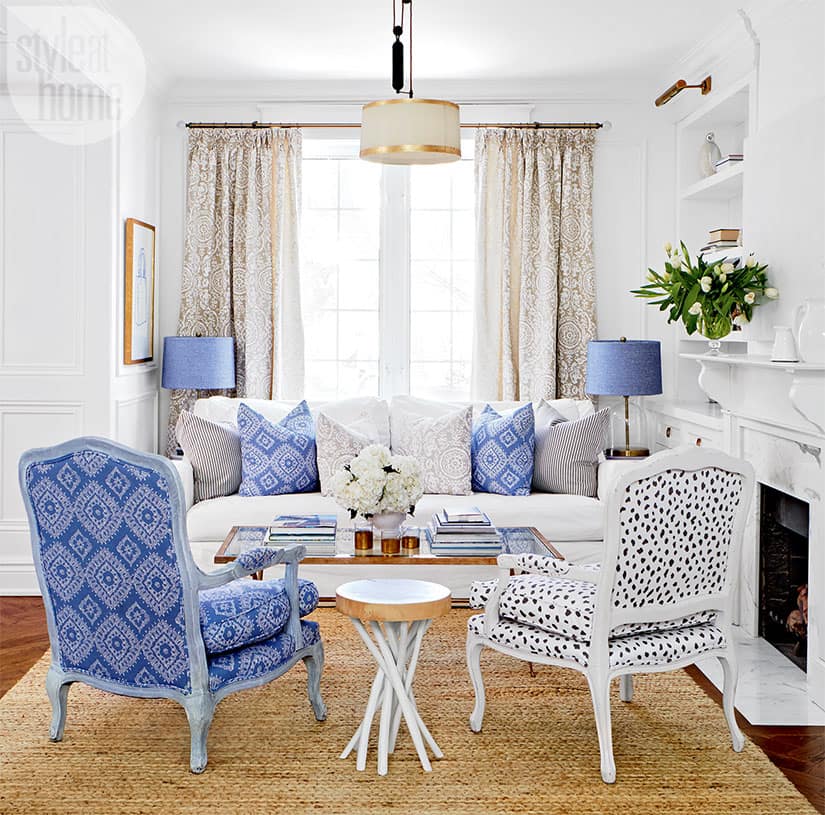 In the living room of this Toronto home, white walls, cheerful motifs and a textured rug conjure the Hamptons aesthetic homeowner Margie Doyle White, with her contractor, Dariusz Kondratowicz, craved. The lone cheetah-print Bergère chair is testament to her carefree approach to using pattern – never prescriptive and always whimsical. 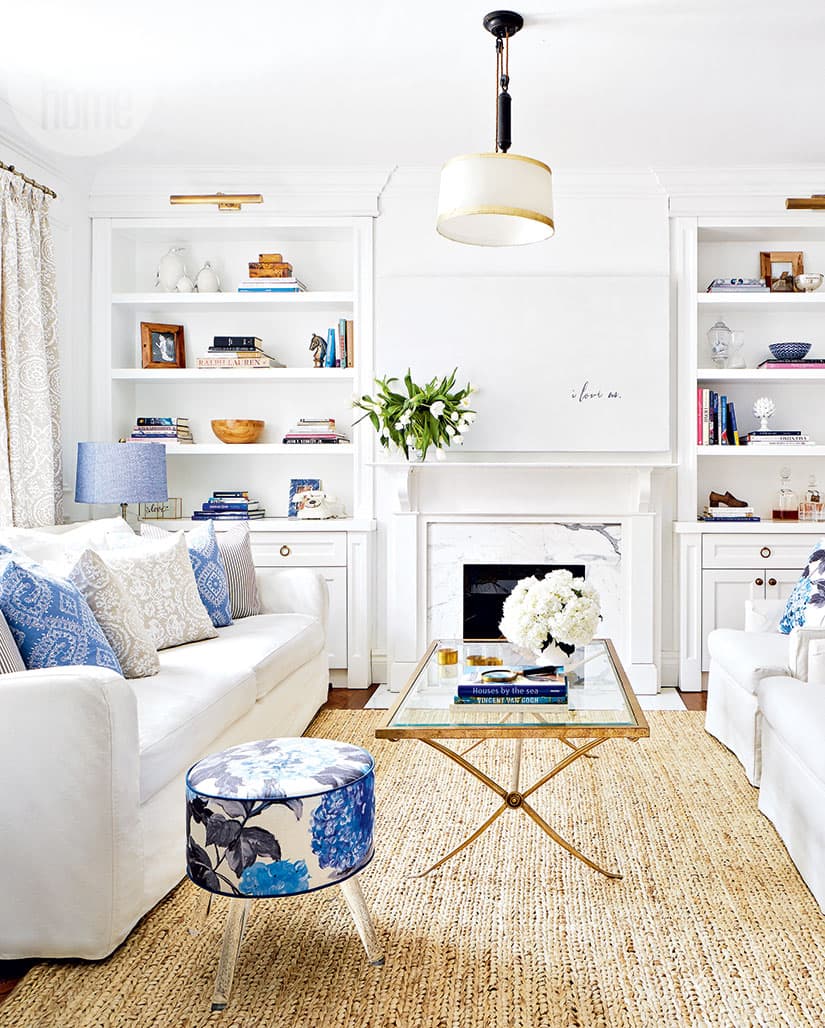 Custom-built cabinets flank the living room fireplace and create a symmetry that places equal emphasis on classic design and cherished tchotchkes. At night, picture lights above the shelves cast a cozy ambient glow. 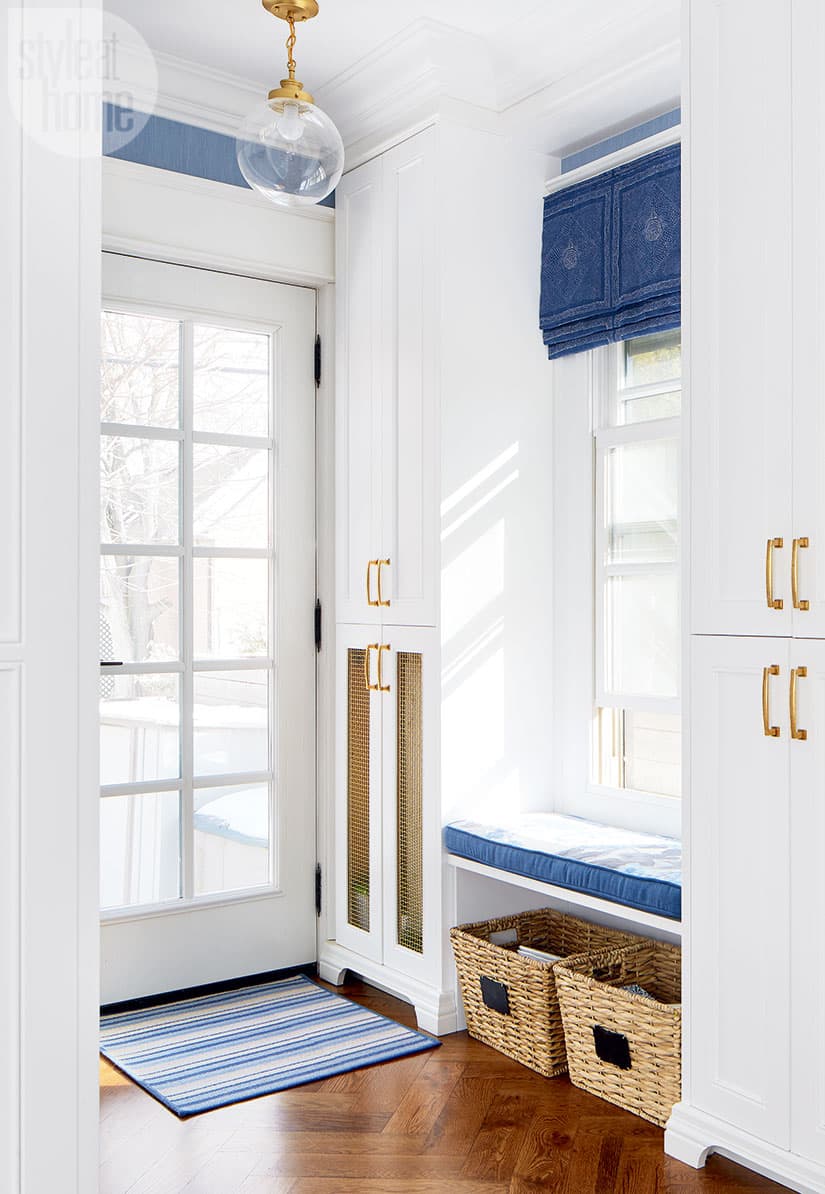 With its floor-to-ceiling cabinetry, the mud room is not only the gateway to the backyard, but also a hub of smart storage. 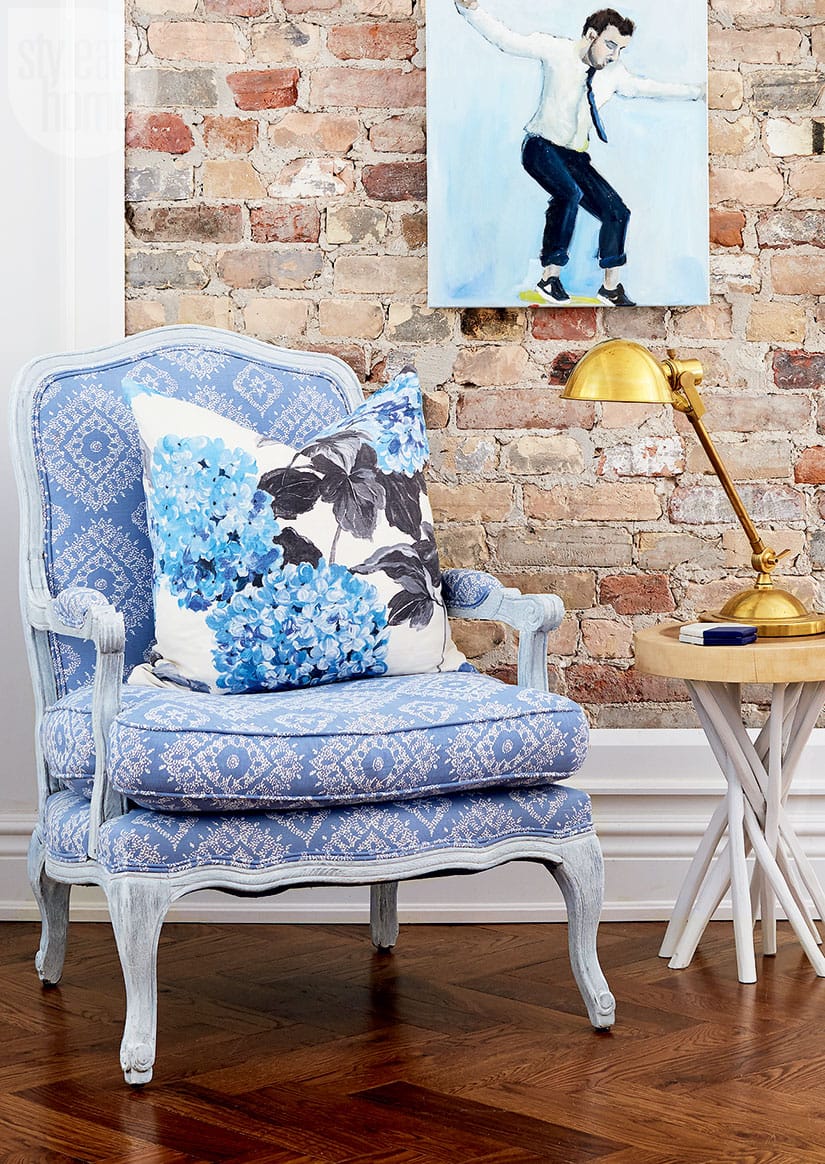 “This chair fabric is actually from a duvet cover I bought up north,” says Margie. “My advice: If you see a pattern you love, make it work for you.” 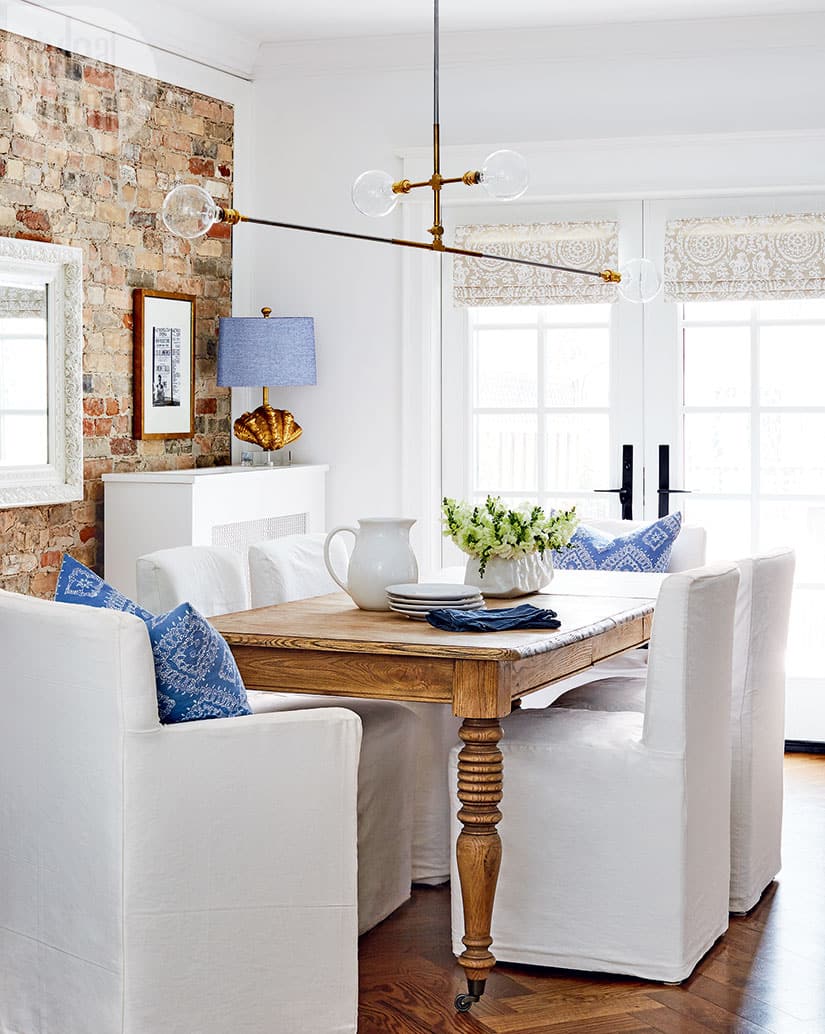 The dining room is open to the kitchen so it had to be casual. “I designed comfy seating that guests could sit on for hours because I love a good dinner party,” says Margie. The patterns on the blinds and toss cushions reference those in the living room for continuity. 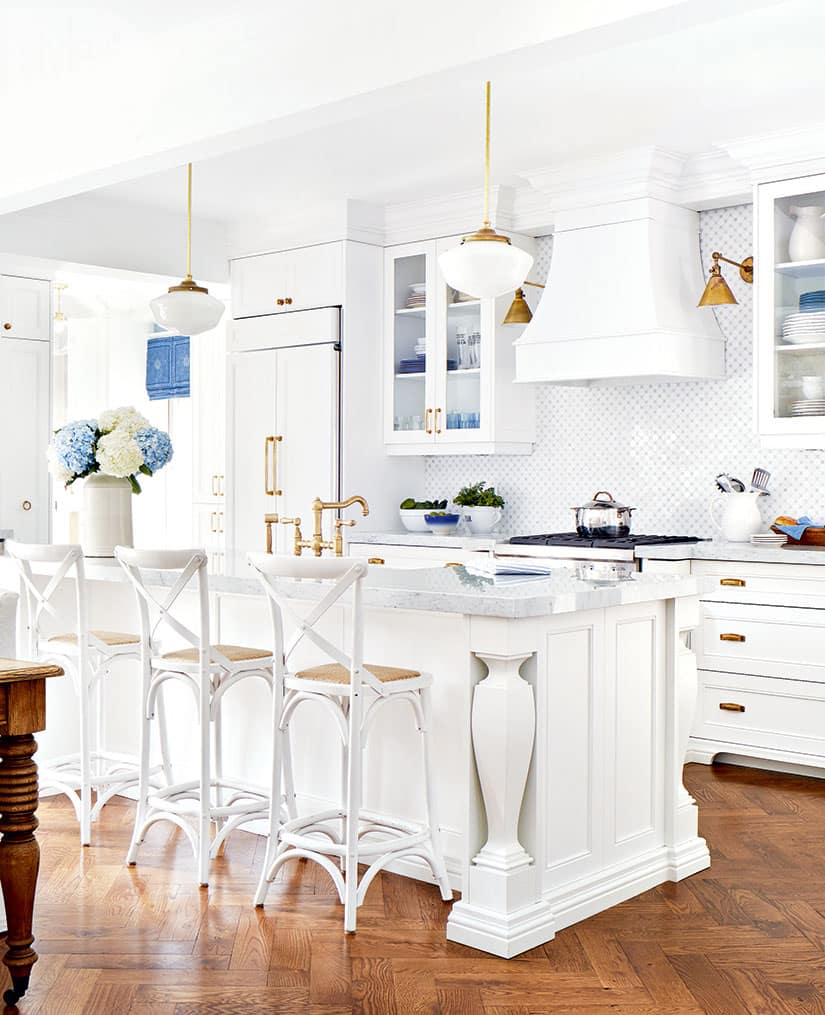 “Some people have a shoe addiction; I have a plate obsession!” says Margie. Extra-deep drawers, ceiling-height cabinetry and island storage house her collection. A stunningly simple backsplash of mosaic marble tiles adds a bit of gloss and has subtle blue undertones, which tighten the link to the sky-coloured accents throughout the home. Brass accessories lend warmth and a playful vintage vibe. 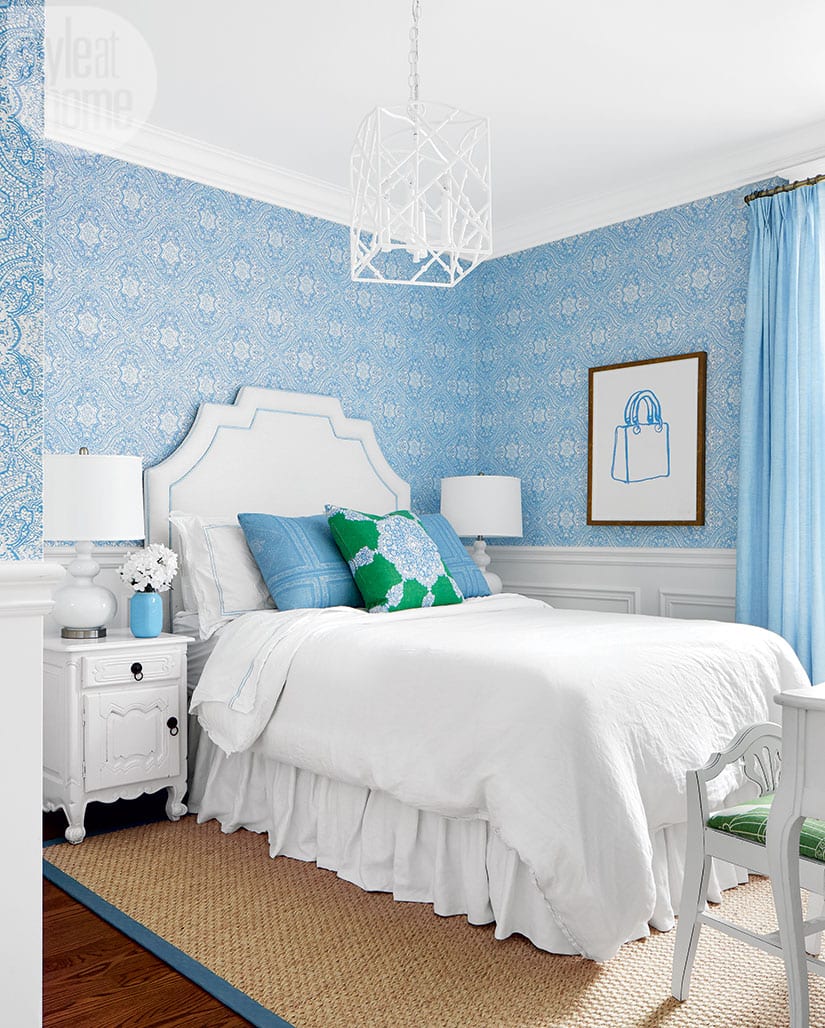 “I wanted [my daughter] Halle’s bedroom to be as dreamy and as pretty as she is,” says Margie. Wallpaper and wainscotting do more than simply play homage to the home’s traditional style. “The wainscotting adds texture and makes the room so much fresher than floor-to-ceiling wallpaper would.” 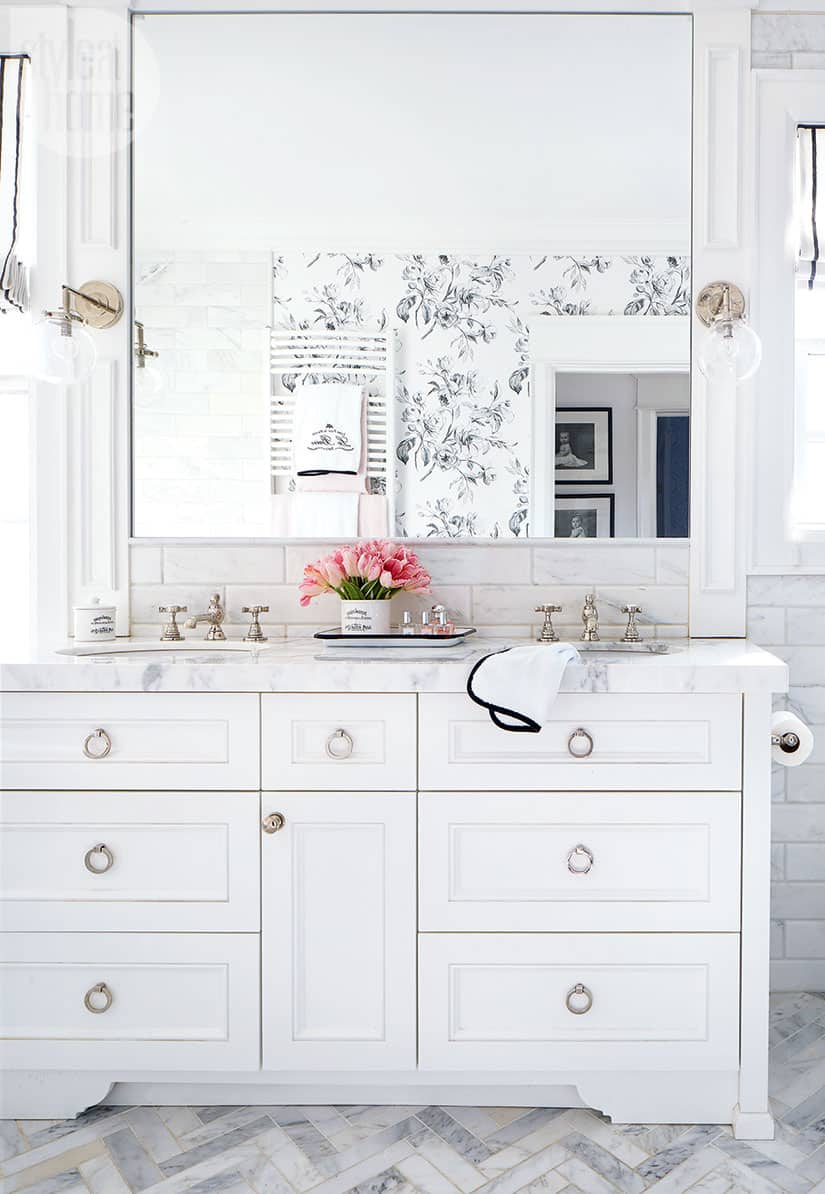 In contrast with the rest of the home’s colour scheme, the master bath is a white-on-white marvel of marble. Margie’s sensibility for using pattern is evident in the tile work – a mix of subway and herringbone for a subtly charged contrast. 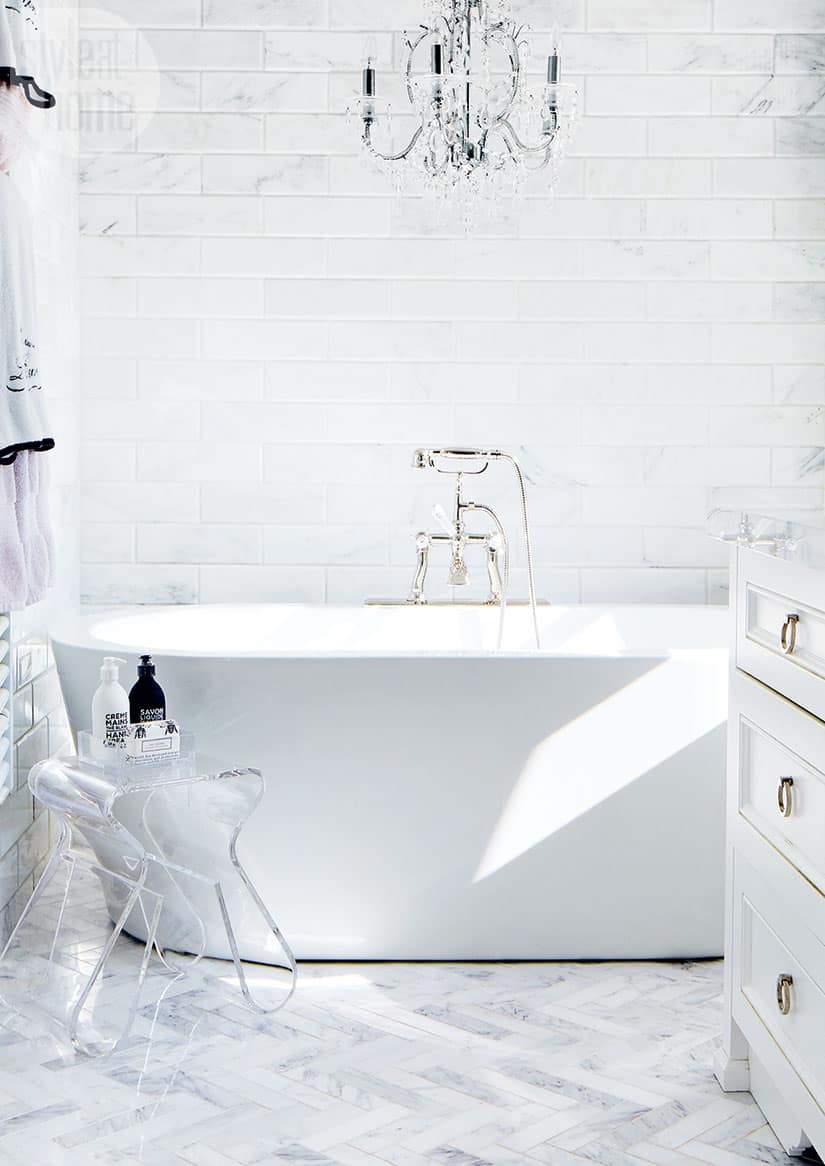 The tub was positioned to take in the view of the leafy backyard, and the chandelier above it is elegant and playful.

1 Go tonal.
“If you’re going to mix colours, there is only one rule: Make sure they share the same warm or cool undertone. Avoid matching cool shades with warm ones at all costs – it creates a mucky effect that’s anything but fresh and light.”

2 Respect scale.
“When mixing patterns, look at the scale of each one. You can mix any patterns so long as they share the same scale, whether all tiny prints or all big.”

3 Use liberally.
“Think beyond toss cushions! Even though I love them and every room should have them, it’s important to incorporate patterns in other ways, such as with Roman shades and drapery. That way you have a beautiful layered effect throughout the room and the house.”