Debbie Travis takes on the renovation challenge of a lifetime to create the perfect vacation property for hosting ladies' getaways.

Converting an ancient Tuscan farm on a UNESCO World Heritage Site into a dream home with modern amenities comes with its challenges (piles of permits, a litany of limitations and language barriers to boot), even for an icon who’s built her celebrity around tackling tough renos.

When homeowner and decorating guru Debbie Travis bought the rundown 100-acre Italian property, she was beginning a new chapter in her life. She was ready to devote her time, energy and just about every waking thought to transforming the 13th-century-watchtower-turned-farm into a luxury vacation retreat for women of all ages. Accommodating up to 24 guests, Debbie Travis’s Tuscan Girls’ Getaway is a place for visitors to connect and escape the everyday. “It’s been a labour of love,” says Debbie of the project that’s consumed her for five years. “Every square inch of this space has a story – often a painful one.”

It took one year of chasing permits followed by four years of construction – involving up to 85 tradespeople a day—to overhaul the old farm, which had fallen into wrack and ruin over the centuries. Says Debbie: “My friends couldn’t see my vision through all the rubble.” Most buildings on the property were removed and reconstructed as guest houses according to the strict local guidelines (namely, on existing footprints and honouring the original aesthetics, right down to rooflines and window sizes). The central villa, however, was left intact... which isn’t to say that it wasn’t transformed.

The three-storey building was completely gutted, save for the eight soaring arches, which were simply power-washed. (“The contractors were shocked I didn’t want to fill in the cracks,” says Debbie. “But I was like, ‘No way! I love those cracks!’”) Walls were cleaned up with pristine white plaster, while the ceilings were accentuated with beams from a local architectural salvage site and the worn main-level flooring replaced with white stone slabs from a Sicilian piazza. “The original floors were so pitted from animals that you couldn’t steady a table on them,” says Debbie.

Animals? “On poor farms of the past, livestock often had more worth than the people,” she explains, noting that this structure was once a stable. “So they were protected indoors, and the humans lived above them, relying on the animals’ body heat to keep themselves warm through winter.” To prevent the animals from coming up, the villa’s stairs were located outside, so Debbie had to have indoor ones built. Made of hot-rolled steel, the modern backlit staircase highlights the stone wall behind it.

Lighting presented another unique predicament for Debbie: Without any drywall to hide the wiring, pot lights were out of the question and other options were limited. After visiting trade show upon trade show, Debbie found minimal, modern strip lights for the main living areas that tuck behind the beams and let the architecture shine.

The juxtaposition of old and new is a theme carried through the whole property, from the simple contemporary furnishings indoors and out to the bright and near-neon accents that bring freshness to the antique setting. But only a splash of colour was needed: “I wanted the natural elements of stone and metal to shine, and it’s so vibrant outside year-round, thanks to the Tuscan blue sky and verdant surroundings,” says Debbie.

Indeed, the site’s 900 olive trees (some of which are 800 years old) stay green all year long, and from them, Debbie extracts high-quality olive oil that’s sold online. She’s still perfecting the wine that comes from the grapes in her vineyards, and she uses her lavender harvest to produce body and essential oils. “It started as a hobby farm but has since become quite a passion,” she says. But this farm – and Debbie’s new chapter – is really about creating a retreat in which like-minded women from all over the world can recharge. And in such a storied home, in this perfectly pastoral setting, under the hot Tuscan sun, guests invariably find themselves beginning their own new chapters. 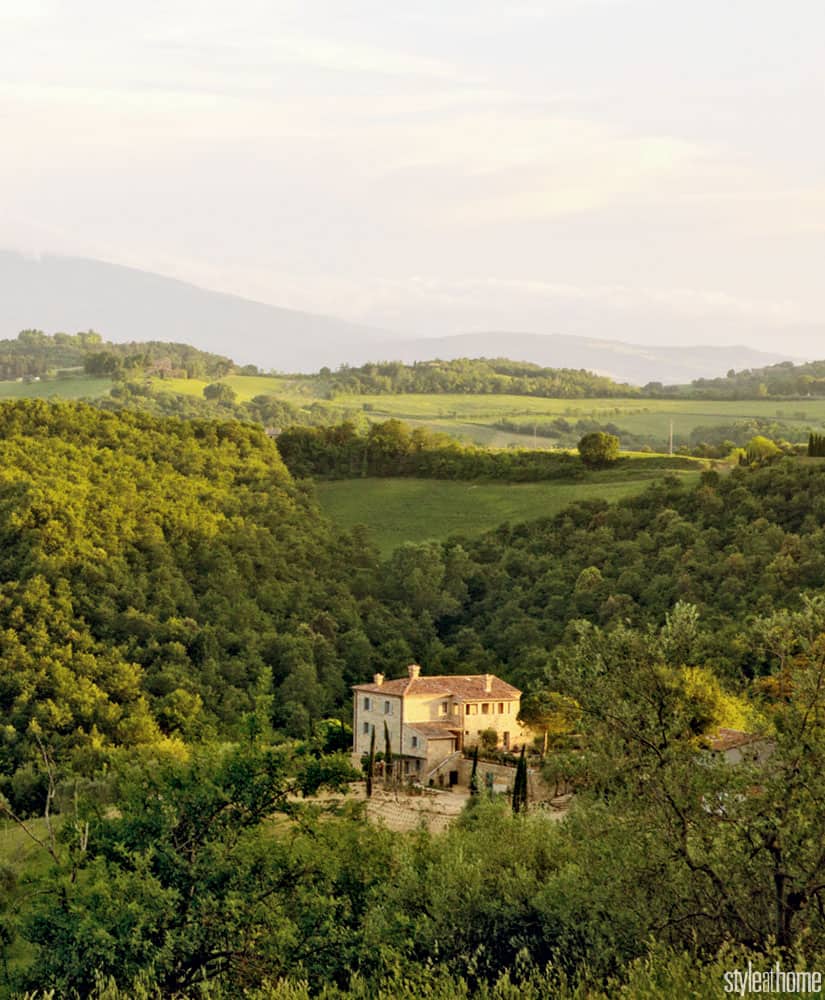 This ancient-guard-tower-cum-women’s-retreat sits on 100 acres of the UNESCO World Heritage Site that is the Val d’Orcia in Tuscany, Italy. on it, you’ll find a lavender field, a veggie garden, an olive orchard, a vineyard, multiple dining areas, an infinity pool, a bocce court, a yoga area, a firepit and 200-year-old pomegranate trees that yield enough juice to freeze for winter. 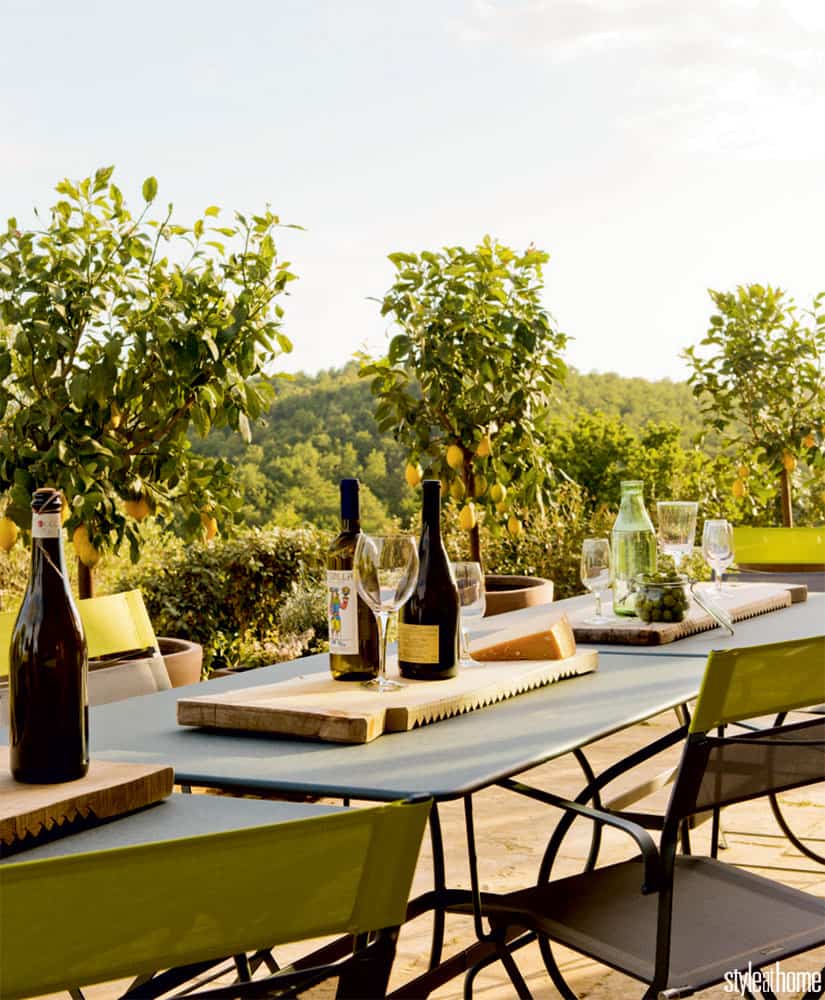 “We pick lemons here every morning,” says homeowner Debbie Travis of the potted trees on this terrace, which is outfitted with modern citrus-green-accented chairs to match. 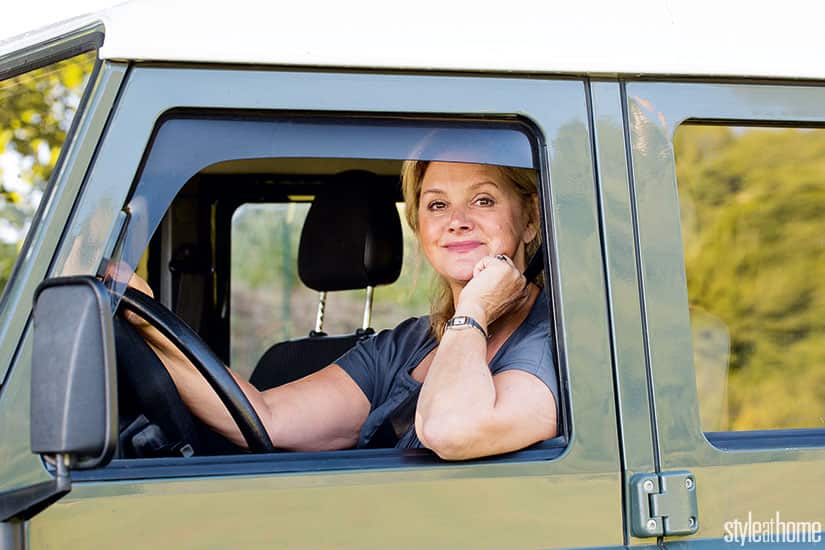 From searching sprawling avant-garde design shows to trawling Europe’s biggest antiques markets, shopping for materials was a highlight for Debbie (pictured). “I’d drive to spots in France, Italy and England and load up my truck,” she says. One of her favourite sites is L’Isle-sur-la-Sorgue in France, where an entire town transforms into an antiques market twice annually. “I drove 11 hours to get there,” says Debbie. “When I saw it, it took my breath away.” 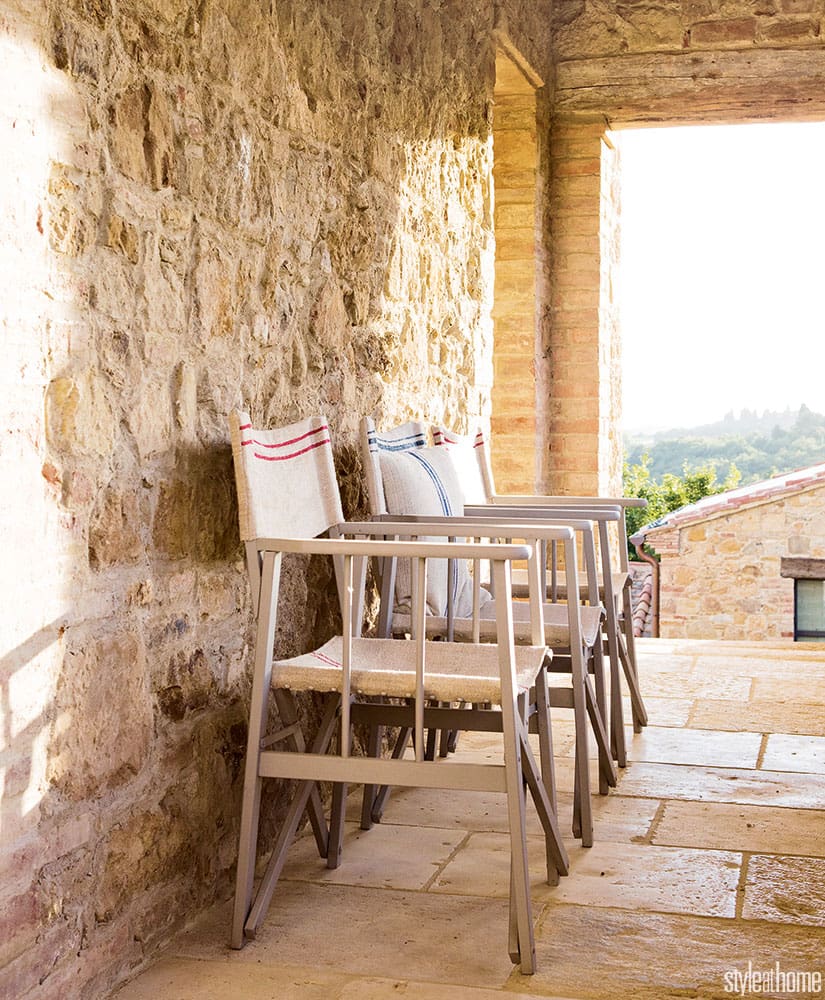 Debbie found these cool director’s chairs at an antiques market. She echoed their simple sacking fabric on the headboard and toss cushions in one of the guest rooms. 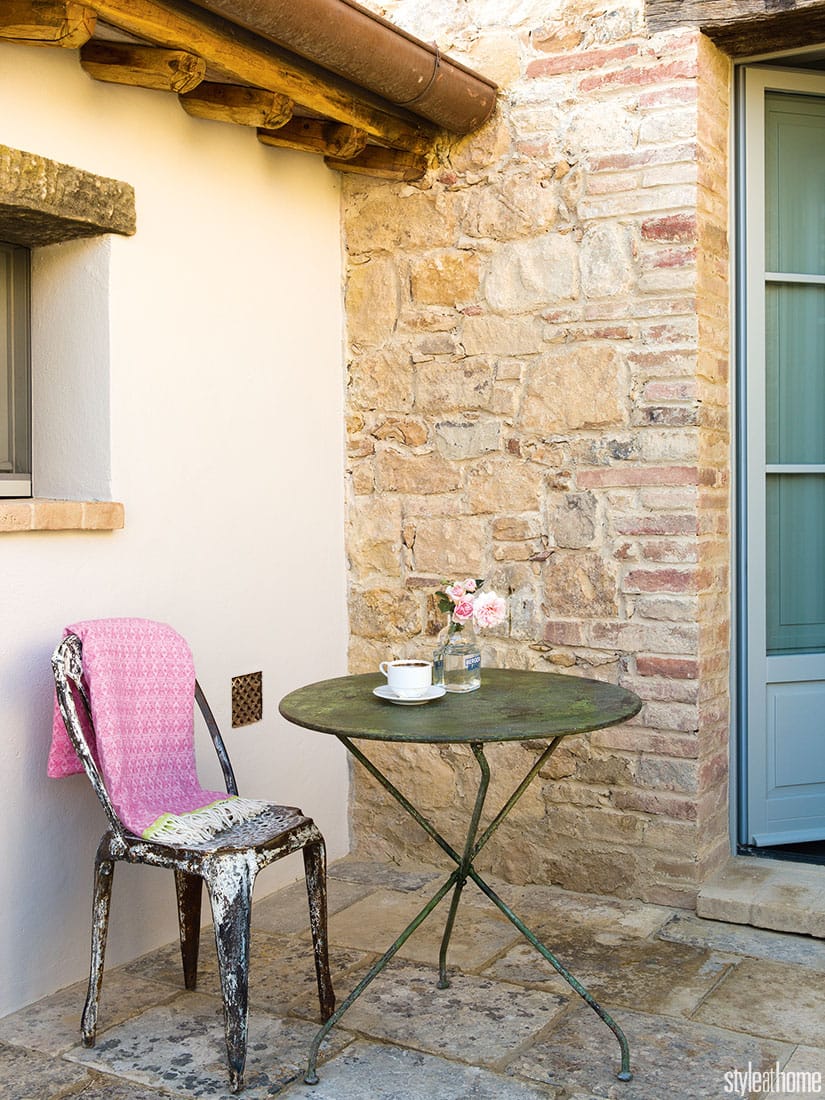 Debbie considered absolutely everything, right down to the smallest details, from choosing the tiny air vent grates to opting for stone window lintels instead of wooden ones. “Even deciding on the thickness of the terracotta tiles for the windowsills – I nearly died,” she says with a laugh. Hits of pink brighten the vintage chair and bistro table. “I never touch a natural patina,” says Debbie of their distressed finishes. “Nobody can recreate that, not even me.” 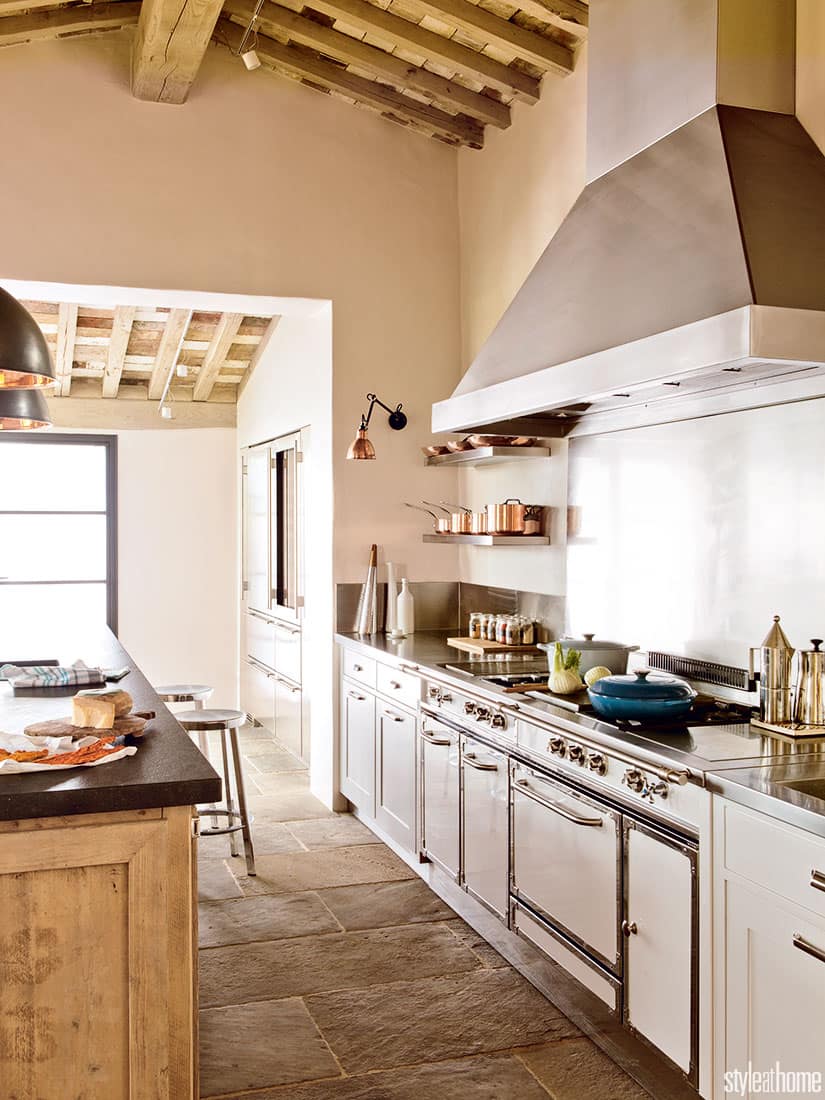 The semi-industrial kitchen, where cooking classes take place, boasts two dishwashers and a range customized with eight elements, a grill and a pasta cooker. In addition to the oversized appliance, Debbie insisted on a 16.5-foot-long island countertop, despite being warned it would look ridiculous. But when it arrived, she hated it. So, amid curses from her kitchen designer, Debbie had it replaced with a 13-foot- long one. It took 20 people to carry in the second slab of volcanic rock, which, at the last minute, was dropped and smashed. As they say, third time’s the charm. 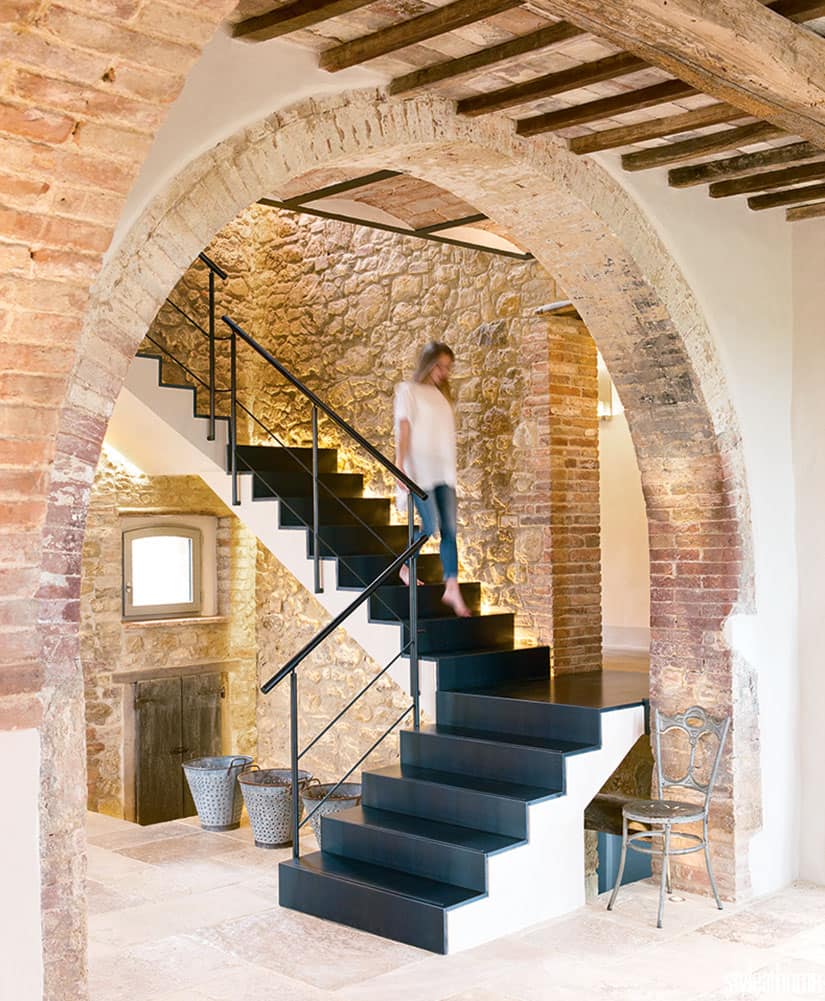 For the dramatic stairs, Debbie used the same hot-rolled steel as she did on the kitchen floor of her former home in Montreal. “It stays cool in the heat and has a lovely grey tone,” she says. Set two inches from the wall and lined with strip lighting, the contemporary staircase seems to hover by the original stone wall to stunning effect. 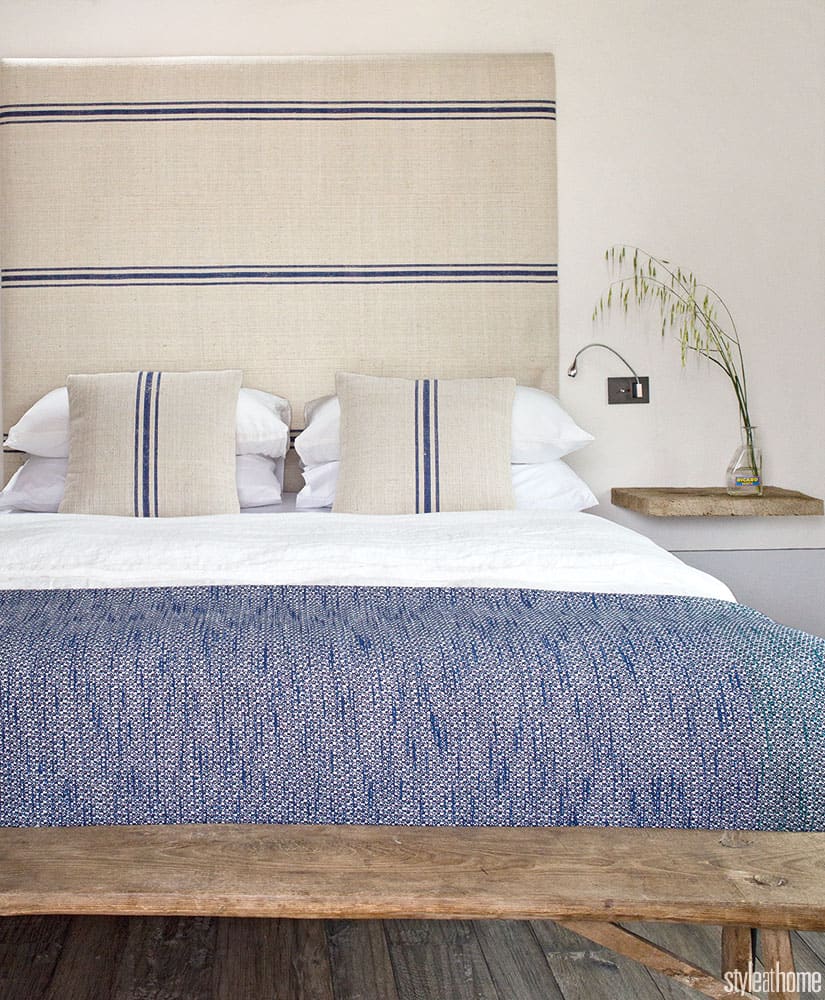 The guest rooms are wrapped in a serene white and grey envelope, but each features a bold accent hue carried from the headboard to the bedding (here, it’s denim blue). 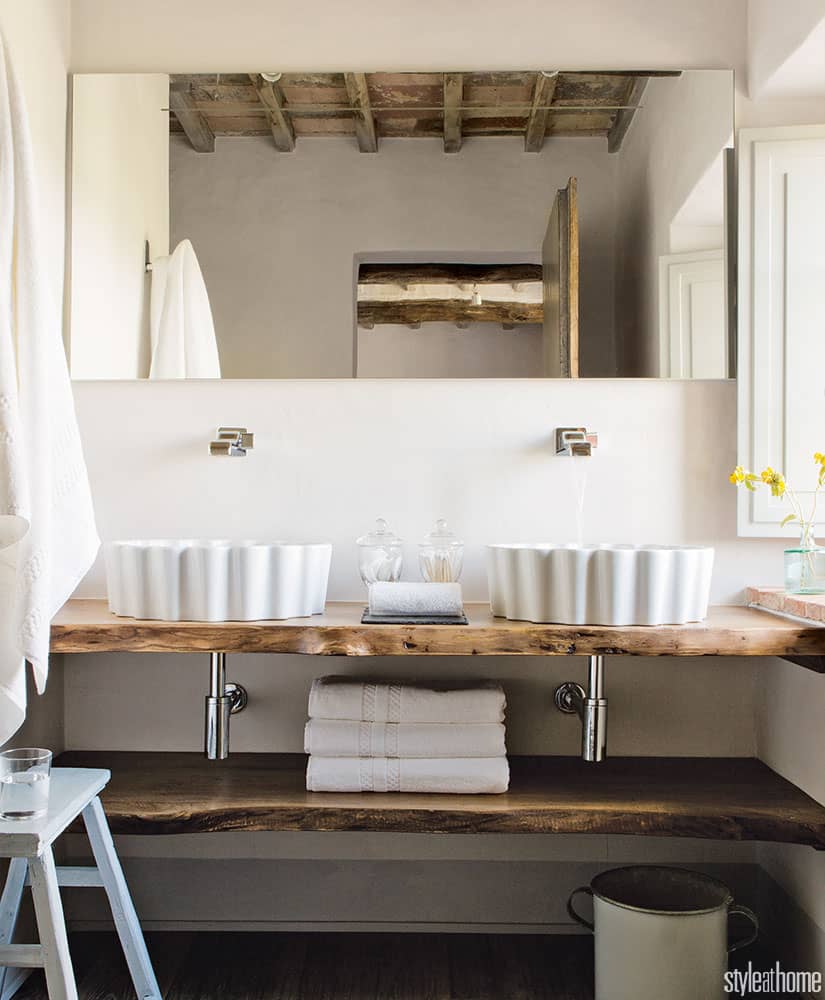 In one petite bathroom, a pair of ruffled sinks by Italian designer Paola Navone is set in a floating slab of live-edge olive wood. Each guest room and ensuite is totally different (“Visitors always have fun checking each other’s out,” says Debbie), but all the mirrors are the same: they look normal but have built-in defoggers and lights that, when turned on, create the perfect setting to apply makeup (“they’re so great, guests have even arranged to have them delivered to their own homes after visiting,” she says). 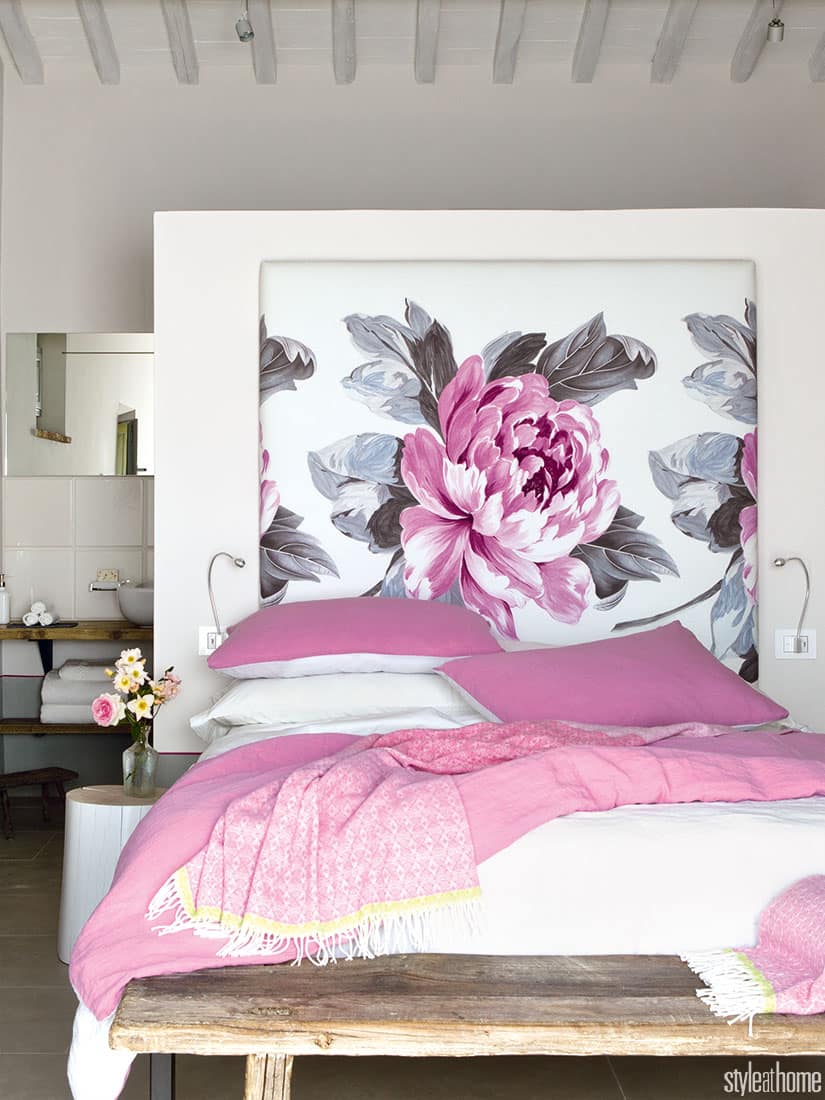 Partial walls divide guest rooms from their ensuite bathrooms, lending the illusion of more space and allowing full views of the stunning ceilings. “They’re like art,” says Debbie. after visiting a ton of lighting shows, she worked with an expert to design her own modern, minimal touch lights, which are adhered to the bedroom walls as reading lamps. 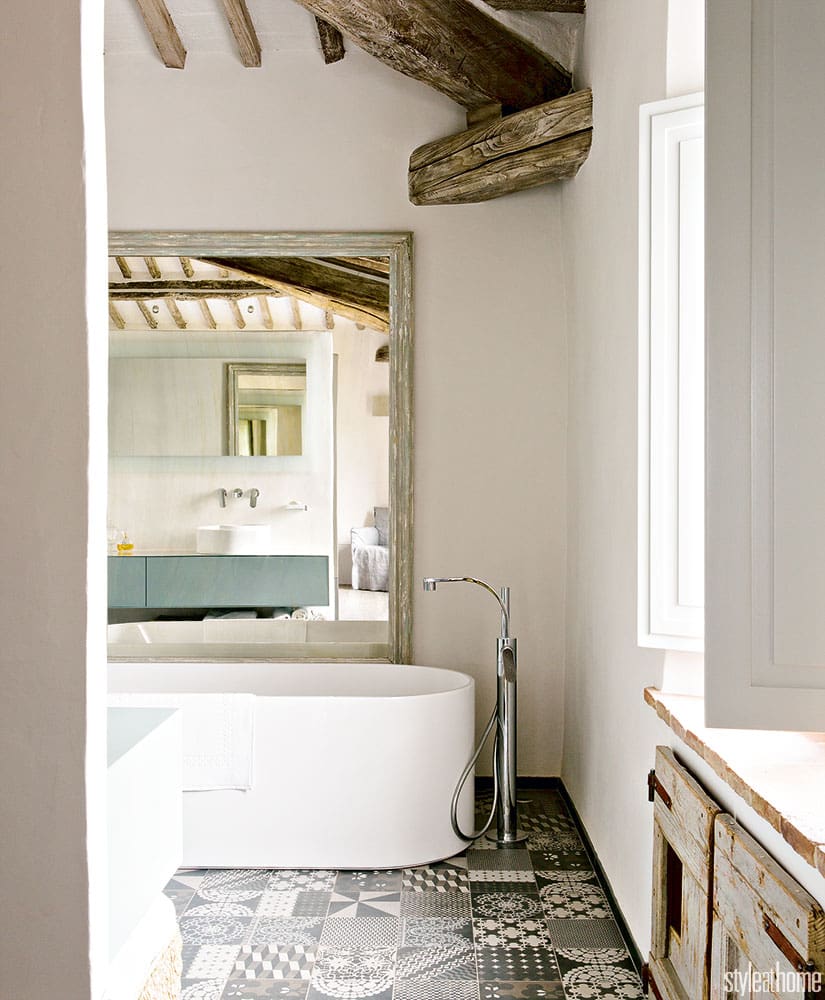 In Debbie’s master bathroom, a sleek tub and faucet are paired with antique wood details and old-world-look cement tiles. “When each is used with restraint, old looks spectacular juxtaposed with new,” she says.