A Toronto-based photographer draws on her Danish roots to create a luminous holiday.

Apparently, what happens in Denmark doesn't stay in Denmark. As a child, photographer Stephanie Kretzschmer spent Christmases overseas amid a joyful group of rosy-cheeked cousins. “Although we didn’t speak the same language, we played together non-stop, and I always felt so welcome,” she says. “The decorations were simple, and the emphasis was on the feeling of coziness, not on gifts.” Now, decades later, Stephanie has made those traditions her own. Far from Denmark, they find expression in the industrial-cool home in Toronto’s Junction neighbourhood that she shares with her husband, Andrew Tomkins, an image retoucher, and their three cats, Fargo, Koya and Oscar.

The 850-square-foot space is on the upper level of a two-storey cinderblock commercial building that was built in the 1970s. For more than 10 years, Stephanie and Andrew waited to convert the dark nondescript space into a bright and airy Scandinavian-style home. In 2016, their vision was finally realized. Thanks to clerestory windows and skylights (not shown) that were tailored to the living area, the space is now flooded with natural light, and the open kitchen and dining area makes the most of a long bank of east-facing windows. “For a photographer, the light in here is a dream come true,” says Stephanie.

How fitting, then, that the couple’s holiday season is a celebration of light. Drawing on Danish simplicity, they turn to the twinkle of tiny white lights and the simple serenity of candlelight for decoration. Time is spent creating handmade gift wrap and getting together with friends. “Everyone’s encouraged to drop in at any time. It’s very relaxed,” she says. “We hang out at the island as Andrew cooks, and then we gather at the dining table. Wine is plentiful, and curling up in the living room for hours of good conversation is one of our favourite things to do here.”

Stephanie describes her decorating style, both during the holidays and year-round, as spare yet inviting. “I call it updated Danish Modern,” she says. Soft blues punctuate the white envelope and warm natural elements – such as wood, sheepskin and linen – provide cozy texture.

The holidays here are all about easy times and fuss-free decorating. “Nobody should end the holidays feeling exhausted,” Stephanie says. “That’s why, for example, we have a faux white tree, as opposed to a real fir. I learned the hard way that three cats and a real tree just don’t mix!” 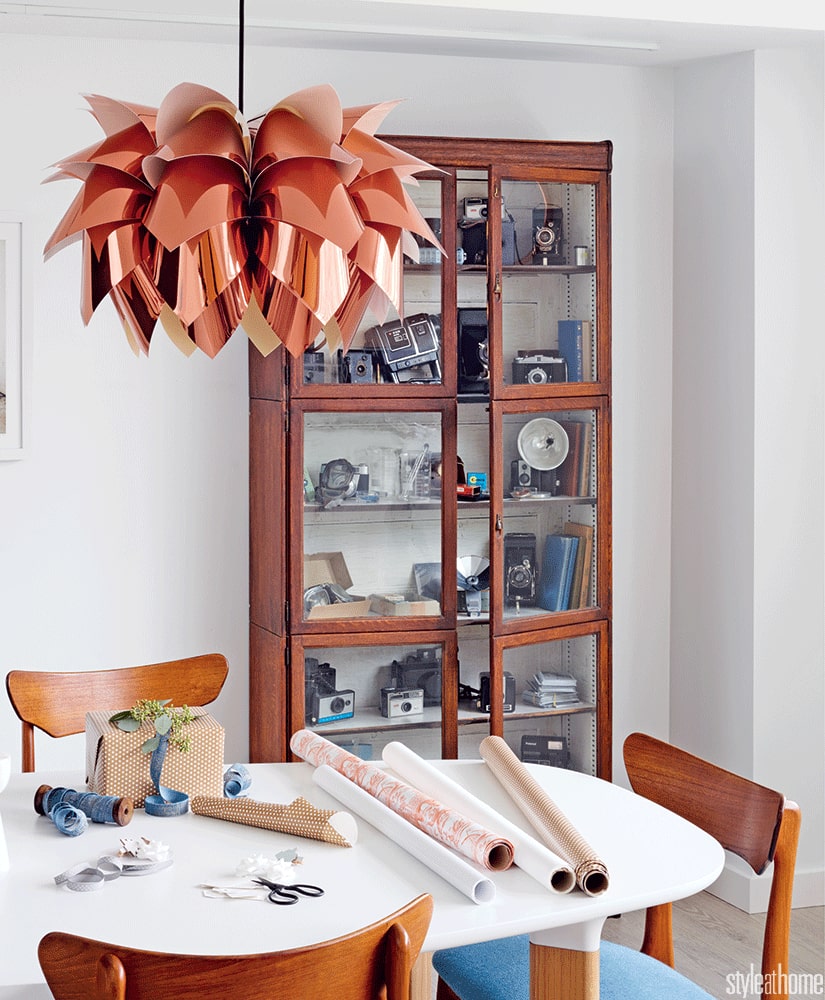 For homeowner Stephanie Kretzschmer, wrapping gifts is a personalized endeavour. “Each gift is different, and I spend all year collecting papers, ribbons and string for the occasion.” Her collection of vintage cameras, displayed in an heirloom wooden cabinet, is a year-round feature of the dining room. 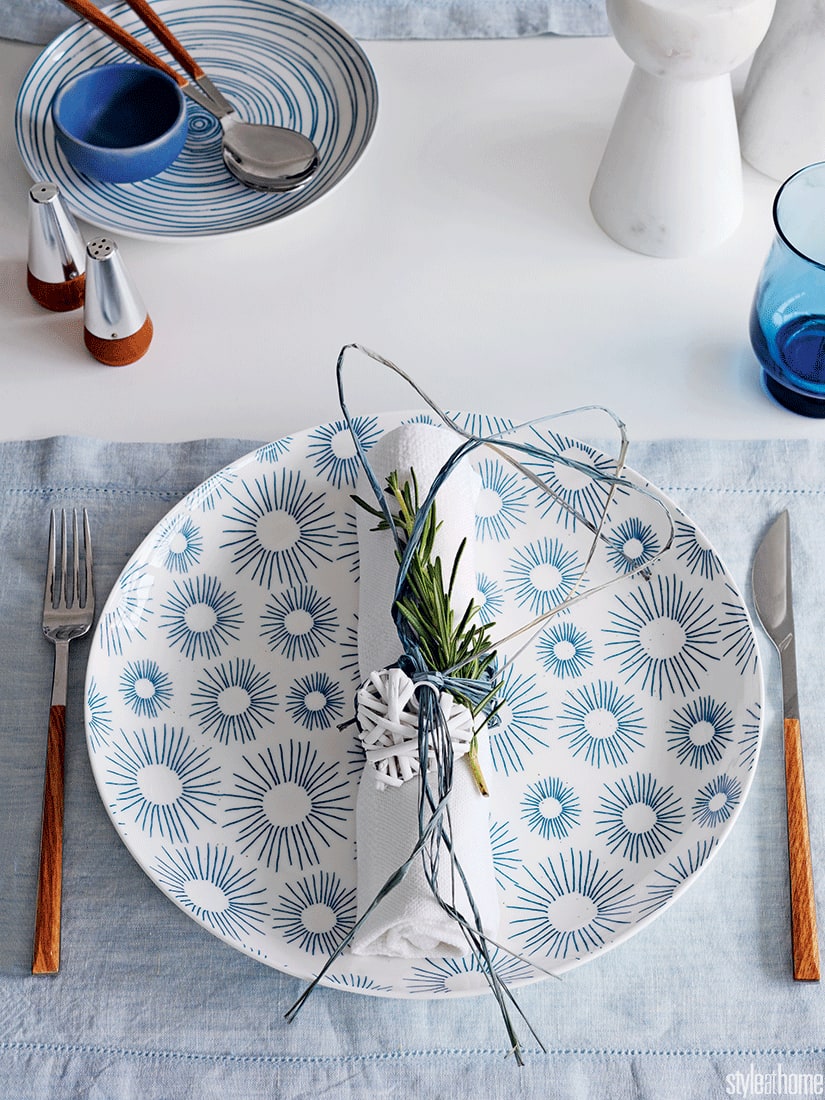 The place settings on the dining table are simple and inviting. Napkins are embellished with sprigs of aromatic rosemary and then tied with dyed raffia and woven heart ornaments. The shades of the modern dishes and tumblers complement the pops of blue throughout. 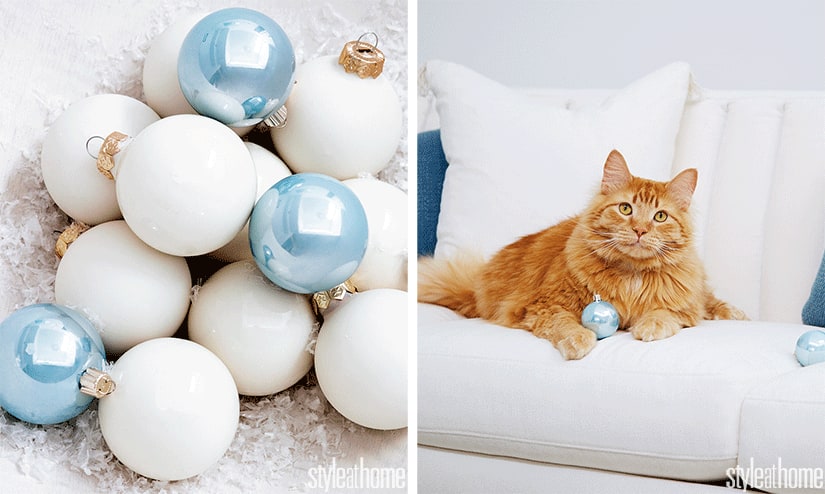 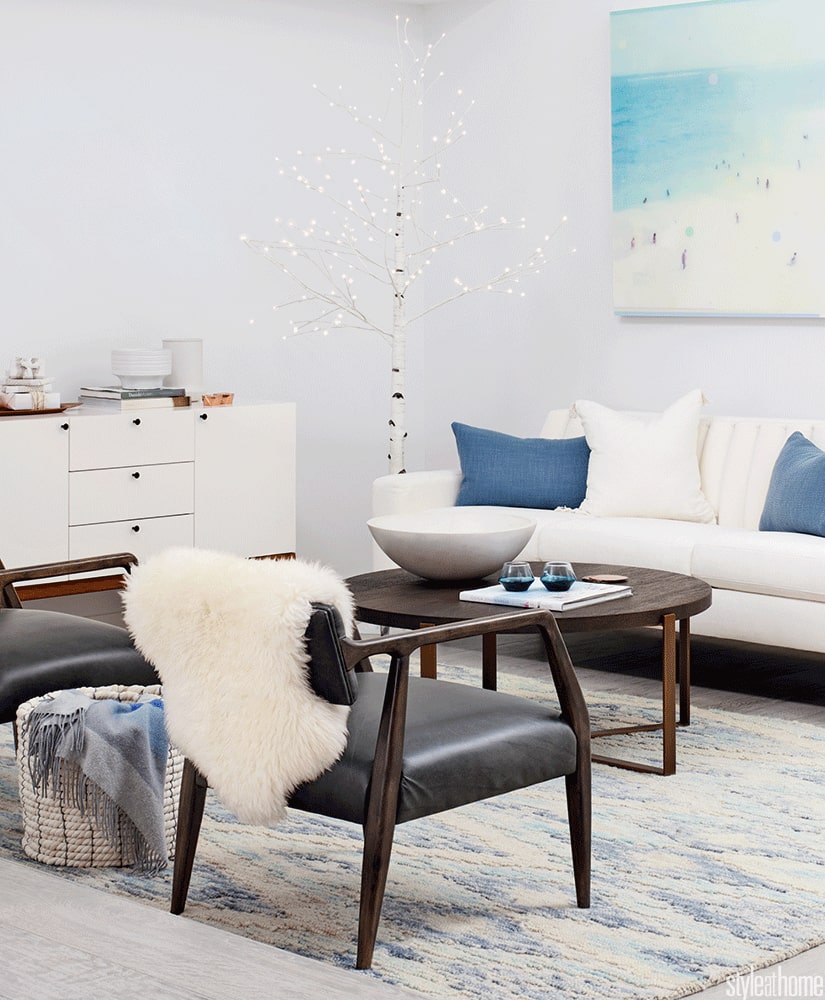 A faux birch tree twinkles, while sheepskin throws, a wool rug and plump toss cushions offer coziness. During the day, clerestory windows and skylights (not shown) let in loads of natural light. “The beach photograph was the inspiration for the room’s palette,” says Stephanie. 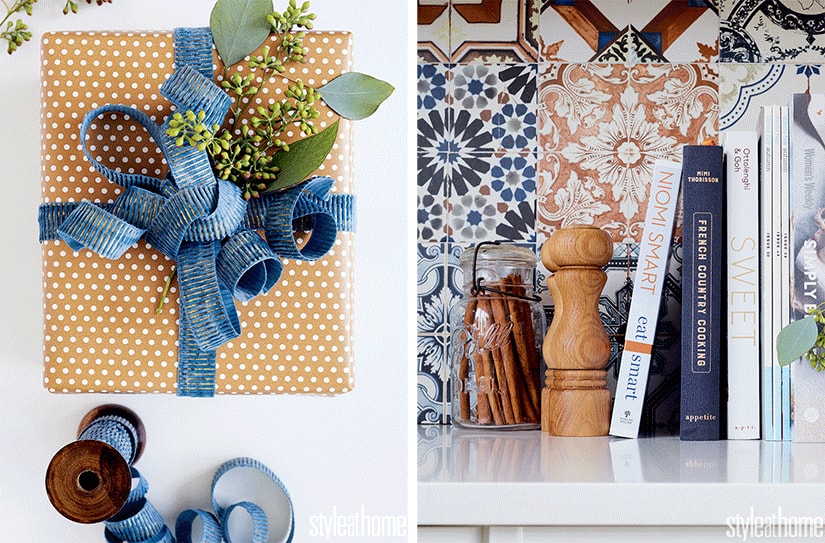 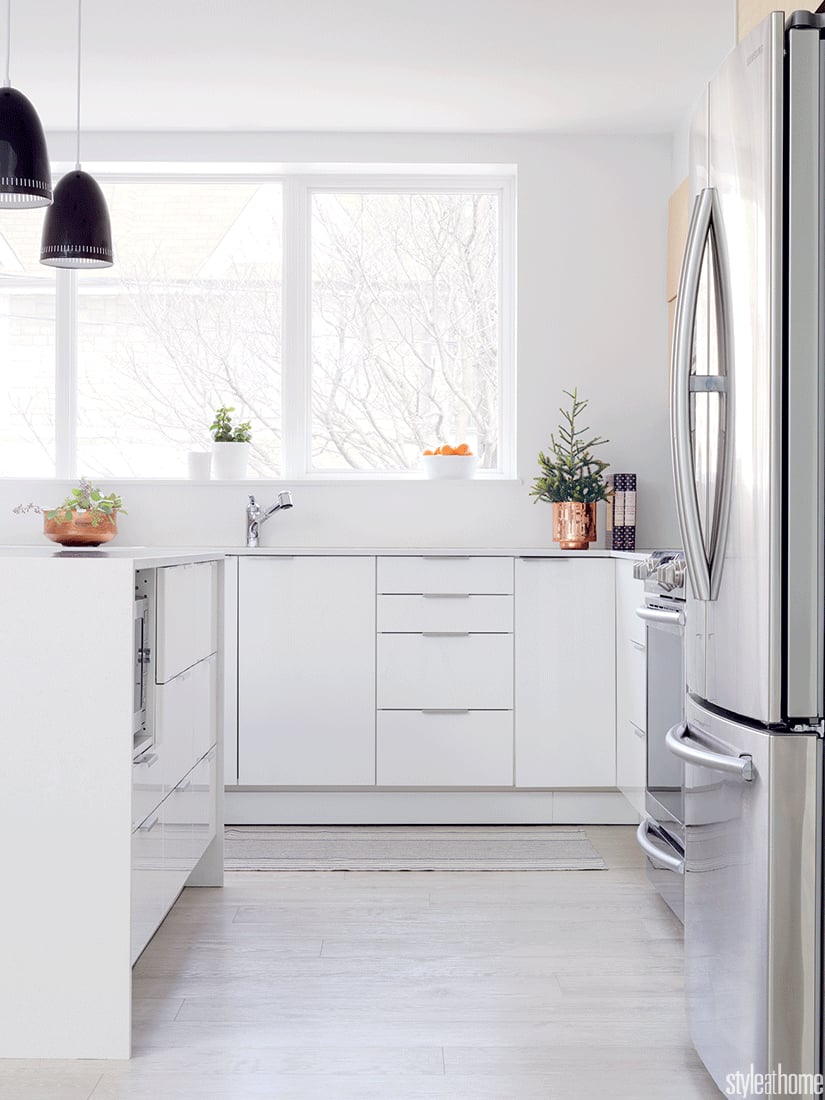 “The kitchen is bright and light-filled thanks to a large bank of windows,” says Stephanie. The space features a mix of high and low materials: Big-box-store cabinetry was combined with custom Baltic birch cabinet fronts and artful Moroccan-style ceramic tiles. 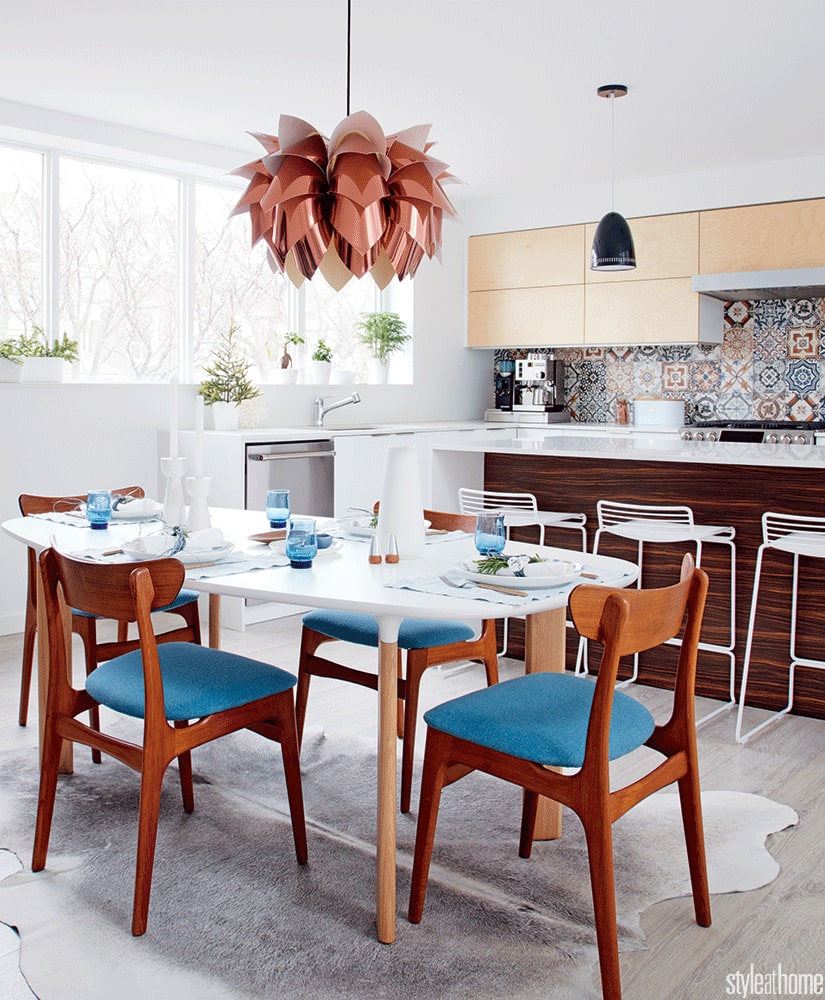 Stephanie grew up with the copper Hans Hoyrup pendant light that now hangs above her dining table. “It’s my most treasured piece,” she says. The wooden chairs were Kijiji finds that the couple had reupholstered. The tablescape is festive and casual – perfect for relaxed meals. Linen placemats and marble candlesticks lend luxe texture. 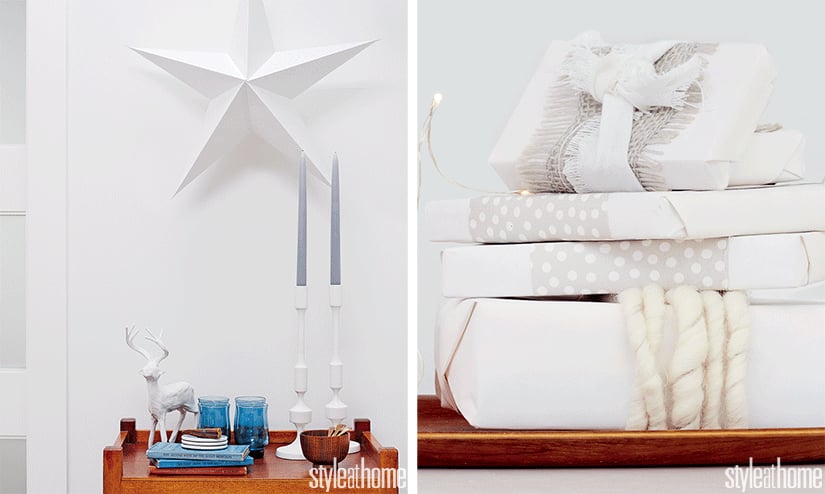 “In Denmark, folded paper stars like this one are a traditional winter decoration,” says Stephanie. The same goes for lots of candlelight. 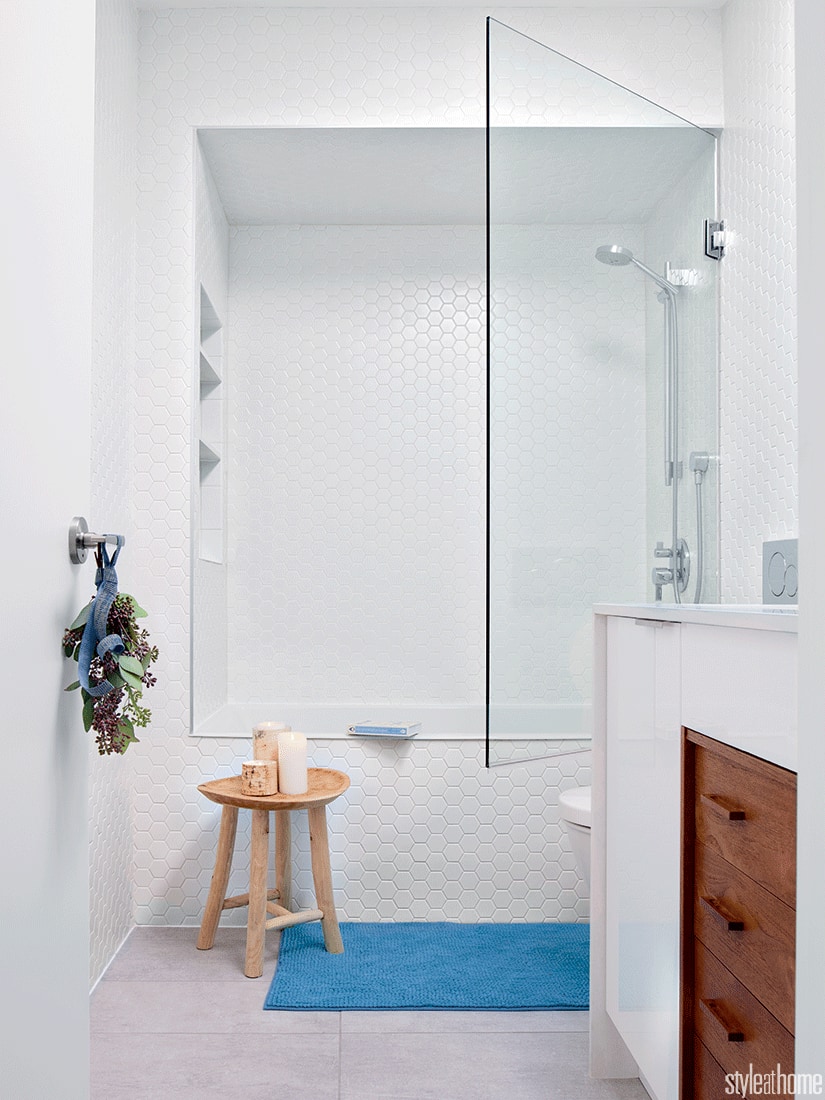 Slipped over doorknobs throughout the house, sprigs of greenery tied with ribbon are a nod to nature. The bathroom walls are covered with white hex tiles, and the space is warmed up with hits of wood. 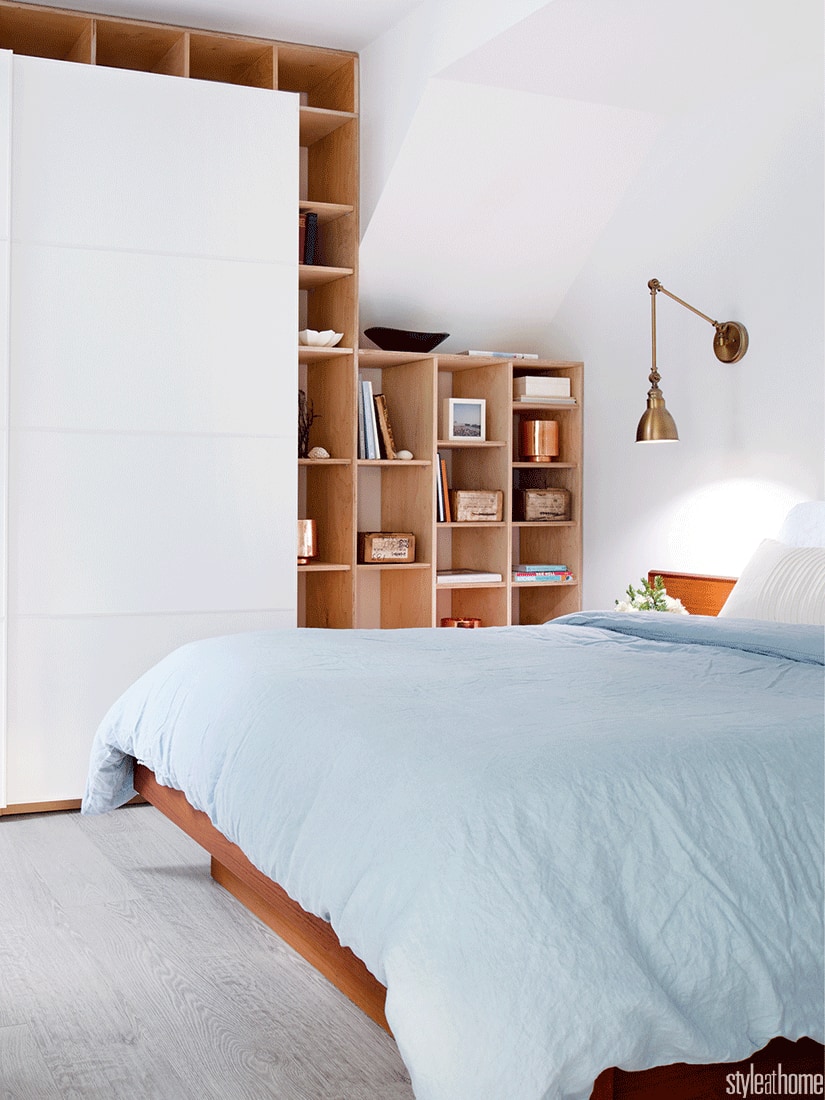 Forget the cacophony of colour that usually comes with Christmas — this muted scheme still feels merry and bright.

Subtle whimsical elements dress up a cozy home for the holidays