Thanks to a designer’s masterful eye, this modest modern kitchen serves as a lesson in making the most of the space you have.

If not precisely planned, a tiny kitchen can lead to chaos of all sorts: appliances dominating countertops, overstuffed cabinets that barely shut, even cookware stashed in the oven. The trouble with this Toronto couple’s 235-square-foot cooking quarters came down to its awkward U-shaped layout, which divided the kitchen into two distinct zones: a prep area and an eating nook. 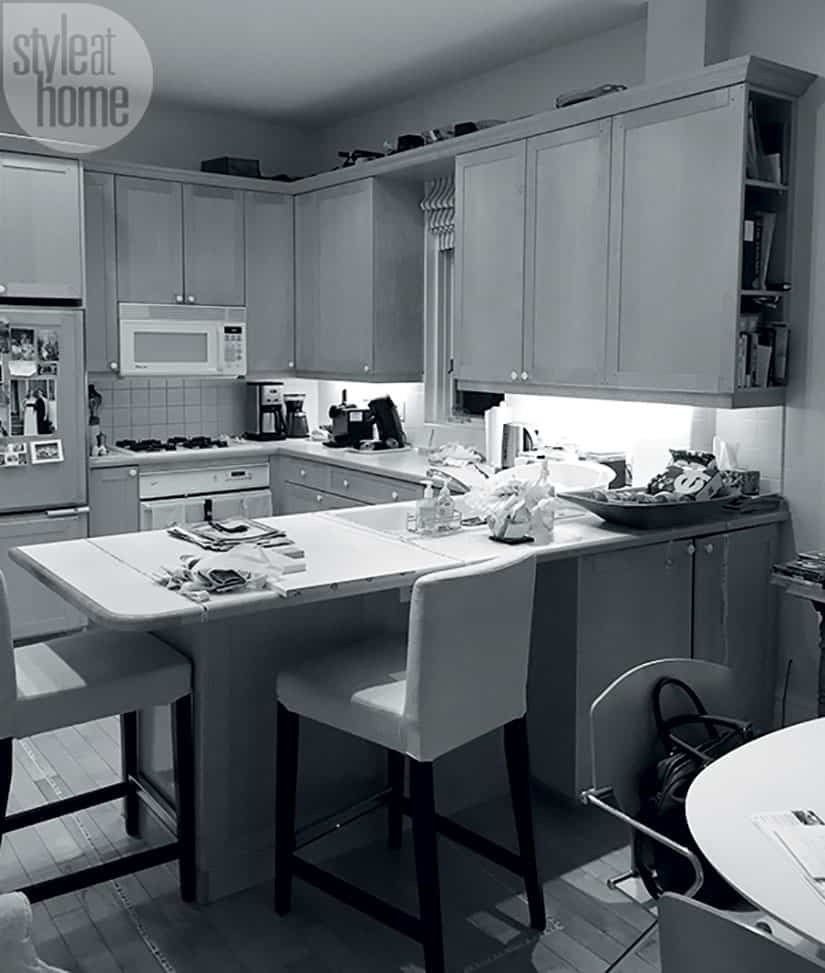 Desperate for a revamp, the pair called on interior designer Veronica Martin to conceive a refreshingly bright and modern space with hard-working elements. “The homeowners wanted to take back their kitchen and set it up to suit their everyday lifestyle,” says Veronica. So she worked her magic and made it happen.
Here, we reveal eight designer-approved tricks for making a small kitchen thrive. 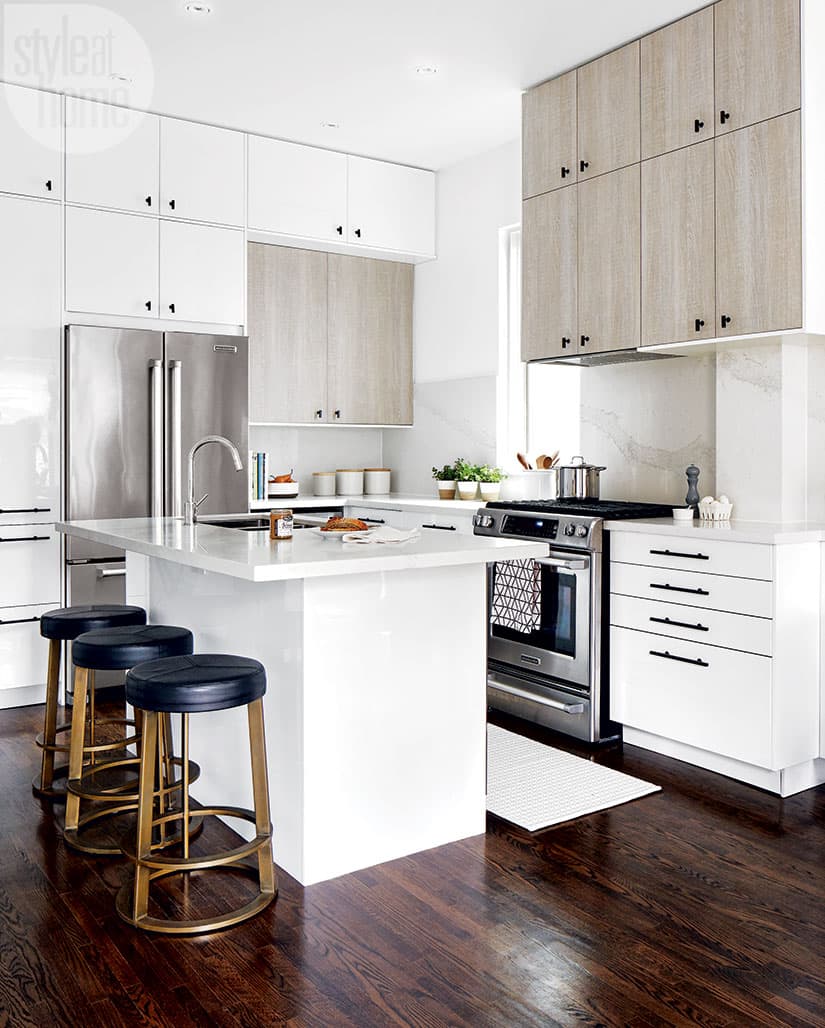 To maximize the kitchen’s storage capacity, Veronica traded in awkwardly positioned uppers for glossy white and oak-look cabinetry that extends to the ceiling. “The original cupboards left all this untouched space above them, so it was important to reclaim that and take advantage of the 10-foot-high ceiling,” she says. The homeowners now use the extra storage to stow away off-season items and other specialty kitchenware. 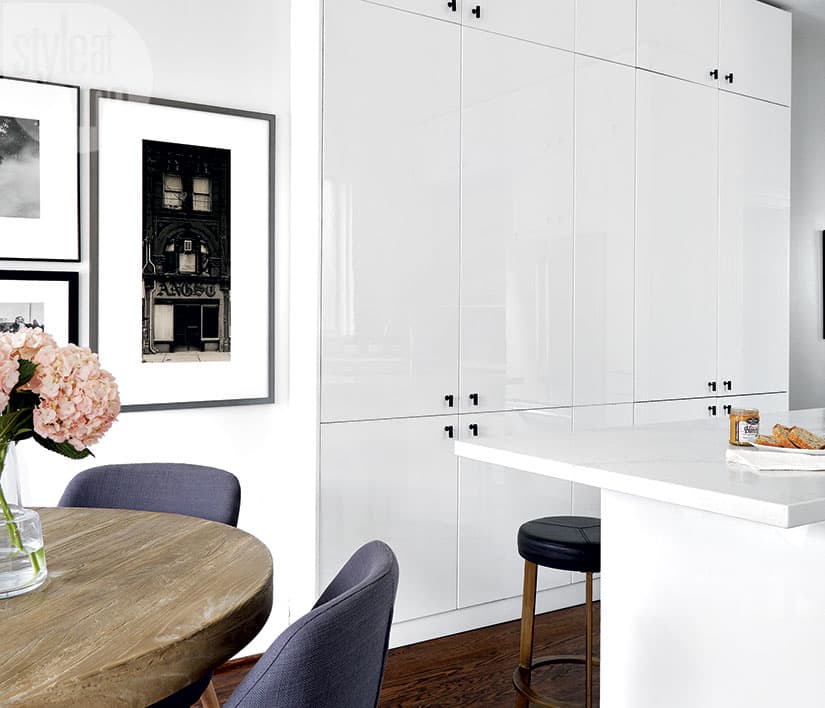 The pre-reno space featured a pantry that protruded into the nearby hallway. “It resembled a front hall closet and felt very removed from the kitchen,” says Veronica. So the designer got creative. To better incorporate a new pantry into the room, she had custom floor-to-ceiling cabinetry installed in the same spot and then had matching fake doors added to the bump-out wall directly beside it. The clever addition looks like a large unit that was always part of the kitchen.

Though 24-inch-deep cabinets constitute the majority of this kitchen’s storage, Veronica chose to recess the doors above one countertop to add depth and function, ensuring the prep surface is accessible. Incorporating whitewashed-wood-look doors also lends warmth to the predominately white space. “All-white kitchens can come off as cold,” she says. “Introducing wooden elements is one of the best and easiest ways to increase interest.” 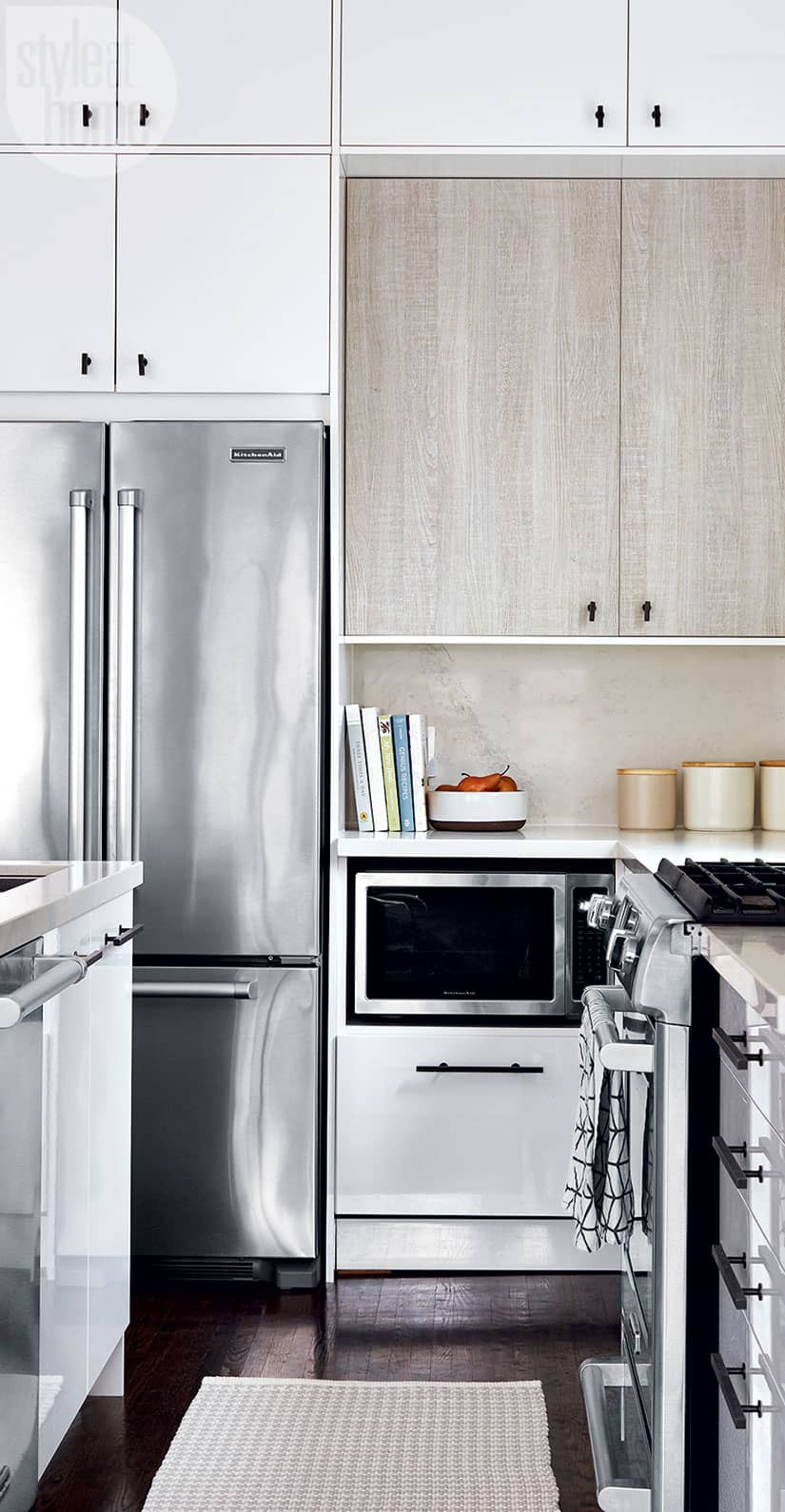 Instead of limiting counter space to the kitchen’s cooking zone, the designer had sleek quartz countertops installed along an entire wall, extending into the eat-in area. “This design choice reinforces the idea that it’s one integrated space,” she says. The shallow countertop underneath the TV also acts as a sideboard thanks to the built-in cupboards below, where the homeowners store everything from formal dishware to electronics. 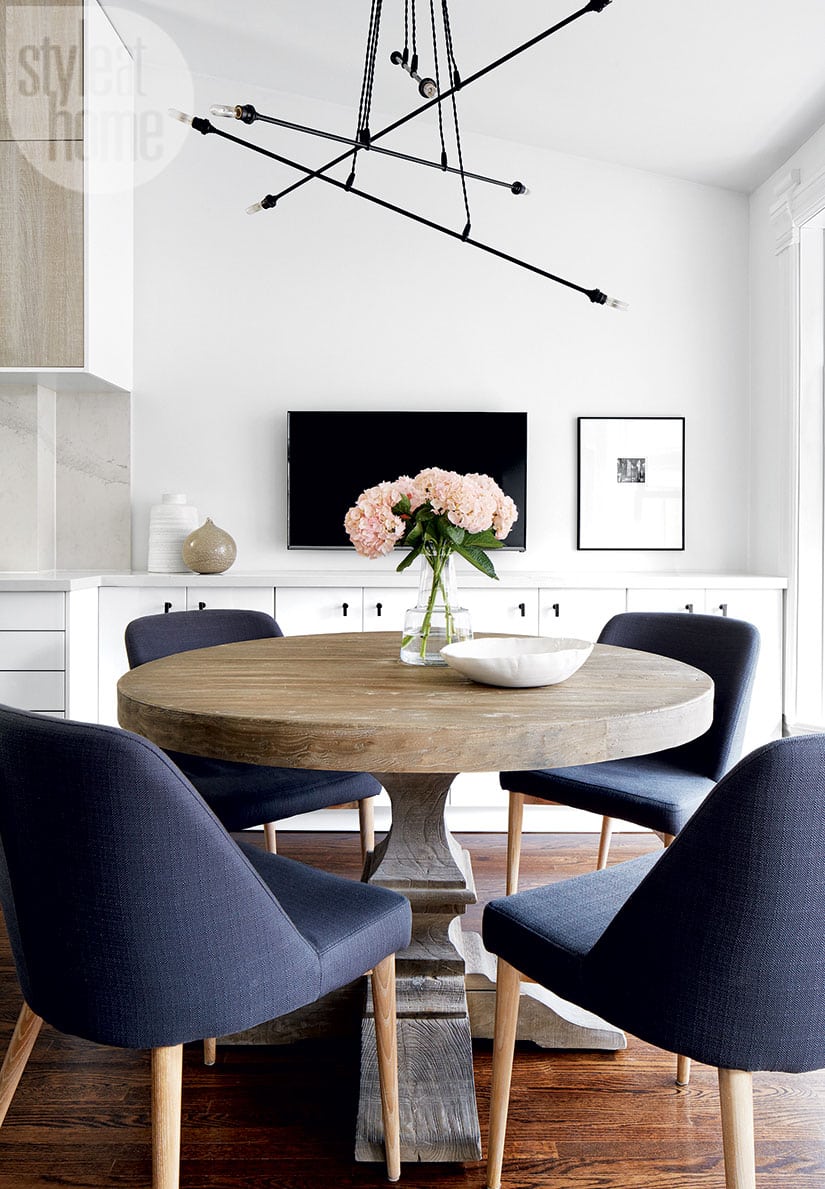 The kitchen’s eating nook is one of the most well-loved spots in the home. It’s where the couple sips coffee every morning and retreats after a long day. Keeping this in mind, the designer didn’t want to be constrained by choosing only compact furniture. She instead used large cushioned dining chairs that “encourage the homeowners to stay longer,” she says. The round aged-elm dining table balances the look and is easy to navigate around. 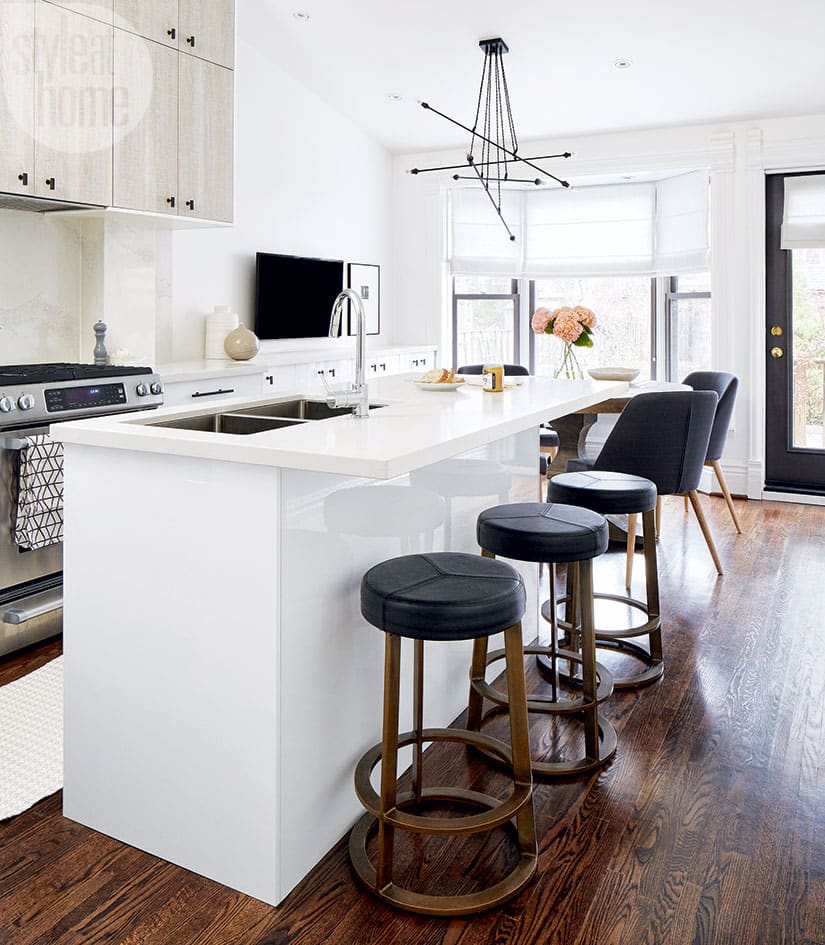 The original U-shaped kitchen layout impeded traffic flow and separated the cooking hub from the eat-in area. The new linear layout boasts a modern free-standing island equipped with an undermount sink, which allows the couple to move around and entertain guests with ease while cooking.

While outfitting the small space, Veronica was careful to create cohesion. The existing maple flooring was swapped out for the same stained oak that’s carried throughout the rest of the main floor. The new accent cabinetry mimics the look of the dining table. Even the cabinetry hardware mirrors the chandelier’s black framework. These repeated decorative details ultimately tie the room together.

"I wanted there to be huge visual impact when you entered the kitchen, but I also didn't want to compromise the view to the backyard garden," says the designer of her decision to add the stick-like chandelier to the eat-in area. "It was important for the light fixture to bring something unexpected to the space," she adds. "A drum shade, for instance, would have fallen flat. It would've been too predictable."