Style and substance converge in this dreamy kitchen fit for a couple of foodies.

There are too many cooks in this kitchen. Two to be exact: exhibit designer Neil Asselin and his partner, John, who recently developed a knack for baking. Snoop inside the pair’s packed-to-the-hilt knife drawer, and you’ll know they mean business. “Everything we make tends to be a big deal, from salad to coffee to cocktails,” says Neil with a laugh.

It’s no surprise that it took the couple five years to find a house with a kitchen that showed potential. The winner: a 1,600-square-foot Cape Cod-style home located in Aurora, Ont. They renovated the entire 1940s abode over six months, paying special attention to the kitchen, “which was designed with function in mind,” says Neil.

Out went the original, with its antiqued yellow cabinets that had fussy panelling and an overall clunky appearance. “Everything felt dark and over-decorated,” says Neil, who gravitates toward a clean and architectural aesthetic. Neil’s serene design is grey and white, and uses cabinetry that boasts hidden storage. “The new kitchen feels fresh and modern but respects the era of the house,” he says, referring to vintage-look touches, such as the enamel schoolhouse-style light fixtures, polished nickel cabinetry hardware and butcher block-topped island. “We call it a kitchen work table. Its design is based on something you might see in an Edwardian manor or country home like the one on Downton Abbey.”

Neil ramped up on the professional appliances, added a peg rack and made sure to accommodate ample counter space for food prep. He also eschewed upper cabinets for an unobstructed, airy feel.

Bigger structural changes that dramatically altered the kitchen included adding a mud room, as well as flattening a cathedral ceiling that was originally beyond the peninsula in order to build a balcony on the second floor. “It sounds counterintuitive, but by lowering the ceiling to match the rest of the kitchen, the room feels larger and more open,” says Neil. He also replaced a window with full-height industrial-look French doors. Doing so allows the couple to indulge in what they do best – cook, wine and dine – indoors and out. “The floor plan is better because we now have direct access to the barbecue and garden from the kitchen,” says Neil. And, hopefully, there are no squabbles over who gets to man the grill! 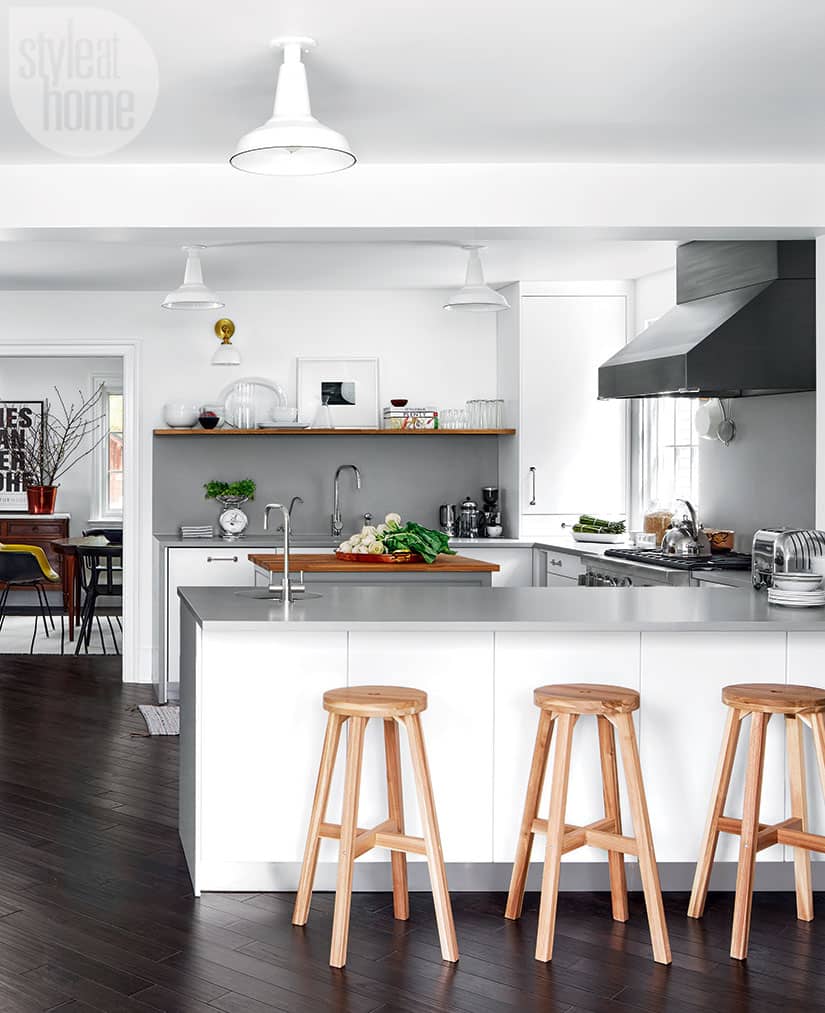 A continuous Caesarstone countertop replaced an awkward peninsula in the open and bright kitchen that exhibit designer Neil Asselin shares with his partner, John. The simple wooden stools are perfect for casual meals and chatting with the chefs. 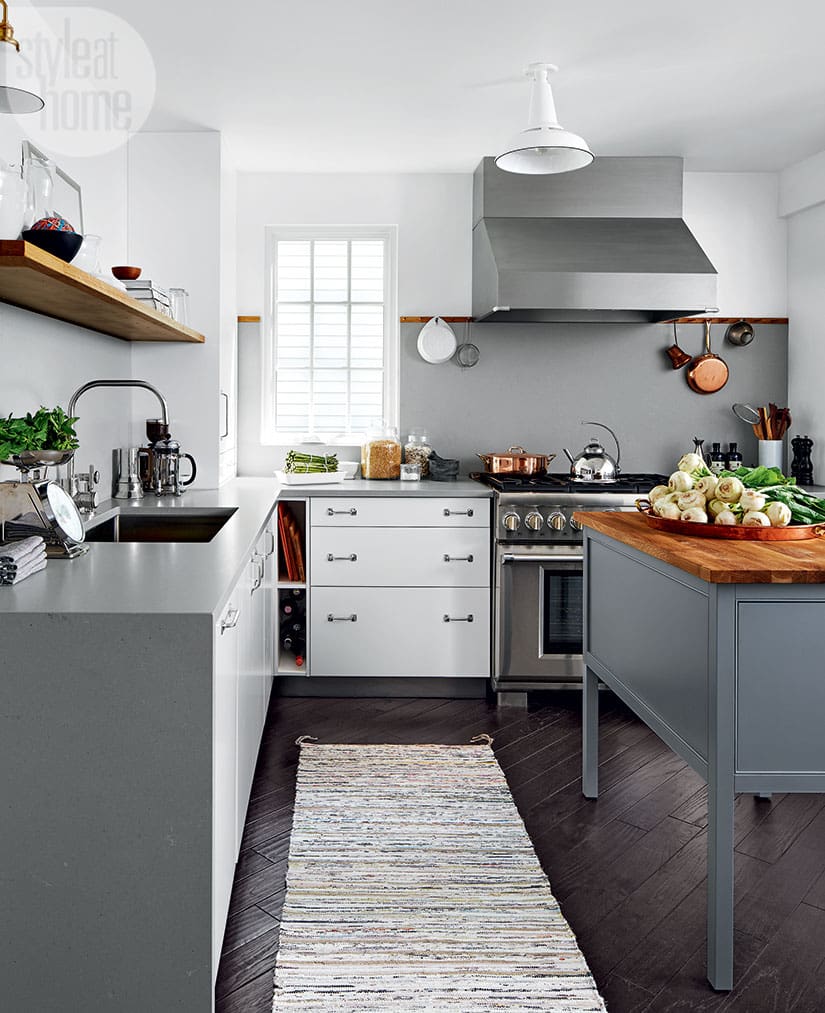 A floating shelf, seamless countertop and wide walkways impart an uncluttered modern feel in the luminous kitchen. “The window had been drywalled over,” says Neil, who opened up the wall so natural light could flood the space. 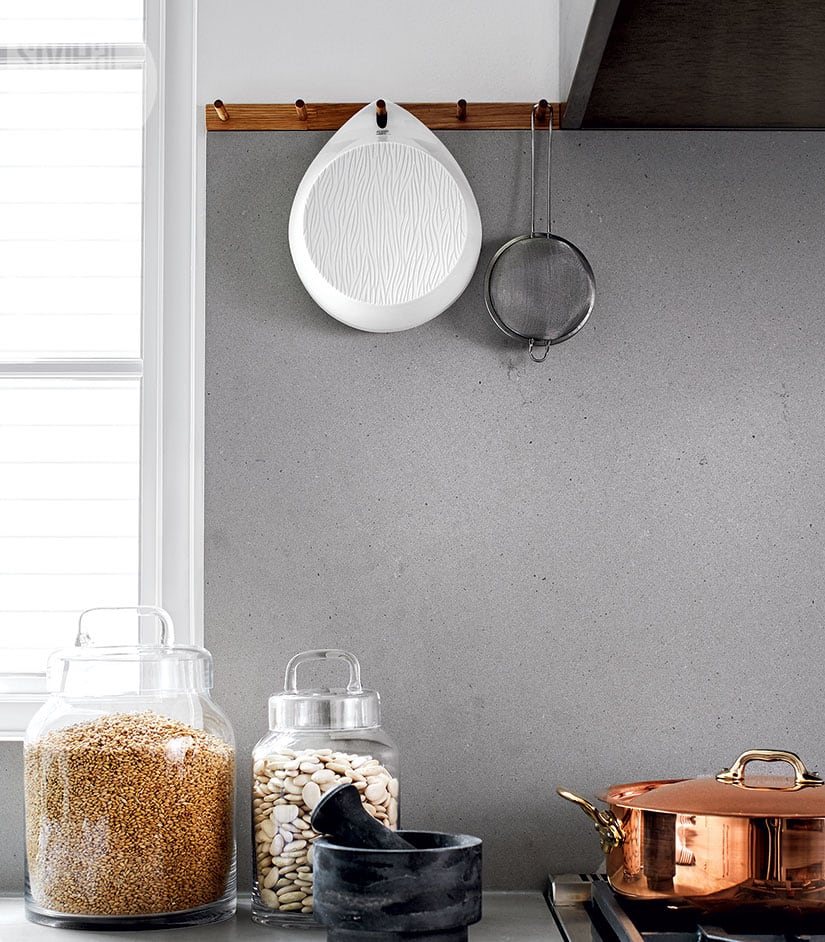 The peg rack was made out of leftover oak butcher block from the shelf and separates the backsplash from the wall above it. 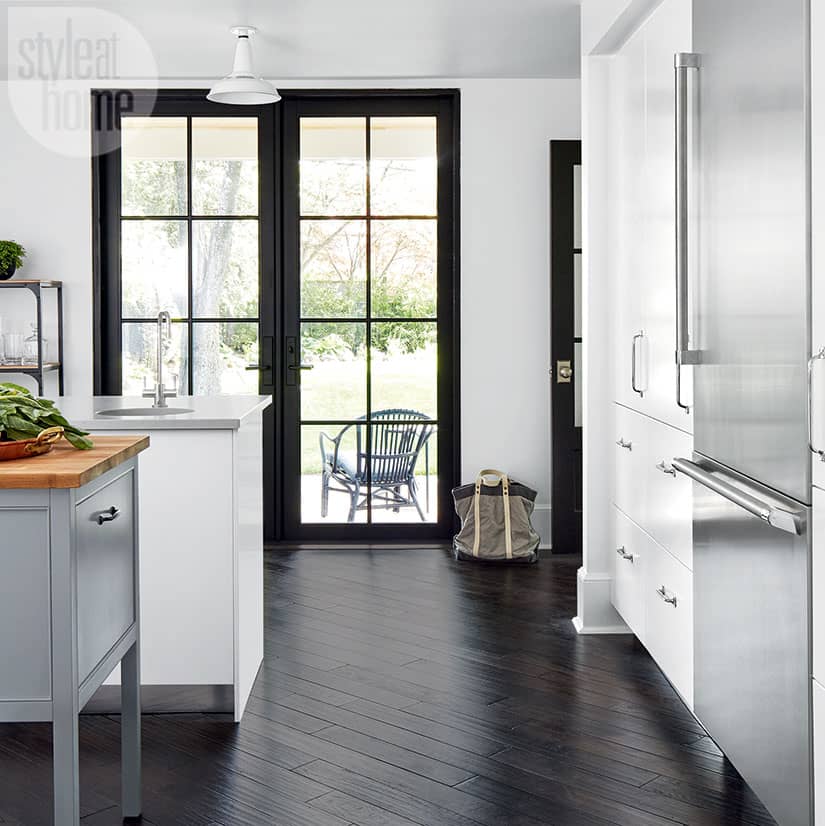 The pre-existing oak floors lead to the south-facing garden, which is equipped for alfresco feasts. The factory-style doors influenced the overall design of the house. “All of our interior doors are black as a result,” says Neil. 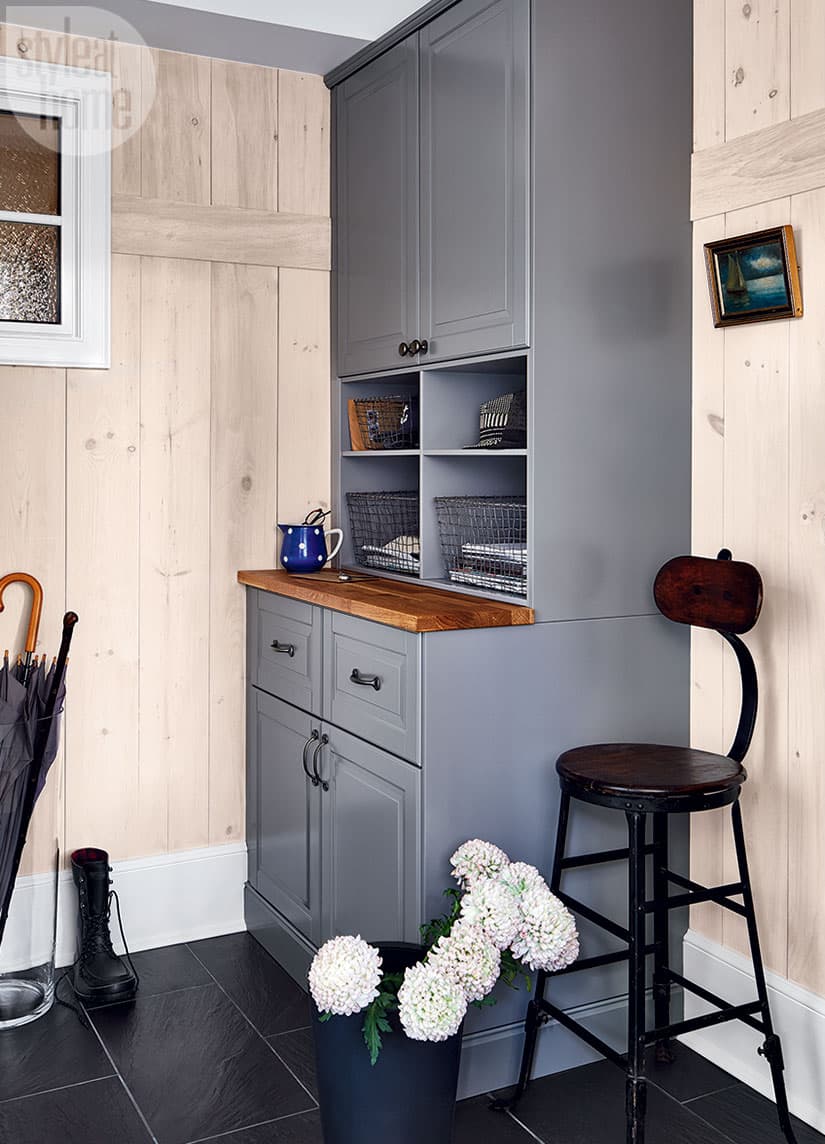 The cabinet in the mud room is a catch-all for mail, cold-weather accessories and dog essentials. “I like to have an organization system, so we’re never looking for our keys,” says Neil. 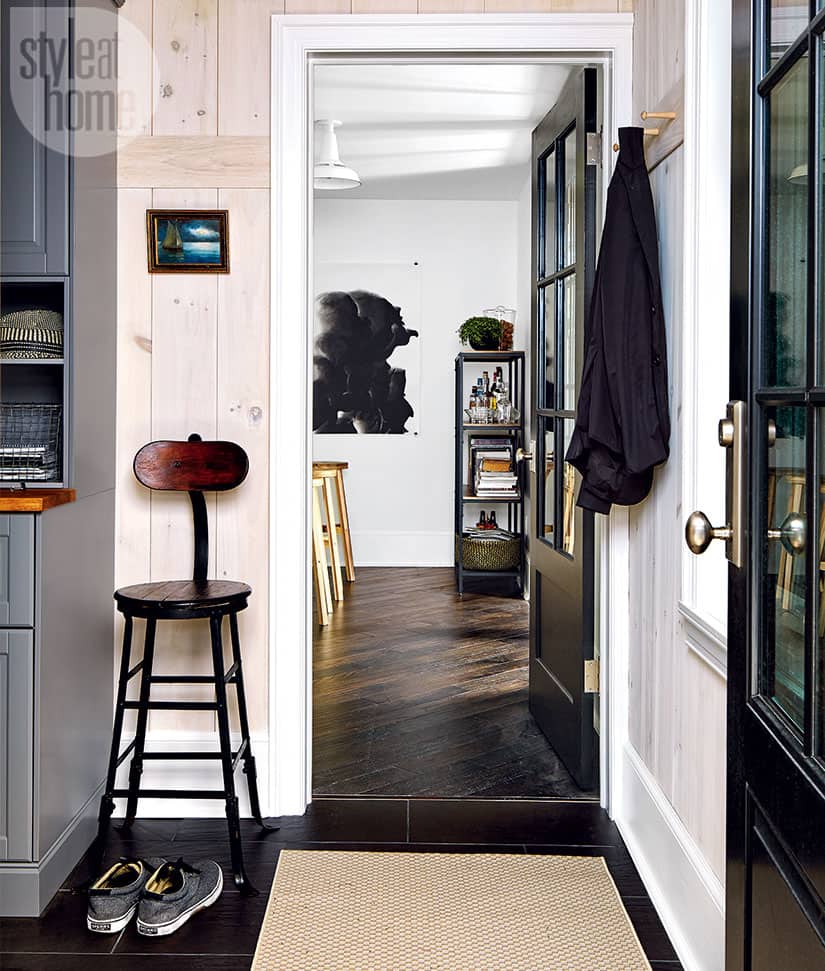 Neil created the mud room as a transition space between the kitchen and outside. The floors are durable black slate, and the unfussy panelling is white pine. “We wanted space to hang our coats and clean up the dog,” he says.

A modern kitchen with vintage-look touches